Despite the statements made by President Joe Biden, there has been no resolution to the issues facing California’s maritime ports.

On the specialist site Frightwaves, Greg Miller explains that the fall in the number of vessels lining up to enter the Californian ports is solely down to a new restriction that is forcing them to drop anchor further out to sea. The problem of bottlenecks has not been solved, it has simply been moved!

Meanwhile, the Chinese authorities have just significantly increased their port duties, by 10% on average.

The hike in the costs of transportation, coupled with the explosion of energy prices, is, in turn, fueling inflation in the cost of foodstuffs.

The inflation is now spreading to all agricultural products. 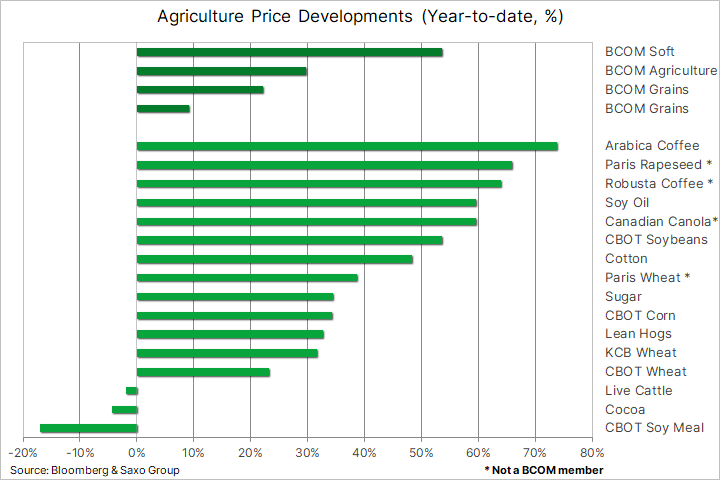 The process is showing no signs of stopping.

Last week, the price of fertilizers reached a record high. 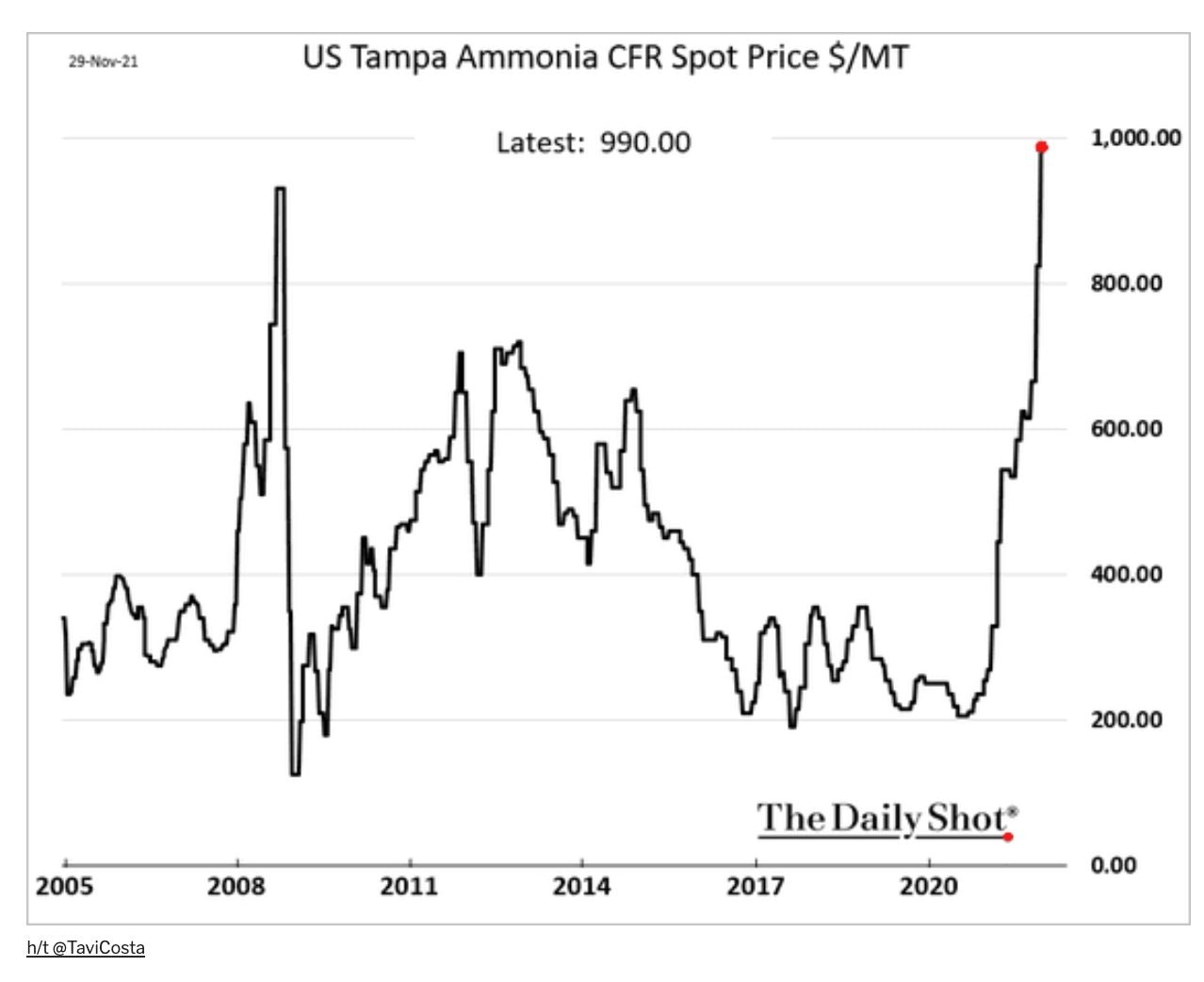 This explosion in the price of fertilizers tells us that there is an even more spectacular hike coming soon in agricultural commodities, which are heavily dependent on the use of these fertilizers.

Let us take a look at the chart for the Invesco DB Agriculture Fund, which provides a good indication of how agricultural prices have evolved since 2008. 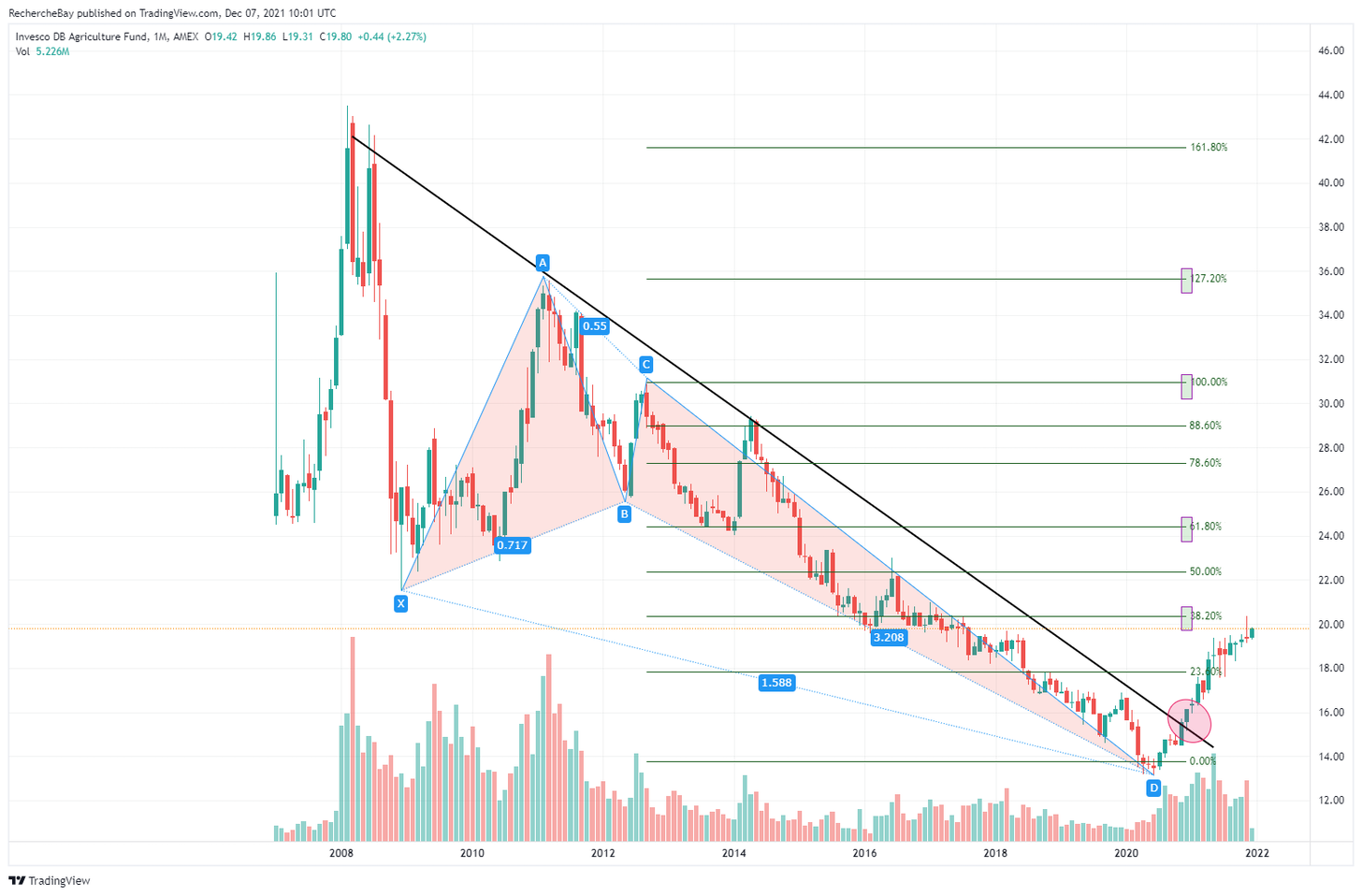 The index has emerged from its bearish trend at the start of the year and recently hit its second bullish target in a very long ‘Crab’ harmonic pattern. The index’s overbought position ought to lead to a consolidation in the short term, but there are still three targets left that are far higher for the year 2022. These higher levels would correspond to a knock-on effect from the hike in the price of fertilizers observed today.

This general price rise is being accompanied by a net recovery of activity in the United States. The Fed is anticipating that U.S. GDP will be in the region of +10% next year. 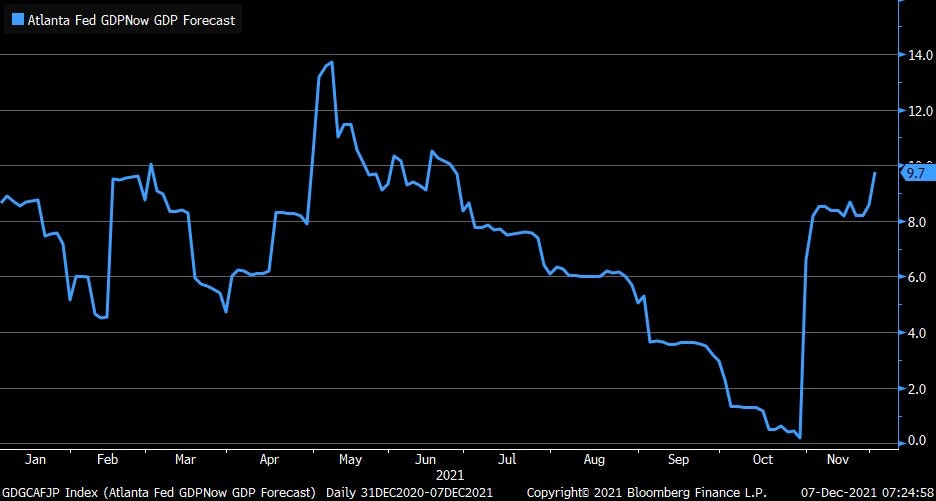 A recovery in activity, soaring inflation.... in these conditions, how can one justify the maintaining of an expansionist monetary policy that would keep this inflation going?

The activity, even though it has risen in recent weeks, remains completely uncorrelated with the excessive valuation of the markets. One can see this by comparing the SP500 and the index for goods transported by truck in the United States. 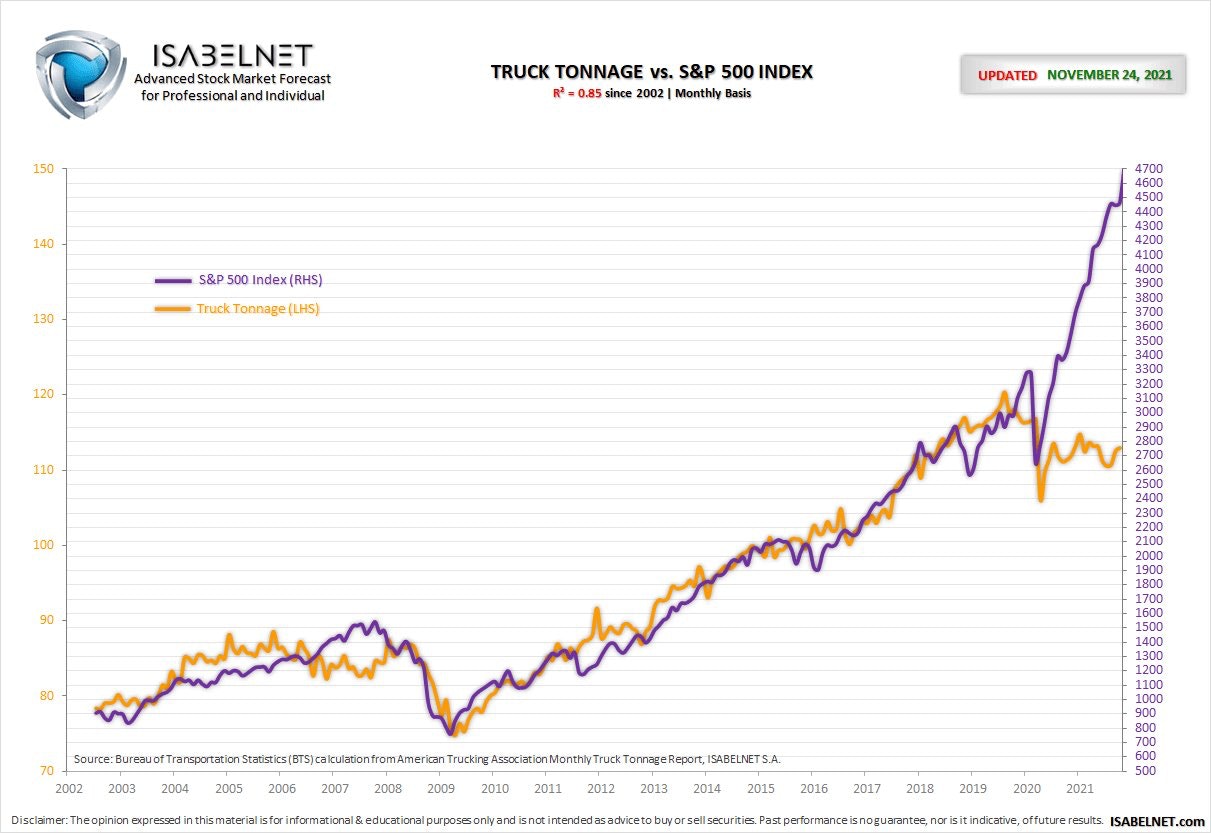 This can be measured above all by looking at the valorization of the technological sector.

The values in this sector are at even more insane levels than at the time of the last bubble, in 1998-2000: 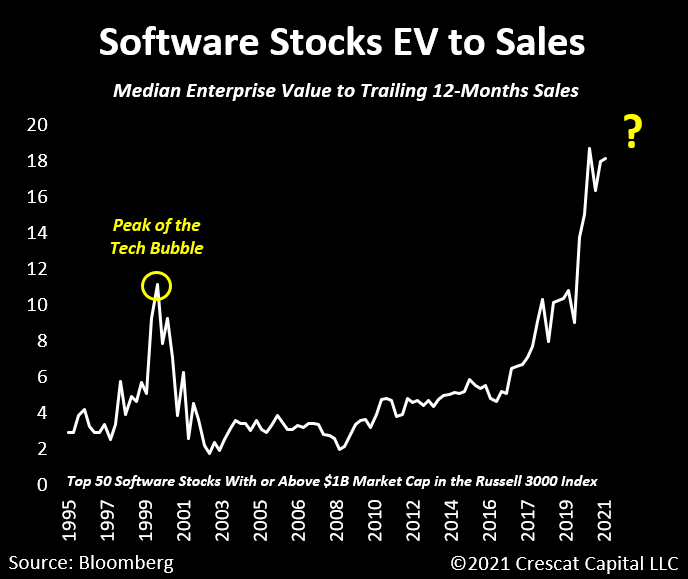 The ‘bubble’ values of these growth businesses are being kept at stratospheric prices thanks to financial operations on their stocks, rather than on their actual revenues.

IBM, for instance, has bought up $132 billion of its own stocks over the course of the last 20 years. The company’s stock market capitalization now stands at $113 billion... 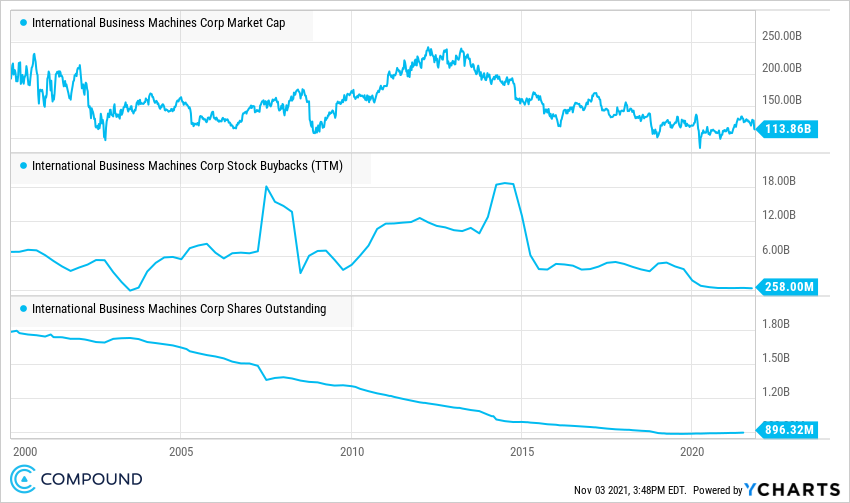 According to Bank of America, businesses’ revenues have only accounted for 21% of the rise in the value of their stocks since the financial crisis (as opposed to 48% prior to 2008). 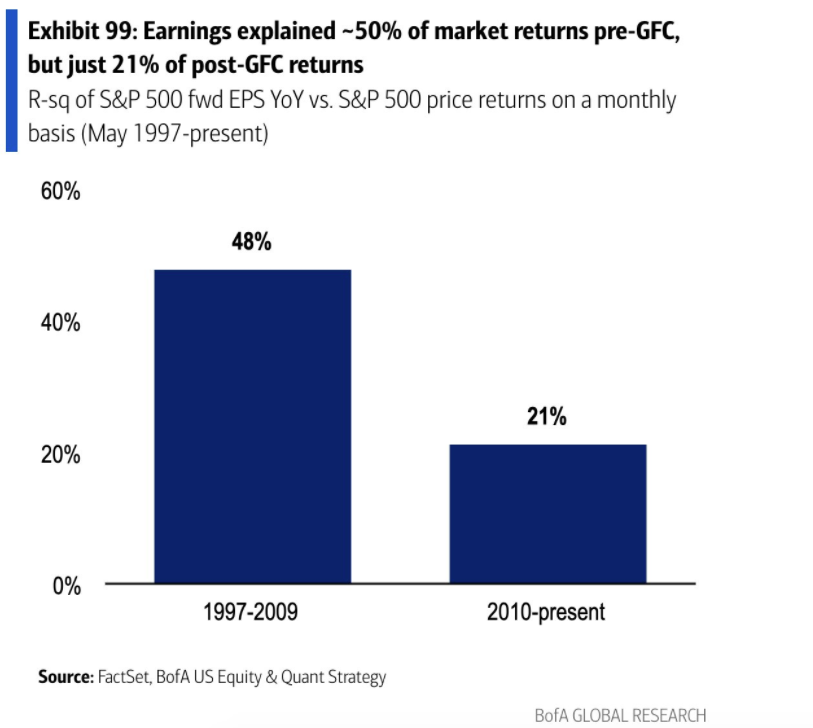 In other words, without this financial ‘engineering’, the value of the market as a whole would be far lower.

These accounting tricks were only able to be used thanks to the central banks, which have made money free and led capital allocations in speculative sectors.

In other words, the Fed has inflated the bubble in the markets.

Bank of America estimates that the increase in the Fed’s balance sheet is directly responsible, at a level of 52%, for the rise in the markets since 2008. 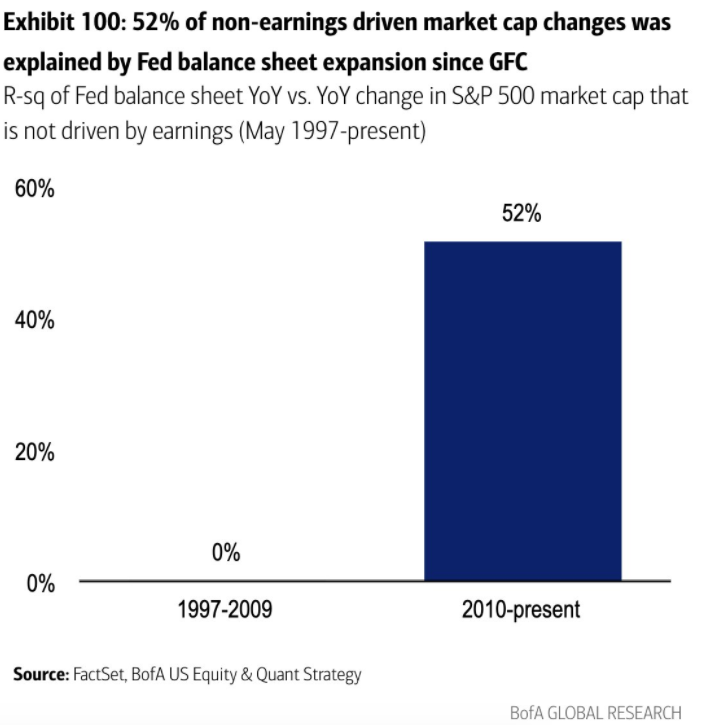 Is the Fed going to keep on making this bubble bigger?

There is nothing to stop it continuing to increase its balance sheet indefinitely. Except that today, the inflation is making its task more complicated.

Generally speaking, with the rise in inflation, the real yields of the stocks on the SP500 are no longer providing sufficient remuneration, and this obviously raises concerns with regard to the exposure on these financial instruments. 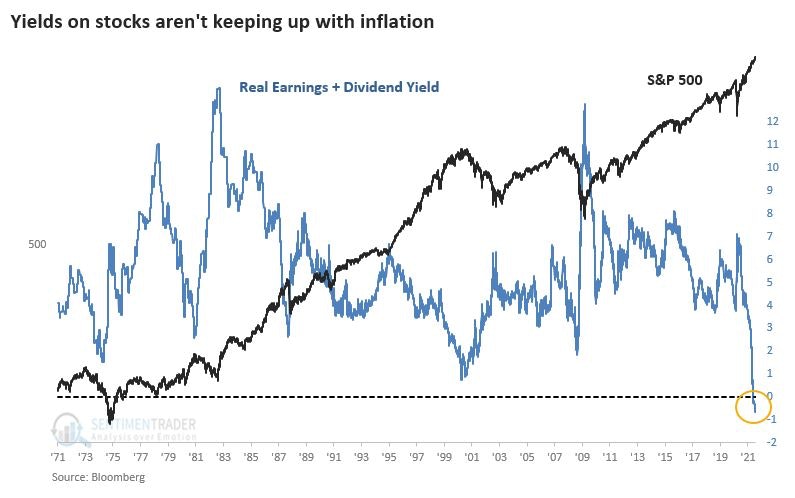 The markets are too expensive...but they are no longer providing good returns due to the inflation!

An additional problem: if one looks at the level of the leverage effect, the U.S. equity accounts have never been so fragile in the face of a correction.

Not only are the markets expensive and providing poor yields, but they are also very fragile, precisely because of this recent explosion in the margin accounts.

In this context, we have seen record sales of $70 billion on the part of CEOs and insiders since the start of this year.

These sales have accelerated in the technological sector, as well, as attested to by the movement of the balance of the ‘star’ ARKK fund, which brings together the sector’s best-known ‘stories’. 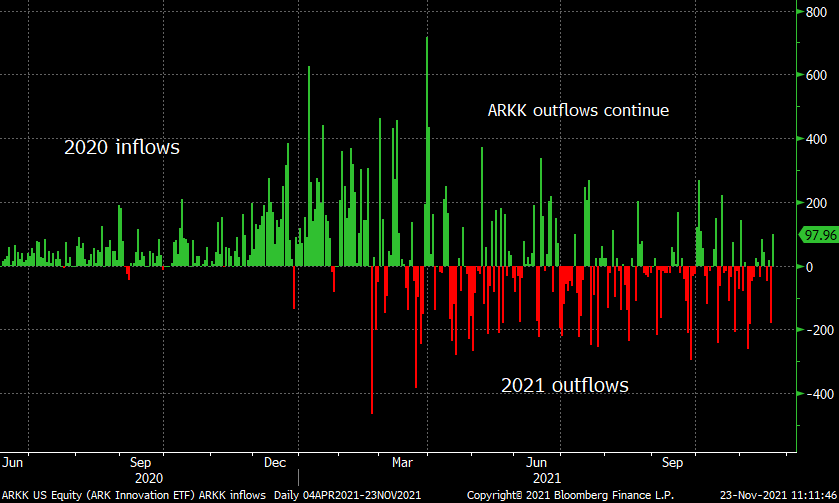 Insiders are selling and the number of new margin accounts is skyrocketing, at a time when the markets have never been so expensive and fragile. Fear is well and truly present here...but so too is confidence. And it is this confidence that is dominating the markets' sentiment.

The central banks’ ability to sustain the current valuation is the last bastion that is keeping the markets at these levels.

This mark of confidence is unquestionably an advantage in the current monetary policy.

The history of currencies shows us that if inflation lingers, it erodes this confidence.

It is in these phases of losses of confidence in the monetary policy that gold really rediscovers its appeal for investors. The gold price soars in relation to a currency when the market decides that the central bank can no longer do anything to counter the inflation and to defend the value of the currency that it issues.

Gold takes off when a central bank goes running after inflation without being able to stop it...