In my previous special mining bulletin, I mentioned the consequences of last week's British bond crisis which forced the BoE to intervene in a hurry to avoid a cascade of pension fund bankruptcies:

"There are decades where nothing happens, and there are weeks where decades happen." This quote from Lenin could very well illustrate the crazy days we are experiencing. These events are not covered enough by the traditional media: the ongoing bond crisis almost caused a panic in England last Wednesday. Without the intervention of the Bank of England in extremis, many pension funds would have bit the dust. As usual, we discover at the last minute the fragility of the arrangements used by these funds, which used very risky financial engineering to ensure a decent return by means of highly leveraged derivatives. With negative rates, it was almost impossible to offer a sufficient return. The monetary policy of the last twenty years, which has been to suppress the cost of money, has forced these funds to take on more and more risk. And when rates rise sharply, as they have today, these derivatives explode in flight, forcing these same funds to sell assets in violent margin calls. These massive sales accelerate the fall of the markets and push more and more funds into even more severe margin calls.

This week, let's explore the risks of contagion from this bond crisis.

The current situation is worse than in 2008... yet, there is very little chance that it will unfold like in 2008. This time, the banking sector seems to be less impacted, at least at first, because protective tools are put in place in the famous systemic banks that must be protected at all costs for the financial system to resist (the famous Global Systemically Important Banks or GSIBS).

Let's try to detail all this.

To begin with, why is the situation worse than in 2008?

First, the level of global debt is even higher: 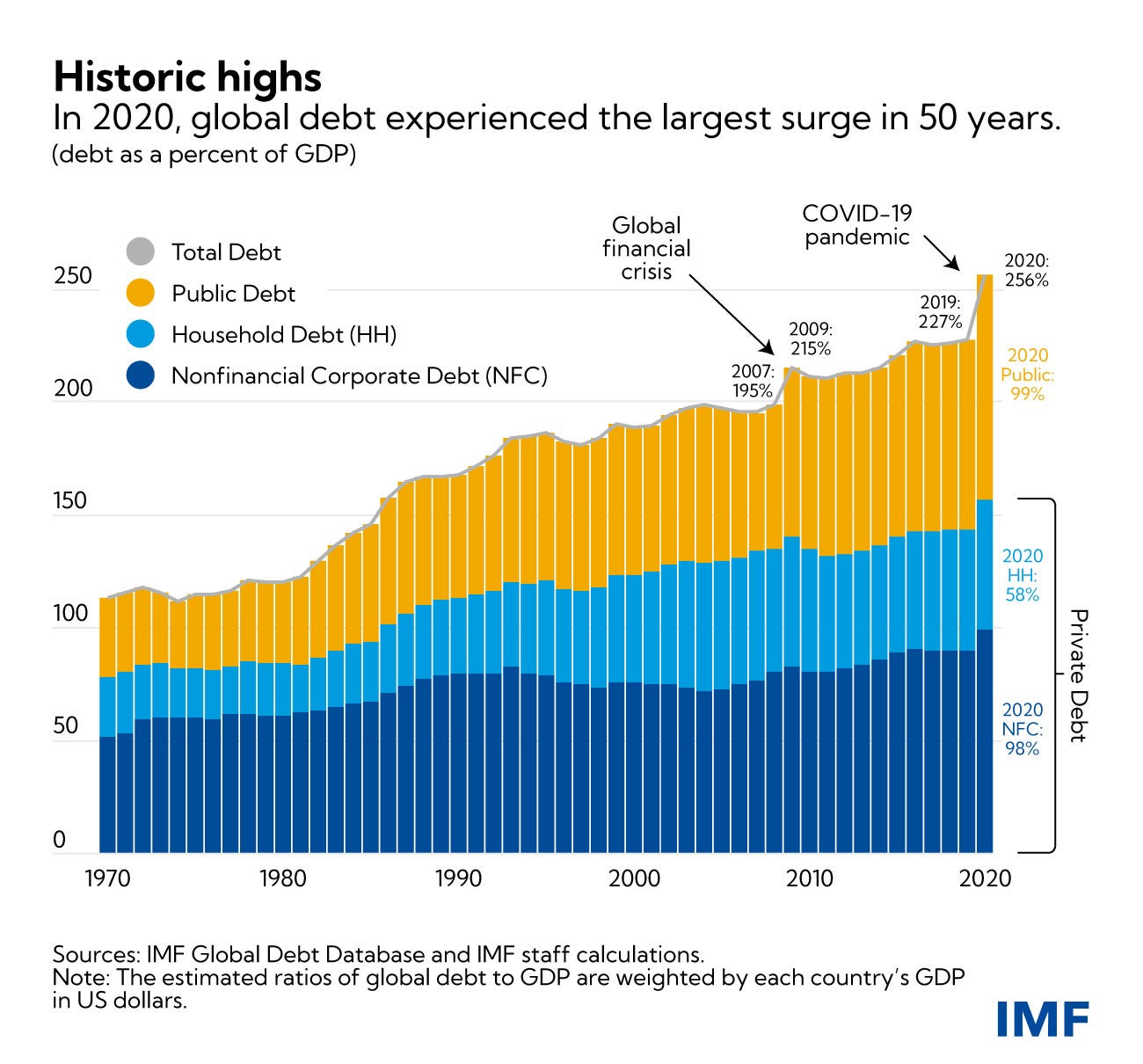 By the way, applying a monetary policy similar to Volker's in 1980 would not have the same consequences at all today. The world is three times more indebted than it was in the 1970s, and any increase in rates has much more significant effects today, even with lower rate levels than in the 1970s...

And this precedent does not take into account the liabilities of the governments, i.e. the commitments of these governments (mainly pensions and social security).

Yet it is with these historic levels of debt that the Fed has embarked on a program of rate hikes, also at a historic pace: never has the Fed been so aggressive in its rate hike policy, which of course increases the risk of systematic fractures in the face of the abysmal size of the debt. 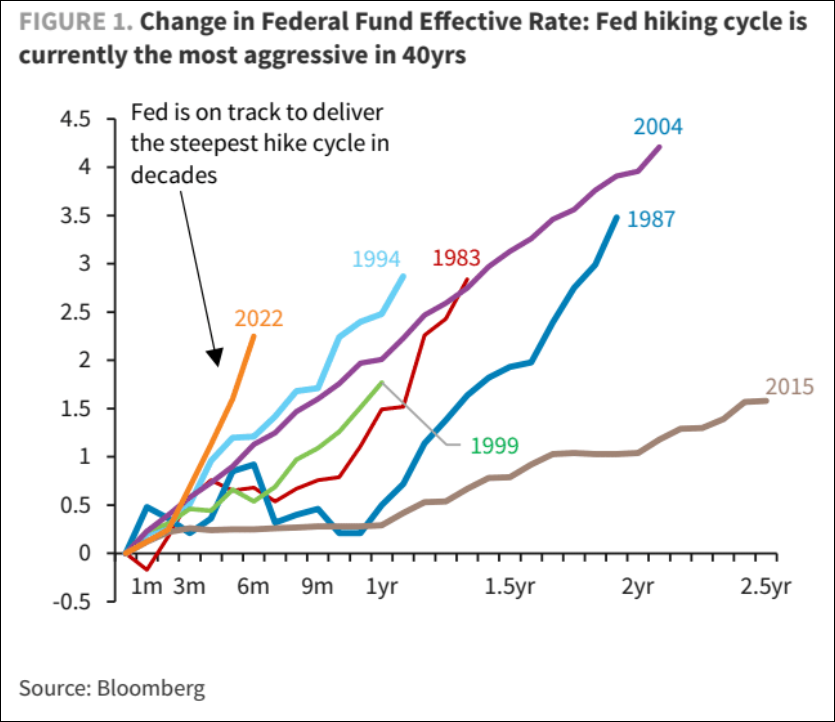 Not only is the debt larger than in 2008, but it is also different in nature. In particular, consumer debt is four times higher than in 2008, while the consumer savings rate is 50% lower. The gap between household debt levels and savings has never been greater:

In France, "whatever it takes" supported demand and stimulated activity during the Covid crisis, at the cost of massive government debt. In the United States, consumption was encouraged by an unprecedented $9 billion support plan in 2020.

The results of this policy have pushed household debt to record levels. Today, there is no longer a reserve on the consumer side to save the markets. There is no more room for consumer stimulus...

Even more seriously, public debt is the part of the debt most exposed to this strong correction. In 2008, it was private debt that was affected. Losses on the government debt segment have reached record amounts in recent sessions: 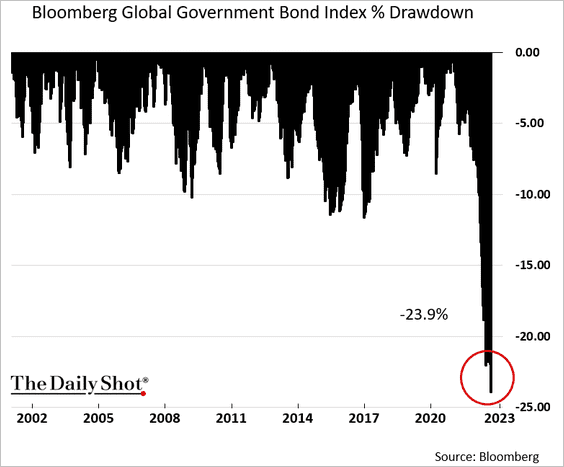 The bond decline is even more severe for government debt than for private debt.

In 2008, the Fed had to bail out the financial system, and according to a study by the Levy Economics Institute, the total amount of the rescue plan was $29 trillion. Early estimates of the bailout needed to save the financial institutions affected by the ongoing explosion of the bond bubble are already more than double that.

The year 2022 is worse than 2008 because, in the end, nothing was fixed in 2008. The private debt bubble has turned into an even bigger public debt bubble. The zero interest rate policy forced funds to increase the risk on derivatives linked to this debt. Instead of reducing speculation on this debt, monetary policies have made it widespread, even in institutions whose mission was to target instruments that were deemed safe.

Instead of tackling the two problems of the 2008 crisis, debt and speculation, the zero interest rate policy has aggravated the problem by further inflating the debt bubble and increasing speculation.

And since the bursting of the bubble concerns mainly public debt and not private debt, the crisis we are going through is in fact much more serious than that of 2008.

Why is this detail so important?

Because these public debt instruments are supposed to be more secure, they are used throughout the financial system. It is the cement of the foundations of most financial arrangements! If this cement turns out to be of poor quality, the foundation cracks and the whole building may collapse.

The products associated with government debt were supposed to be the most reliable among the debt securities on the market. The severe correction we have just witnessed in this market has changed the perception of these instruments.

The reputation of these products as secure assets is being called into question. This is the logical consequence of the Fed's sharp rate hike.

The funds invested in these instruments are very substantial. In England alone, the fall in Gilts threatened pension funds in a market worth over $3 trillion. Without the intervention of the Bank of England, we would have seen a cascade of bankruptcies of pension funds.

Since the British intervention, the market has understood that central banks will have to step in again and intervene massively, probably more than in 2008, to absorb the losses linked to the collapse of the public debt market.

Without this, several financial institutions are about to be caught up in margin calls, and it is not just British pension funds that will be affected.

Today, the focus is mainly on Europe: several banks on the continent have seen their CDS protection costs rise sharply, volumes of short positions reach record levels, and stock prices have fallen sharply for several sessions.

But despite the importance of the risk associated with the change in perception of these products, which are considered risk-free, paradoxically, the banking sector seems to be safe for the moment.

The consequences of this crisis on the banking sector are, in any case, less visible than in 2008.

If we look at the liquidity indicators, there is no indication of a problem of the size of the Lehman crisis at the banking level.

The level of swap movements between the Fed and the ECB does not confirm the urgent need for liquidity at any of these banks: 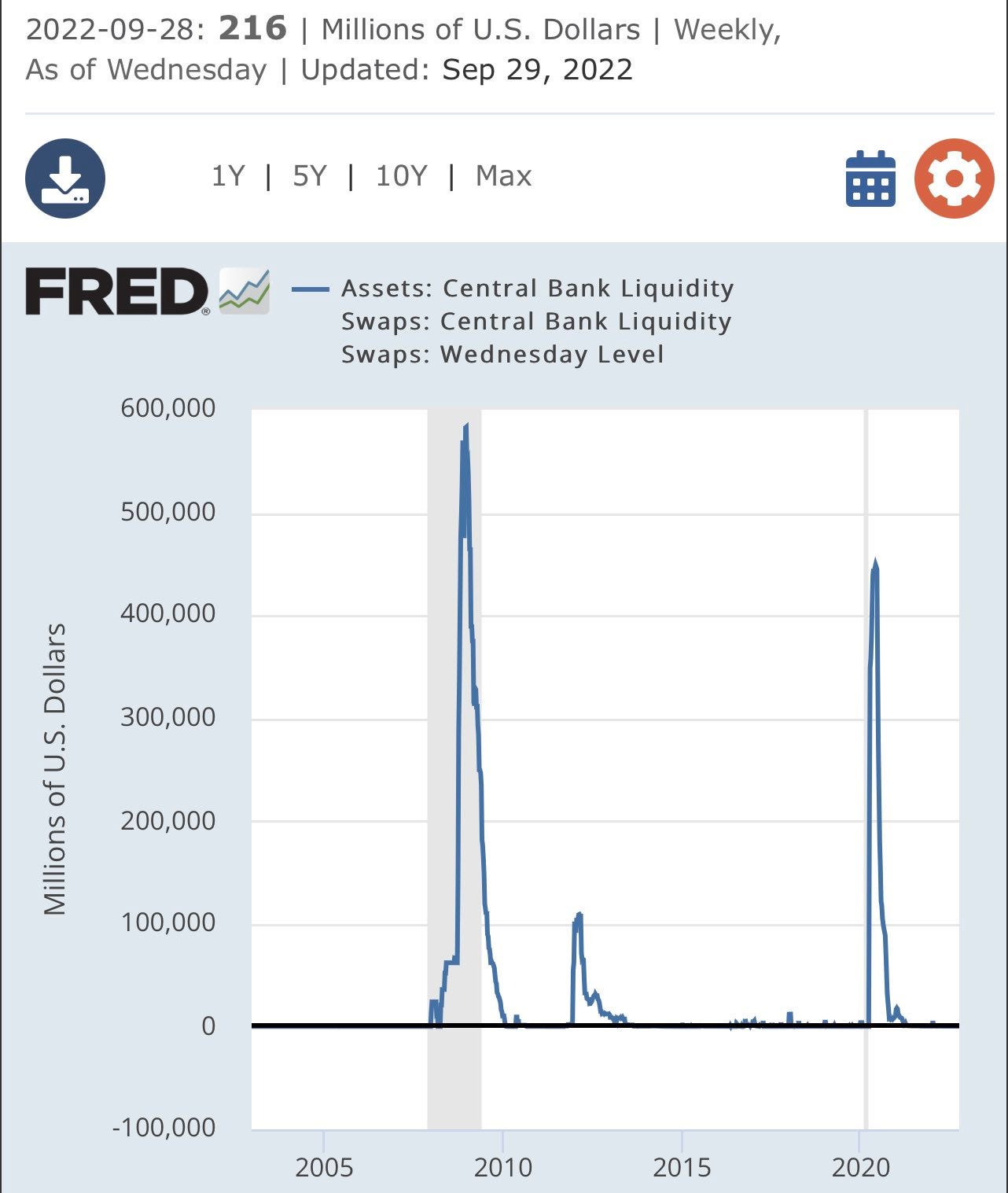 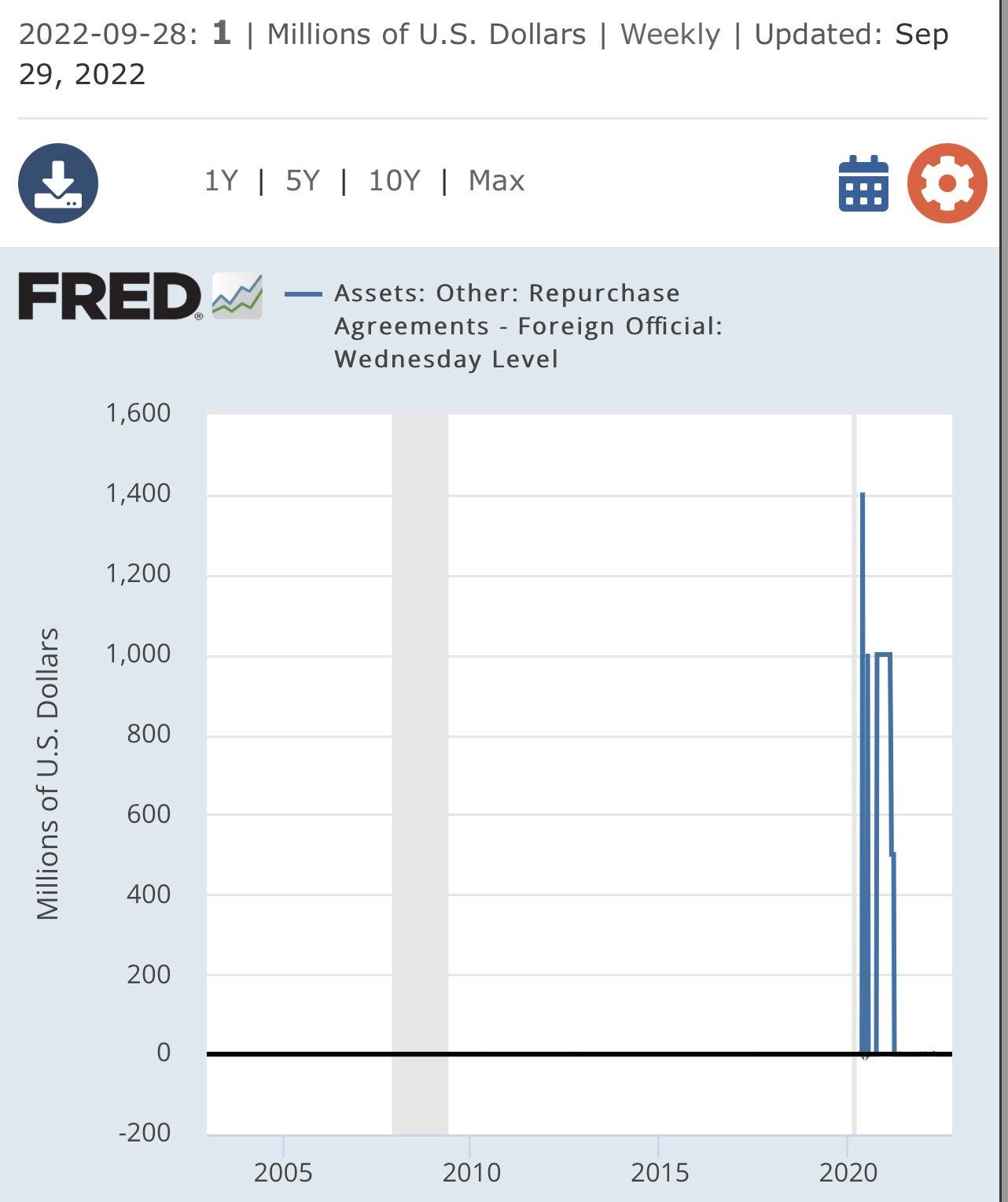 In 2008, as soon as the Lehman bankruptcy began, the Fed had to open emergency credit lines to European institutions to avoid the collapse of the continent's banking system.

Although the risks are even greater than in 2008, this crisis is not yet affecting the banking sector, which is not on the front line as it was in 2008.

For the time being, tensions are limited to pension funds and private equity funds, institutions that are very concerned by this government debt crisis because they have used these products extensively in their financial arrangements.

The damage caused in these institutions is of course less visible, but it could be that their difficulties are logically starting to worry several investment banks, which are exposed to these funds.

Even if the implementation of Basel III rules (favoring upstream rescue plans and internal losses) and better liquidity in the banking sector undeniably constitute a stronger barrier against market turbulence than in 2008, it is likely that central banks will be watching closely the possible contagion of this bond crisis to the GISBs.

The Bank of England's action to stabilize the markets seems in any case to rule out the immediate risk of a Lehman-type event, for the time being.

And with the markets oversold after this accumulation of bad news, there is a short-term short squeeze opportunity that has not escaped some. Retail investors have recently added short positions at historic levels. It is precisely these small traders who will bear the brunt of the brutal short squeeze underway. 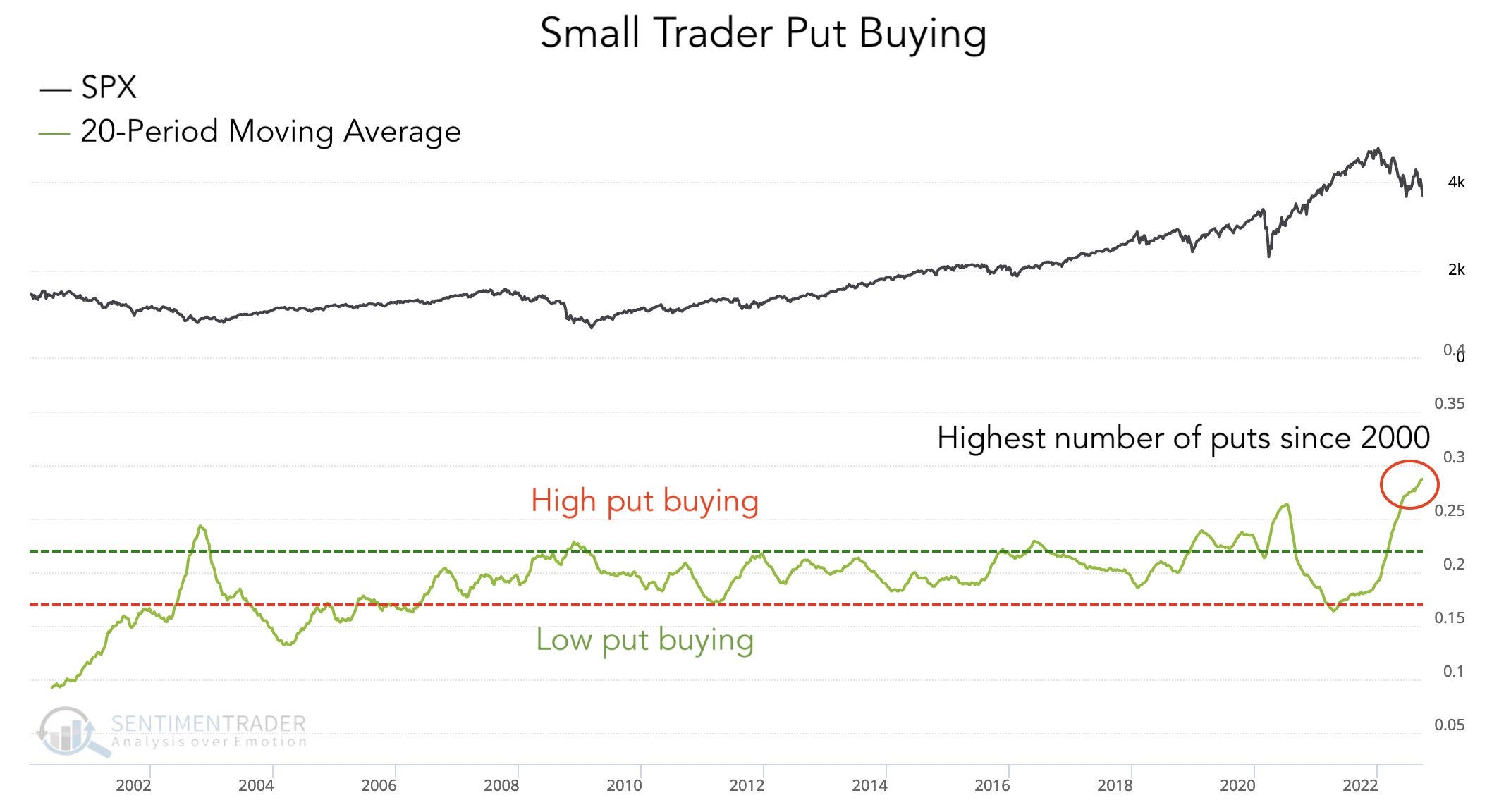 Markets are rebounding as the Fed's brutal and historic rate hike is bringing the U.S. economy to a screeching halt, far from the soft landing we were promised.

Job creation is experiencing a decline comparable to the shock of the Covid crisis in 2020. The numbers released this week are well below those of the last financial crisis: 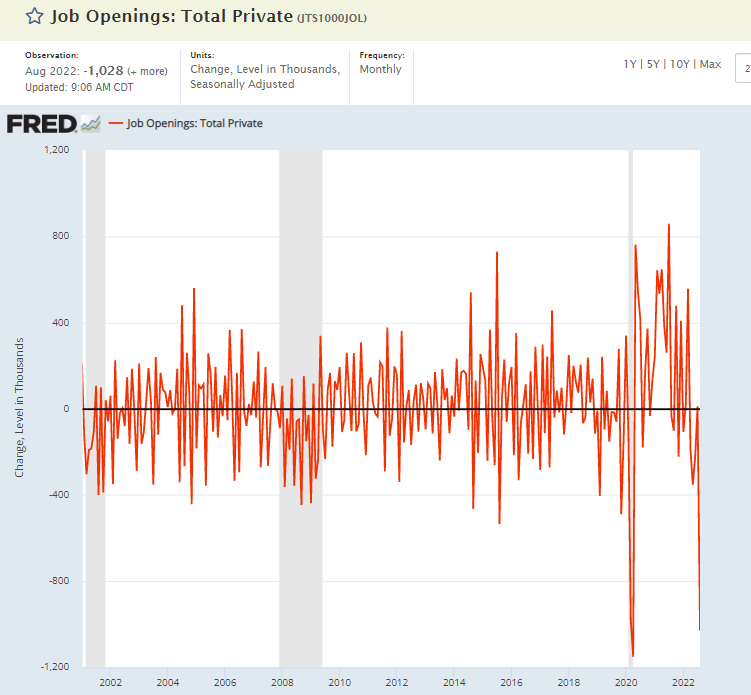 The Fed decided to raise rates this summer because inflation was spilling over to wages, believing that by raising rates, the labor market would deteriorate and that this would have a positive impact on inflation.

Is it by breaking the US labor market that the Fed will succeed in bringing down inflation?

Has the Fed really measured the collateral effects of its fight against inflation?

US pension funds, private equity funds and the real economy are the first victims of this monetary policy.

So far, banks are not affected by this turbulence. But they may well have a much bigger problem to deal with if the bond crisis spreads and the economic downturn is more severe than expected. The challenge for the Fed will then be much more complicated than in 2008.