The Danger Of Letting Inflation Run Rife In Europe

In this early part of the year, the spotlight turns to China, where events seem to be confirming a far more substantial economic downturn than was expected.

The Evergrande fiasco is currently having repercussions on the entire property sector. This week, it is the developer Shimao that has announced it is defaulting on its debt obligations. The property sales of the 100 biggest Chinese players collapsed by 35% in December, closing the year down for the first time in 5 years. The risk of default is now spreading to the other sectors and affecting confidence in the technology sector, one that is highly sensitive to the bonds risk. The plunge of Tencent illustrates this acute tension which is affecting the Chinese technologies sector. The biggest cause of concern for China, however, is the emergence of the Omicron variant, which has already forced the airport in Hong Kong to ban all flights from Europe, the United States and even Australia. China’s strict lockdown policy is threatening economic activity even more, and there is even talk of a risk of recession - this in a country where we have grown used to seeing double-digit growth. Chinese production is literally collapsing in these first few weeks of 2022: 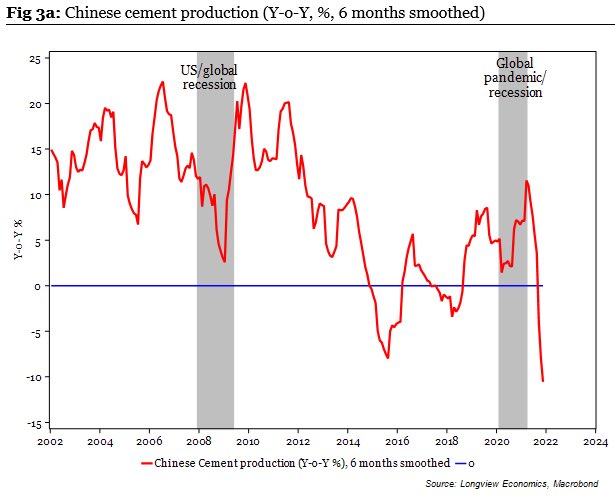 Let’s not forget that at this stage, the Chinese vaccine is not thought to be very effective against the current wave of infection. Beijing has opted to respond in a much more hardline way than the Western countries, by imposing strict lockdowns, a policy that is going to have a damaging effect on the supply chain already greatly affected by the difficulties associated with the sanitary crisis in the Chinese ports.

It is precisely this parameter associated with a reduced supply that risks making the rise in inflation last significantly longer.

The upcoming downturn in Chinese demand ought to have an effect on the fall in prices, but, on the contrary, we are witnessing a resurgence of inflation on most commodities.

New record highs have been hit this week in the price of tin: 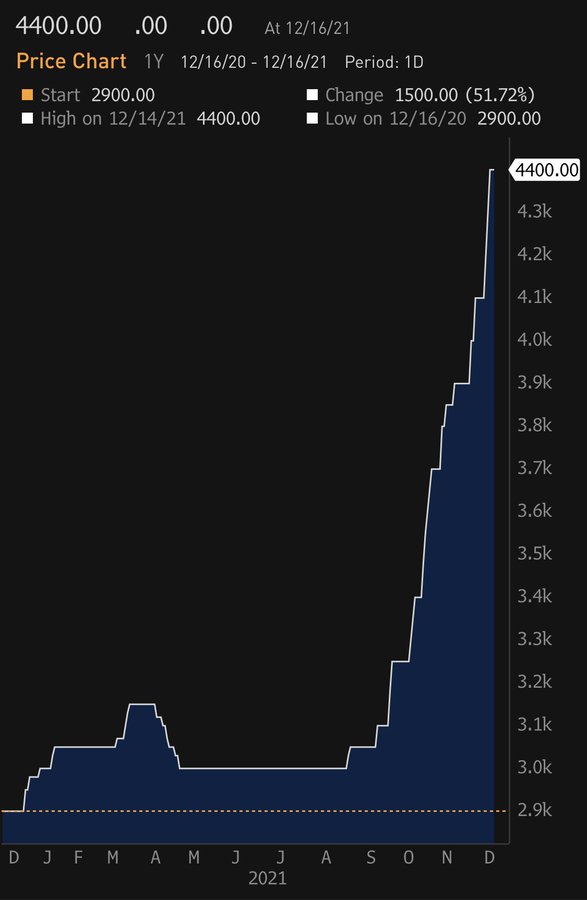 This week, the chairman of the U.S. Federal Reserve has been forced to admit that the central banks are incapable of taking action on the supply parameter in order to counter the rise in prices. The central banks cannot take action in a concrete way to unblock the supply chain. And raising the rates too sharply, on the contrary, would risk aggravating the economic slowdown linked to this entry into recession by China. Is the Fed condemned to let the inflation run rife?

On the European side, the prevailing policy is that of burying one’s head in the sand. Christine Lagarde keeps telling us that the forecasts for inflation are going to remain constant for the year ahead, withdrawing into a denial of reality that is becoming ever more startling.

Declining to make the simple observation that the rise in prices has become out of control in numerous sectors of industry is not only a fruitless attempt to disguise the reality of the situation, but one that also risks undermining the confidence of the economic actors in the central bank’s ability to confront this new challenge.

The energy bill in Europe has already had a devastating effect...one that the authorities are trying to mask at any cost!

Europe is spending $1.2 billion a day on its natural gas bill, rather than $300 million (the average amount paid over the last 10 years). The rise in the price of natural gas is adding almost a billion dollars a day to Europe’s energy bill. Some European countries, however, have decided not to let consumers shoulder the burden of this rise. The French government, for instance, is bearing the burden of the inflationary shock, which is aggravating its deficit still further, on its own, to avoid resentment among its subjects in what is a crucial electoral year, while also announcing fresh interventions by the European Central Bank so as to ward off the next sovereign debt crisis.

Interventionism comes at a cost.

If one looks at the inflationary shocks in recent history, hasty decisions to introduce price controls have never been a good idea. They are the best way to bring about shortages.

And it is even more astonishing, today, to read about such proposals in the Western press...

We have a powerful weapon to fight inflation: price controls. It’s time we use it | Isabella Weber https://t.co/K7xJki2zRi

Price controls have an immediate impact on distributors’ margins: we saw this in numerous examples of inflationary shocks in Argentina, Zimbabwe and Venezuela. Prohibiting producers and manufacturers from passing on the rise in costs that they are enduring leads, quite simply and entirely logically, to them going bankrupt. And trying to make the state intervene to replace this rise in prices amounts to transferring the cost to the said state’s currency, thereby exacerbating the phenomenon of inflation even more.

The longer you wait to act, the more expensive the bill will be. We are already late by several basis points compared to the level of inflation in Europe. Leaving the rates at 0% while continuing with the asset buying program, when inflation is already at over 5%, is an unprecedented threat to savings and to the continent’s overall wealth. 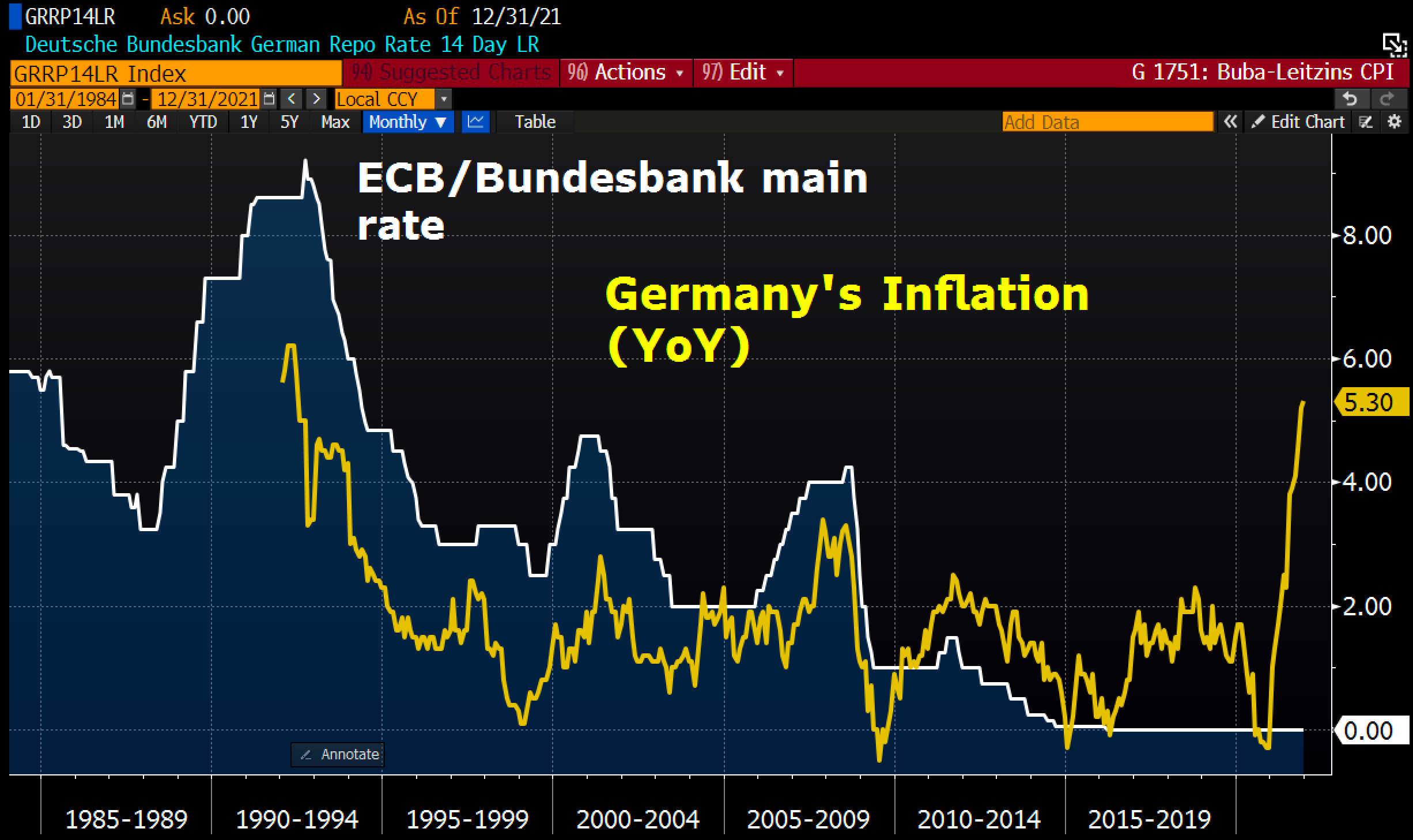 The U.S. central bank has already announced a rate rise, whereas in Europe we are still in a phase of complete denial when it comes to the impact of inflation on economic activity.

Letting the inflation run rife is an option that may still make sense on the other side of the Atlantic. An article published by Anneken Tappe on CNN’s website goes so far as to remind readers that inflation could prove to be beneficial for households that are carrying a lot of debt, who are saving practically nothing and whose wages are keeping pace with the inflation. Incidentally, this thesis is very much open to debate, and it is the poorest households, first and foremost, that are bearing the full brunt of the inflation... But that’s another story...

It is easier to get people to “swallow” the idea of inflation being beneficial in the United States, where getting into debt is a national pastime, both at the private level and the public level. The U.S. deficit is there to remind us of this, moreover, and the inflation is ultimately good news when it comes to starting to deflate, in terms of its absolute value, the weight of that public debt that has been accumulating for so many years... 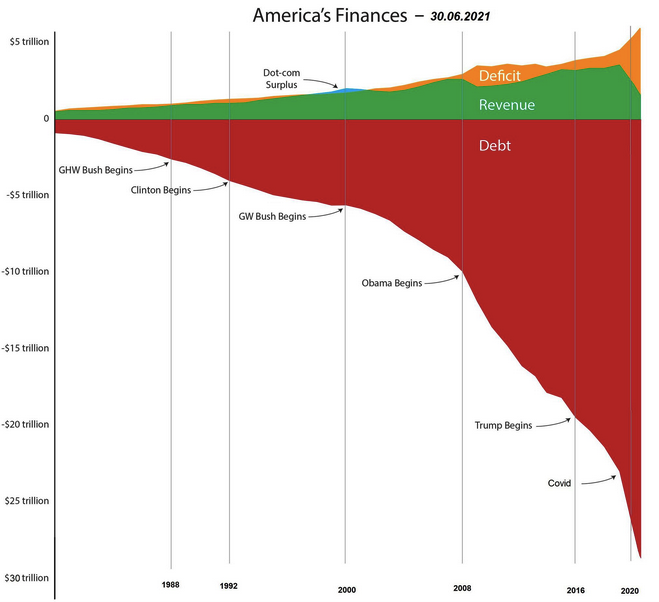 In Europe, however, it’s a different story. The situation is not the same: households’ savings are larger and the level of private debt varies greatly from one country to the next. To take no action, with these levels of inflation, plays into the hands, primarily, of the “grasshopper” countries of southern Europe, which are seeing their debt burden diminishing. The German “ants”, by contrast, will be less content to see both their budgetary discipline penalized, and their savings collapsing with the cut in the real rates.

These German savers are in the process of literally rushing to cash to protect themselves from the falls in the yields from their investments in bond products that are melting away like snow in the sun... 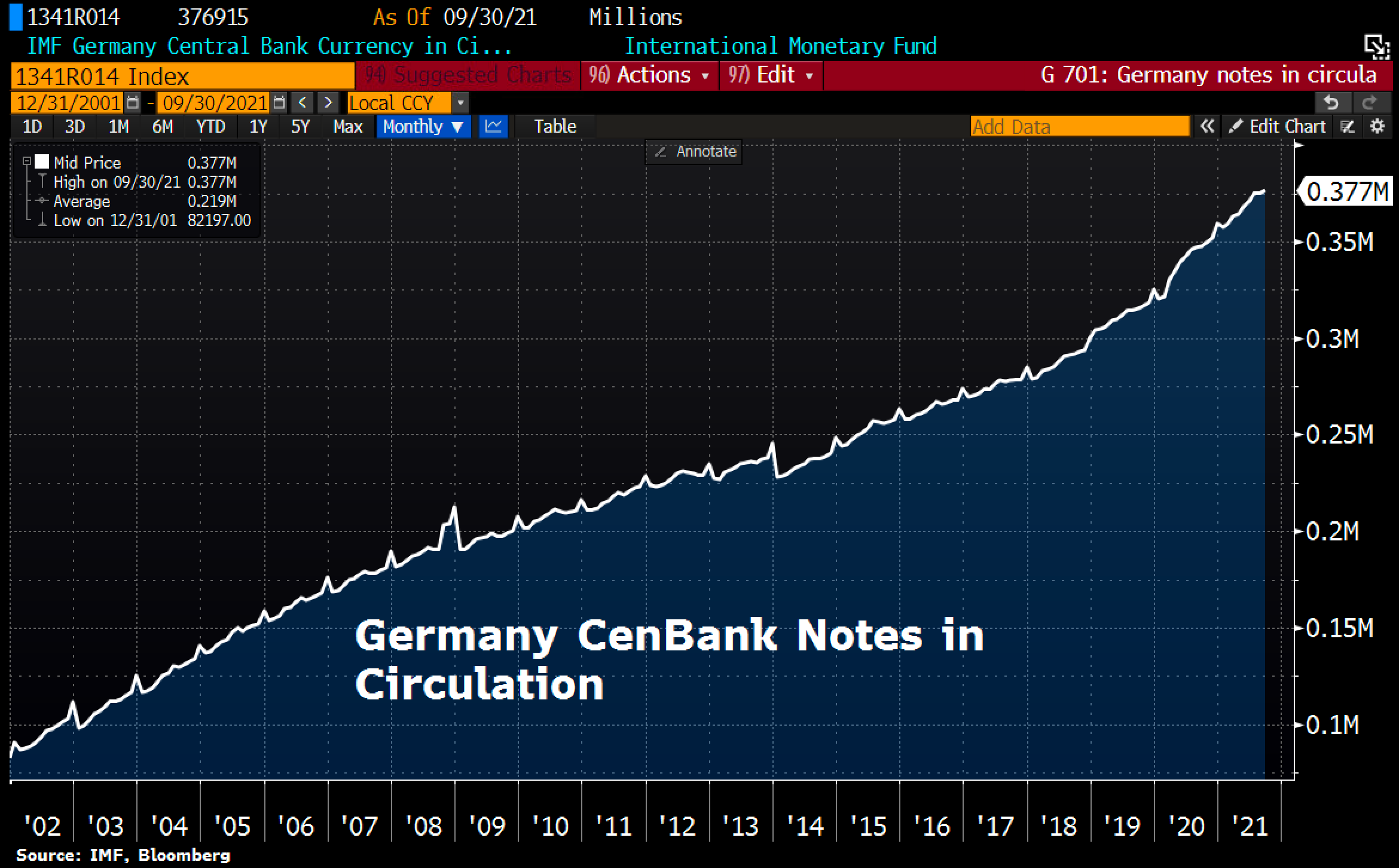 The level of the euro is now playing an increasingly decisive role for these savers. If the fall in the European currency continues, we could see this cash reserve come and seek a safe haven in tangible assets, thereby fueling the inflationary cycle even more. That is the risk posed by the European Central Bank’s current inertia. If the ECB’s denial of the reality continues, the rush to cash risks being transformed into distrust of the currency.

The reserves for the next rise in gold prices are certainly present in Germany and in other countries with high savings rates. At the same time, faced with this inflationary shock, we are witnessing the confidence that these savers have in the ECB being eroded a little more with each passing day. In those particular countries, it will only take a spark in order for the sentiment on metal, still neutral at present, to turn sharply upwards again.