Since the Washington G20 meeting of November 2008, I have been following carefully the steps taken by the great financiers to implement the Monetary Reform requested by the concert of nations that day. A Reform explained in 1988 by The Economist, who announced it for "around 2018". At the Davos Forum in 2014, Christine Lagarde, who then headed the IMF, made a cryptic speech on the upcoming "reset". Since that date, I have wondered what form this revolution would take, so that it could be imposed on the whole planet, even to its powerful opponents.

As you will see, the "reset" is on its trail. It's up to you to take the necessary measures to suffer the least possible, or even to take advantage of the coming events. If you read Egon von Greyerz, and other enlightened wise men, you already know how to protect yourself. It is high time to act.

There are several important messages in this article:

- The first will be repeated several times, to be sure, that you will keep it in mind, in the coming months.

- The third is an invitation to open your eyes. 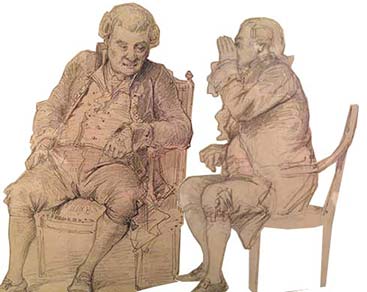 "One day, you will see all values collapse in every markets. This strong leg downwards. will be followed by a bullish rally, a technical retracement, before the stock markets fall again. Only two values will continue to rise, that will be gold and silver. That day, you should only have physical gold and silver."

For me, this day should happen in 2020. I recommend that you follow this message to the letter. Be strictly in physical gold and physical silver.

2. State of play and perspectives

Since China went on vacation for the Chinese New Year on January 25, 2020, country's production and expeditions have stopped. It's been 5 weeks already.

Entire regions are under quarantine. Security measures against the epidemic are such that no one can predict when the world’s factory will resume shipping. Today, the epidemic is spreading in South Korea and the same measures will probably be taken. Industrial production in Asia will most certainly stall in a few weeks.

Due to the limitation of traffic in China, the quarantines imposed, ports almost stopped, almost non-existent flights to or from China, the shutdown of factories, Chinese consumption of gas and oil has fallen sharply, while China is the world's largest consumer. Result, the price of natural gas fell Friday 28 below $ 1.70, the ultimate support 20 years old. The highly indebted American shale gas companies will quickly default on their debts.

Oil relapsed to $ 44 on Friday. This graphic figure in a megaphone shows that it will descend much lower… And drag along the stock market.

This is only a personal opinion, so I could be wrong, but I consider that the index will drop very quickly to the support of those megaphone.

If this should happen before March 18, the date of the next FOMC meeting, this support would be around "1929" on the S&P 500 futures chart.

If this happens before March 29, the date of the next FOMC meeting, the support would be around 1885.

If one looks at the consensus on Dow Jones equity earnings per shares, the too optimistic speculation could be very brutally overtaken by reality. 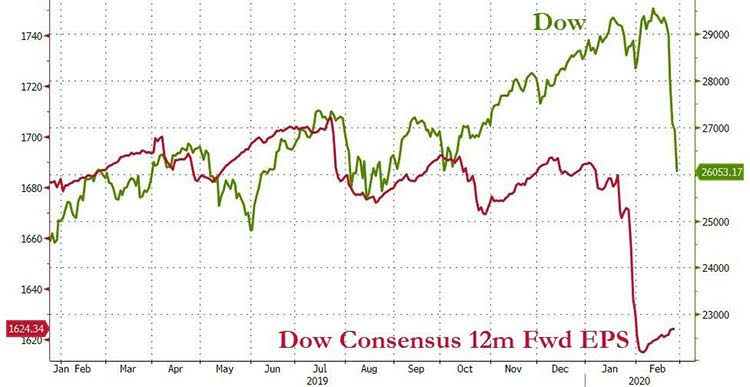 Saturday, an American brand specializing in bridal dresses, announced that it could no longer fulfill its orders. Indeed, customers use to come to the bridal stores, choose a dress among the fifty models offered, then the order was sent to China, where a company took care of the production, then sent the finished model. No dress had been shipped from China since January 25. The economic model of this American company collapsed until the Chinese economy started to function again.

This example is multiplying. How many factories are going to find themselves in technical unemployment, due to the disruption of the supply chain in the coming weeks? How soon will retail giants like Amazon run out of inventory?

How long will last this freeze in the global economy ?

I would not be surprised that at the end of March, no one will be able to answer this question. The stock market should reflect that situation.

Imagine, this "epidemic" spreading in the Western economy in May or June... without anyone knowing when business will resume normally.

The corporate bond market is going to collapse, because without turnover, no company can pay its debts.

But if companies do not sale, the state could no longer collects VAT and risks having a very large drop in corporate taxes.

If companies lay off their employees, the state will also not levy personal income taxes.

How long will it takes before we have a massive bond crisis?

The stock market krach at the end of 1929 extended until the middle of 1932, that is to say two and a half years, and Wall Street has taken over 20 years to recover.

The fall in government bonds began in mid-1931 and lasted a whole year.

The following year, in 1933, the United States nationalized individual gold, before devaluing the dollar in 1934.

History is certainly not going to repeat itself identically, what we are experiencing is absolutely unique.

Open your eyes and stay calm

China has stalled its economy. The global economy’s supply chain has seized up and you’re going to see a spate of government action around the world that’s going to shut down the whole economy.

The Geneva Motor Show is canceled 3 days before opening, the Nice Real Estate Fair will not take place this year, any commercial event of more than 5,000 people is prohibited in France and above 1,000 people forbidden in Switzerland. Japan is about canceling the Olympic Games, perhaps Roland Garros will be cancelled in France, etc. As in China, cities, then regions could be quarantined everywhere.

In France, the law to allow these government decisions had been proposed to the National Assembly on December 5… before the start of the epidemic in China.

Take the factual information with the necessary hindsight, without being overwhelmed by the ambient psychosis fueled by the media. Coldly analyze the economic event that is taking place.

If the paralysis lasts only two more weeks in March, it will only be a hiccup. If it goes beyond that, the central banks will have to create trillions of dollars to pay the unemployed working masses, as it is already the case in China, where companies continue to pay the wages of quarantined workers. Later, governments will finance major public works like during the Roosevelt's New Deal. Companies will borrow even more to recreate factories to replace those that had been relocated to Asia.

A gigantic monetary creation will be launched in the coming months and years, but it will take several years to rebalance the industrial and productive fabric, because the longest will be to train skilled men. The first effect of this monetary creation will be to devalue the real purchasing power of currencies, in other words, it will push up the price of gold and silver everywhere.

If you are in physical gold and silver, without trying to speculate on the short term, the very short term prices of precious metals in COMEX and LBMA during the month of March should not matter. Remember:

"One day, you will see all values collapse in every markets. This strong leg downwards. will be followed by a bullish rally, a technical retracement, before the stock markets fall again. Only two values will continue to rise, that will be gold and silver. That day, you should only have physical gold and silver. "

If you look at what happened after November 14, 1929, after the dramatic fall that lasted a month, there was a very strong bullish rally, which lasted just over 3 months. The next violent relapse started only 5 months later.

The $ 21 silver target was missed in February. The next upward leg should take place in May, it should seek to reach directly $ 30, before consolidation. At the end of 2020, silver will start a tremendous upward push beyond $ 50.

As for physical gold, it will keep its promises, very far from current prices. Be confident.

Remember, I do not recommend playing with mining.

Since 2009, we heard about "currency war" and, since 2016, of "trade war". A re-balancing of the world is ongoing. All Western countries will have to recreate their industrial fabric, which had been relocated to China and Asia since the 80s. If you re-read "the Bancor principles" in my article of May 8, 2019 this process is starting to take place with forced march. You should be delighted, because within a few years your country (whatever it may be) will once again become proud of its national production and will return to full employment.

In the short and medium term, the value of stocks, bonds and currencies should undergo a violent readjustment due to the explosion of the debt bubble, hang on to your precious metals, which conversely will be very strongly revalued upwards.