Is the French budgetary situation recoverable? Les Echos tells us that in 2020 and in 2021, the government will be financed as much by debt as by taxes, and the amount of debt issuances will be as high as tax revenues. 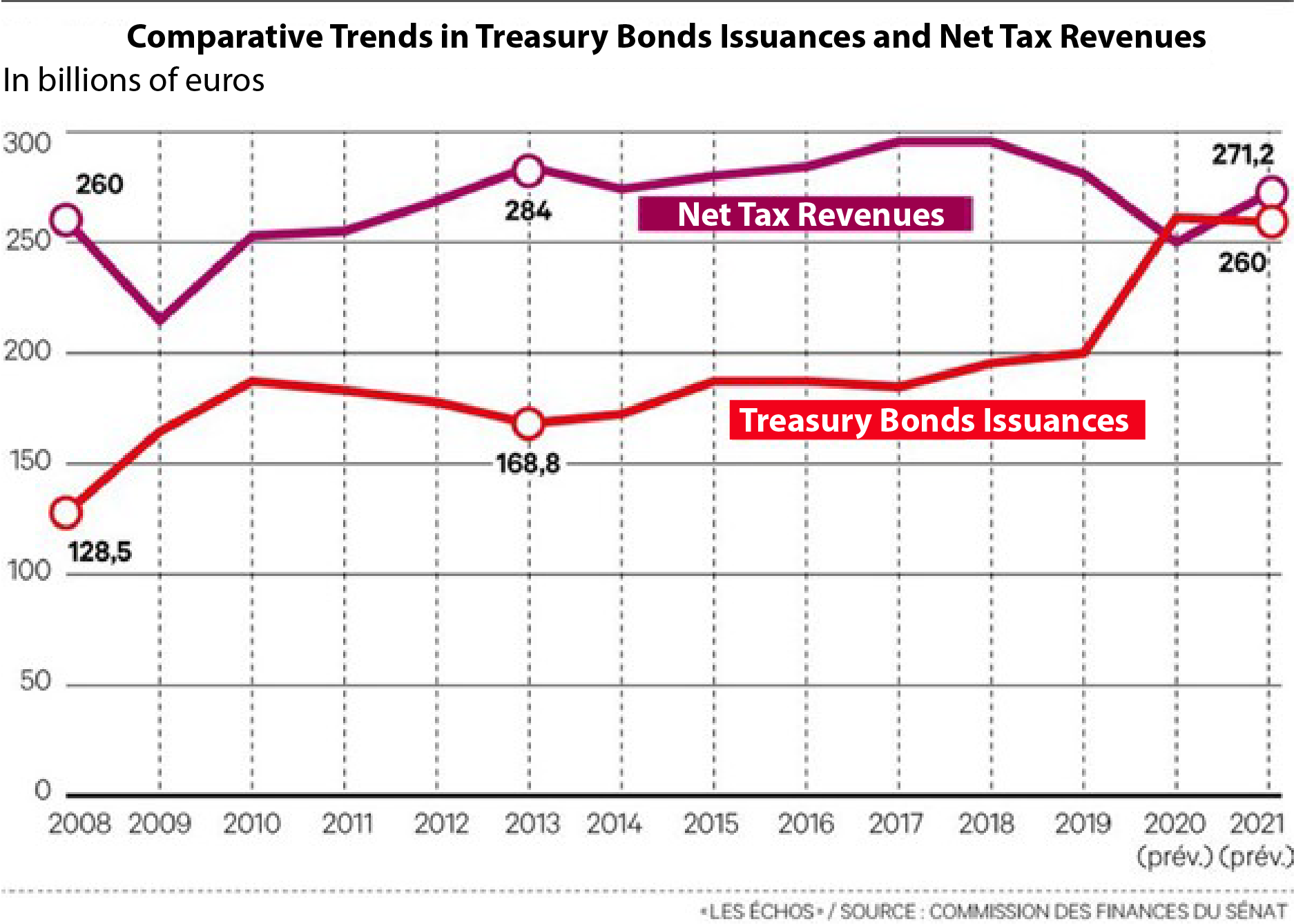 A situation completely out of the norm, which seemed inconceivable not long ago. But it must be said that budget deficits in France are recurrent, since 1975, let's recall, and that they exploded with the crisis of 2008, and even more so with the crisis of Covid, or let's say more surely because of its management by means of lockdowns that suffocate the productive economy.

As a result, the debt exploded from 98.1% of GDP in 2019 to 119.8% this year, and in stock it represented 1 trillion euros in 2008 to exceed the 2 trillion euro threshold last August. Every year, France must therefore issue more and more government bonds (Treasury Bonds Issuances), both to finance the deficit and to pay down maturing debt (the government repays maturing Treasury Bonds Issuances with new debt, it does what is known as "financial cavalry").

"Clearly, indebtedness is becoming as important as taxes to ensure the government's standard of living," the economy daily points out. The French already have the highest rate of compulsory levies in the OECD countries, but this is not enough to cope with public spending, far from it! For 2021, Bercy hopes to collect 270 billion in tax revenues, but nothing is certain with the resurgence of the pandemic and the new lockdowns that are on the horizon... The vaccine may represent a hope-but not necessarily a magical solution-it is still too early to judge.

Paradoxically, the burden of debt, which is borne by the government budget, is decreasing over time (35.8 billion euros compared to nearly 50 billion euros a few years ago): this is the magic effect of zero interest rates, as old debts issued at high rates are replaced by new ones with interest rates close to zero, or even negative. The government doesn't even have to tighten its belt, money is flowing.

However, we have to think about finding a way out, because nothing says that interest rates will remain so low, and in the event of a somewhat brutal rise, bankruptcy is on the horizon, like Greece in 2011, but without anyone to help us. It is then the French savers who will pay, by forgetting about a part of their bankbooks and their life insurance.

The scenario of a rapid exit from the spring lockdown to return to sustained growth is moving away, the forecast of 8% GDP growth in 2021 was already completely exaggerated, as we said, and it is rather stagnation that awaits us. With his firm ACDEFI, Marc Touati considers as a realistic hypothesis that it will take us about ten years to return to the level of GDP in 2019. Years of unemployment, loss of purchasing power, sluggish growth. And if the government does not make an effort, it is the saver who will foot the bill.