A month ago, coal and industrial metals were at their all-time highs.

China, the world's largest coal producer, had announced an energy crisis. It announced that its 135 coal-fired thermal power stations had suddenly discovered that they had less than a week of fuel, with half of them barely even having enough to run for 48 hours. Astonishing, in a country with extremely rigorous five-year plans, which in a few years has been able to propel itself to the forefront of economic powers.

However, to respond to this shortage, the government had decreed to ration the most energy-consuming industries, including obviously the metallurgy, creating a real panic on the prices of industrial metals right up to the London Metals Exchange (LME).

India, the world's second largest producer of coal, had an identical energy crisis the same week, leading to the same government decisions to ration energy to metallurgy, which amplified panic over metal prices.

Isn't it curious this sudden simultaneity?

And suddenly, after a crazy rise, all metal prices fell very sharply on October 12. 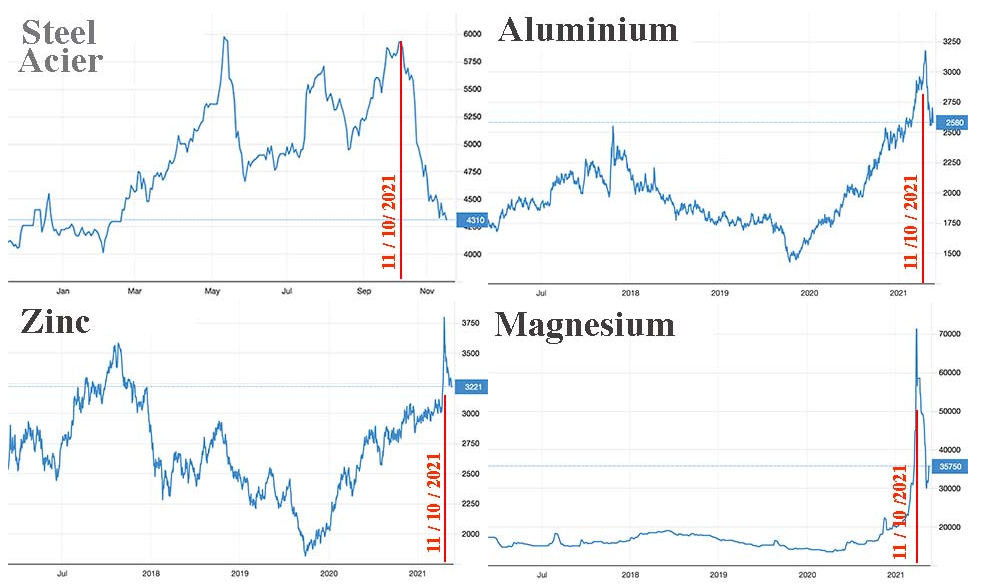 Note that the metals have not returned to their original prices. They are still at a high level, even very high for some.

With the auto industry at risk of technical layoff due to lack of magnesium sheets to dress vehicles, calm returns and prices collapsed on October 12, as with other metals.

Coal, a month later, still remains at an excessive level, while nothing affects production. 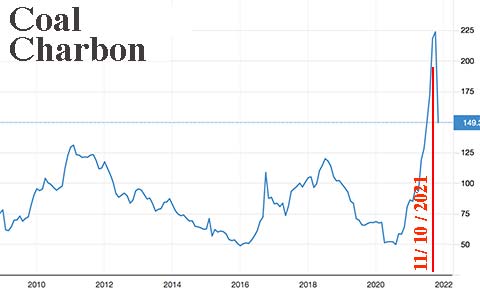 Many negotiations were taking place in the shadow to prepare for the international summit of COP26 in Glasgow. The promoters of this "climate change" meeting wanted to secure commitments from China and India, including on coal consumption.

With apparent docility, these two countries immediately took extreme measures, lowering energy production, which disrupted all the metal production of these factories of the world, creating instantaneous shortages in the markets and a very violent rise in prices.

Faced with the dramatic consequences of the policy they had yet requested, the Western authorities had to engage in new negotiations in the opposite direction, asking China to restartits steel production, even if it means polluting the planet.

A few days later, ZeroHedge, republishing an article from Xinhua, reported that the State Grid Corporation of China, which supplies 88% of the Middle Kingdom's energy, had rectified the situation.

China did not see fit to attend the G20 in Italy, whose main topic was the preparations for COP26, and Xi Jinping did not join either the Glasgow teleconference.

Nothing concrete came out of this COP26, which aim to put an end to Coal. Indeed, India, where 70% of its electricity comes from coal-fired power plants, has committed to achieving carbon neutrality in 2070, 10 years after China.

If we know that the latter has 37 years of coal reserves in the ground, and is committed to stop coal in 40 years, China has thumbed its nose at the preventers from dancing in circles of "climate change". In the 50 years to come, scientists will certainly have found an alternative energy and in the meantime, the BRICs are prioritizing the growth of their economies and letting the Westerners make noise with their mouths.

Meanwhile, a few German technocrats have found further red tape that will delay the flow of Russian gas through the Nord-Stream-2 pipeline for at least 6 months (see article). Like what, with a little will, it is easy to generate an energy crisis, which itself will be a source of inflation.

Inflation is a terrible threat to people, but also a way of reducing the debts that suffocate states and the entire economic system. 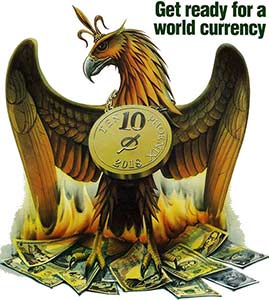 Didn't The Economist predict in 1988 that the future World Currency, "the Phoenix", would rise from the ashes of national currencies around 2018?

The price of energy and raw materials can only soar, reflecting the depreciation of the purchasing power of currencies after the crazy monetary creation of the various central banks in recent years.

Note that, since 2006, the Federal Reserve no longer publishes the number of dollars circulating in the World (M3) and stopped publishing M1 and M2 on February 1, 2021. No one can therefore know the real quantity of money injected into the system each month. Given what the charts for 2020 show, ahead of the data release, there is cause for concern about the real purchasing power of these newly issued billions of dollars.

In this Zerohedge article, Jim Reid says that with real rates at current levels, inflation is expected to be 20% annually.

If inflation stays at this rate for 5 years, nothing of the purchasing power of money remains.

If you haven't invested your cash in gold and silver, you'll quickly be in dire straits.