Since the dawn of time, commodity prices have been rising and falling in turn, as demonstrated by Leonardo Fibonacci (1175-1250). Any strong upward push of the price of a raw material will bring a period of consolidation more or less deep, regardless of the market, before a further increase if the conditions are met for that.

Precious metals are set to rise much higher, but after the sharp rise in recent months, a correction is needed and probably imminent.

Silver has developed its third leg up (see article of June 24) and arrived on September 4 at the expected level (see the chart of August 9).

Since September 2018, the main oblique resistance has blocked the increase more than 5 times, it is more than likely that it will once again force prices to a consolidation. 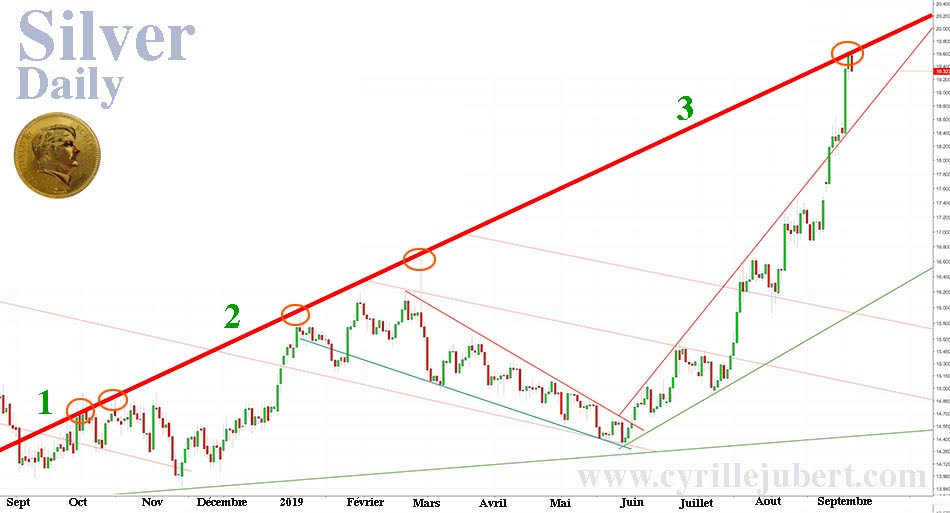 If we look at the monthly prices, the 50 months Mobile Average (MM50M) has played a major role as mobile resistance since 2016, the chart logic imposes a pull-back on this resistance.

We could therefore have a violent downward push towards $ 16.35 this month, a correction which should last about two weeks. 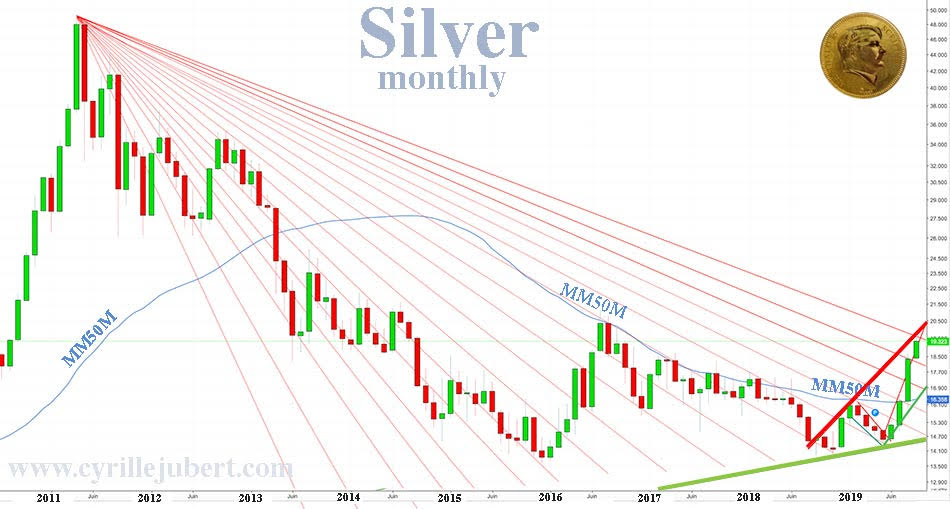 Once this correction is completed, the increase should resume. The price of silver is expected to reach $ 21 towards the end of the year and could reach $ 26 or $ 27 in March 2020.

After a brief consolidation on the Fibonacci threshold of $ 21, silver will continue to rise towards a strong resistance at $ 31, which will likely be hit in August. 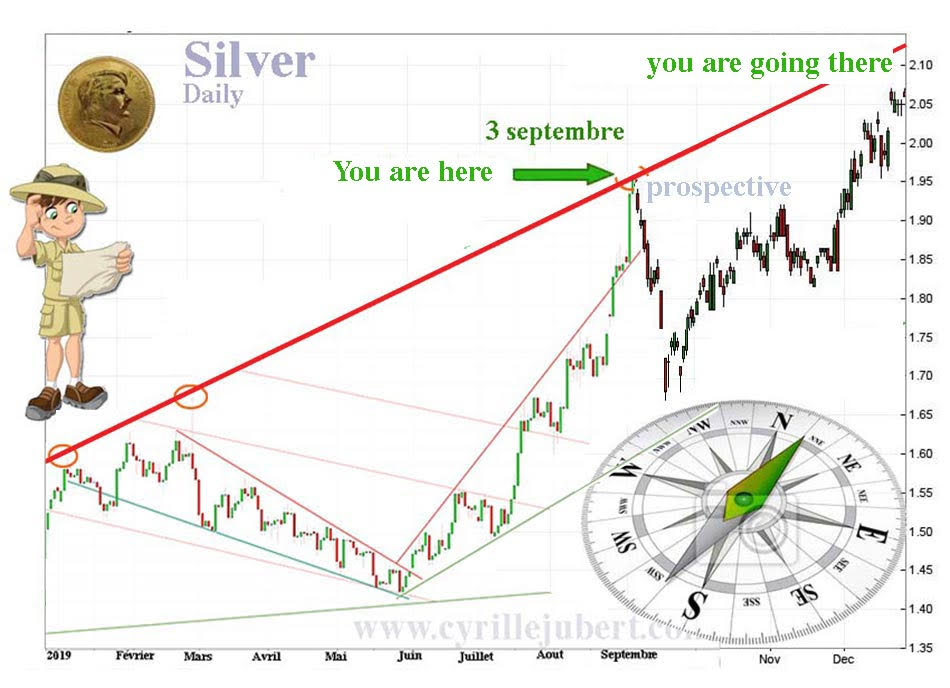 After the very strong surge of gold during the last 3 months, it would be logical to witness a consolidation.

Since the threshold of $ 1,350 has played a major role since 2013, a pullback on this resistance seems necessary. Here too, the correction could be very brutal in September.

The 100-month Mobile Average (MMA100M) broken in June is currently at $ 1,351. This reinforces this resistance that probably is now a support.

If the Fed's speech at the end of the FOMC meeting of 17-18 September announced a new monetary injections (QE), gold would rebound strongly upward. 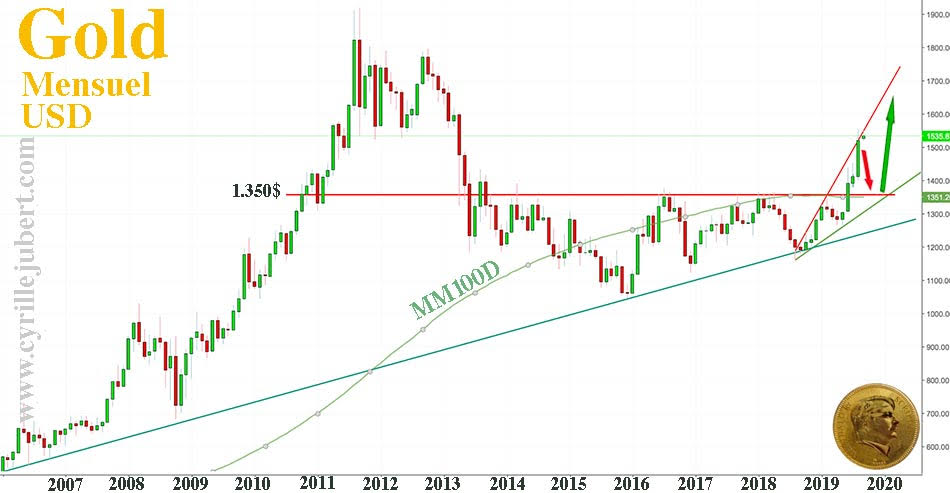 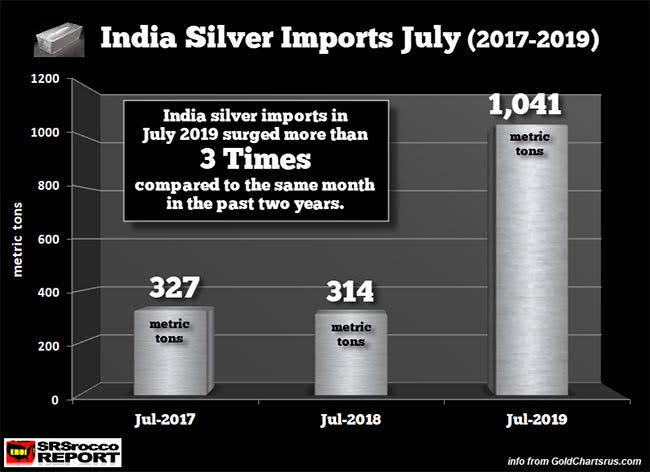 On August 7, 2018, in the second part of my article "Someone is cornering the silver market to cause a shortage", I was talking about India's silver buying:

Indian industry (which includes jewelery) only needs 2,667 tonnes. The average surplus of 2,700 tons since 2011 has been imported by six banks and eight agencies, as you can see in the World Silver Survey 2017. Since 2011, these buyers could have accumulated a treasure of 25,000 tons (881 million ounces)."

What I did not specify in this article is that China imposes a tax on silver import, Chinese banks and hedge funds (but not only Chinese) take advantage of the facilities of the "free zones" created in India and have their silver delivered there excluding tax. We are therefore witnessing a continuation of this "Corner of Silver", with a strong acceleration of this phenomenon. "The Big Fish" that I evoke in my article of August 12 does not hunt alone, since the World Silver Survey 2017 reports six banks and eight agencies importing silver in India.

These gigantic investments in silver have everything to do with the monetary reform in preparation and the RESET that has already begun, without the masses noticing it. All currencies are devaluing in concert against gold. In euro, british pounds and in many currencies gold has set new historical records. It is never gold that goes up, it is the purchasing power of money that diminishes. As you already know, the purchasing power of every fiat money will be very seriously eroded in the years to come. It should be divided by 7 at least.

For now, remember that if you have to complete your purchases in gold or silver, it should be done on September 17 or 18 in the morning... If my analyzes are correct, obviously.