The Whole System Is Bankrupt

On March 2, I published an article entitled "Forced March Towards the Reset".

You can read it again from A to Z. Oil has collapsed to the bottom, as announced. American indices fell where I expected them, in perfect timing. The economic world has stopped so well that the United States has lost 53% of its GDP and a quarter of the working population is unemployed. The US tax revenues have been at their lowest level since that date and without monetary creation, the United States could not honor its debts.

THE FINANCIAL SYSTEM IS BROKEN

Remember the liquidity crisis in the REPO market on September 16 2019, the Fed had to inject $200 billion.

Three months later, to avoid the crisis announced for New Year's Eve, the Fed had to release $500 billion in liquidity.

Three months later, at mid-March, in the midst of a stock market crash, the Federal Reserve injected $1 trillion into the REPO market, even while Congress passed the Cares Act to inject more than $2 trillion into the economy.

Given the geometric progression of cash requirements during these quarterly crises, how far will this monetary creation go?

The Federal Reserve created $3 trillion, ex nihilo, repurchasing the debts of the companies to avoid bankruptcies in chain, and repurchasing the Treasury bills so that the administrations continue to function. The Fed's balance sheet went from $4 trillion in January to over $7 trillion in just 3 months. It will probably exceed $9 trillion at the end of the year.

This monetary creation of all the central banks will lead to a very strong erosion of the purchasing power of the currency. You’ll be able to measure it over the next few months in gold and silver.

In "Forced March Towards the Reset", there was a message repeated several times voluntarily, remembering an insider's confidence, a few years ago:

"One day, you will see all values collapse in every markets. This strong leg downwards. will be followed by a bullish rally, a technical retracement, before the stock markets fall again. Only two values will continue to rise, that will be gold and silver. That day, you should only have physical gold and silver."

The stock market collapse has taken place. It was followed by a 3 months bullish rally.

Oil in overproduction while world demand is still low, seems to want to start a new leg of decline, which should bring the stock markets with them in the coming weeks.

It is very likely that the above scenario will come true this summer. Gold before the end of the summer will have exceeded its historic highs in all currencies and silver will have started a memorable bullish rally, which will last several years.

The seasonality of silver supports this thesis. 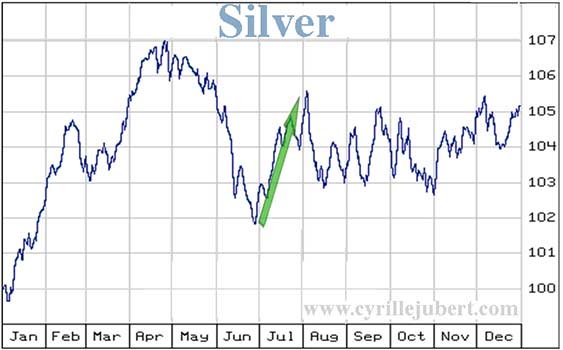 In March, while pulling back on the resistance coming from the 2011 summit, and bouncing back on the 30 years Moving Average, silver rised in a channel, between support and resistance towards the level of $ 18.50-19, fiercely defended since 2015.

If the current support holds, this big resistance should be attacked around July 10.

On June 3, 2020, at the World Economic Forum, Kristalina Georgieva, the current director of the IMF, gave a conference untitled "The Great Reset". During her speech, she referred to the 1944 Bretton Woods conference, which had set the monetary rules for the following decades and she declared that this epidemic is an opportunity to change the world.

Klaus Schwab, founder of the WEF, even clarified that this pandemic offered a "rare but narrow window" to reimagine and reset our world. "Narrow" means that the time for this opportunity is running out and that everyone has to go forwards without procrastinating.

Remember that in March 2009, China announced the changes it wanted to reform the international monetary system. The document is still online on the BIS website. It was talking about The Keynes’s Bancor.

In this system, nations must trade fairly and for this, each of them must create wealth, so they must have competitive industries, to sell their products abroad.

These last years, the Trump - Xi Jinping duo have just made a very big show about international trade for dummies. They pointed out that American industry cannot produce without the spare parts coming from China. The production chains stop when there is a supply disruption. As for distribution, once the buffer stocks have been used up, the shelves are empty, because the majority of consumer products are produced in Asia. It is this dependence on the United States that explains the permanent imbalance in the Sino-American trade balance. This will no longer be possible once the Bancor or its equivalent will be in place.

Trump first fought against the Wall Street giants to repatriate their cash and now pushes them to relocate their factories in the United States. The same thing is happening in Europe.

The largest mask factory in Europe was in Brittany. The French state not having kept its commitments, the plant was dismantled in September 2018. A huge fiasco, full of lessons.

The other important part of the Bancor system is that a supranational authority will be in charge of monitoring the trade balances of all nations. If a country exports too much, its because its currency is undervalued. Conversely, a country with a negative trade balance shows that its currency is overvalued. The Yuan/USD parity should therefore experience a very strong adjustment, with a devaluation of the dollar and a rise of the yuan.

China has been preparing for this for 12 years, on the one hand, by developing its internal market and on the other hand, by upgrading the quality of all its products.

The "Great Reset" will bring all developed countries to re-industrialize, with modern factories, robotized to the extreme. Artificial Intelligence will, wherever possible, replace humans. The working population, in order not to find themselves unemployed, will have to train and adapt. This revolution has already started, but it will become generalized in the 10 years to come. This should be an opportunity for all of us, while staying flexible, adaptable and looking far ahead.

The currency of tomorrow should be digital and blockchained, that is to say that the monetary units will keep the memory of all previous transactions. Today, this concept still poses problems, because if citizens choose cryptocurrency, they will no longer need to leave their cash in their bank account. This could generate a bank-run and bankrupt the banks. Bankers will have to reinvent themselves first. This revolution will have to wait a little longer before being adapted to the general public. (Source: ECB)

However, there is nothing to prevent this new monetary technology from being applied in trade between central banks. The International trade currency could be a form of e-SDR, the value of which will be defined by a basket of regional and national currencies, and most likely by gold. Even today, the role of the IMF is taken over by the United States, which refuses to see the SDR replace the dollar (source). This reset could be done without the United States’s approval, taking advantage of a period of great economic weakness and social unrest in major American cities... If you see what I mean. That’s perhaps why Klaus Schwab was talking of "a rare and narrow window".

Rumors suggest that the euro experiment could be coming to an end. The Northern European countries could adopt a common currency around the Deutsch Mark, while the Southern countries would revert to their old national currencies, which would allow them to have a more flexible monetary policy. That is to say, they could devalue whenever it seems necessary to revive their national economy.

In the short term, the economic crisis, triggered by the quarantine of Chinese industry and amplified by the general confinement of populations, worsened the financial situation of all developed countries, forcing the central banks to print ever more phenomenal quantities of money. The value of gold will therefore have to adjust accordingly in the coming months. With the $3 trillion injected in March and the new $1 trillion infrastructure stimulus plan, the price of gold in USD is far behind its theoretical price.

The gold chart suggests that the current resistance at $1,750 could be broken in August, on its way to mark new historic highs. 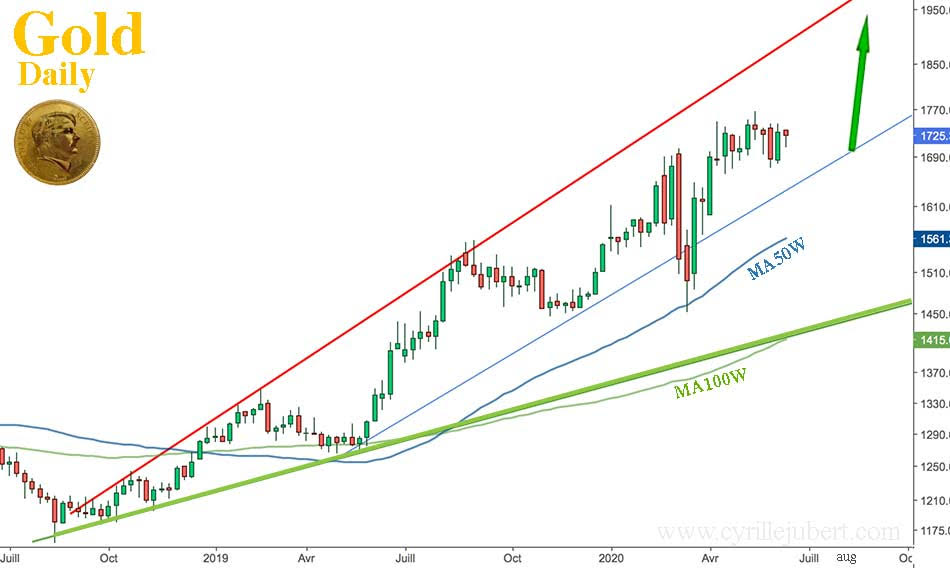