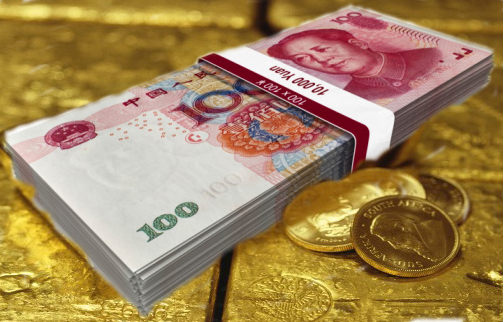 On July 17, 2015, China updated its official gold reserves as being 1,658.1 tonnes. This represents an increase since the last announcement in 2009 of just 604 tonnes (+57%). This amount is far lower than most expectations of between 2,000 and 4,000 tonnes, including mine. Surprised? Yes, I am. If we look at the amount of gold that has been brought into China, especially since the 2008 financial crisis, it is estimated China has accumulated approximately 14,753 tonnes. What we don’t know is how much is under government control and how much is in private hands.

The Chinese authorities have developed a range of policies going from legalizing gold bar and coin ownership in 2002 to opening its gold market via the Shanghai Gold Exchange in 2014. Could it be that most of the gold is in private hands and only a small portion of 1,658.1 tonnes out of 14,753 tonnes (only 11%) is in state ownership or government direct control? To me it is very improbable. Could all of a sudden the Chinese population increase its wealth in such a manner as to buy approximately 6,800 tonnes of gold? Chinese individuals had fist to use their income to better their life and income distribution in China is not widely spread but rather concentrated in the Eastern major cities. 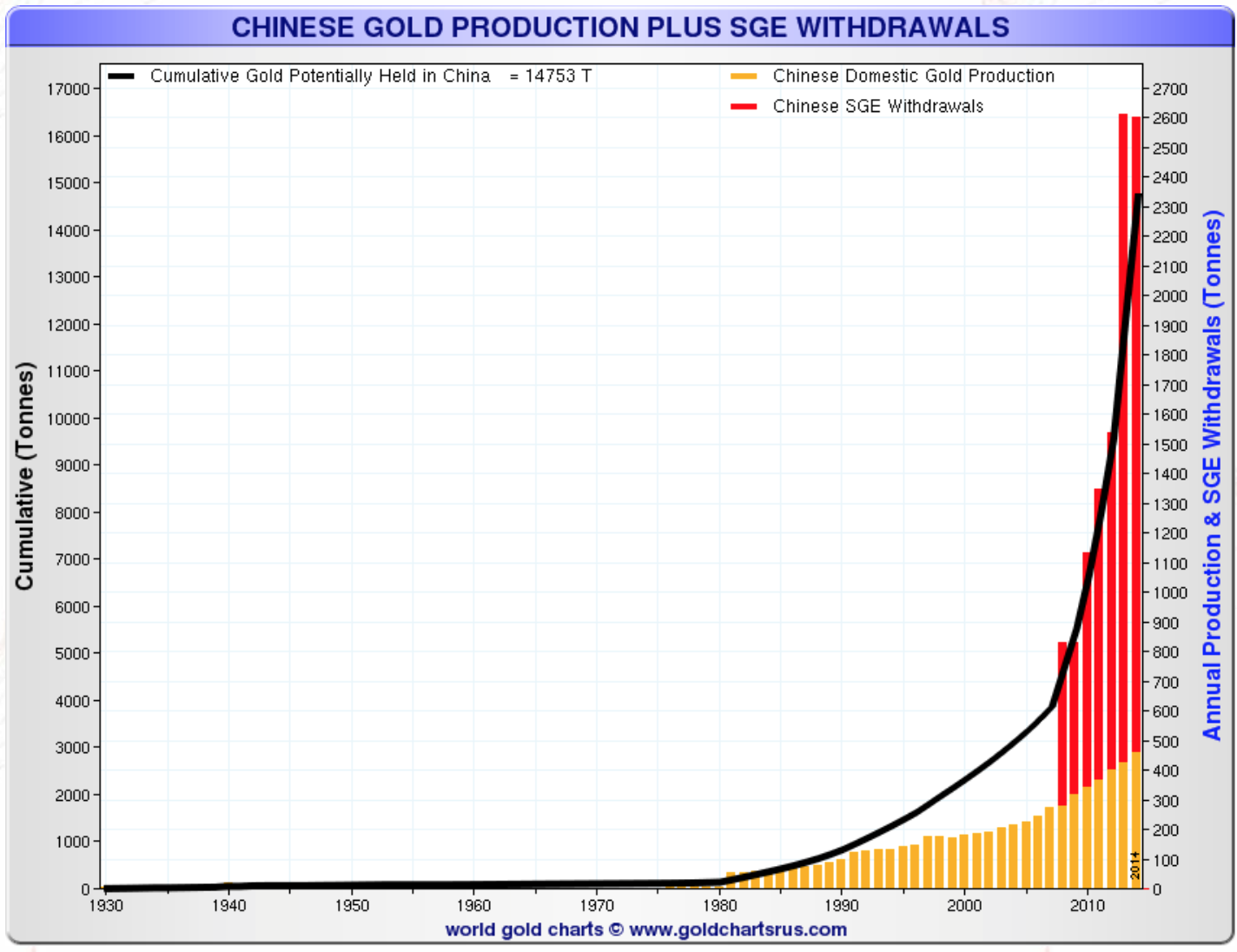 Julian D. W. Phillips (Gold/Silver Forecaster), estimates that the Chinese government can tell its citizens to hand over their gold to the government if in the interest of the state. I estimate that the Chinese government has under a different legal entity than the People’s Bank of China (PBOC) another 2,500tonnes of gold ready to be transferred into the PBOC account at the strategically opportune time. The PBOC, in a recent statement, according to the World Gold Council, repeated its position that, in addition to its direct holdings, China “holds gold through its people”. For those like me who lived under a totalitarian Marxist regime the underlined and bolded words speak loud and clear. China makes it clear it has a lot more gold under state control than it admits it publicly in a subtle way.

Why 4,000 tonnes? To understand this number I refer to several statements by Chinese officials or ex-officials. Song Xin, Party Secretary and President of the China Gold Association, wrote at Sina Finance on July 30, 2014 that “in order for gold to fulfill its destined mission, we must raise our gold holdings a great deal, and do so with a solid plan. Step one should take us to the 4,000-tonne mark, more than Germany, and become number two in the world; next, we should increase step by step towards 8,500 tonnes, more than the U.S.”. Therefore, a reasonable speculation, but still a speculation, would be that China has around 4,000 tonnes of gold in its possession or/and control already.

The Financial Times reports that the People’s Bank of China said on its website “Based on our analysis on gold’s value and price changes, and on the premise of not creating disturbances in the market, we steadily accumulated gold reserves through a number of international and domestic channels.” The PBOC also said, “The capacity of the gold market is small compared with China’s foreign exchange reserves; if foreign exchange reserves were used to buy large amounts of gold in a short amount of time, it will easily affect the market.”

These statements indicate China’s desire not to influence the gold price at least until it has achieved its final target of 8,500 tonnes. It seems it is not there yet. This announcement puts China slightly ahead of Russia but still far from the U.S. and the Euro Zone. It is now the largest holder of gold reserves of the BRICS (Brazil, Russia, India, China, and South Africa) countries. 4,000 tonnes would have put it in 3rd place worldwide, after the U.S and the Euro Zone. 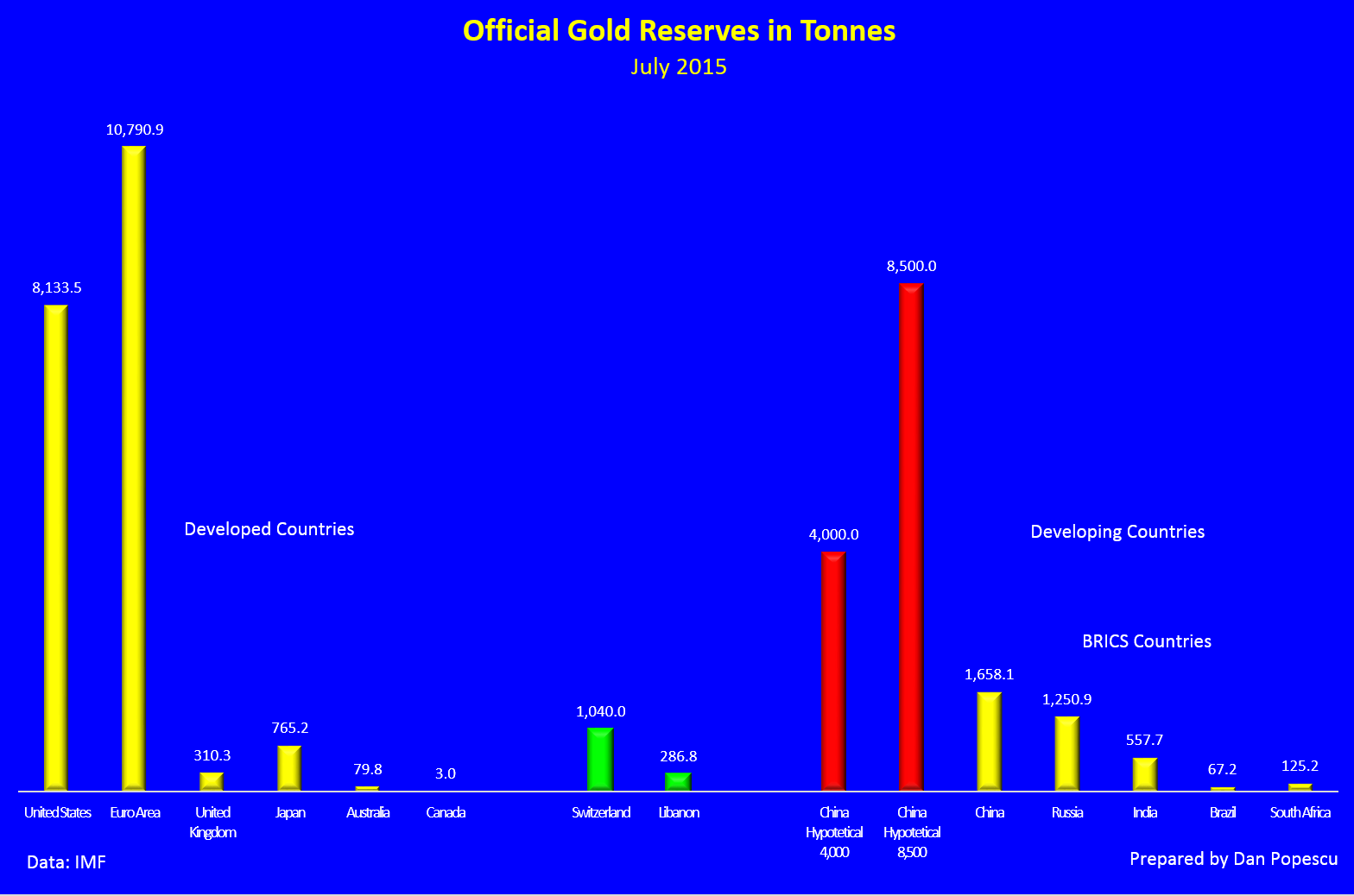 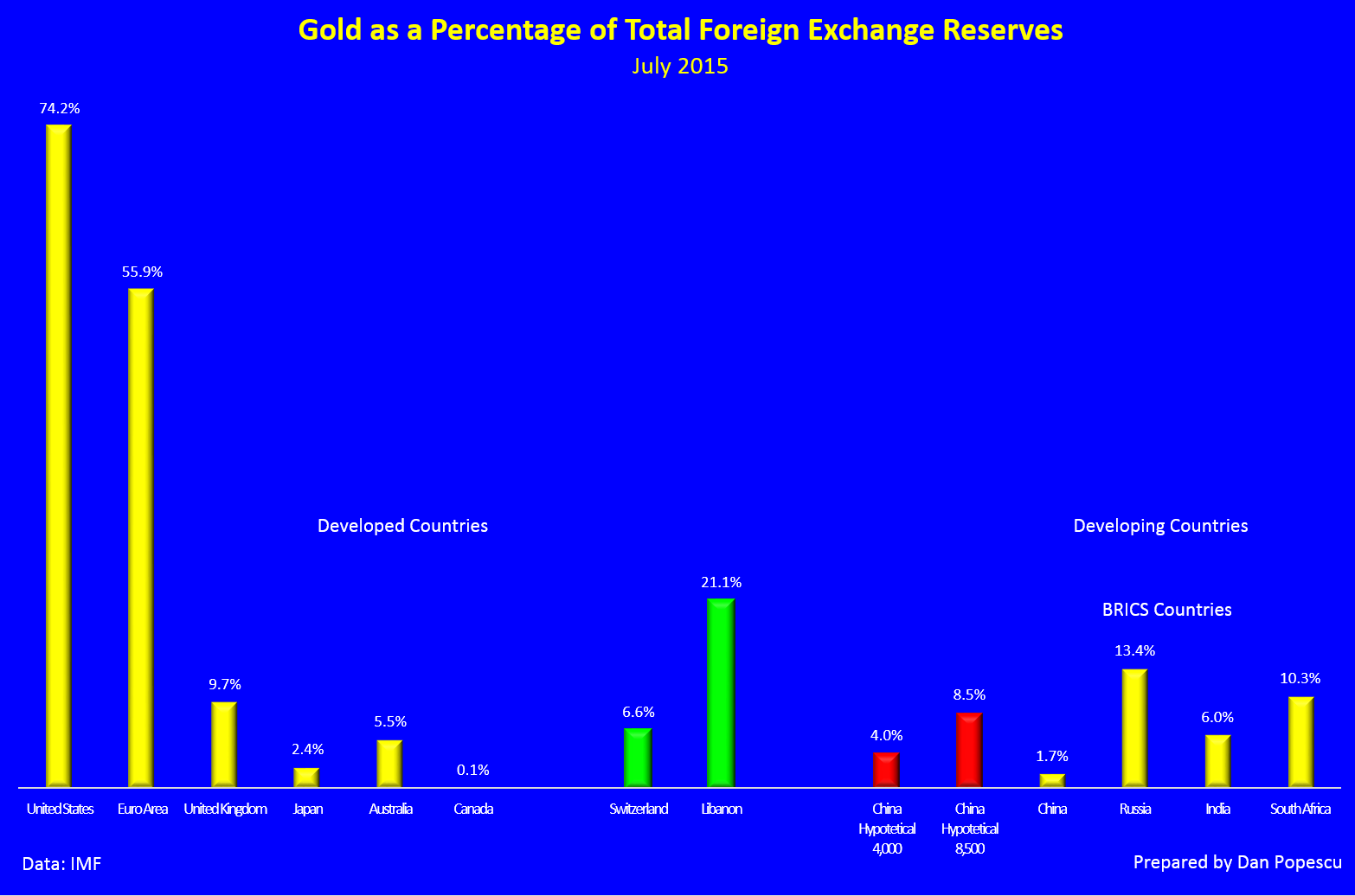 Looking at the gold reserves as a percentage of GDP, the announcement still keeps China with 0.6%, in last place within the BRICS countries and far from the U.S.’s 1.8% and Euro zone’s 3.2%. On the other hand,with 4,000 tones it would have brought China close to the BRICS average and close to the US’s 1.8%. 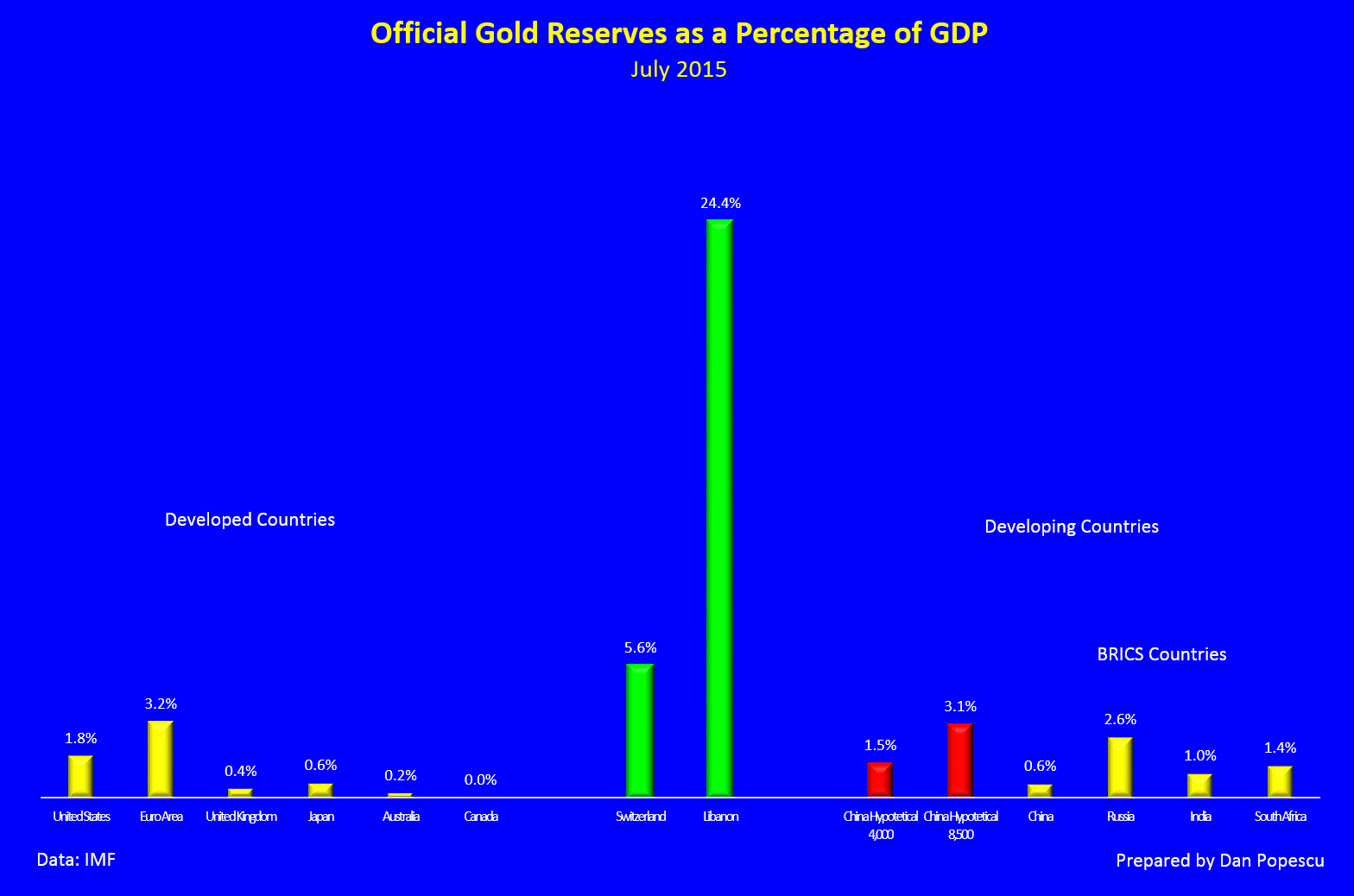 Why would China under-report its gold reserves and by so much? We are in the middle of major currency wars and therefore, also gold wars (gold is money and only hard currency). The present monetary system is broken and has been broken for quite some time. In 1971, President Richard Nixon ended the Bretton Woods Agreement and stated that “I have directed Secretary Connally to suspend temporarily the convertibility of the American dollar except in amounts and conditions determined to be in the interest of monetary stability and in the best interests of the United States.” Note the word “temporarily” that I underlined and bolded. This is 45 years ago. He also stated “In full cooperation with the International Monetary Fund and those who trade with us, we will press for the necessary reforms to set up an urgently needed new international monetary system.” Again I underlined and bolded “necessary” and “urgently”. More recently in 2015 at a conference in Seoul, South Korea, Ben Bernanke, former Fed chairman, told Jim Rickards, author of “The international monetary system is not coherent”: The 2008 financial crisis signaled we are getting very close to a “big reset” in the international monetary system.

In this context, it seems to me that the announcement is more of a good will one-off transparence gesture as the IMF is presently studying the possible inclusion of the Yuan in the SDR basket. All seems to indicate it is only a matter of time, not if it happens. However, the U.S. could still obstruct and delay it if not veto it outright. China could have positioned itself with this announcement for every eventuality. Nothing says that the next update would be only in five years. China can update its gold reserves at any time, even do another one soon after the inclusion of the Yuan in the SDRs before the end of the year. If the Yuan is de-linked from the US dollar, which will happen if the Yuan is included in the SDRs, China could make more regular announcements, as Russia does, of its gold reserves.

China wants to join the club of majors at the IMF but it certainly is not interested to be just a “junior” member leaving the “exorbitant privilege” to the US dollar. China has indicated repeatedly it doesn’t want to destroy the US dollar but rather bring it down to just another reserve currency. In this war, it has strong support from Russia. France, under the presidency of General Charles de Gaulle, tried it in the ‘70s but failed. France was effectively isolated by the U.S. in the international community. China and Russia are trying it today and they seem to have global support and, therefore, better chances. Since the 2008 financial crisis it is becoming increasingly evident that the present US dollar-based international monetary system is in need of a major update, and urgently.

Julian D. W. Phillips (Gold/Silver Forecaster), said in a recent article on MarketWatch, “To have a global multi-currency system, the expectation is that gold will act in a pivotal role alongside the US dollar, sterling, the yen and the Swiss franc – and, this year, the Yuan”. China has regularly indicated it agrees with this statement.