The DXY index, which measures the strength of the dollar against other currencies, is at its highest level since 2002 and exceeds the level reached during the Great Panic of 2020. 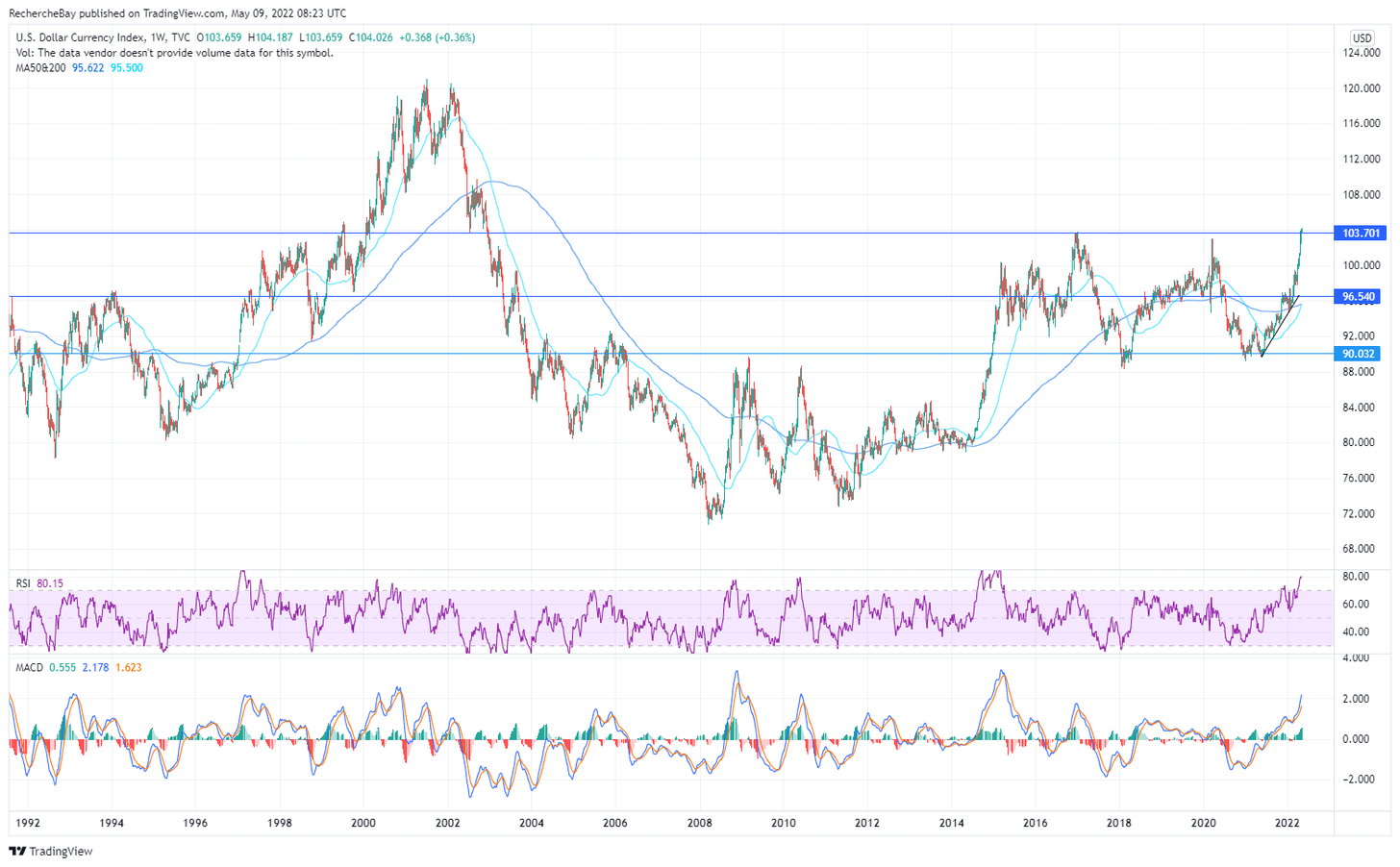 The dollar is benefiting from a drop in Chinese and German exports, which raise doubts of a recession in Europe and China in the coming months.

The U.S. is the only place in the world where export levels are holding up. This is a logical repercussion of the emerging Russian embargo and the resumption of U.S. exports in the fossil fuel sector. 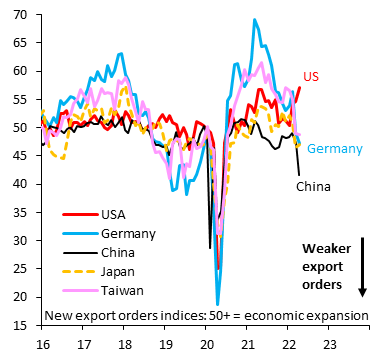 The positioning of central banks is also significantly different. The Fed is committed to raising rates, in a solitary manner, while the other central banks continue their policy of quantitative easing and low rates, despite GDP/balance sheet ratios that are much worse than the Fed's. The dollar is benefiting from this and appears today as the least worst of the fiat currencies! 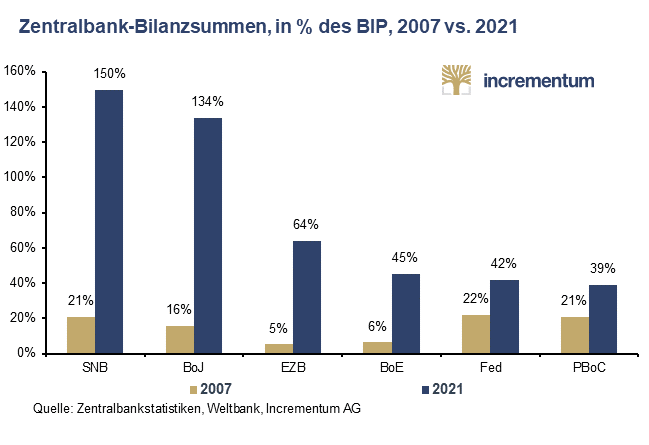 This gap between the United States and the rest of the world, combined with the current strength of the dollar, is widening the US trade deficit: 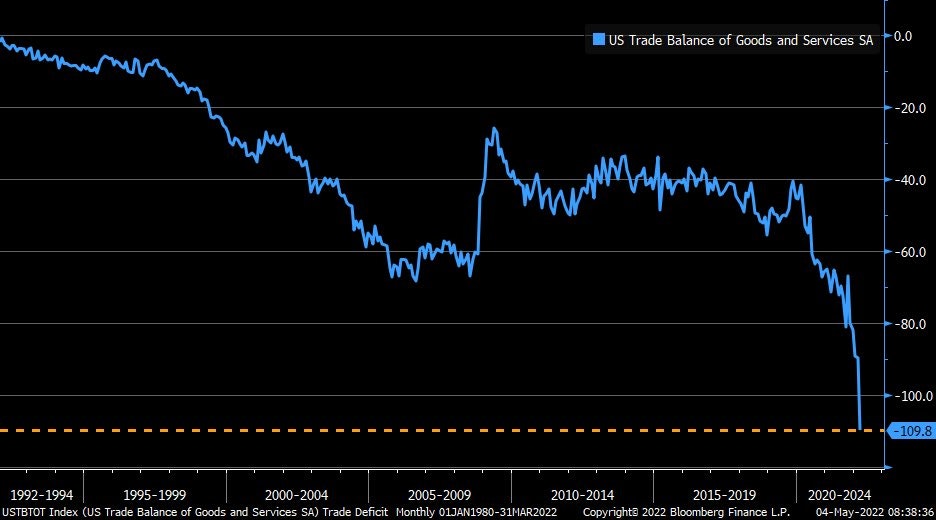 This is a dangerous phenomenon, as it further encourages the erection of tariffs, which in the long run will only increase the risk of inflation. The temptation for the U.S. government to impose more import taxes is very strong, at a time when tax revenues are stalling and debt service is soaring due to rising interest rates. By the end of the year, the U.S. Treasury will need $1 trillion to pay down debt that is coming due in the very near future. Issuing additional debt to pay off these maturities will be done in a very different context. Without Fed intervention in the markets, the price of new auctions is now much higher. The financing of US debt in these unfavorable conditions is a real concern.

In this uncertain context, the correction in the equity and bond markets is accelerating the movement. The liquidation of assets and the deleveraging caused by margin calls are strengthening the demand for dollars: all over the world, margin calls, which involve asset sales and force people to "go cash", mean a more substantial purchase of dollars.

Asset sales are accelerating in almost all segments. In the bond market, the corporate bond segment is now experiencing a drop comparable to that of March 2020: 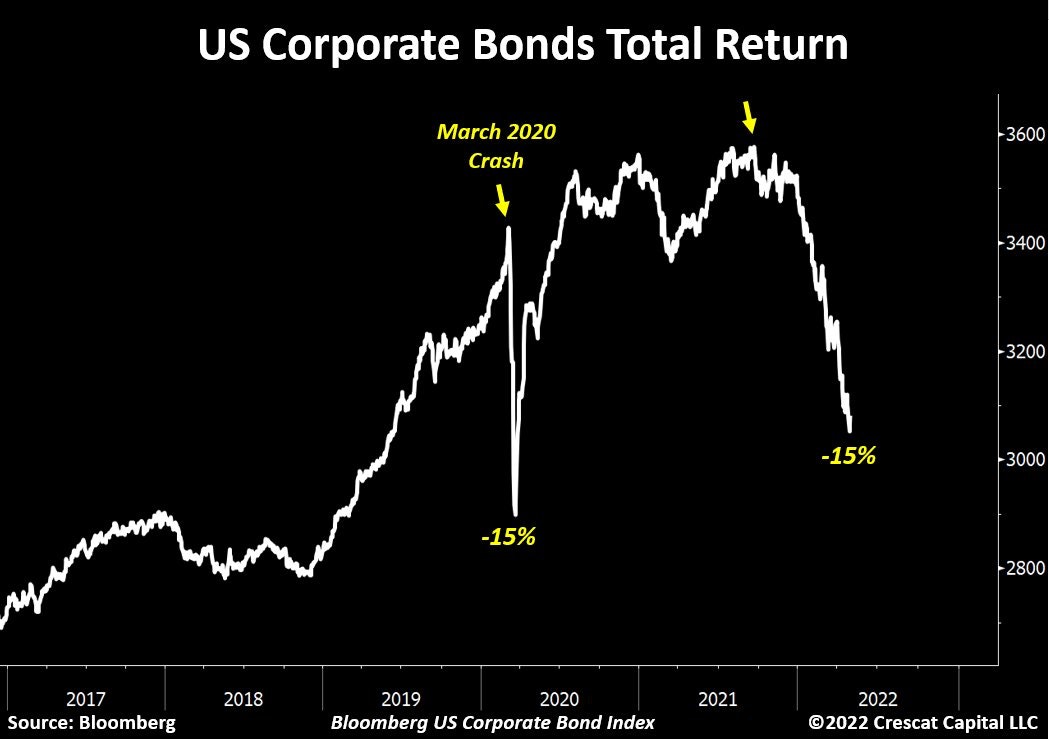 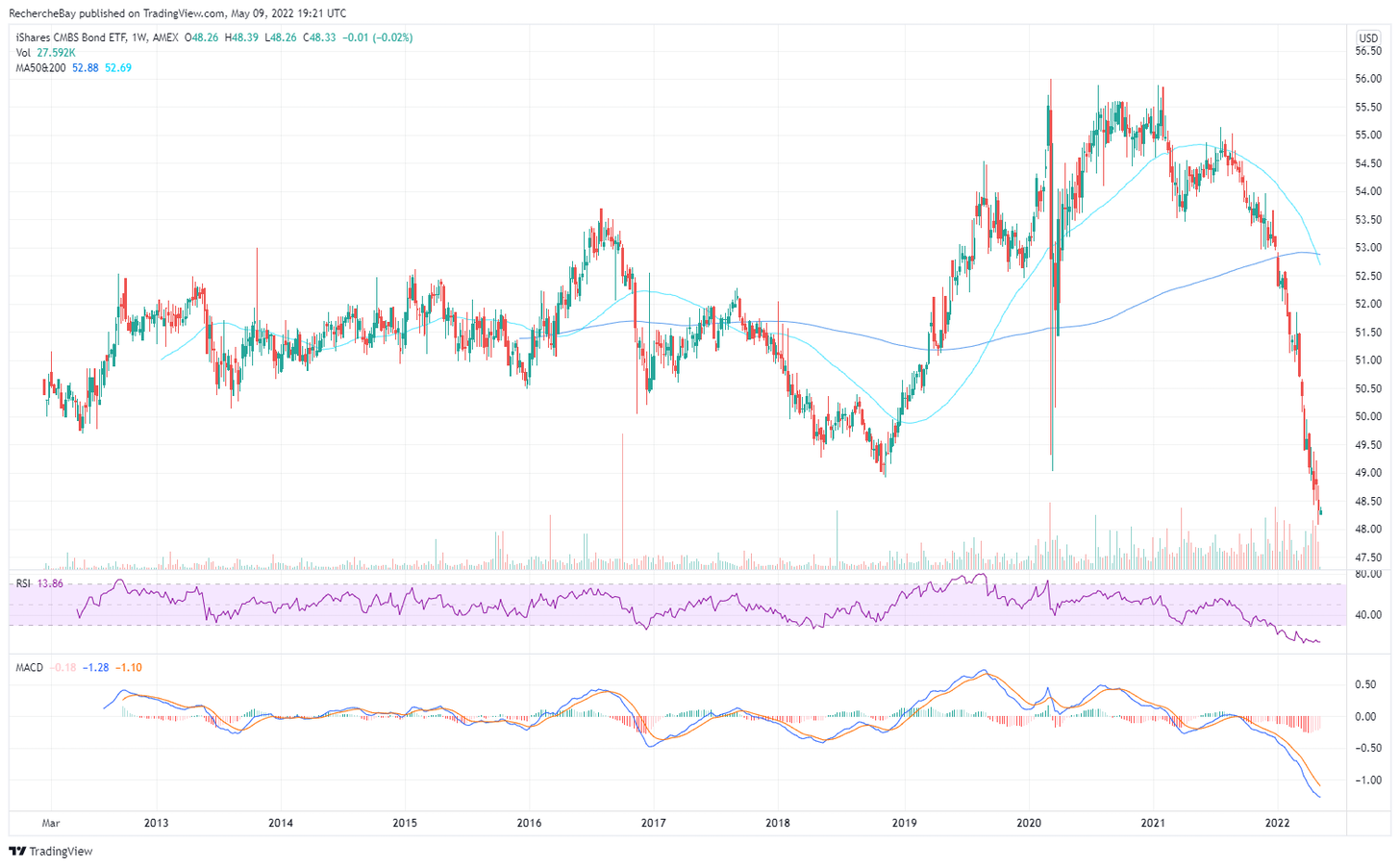 Without an intervention similar to that made by Jerome Powell in 2020, the collapse of the commercial real estate sector is in sight.

The last time we saw such a correction, the Fed had to intervene in a hurry to buy these assets (corporate debt and other bond products) in the midst of a collapse and avoid contagion to other financial products.

This time, the Fed sent the opposite signal by raising its key rates by 0.5%. The massacre continues in the debt market.

The configuration of the market correction is beginning to resemble that of March 2020.

However, this correction is much less abrupt and more controlled than in March 2020.

This can be seen on the silver/gold chart, which had deviated much more intensely in March 2020. For the moment, the ratio has not corrected sharply, and a bullish harmonic pattern target is even emerging on the daily chart: 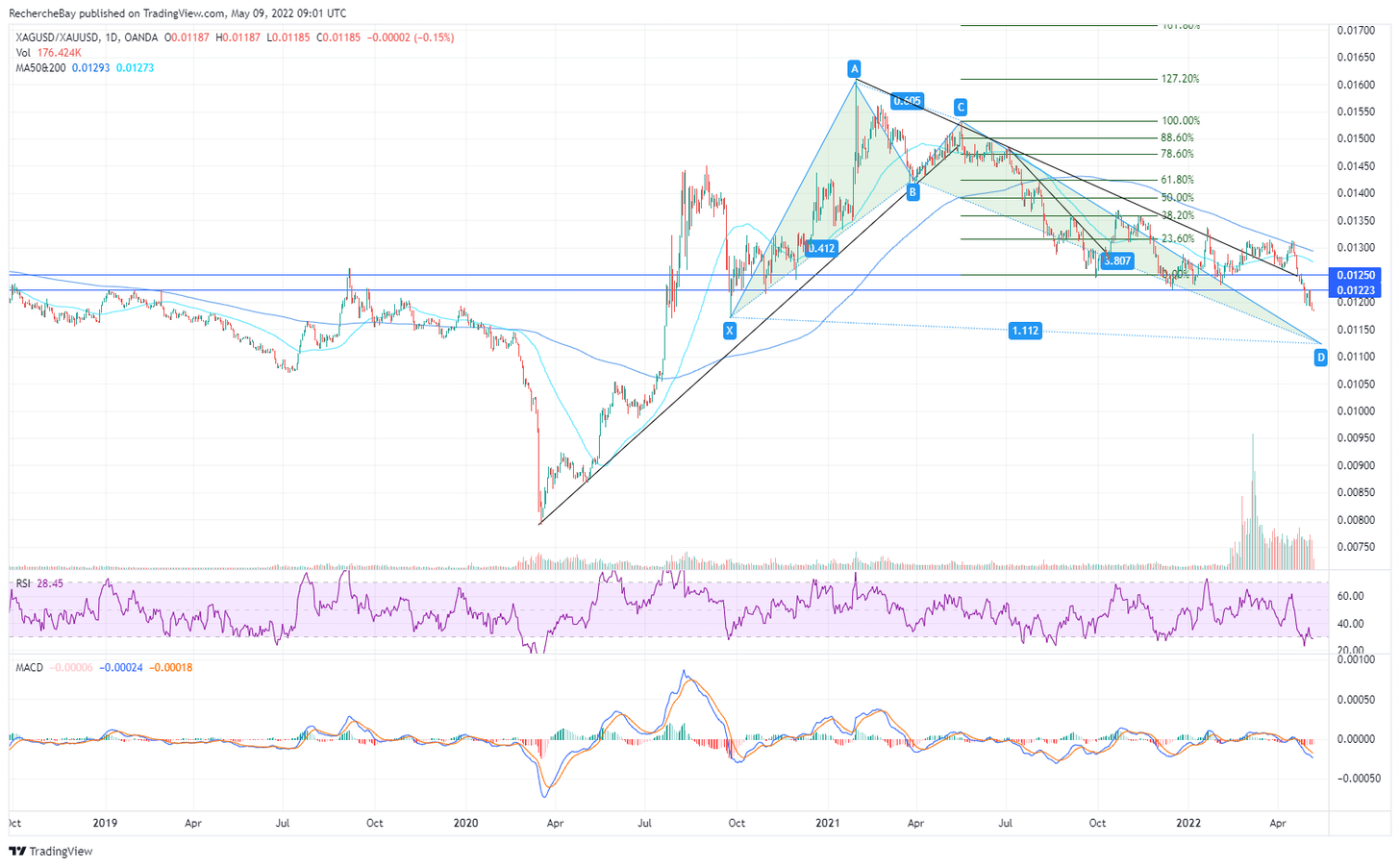 Short selling in silver futures has accelerated over the past two weeks. Support at $21.50 is holding, but the very bearish behavior of the silver miners still signals a lot of volatility in the futures. Silver shorts have a much lower target at $21.50. The miners have already anticipated this. Premiums on physical silver coins and bullion have yet to reflect this drop in the metal, which is very frustrating for investors!

The risk of counterparty default (ETFs, unallocated metal holders, certificates, metal accounts) during these "paper" position liquidation movements reinforces the investment in physical metal (which has no counterparty risk). Such a difference between the spot price and the physical price is usual in these liquidation phases, and the premiums applied to the physical metal reflect the existence of such risks. This reinforces more than ever the difference between paper metals and physical metals! It is not the same product, as we have said over and over again in these articles!

For its part, gold has still not broken its bullish support started in 2018. This is all the more remarkable given that all other assets (stocks, bonds) have, with a few rare exceptions, all technically already entered a bear market (-20% since their highs). The supports for gold are $1,835 (MA 200) and $1,815. 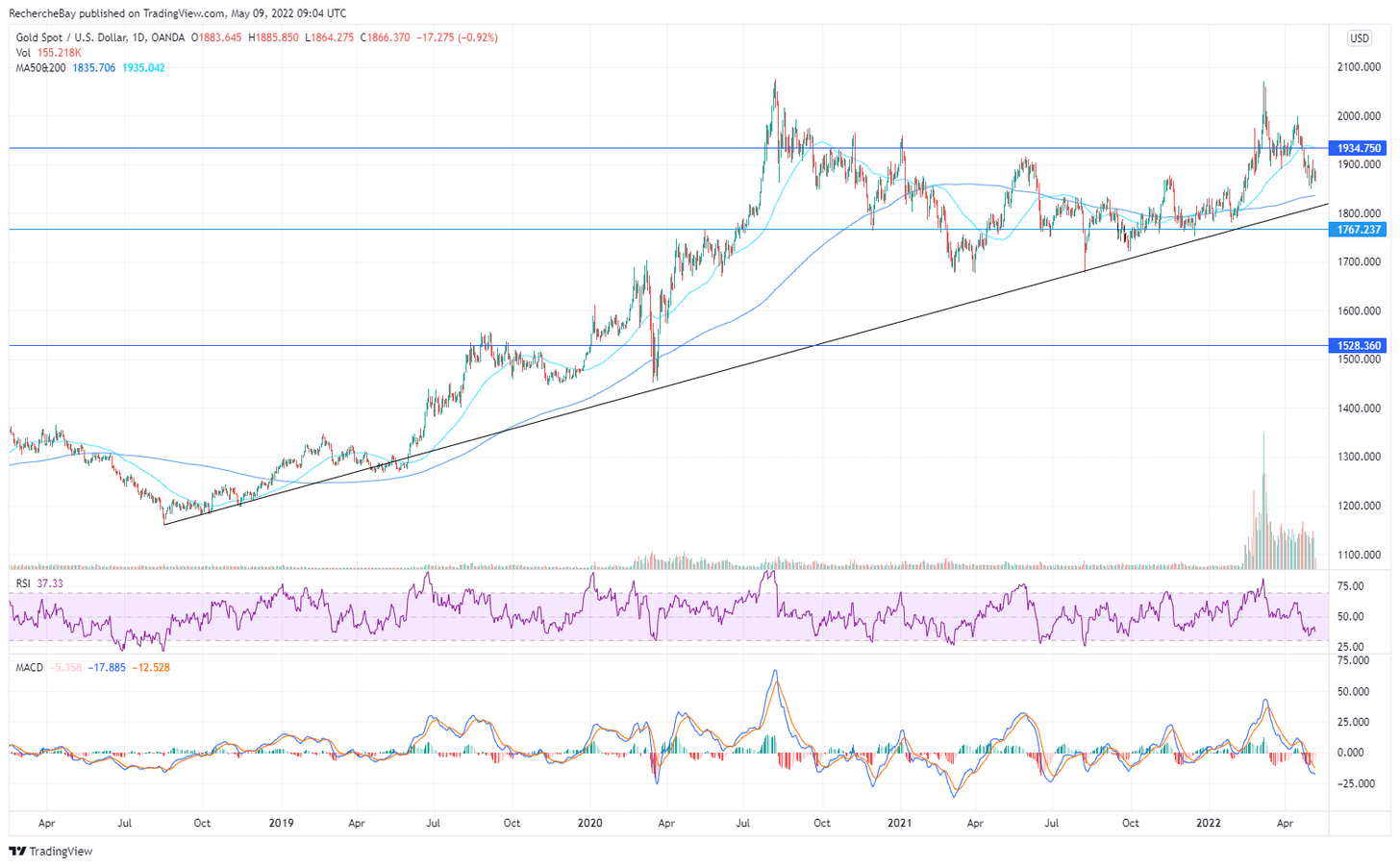 The shorts have much lower targets on gold, but so far have not been able to break the support. The last time the dollar had this kind of feverish outburst, gold finally broke down and corrected by -15%. Gold's relative resistance is remarkable.

Gold absolutely must correct by another -10% (at least in dollars) to invalidate powerful bullish setups in other currencies.

Gold in yen is forming a bullish flag that must be invalidated or it will catapult gold in Japanese currency into a bullish move, which would destroy what little confidence investors have left in the BoJ's ability to defend its currency. 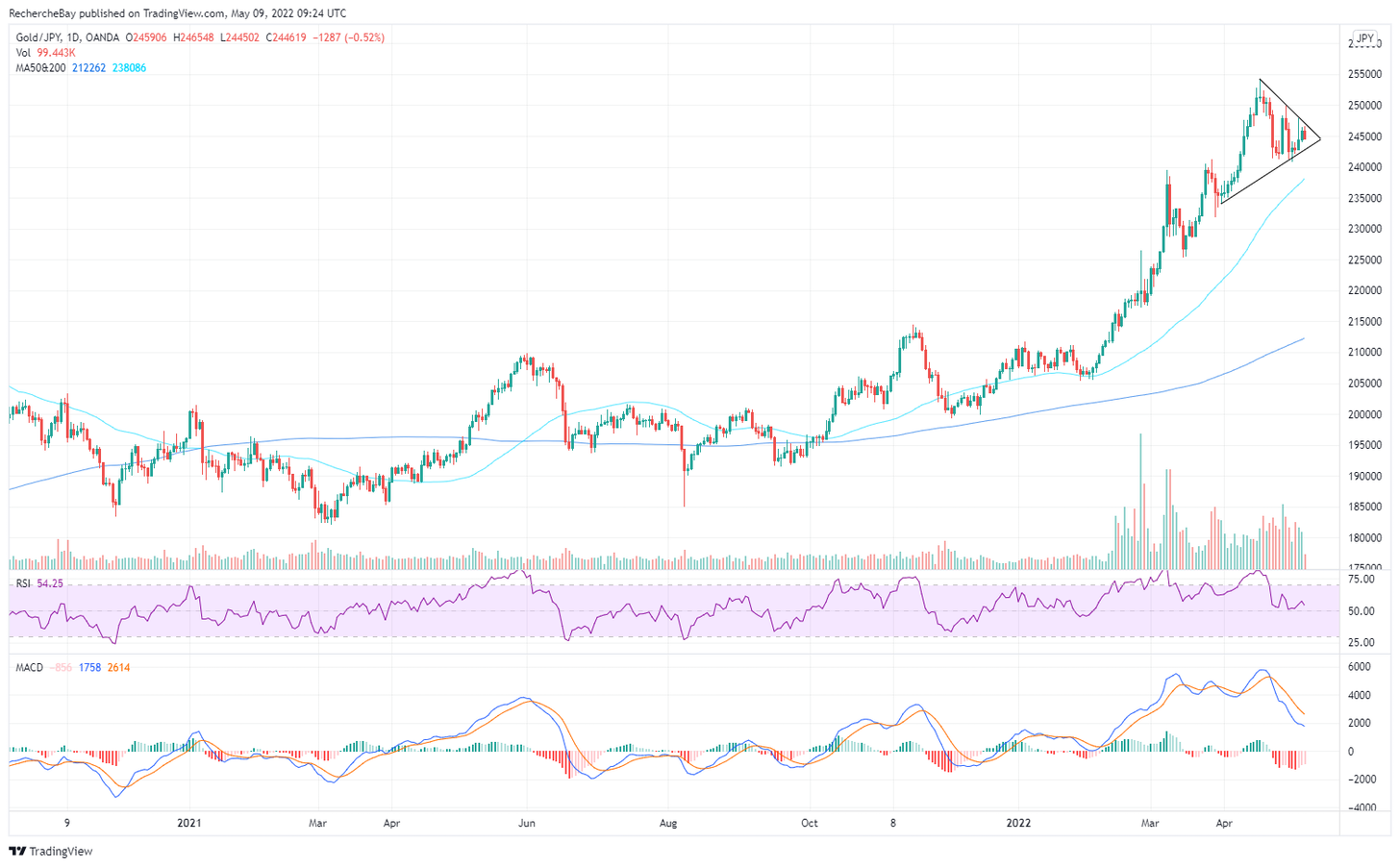 The gold correction is a matter of credibility for the Japanese central bank. It is quite logical that the first central bank to engage in this famous modern monetary policy of quantitative easing (which has brought us into such a perilous situation in terms of inflation) is also the first to face a major challenge on the confidence of its currency. The first bank to experiment with QE is now the first to be held accountable. Its monetary policy of rate control has a direct influence on the depreciation of the yen, which reinforces inflation and increases the efforts to control rising rates. In other words, the more the BoJ controls rates, the more inflation risks become apparent, as the yen now reacts negatively to the divergence in monetary policy. If inflation picks up in Japan, the entire central bank program would have to be corrected urgently.

Inflation figures will probably still be very high in Europe and the United States, especially because of record high fuel prices. But it is the Japanese inflation numbers that now need to be scrutinized. If Japan suffers the same inflationary shock that we are experiencing, the Japanese central bank will have to stop its monetary adventure, which will put a definitive end to the carry trade (speculative operation on yield spreads). Under these conditions, the first signs of liquidity and credit tensions observed at the beginning of this month are likely to rapidly turn into a systemic crisis. Inflation is an even greater risk in Japan, as it threatens one of the pillars of the current financial system.