We recently talked about the fall of the euro, and things are likely to accelerate in the coming months, mainly due to the disappearance of the eurozone's external surplus. The eurozone's trade balance has always been largely positive since the creation of the single currency (except during the crisis of 2008, but the effect was limited), particularly thanks to the export performance of German industry. But all this is changing with the explosion in energy and commodity prices. The trade balance has bottomed out and is still sinking: 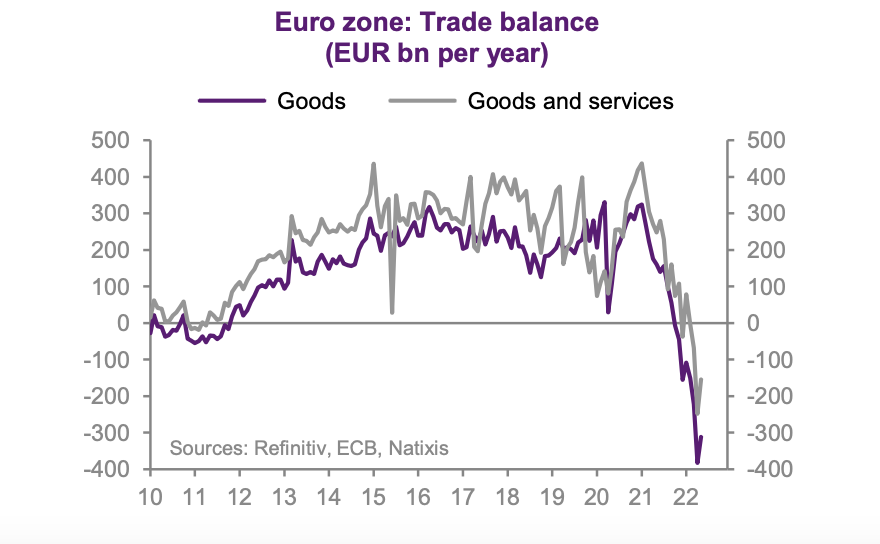 The effect is twofold: the rise in the price of raw materials increases the amount of imports, and it reduces the level of exports because goods produced in Europe become more expensive, less competitive. As the fall in the euro imperfectly compensates for this rise in production costs (it is not thanks to a weak currency that we export more, but rather thanks to intrinsic competitiveness), imports are increasing while exports are falling. As a result, the surplus, which has been comfortable until now, will fall to zero during 2021 and then plunge into the red at high speed.

The consequence for the price of the euro is devastating, as stated by Natixis:

- "The eurozone is becoming poorer, because instead of accumulating external assets, it is paying income to countries exporting oil, gas and other commodities;

- structurally, in the long term, the euro will depreciate as the accumulation of external assets comes to an end."

The United States, which is energy independent, is not affected by this phenomenon (and the dollar is rising against other currencies). Nor are the emerging countries that hold raw materials. Only Europe has been hit hard (especially since it is forbidden to exploit its shale gas). Japan is also affected, with an external surplus that is also shrinking (we can see the yen falling). To a lesser extent, China, which remains globally dependent for its raw material supplies, is experiencing weak growth, the prelude to a shrinking trade surplus.

This is what is known as "imported inflation": when the euro falls, the price of raw materials rises because they are denominated in dollars. Unfair? That's how it is, the euro has not managed to impose itself as an international settlement currency (in this domain as in many others, geopolitics, i.e. American power, prevails). A vicious circle is being set up between the trade balance, the euro rate and the level of inflation.

Government officials speak of a "peak" in inflation... But inflation is here to stay, because its causes are still present: the money printing of central banks to finance budget deficits (which are not decreasing), the energy transition which increases the price of electricity (cost of wind turbines, which continue to be installed), the ill-considered sanctions taken against Russia (imposing a blockade on itself is original), shortages (gas, oil, semiconductors), and now the fall in the value of the euro. Meanwhile, the timid rise in interest rates initiated by the ECB does not carry much weight.

We have to prepare ourselves for sustained inflation, higher than today, not to mention shortages. Enjoy the summer vacations, as the return to school may be complicated...