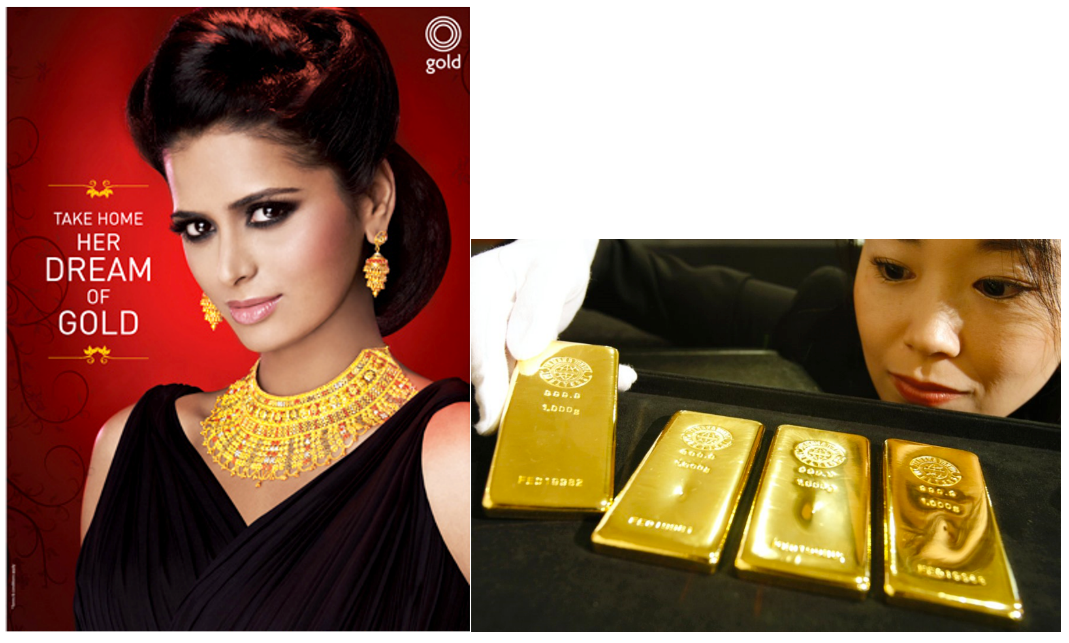 The most misunderstood so-called “investment” instrument is gold. Not only by the general public, but even by investment analysts. Even very recently I heard an analyst on CNBC saying gold is valueless, since it doesn’t declare dividends or produce any income. I heard this kind of argument in the ‘90s, in reference not to gold, but to technology companies. I could not understand then how someone could look at a company like Intel or Microsoft and say such a thing. These were not uninformed investors but investment professionals with university degrees in finance or economics, an investment certification and an MBA. It made no sense to me. Both companies were already making a lot of money. Finally, one day, one of them completed his statement by saying that it cannot fit the dividend discount model used by the investment profession to calculate value.

Since the equation required dividends, if there are no dividends then the value is zero. Rather than going back to the drawing board and finding another equation that fits the real world, they chose to pretend that anything that doesn’t declare dividends is valueless. This is how, today, they can look at gold, that has been exchanged and valued for at least 5,000 years, over most of the planet and by people of different cultures and levels of education, and say it is valueless. I guess that if you ignore reality and live in an imaginary world called “nominal”, it is possible. But in the real world gold has value, recognised in time and space. Still, I do not consider gold as an investment but rather as hard cash versus fiat cash (US dollar, euro, yen, etc.) and a store of value. I consider gold mining companies as investments.

Another misconception used very often by anti-gold supporters is that it’s mostly jewellery with no other use but for fashion or beauty. The two main uses of gold are jewellery, but also money (hard cash). It is said that gold has two trades: the love trade (jewellery) and the fear trade (hard cash), or a combination of both. It is true that the industrial use of gold is very insignificant, with only 8% of total demand. 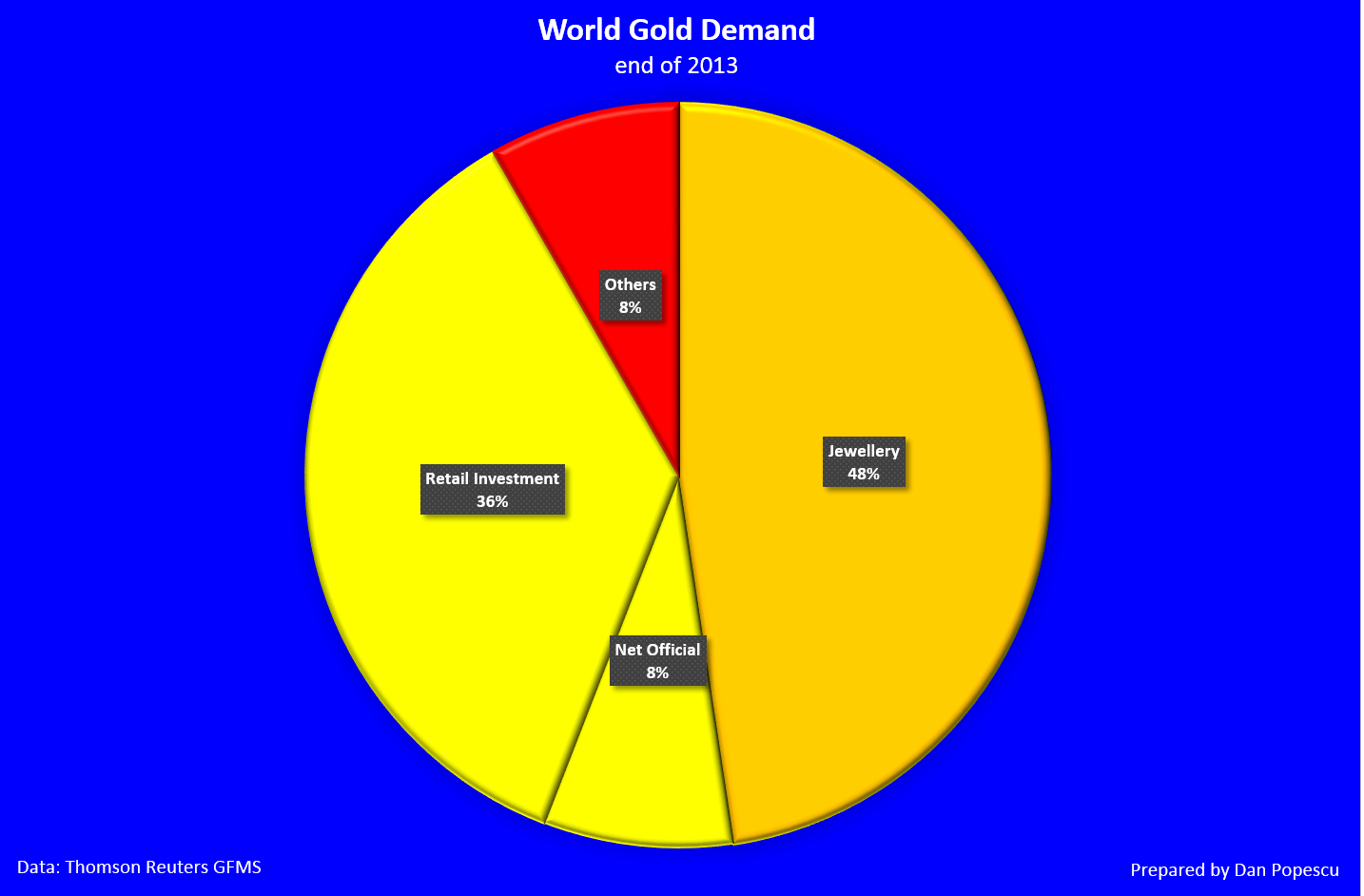 If we look at the global gold demand, it is mostly split in two: investment demand and jewellery demand. But is this a correct description of the actual demand for gold? No, it isn’t. Jewellery demand is not what it appears to be and neither is investment demand. The two next graphs show that in the two main gold markets, India and China, jewellery demand represents an average of 84.5%. Both India and China represent 54% of total gold demand and, if we add the rest of Asia and the Middle East, it represents 73%. However, in all these countries, gold jewellery is bought not mainly for beauty and fashion, but as a store of value (hard cash). In Western financial language we call it investment demand. But that is not quite correct. There is a difference between an investment from which we expect a profit and cash from which we just expect it to maintain its value over time and space. A large part of the jewellery demand worldwide is as a store of value.

According to the World Gold Council (WGC), in the last decade, 75% of gold demand in India has taken the form of jewellery. Also, according to the WGC, “To make a distinction between investment and jewellery demand is to misunderstand Indian attitudes; they are often the same.”(1) This is true not only in India but also in China, the rest of Asia and also in the Middle East. The majority of Indian gold jewellery demand is still 22 carat (91.6% purity) with 18 carat (75% purity) being a recent phenomenon and constituting less than 10% of the total domestic gold demand.(2) This is also the case in the rest of Asia and the Middle East. The very high purity of gold demand indicates that it is acquired more as a store of value and less for jewellery purposes. Jewellery above 20 carat gold is not very durable because of gold’s physical characteristic of being very malleable. But if you store it and not wear it then it makes sense to hold gold in its purest form possible. 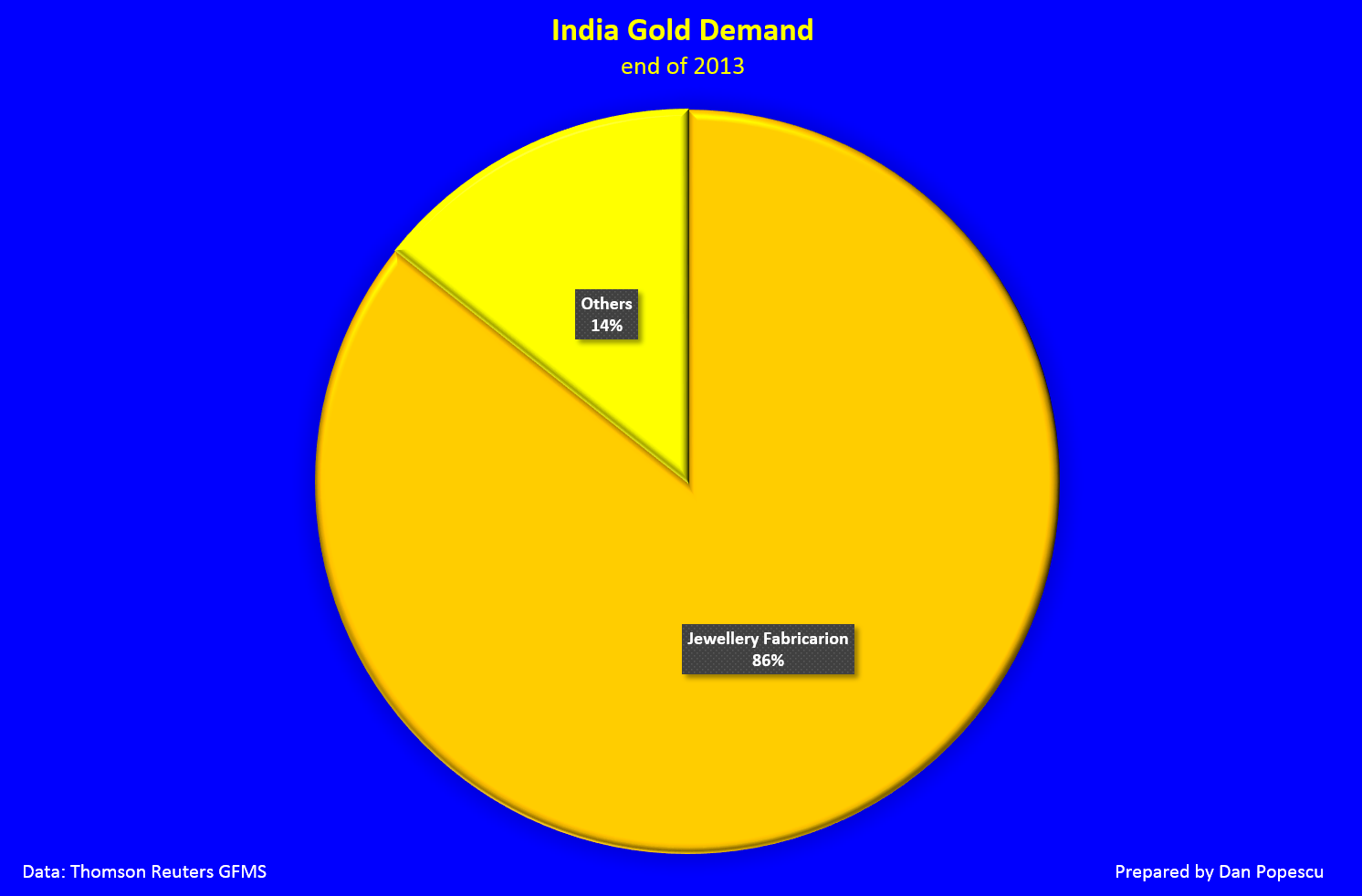 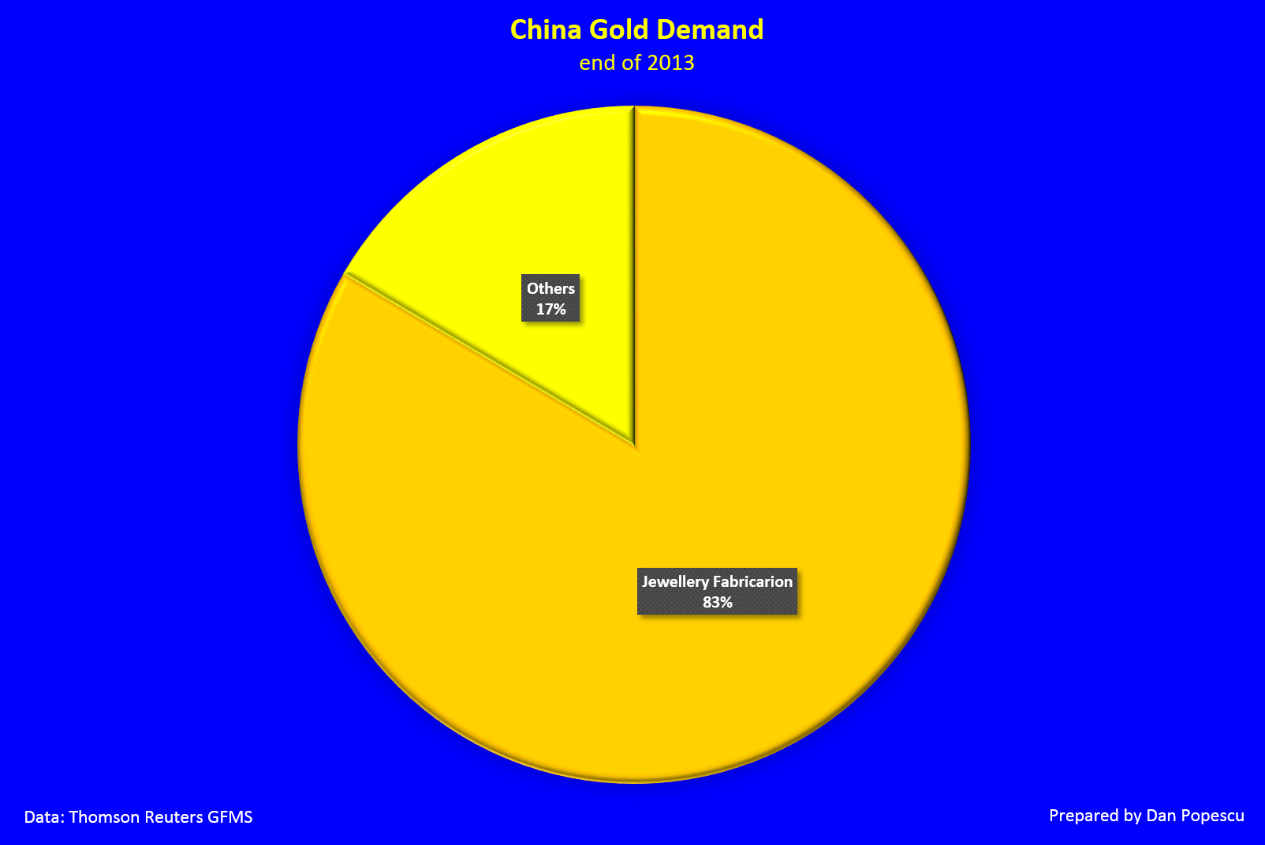 From an analyst’s point of view it is almost impossible to determine how much of the gold jewellery is for investment/store of value purposes (fear trade) and how much it is for jewellery purposes (love trade). I would easily speculate that both in India, China, the rest of Asia and the Middle East, more than 80% of jewellery demand is for store of value purposes and almost all of the 22 carat gold and higher is for store of value. This is not the case in Europe and North America where most, if not all, of the jewellery demand is for the love trade.

Gold bullion is bought in North America mostly for investment purposes and speculation, while in Asia and the Middle East, it is bought mostly as a store of value. Europe, in the recent years, has come closer to the North American mentality but not to the same extent. The store of value aspect of gold is still fresh in the European way of thinking. Wars, revolutions, nationalizations, devaluations of currencies are still very fresh in European minds.

As you can see, this categorization of gold into investment demand and jewellery demand might make an accountant’s job easier, but it distorts information. Investment demand also doesn’t make the distinction between gold bought for store of value versus investment/speculation purposes. More and more people, but also central banks, scared of a collapse of the present monetary system, accumulate gold to preserve wealth rather than for investing or speculating.