Robert Mundell, Nobel prize economy laureate, said while accepting his prize in December 1999 that “The main thing we miss today is universal money, a standard of value, the link between the past and the future and the cement linking remote parts of the human race to one another.” (1) He also reminded us that gold has played this role since the times of Roman Emperor Augustus until 1914, and that “... the absence of gold as an intrinsic part of our monetary system today makes our century, the one that just passed, unique in several thousand years.” (2)

Prior to the First World War, the pound Sterling was the top currency, due to the economic strength, the gold reserves and the geographical size of the British Empire. The United Kingdom’s debt, before WW I, stood at 29% of GDP but, after WW 2, it exploded to 240% of GDP.

In 1944, after two devastating wars, especially for Europe, an international monetary conference was organized at Bretton Woods, United States, in order to create a new international monetary system. At the time, Great Britain was weakened by the war, while United States had suffered almost no damage, its debt level was acceptable, and had a budgetary surplus and large gold reserves. As Benn Steil describes in his book, The Battle of Bretton Woods, the U.S. used this strong position to impose on the British and the rest of the world a monetary system based on the US dollar and backed by gold.

Thirty years later, due to bad public management and two very costly wars (Korea and Viet-Nam), the pressure on the dollar became unbearable. Under pressure from international requests for converting dollars into gold in 1971, President Nixon closed the « gold window » and, thus, ended the Bretton Woods agreements. A return to the gold standard was proposed by General de Gaulle, president of France, who stated in a 1965 speech :

“The time has come to establish the international monetary system on an unquestionable basis that does not bear the stamp of any country in particular. On what basis? Truly, it is hard to imagine that it could be any other standard than gold.

Yes, gold whose nature does not alter, which may be formed equally into lingots, bars or coins; which has no nationality and which has, eternally and universally, been regarded as the unalterable currency par excellence.” (3)

But, sadly, this didn’t happen and, since then, we are on a standard of fiat US dollars without any real backing (gold or gold and silver), which gives the United States an « exorbitant privilege », as said then by finance minister and future president of France, Valéry Giscard d’Estaing. The american deficits and debt have become exorbitant and, consequently, the dollar-based international monetary system is doomed to fail soon. As far as I am concerned, the question is not if, but when and how this « dollar » system will collapse. In any case, whatever the result, it is now obvious that gold will be part of the new monetary system, one way or another. Until then, the price of gold will rise against all the paper fiat currencies, because gold loves chaos and uncertainty.

What will the new monetary system look like ? There are several scenarios and they all depend on how the crisis will unfold and how the transition will take place. Robert Mundell predicted in 1999 that “Gold will be part of the international monetary system in the twenty-first century.” (4) Gold will regain its traditional role of universal money when the US dollar, the euro and the yen will no longer function as acceptable means of payment at the international level. This now seems to be the case, because every country is indebted to a maximum level. They have all printed money « to infinity ». The two charts below show the evolution of the U.S. public debt and the gold price since 1970, and the current balance of payment of several countries. 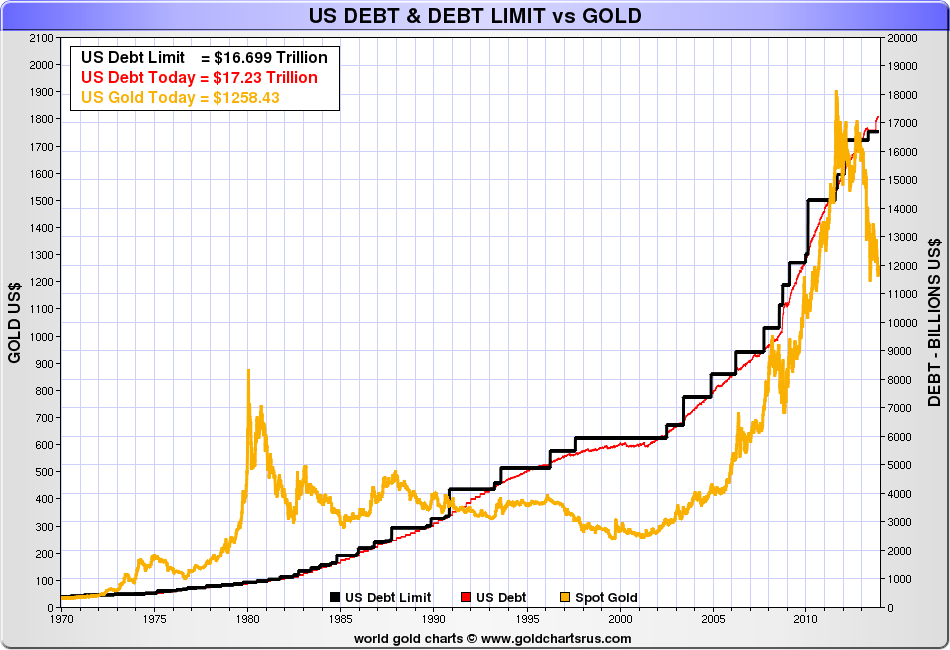 A catastrophic scenario would be a total collapse of the US dollar caused by deflation or hyperinflation. In such a case, I would see gold become a pure de facto standard, since there is no other fiat currency strong enough to replace the dollar, as we speak. Moreover, the fall of the US dollar could drag with it other currencies like the euro, the pound, the yen, etc...

Another less drastic scenario would imply a series of negotiations similar to the Bretton Woods conference under the auspices of the IMF, prior to a total collapse of the dollar. Some studies have already proposed a kind of international currency in the form of Special Drawing Rights (SDRs) issued by the International Monetary Fund. Jim Rickards, in his book Currency Wars, seems inclined to think that this would be the most likely scenario. A version of this scenario includes a portion of gold (20 – 30%). Another version calls for an international currency partly backed by gold. A possibility would also be a transition period with several reserve currencies (dollar, euro, pound, yen, yuan, ruble etc), without one dominating the others, but it would be very unstable and short-lived. However, even in that case, gold would play a very important role. In order to boost confidence in their currencies, countries will be buying gold for their monetary reserves.

All indications, even though governments, via their monetary agents such as central banks, deny it publicly, point toward gold as being accumulated in order to be better positioned in this future international monetary system. Emerging countries are the most active on the gold market, because right now they don’t have much gold in their reserves. Both China and Russia have indicated, not only in words but also by their purchases that gold is at the core of their reserve currency strategy.

We are now in the midst of major changes that occur only once in a hundred years. One of those changes is occurring in the monetary realm and, particularly, in everything that has to do with paper money. Through constant abuse, the sovereigns have in a hundred years, totally destroyed the reputation and, therefore, the value of their currencies. Moreover, that happened because faith/trust, is the only strength any fiat money has. In order to regain this trust, there is no other choice but to come back to a real basis, and the only one that has been successfully tested for 5,000 years, acknowledged and respected the worldwide, is gold and silver.

“When all else fails, possibly including a new SDR plan, gold is always waiting in the wings as a stable, widely accepted store of value and universal money. In the end, a global struggle between gold and SDRs for supremacy as “money” may be the next great shock added to the long list of historic shocks to the international monetary system.” (5) Jim Rickards

The chart below gives some indications of the US dollar value with a return to a gold standard. Backing the US dollar 100% with gold would cost $11,384 per capita, whereas a 40% backing would represent $4,554. 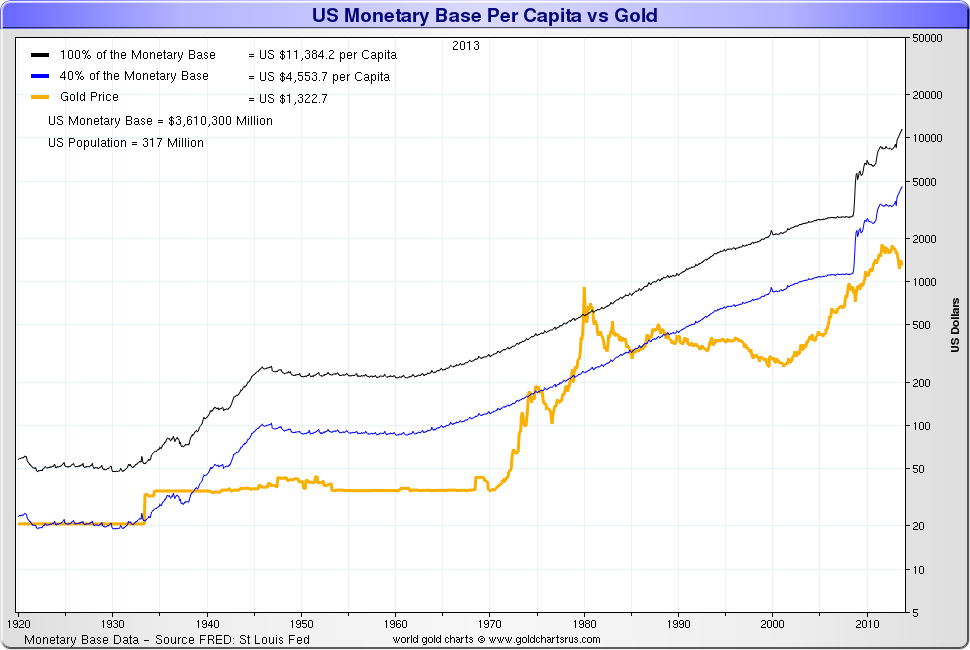 In 1944, we witnessed a power transfer from Great Britain, the « empire on which the sun never sets », loaded with debt and torn by the war, toward the United States. Much in the same way, today, we’re witnessing a transfer from the American empire, also loaded with unpayable debt and the cost of many wars, toward China. On the international front, we are witnessing the same arrogance toward China from the United States that the United Kingdom had toward the United States at the time, as described very well by Benn Steil in his book on the Bretton Woods negotiations.

Amidst these geopolitical and monetary secular changes happening, gold will shine again in its historical role of debt extinguisher and stable monetary haven. However as this secular monetary crisis unfolds, it is evident that gold will be priced much higher than today in relation to fiat currencies. 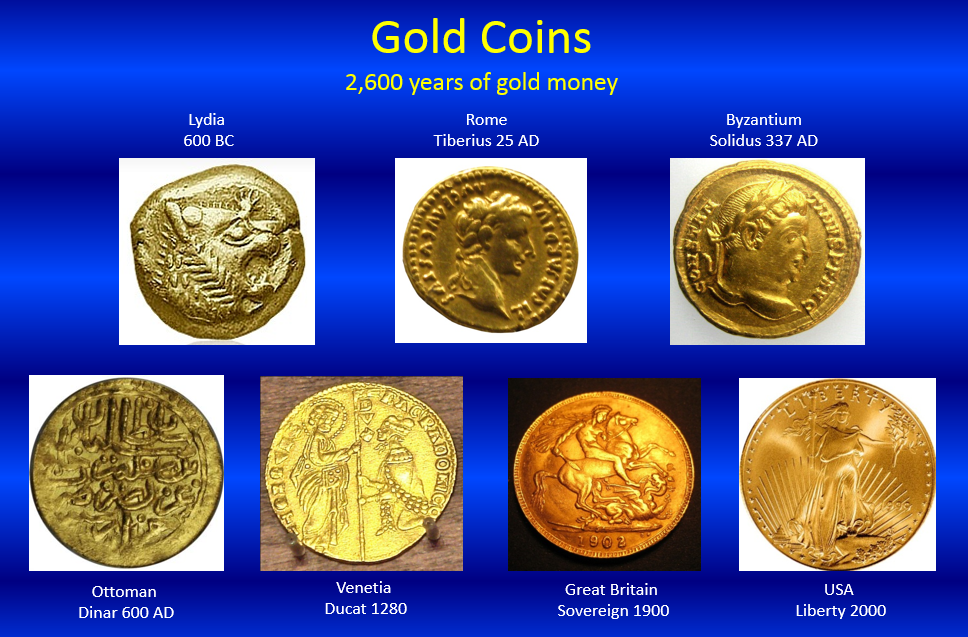