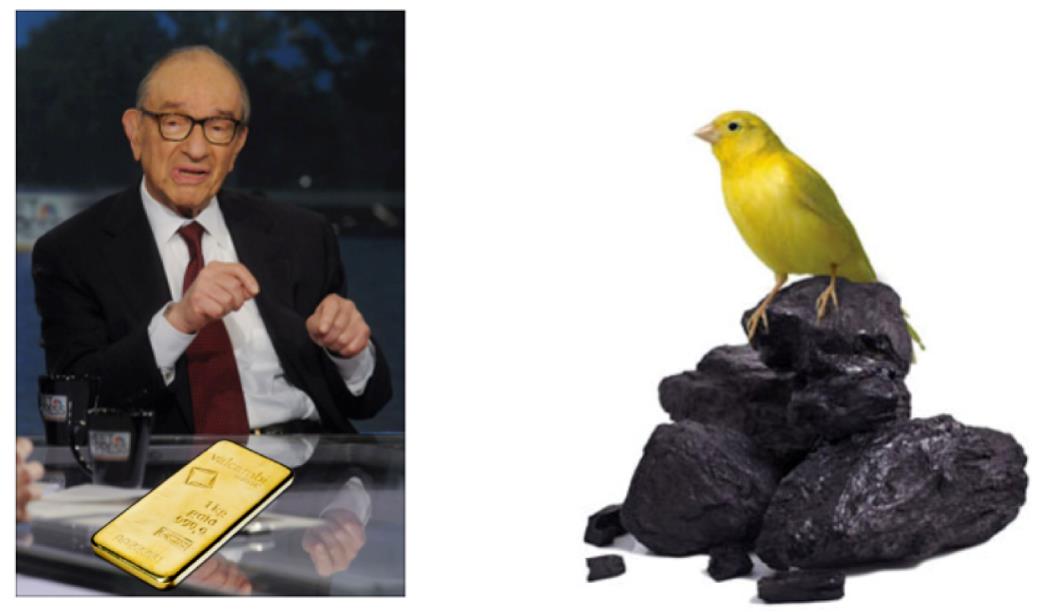 Alan Greenspan, the venerable former Federal Reserve chairman, speaking to the U.S. Congress in 1999, said, "Gold still represents the ultimate form of payment in the world. Fiat money, in extremis, is accepted by nobody. Gold is always accepted."

In 2002, in a speech given before the Economic Club of New York, Mr. Greenspan also said, “As recently as a decade ago central bankers, having witnessed more than a half-century of chronic inflation, appeared to confirm that a fiat currency was inherently subject to excess.” He confirmed what Aristotle stated 2,500 years ago when he said, “In effect, there is nothing inherently wrong with fiat money, provided we get perfect authority and god-like intelligence for kings.”

Rick Santelli, from CNBC, said, "I can't remember the exact quote, but when I used to trade and Mr. Volcker was Fed chairman, he said something like 'gold is my enemy; I'm always watching what gold is doing.' We need to think why he made a statement like that. If you're a central banker or one of the congressmen or senators, watch what gold is doing because this is a no-confidence vote in fiscal and dollar policy." However, gold is not only the enemy of the dollar but also of the present international monetary system based on the US dollar since the collapse of the Bretton Woods Agreements in 1973. In the recent past people were shifting between the dollar and the German mark and, now, the euro and the Swiss franc, but since the 2008 crisis cash has been moving into gold.

During the 2008 crisis several transactions of the Bank for International Settlements (BIS) involved gold. What is significant in this is that gold is being used in international settlements again after so many decades of being sidelined in the monetary system. Gold’s old emergency usefulness has resurfaced, albeit behind closed door sat the BIS in Basel. The transactions themselves confirm that gold is being used in this manner, which is a dynamic confirmation of gold's return to the monetary system. 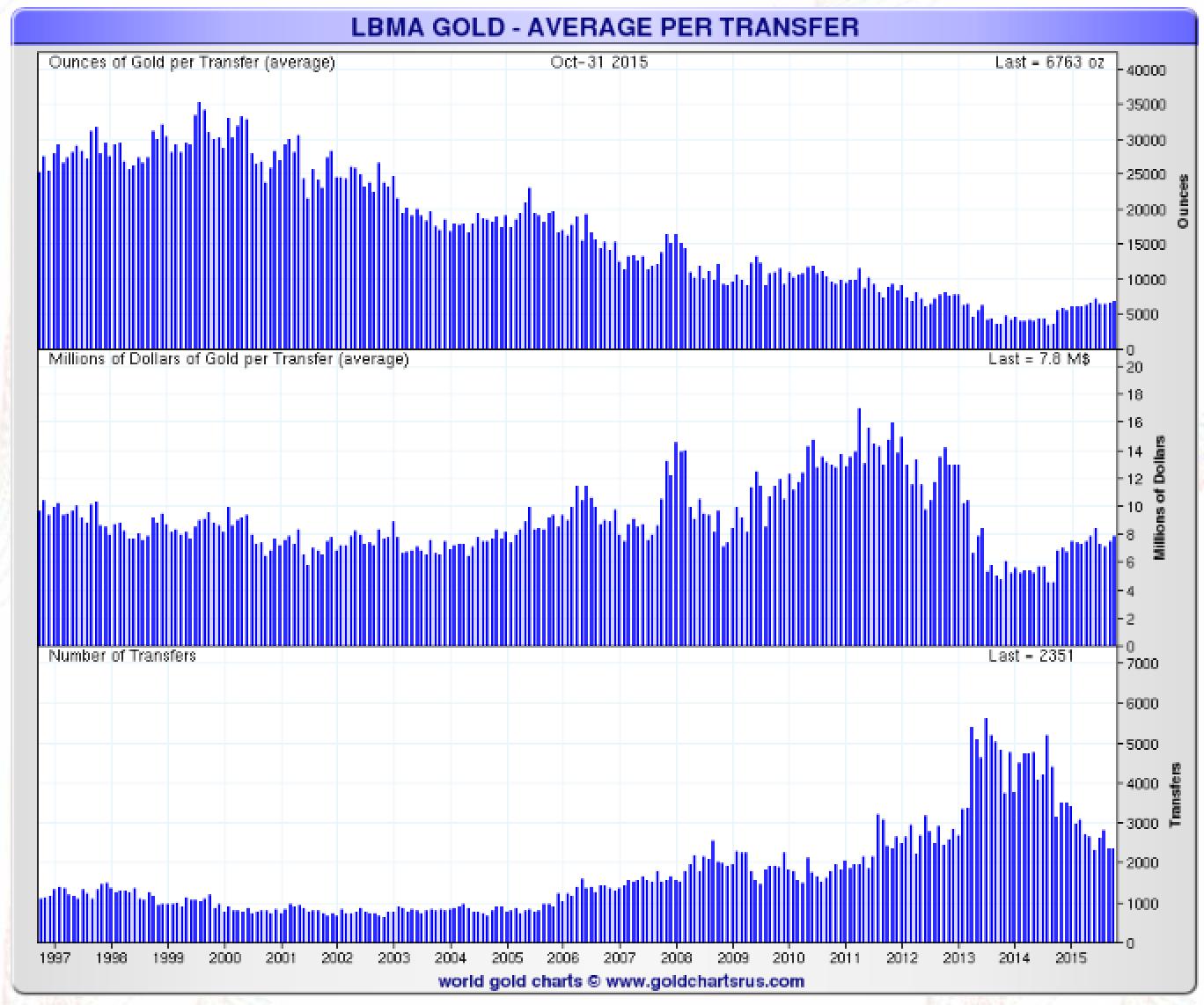 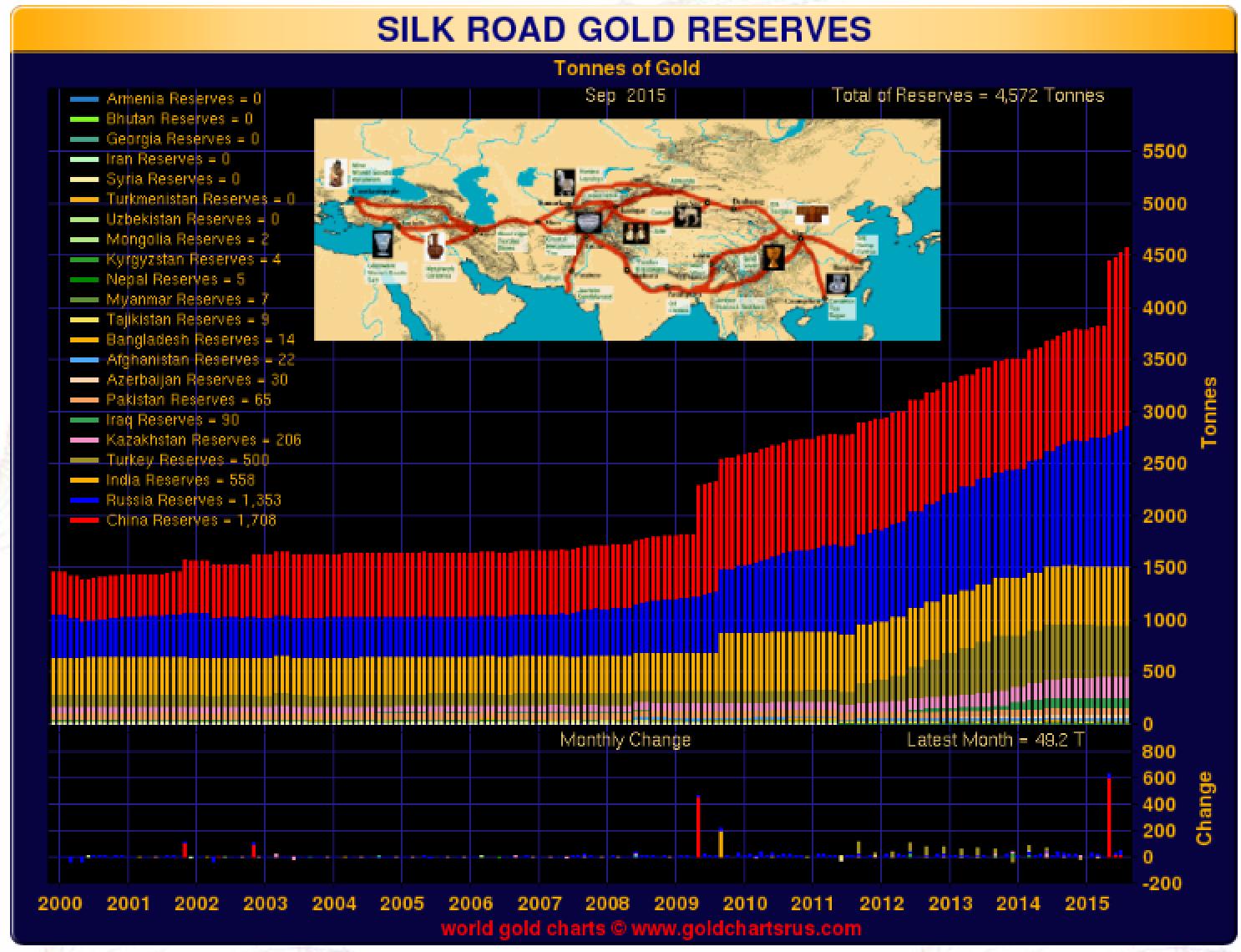 Two countries in particular, Russia and China, made gold an important part of their strategy to eliminate the “exorbitant privilege” the US dollar has in the international monetary system. They have, in a subtle way but even sometimes clearly, indicated that they target the same amount of gold reserves as the U.S. and the EU; the U.S. is presumed to have 8,133.5 tons, EU 11,551.8 tons and the Euro Area 10,788.6 tons. The 8,500 ton number by 2017 was frequently mentioned by Chinese officials. It is just above the U.S. and below the EU. In a different way India is also in the game. India seems to try to use its citizens’ gold to add to reserves by trying to monetize gold in a similar fashion as Turkey. It is estimated that there is between 18,000 to 30,000 tons of gold in private and temple ownership in India. 8,500 tons is about half of the conservative estimate of Indian gold. As for the central bank of Russia, it is buying gold directly from the country’s gold mining companies. 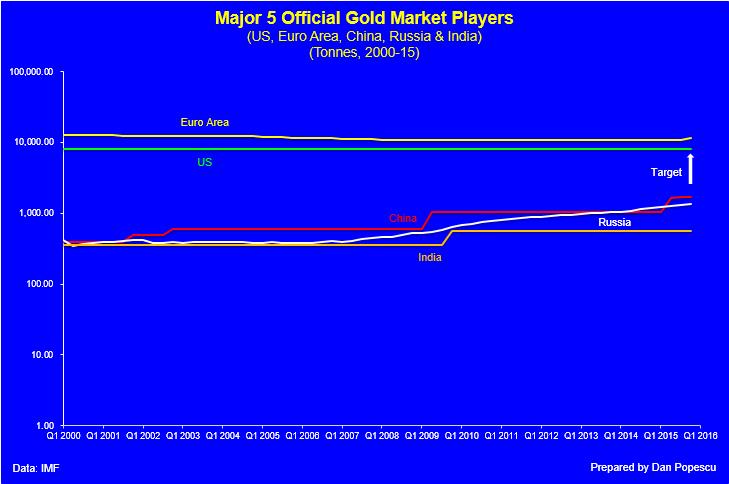 The next chart shows clearly that a major shift in official gold reserves happened after the 2008 crisis. From major sellers of gold, central banks have become major buyers. I wouldn’t be surprised to see central banks’ gold holdings return to the 36,000 ton level of the 1980’s. 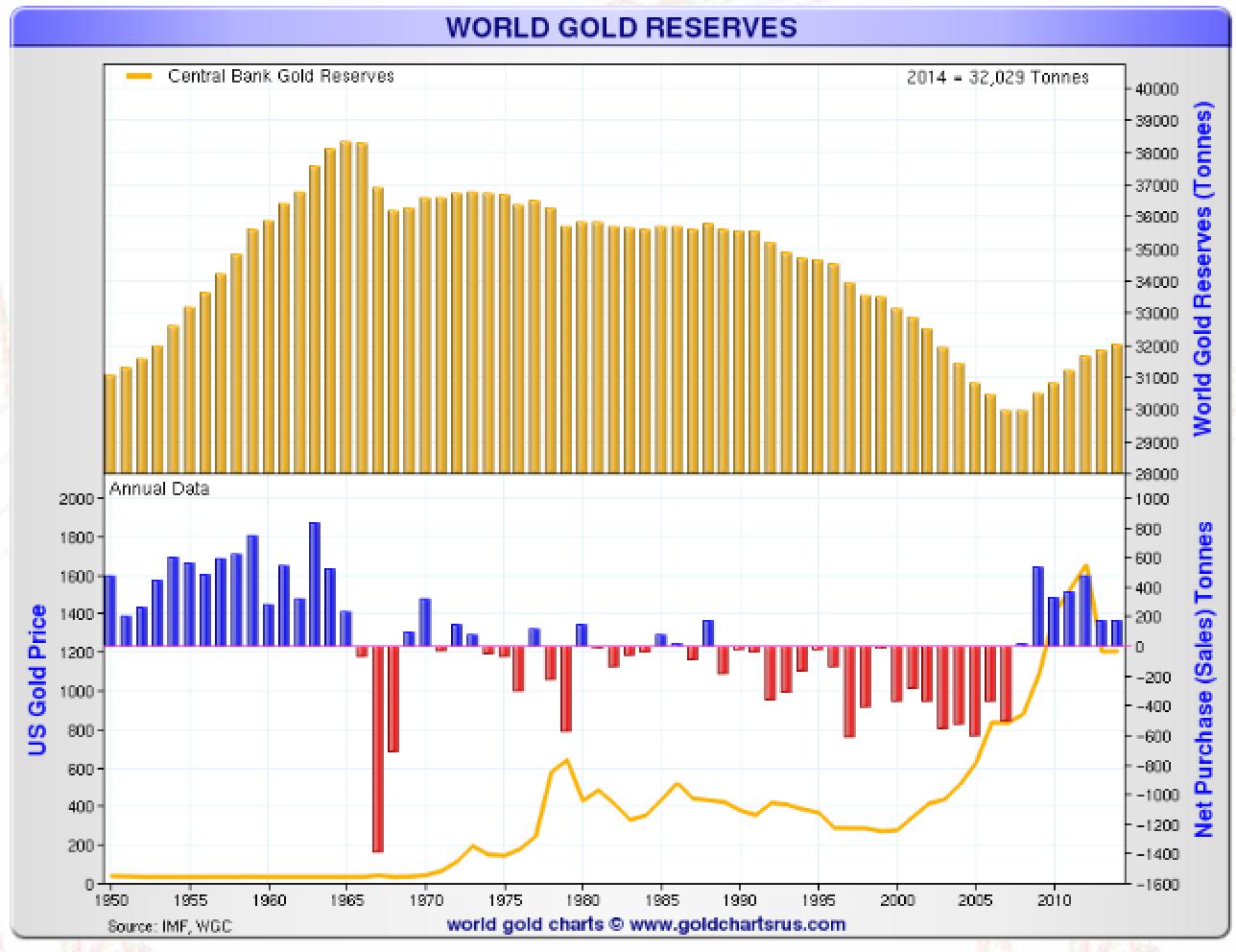 At the same time a central bank trend with respect to gold reserves has developed under intense popular pressure from citizens in the home countries to repatriate gold especially from the U.S. Around 1,400 tons of gold have left the U.S. since 2000. Venezuela and Libya have started the trend and now even EU countries like Germany, Holland and Austria have joined the move under popular pressure at home. 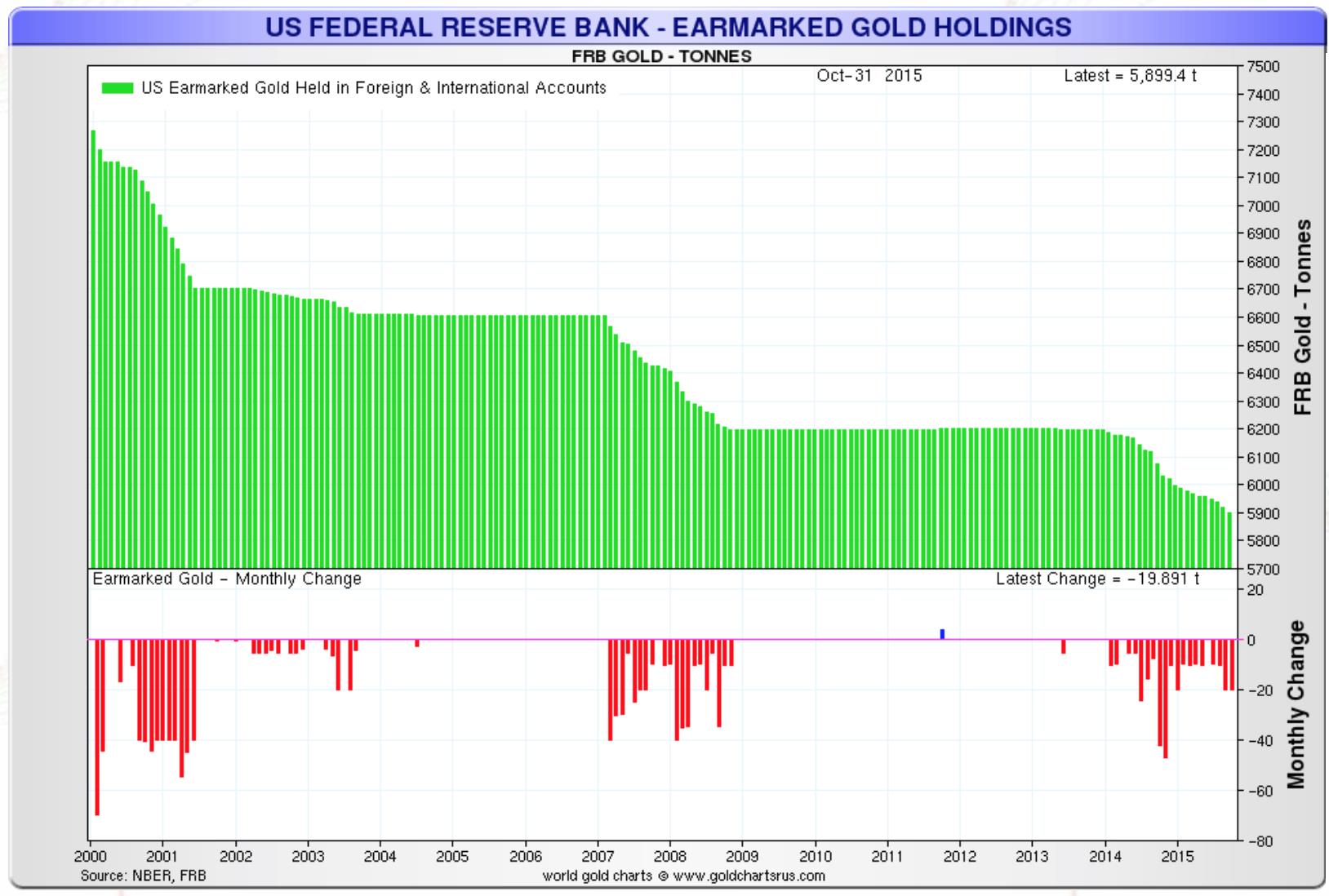 Recent data has also indicated a major increase in gold and silver coin buying worldwide. Those numbers represent neither official buyers nor institutional ones, but rather individual buyers accumulating gold and silver expecting either hyperinflation or state confiscation of cash. 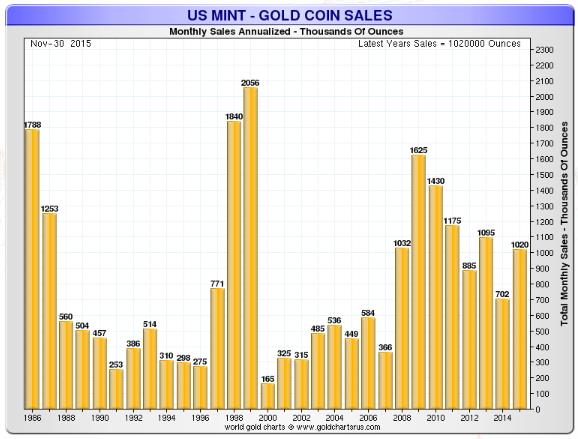 This does not include gold jewelry. Contrary to popular belief, in many countries gold jewelry is bought as a store of value and not as jewelry. Most of the 22- to 24- carat gold can be considered as store of value or, as North Americans call it, pure investment demand. I wrote an article on gold as jewelry versus investment last year. I wrote then that “according to the World Gold Council, “To make a distinction between investment and jewelry demand is to misunderstand Indian attitudes; they are often the same.” This is true not only in India but also in China, the rest of Asia and also in the Middle East.”

If we look at the evolution of gold price only since 2012 as traders do, you would conclude gold is not signaling any problem with the international monetary system. But if you look at the price of gold since the collapse of the gold exchange system in 1973, we get a different picture. Gold has increased in US dollars by 2,928.5%. In 2012 it was up around 5,000%. 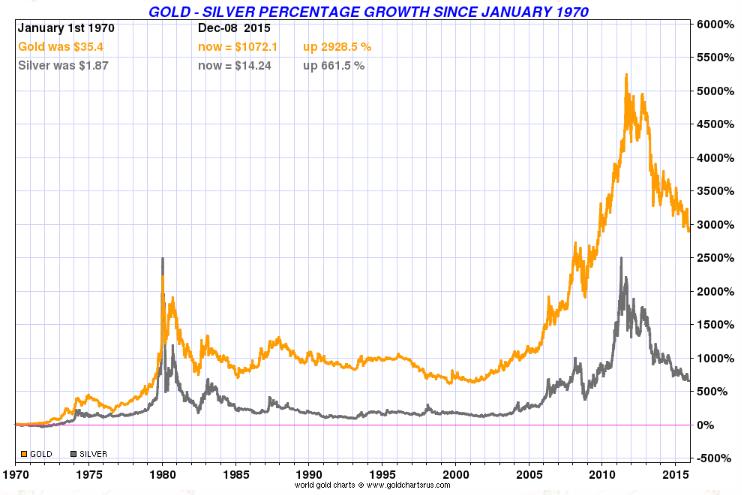 However, this phenomenal percentage growth is not only against the US dollar but against all fiat currencies, as you can observe in the two charts below of gold priced in US dollars versus gold priced in a basket of the twenty largest economies in the world, including the U.S. 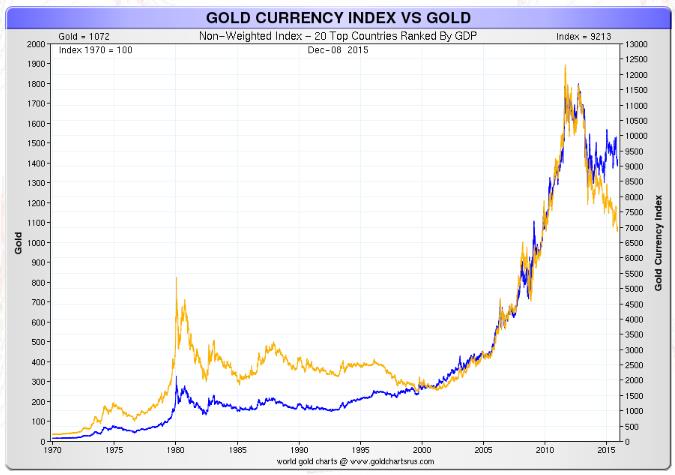 As of 2014 the US dollar has started to diverge from the rest of the fiat currencies. The major 20’s gold price indices have not broken down as the US dollar gold price has. However, I still believe this is just a correction within a larger move up of gold against all fiat currencies. All this gold buying worldwide by central banks and private individuals has reinforced my original hypothesis that this is just a correction within a major bull market, not a correction within a bear market. Worldwide physical gold demand is still going up strongly despite paper price going down. This divergence between the price of gold and physical demand blurs the picture. 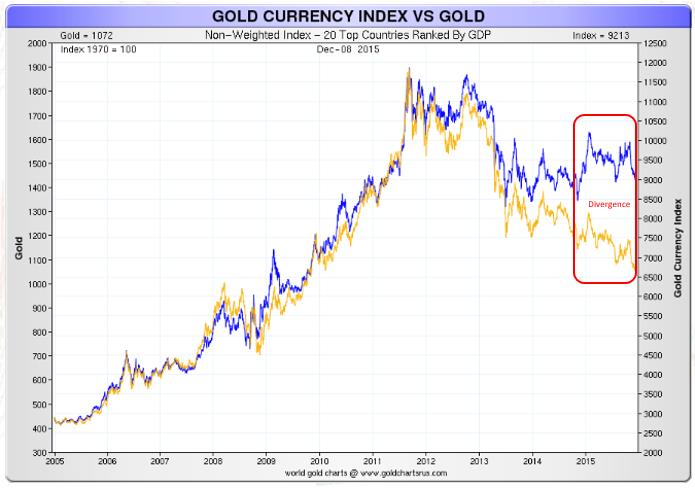 Below is a chart of the price of gold versus U.S. debt. But if you include the rest of the world’s debt you wouldn’t see much difference. As the U.S. and world debt go, so will the price of gold against all fiat currencies. I don’t believe for a moment that U.S. and global debt will join gold down but rather that gold will explode to the upside as it did in the ‘70s. 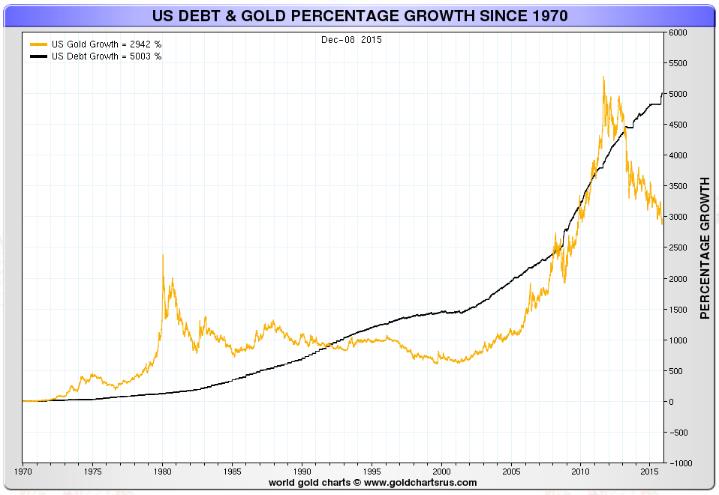 All this gold buying, even though it doesn’t appear in the price, is a clear signal that the international monetary system is in big trouble. Gold has been signaling trouble since the 1960s but world central banks and, more specifically, the U.S. Fed have done everything possible to blur the signal. Still, the signal has been getting louder and louder and impossible to repress any longer.

“Gold is like a canary in the coal mine. It signals problems with respect to currency markets”(1). It doesn’t signal problems just with the US dollar but with the whole international monetary system based on fiat. The collapse and reset of the present monetary system is coming sooner than you think. “Fiat money has no place to go but gold.”(2) Ignore the canary’s signal at your own peril. 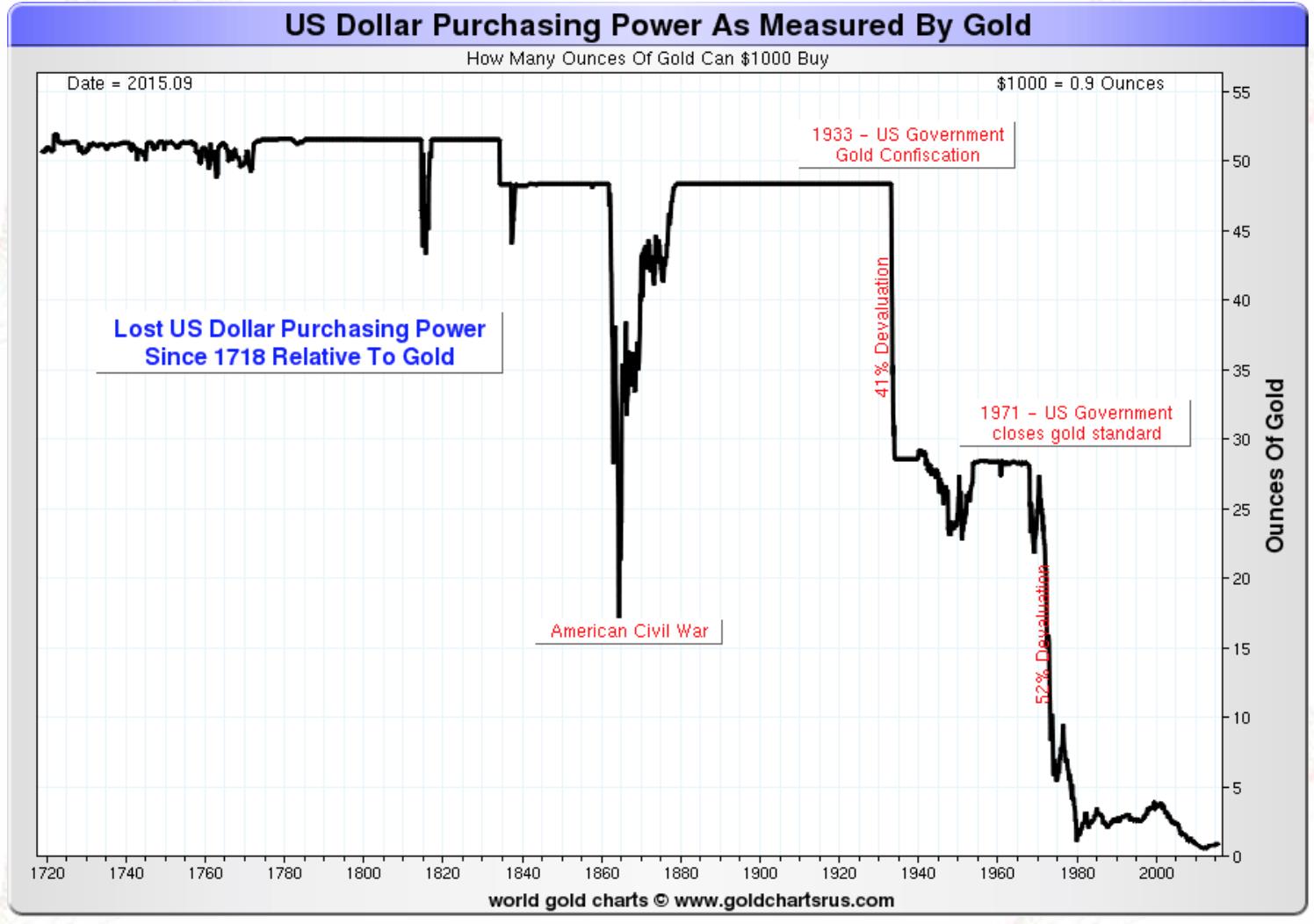