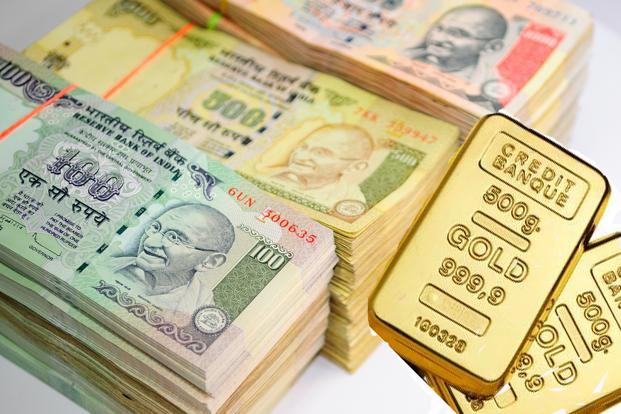 India is now, according to The World Gold Council (WGC), the world’s second biggest consumer of gold having been surpassed by China. However, India remains a major player in the gold market. In this article, I will look at the importance of India in the gold market. In India, gold is religion. India's love affair with gold is timeless, spanning centuries even millennia. Roman historian, Pliny, lamented some 1800 years ago, how India, the sink of precious metals, was draining Rome of gold, an appellation that resonates even today. Indians see the metal as a symbol of purity, prosperity and good fortune. Although estimates vary, India is now thought to hold close to 18,000 tonnes or 10% of the world’s entire above-ground gold stocks. Seven percent of India’s total household savings is currently held in gold.(1) Gold purchase in India is entwined with religious and cultural beliefs. According to the WGC, in the last decade, 75% of gold demand in India has taken the form of jewelry. Also, according to the WGC, “To make a distinction between investment and jewelry demand is to misunderstand Indian attitudes: they are often the same.” (1) More than two-thirds of that demand comes from the country’s rural population. Gold is the second largest import item for India after petroleum. Over 90% of the gold consumed in India is imported. A French visitor to India, Francois Bernier, enviously wrote how “It should not escape notice that gold and silver, after circulating in every other quarter of the globe, come at length to be absorbed in Hindustan.” (1)

The performance of gold in Indian rupees certainly confirms that gold for Indians is an excellent hedge against inflation and devaluation of their fiat currency. Gold has, since 2000, increased close to ten times in rupee terms and, even after the recent drop, it is still seven times higher than its 2000 level. 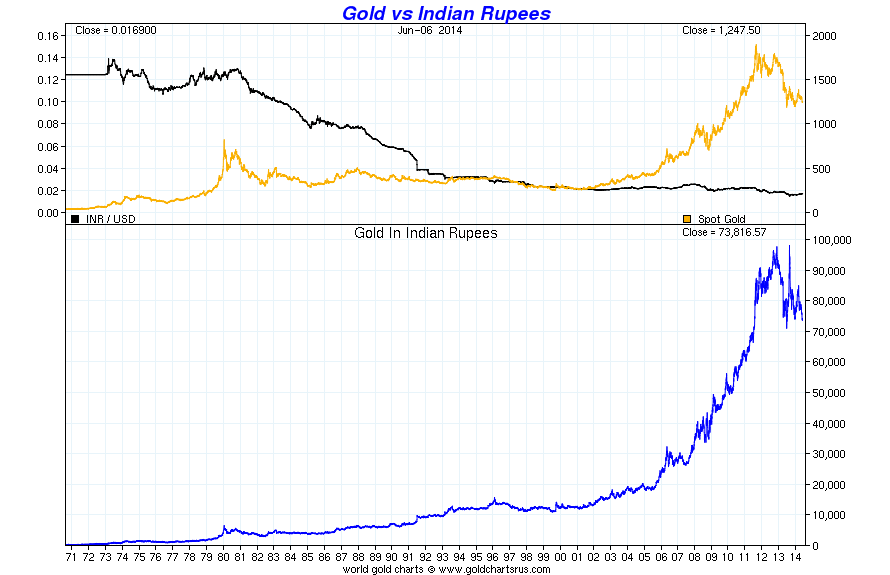 The Reserve Bank of India, in July 2013, had imposed severe restrictions on gold imports in order to check the burgeoning current account deficit and sliding rupee, which led to a decline in official demand for gold of 26% to 190.3 tonnes during the January-March 2014 quarter. However, acts of smuggling precious gold into the country have multiplied alarmingly ever since the government imposed tight restrictions on gold imports, a year ago. There has been a sharp rise in cases of gold smuggling across all airports in the country. Singapore, Sri Lanka and the Middle East countries are the key sources from where gold in huge quantities are smuggled to India by air. Chart #2 of gold premiums in India confirms that the demand for gold has not been curtailed much by the restriction; it only boosted black market demand. India gold premiums have more than doubled since the restrictions were implemented, and they recently halved on hopes of easier import rules. 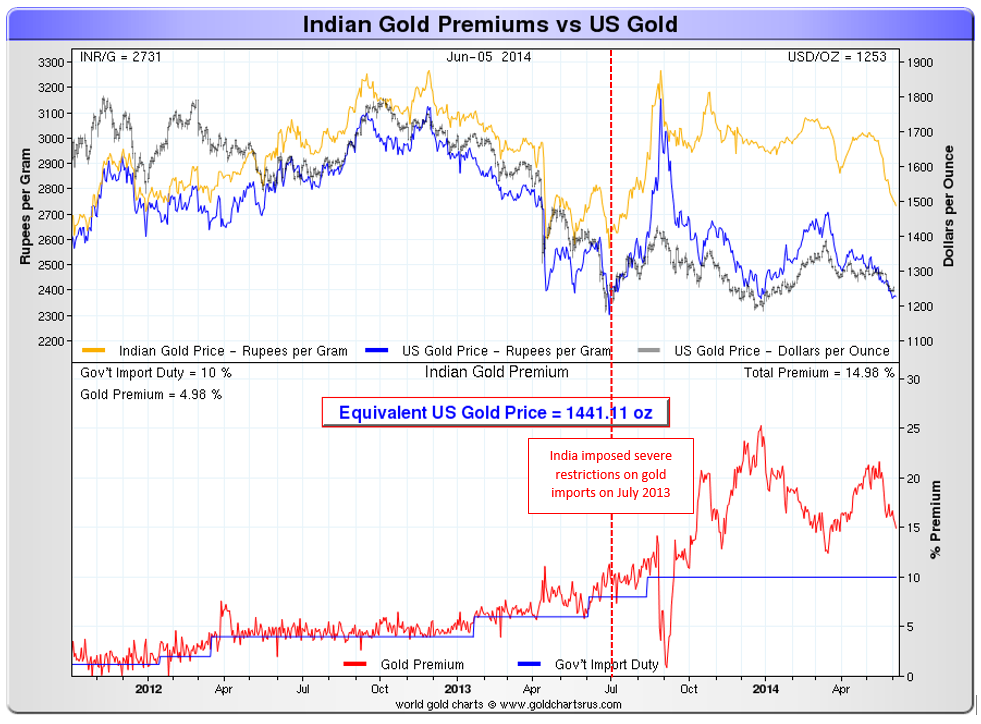 Chart #3 shows that India, last year, was the second largest consumer of gold globally with 23% of total demand (jewelry, bars and coins). India’s gross national savings as a percentage of GDP have increased last year by 9%, already from a very high level, compared with the United States (chart #4). It is estimated that approximately 7% of India’s total household savings are currently held in gold. 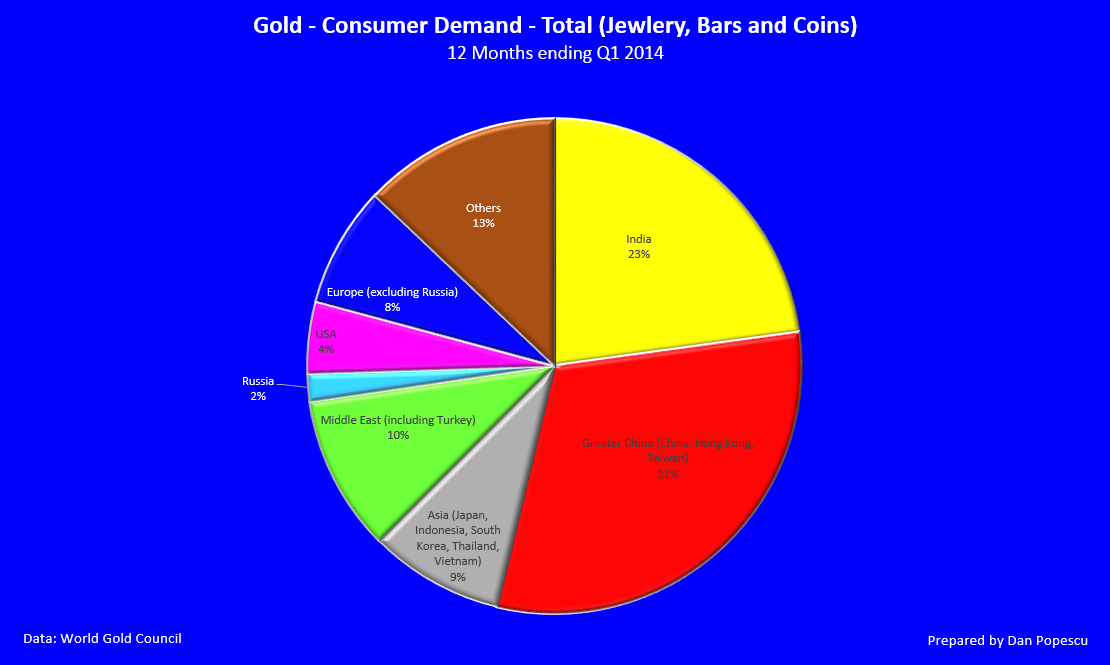 Chart #4: Gross National Savings as a Percentage of GDP 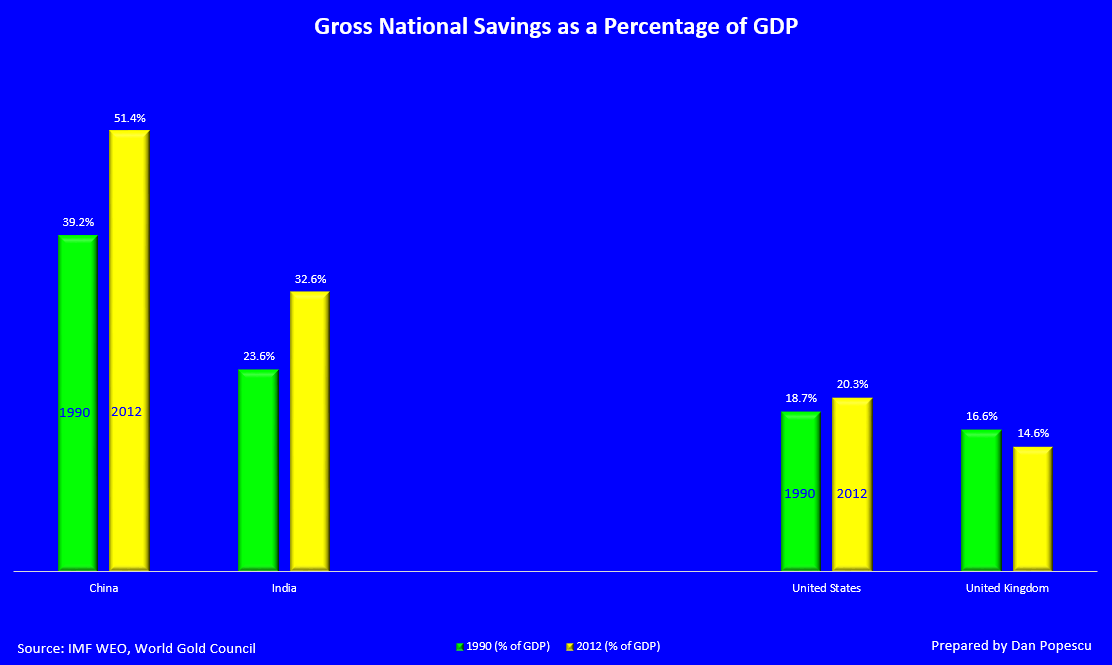 As a percentage, per capita gold consumption in India of 0.8 is close to that of China (excluding Hong Kong) of 0.94 (chart #5). it is interesting to note in the chart is that the United States does not even appear within the first 20 gold consuming countries. 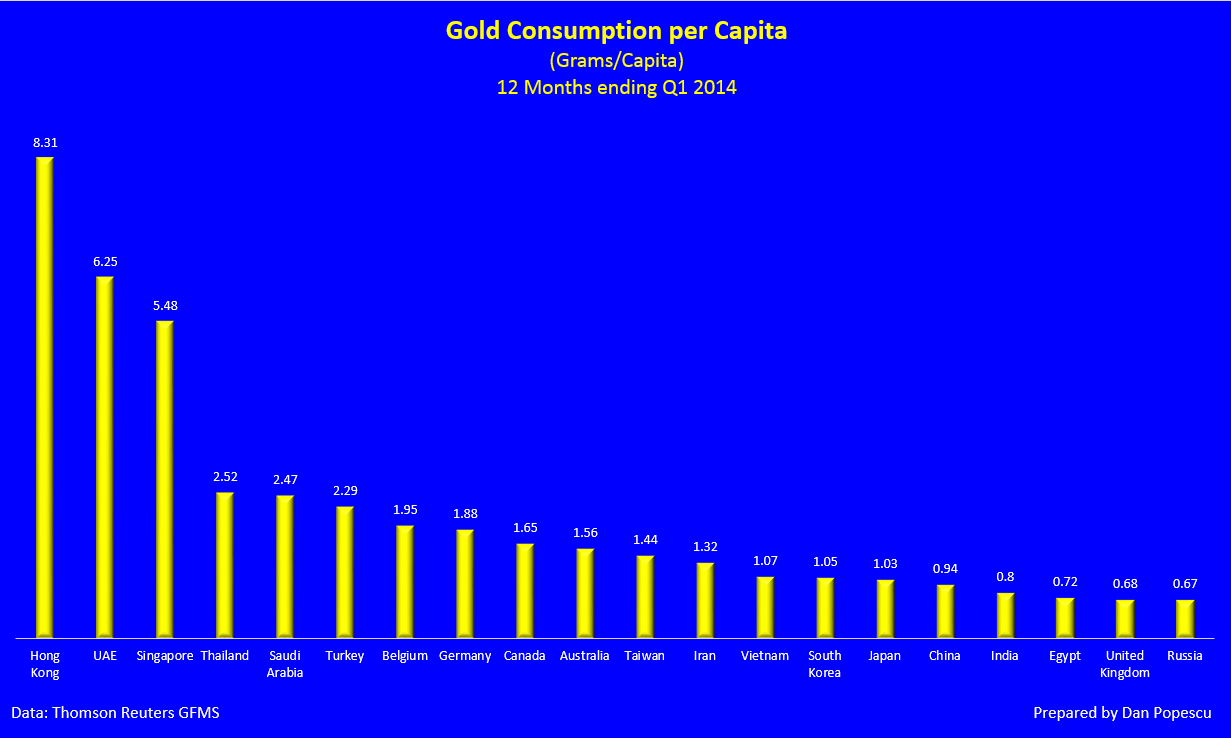 In chart #6, we can see the effect government gold restrictions had on official gold imports. From May 2013 to September 2013, official gold imports dropped more than five times. However, this has to be put in context since, due to the restrictions, some of the official imports were replaced by the black market. The gold premium is a good indicator of this. 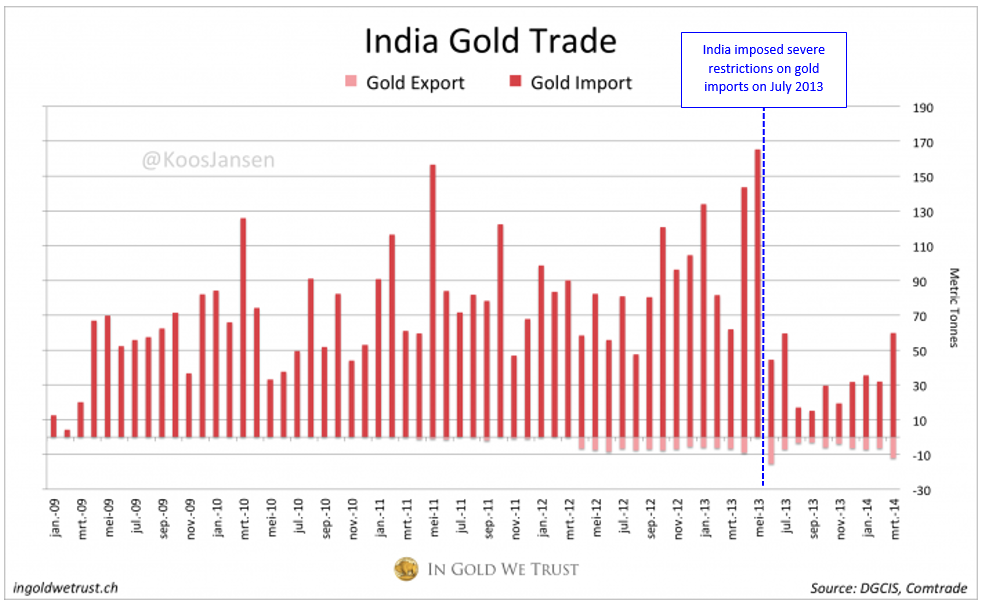 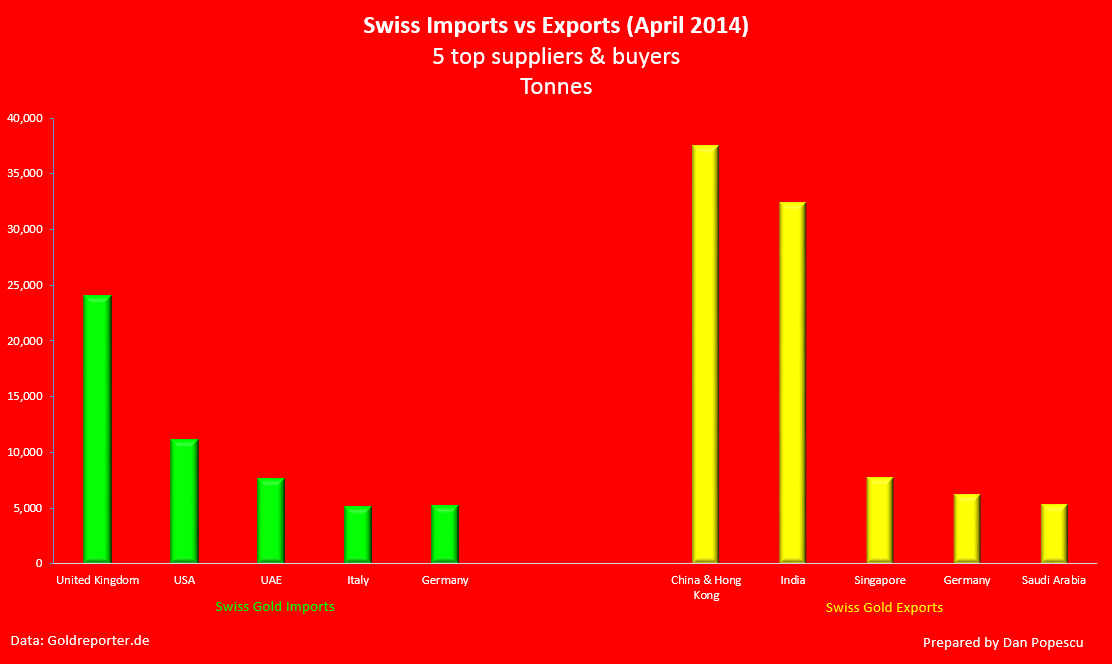 The Reserve Bank of India is required to hold a fixed amount of gold under the Reserve Bank of India Act. The Reserve Bank of India Amendment Act 1956 requires the bank to hold at least Rs.1150 million of its assets in gold in the minimum reserve system. India, the world’s second biggest gold consumer, bought 200 metric tonnes from the International Monetary Fund for $6.7 billion in 2009, as central banks showed increased interest in diversifying their holdings to protect against a slumping US dollar. The purchase took place soon after China and Saudi Arabia announced their increase in gold reserves (chart #11). India, with 557.7 tonnes of gold reserves, is among the largest holder of gold among the emerging countries. Gold represents 7.5% of its total foreign exchange reserves. Official gold reserves as a percentage of GDP are 1.24%. These gold reserves place India in third place (after China and Russia) among emerging countries and in 11th place globally as holder of official gold.

We rarely think of India in the context of the currency wars as a major player but those figures certainly place India as a major possible player in any reset of the international monetary system that will include gold. We should not ignore also the estimate of approximately 18,000 tonnes of gold held by India, with most of it in private hands, that represent about 10% of the world’s entire above-ground gold stocks. Even though the government of India has been trying, unsuccessfully in my opinion, to discourage private gold ownership in recent years, it is not as anti-gold itself as we would be tempted to believe; the large official holdings and the recent purchases confirm it. With a new pro-gold government, India's gold demand is likely to pick up in the second half of the year as curbs on bullion imports are expected to be eased by the country's new government. "The change (in gold policy) is inevitable because Narendra Modi [new Prime Minister] seems to be pro-gold," said Albert Cheng, WGC's head of the Far East region.(8) 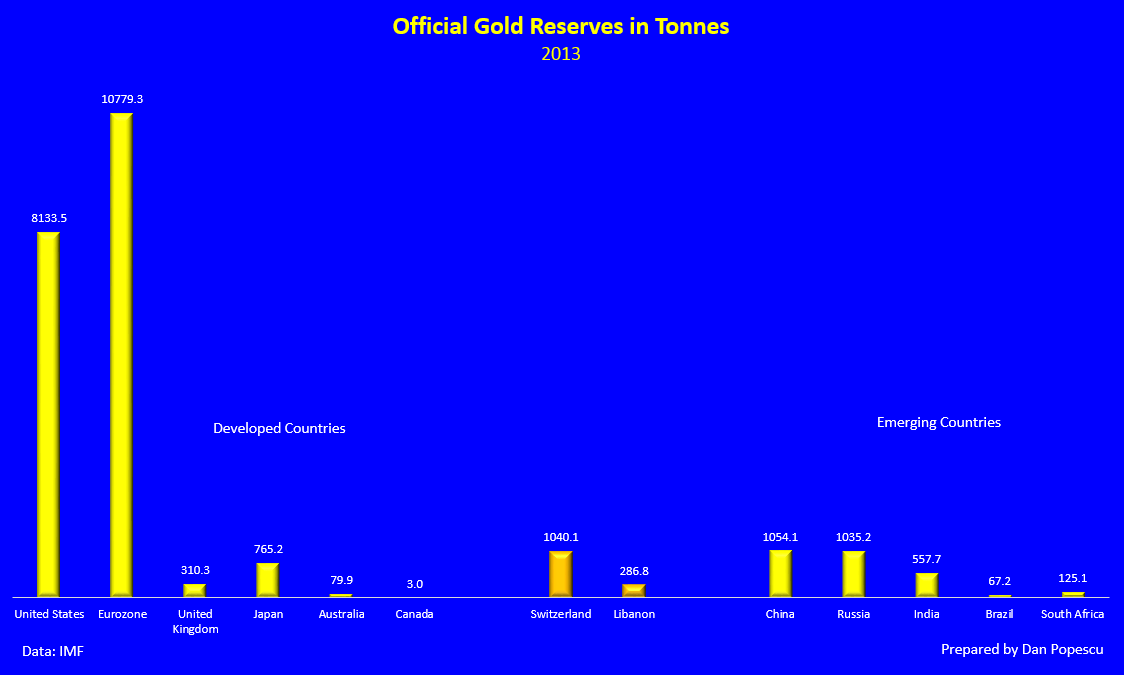 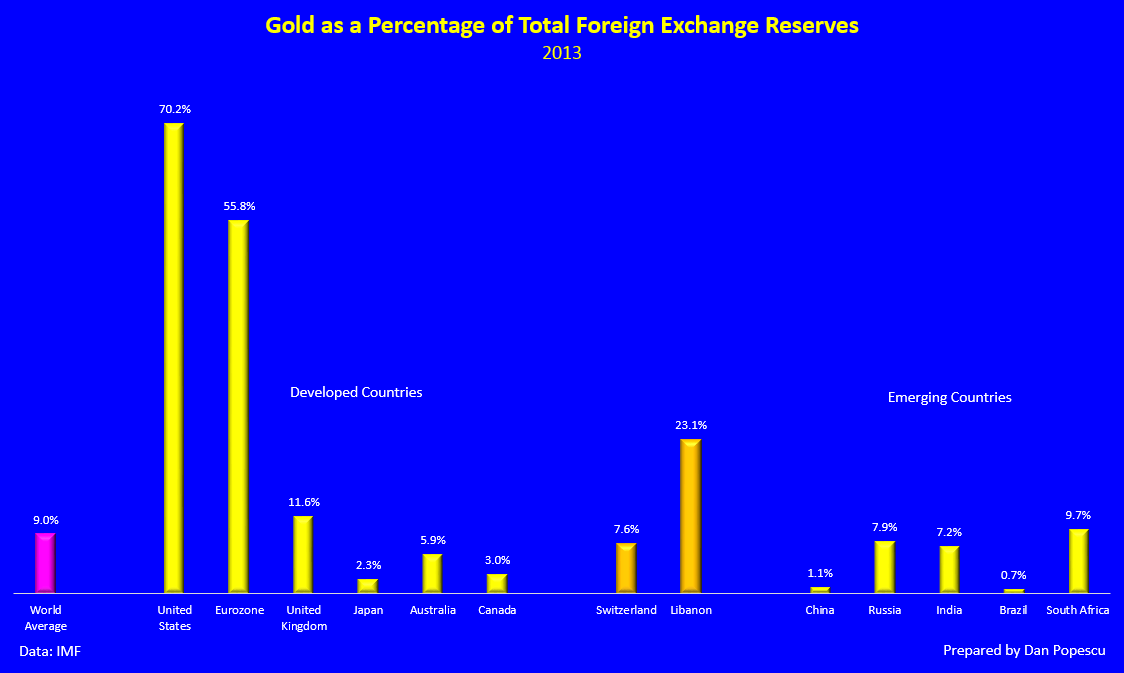 Chart #10: Official Gold Reserves as a Percentage of GDP – Developed vs Emerging Countries 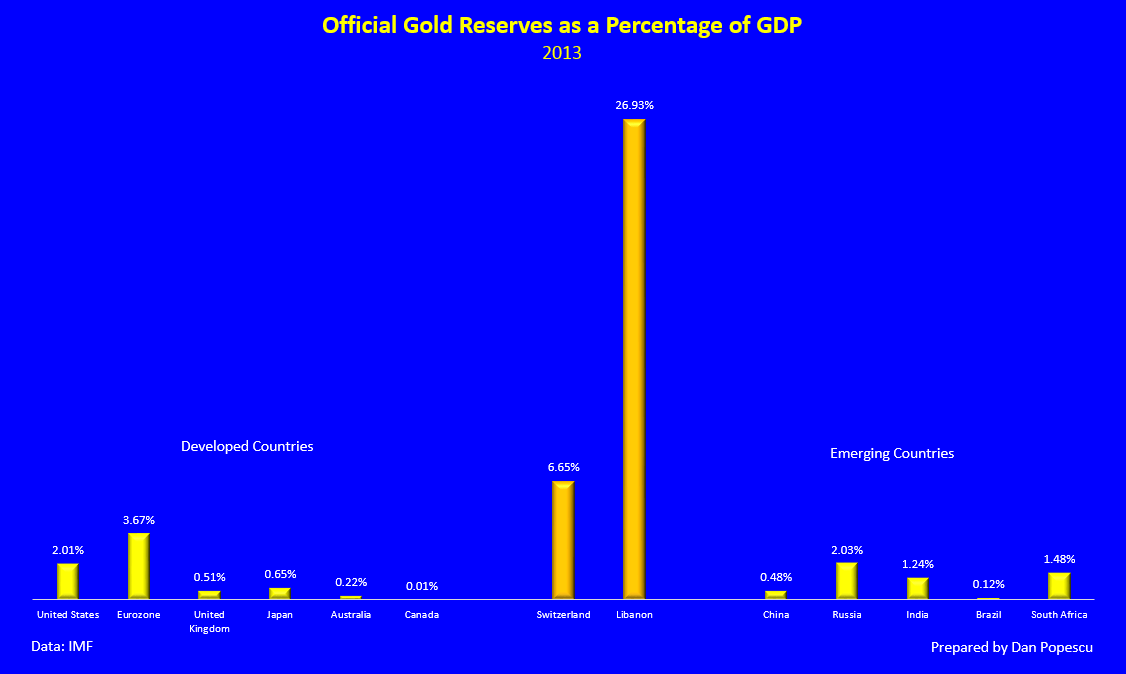 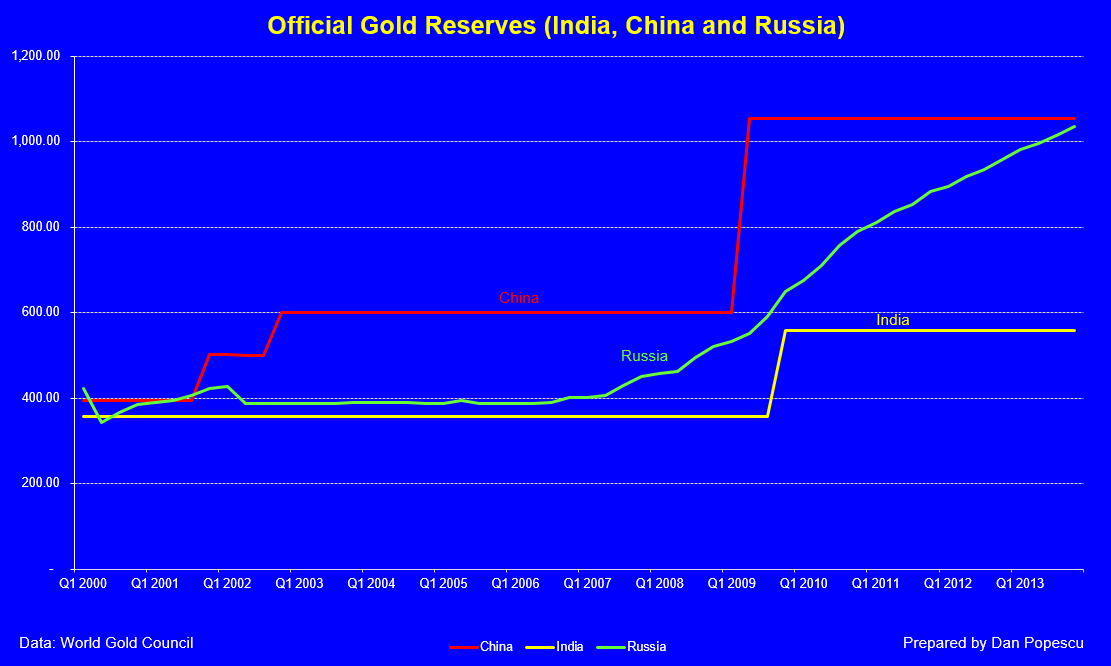 India has also a very long history of using gold and silver as money. The earliest Indian coins were made of silver, and it was not until about 100 A.D. that the Kushan emperor Vima Kadaphises introduced the first Indian gold coin, which was a gold dinar.

The Mohur gold coin was issued by the East India Company in 1836 and was minted by the Calcutta Mint. Today, the Reserve Bank of India does not mint rupee legal tender coins, but several coins are minted like the Akshaya Tritiya gold coin. The India Government Mint operates four mints in the country for the production of coins. Hyderabad, Mumbai and Kolkata mints have gold assaying facilities. The Mumbai Mint has a state-of-the-art gold refining facility up to 999.9, whereas the Hyderabad Mint has an electrolytic silver refining facility up to 999.9.

“For Indians gold is auspicious. It is a sacred metal, an embodiment of divinity that is used to adorn the body and celebrate the householder’s life.” says Dr. Devdutt Pattanaik, mythologist. (1) Gold in India is considered the metal form of Lakshmi, the goddess of wealth. Gold coins are worshipped with flowers and incense during harvest festivals. Buying gold is a popular activity on Akshaya Tritiya, as it is the ultimate symbol of wealth and prosperity. Gold and gold jewelry bought and worn on this day signify never diminishing good fortune. I think India is the only country with a holiday dedicated to gold. 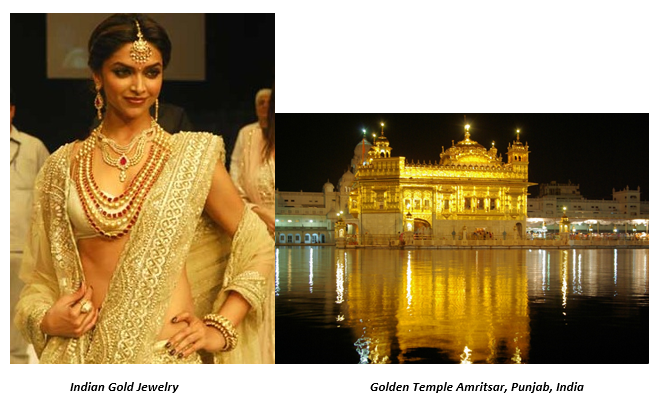 India was the world’s largest importer of gold until China overtook it last year. However, this was not because Indians lost interest in gold. They were prevented from buying as much as they wanted by government restrictions. Julian D.W. Phillips, publisher of the Gold Forecaster, says, “Completely unfettered Indian investors could take off as much as 1,200 tonnes a year at current prices. The ‘graduated’ easing of India’s restrictions on gold imports will, over time, add to the demand and exert upward pressure on the gold price.” (6)

According to Julian D. W. Phillips, “China is not only the main force in the global gold market, but they control the gold market.” (6) India is not, as China is, a price maker, but rather a price taker. However, with such a long pro-gold culture and tradition at the individual and official levels, India’s role in the gold market should not be underestimated. In any reset of the international monetary system, such a large possessor of gold in official and private hands will also play a major, if not a principal, role.