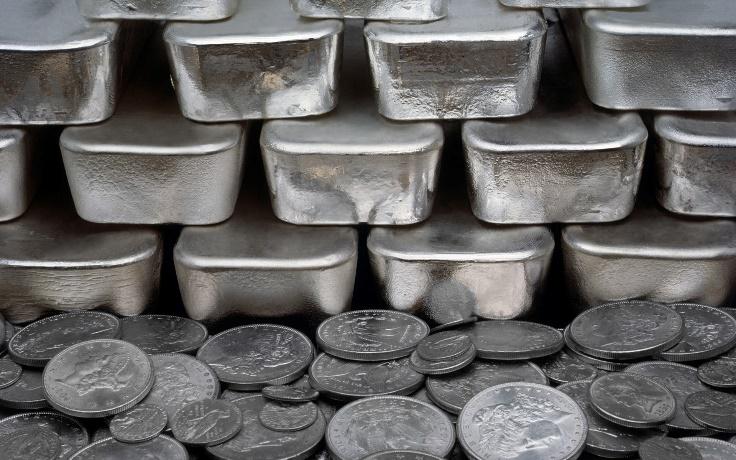 So many articles and books have been written about gold as money, but so few about silver. However, a lot more silver has been used as money than gold, mostly because of its lower value and therefore being easier to transact for day-to-day needs. Throughout history, three metals have dominated the monetary world: gold (electrum), silver (sterling) and copper (bronze). Gold mostly for large transactions, silver for medium transactions, and copper for small transactions.

Any United States dime (10 cents), quarter-dollar, half-dollar or dollar that is dated 1964 or earlier was made of 90% silver. One-dollar coins dated 1971 or earlier were also made of 90% silver and half dollar coins from 1965-1970 were made of 40% silver. In Switzerland until 1967, the 50 centime-, one franc-, two franc- and five franc- coins were silver coins. In French the word for money is “argent”, meaning silver, while in the UK, they still call the British pound Sterling, even though there is no more silver in any of the legal tender British coins.

Silver demand today is approximately 56% industrial versus 10% for gold. However, since the 2008 financial crisis, silver’s industrial demand has decreased 1.24X and gold’s industrial demand decreased by 1.5X. On the other hand, silver’s investment demand has increased 3.4X while gold’s investment demand has doubled since the crisis. Official gold demand increased also from 0% (actually there were sales until 2009) to 11.21% of total gold demand, with no official silver demand. 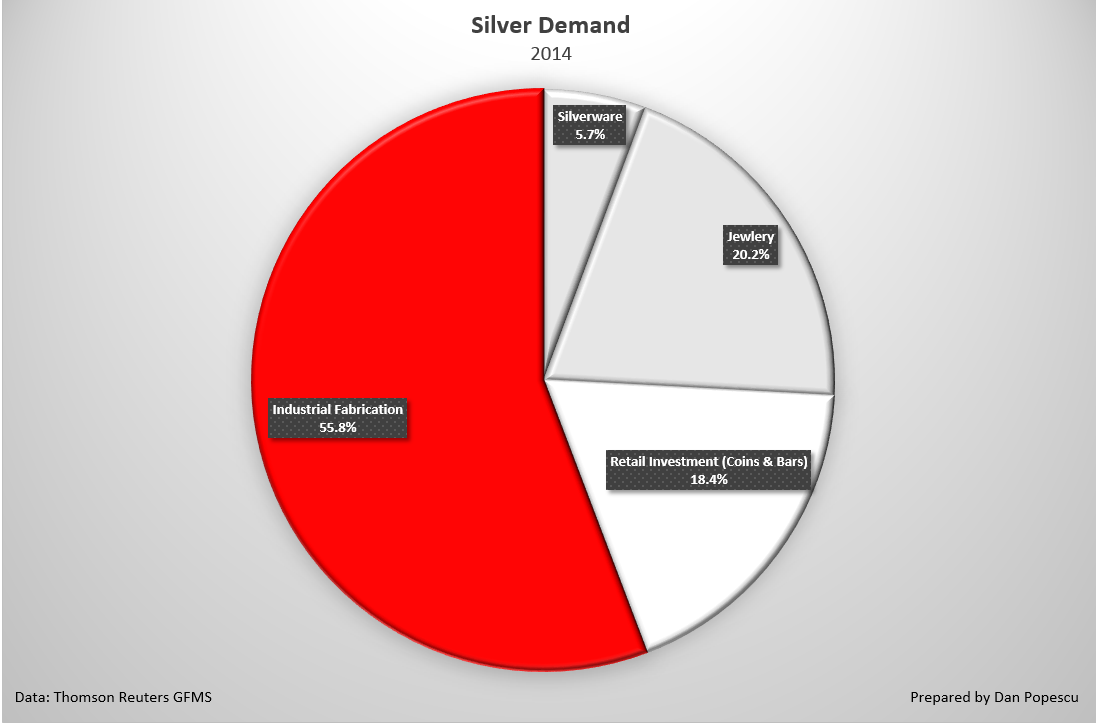 In the chart below, I want you to observe the explosion in silver coin demand (see also annexed charts # 5a and b). It started in 2007, just before the financial crisis, and continued until 2011. Even after 2011 you can see that the demand for coins has not retraced all the uptrend but just fluctuated at the higher level. 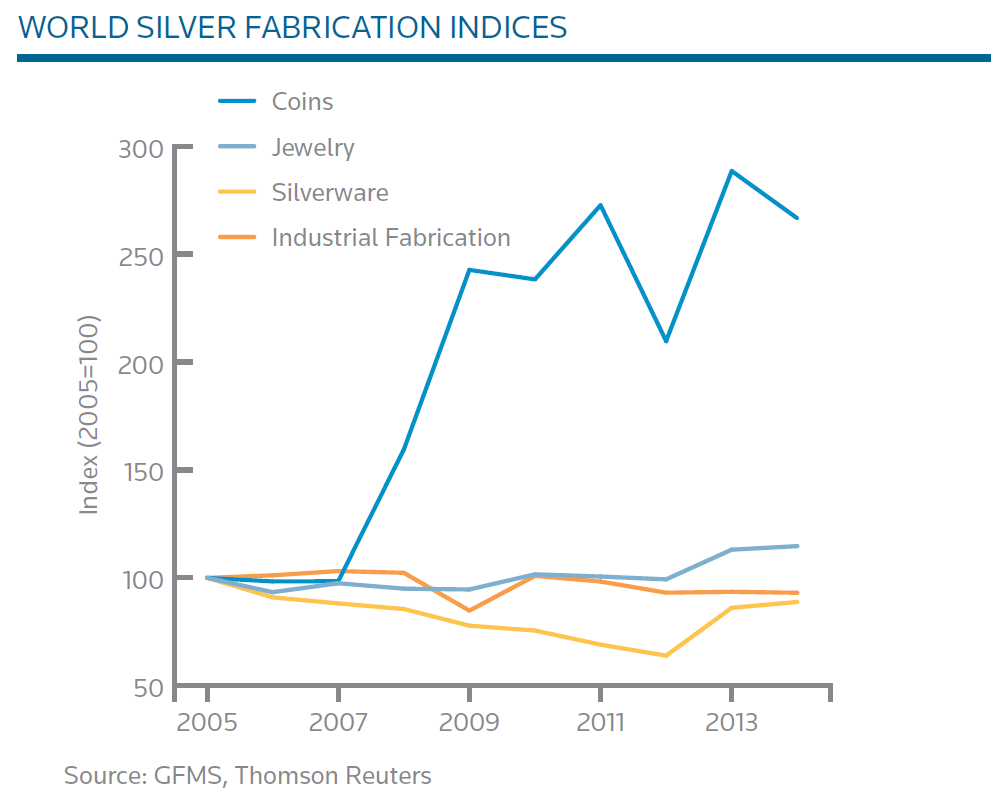 Even today, 150 years after silver has been demonetized and 45 years since silver has disappeared also in any proportion from physical coins, silver still is circulating, even if not in any official manner but only as numismatics and as a store of value. In addition, if you observe in the chart above, silver is still cherished as a store of value. With the help of some pictures, since a picture is worth a thousand words, I want you to see that, through space and time, silver has been and still is coined. The demand has not gone to zero, as some predicted in the ‘90s. Still, today, close to 40% of silver’s demand is as store of value (I do consider jewelry and silverware as store of value). Aristotle defined, more than 2,300 years ago, the characteristics of a good form of money as having these attributes:

1. It must be durable

2. It must be portable

3. It must be divisible

4. It must have intrinsic value

Aristotle also said at the same time, “In effect, there is nothing inherently wrong with fiat money, provided we get perfect authority and god-like intelligence for kings.” The problem with fiat hasn’t changed, and neither have the natural attributes of gold and silver. Still, today, gold and silver possess Aristotle’s characteristics of a good form of money.

No surprise that they have the highest level of marketability and have survived all other forms. After extensive trial and errors through time and space, other things physical and virtual have been tried, but none have survived like gold and silver. President of France, Charles de Gaulle, spoke of “gold whose nature does not alter, which may be formed equally into ingots, bars or coins; which has no nationality and which has, eternally and universally, been regarded as the unalterable currency par excellence.” Change gold with silver and it still applies today as much as it did thousands of years ago, and on a continuous basis. Take the time and look at the pictures below which take you on a trip throughout the world and 2,000 years of history. You cannot not be impressed. 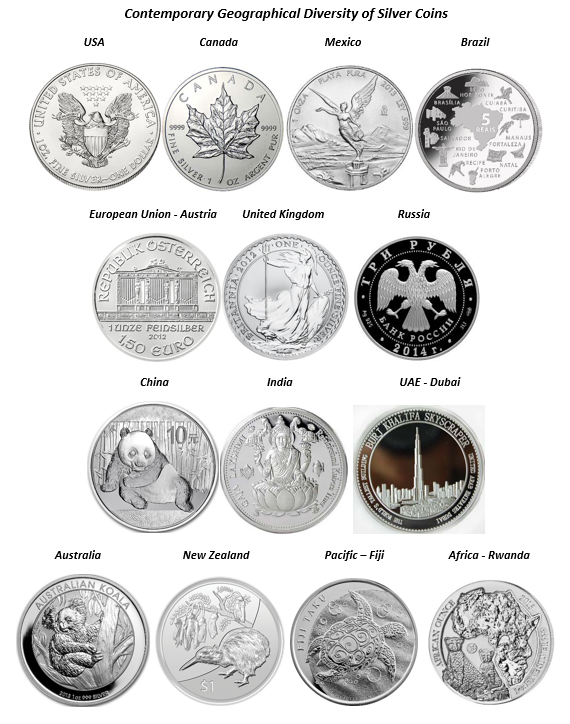 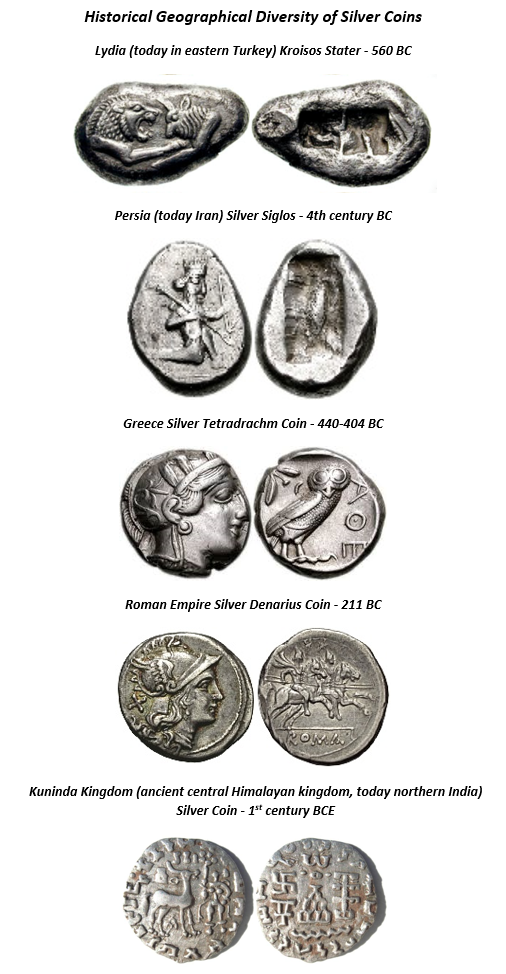 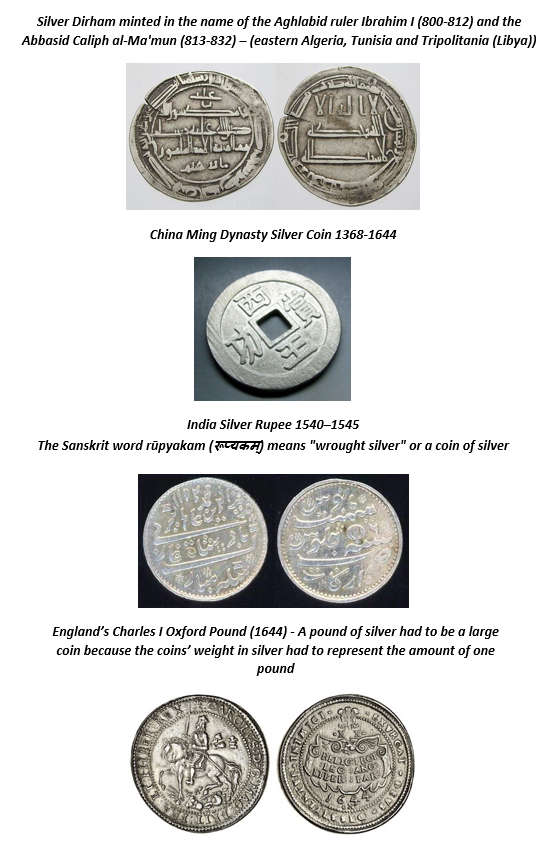 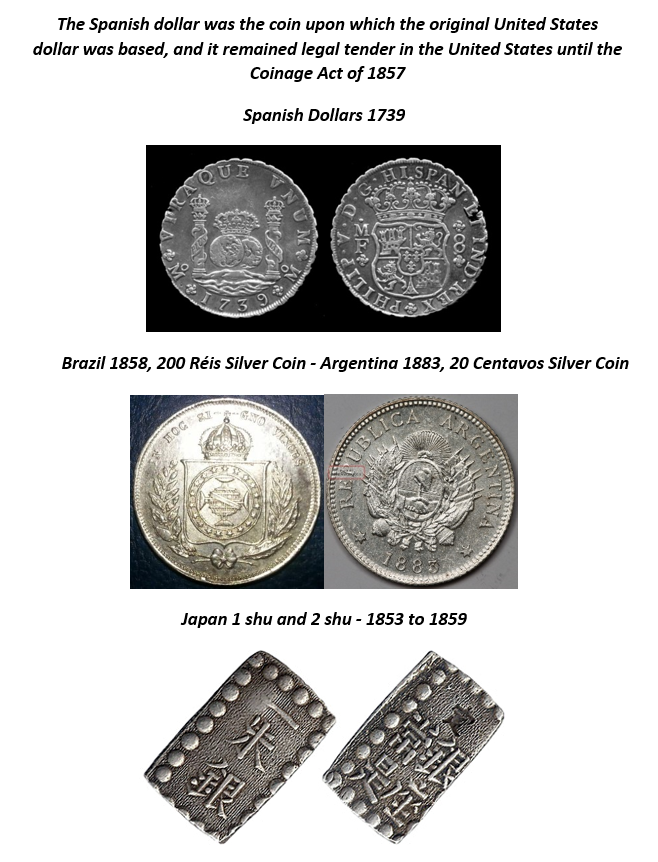 With the help of the diagram below of the US dollar, I want to show you what a dollar certificate represented and what has happened to money since the introduction of paper certificates, and then, since the ‘80s, the introduction of virtual money. You can apply it to any other paper currency of the world and it will work as well. As you can see, the original certificates that represented something real (silver) and, by simple modifications of words, those certificates became worthless, having only trust in maintaining some value and that, thanks to the coercion of the state. The same thing happened with the first paper certificates, created in1023 in China, that Marco Polo brought back to Europe. 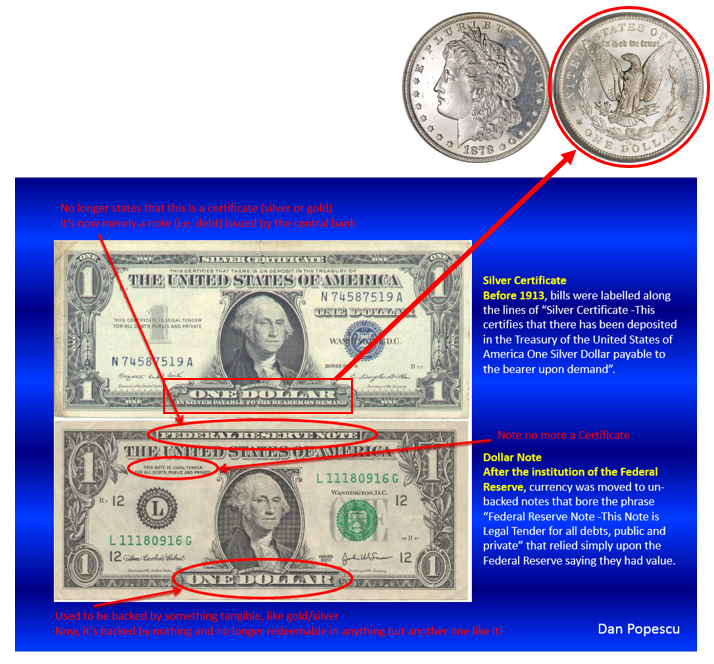 I think it is a great mistake to dismiss gold, but also silver, as money. Even if they both have been out of circulation for a long time, they both remain in the background of the monetary system as “real” money “in extremis”: gold as part of the official foreign exchange reserves, and silver as “poor man’s gold”. During both financial crises of the ‘70s and of 2008, both gold and silver have spiked on monetary demand (see chart #6).

Sandip Jaitly, de Fekete Research, in an excellent article on bimetallism, The Validity of Bimetallism, argues that the problem of bimetallism comes with the attempt to fix prices. He further states, “The problem was not with bimetallism but with the mechanics of its establishment. Bimetallism is paradise so long as exchanges between the metal are free, and mints are open to unlimited tender in both metals.” An excellent example of silver’s value as money is the recent events in India, when the government imposed restrictions on the importation of gold. Yes, the black market in gold exploded, but also there was immediately a large increase of silver buying. Do not dismiss history with such ridiculous statements as “relic of the past” or “useless metal”. Every scientific invention or innovation has as its inspiration observations and knowledge of the past. There is a good reason why gold and silver have survived while every fiat currency has passed away after a very short passage.

We hear more and more, and that is all over the world, of banning cash and regulating crypto-currencies. It would be easy for the state to do it, but I expect the demand for gold bars from one gram to one kilogram to explode if that happens. We already see one gram gold and silver bars starting to circulate and gaining in popularity. 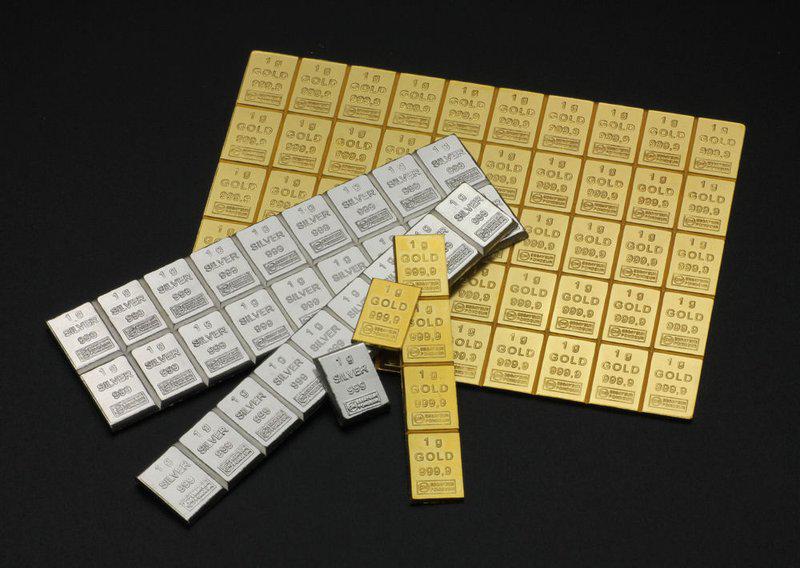 While gold is usually only money, silver today, on the other hand, acts more as a commodity in good economic and geopolitical times; but as soon as there are signs of a crisis, it becomes money and starts acting as poor man’s gold. Both gold and silver have remained and still remain money, even if only in extremis, no question in my mind. However, both gold and silver have not been circulating much in the last 50 years. They have been mostly a store of value. Governments have coerced people by decree to use fiat currency only. Soon it seems even paper fiat will be banned and only electronic fiat will be allowed.

I would like to conclude with Julian D. W. Phillips who, in a recent issue of the Silver Forecaster, says it best about silver: “The silver price has moved with gold for several years now and we believe it will continue to do so. However, silver has led the way on this breakout, so we ask again, is this because of the excellent fundamentals? We think not, as it has moved and will be moving as a monetary metal, despite it having no monetary role. With the health of the monetary system slowly decaying over the years, savvy investors are protecting themselves. Many will question this conclusion because it is so long since silver was recognized as money. We would answer by saying that it is more a turning away from fiat currencies to items that have always been recognized as measures of value over man’s existence. It is only since 1973 that the world decided to reject precious metals as money.” (see chart # 6) 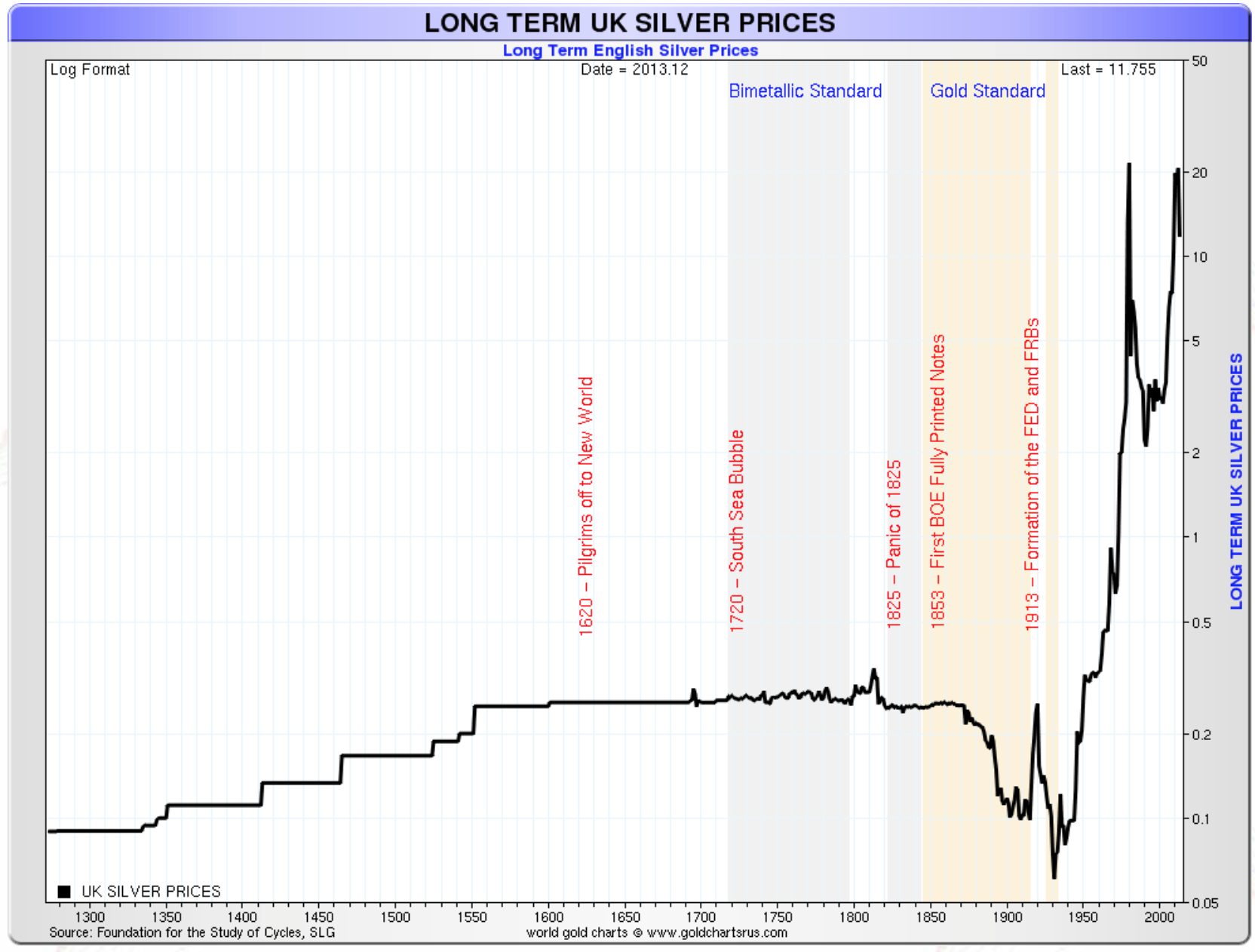 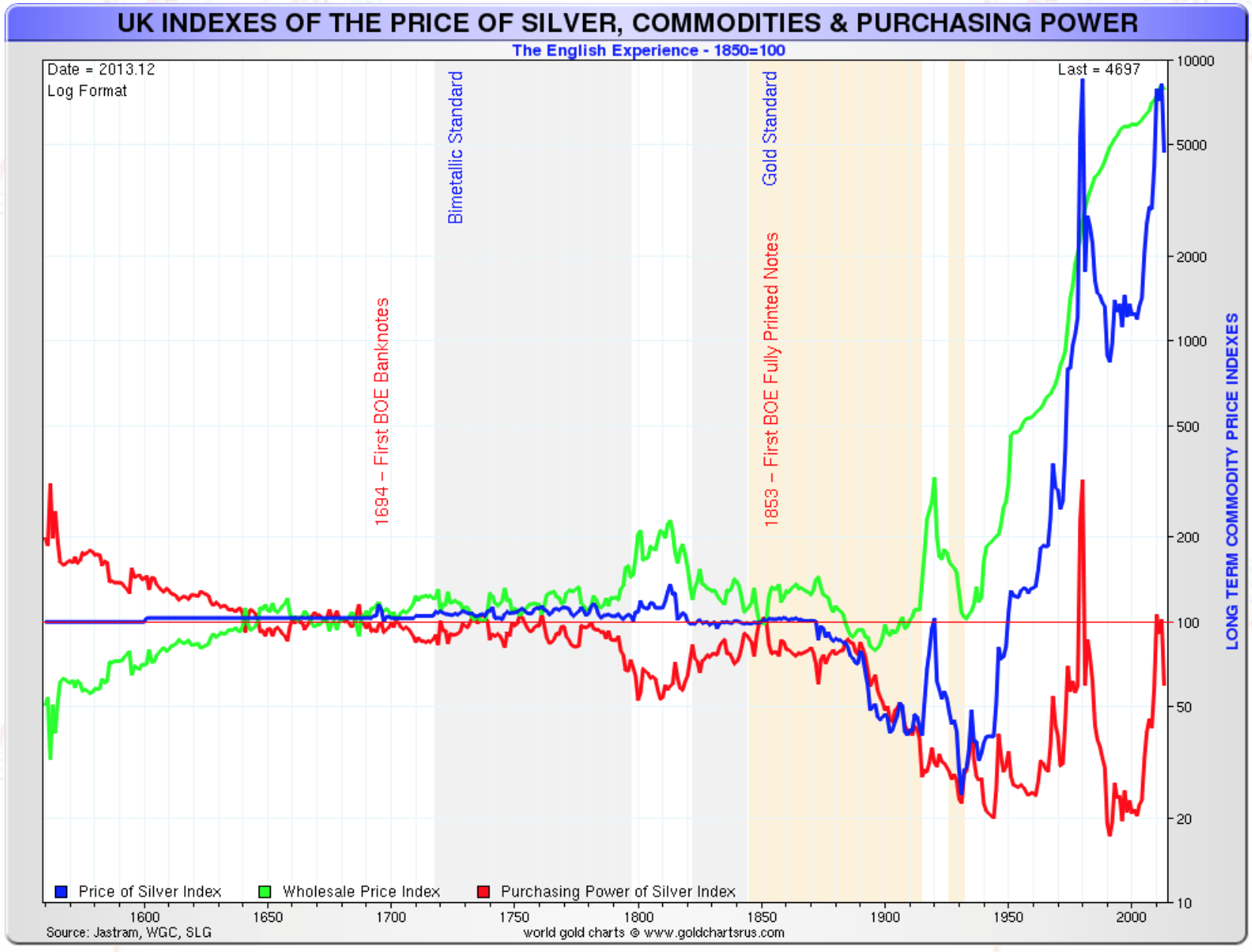 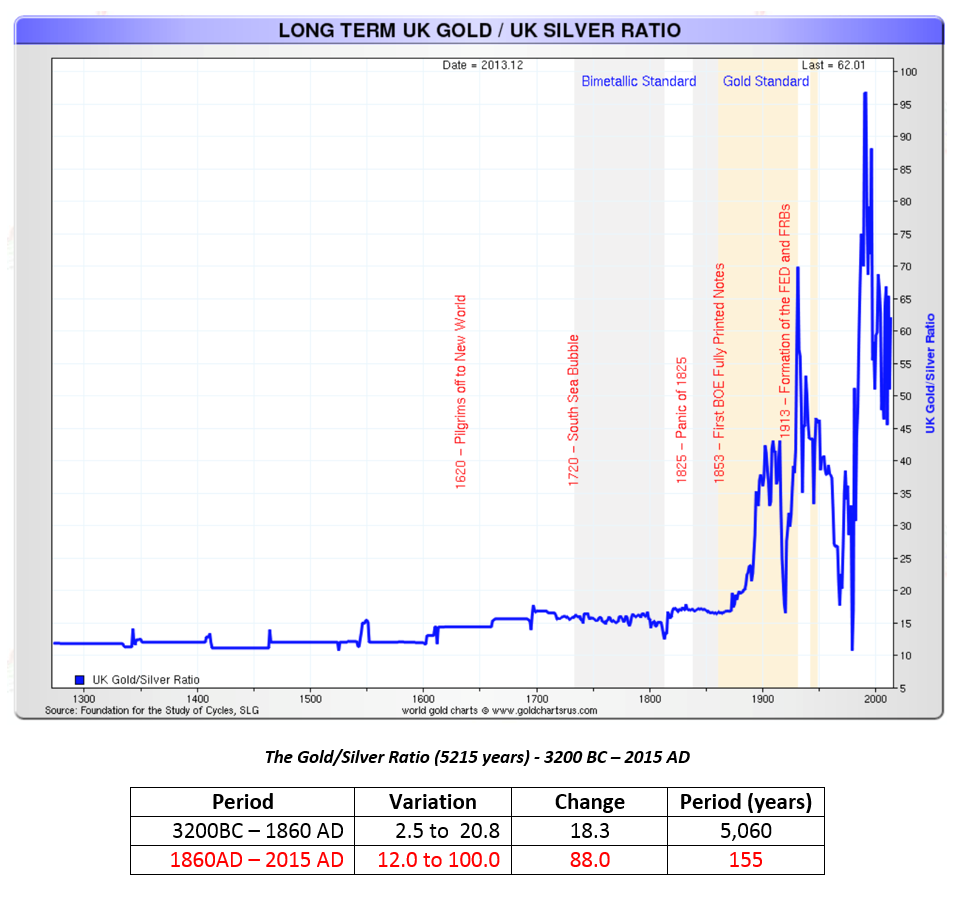 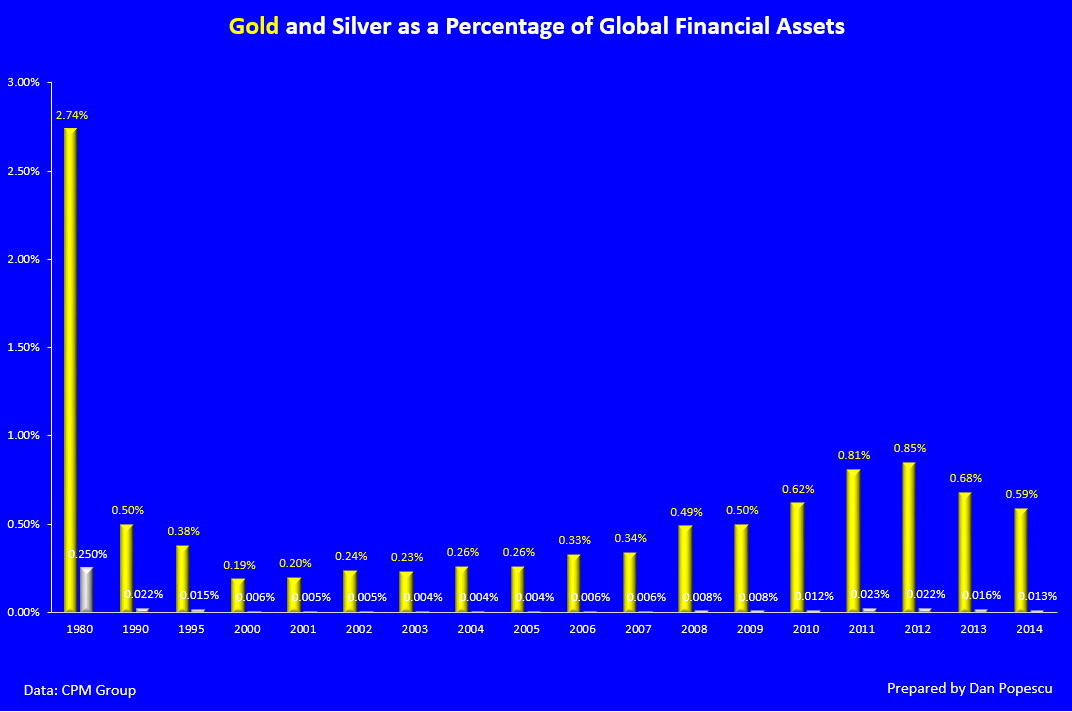 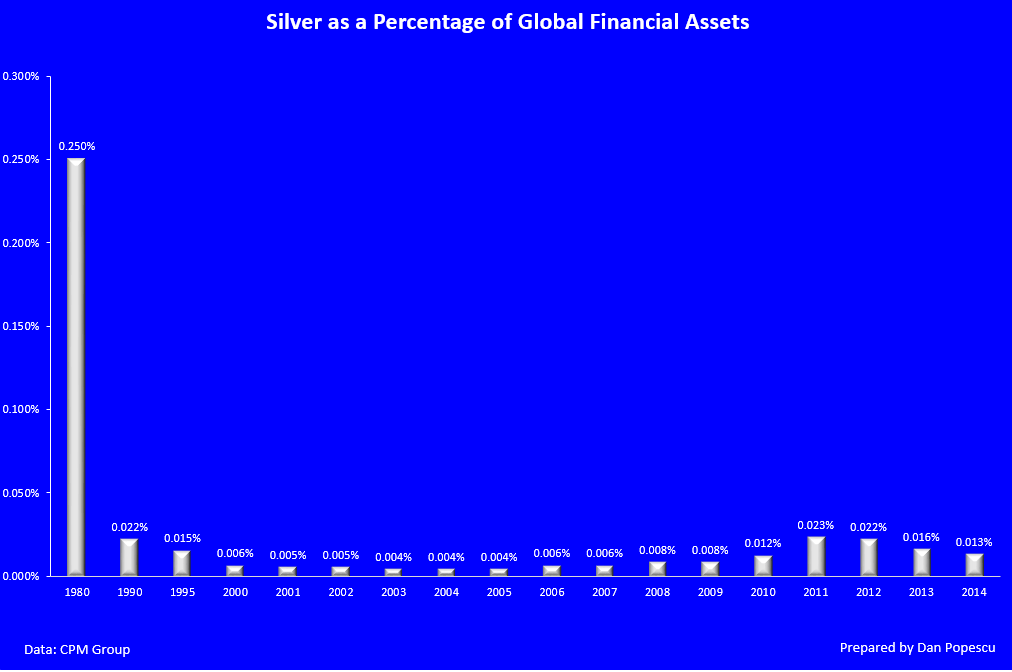 Chart #5a: US Mint Coin Sales – Gold vs Silver (Ounces) 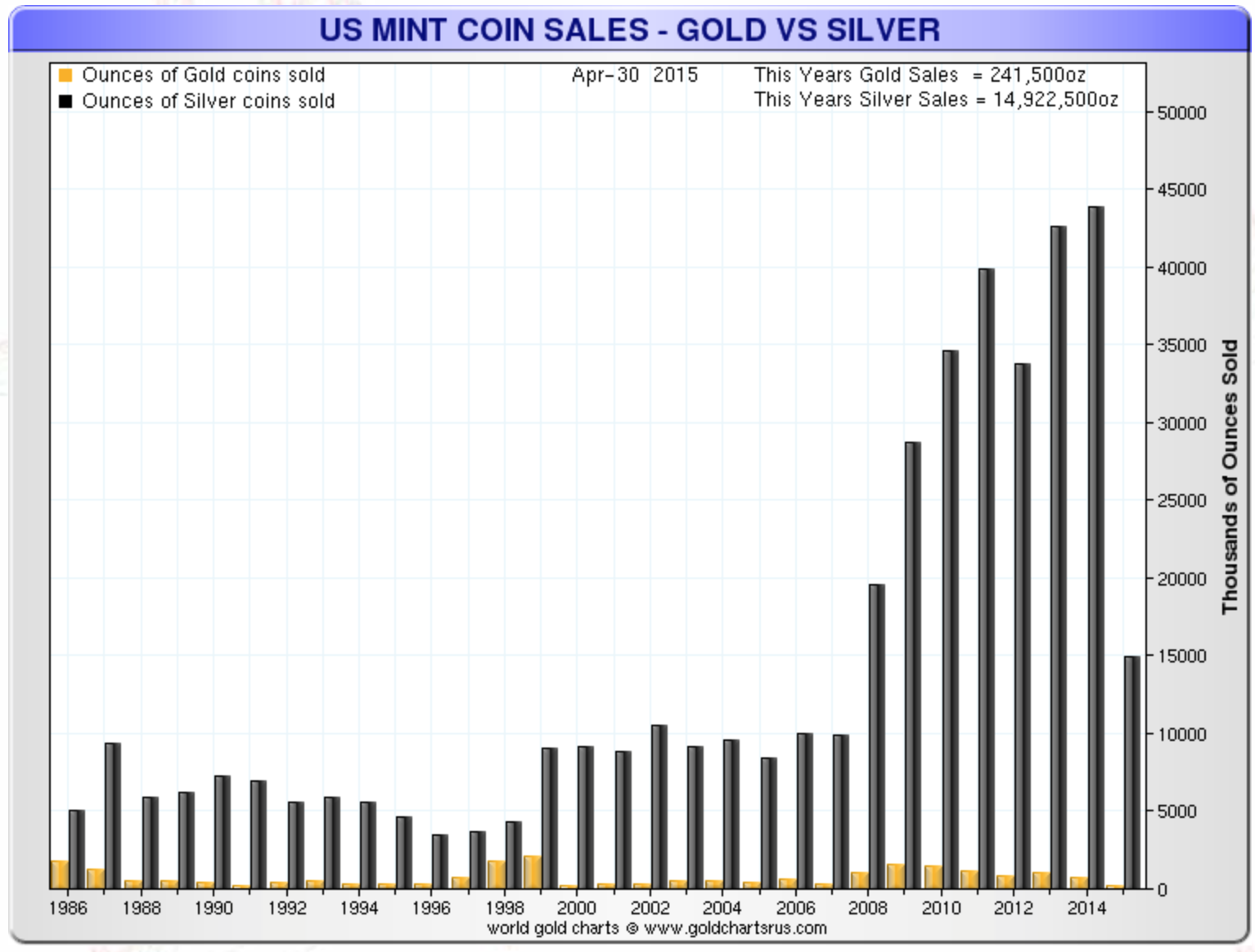 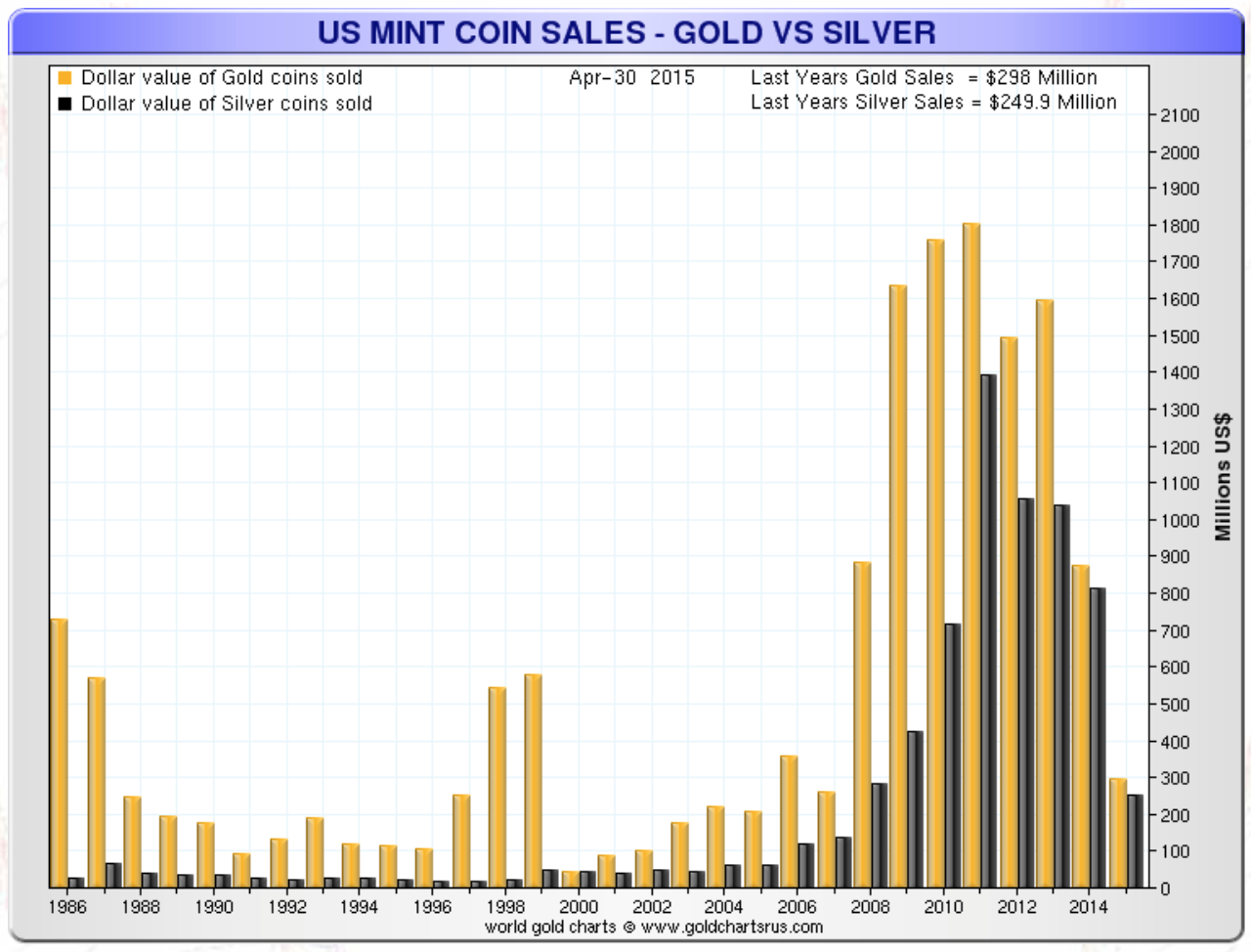 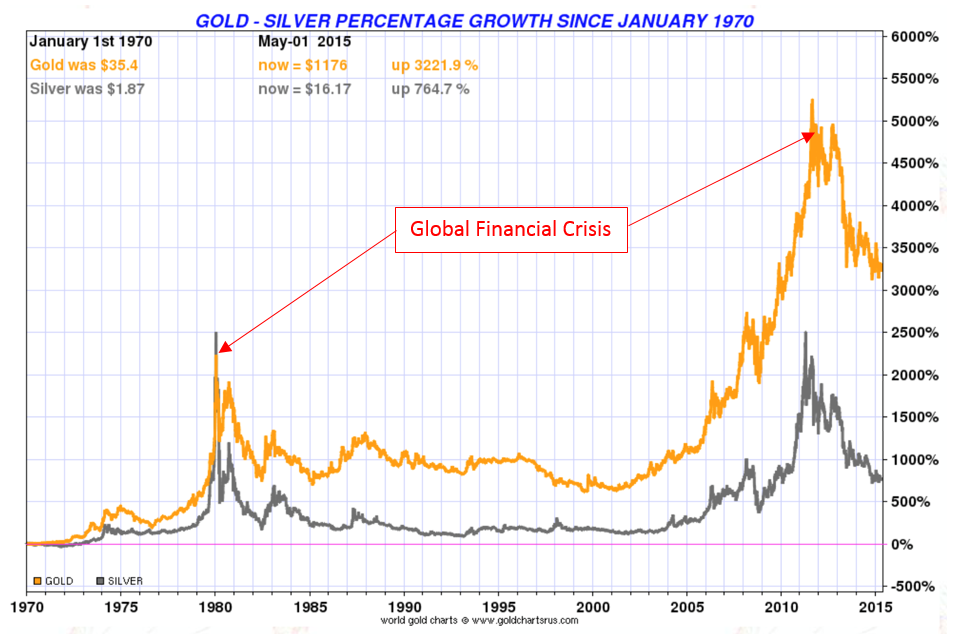 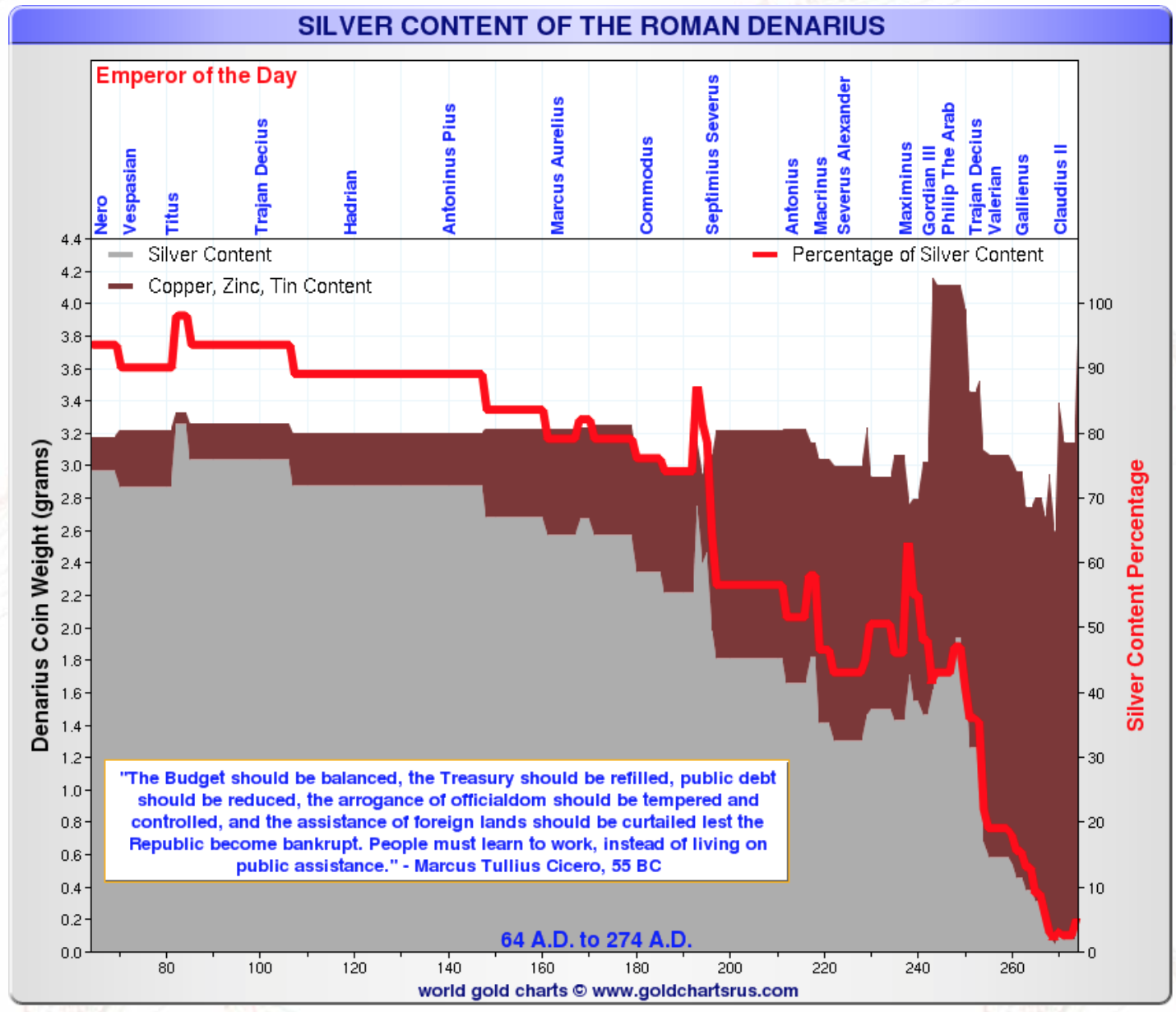