In monthly, silver made a pull-back on the 50-month Moving Average, which blocked the rise from 2016 to July 2019.

And then silver came back above the horizontal level of $ 17.

The end of the year should see prices rise sharply. 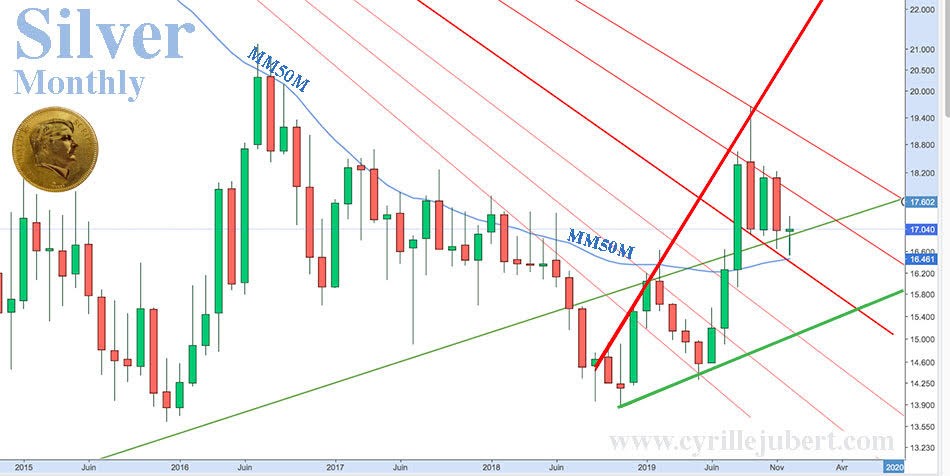 In weekly, the 200 weeks moving average was the resistance, that capped the silver prices since 2016, is now acting as support since the beginning of December.

The Fibonacci’s fan falling from the 2011 summit has served as an oblique support four times since September. It is high time to attack the next ones.

This Monday, December 16, prices are back over the axis of the long term trend whose origin dates back to at least 1996. 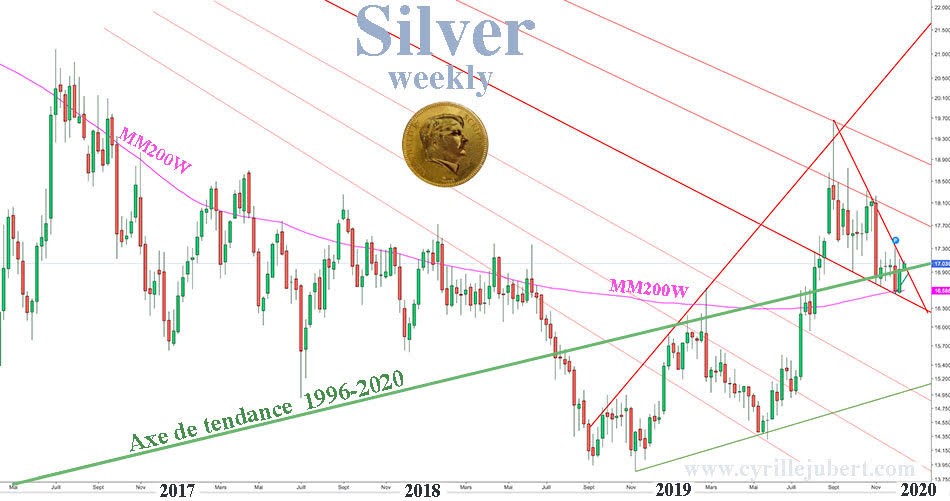 In daily, we see that the prices since September are caught in a falling wedge, whose resistance should break this week.

The outlets of a "falling wedge" are generally very bullish.

The MM20D has now become a support as well as the long-term trend axis. 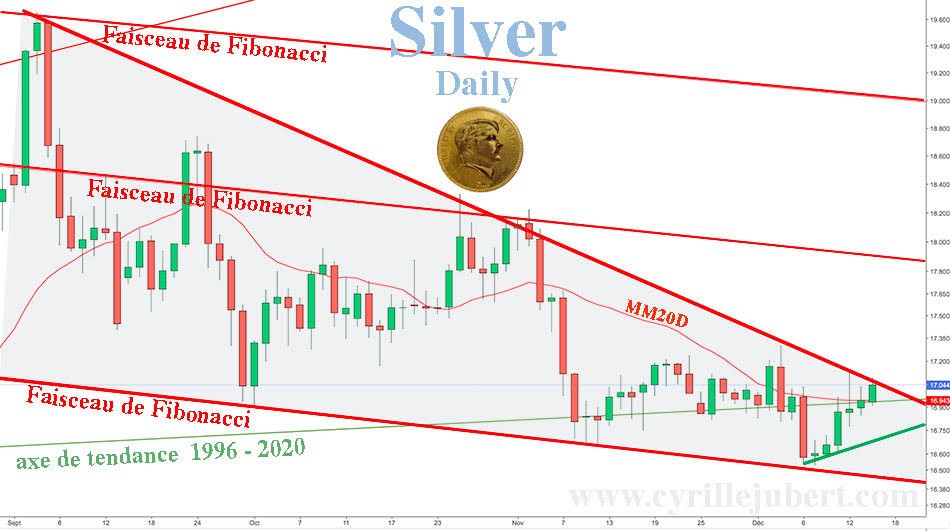 The silver goal is $ 21, which is expected to be reached in January. This level should then be broken, leading to a very sharp rise in short-squeeze mode at the end of February.

"The massacre of New Year's Eve"

For more than a year, Martin Armstrong has been advising companies, which are his clients, to roll over their debts by borrowing for more than 30 years, so as not to be caught in the liquidity crisis of 2020 and 2021. On November 19, he even announced that on December 31, when the banks would withdraw from the REPO market, we could measure fear on "the chaos scale of 1 to 10".

Remember that at the Jackson’s Hole meeting in August, Mark Carney, the Governor of the Bank of England, said: "World needs to end risky reliance on U.S. dollar, which is a liquidity trap for global finance." (Reuters)

On December 31, systemic banks must present a balance sheet on which they will be judged and taxed based on their dangerousness based on a number of criteria. Among these, there are the risks involved in some of their trades, but also the cash they have in reserve. For the last 18 months, JPM, the largest US bank, has invested the bulk of its cash in treasury bills. Until now, those liquidities were placed on the REPO market in very short term lending. On September 16, just after the attack on Saudi refineries, there was an acute crisis in this market, for lack of liquidity and because the banks no longer trust each other. The overnight rate jumped in a few seconds from 1.6% to 10%. A real disaster for global finance.

The Federal Reserve immediately injected tens of billions of dollars to try to control rates. Imagine what would have happened if this increase in the very short term yield had extended to all short and medium term rates. This would have caused the bankruptcy of companies, stock markets but also of the states. So that's the risk feared by the central banks.

Zoltan Pozsar, a finance genius, who despite his very young age, managed first at the American Ministry of Finance, then at the Fed, the systemic crisis of 2007-2009, before bringing his lights to the IMF. He had anticipated in August the September crisis. Recently, he described a possible scenario for December 31, according to which the systemic banks, could try to raise the level of their cash reserves, by selling off their positions even at a loss on the FOREX, which already could create strong disturbances on currencies…

Systemic banks could also mortgage their Treasury bills on the REPO market to generate cash, which would dry up this market, depriving hedge funds of liquidity. Hedge funds, which bet with an extremely risky lever, would then be forced to sell off their assets, which could generate a mortgage crisis, which could have repercussions on the equity markets...

One would easily believe that the Fed read the article by Zoltan Pozsar, since a few days later, Jérome Powell announced that to pass December 31 smoothly, he would increase liquidity in the various sections of the REPO market. In the end, the Fed will flood the market with almost $ 500 billion to avoid a crash at New Year’s Eve. What is certain is that the whole system is cracking. How much will the Fed have to inject at Easter?

Originally, the role of the IMF's SDR was to provide liquidity to the world market, when necessary, thereby relieving the role of the dollar. The September REPO crisis, which has been steadily increasing since and which should culminate on December 31, should push the SDR to the fore. For now, we see that both China and the European Union prepare to launch their cryptocurrencies in the coming months. One thing is certain, 2020 and 2021 will mark a major turning point in the History of money.

Hang on to your precious metals. They are your security in the mess ahead.