Throughout this article, we will show that an increase in the price of gold generally induces:

In microeconomics, elasticity is measured to assess the change in demand or supply for a 1% change in the market price. In the table opposite, we have compiled all the detailed data on the supply and demand of gold in an exclusive way. We have then made the relationship between the evolution of certain types of demand, and certain types of offers, in relation to the variation of the price of gold. This gives us the table of (average) gold elasticities for the period 2010-2022.

Thus, supply and demand are always in equilibrium. It should therefore be noted that an increase in the price of gold leads to an almost similar increase in supply on the one hand and demand on the other. But the detailed study of elasticities reveals the true nature of gold, and the mechanics that drive the players in this market.

The sensitivity of the demand for gold...

So how does the demand for physical gold react to the price of gold? Globally, a quarterly increase of 1% in the price of gold leads to a similar increase in demand. But there are irrefutable differences in the behavior of the various demands. Thus, we have selected three major types of demand: investment demand (coins and bullion), demand from ETFs and the like, and demand from central banks.

We then observe quite marked behaviors of each type of gold demand:

The sensitivity of the supply of gold...

Phenomena of compensation of the players 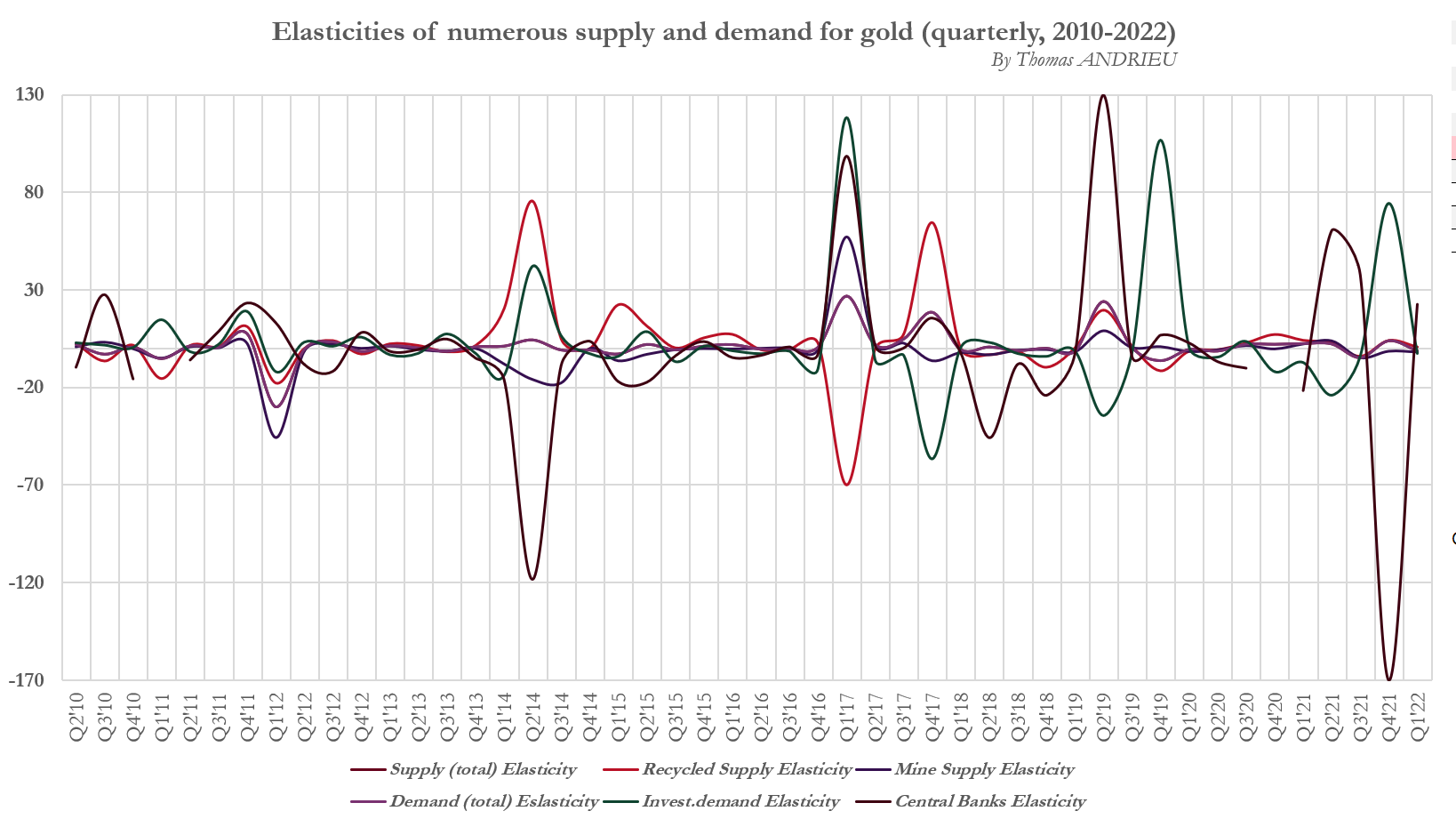 In general, elasticity undergoes an extreme type of behavior. Most of the time, the behavior of gold market agents is "normal" and regular. Then, exceptionally, agents experience large changes in behavior. An elasticity that is too high is therefore less relevant for measuring the behavior that would be usual among agents. This is the case, for example, with the very high elasticity of demand for ETF funds.

In short, the gold price appears to be a means of coordinating the players in the gold market. The exclusive study of elasticities, which measure the sensitivity of supply or demand to the gold price, allows us to draw several conclusions. First of all, an increase in the price of gold generally leads to a strong increase in investment demand, a great instability in the demand for funds which can produce large price variations, but also a more or less marked decrease in demand from central banks. On the supply side, an increase in the price of gold generally implies a slight reduction in mining supply, as well as a fairly marked increase in the supply of recycled gold.

In this sense, an increase in the price of gold in the long term is only possible if mining production costs increase, if holders of gold hold it permanently, or if investment demand increases. Moreover, it appears that certain players such as central banks or ETF funds can influence, sometimes quite significantly, the price of gold in the short or medium term.

Finally, an interesting conclusion is that gold sellers are willing to sell their gold without necessarily looking at the price. Gold buyers accumulate gold when it goes up. This explains a lot of the bullish behavior of gold over the very long term! In literary terms, this tells us a certain truth that shines through: gold is generally priceless in the eyes of those who own it.