The BLS (Bureau of Labor Statistics), the official American statistical agency, has just released a statement: inflation rose to 8.5% in March over the last 12 months. A figure not reached since the records of the 1970s, and an increase that nothing seems to be able to stop:

The first wave of inflation in the United States was triggered immediately after Richard Nixon abandoned the convertibility of the dollar into gold on August 15, 1971. His successor, Gerald Ford, took control, declaring inflation "public enemy number one" in front of Congress on October 8, 1974, when it reached 7%. Jimmy Carter succeeded him and faced a new explosion of prices that peaked at 13.5% in 1980. It ended with the appointment of Paul Volcker as head of the Fed, who raised the key rate to 20% in June 1981. The horse's medicine worked, and he was confirmed in his post by Ronald Reagan. Inflation was defeated for about 40 years.

The current rise in prices cannot be attributed to the slow recovery of supply chains after Covid, nor to Russia's aggression against Ukraine, as we are led to believe. It comes from afar and is the result of deep-rooted causes: the money printing of central banks and the energy transition. As we said in January: Inflation is here to stay.

Inflation excluding energy and food products ("core CPI"), which are considered more volatile, still stands at 6.5%. In any case, the rise in energy prices, once a certain level is reached, spreads to all sectors of the economy. As if this were not enough, persistent logistical problems are pushing prices up, as can be seen for new vehicles (shortage of semiconductors), and even more so for used cars (+35.3%!). 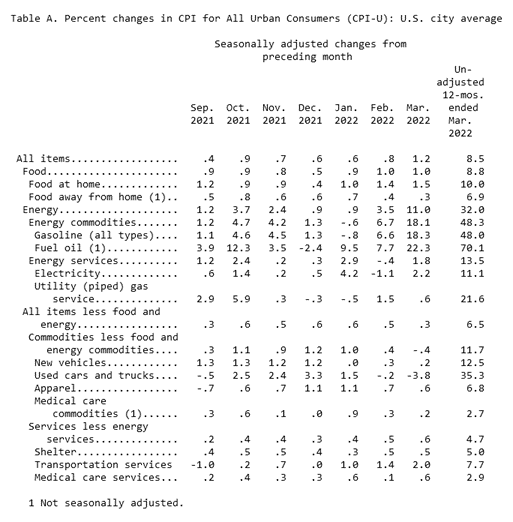 Will inflation continue to rise and beat the record rates reached in the 1970s? Money printing and the energy transition are taking us there... However, the United States has an advantage: it has significant energy resources that the Democrats have decided to curb but that the Republicans - the overwhelming favorites for the November congressional elections - could reactivate (development of shale gas, re-launching of the Keystone pipeline to bring oil shale from Canada, etc.). The prospect of lower energy prices is conceivable and, consequently, less vigorous general inflation.

The situation is likely to become even more worrying in Europe, where inflation is lower today, but which has almost no energy resources and is generally not very favorable to nuclear power. Even if the war in Ukraine stops soon, we hope, the sanctions will continue and will make energy more expensive, especially gas (expensive to transport if it is liquefied, and which the United States generously offers us...). We are betting that by the turn of 2022-2023, inflation in the eurozone will exceed that of the US. Get ready for it!