In February 2021, after the Wall Street Silver raid on SLV, the LBMA revealed that 85.4% of the official silver warehouse inventories belonged to the various ETFs. The LBMA silver inventories free for sale were therefore only 14.6%, i.e. 3 000 tons or 96 Moz.

While overall LBMA inventories shrunk by 17.9% in recent months, we may wonder how much real physical silver is for sale in the London market.

Now look at the same chart, focusing on the beginning of the war in Ukraine (February 2022):

Two Russian banks were members of the LBMA. They have been quietly erased from the lists.

These two Russian banks were not there to knit baby clothes. They necessarily had long and short positions. Somehow, after these sanctions, there must have been default by either the seller or the buyer, or both.

To comply with US and UK sanctions, the LBMA cut itself off from Russian silver production. That is to say 1,300 tons of silver per year, or 45 Moz or 5.41% of world production. 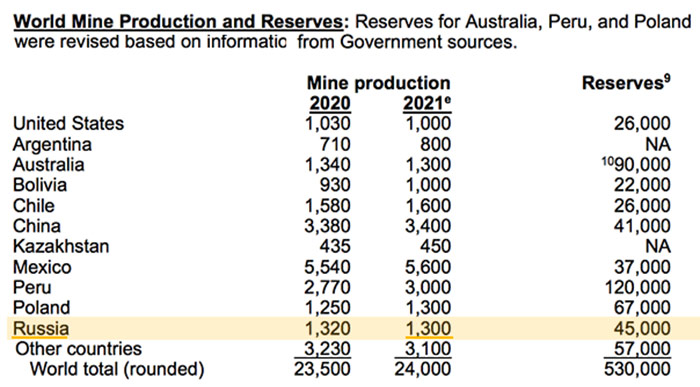 There are 39 451 Russian silver bars of 1 000 ounces at SLV, thus 39.4 Moz worth $1 billion, but difficult to trade today. A similar search could be done at PSLV, ZKB, JPM, HSBC, Kinesis or COMEX and LBMA inventories. It is likely that Russian bars make up nearly 8% of current silver inventories in Western markets.

After many round trips at the highest level, and successive and contradictory press releases, revealing a certain panic in this microcosm, it was finally decided that the Russian bars existing before March 7, 2022 were still LBMA approved but not those beyond this date, until further notice.

These already LBMA approved Russian silver bars have not officially lost their title, but have become difficult to trade. They have to be remelted in Switzerland to be bleached, which is expensive.

Remember that the silver market was heavily in deficit in 2020 and 2021.

- On October 18, 2013, China bought JP Morgan's Manhattan vault, the largest in the world, which is connected to the New York Fed's vault by an underground passageway.

China had the openly acknowledged intention of becoming the world's biggest player in the gold and silver trade.

How much of the silver accounted for by the LBMA and COMEX is in the hands of LBMA-accredited Chinese banks?

Aren't they in a position to blow up the rigged gold and silver market of JPM and the bullion banks at any time?

In a long interview with Reaction.life, Peter Hambro, former President of Mocatta, one of the main actors of the LBMA for 40 years, is not afraid to say that selling gold or silver in a metal account was extremely easy in the 1980s and did not require buying anything physical. He reveals that the “futures” market was created solely to drown the price of the real metal in a deluge of paper.

Isn't it telling that one of the pillars of the LBMA is now revealing the facts?

Will China block the LBMA and the COMEX as soon as it is ready to officially launch the BRICS international currency?

On the COMEX, silver inventories also fell by around 15% and the decrease in inventories for sale (“Registered”) has accelerated in recent months.

For those who follow the subject closely, like Michael Lynch (alias Ditch) on Reddit, it appears that when there are deliveries, the one who delivers, most of the time, brings in silver from outside instead of dipping into the inventory for sale.

These "Registered" inventories are supposedly for sale, but certainly not at current prices.

Are these supposedly for sale stocks belong to Chinese banks?

The COMEX is an enigma shrouded in mystery, like the LBMA.

At the dawn of a massive currency devaluation

In my previous article, I mentioned a trend in oil, which could bring it to $ 150 this summer, which would certainly lead to a massive rise in precious metals.

G7 leaders have announced that they are working on a mechanism to cap the price of Russian oil. In an analysis published on Bloomberg, JP Morgan analysts consider that Russia could in return limit its exports to the G7.

A drop of 3 million barrels per day would be enough to push the price of crude to $ 190.

Imagine the impact on gold and silver prices.

Only a few days after the G7 meeting, Russia announced that the North Stream-1 pipeline would be shut down for maintenance for 10 days, from July 11 to 21. Russia has sent a turbine to Canada for repair, but Canada is slow to return it. Nord-Stream-1 is not ready to be restarted, and Germany has only a few days of consumption in reserve. The threat of a gas shortage is growing.

We are already in a major energy crisis.

Remember that on March 16, the biggest European energy traders (Shell, Engie, Total, etc.) asked for help from central banks and States to deal with the financial difficulties generated by the sanctions against Russia. The ECB had let it be known several weeks later that it was not within its purview.

UNIPER, the German gas giant, is in negotiation with the State to avoid bankruptcy. The State will have to lend him 9 billion €. The company has contracts with its customers to supply gas at a fixed price, whereas now UNIPER has to buy gas on the open market at a much higher price than before.

The value of the UNIPER share has been divided by 4 since the beginning of the year.

The political choices of the German government, supporting Ukraine against Russia and opposing the opening of Nord-Stream-2, have a very high cost.

Saudi Arabia and Iran are in the process of integrating the BRICS.

The West could find itself in a situation very close to that of 1973, after the OPEC oil embargo.

All the political decisions made since December 2019 could seem totally suicidal for the economy, if you take them one by one. On the other hand, if by intellectual game, you are looking for an overall logic, you could find one.

- In 1944, in Bretton Woods, the United States imposed its views and the dollar against the European financiers who pushed the Bancor of Keynes.

- In 2009, China asked to change the international monetary system by abandoning the U.S dollar system, known as the "petrodollar".

- In 2021, COP26 and the Financial Alliance are launching an energy revolution, seeking to banish oil and gas.

- In 2022, Sergei Glaziev announces that a monetary system, close to the Bancor of Keynes, should be put in place between Russia's partners in Central Asia.

A few days earlier, Putin had pegged the ruble and oil to gold.

If you follow Andrew Maguire's videos, he seems to have been informed very recently by his Russian, Chinese and London interlocutors of what is being prepared, particularly for silver in the sino-Russian currency basket.

As President of Goldcorp, having developed several mines in Kazakhstan, he could be very well informed about the Sino-Russian and Kazhak Bancor. 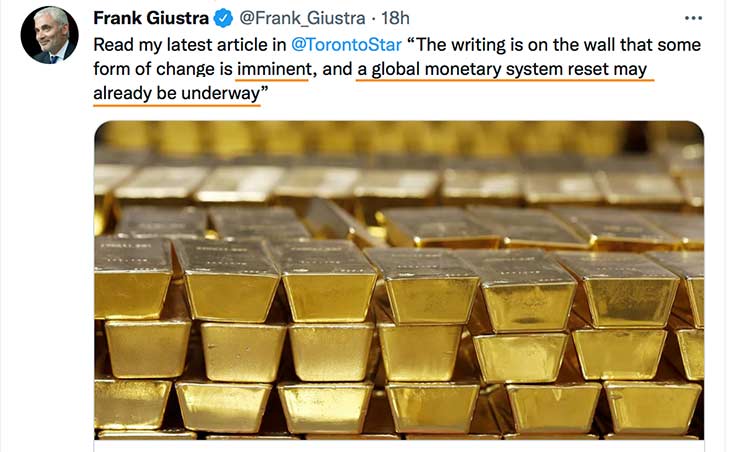 The Toronto Star article that Frank Giustra talks about is: “Why the U.S. dollar will be replaced as the dominant global currency — sooner than you think”

At the G20 last week, the IMF’s director said that since October 2020, nothing had been done to resolve the debt crisis and none of the decisions taken then had seen a beginning of realization.

China remembers that during the debt crisis of the 1980s, Japan, aware of its economic power, had accepted the “Plazza Accords”, which had completely ruined the Japanese economy. Today China refuses the solutions proposed by the Western oligarchy and probably prefers to let the situation deteriorate in order to impose its own rules.

The first of these is the change of the monetary system, the abandonment of the dollar and the transition to the BANCOR equivalent proposed by the BRICS. This implies a massive devaluation of fiat currencies or in other words, the massive revaluation of gold and silver.

It is at the very heart of the news.

It is in your interest to release paper-gold and paper-silver very quickly and to focus only on physical precious metals, directly held in your name.