As the constraints of rationing, loss of purchasing power and taxation of wealth loom large, this situation is reminiscent of the 1930s and Franklin Delano Roosevelt's confiscation of gold.

At his inauguration in March 1933, the newly elected President of the United States declared that "there must be a provision for an adequate but sound currency." But did the expected effects prove to be correct when similar problems had been solved by his predecessor in 1932? Was gold confiscation an effective way to finance the Democrat's program?

Two years after taking office, Roosevelt devalued the dollar by 40%, which had a serious impact on the United States' trade situation. Despite this, the United States managed to accumulate a relatively large stock of gold, but these policies did not succeed in making the economy grow in the long term, and it experienced a violent slowdown five years later, in 1938.

On April 5, 1933, just one month after his inauguration as the 32nd President of the United States, Franklin Delano Roosevelt announced the confiscation of gold in the United States. Gold coins, bullion and certificates had to be surrendered between April 5 and May 5, 1933, under penalty of ten years in prison and a $10,000 fine (the annual per capita income was $8,500 in 1934). Only the jewelry, dental, art and numismatic sectors were spared. But this decree was met with great reluctance, and some estimates published by Friedman and Schwartz showed that only 20% to 25% of the gold of private individuals was actually deposited with the authorities (the equivalent of just under 95 tons of gold!). 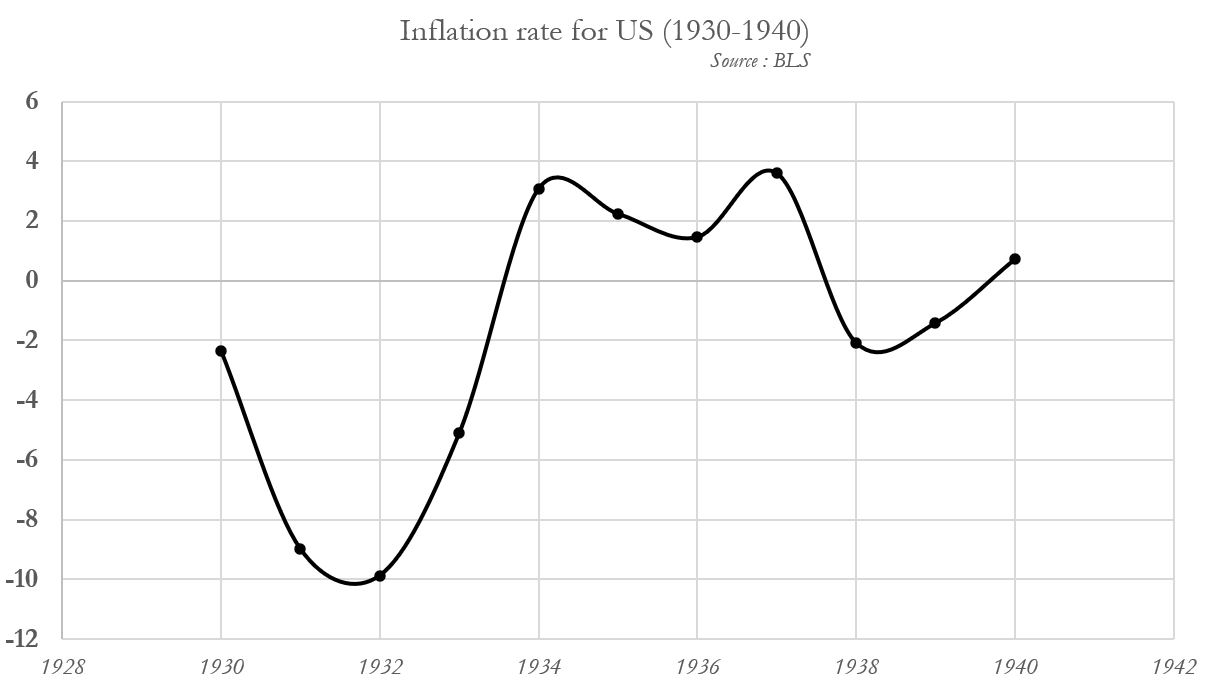 Despite the return of growth in 1933 and 1934, these monetary decisions led to a wave of moderate inflation. In fact, the end of a period of deflation had already begun in significant proportions during Herbert Hoover's term of office. The devaluation of the dollar thus allowed inflation to return in part. But deflation returned a few years later, in 1938.

Mechanically, the devaluation of the dollar also increased the flow of gold from abroad (increased exports). Over the eight years of the Roosevelt administration, the equivalent of several billion dollars of gold flowed into the United States. In 1934, gold held by banks and the Treasury amounted to $4 billion while gold held individually in the country amounted to just $400 million (10%). But conversely, the cost of imported goods increased significantly (devaluation of the dollar), sometimes by more than 70%. Thus, between the period 1927-1930 and the period 1935-1938, exports per capita decreased by 45% while imports per capita decreased by 44%.

In his inaugural address in March 1933, Franklin Roosevelt said:  "there must be an end to a conduct in banking and in business which too often has given to a sacred trust the likeness of callous and selfish wrongdoing." He went on to say, "There must be a strict supervision of all banking and credits and investments, so that there will be an end to speculation with other people's money; and there must be provision for an adequate but sound currency."

But these promises seemed all the more unstable because President Roosevelt's own advisers had suggested that he abandon the gold standard during his campaign. In the excellent book The Memoirs of Herbert Hoover (P.279), the 31st President of the United States recalled the state of the monetary situation in a speech on October 4, 1932. In effect, the United States was facing the threat of a major monetary crisis in 1932 due to a shortage of gold stocks. Despite this, President Herbert Hoover managed to keep the dollar safe without resorting to devaluation or confiscation policies. In his memoirs, Herbert Hoover writes:

“These drains [of diminishing gold stocks] had at one moment reduced the amount of gold we could spare... where we could not hold to the gold standard [more than] two weeks longer because of inability to meet the demands of foreigners and our own citizens for gold.”

At this point in 1932, the equivalent of $1 billion was hoarded by citizens, compared to $1.5 billion of federal system money (60% paper/40% gold). This represented the equivalent of a gold stock worth $2.5 billion in June 1932, which also corresponds to the low point of the recession. At the beginning of 1932, the tension was palpable among political and monetary authorities. The quantities of gold had to be maintained to ensure the stability of the dollar and to avoid the failure of the financial system. In his speech in early October 1932, Hoover declared:

" […] Some urged . . . liquidation until we had found bottom. Some people talked of vast issues of paper money Some talked of suspending payments of government issues. Some talked of setting up a Council of National Defense. Some talked foolishly of dictatorship.... Some assured me that no man could propose increased taxes in the United States to balance the budget in the midst of a depression and survive an election.[…] "

On the possibility of issuing paper money to ensure the stability of the dollar, Herbert Hoover judged that "All human experience has demonstrated that that path once taken cannot be stopped, and that the moral integrity of the government would be sacrificed." Faced with this desperate situation, it was decided to boost the gold trade with foreigners. And while foreigners withdrew their currency during that half of 1932, the currency problem was solved by the summer of 1932 when $275 million in gold flowed in from abroad. The stability of the dollar was assured, and the Depression completed its first major phase.

But October 1932 was drawing to a close and the election campaign between Hoover and Roosevelt was raging. Until then, FD Roosevelt had almost never mentioned the monetary question, despite the fact that his program was oriented towards the "New Deal" and the revival of the economy. Attacks on Roosevelt for his lack of a monetary program multiplied. FD Roosevelt ordered a response through a speech by Senator Glass, who said that there had never been a problem or a risk of leaving the gold standard. This speech was described by Hoover as "one of the most insulting of his career". A few years later, the same Senator Glass recalled the importance of the gold standard and of maintaining it, in contrast to the remarks made during the campaign.

The monetary difficulties of the Great Depression are a long story that has its roots in the 20th century. The First World War had forced many countries to detach gold from the money supply. In Germany, the convertibility of the mark with gold was suspended in favor of a new forced currency, the papiermark. But the suspension of convertibility did not affect the United States, and the devaluation of European currencies became obvious. The dollar/mark exchange rate thus rose from 4.2 in 1914 to almost 42 six years later. The franc and the pound sterling were not spared in the face of the explosion in public spending.

It was not until the Genoa agreements in 1922 that the first attempts were made to restore the gold standard. Moreover, these agreements left it up to individual countries to choose whether or not to restore the gold standard, or to choose the dollar and the pound sterling as their reserve currencies. Inevitably, this gave monetary privilege to the United Kingdom, and for the first time in history, to the United States.

Thus, it is estimated that the amount of gold hoarded by the French in 1914 was about 1600 tons, to which must be added a cash balance of 1030 tons of gold for the Bank of France at the same time. In the United States, gold stocks were still limited at the beginning of the 20th century. In 1915, the gold stock of the federal banks of the United States represented $250 million (or a little less than 370 tons of gold). The value of an ounce of gold was set at $19.25 at that time.

During the 1920s, the United States took advantage of its recent position as the world's largest economy and a pillar of the international monetary system. During the decade of the 1920s, despite the depression of 1921 (-7%), the U.S. economy grew by over 40%.

The confiscation of gold itself was not a great success for JD Roosevelt. The gold confiscated was just the equivalent of $63 million at a price of $21 per ounce (or $105 million after devaluation). The negative effects remain more in the trauma that persists among Americans and investors than in the concrete effects of this measure on the economy. Moreover, it is often forgotten that President Herbert Hoover before him had experienced similar problems during the worst of the Depression. Thus, the gold reserves of the American banking system fell to their 1928 level in 1932 alone. In this sense, Roosevelt's confiscation of gold responded to an essentially political logic, which was also observed in France and fascist Italy. During its election campaign, the Democratic camp had shown its sympathy for the exit from the gold standard or a return to the bimetallic system, contrary to what was achieved in the years that followed.

At the same time, France had similar practices by prohibiting in October 1936 the holding of more than 200 grams of gold (which was worth relatively little at the time). The possession of gold was even perceived as contraband. Faced with the failure of this policy (less than 90 tons of gold recovered compared to the 1600 tons held by the French fifteen years earlier!), the law was repealed in March 1937. This echoed the confiscation of gold by John Law in 1720 in Paris. For its part, fascist Italy experienced similar practices. Benito Mussolini demanded that private individuals hand over their gold in order to finance the economic recovery. The equivalent of 35 tons of gold would have been collected. The period of confiscation in the 1930s also recalls a context of political tensions, deteriorating economic conditions and the militarization of states.

As a result, the confiscation of gold in 1933 was far from a great success for Franklin Delano Roosevelt. His predecessor described the 1933 gold confiscation as "a trivial return [to the citizens] for such a flagrant governmental violation of promised word and personal liberty"[1] !

History is always signed with the seal of its players...