We will find out on Friday August 5th, where the LBMA silver inventories are, but we already know that those of the COMEX are decreasing every day.

Here is an update on Tuesday, July 26th:

The next day, Wednesday, July 27th, inventories for sale ("registered") fell to 57.8 Moz and the overall COMEX inventories fell 3% on the day.

JP Morgan's "registered" silver inventory at COMEX is now only 19.6 Moz, while it approached 39 Moz in March (source).

Graphically, each time a resistance is crossed, the prices must always come to re-test it to verify that it has become a support. It's a pullback.

In practice, the bullion banks in charge of controlling the prices of precious metals take short positions each time a resistance is crossed and resell these "shorts" when the prices comes back down to re-test the resistance. The very violent upward push of July-August 2020 had been made without a pullback on the resistance, which had been blocking prices since 2014. For two years, the bullion banks had had heavy short positions, which risked becoming very expensive if the price of silver was flying away because of the growing scarcity.

Since July 14, silver prices have repeatedly tested the support at $18.35, allowing the bullion banks to sell their “short” positions. 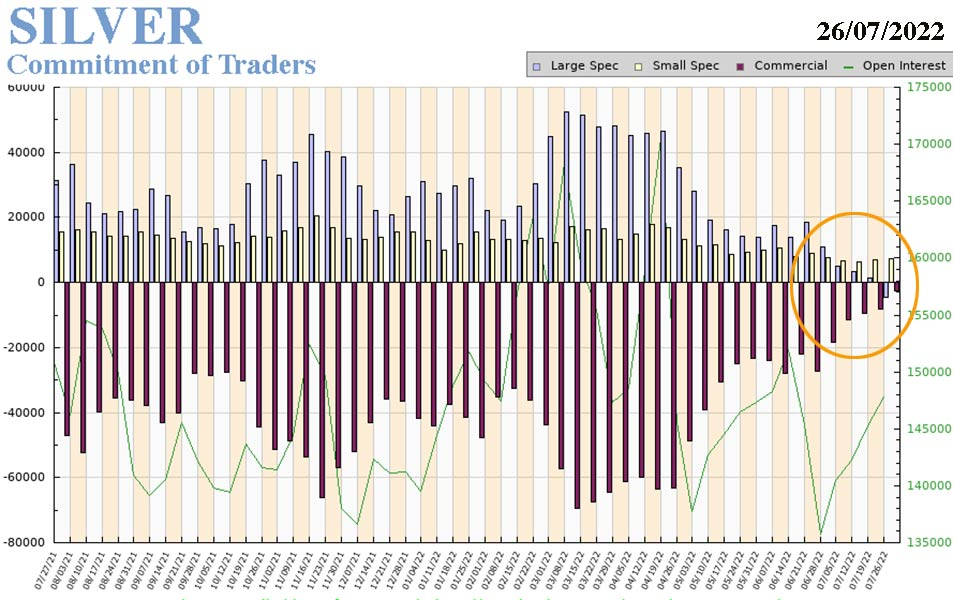 Large Traders are now shorts 22 Moz on the COMEX. 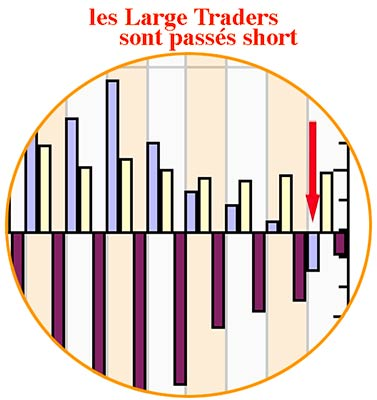 The chart underneath, which is already a week old, shows that banks' positions are exceptionally bullish.

For Andrew Maguire, the banks had been “long” on the LBMA for several months, their “short” positions on the COMEX being only a hedge.

In The Troubled Waters Of The COMEX

While the LBMA's OTC (over-the-counter) market is extremely opaque, what happens behind the scenes at COMEX is no less so.

Besides the huge needs of silver of the photovoltaic sector, besides the demand for physical generated by the Wall-Street-Silver movement, and besides the energy crisis generated by COP26 and amplified by the U.S sanctions against Russia, what is currently happening in the silver warehouses is probably the outcome of the short-squeeze of February 24th, 2022, which was snuffed out. 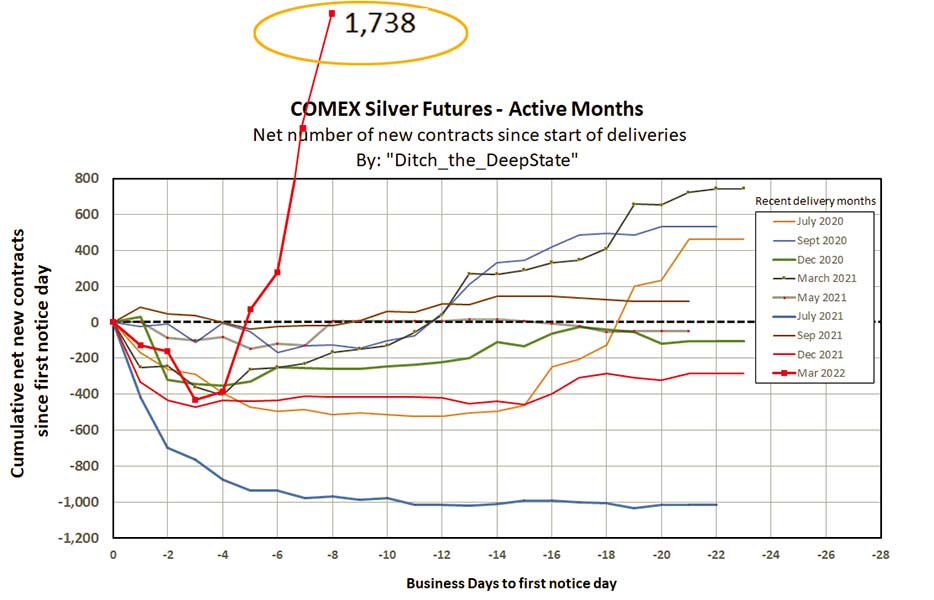 These facts were revealed by Ditch of the Wall Street Silver, which does a remarkable daily job of monitoring each ones of the actors approved on the COMEX.

- On Thursday, February 24 at midnight, there were 113.7 Moz of silver in delivery requests, while officially there were only 80 Moz registered at the COMEX.

- On Friday morning, February 25, there was only 79.9 Moz of silver in delivery requests, almost all of the silver to be sold.

- On Tuesday, March 1, there were still 42.86 Moz awaiting delivery, as JP Morgan moved 480,000 ounces from "eligible" to "registered" and 5.5 Moz officially left warehouses from SLV.

JPM is on the move. It moves small quantities from “eligible”inventories (not for sale) to “registered” inventories (for sale) every day, before delivering pending requests.

On the one hand, there were many requests for additional deliveries, which came to accumulate day after day...

There is something magical about paper-silver!

At the same time, the number of EFPs issued by COMEX to be delivered to London is significant:

By following this fascinating soap opera day by day, here is the state of affairs of the COMEX on July 27th: 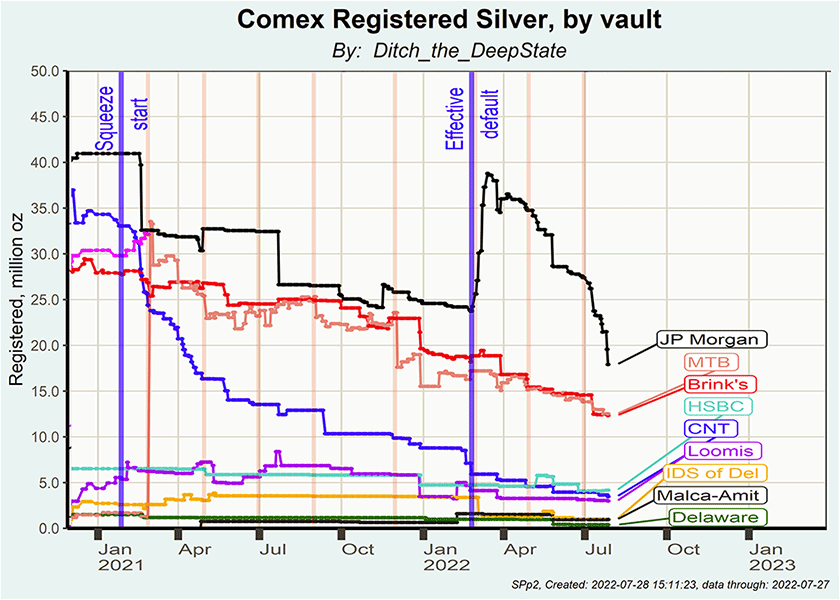 Is this all just a little internal cooking recipe behind closed doors or does it reveal a bigger problem?

The problem that appeared on the COMEX on February 24, 2022 seems to be linked to the Russian intervention in Ukraine, which was triggered on that date. The US government had announced that Russia would enter the war from the 16th, when requests for deliveries began to multiply. It should be remembered that on November 12 in "Live From  the Vault"  Episode 52, Andrew Maguire announced that Standard Chartered Bank had purchased all future production until summer 2022 from one of its largest suppliers. Over the course of the episodes, in particular Episode 65, Maguire revealed that Standard Chartered has taken all the silver production from the two largest Russian refiners until July 2022 and has hedged this purchase of physical on the Comex to have liquidities.

But with the war in Ukraine, russian physical silver was blocked and then very quickly banned. Standard Chartered found themselves in short squeeze. The rest is cooking between bankers, managed by the main player in the precious metals market, JPM, which is still trying to avoid a market break-up.

As we see on this graph of the past three years, the silver lease rate has taken off in recent months: 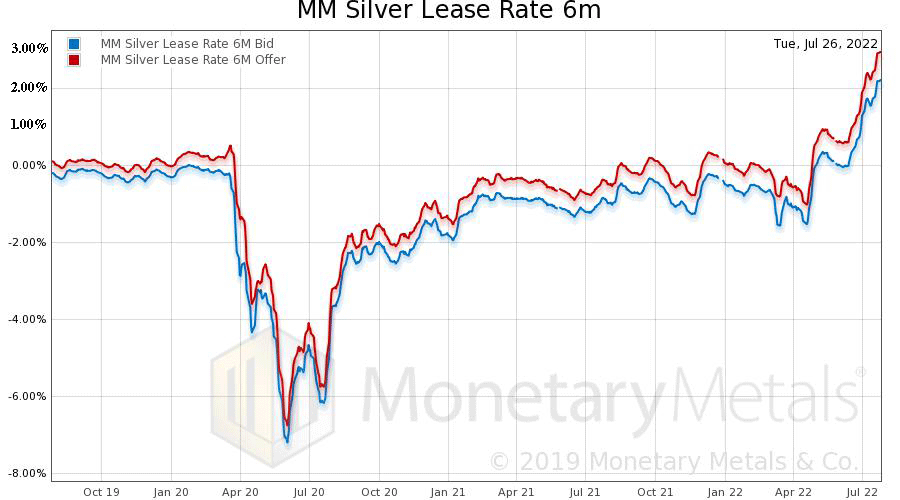 Looking on the long term, rising rates have always been the harbinger of rising silver prices.

We should see a significant rise in silver in the coming months. 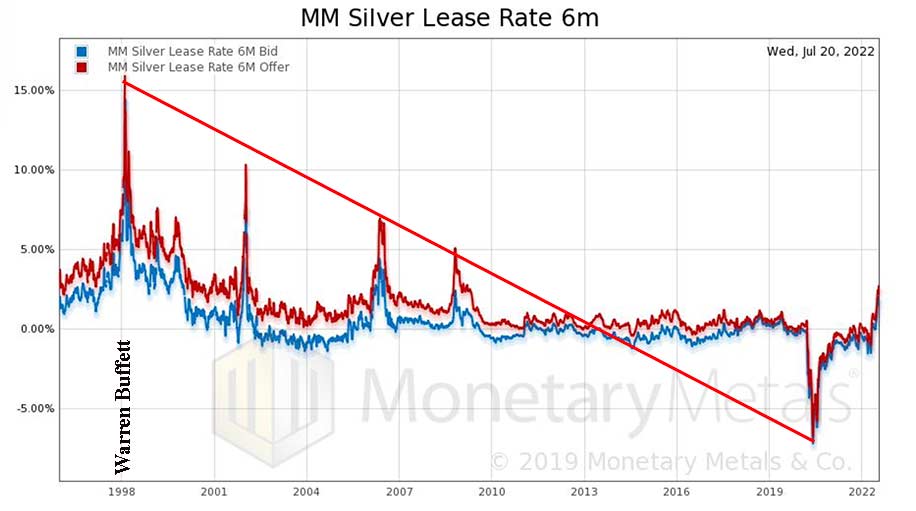 Without taking into account the 5 million one-ounce coins sold by the US Mint in January, which is often an exceptional month, we see a very significant drop in sales, month after month.

July does not reach a third of February sales and barely represents half of those of April or June.

It is not the demand that is lacking, far from it, since the Wall Street Silvers continue to buy the silver available throughout the world, driving up the premium to 55% on the Silver American Eagles. Last week, a big fortune in Texas ordered $50 million worth of coins from a retailer, including 900,000 Silver Eagles. Bill Holter on USA Watchdog said that "this deal cleared out the wholesale market for U.S. silver coins, including so-called junk silver."

Rather, the drop in sales comes from the difficulty of the US Mint finding silver to mint its coins. 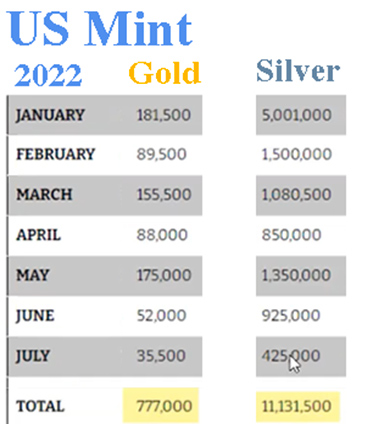 In June, India weighed heavily on the market by importing 1,000 tons of silver.

Despite the very low import volume in summer 202, India imported 3,429 tons in the last 12 months. 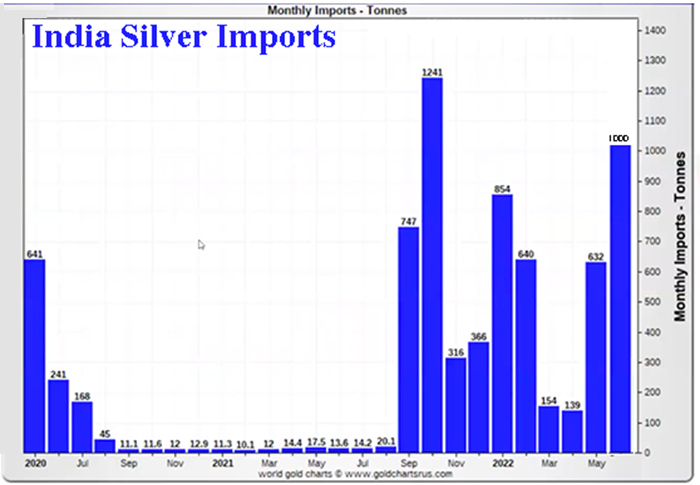 In a video posted after the nickel market crash on the LME, Andrew Maguire hinted that the confidence was gone and that many brokers were leaving the market. According to his sources, the same was true for the London precious metals market, and other markets were to emerge.

This Friday, July 29th, 2022 India inaugurated its own gold and silver market: India International Bullion Exchange (IIBX). In his speech, Prime Minister Norendra Modi said the country would not only be known as a big market for gold and silver, but also as a market maker.

In anticipation of the opening of this new market, India repatriated in the spring all the silver, that had until then been stored in London. I don't follow closely the gold market, but they certainly had to repatriate their gold as well.

China launched its gold market... Russia too... and now it's India's turn.

Obviously, the BRICS have decided to be independent of the London or New York fixing.

The cost of energy is soaring:

The price of gas was multiplied by 20 in Japan and Korea, and by 48 in the Netherlands.

Europe must run its industry with only 20% of the capacities of Nord-Stream-1, and still refuse to give the green light for the opening of Nord-Stream-2…

Who plays against his own camp and leads the EU to an economic collapse?

Since gold and silver prices are closely linked to energy prices, the revaluation of precious metals seems imminent.

And if you had a somewhat Machiavellian mind, you might think that COP26 is pulling off a blow of billiard with five bands.

COP26 declared war on oil, gas and coal, instantly turning itself into an enemy for producing countries.

NATO and the G7 (i.e. the same) applied sanctions against Russia following the operation in Ukraine, amplifying the energy crisis worldwide.

In response, Russia pegged its currency and oil to gold and unveiled on March 27th its Bancor project of a currencies basket backed by precious metals and commodities.

Saudi Arabia, Egypt, Iran, Argentina, Turkey… are candidates to join the BRICS, which could be ready to launch a global monetary system favoring producing countries over consuming countries.

Where diplomacy had failed since November 2008, COP26 will have succeeded in just one year channelling all the forces of emerging nations towards a common project. We are witnessing a major change on the geopolitical chessboard.

Inflation is currency devaluation. Did you protect your wealth with enough physical gold and silver?