The European PPI is up 36.8% in March and is now well above the UK PPI: 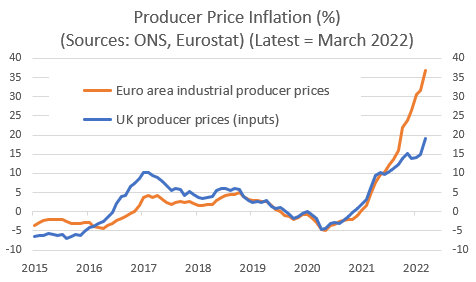 The surprise continuation of this inflation figure prepares us for an explosive rise in the prices paid by European consumers, starting in the next few weeks. Attempts to control prices will increase, and with them the risk of shortages. Refusing to pass on this increase in producer prices to consumers and wages risks adding to an already tense social climate throughout the continent.

Inflation, which so many economists had predicted would be transitory, is accelerating. This week, it is aluminum that is soaring: 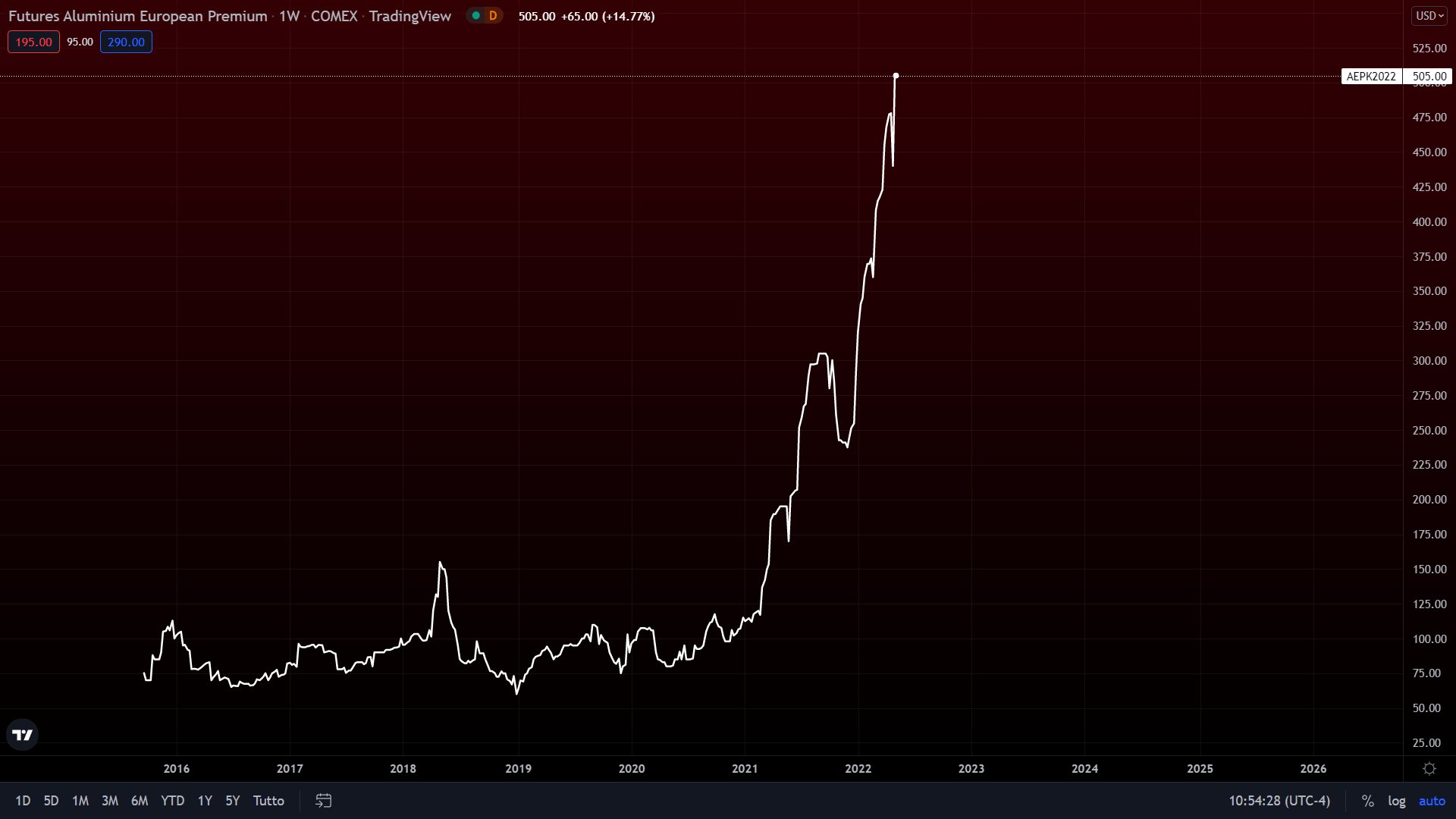 The price of gasoline is rising, but it is diesel that is breaking all records at the pump: 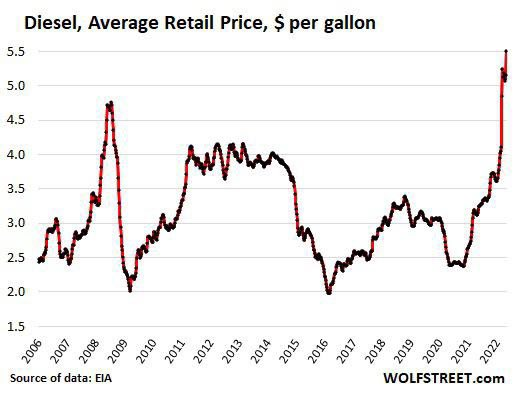 The shutdown of the production line in China, combined with soaring diesel prices, is a threat to the entire road transport industry in Europe and the United States.

On the other hand, the shift in European demand from Russian gas to US liquefied gas has led to a surge in US natural gas prices. As of the beginning of May, the 8% increase in a single day has pushed US gas prices to their highest level since 2008.

Inflation has already spread widely to wages across the Atlantic. The average wage cost is surprisingly up this month: the employment cost index is at its highest level since 1995. 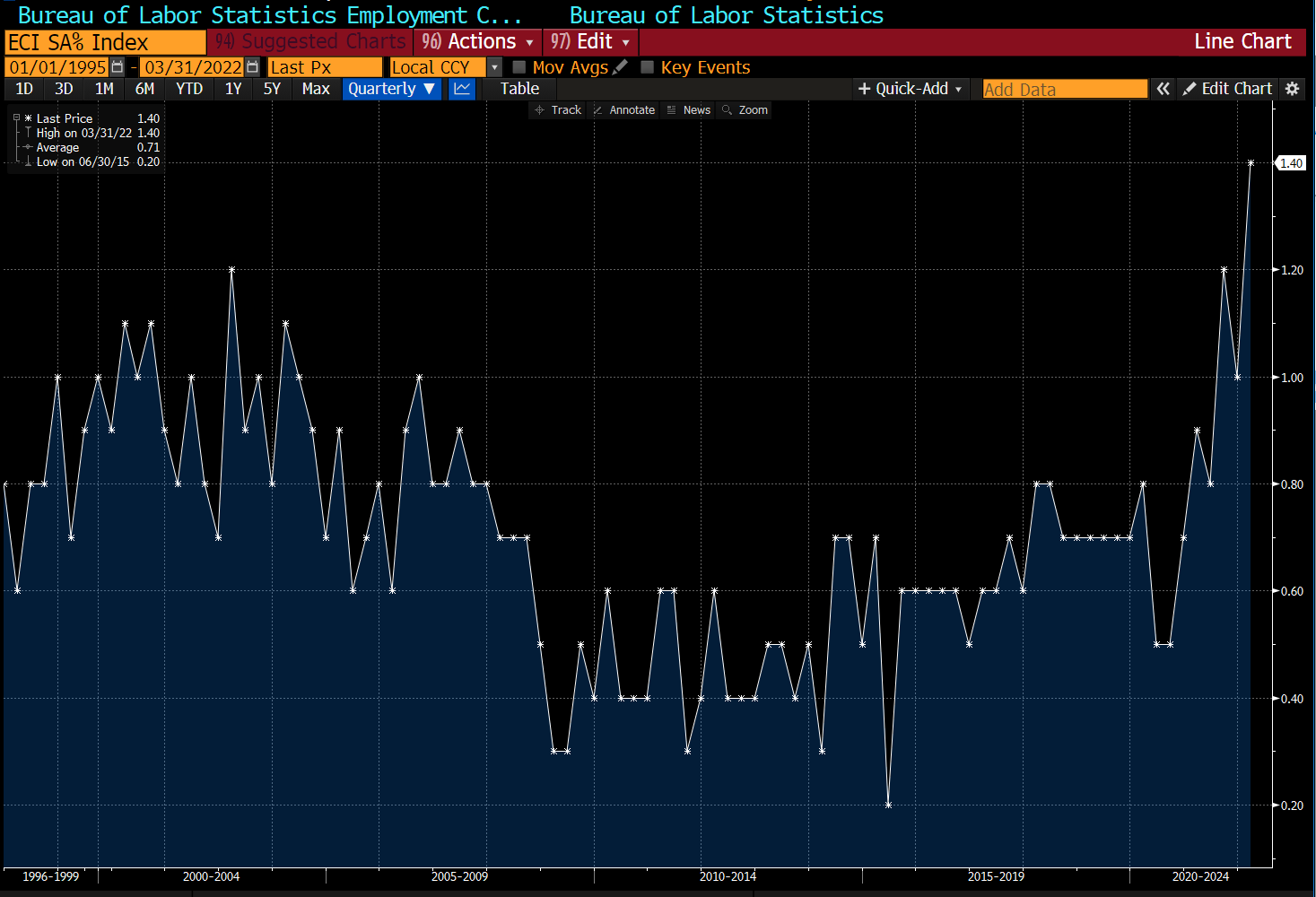 4.5 million Americans have left their jobs in search of better pay. The gap between the number of job openings and job seekers continues to grow. There are more than 5.6 million unfilled positions in the U.S., putting further upward pressure on wages.

This pressure on wages is also emerging in Germany, where the WPI is soaring to its highest level since 1992: 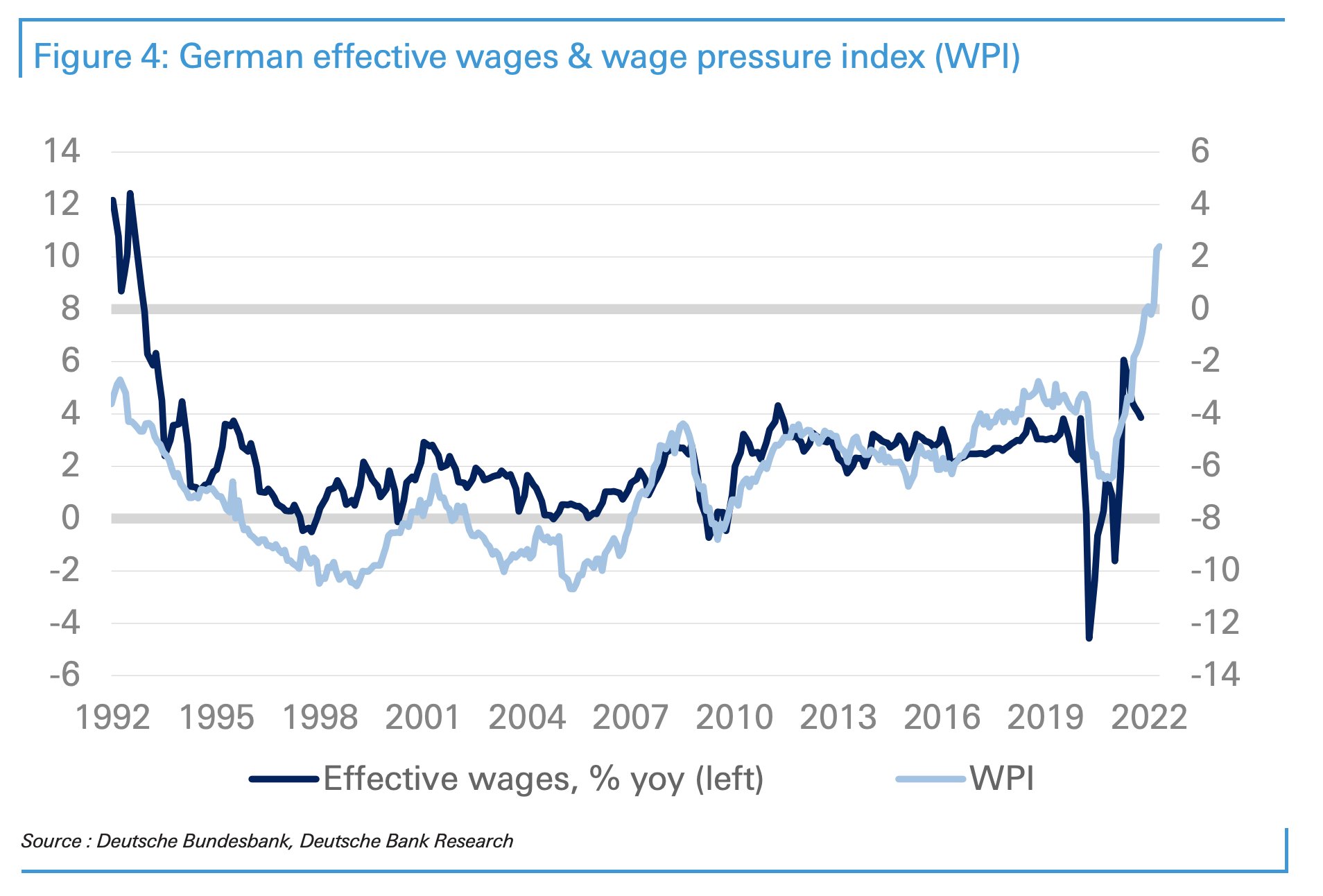 This inflationary contagion pushed the Fed to raise its discount rate by +0.50%, despite the risks of entering a recession that this radical decision generates.

The American consumer has weathered the shock of rising prices rather well, as credit conditions have remained very favorable. For example, despite the increase in the price of new cars, dealers have maintained 0% financing with no down payment, which has supported demand. Credit conditions are a key argument for supporting consumption in the United States. The change in these favorable financing conditions is causing some observers to anticipate a slowdown in demand. Rising prices are limiting demand, but rising rates may be even more damaging to U.S. consumption.

Inflation has already caused the collapse of American purchasing power: 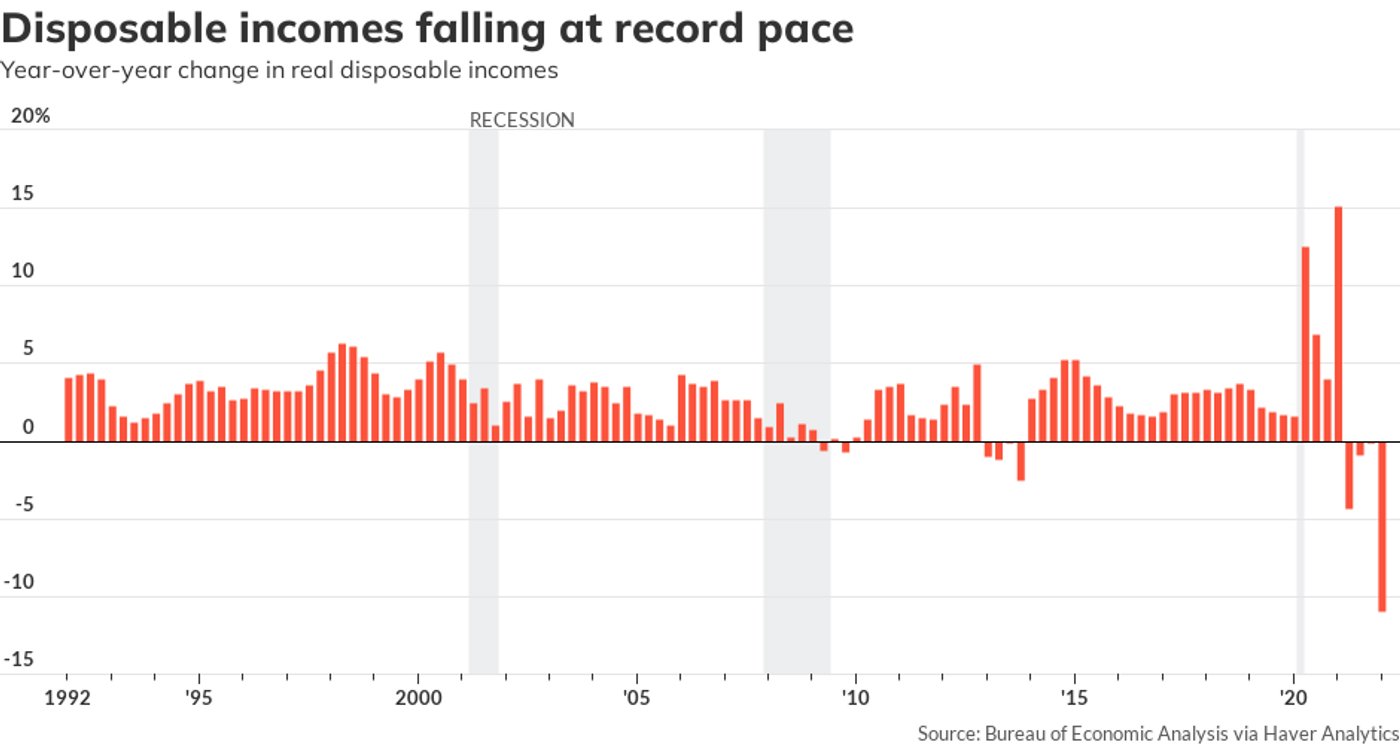 Americans are cutting back on their spending. The leisure sector is logically the first to be affected: 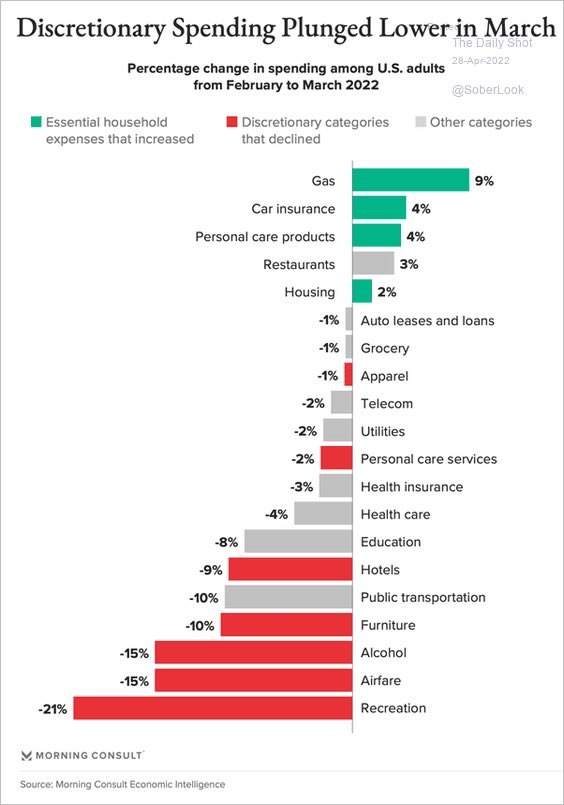 The rate hike comes at a time when the effects of inflation are beginning to slow the level of US consumption. The Fed's timing could not be worse. The delay in raising rates is going to be very costly.

In effect, rising rates now threaten other sectors such as residential real estate in the United States. 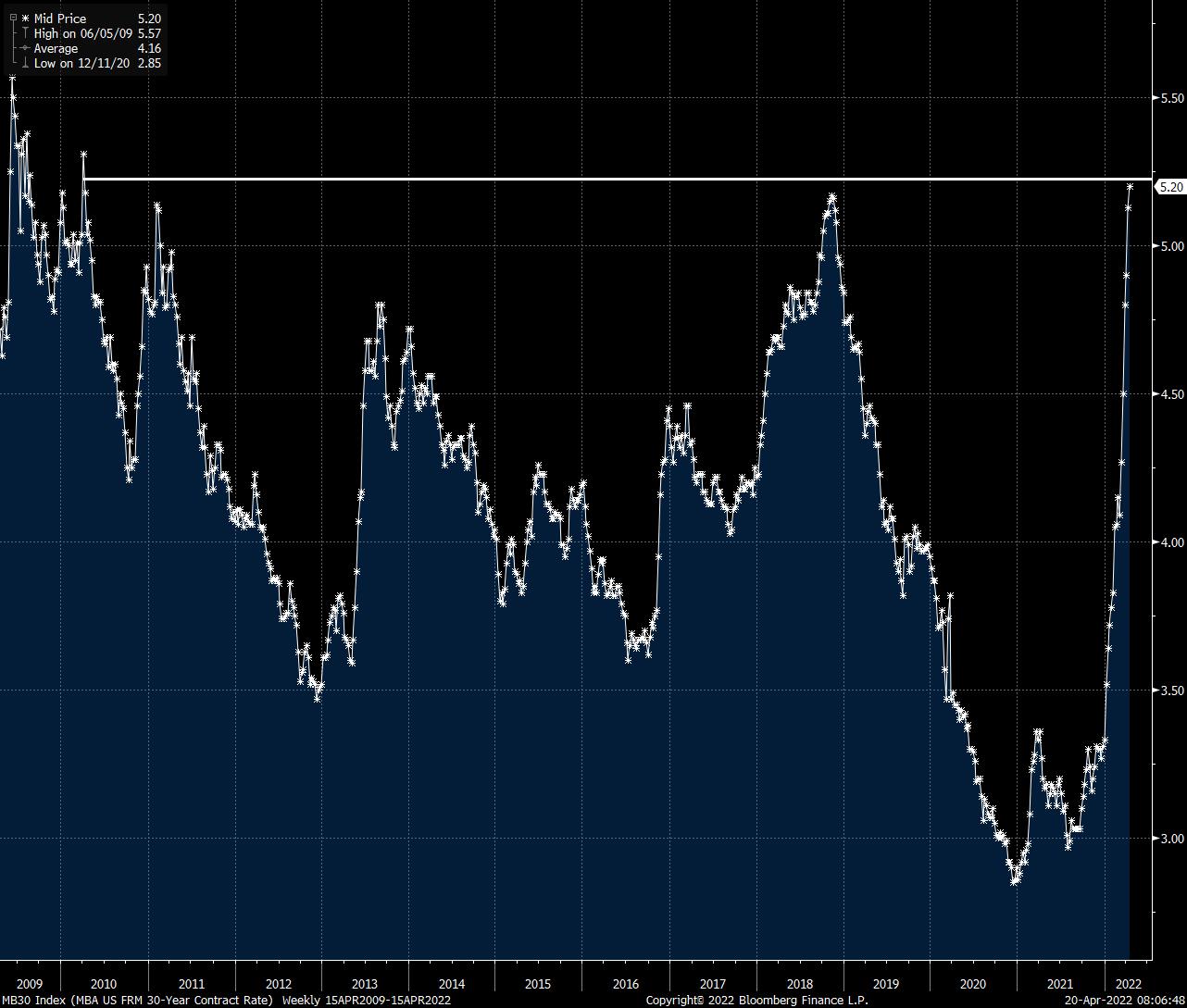 The homeownership index collapsed in a matter of weeks to its 2008 lows: 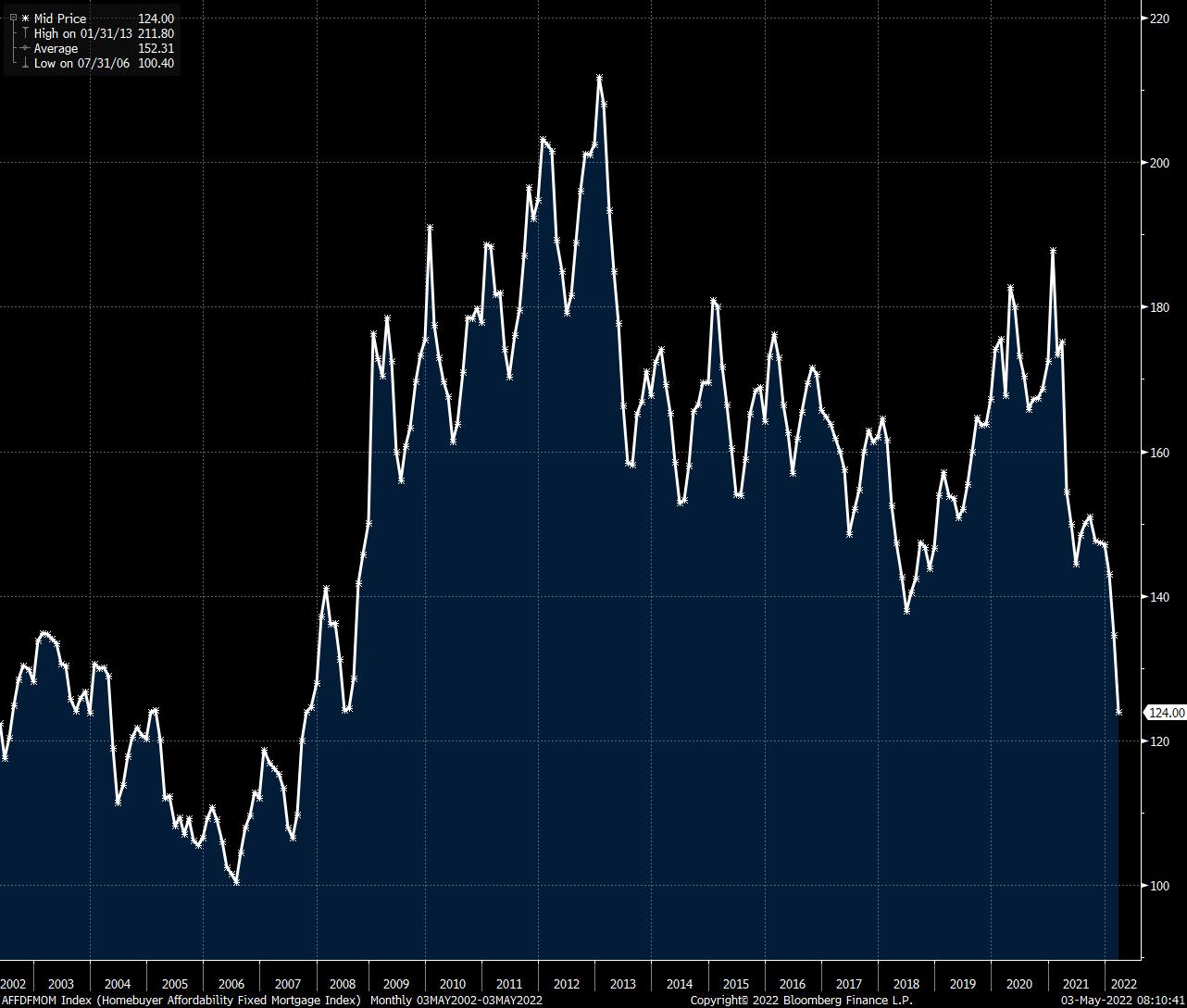 In a context where mortgage refinancing is now impossible, the new credit conditions generated by the Fed's change of course threaten to collapse demand in a real estate sector that was previously resistant to inflation.

On the other hand, this rise in rates is causing European investment high-grade bond yields to rise (almost as sharply as in 2020), and they are now above the peak reached during the pandemic: 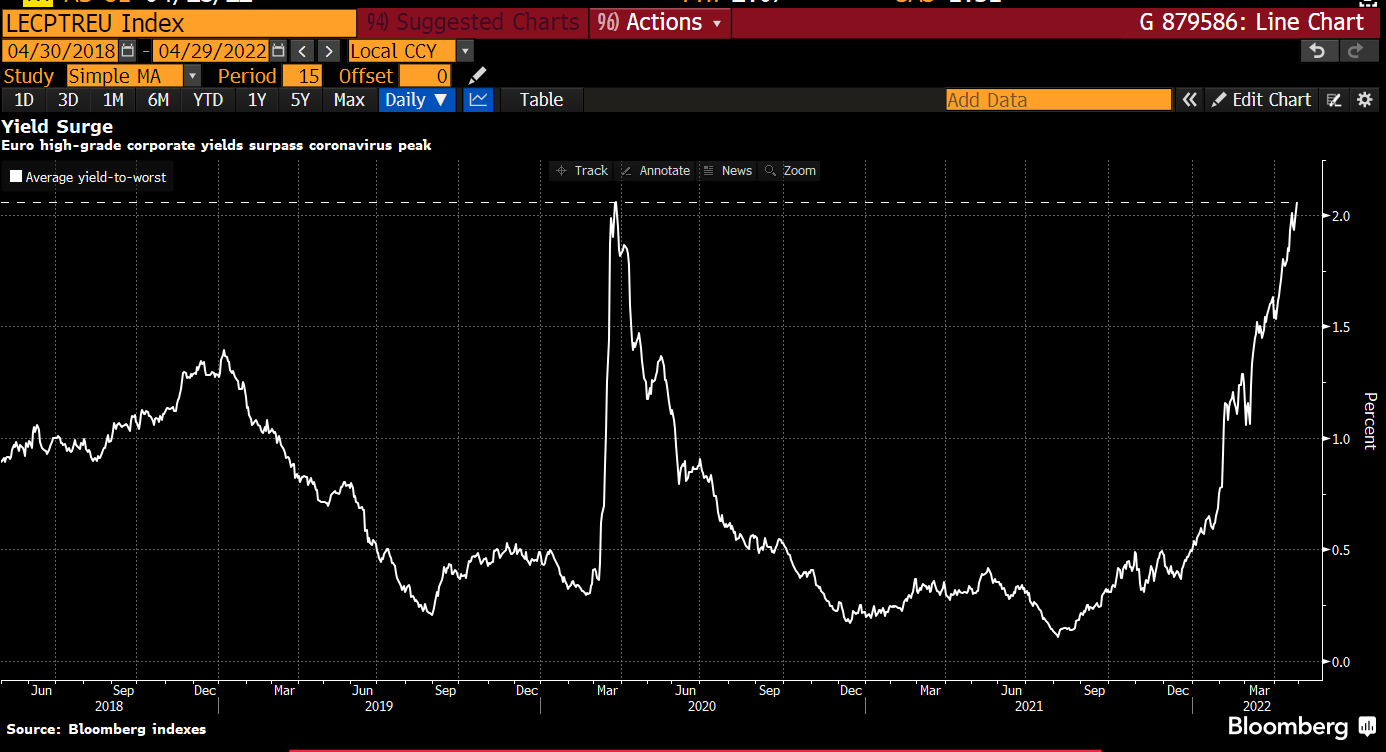 The rate hikes, if they continue, threaten to push Europe and the United States into a severe recession.

The collapse in demand that a potential recession would cause could depress commodity prices... provided that supply remains at levels comparable to those seen in previous recessionary periods.

Chinese demand is also likely to impact the level of supply once lockdown measures are lifted. The Chinese blockade is a risk to global summer economic activity. On the other hand, Chinese demand will certainly pick up this summer, as evidenced by new loan applications exceeding $1 trillion in the last three months, a historically high figure. Chinese consumers are behaving in the same way as Westerners during the lockdown: they are glued to their sofas, preparing their future purchases!

In a context of reduced inventories, there is no indication that commodity prices will fall substantially: even if demand decreases, it is the weakness of supply that dictates the level of prices.

And the level of supply is not about to change in geopolitical conditions that are changing day by day. The globalization of trade is gradually giving way to a mercantilist system where customs barriers, embargoes and protectionist measures limit trade. Access to resources is logically more complicated, and the level of supply is becoming more and more strained.

In this environment, it makes sense for gold to find buyers on its declines, however small. Investors who buy physical gold at this price level are buying insurance against the risk of a monetary policy error by the Fed.