The correction in gold prices last week was of a rare violence. In barely a few hours, the gold price fell by more than 100 dollars, one of the most significant falls in terms of volume in such a short period of time. It is one of the most brutal attacks since I first started following this market (in 1995).

In the end, gold fell for 11 days straight... The price of the metal is now in a situation of being massively oversold when one looks at the RSI indicator over 7 days. In fact, gold has never been as oversold as this since August 2018, when gold was listed at around $1175.

For those who still had some doubts about the control of this market by the Market Makers, the GLD tracker finished at $164.98 on the maturity of contracts, enabling these institutions to avoid paying the numerous call options at the threshold of $165. At this level, the put holders are walking away with derisory gains. Mission accomplished.

The mining stocks corrected brutally as well, but ultimately far less than expected given the violence of the metal’s fall. The latest corrections of this kind had a far more devastating effect on the sector a few years ago. There, too, the mining stocks are in an oversold situation, with an RSI that has gone from 72 to less than 30 in barely a month. I don't recall ever having seen such a huge plunge in such a short period of time. Today, the mining stocks are at the same RSI level as in March 2020. This is good news for all those who are coming back into the sector. The same opportunity as last year presents itself once again; it’s a state of affairs no-one could have hoped for just a few months ago.

What was it that caused the sheer scale of this fall? Did the Fed raise interest rates brusquely and sharply, leading to a reaction like this on gold? The conclusions of the Fed’s meeting last week are far from dramatic, though. Nonetheless, they had the effect of an electric shock.

Roughly speaking, we could summarize the conclusions of that meeting in a single sentence: the Fed is merely in the process of debating whether a hike in rates is foreseeable in two years’ time. The Fed threatens that a first rise in rates will come in 2 years’ time (!) and it’s as if the market had just learned that the Fed had drastically hiked its rates by 50 points...

Despite the urgency of the situation in terms of the current level of inflation, the Fed hopes that the rise in prices will fade away without it having to act now on the rates. It’s a little like an overweight person promising they will go on a diet in two years’ time, to reassure their doctor. Even James Bullard, the chairman of the St Louis branch of the Federal Reserve, acknowledges that inflation is at higher levels than expected, and not taking action straight away is risky.

So what was it that may have caused such a correction to gold?

For two years now, all the economic indicators have been at standard deviation levels that are almost illegible. Trying to predict the markets’ behavior with such certainty with the help of an action scheduled for two years from now makes no sense. What does that matter, though: it is current perception that dictates short-term movement.

This change of perception is also being driven by China, which is in the front line in relation to the nefarious effects of inflation. The country is thus congratulating itself for having managed to contain the rise in prices for commodities. At the same time, China has just ordered an initial 8 cargos of soybeans (480,000 tons) for the fall, taking advantage of a correction to the price of grain crops.

The inflation has caused an enormous amount of volatility on the prices of commodities, and every correction is now bringing in buyers at cheap prices... Do you remember the chart for construction lumber from last spring? 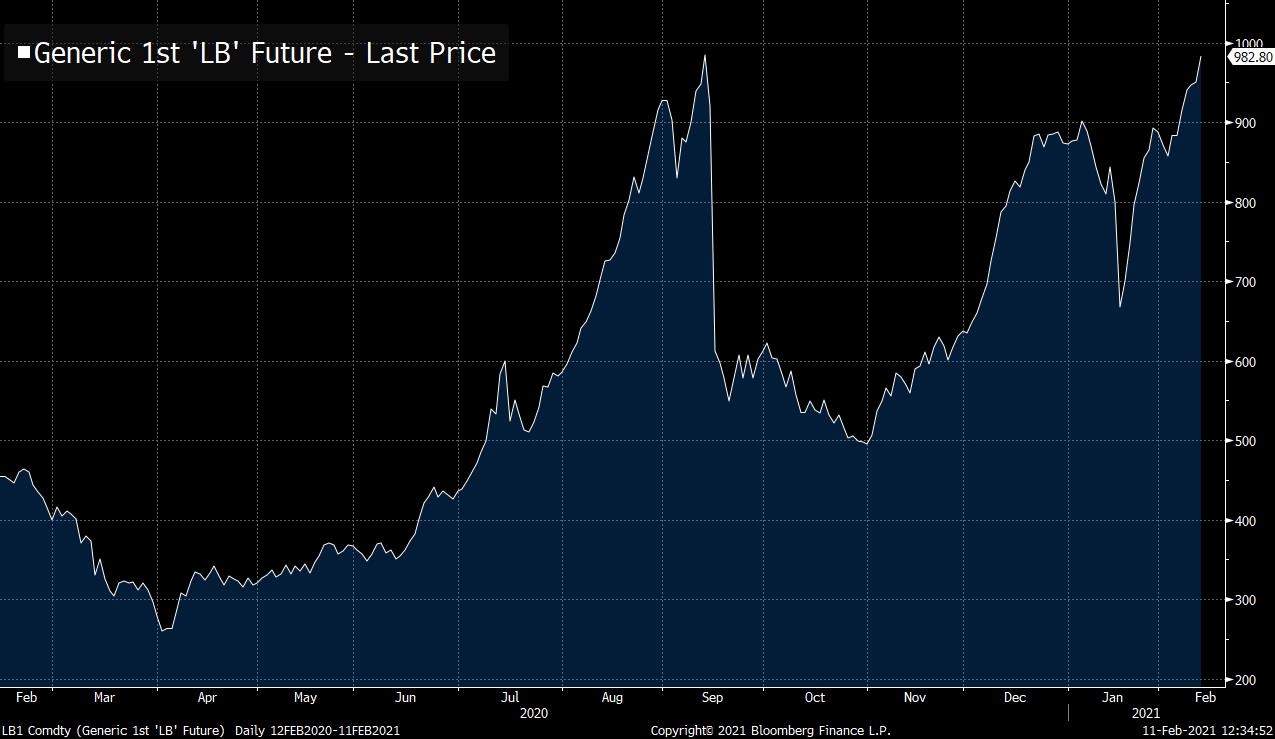 $900 was deemed to be a crazy price and yet the price soared thereafter. After a strong correction, the price came back down to $900. The violent corrections are rapidly bringing about situations of overselling and attracting new investors. 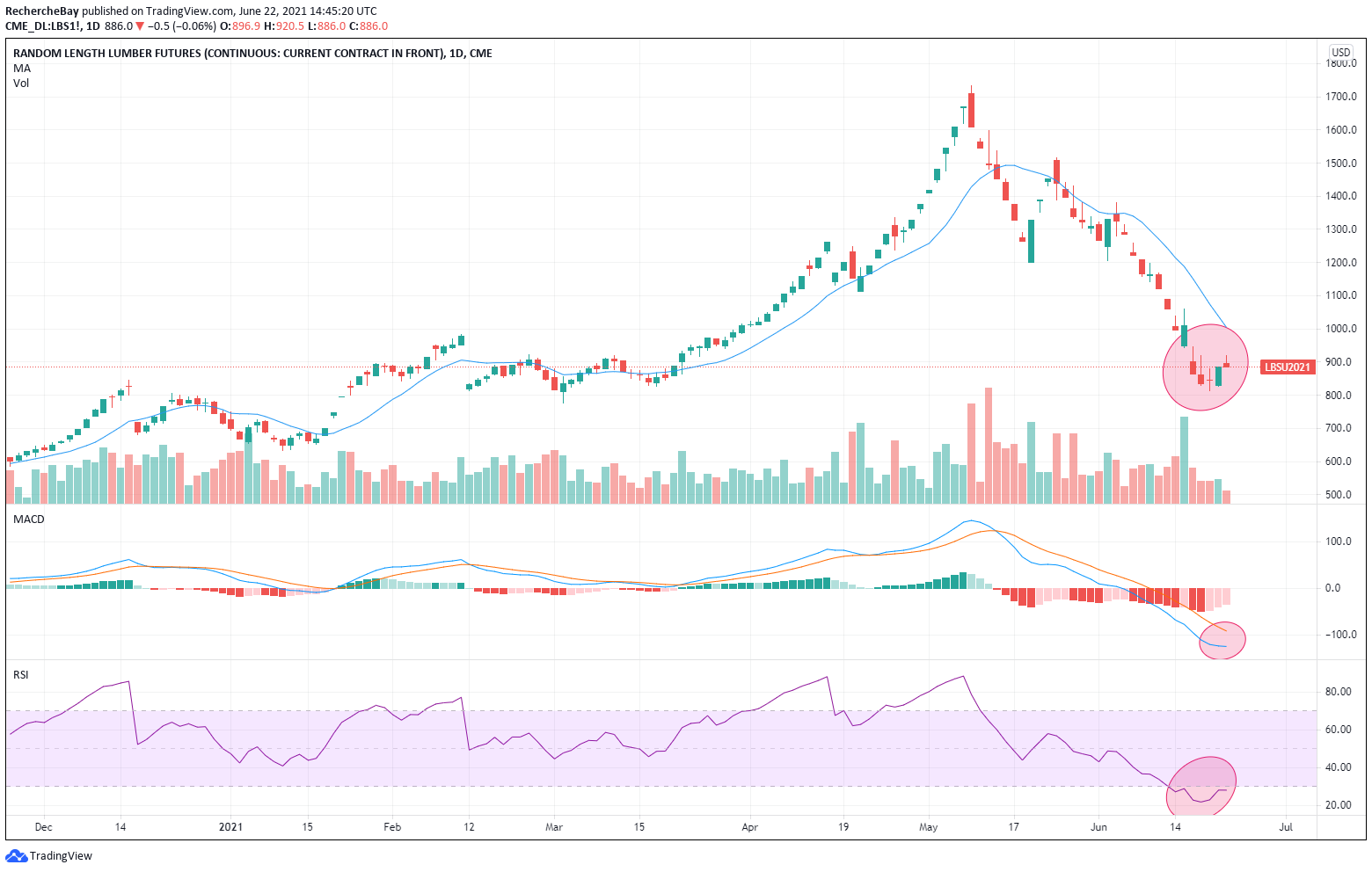 The more the markets are manipulated downwards, the more violent the corrections, and they quickly lead to overselling situations...which, in turn, attract new investors who understand that inflation is not a phenomenon that can stop at the drop of a hat, without significant action being taken on the rates on the part of the monetary authorities.

The use of a sales algorithm on the futures market is effective in the short term...

According to Chris Powell of the GATA, this type of algorithm is currently responsible for the correction to gold. The U.S. government and the U.S. central bank are openly maneuvering to keep the gold price down. This “anti-dollar” asset was, up till now, controlled in a subtle way, but now, the suppression of the price is taking place in broad daylight. Chris Powell sees this as a clear sign of the endgame in regard to controlling the price of gold.

The consequence of this violent and rapid correction to commodities, for the dollar, is already very appreciable. The $DXY index, which measures the variation of the U.S. currency, has certainly gone back up...but the index is already very much in oversold territory. The dollar is as oversold as it was during the collapse of the markets in March 2020! 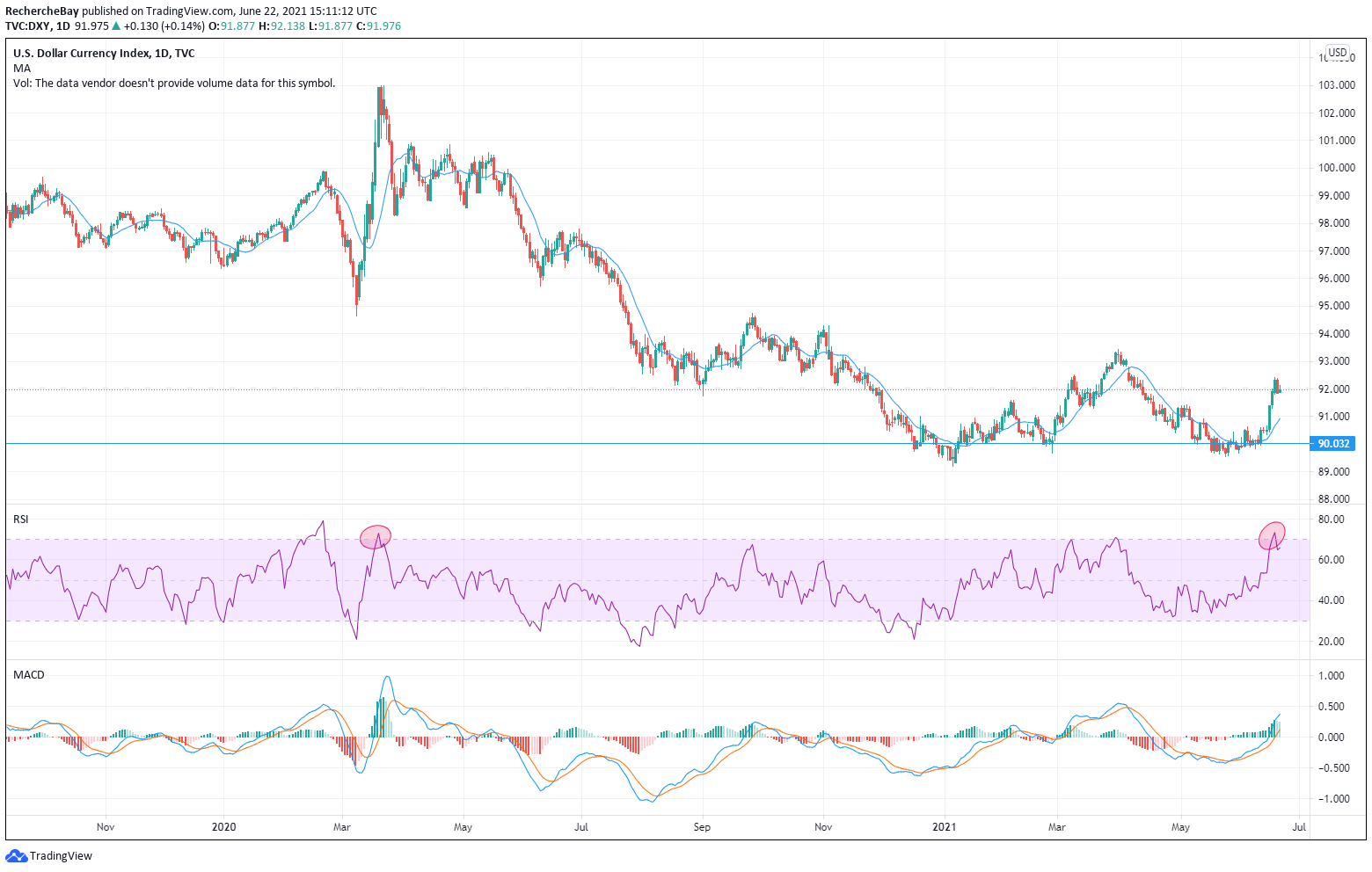 The demand for dollars ought to have been greater, faced with the deleveraging that has been taking place on commodities. But this is not the case.

The sales algorithms on futures contracts for commodities are bringing in far fewer investors on the dollar than during the previous corrections. These algorithms function well when confidence in the U.S. currency is at its highest, but the effect seems to fade away as this confidence is eroded. And therein lies the problem: the loss of confidence in the fiduciary currency is the real driver of inflation. The tools currently being used to combat inflation are less and less effective and, on the contrary, they are feeding the next price rises.

This phenomenon is occurring at a time when the markets are no longer managing to rise. The stock exchange is no longer managing to capture enough of the flow of money created by the central banks. We are approaching a state of indigestion, the margin levels are at their highest and the stock-market capitalization has never been as large in relation to GDP.

The markets are hardly rising at all now, despite the efforts of the institutional investors to bring the latest private individuals into the game.

Microsoft stock received a record 100% of recommendations to buy on the part of all analysts. A record!

And while these analysts are pushing the retail onto technological stocks, the funds are withdrawing from the sector in brutal fashion: 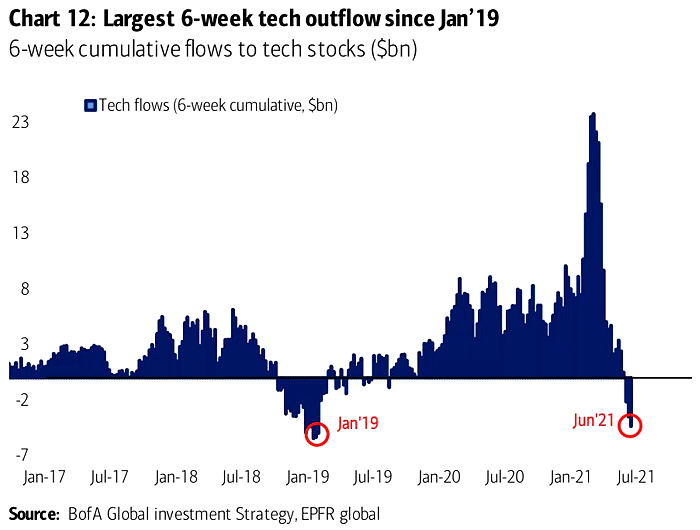 The insiders are selling at a record rate, too. Mark Zuckerberg has accelerated his daily sales of Facebook stock to $25 million since the start of the month:

Cash and short maturity bonds are the favored instruments of these investors who are liquidating their stock. The bubbles created by the Fed are now transferring towards cash positions.

The banks find themselves atop mountains of cash, despite themselves. Their customers’ demand in terms of borrowing is not following the rise in customers’ deposits. Consequently, these same banks are sinking under the cash accumulated by their customers (these are charges for these banks), but the demand for loans is not following this rise. This movement is resulting in a deterioration of the banks’ balance sheets: 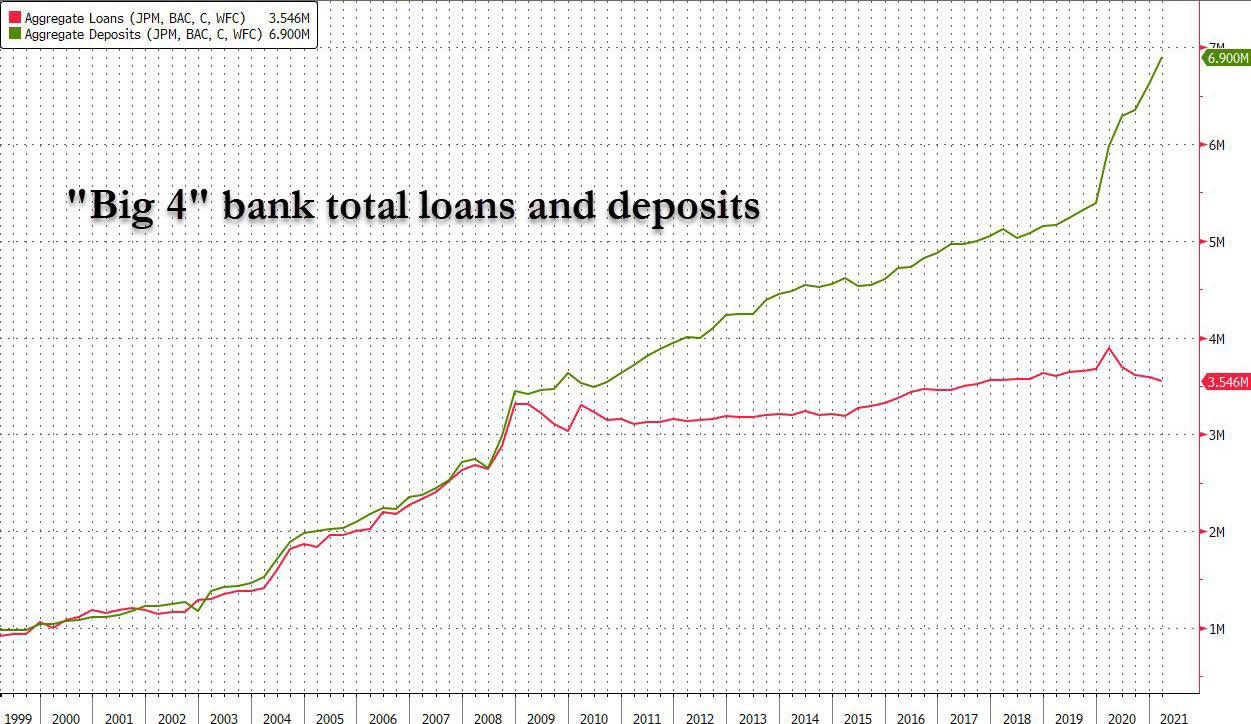 To limit their losses, the banks are encouraging their customers to invest their cash in short maturity U.S. bonds, the famous T-Bills. This is an unexpected consequence of the Fed’s interventions: the demand for short-term bonds is a genuine concern. It has prompted the Fed to launch a plan for the exchange of cash against short maturity bonds, to avoid a situation whereby the short maturity rates rise and to alleviate this high demand for T-Bills. The Fed does indeed have a fairly sizeable number of short maturity bonds on its balance sheet, which it purchased during its previous rounds of Quantitative Easing. It is currently exchanging these bonds for cash. This is also making it possible to alleviate the bond funds (Money Market funds), which are also starting to suffer due to this shortage of short maturity bonds. The banks and the bond funds are given respite, and the short maturity rates do not increase; problem solved. The intensity of this program, dubbed “Reverse Repo”, has surprised plenty of observers, however. In barely a few days, the amounts exchanged have already exceeded $750 billion. 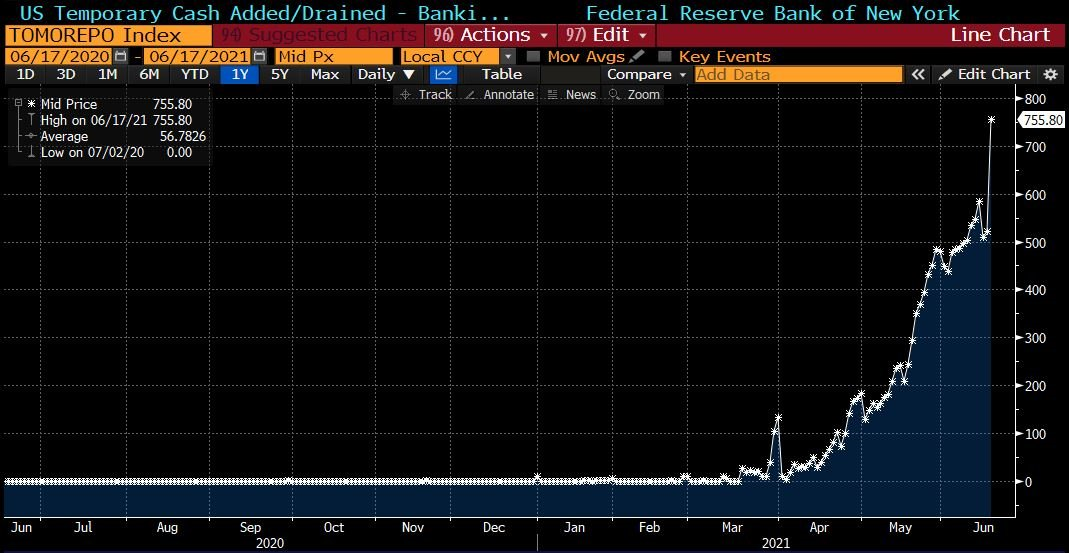 In other words, this famous Reverse Repo program has reached, in just a few days, the equivalent of the GDP of the world’s 20 biggest economies. It is a very visible sign of the enormity of the financial bubble that the Fed must manage as best it can, by avoiding, at all costs, a situation whereby this liquidity bubble fuels real inflation. In the space of a year, the Fed has printed almost $4 trillion. As for the U.S. debt, it has swollen by almost $5 trillion. 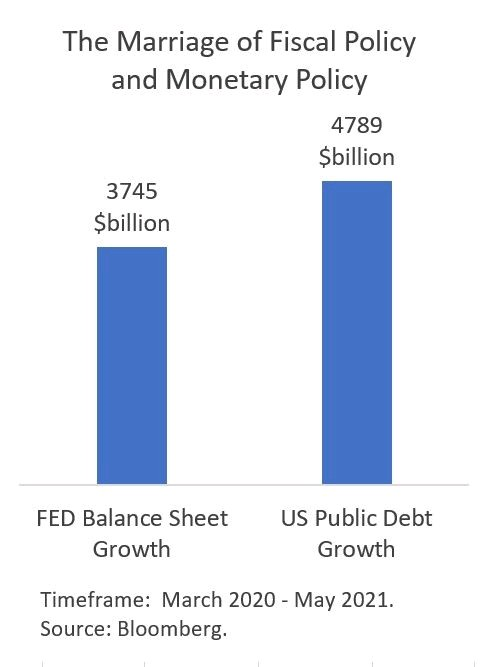 The risk for the central banks is that they will now see bubbles that are “too big to fail”, and this will logically give rise to even more outlandish inflation.

The task is made even more complicated by the fact that this inflation has already begun to rear its ugly head to a large extent in the United States.

The latest figures on the prices paid by consumers confirm that the figures are taking off: 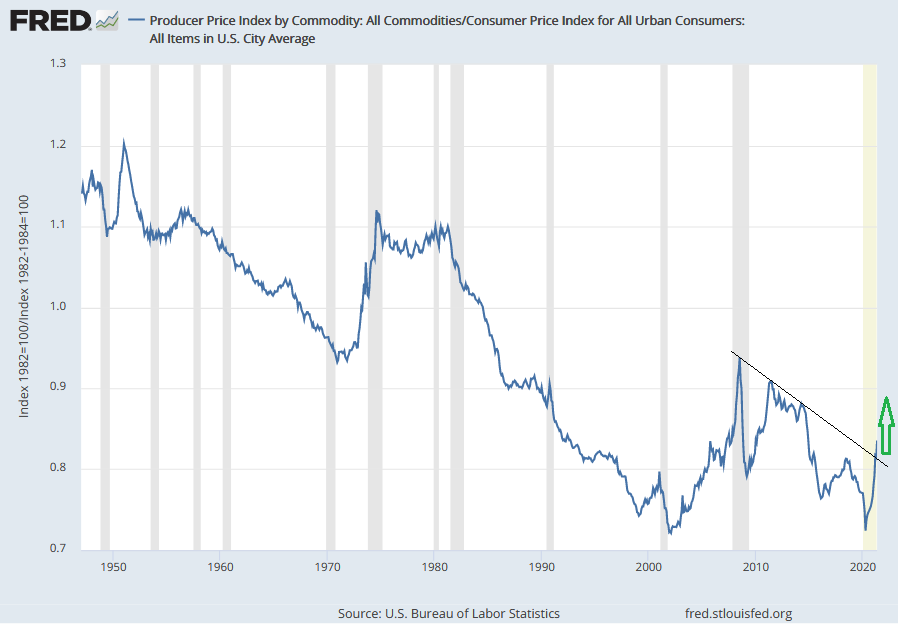 In the United States, the rise in prices is continuing to spread. It is now the real estate market that is reaching a historic high. 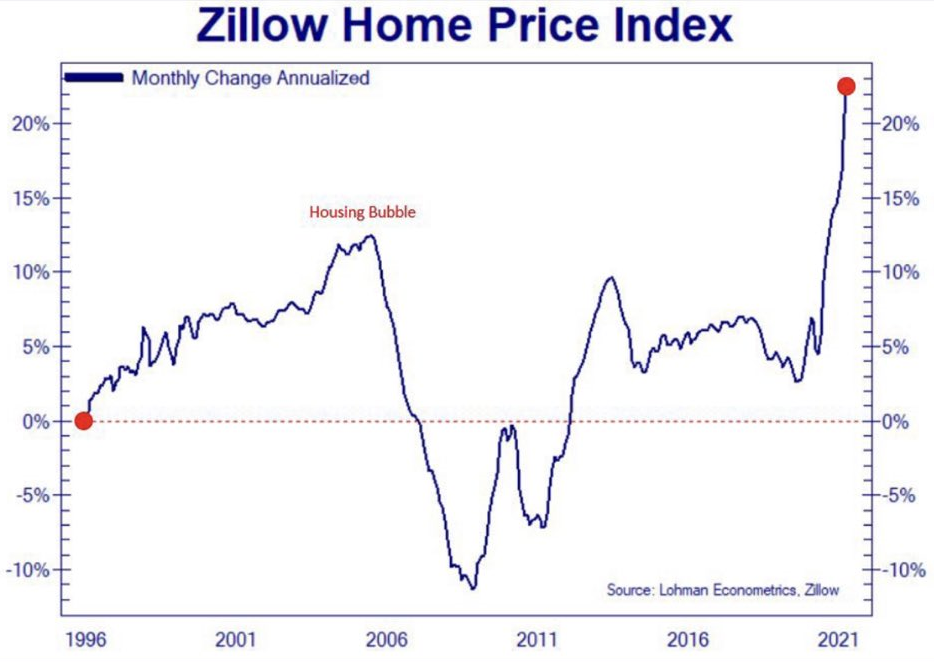 On consumer goods, the trend is even clearer to see. This inflation has already led to shortages of certain products, such as chicken wings... In Canada, people are starting to see the consequences of this inflation directly, in spectacular fashion: 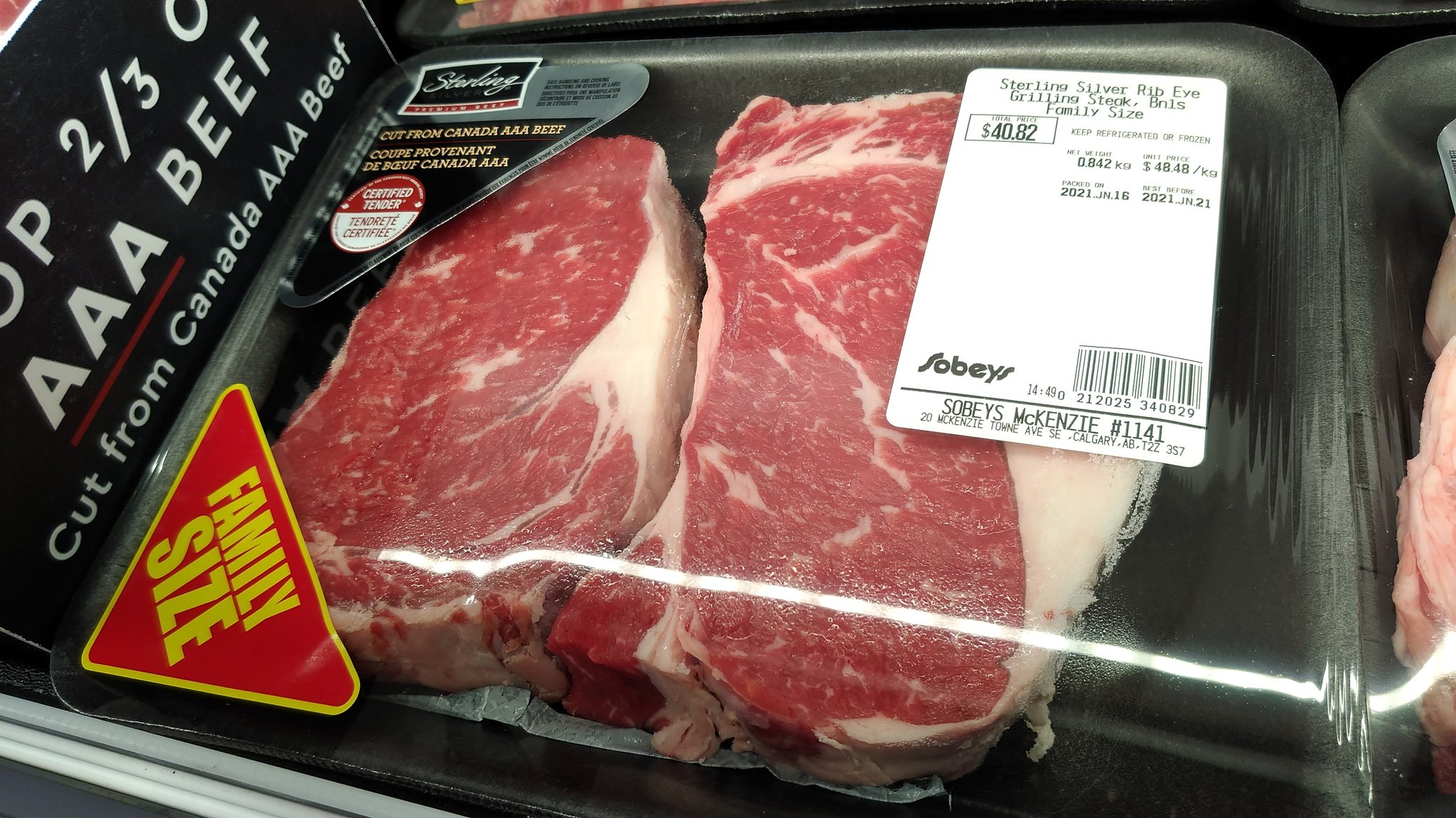 This rise in prices is being encouraged by a backdrop of strong reflation of the U.S. economy. GDP has returned to, and surpassed, its pre-crisis levels: 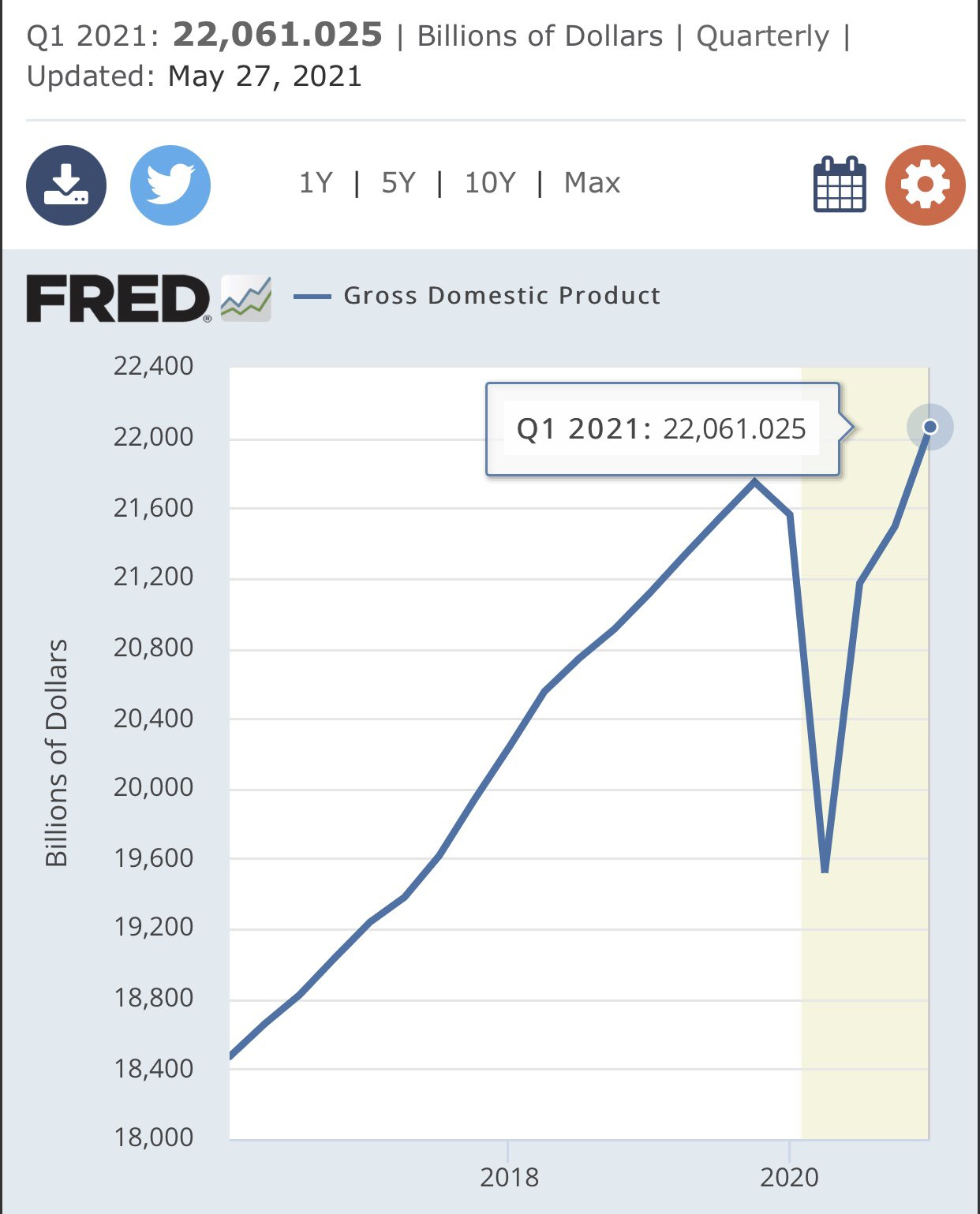 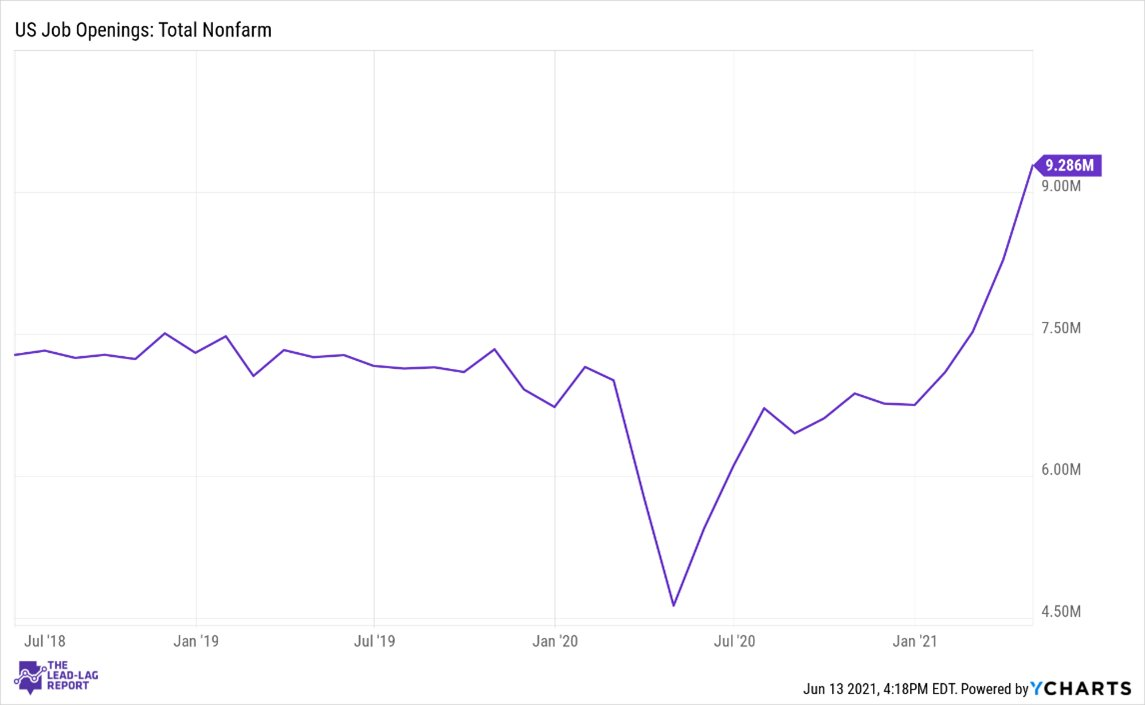 We are seeing the flourishing of perks on first jobs here and there, something not seen for at least 30 years: 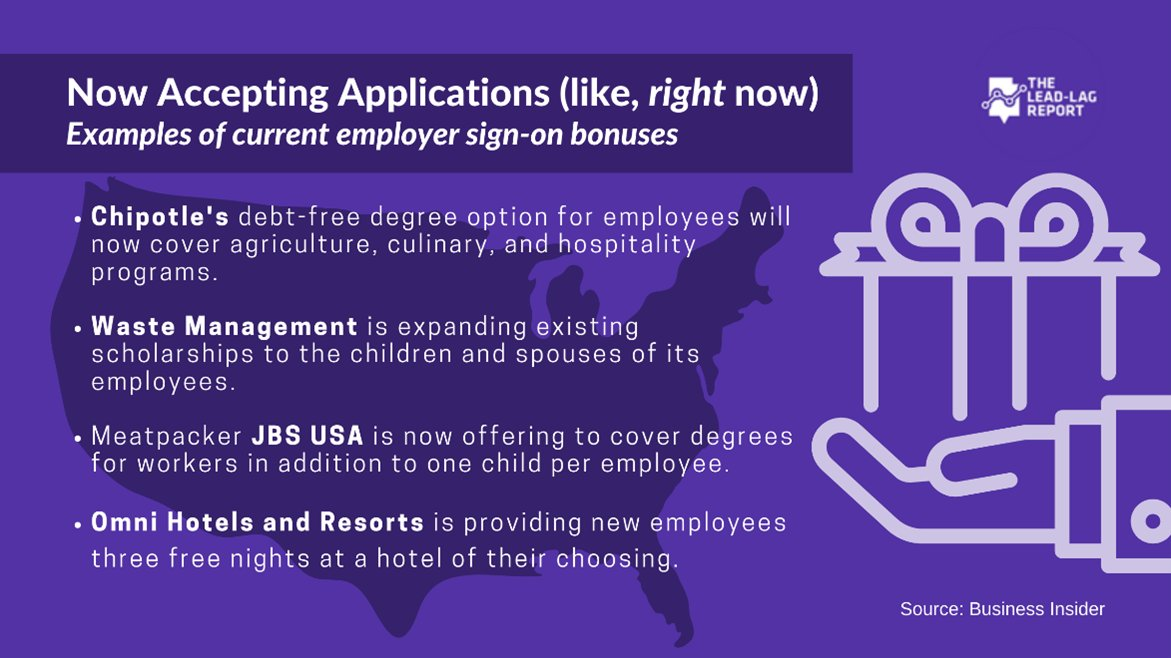 The inventories to sales ratio is at an all-time low. This chart ought to be sufficient to frighten those who are in the process of talking about reflation in the United States: 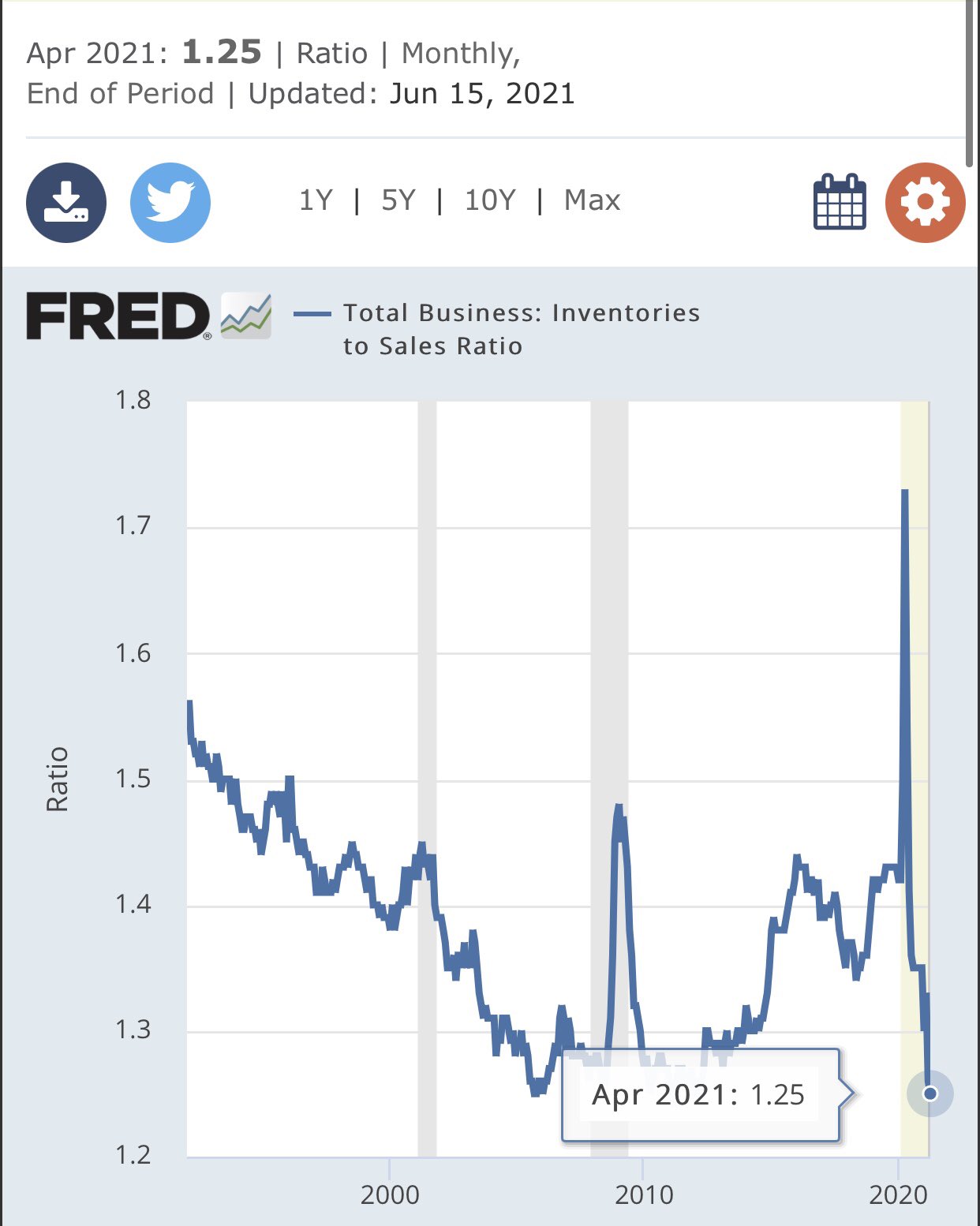 But the primary driver of inflation will not only be found in this violent change to the economic situation in the United States.

James Bullard knows full well that this inflation will not come from an economy that is performing better than expected, but rather from an inability on the part of the Fed to burst the financial bubble on time, but also from investors’ lack of confidence in the Fed’s ability to juggle this new inflationary challenge, leaving this financial bubble to fuel certain tangible assets in too brutal a fashion.

Those who, like China, are placing orders today on tangible assets, have understood this well.