You probably don't know Zoltan Pozsar. A young financial prodigy, who was recruited out of university by the Federal Reserve of NY. It has become “the” master of what is known as “Shadow banking”, which includes derivatives, which blew up the global financial system in 2007-2008. Despite his young age, he was the adviser to the US Treasury and the Fed in trying to resolve this systemic crisis.

For this brilliant specialist, cutting the Russian Banks from SWIFT is generating a gigantic liquidity crisis like that of the bankruptcy of Lehman.

On Monday, February 28  he wrote, "I’ll never forget the late-night briefing on Friday before Lehman’s bankruptcy where according to one line of argument Lehman’s problems were so widely understood that the system had enough time to hedge itself so that the actual default would be manageable." Everyone knows the rest. The entire global banking system has gone bankrupt and central banks continue to create money in an attempt to plug the financial sinkholes generated that day.

Russian banks and companies had nearly $1 trillion in cash, of which nearly $200 billion was placed on the FOREX Swaps market. These 1000 Md$ missing in the system will generate a liquidity hole for the markets and the 200 Md$ of Swaps will generate an immense disorder on the CDS market, the insurances against the defaults of delivery or payment of one or the other.

Russia in 2019 exported $419 billion and imported $254 billion. If Russia cannot pay for its purchases, it is a huge default, which will affect companies, banks and reinsurers through CDS. If Russia cannot collect payment, they will not send the goods. As Germany cannot deprive itself of Russian gas, oil and coal without risking putting its industry to a standstill and its population in the dark, there have been some sanctions waivers so far. But it is enough to look at the terrible fall in the stock market of the main European banks to understand the importance of the current systemic shock.

On March 3 Zoltan Pozsar wrote that seizing the reserves that Russia held abroad puts the dollar in danger of losing its status as a reserve currency. After having seized the Afghan and Russian reserves, the United States have just sent a message to all the nations of the world. What you have set aside abroad for emergency situations can be seized just when you need it most. For safety, it is therefore necessary to keep its reserves and its wealth at home. The United States may be triggering a bank-run of all nations to repatriate their monetary reserves and gold to their homes.

Speaking of Russia, he would ask the question out loud, "if things get worse, you could basically re-anchor the ruble to a pile of gold because you need an anchor in situations like this. In case Russia wanted to truly extricate itself from the current "dollar reserve" world, it should unveil a gold-backed currency, one which is co-sponsored by the Chinese yuan, which would then also announce unveil it is becoming gold-backed."

It is an analysis that has been found under many feathers, the fact that Zoltan expresses it publicly gives a whole new weight to this possibility.

On march 7, Zoltan published a document, which I consider to be major, and which has supported my research work and my theories since 2009. His article is called “Bretton Woods III”.

By simplifying to the extreme, by blocking all the raw materials of the world's largest exporter, the United States is causing a gigantic liquidity crisis due to margin calls, settlement defaults and delivery defaults. For Zoltan, it is the sum of the 1997 "little Asian dragons" crisis, the default of Russia in 1998 leading to the bankruptcy of LTCM, the subprime crisis of 2007 leading to the bankruptcy of Lehman in 2008, and the 2020 crisis, where closed borders led to delivery failures around the world.

For him, there is not enough liquidity to pay for the margin calls and CDS, which this crisis is triggering.

Always simplifying to the extreme, he sees only one solution : the Chinese Central Bank would have to buy Russian raw materials and store them. To buy, China will have to print money, but its currency will be backed by a huge basket of commodities and will therefore be totally stabilized.

This is the monetary system proposed by Keynes at Bretton Woods and which he called BANCOR.

Zoltan, with great finesse, does not pronounce the word, but it is really obvious, and all the more so since he is talking about Bretton Woods III.

In March 2009, the Governor of China, Xiao Chuan had published an essay: "Reform the international monetary system", which is still online on the BIS website, the central bank of central banks. It is clearly written that the international trading system should not be based on a country's currency, but on a basket of currencies, like the IMF's SDR, but that this basket must be guaranteed by a vast basket of raw materials to give it stability. Keynes in 1944 had proposed a basket of 30 raw materials, obviously weighted according to their rarity.

I have often written about BANCOR, read this article from 2019 "Monetary Reform, SDR And BANCOR".

All this is also in line (a little winding though) with the announcement made by The Economist in 1988 "Get Ready For A World Currency", which specified that it would be around 2018. This currency, the Phoenix, was to rise from the ashes of fiat currencies. The fact that the Phoenix wore a gold coin around its neck suggested that gold would play a very big role. 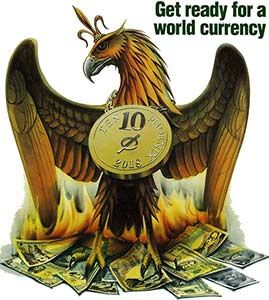 In the body of The Economist's article, it was written that the peoples would use the “Phoenix” in preference to their national currencies, for its stability. This implies that fiduciary currencies must first experience a period of strong instability.

Venezuela, Argentina, Brazil, Mexico, Lebanon, Syria, Iraq, Iran, Turkey, Ukraine, Russia know what monetary instability is. Europe, which has just seen its gas and electricity bills triple, is re-discovering what it is. The price of wheat is soaring, all the world's population will suffer.

By depriving itself of raw materials from Russia, the world's largest exporter, the West is generating very high inflation. The purchasing power of the Euro-Dollar system will continue to fall sharply in the months to come. The more the world monetary system will divide, the more the dollar will lose its value.

What about gold and silver?

At the end of November 2021, in my article "Why the price of silver could soar in 2022", I quote Andrew Maguire, who had just revealed that the Standard Chartered Bank, market-maker of the Comex and the LBMA, had just bought all the production of silver to come until September 2022 from two of its main suppliers. Friday, March 11, Andrew Maguire revealed that these suppliers were Russian. Standard Chartered, in the minutes following its purchase, had hedged its silver by selling it forward on the Comex. For a bank, it is a means of obtaining credit to pay the supplier.

Now that Russian gold and silver bars produced after March 7 are banned in London and New York, Standard Chartered Bank finds itself caught in a naked short squeeze.

The bank must not be the only one in this situation, whether for gold or for silver. However, physical delivery requests have been extremely strong for several weeks, in a market that had already been extremely tight for several months, and even in deficit for at least two years.

It would be healthy for the monetary authorities to make an uncompromising audit of the real stocks of gold and silver did not mortgage several times existing in London and New York. The surprise would be significant.

Either way, after a brief technical consolidation on the upside rallye of the past few weeks, silver should come back to test the resistance around $28, which has been blocking each upside push since August 2020.

The rise of silver had been contained in a very well-marked channel. If the liquidity crisis hits the markets, as announced by Zoltan Pozsar, and if the growing tension on the Exchange for Physical system between New York and London continues, we could have a sharp rise like from May to July 2020. This is what Andrew Maguire expects in the short term. If so, silver could see the start of this long-awaited re-evaluation.

It is extremely surprising that on March 16, there are still 52 Moz of money awaiting delivery at the COMEX, whereas officially, there should be 92 Moz of silver for sale (registered).

Is that the sign that no-one wants to get rid of its physical silver at the actual price as we seem in a pre-war climate?