The traditional monthly meeting of the Fed takes place this week. The last meeting, in June, involved a correction to gold of more than $150 in a few hours. 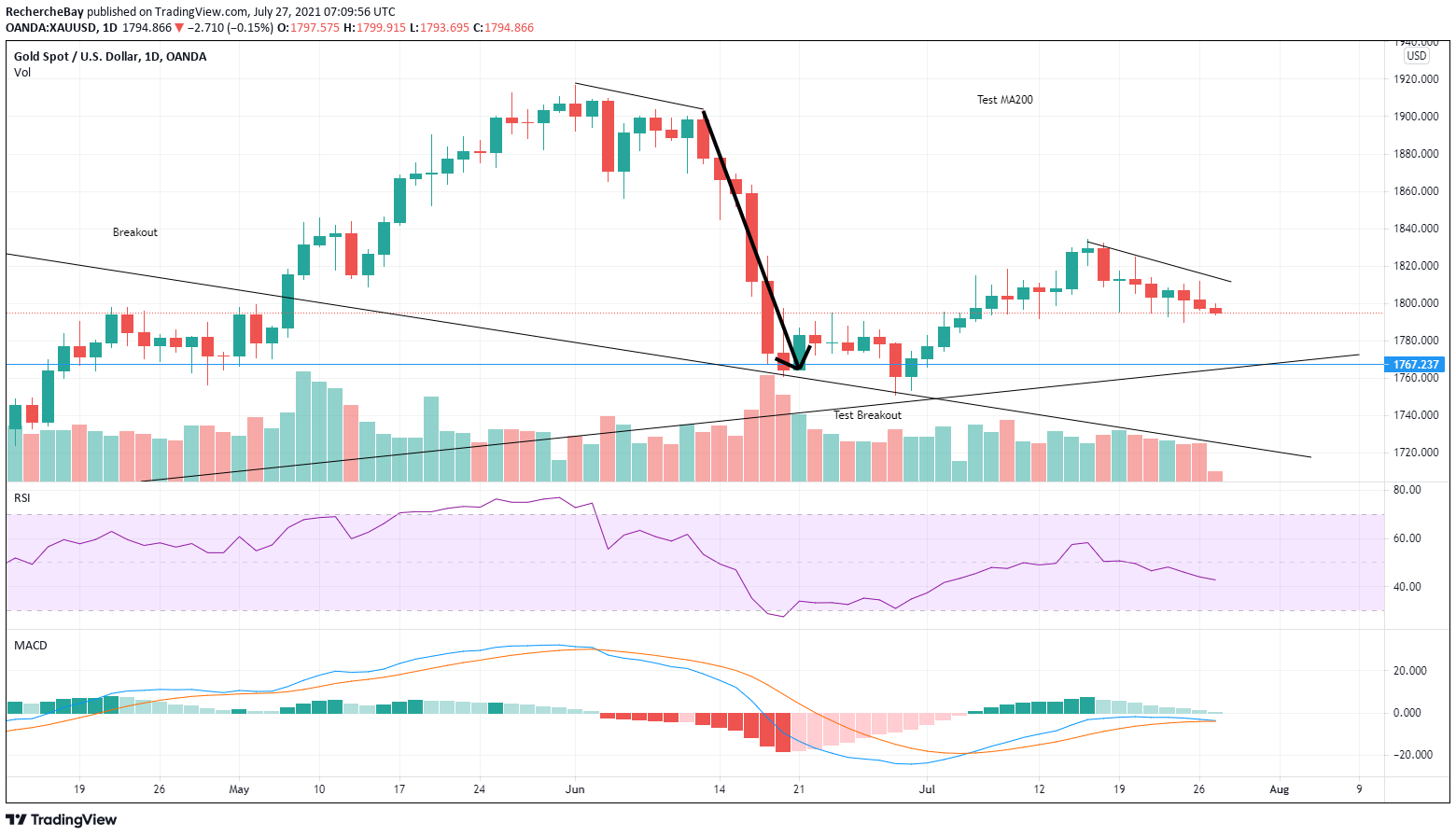 Gold had come back to re-test its consolidation trend, initiated in August 2020. Gold rebounded on that line, but for the last few days, the selling pressure has been increasing (rather like what happened before the last meeting in June).

The bears on gold would like a new mass sale to occur on the occasion of the Fed’s July meeting. Indeed, the support of this fall is situated at around $1700, at a new test of the consolidation line.

It was a hawkish discourse that had triggered the fall in the gold prices in June. If one looks at the details of what the Fed has accomplished since those announcements, however, one notes that its actions run contrary to that discourse. The Fed remains largely dovish, despite its warnings. Since Mr Powell mentioned his plan to scale down the purchasing of bonds (‘tapering’) in June, the Fed has in fact continued with its asset purchasing plan at a brisk pace.

The Fed has even stepped up its purchases of inflation protected securities, those famous TIPS: 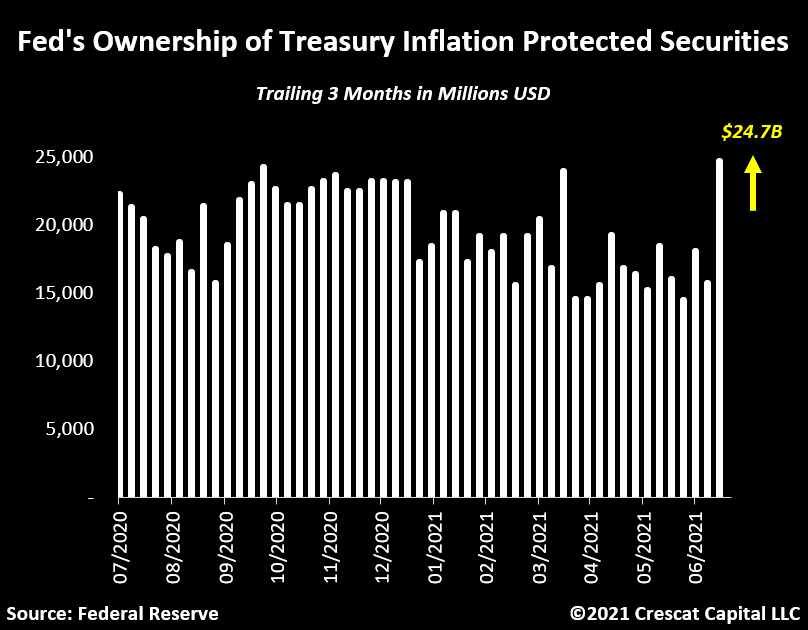 These purchases are one of the tools used by the Fed to control the nefarious effects of inflation.

In Europe, purchases of assets are accelerating as well. The ECB has promised to adopt its PEPP programme at a faster pace, at least until March 2022.

Globally, it can already be said that the yields on government bonds no longer reflect the forecasts for inflation, insofar as the central banks are in the process of swallowing up all the new bond issuances.

These purchases by the central banks are now associated with a fear about growth in the upcoming semesters. The bond yields are therefore starting to come down again. There are now 3.5 trillion more negative-yielding bonds than there were in the month of May. In total, there are more than $16 trillion’s worth of negative-yielding bond products! 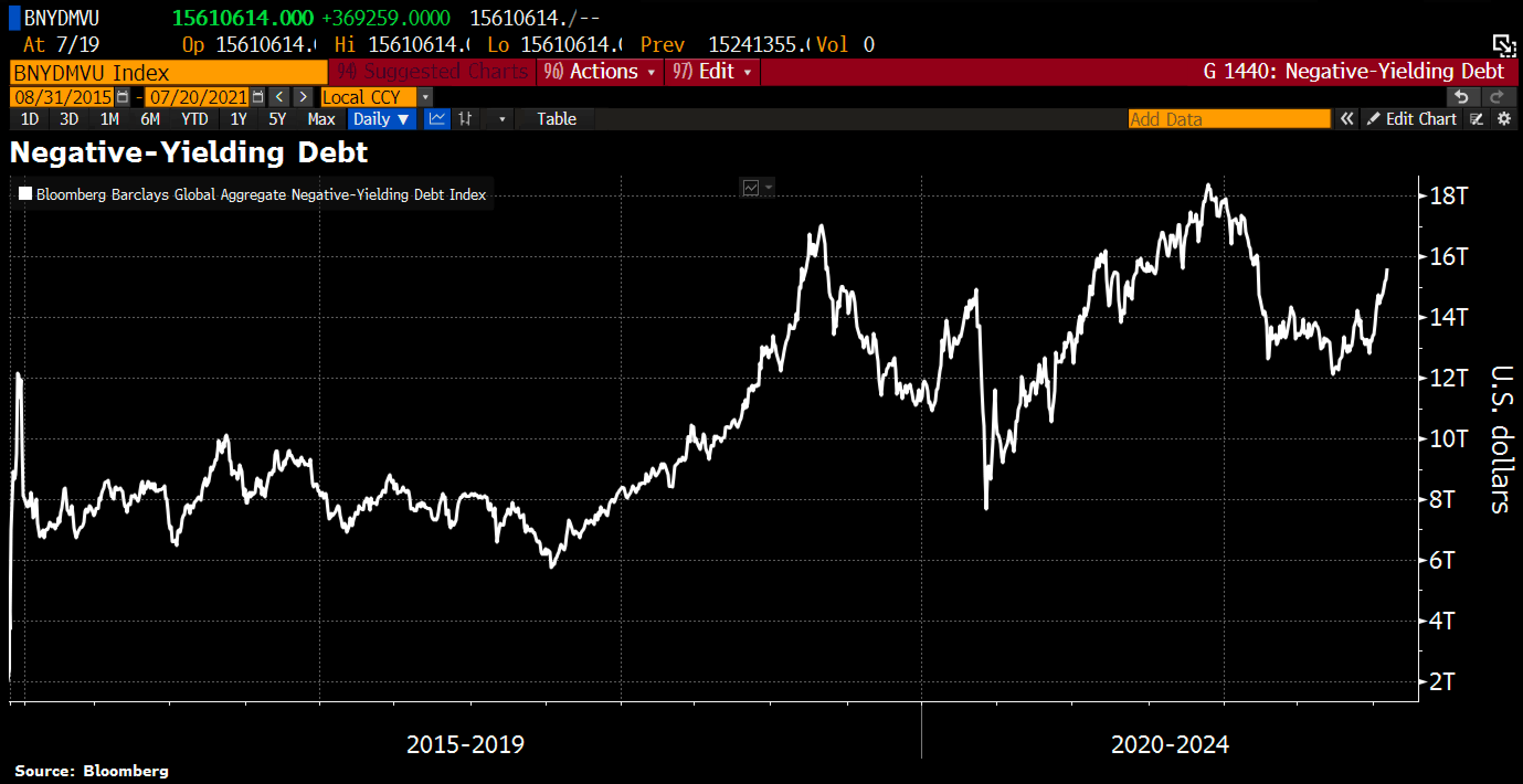 These expectations about sluggish growth are reflected in the stock market results of the Chinese telecoms companies, which have fallen by more than 20% this week.

In the United States, this anticipated economic slow-down is being reflected in the collapse of the demand for loans, whose fall is comparable to the period that preceded the 2008 financial crisis. The difference between the U.S. and Europe is very noticeable, in fact. Never in history has such a big difference in demand for new credit been seen, between a Europe that is getting into debt again...and an America that is stopping all its new loans! 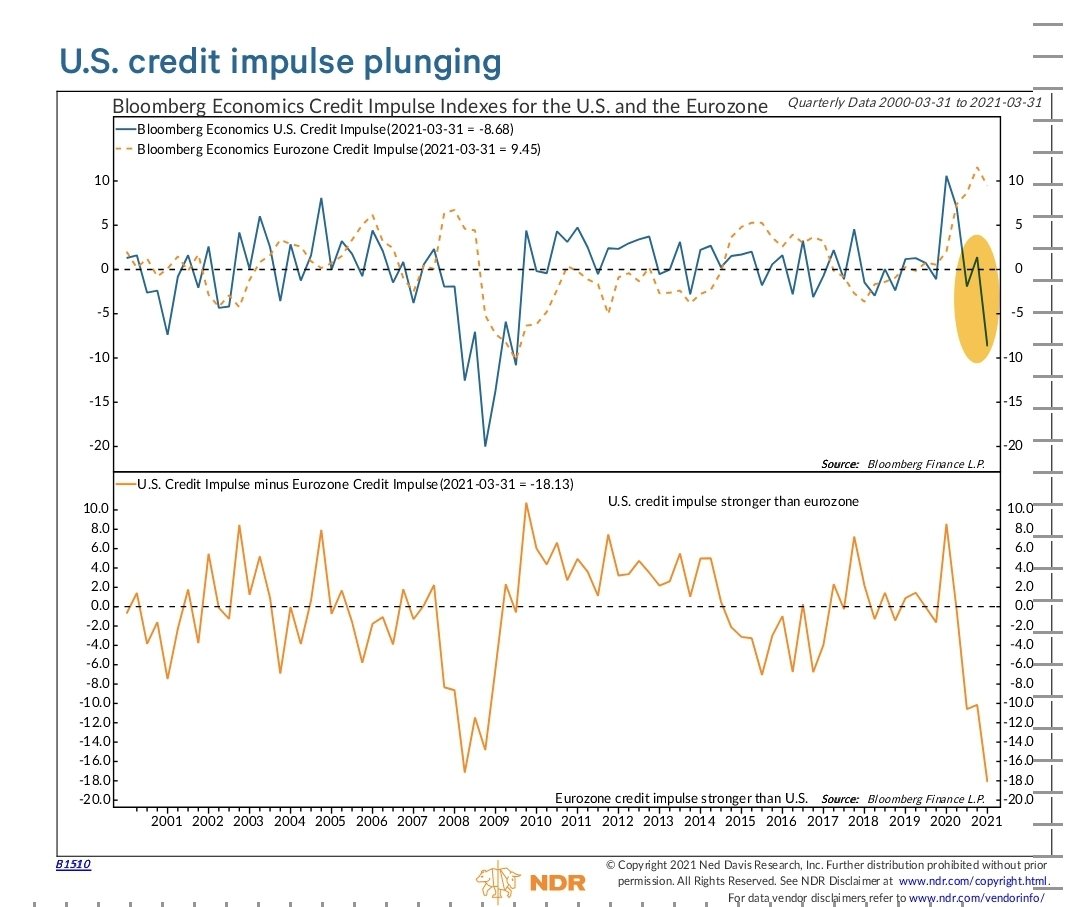 This difference can be put down to the perception of inflation, which is more noticeable for the time being in the United States than in Europe. People are buying less in the United States, because everything has become too expensive! The buying conditions for homes, cars and capital equipment have never been considered as bad as they are now in surveys. 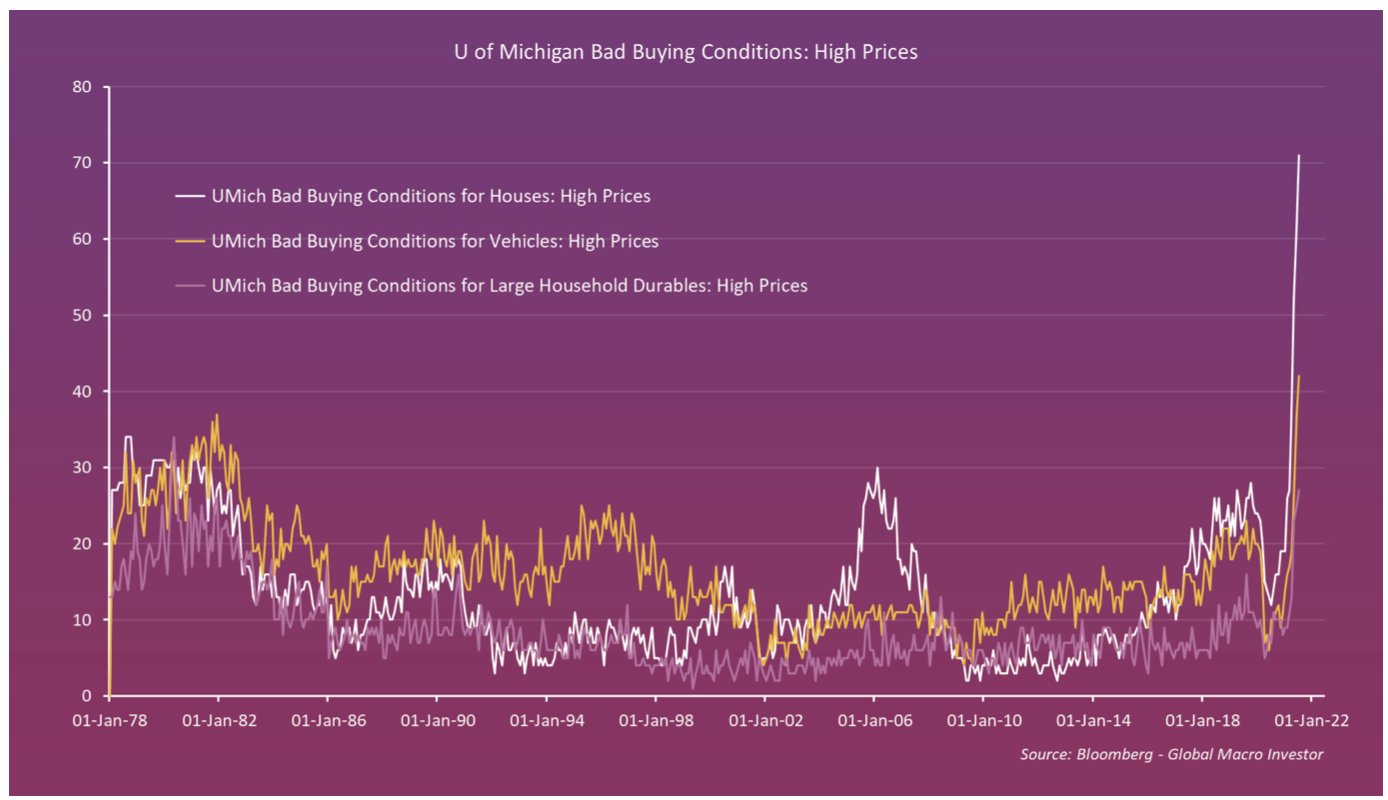 Without an additional intravenous drip, U.S. consumption is at risk of having a heart attack in the short term! The problem is that any new monetary or fiscal intervention risks making this inflation spread even further.

These terms of purchasing have deteriorated precisely because of the spectacular rise in prices that was triggered this year. And this rise is not about to stop.

The inflation is primarily caused by two factors:

1. The printing press is running at full speed. 39% of all the dollars ever created, in history, have been issued in the last twelve months. At an equivalent production capacity, having more money in circulation automatically increases the price of goods. Here, we are in fact seeing a decline in production, and that is the second cause of inflation...

2. The economy is producing far fewer goods than before the sanitary crisis. There is too much money chasing too few manufactured goods. This fall in production is linked to supply shortages of a purely logistical nature, but also to inflation on commodities. The overly violent rise in prices has broken the distribution chain on essential consumer goods.

The inflation that was previously considered transitory is gradually becoming more and more deep-rooted in this self-sustaining cycle:

This week, copper began to go up again, as the market realized that China was not going to put as much metal back on the market as had been hoped. 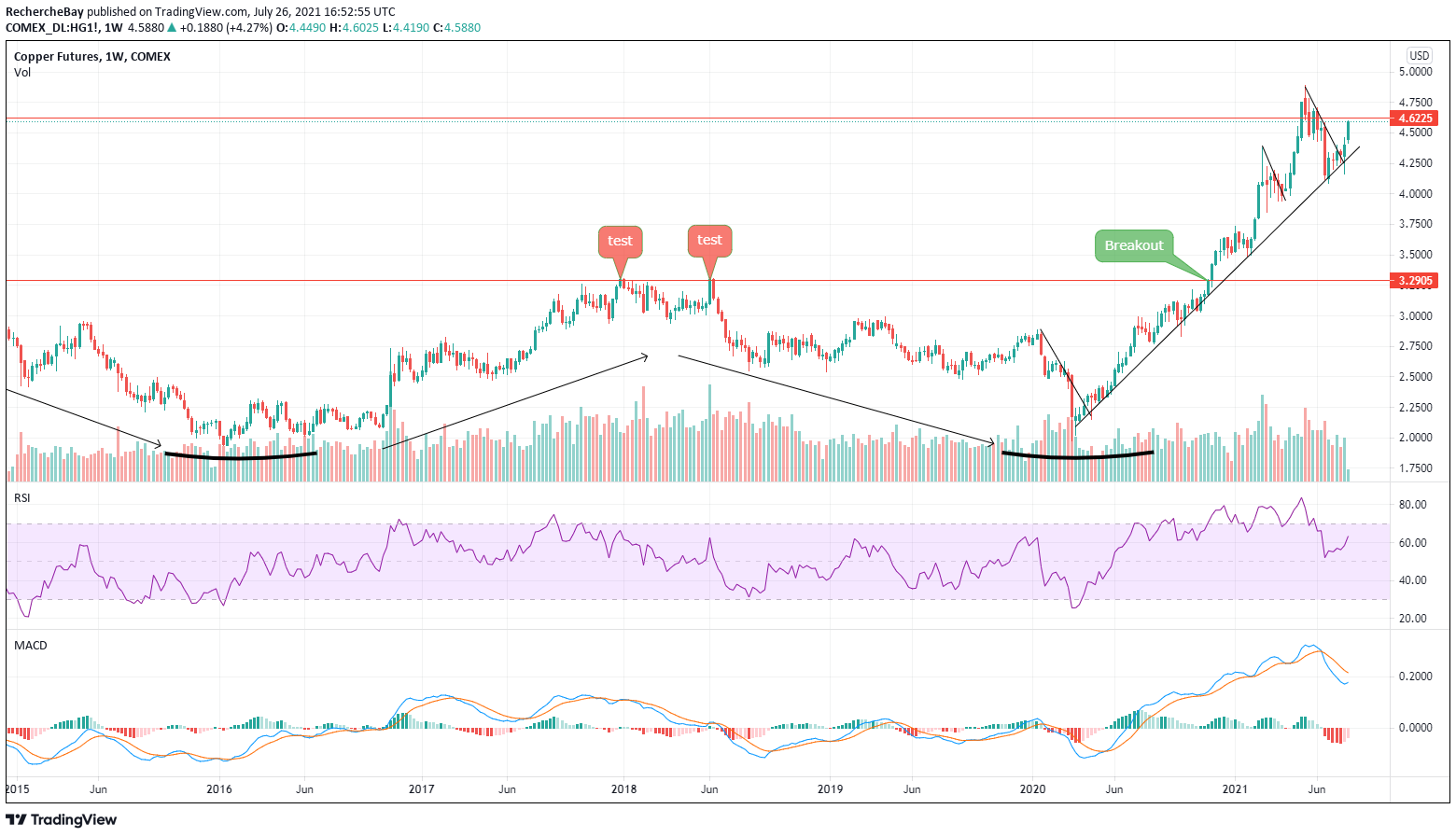 Arabica coffee surged yesterday by more than 8% in a single session in New York.

Coal also started to go up again this week, registering a hike of over 75% since the start of the year. Demand for electricity from the coal-fired power stations has returned to its pre-sanitary crisis levels: 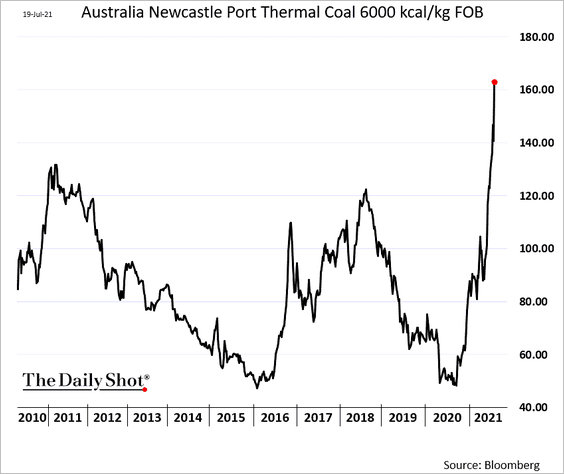 The existing home median price in the U.S. is soaring this week, with an all-time record annual rise of almost 25%: 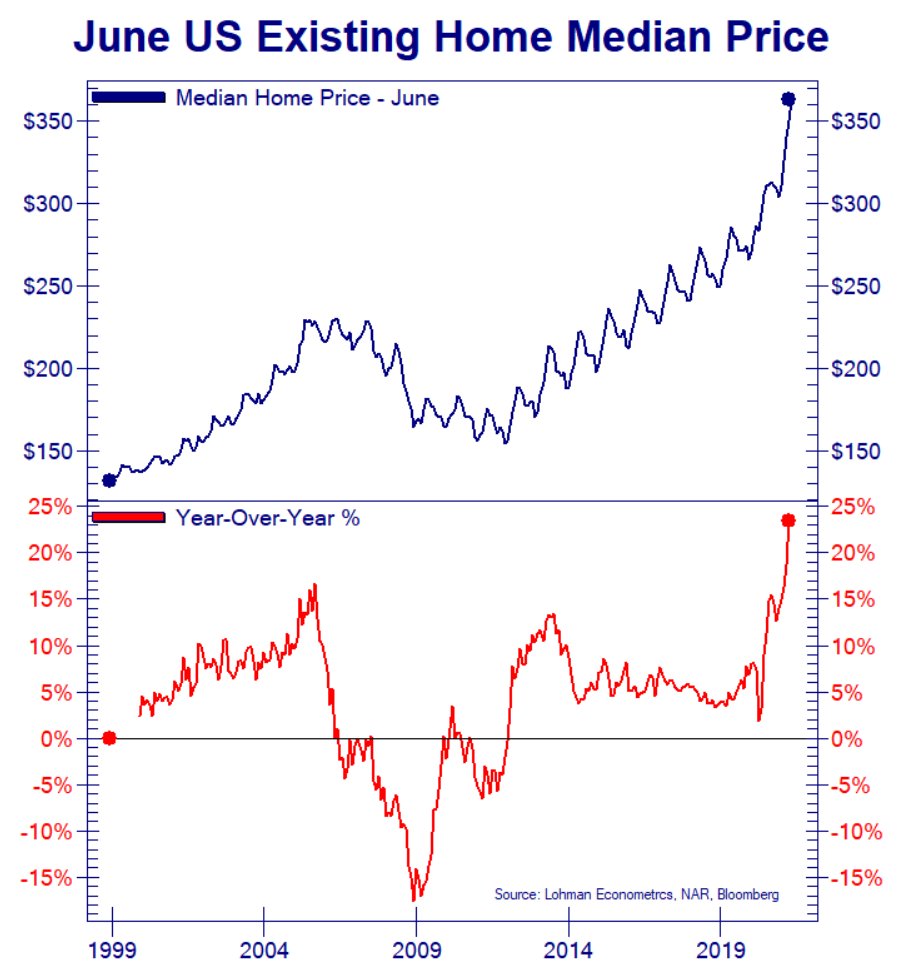 The most spectacular thing about these figures, though, is the origin of these purchases. According to Redfin, 30% of the homes purchased in the United States since January were financed with cash rather than credit. It is the institutions that are now doing the buying, out of a concern to hedge against inflation and because there is a strong need to invest the mountain of liquidity that they have in reserve and that is depreciating before their eyes. The inflation and the fall in the yields are having a devastating effect on cash assets, which have no protection against inflation. This can be measured by the level of real yields, which has fallen to record lows: 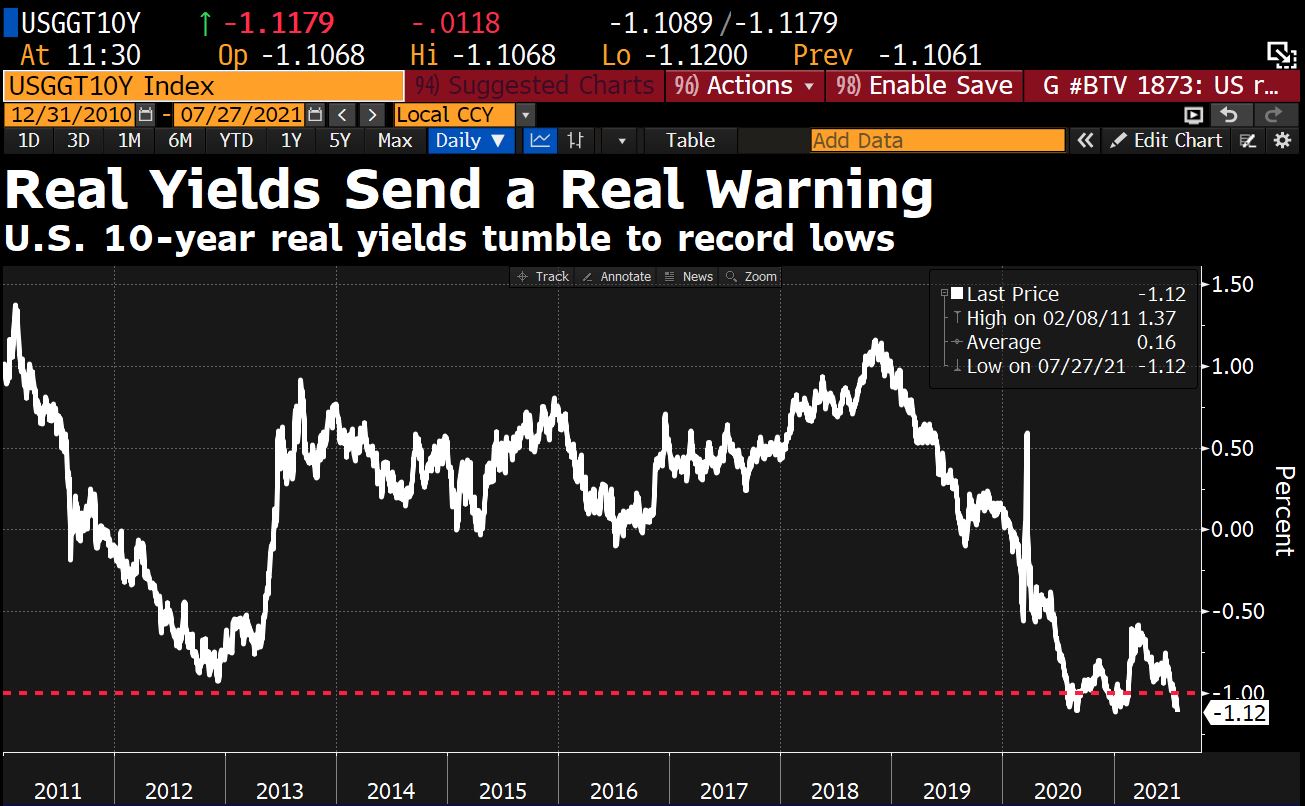 This rush on tangible assets is occurring worldwide.

Housing in the United States...and gold in China. Imports of gold via Hong Kong have risen sharply (+42% in June). China is continuing to take advantage of the fall in the price of gold to free itself of its dollar reserves.

According to a survey by the OMFIF, 20% of the world’s central banks are planning to reduce their dollar holdings between now and next year.

In a period of inflation as intense as this, cash and the safest bonds are no longer bringing anything in, and are in fact costing their holders a fortune. The statements coming out of the Fed are no longer sufficient to stop this realization from dawning on people, so obvious has the situation become. Only a rate hike and an immediate stop to the purchasing of assets by the central banks could alter the current state of affairs and save the value of the currencies issued by said central banks. The Fed does not want to act too abruptly, lest it burst the asset bubble too brutally. The longer it waits, however, the more painful the operation will be.

Time is now the monetary authorities’ enemy, in contrast to the other interventionist phases in which the inflation was under control. The longer these authorities delay acting, the further the rise in prices will spread. And the longer they wait, the more the risk of an urgent intervention to break this uncontrollable cycle increases.

Gold remains the ultimate investment for covering this risk of a loss of control by the central banks in the very complicated task of managing the period to come.