In short: Cooler minds avoid the madness of crowds.

This is true regardless of strategy (growth to value, trend to arbitrage) or asset class (from stocks to bonds, rates to precious metals).

Successful gold investing is no exception to this contrarian pattern of standing apart.

But is this a wise minority?

We have all seen the dispersions cast against precious metal owners as “gold bug” dreamers investing in a “barbarous relic” simply taken from the ground, purchased, and then put back in the ground/vault for a fee.

For decades, the majority of risk asset investors have either ignored or ridiculed buyers of gold and silver.

But here’s the rub: For decades (in fact, for centuries) being in the myopic majority has been a mistake, and this is no less true today when it comes to the topic of precious metals.

HE WHO LAUGHS LAST…

Contrarian investors in gold have in fact been enjoying an undeniable run of price appreciation.

Gold has dramatically outperformed stocks this century, gaining about 555% vs. the 79% gain for the MSCI All-County World Index of stocks or the 146% gains for the S&P.

Those are hardly “barbarous” results.

But informed and far-sighted gold investors (with an eye on wealth preservation and currency hedging) see much further than just price appreciation and a “last laugh” at the expense of their critics.

They are different from the rest. They are, again: Contrarian.

As such, gold owners are prone to feinting the so-called experts, choosing instead to rely upon basic math and history rather than the popular guidance of the “highest offices.”

And what better class of higher-office counterparties can there be than policy makers and politicians who, as history confirms, know almost nothing about, well…the history of money.

TWILIGHT OF THE (FALSE) IDOLS

Ironically, nowhere is this economic ignorance more apparent than among that illustrious class of false idols otherwise known as central bankers, Treasury Secretaries and U.S. Presidents…

Despite some wonderful exceptions (i.e. William Martin and Paul Volker, or Dwight Eisenhower and Harry Truman), the vast majority of fiscal and political leaders do what most holders of political posts do—try to keep their jobs via public bribery and lose money “stimulus.”

Unfortunately, such short-sighted and self-serving strategies have been an over-looked and downplayed disaster for economies and currencies for decades.

When FDR was in a pickle in 1933, for example, he responded to the debt disaster of the roaring 20’s by neutering the nation’s currency via the infamous Thomas Amendment, which devalued the gold content of the dollar yet did nothing to restore economic strength.

When a post-Bretton Woods Nixon later found himself in a similar bind with a gold-backed dollar (whose disciplines meant he couldn’t deficit spend to the moon for easy re-election), he simply welched on the gold standard, the disastrous results of which plague the greenback to this day.

And every U.S. President since, both red or blue, has engaged in continued binges of borrow and spend to stay re-electable as the trusting masses bury their heads in the sand, ignoring the data points below.

But as anyone who has studied the history of our central bank, it’s no secret that this cabal otherwise mis-titled as a Federal Reserve is nothing more than a private banker’s bank.

As such, the Fed serves a Wall Street master not a national currency or economy.

For informed contrarians, this meant bad news for the purchasing power of currencies and good news for stores of actual value—i.e. precious metals.

In short, contrarians need patience and a sense of humor, for the Fed just keeps getting stupider with each new tragi-comedy otherwise known as a financial crisis.

When Greenspan, for example, became the new Fed sheriff in town just as Wall Street’s drunken traders had ushered in a disastrous flash-crash in 1987, what did he do?

Thereafter, Greenspan cut rates to record lows once more, ushering in the perfect set-up for the sub-prime mortgage crisis and market implosion of 2008.

Not surprisingly, the next Fed Sherriff, Ben Bernanke, followed Greenspan’s predictable lead in 2009 by slashing rates to zero and printing trillions out of thin air to buy another “recovery” paid for with fiat dollars and record-breaking debt levels fed by artificially repressed interest rates.

The contrarians, of course, were watching.

Yellen, and thereafter Powell, confirmed the contrarians’ distrust by supplying more low-rate, QE-driven punch for risk-asset bubbles whose distortions are now beyond precedent in the history of capital markets.

Does the consequent market inflation in the S&P emanating from such monetary policy look like a another asset bubble to you? 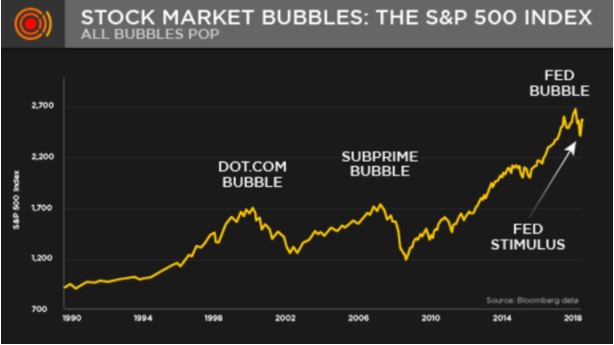 Sadly, the majority of investors ignore these dangers and pack together in an almost blind faith that the experts will save them, because, after all—they’re the experts.

In Japan, just before the Nikkei made its infamous dive in 1989, the most popular expression in Tokyo was: “If we are all crossing the street together, how can we get hurt?”

Such group-think may have been comforting, but what happened next was not.

They all got slaughtered crossing the same street.

Thirty years later, that Nikkei has yet to recover its highs as the Yen’s inherent purchasing power wanes by the second in a nation whose total debt to GDP ratio is over 700%.

The same (and insane) borrow-and-print template, of course, is playing out among all the major central banks and economies of the world.

Artificial markets are rising on debt-rollovers paid for by artificially repressed rates and fake, printed money.

For such “accommodation,” many central bankers, including Bernanke, have gone on book tours congratulating themselves for “saving” the world.

Ah, the ironies do abound.

Contrarian investors, however, have consistently bet against the experts, for as La Rouchefoucauld famously remarked: “The highest offices rarely, if ever, contain the highest minds.”

As someone wandering Harvard Yard when Larry Summer’s was its president, I remember how this former god-father of derivatives de-regulation at the Treasury Department later gutted the endowment of the very university he once led when those same derivatives destroyed the economy in 2008.

In 2008, Hank Paulson was no less self-serving when this former Goldman-CIO-turned-Treasury-Secretary agreed to a TARP bailout that benefited the banks at the expense of the real economy and the purchasing power of the dollar.

Again: So much for trusting the experts.

Their “wisdom” serves as a counter-indicator rather than guiding light for contrarian investors, and thus contrarians, by definition, act contrary to the “experts.”

And just what have the experts and their lose monetary policies given us?

As markets rose on hot air, those same policies lead to unprecedented wealth disparity in the U.S. 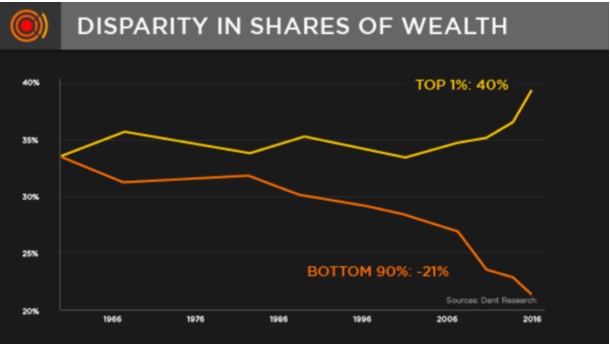 Thousands of families lined up in Dallas on Saturday for a giveaway hosted by the North Texas Food Bank, and the organization called it its largest ever. https://t.co/5B3tXMXLn6

In addition to a rotting Main Street, we now have the greatest global debt levels in the history of the world, tallying in at $277 trillion, representing a 3:1 global debt to ratio.

The IMF’s latest response to this debt crisis? Just add more debt and pay for it with a new global currency.

In the U.S., lose money has sent government debt north of $28 trillion, and combined household, Federal and corporate debt past $80 trillion.

Meanwhile, lose money handed down by Presidents, Treasury Secretaries and Fed Chairs have given us a stock market with PE multiples north of 28 and a bond market so thoroughly overbought and distorted by “accommodation” (i.e. front-running) that inflation-adjusted yields are now negative for the first time in U.S. and global history.

Again, central banks elsewhere have been no less, well, stupid, which helps explain why government bonds in Europe and Asia are offered with negative yields, which by definition, makes them defaulting bonds.

Now, China and the UK have joined the global club of negative yielding debt.

…and insane levels of fake, paper money creation to pay for those debts goes this way… 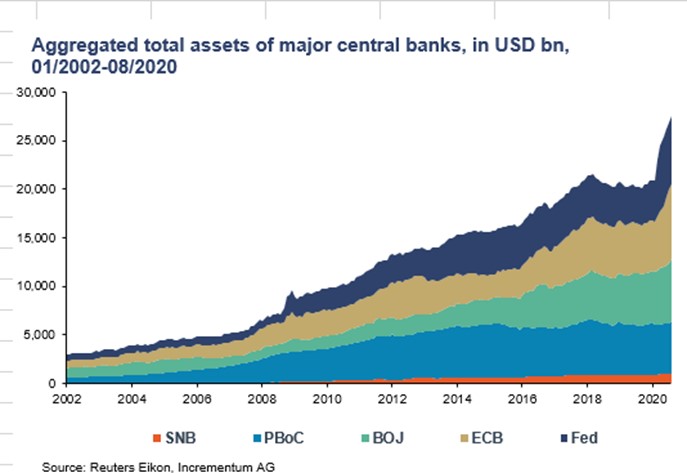 …it comes as no surprise that when measured against gold, the purchasing power of the major currencies has gone this way… 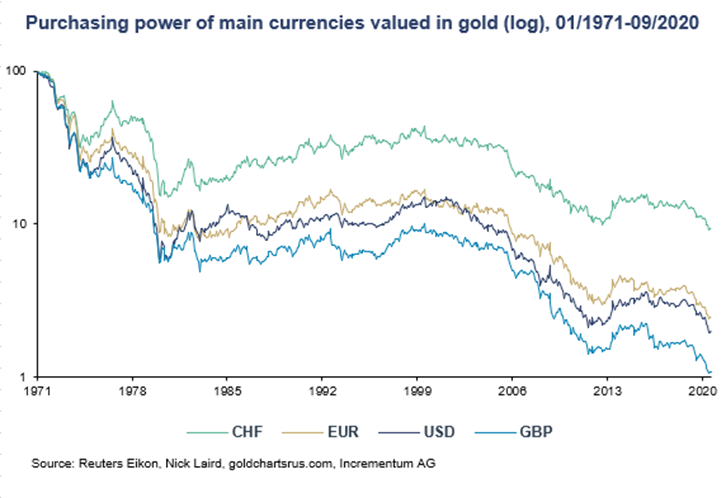 So, do you still feel the experts have your (and your currency’s) back, or is it time to be contrarian and consider gold rather than “expert guidance”?