Before discussing the "imminent" revaluation of physical gold, let's retrace the monetary role of the gold metal in recent history.

Gold and the BIS

At the end of the First World War, the governments of the time were working to balance the accounts of the Nation.

In 1944, in Bretton Woods, international negotiations took place to reorganize the monetary system. The dollar was officially crowned the world's reserve currency and its price was fixed at the rate of $35 per ounce of gold. If a nation had a trade surplus and accumulated a surplus of dollars, it could exchange them for gold to enrich the national Treasury.

In the early 1960s, some financiers began to get annoyed by the repeated US budget deficits. This triggered the start of speculation playing the rise of gold against the dollar. So much so that, at the request of the United States, an association of central banks was created, the "London Gold Pool », to try to control the relative price of gold and the dollar, by selling gold, under the governance of the Bank for International Settlements (BIS). But when France withdrew its confidence and exchanged its surplus of dollars for gold, while leaving the London Gold Pool, speculation increased. Although the US Treasury sold huge quantities of gold by establishing a veritable airlift between Fort Knox and the London market, the game was lost when the Bank of England devalued the Pound Sterling by 14.3% on September 18 1967.

The US Treasury had to concede its defeat and let gold soar, and thus the dollar depreciate.

In August 1971, President Nixon announced to the world that he was ending the Bretton Woods Agreement. Officially, there was no longer enough gold to back the money supply. Gold continued to rise until it was worth $850 an ounce in January 1980.

In 1974, the ban on owning gold for American citizens was lifted and the Chicago Mercantile Exchange launched the "Gold Futures Exchange" on the COMEX in New York: a market for buying and selling futures contracts on gold, regulated by a dozen approved banks, called bullion banks. According to Peter Hambro, who was successively president of two of them, this gold futures market was one of the means created by the monetary authorities to regulate the price of gold, or even to manipulate it. (Source: Reaction.life)

That same year, 1974, the bankruptcy of the German bank Herstatt Bank triggered an international banking crisis. In an attempt to prevent this type of event from happening again in the future, the governors of the G10 central banks created the "Basel Committee for Banking Supervision", whose headquarters are at the BIS, of course. This is how the Basel Accords were born in 1988, which were followed by Basel II in 2004 and then Basel III, which set standards and rules aimed at preventing bank failures.

It should be remembered that European monetary integration took place in stages.

In 1979, the European Monetary System (EMS) was launched to limit the fluctuations between the different European currencies (Franc, Mark, Lira, Peseta, …), thus restricting the freedom of governments to devalue their currency according to their own national economic situation.

In December 1991, the countries of the European Union signed the Maastricht Treaty to implement the Monetary Union.

In January 1999, this Union became a reality: the euro was created. But initially, this only concerned central banks. It was not until January 1, 2002, that the euro became a circulating currency for the peoples of Europe.

If I mention it, it is to better explain the chart below, which shows some vagueness in the policies of central banks about gold from 1971 to 1991. This chart would be even more disordered if it showed the policies of each European nation.

From 1991, there was unanimity among central banks to sell gold, considered an old useless barbaric relic, in order to better defend fiduciary money. Advised in particular by the men of Goldman Sachs, the European central banks will lease their gold to the bullion banks, which will trade it « short » on the markets to better defend the dollar.

LTCM, the largest hedge fund of the 1990s, will thus sell the gold of the Italian Treasury, convinced of its future decline in price. But Russia's default on its debt triggered a rise in gold and nearly bankrupted LTCM on September 23, 1998, causing a major systemic crisis.

A few months later, on May 7, 1999, Chancellor of the Exchequer Gordon Brown's announcement to sell 415 tons of gold, more than half of the Bank of England's gold reserves, can only be explained as a maneuver to lower prices, thus making it possible to save the banks which had replaced the obligations of LTCM. The price of gold then plunged to $254 an ounce, its lowest since 1980. 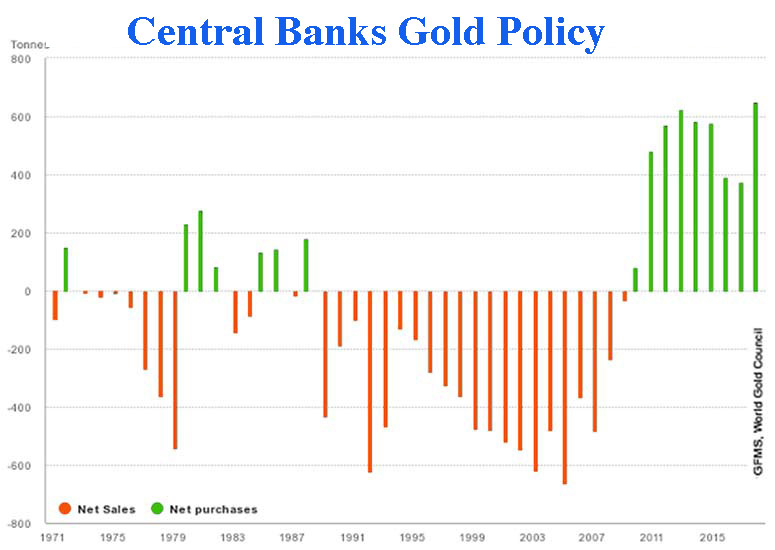 On 26 September 1999, under the aegis of the IMF (and most probably the BIS), a private agreement was signed between the 11 European central banks and those of Sweden, Switzerland and the United Kingdom-United Kingdom confirming that gold remained an important element of monetary stability and limiting gold sales to 400 tons per year for the next five years. The agreement was renewed in 2004 and even in 2009, even though the monetary policy of these central banks was completely reversed at that time.

At the heart of the 2008 systemic crisis, during the G20 in November 2008 in Washington DC, many leaders of the represented nations called for a change in the international monetary system. This was formulated very clearly by China in a document (still online on the BIS website) demanding the abandonment of the dollar and deploring that the system proposed by Keynes in 1944, the Bancor, has not yet been tested.

In any case, as of 2009, the policy of the central banks took a 180° turn. Instead of leasing or selling their gold, all the central banks are going to start buying it, on the one hand, and trying to recover the national gold, which was leased to bullion banks, on the other hand. But these leasings were made with long-term contracts and bullion banks played this gold on the markets; so it had been sold several times.

To accentuate this mess, as of August 2009, China encouraged its citizens to invest in gold and silver and became a very large physical gold buyer in the London market. Beijing took delivery of the metal, then had it recast in Switzerland into one-kilo bars, before shipping it to China. The numbered bars from the various National Treasures have thus lost their original identity and were no longer recoverable by the different nations, which had recklessly leased them to bullion banks.

When in 2013, Germany wanted to repatriate 300 tons of gold entrusted to the New York Fed, the Fed asked for a delay of 7 years to re-ship them. Upon receipt of the gold, the bars did not match the initial list assigned to the Fed and had to be further refined to obtain pure gold that met international standards.

On the same date, the Netherlands also requested the repatriation of 120 tons of their national gold, followed by Austria and some leading central banks.

It was the BIS that was charged with unravelling the inextricable tangle of leasing contracts and successive mortgages on the same bars initially generated by central banks and then by bullion banks, whether in London or New York. To get an idea of the scope of this work, these are the contracts that the BIS has had to close in March alone since 2010:

And now, look at the contracts settled for the last 3 years: 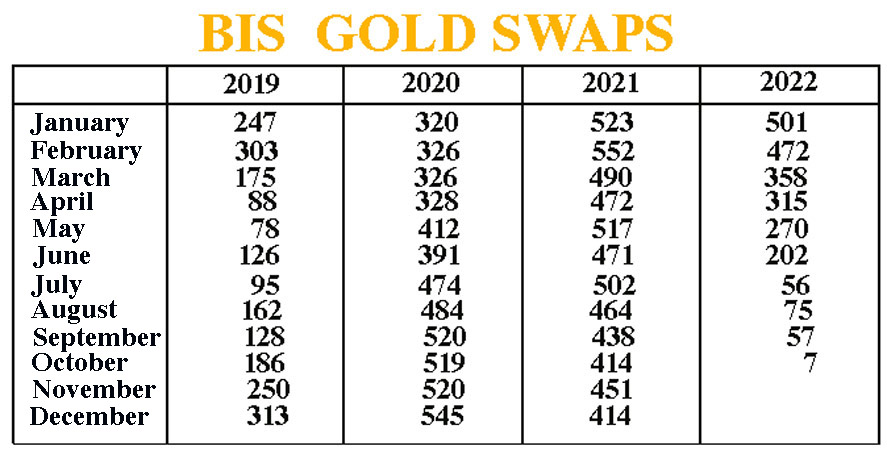 Every month, year after year, the BIS has settled swaps for hundreds of tons of gold.

It seems that the BIS has almost finished closing down the gold swaps.

I’ll let you enjoy that second piece of good news. In order not to extend this already very rich article, I give you an appointment in the second part.