"While the final Basel III standards were set to be implemented starting from January 2022, in light of the Covid-19 pandemic implementation was deferred by one year to January 2023", can we read in a BIS document published in January 2022.

This postponement is part of the reason why our expectations for the price of gold have been disappointed this year.

Currency Reset: Basel III and the Implementation of the NSFR (Cyrille Jubert)

The long-term structural liquidity ratio (NSFR, Net Stable Funding Ratio) is one of the Basel Committee's key reforms to promote a more resilient banking sector. The NSFR requires banks to have sufficiently liquid capital commensurate with their market commitments.

Since the beginning of 2020, tough negotiations have taken place between the European Union, the LBMA and the BIS, to force or, on the contrary, exempt the bullion banks from holding liquidity reserves covering 85% of their speculative positions on precious metals. Bullion banks, including those acting as clearing members on the London over-the-counter precious metals market (LBMA), have fought to bring that liquidity down to 50% (Reuters), or even to be exempted from the NSFR altogether. The World Gold Council and the LBMA released a 58-pages letter explaining that applying this rule to the LBMA would be so costly that it could cause the market to collapse.

After the implementation of the Basel III rules, mortgaged gold will not be recognized at its full value.

Options, futures and gold loans will be recorded on bank balance sheets as speculative items, therefore negative in terms of security and stability, while physical gold on the balance sheet will be a bonus added to the credit of the bank.

All European and American banks are already in compliance with the Basel III rules. Only banks linked to the London precious metals market had been showing resistance.

This is why the markets have been in tight flux since 2020. Swiss refineries have been operating in 3×8 to meet bank demand, focusing on refining gold for months.

After the Western sanctions against Russia, which resulted in the banning of gold from Russian refineries, the tension increased. This likely explains why COMEX gold inventories are down 38.7% since January 2021, down 15 million ounces.

Banks, which lent their gold bullion by the day, week or month to ETFs, will now have to recover them to improve the quality of their balance sheets.

It should be noted that the conditions of the SPDR Gold Shares ETF (GLD) were modified on April 29, 2022. From now on, the SPDR Gold Trust fund grants itself the right to refuse requests for delivery of gold from investors holding units.

ETFs do not have to comply with Basel III standards. But once the lending banks have recovered all their bullion following the application of the NSFR, GLD could become a simple tracker of the gold price, without being backed by any physical gold reserves.

For its part, the BIS seems to have finished unraveling the imbroglio of gold swaps just before the implementation of Basel III in January 2023.

It took the bank more than 11 years.

Is it pure coincidence that this period corresponds to the consolidation phase of the strong bullish leg observed between 2011 and 2022?

During the bullish rally that followed the devaluation of the British Pound on November 18, 1967 and the collapse of the "London Gold Pool", there was a first leg up, followed by a phase of consolidation between the end of 1974 and mid-1978. 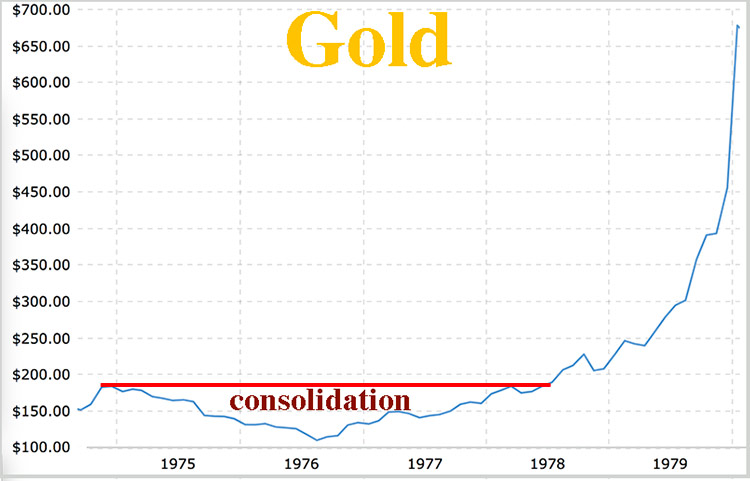 Get ready for a very big rise in gold in 2023. All the conditions are now in place, not to mention the energy crisis, the economic recession, the cracks in the bond market, the cryptocurrency crash and the growing geopolitical tensions.

As for silver, like during every bullish rally in gold, it will amplify the movement.