Last week, a systemic shock hit the crypto ecosystem. Cryptocurrency exchange giant FTX, which had more than one million users in February 2022, became illiquid in a matter of days. In 2021, the platform handled the equivalent of more than $700 billion in transactions. Its CEO, Sam Bankman-Fried (SBF), is now at the center of the turmoil. "We're excited to keep climbing together" he declared two days before the disaster. Then, in a tweet on Tuesday, November 8, he announced the inability of his platform to ensure customer withdrawals. Despite a rescue attempt with Binance, the opacity and instability of the FTX system has turned against its creator...

As a result, FTX's cryptocurrency, the FTT token, fell by more than 90% in a single week, taking most cryptos with it. The equivalent of nearly $3 billion in capitalization evaporated in a matter of hours. The scale of the FTX system is proving to be incredibly similar to some 19th century bank runs...

The birth of a giant and the suspicions of a "Ponzi"

Among investors in the FTX project, we can mention the giant BlackRock, but also Circle, or even Alan Howard. But how did a platform that had everything to succeed implode like this?

The answer lies in accounting issues... The impossibility for the platform to ensure withdrawals was first born from a mismanagement of customers deposits. In fact, Reuters reports that the equivalent of $1 to $2 billion in customer funds have disappeared. Sam Bankman Fried is said to have secretly transferred $10 billion of clients funds from FTX to Alameda Research, the brokerage and investment firm of which he is also the CEO, to fund risky bets. But the cryptos market's collapse has generated significant losses for Alameda Research, and most FTX executives were reportedly unaware...

On Saturday, November 5, FTX became illiquid (liquidity was 80% of available cash). This problem is first and foremost a management problem, since the lack of separation between users' funds and FTX's own funds is a serious security error. This is known as the principle of asset segregation, which is traditionally mandatory in traditional finance. Yet nothing predisposed Sam Bankman- Fried, an MIT graduate and former trader, to lead entire sections of the cryptos industry to ruin. On Thursday, November 10, he openly declared "I fucked up and should have done better". Finally, on November 11, FTX initiated the procedure to file for bankruptcy.

The cryptocurrency market is a market of innovation, assuming a certain amount of entrepreneurial freedom, but the fact remains that most of the computer scientists who make up this industry are clearly not financiers.

Within the crypto ecosystem, the shock is palpable among investors, and the trauma remains. One can read tweets like this one from Obey Raves (Obey Alliance):

While the irony may still be there, some FTX customers (and even employees) who invested a large portion of their savings are now left with nothing. In January 2022, FTX was worth the equivalent of $32 billion and Sam Bankman-Fried's fortune was estimated at nearly $17 billion. Today, there's nothing left.

When the platform launched in 2019, Binance boss Changpeng Zhao had taken a 20% stake in FTX. But FTX's exceptional growth made it a serious competitor. Everything accelerated on Wednesday, November 2, when CoinDesk published a paper showing that a large part of Alameda's balance sheet was held in FTX token. As a result, Binance decided to sell all of its FTX tokens for several hundred million dollars. 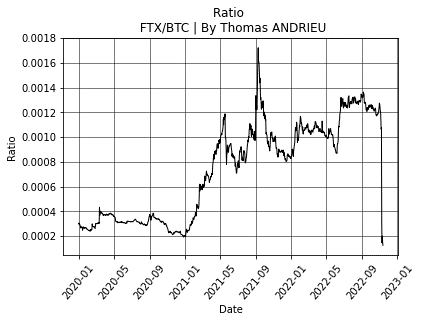 The chart above shows the evolution of the FTT/BTC ratio, i.e. the relative value of the cryptocurrency FTX (FTT) compared to the bitcoin (BTC) price. We notice that the relative value of FTX (represented by the price of FTT) has significantly increased since January 2021, despite the bear market observed. It took only a few hours for the FTT price to eliminate several years of growth...

Cryptocurrencies are not the gold of the 21st century...

As bitcoin (BTC) hits new lows near $16,500, gold has marked a significant rebound in the wake of stocks and good U.S. inflation numbers. The price of gold gained more than 5% in one week, which is quite remarkable. Surprisingly enough, the price of gold in dollars has moved closer to the profitability zone of mining companies. On the chart below, we have plotted the price of gold with the top 1% of the most important variations (vertical lines). The shock observed on November 4 is clearly part of a market signal (read "Towards a Gold Reversal in 2023?"). 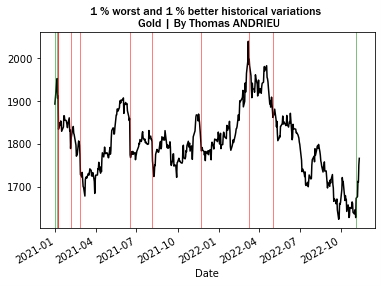 Cryptocurrencies are undeniably a great innovation, revolutionizing both the way we think about exchanges, but also the way we deal with data and contracts in the 21st century. However, there is nothing authentically common between gold and cryptos (see my book, "Révolution Cryptos"). It is important to remember that the role of bitcoin miners is decreasing over time, while the role of physical gold miners is increasing (read "Mining Companies: What are Their Attitudes Towards Gold?").

Although gold is non-negligibly correlated to traditional stock market indexes, its market structure makes it quite unique. As a result, the two markets for gold and cryptocurrencies differ statistically. Bitcoin is 3.5 times more volatile than gold. In fact, an "exceptional" variation in the price of gold (say in the top 1% of extreme variations) is a variation that exceeds 3%, when at the same time it is a variation of more than 10% for bitcoin.

The return of physical assets and ownership? 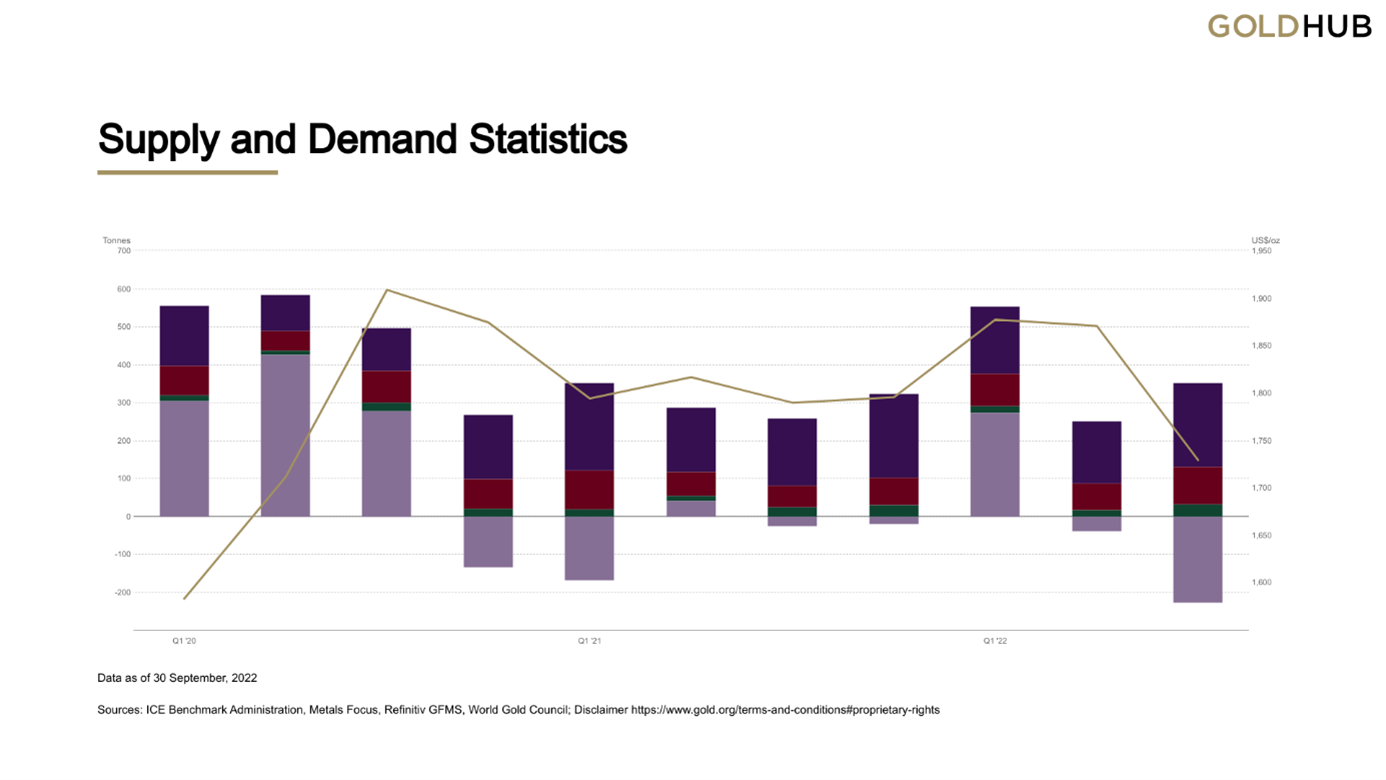 Although investors in physical gold have struggled to boost their purchases in the third quarter of 2022, the overall momentum remains strong. In fact, if we look in detail, we can see that demand for gold coins and bars is increasing, while at the same time ETF funds are selling massively, which has the effect of "artificially" reducing physical demand. This shows a significant revival of interest in holding physical gold, especially since the metal stocks registered at the COMEX are particularly low.

The FTX bankruptcy is a textbook case of poor accounting and high risk exposure. Within the crypto ecosystem, questions are being raised about whether or not it is possible to trust centralized intermediaries. As a result, it is important to distinguish between two ways of securing one's assets as much as possible:

The return of the famous "bank run" is not a utopia. In the 19th century, people still attacked their bankers during bloody riots in order to recover their little remaining savings. The first major bank run on Wall Street was triggered by the manipulation of the gold price in 1869 (read "Gold: the Fisk-Gould Scandal and the Black Friday Crisis of 1869"). Since then, particularly negative stock market days have been called "black" days, in reference to these days of violent riots.

The effects of FTX's bankruptcy on the future of crypto

The FTX platform was previously the second largest cryptocurrency exchange platform in the world. Binance remains unchallenged for the moment, but the first criticisms of monopoly are appearing. Indeed, Binance has more than 28 million users and exercises a real centralizing hold on the market. Thus, the magnitude of this bankruptcy is not without consequences for the crypto ecosystem, which has lost the equivalent of more than $200 billion in capitalization. In addition to the feared effects of contagion and cascading bankruptcy of platforms, such as Crypto.com, a breach of confidence is occurring among investors.

The fact that bitcoin (BTC) is on new lows is a very pessimistic signal, having taken several months to stabilize around $20,000. Moreover, the bullish (and significant) recovery of the stock markets (+13% for the Dow Jones over one month), reinforces the underperformance of bitcoin compared to all other assets. For some analysts, the price of bitcoin is now approaching its production (mining) cost.

So far, however, the crypto ecosystem seems to be resilient to this new market decline. The solvency of other platforms could be affected, but the overall momentum would not be challenged. Finally, this collapse probably also assumes a future regulation by governments. In this sense, the more accomplished regulation of cryptocurrency brokerage or issuance activities could help, or hinder, the industry in the long run.

The conclusions of an historic crisis

Ultimately, the cryptocurrency market has suffered an historic shock in recent days. The price of cryptos has rapidly stalled, and the crisis of confidence is deep as tens of thousands of investors find themselves in deep trouble. Worthy of a 19th century bank run, the collapse of the second largest cryptocurrency exchange platform, FTX, raises questions about the seriousness and viability of some market players. This bankruptcy is above all the result of a lack of transparency, and as often, of major management problems.

Indeed, the FTX platform used its clients' funds, in its name, to invest in Alameda Research. This transfer is not only opaque in that it does not meet the principle of asset segregation, but also because it is a company that has experienced losses as a result of the decline in the cryptocurrency market. While FTX did not become insolvent, it did become illiquid first. That is, FTX customers could no longer withdraw, as the platform no longer had enough liquidity to meet all withdrawal requests.

More than ever, this bankruptcy reminds us how important it is to pay attention to one's intermediaries on the one hand, and to the security of one's assets on the other. In this context, gold stands out from cryptocurrencies and reminds us once again of the lack of comparability between both assets. In the same way that we have witnessed bank runs on gold in the 19th century, we observe in recent months a renewed interest of investors in physical gold (coins and bars), who prefer to hold this gold directly in their own name rather than through an intermediary... But once again, in a young and volatile ecosystem, the historical past is often overlooked.