As public debt in the eurozone approaches €12 trillion (95.6% of GDP), the single European currency has never been so threatened by structural instabilities. On the one hand, the ECB's key interest rate changes are increasingly inappropriate for such a differentiated monetary union. On the other hand, the deterioration of the bond market in recent months is the most significant ever observed in at least half a century. Of the 27 member countries of the European Union, "only" six countries pose the greatest risk of destabilization of the euro. These are mainly (in order) Greece, Italy, Portugal, Spain, France and Belgium. Bond market instability is expected to have major long-term consequences for the euro.

The world's largest market is faltering: more than $10 trillion evaporated!

According to ICMA, International Capital Market Association, the global bond market was worth about $130 trillion in 2020. This included nearly $65 trillion in government debt. In other words, the world's public debts in 2020 represented nearly 76.5% of the world's GDP, with a strong distribution of these debts in developed countries.

Thus, the index developed by JP Morgan to track the performance of government bonds in developed countries has fallen by nearly 9% since the beginning of 2022. This is the sharpest drop recorded in nearly four decades. This fall in bond values is even more significant for European countries. It is likely that the eurozone will experience the biggest disruption to its public debt in nearly a century. Moreover, the average maturity of most of these bonds would be around 2027 to 2028.

The "deflation" of the global asset bubble?

But then how can we explain such a devaluation? Taking into account the market's devaluation indices and its estimated value, this means that the global bond market would have lost more than $12 trillion in valuation since the beginning of 2022! Added to this is the devaluation of global equities and cryptocurrencies. In the same way, the devaluation observed on equities probably amounts to around $18 trillion, and $2 trillion of losses for crypto-currencies. We are therefore witnessing a historic devaluation of most assets for several trillions of dollars. That's the equivalent of an average loss of over $4,500 in capital for every person on Earth. Such an upheaval will have lasting impacts on the world's monetary and financial systems.

Here we must highlight two mechanisms in this massive devaluation of financial assets:

The table above shows the details of the public financing need in France in 2022, which amounts to more than €300 billion. In addition to the traditional deficit, there is the repayment of past debts, the rate of which is expected to rise. Debt service will reach an all-time high of nearly €150 billion in 2022. The risk of rising interest rates is that the cost of rolling over the debt will skyrocket and ultimately lead to an exponential spiral of deficits and defaults. In fact, a borrowing rate permanently above 1.5% for France puts its very long-term solvency in serious jeopardy.

Moreover, the Cour des Comptes estimates this structural deficit at 5% of GDP in 2022 (4% according to other estimates), i.e. twice as high as in 2019. While France would try to aim for a deficit target of 3% of GDP in 2027, despite very low potential growth (almost zero), this would have to be achieved by putting pressure on the public sector. A high structural deficit is the economic expression of a strong social distrust of the government by companies and administrations. To put it clearly, French public finances are very much out of control at present.

The spectre of recession and long-term inflation?

The graph below shows the evolution of French GDP and average GDP over five years. Using projections of various degrees, it is not difficult to estimate that it is more likely that growth over this decade will slow down compared to the growth of the previous decade (+8.8% growth over 2011-2021). Moreover, while there may be a risk to growth in 2022, there may be another risk to the economy starting in the middle of the decade. This projection is consistent with the study of the cyclicality of the economy. 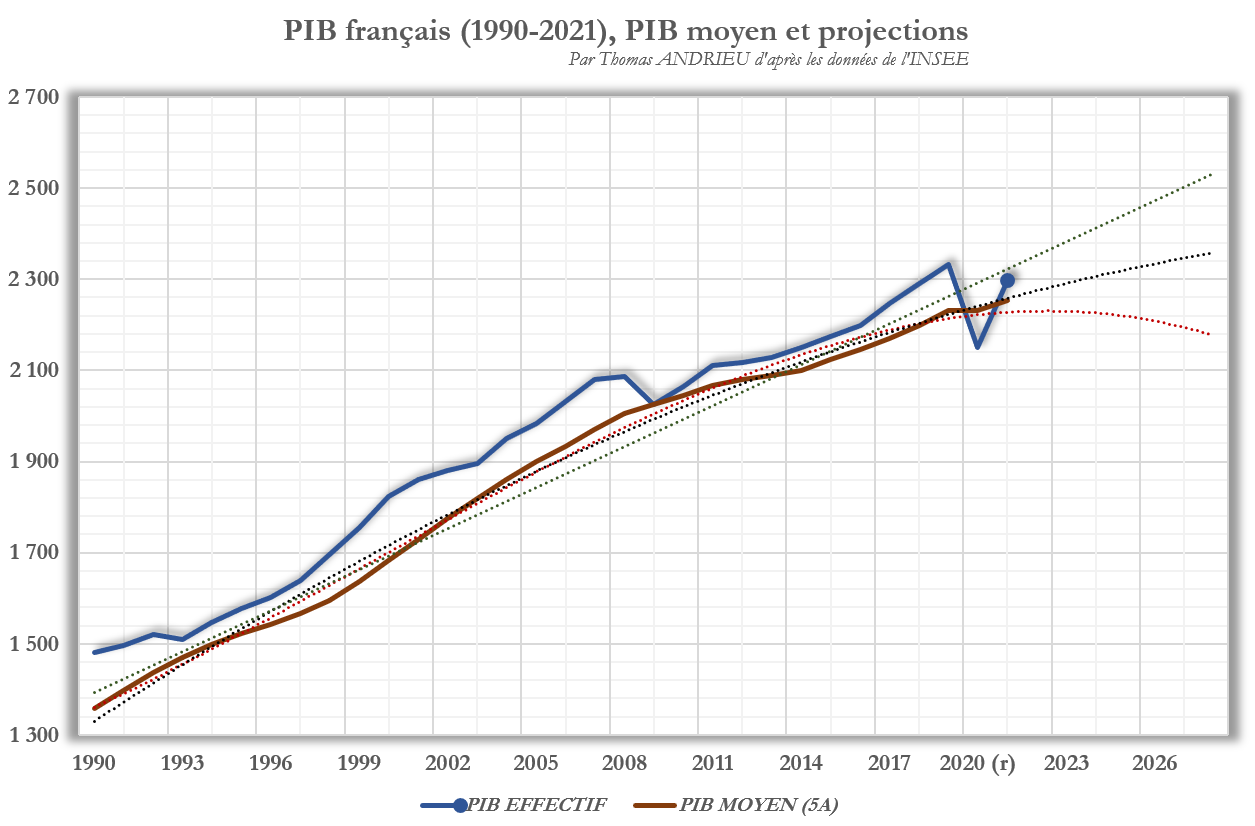 Effectively, the economic restrictions of the epidemic have durably threatened the economic balance observed since the post-war period. This is the first time since at least the Second World War that the observed GDP has fallen below the average GDP of the five years preceding it. This signal may consist, in addition to the inflection of the GDP curve since the 1990s (slowdown in growth), of a breach of long-term potential growth. In other words, if the debt will no longer come from growth in the future, it will come from structural and lasting inflation.

The idea that public debt can be repaid by growth is a myth in itself. This rhetoric, repeated by governments for forty years, has never been proven, and it is in fact more likely that an excess of public debt will reduce the productive capacity of the economy. Let's remember that in France, the weight of public spending in GDP was 60% in 2021!

Risk of destabilization of the euro: the bet of some managers

In mid-June, the ECB held an emergency meeting to "act against the risks of fragmentation". In short, this reflects the ECB's fears about the sustainability of the euro. In fact, the ECB recently announced that it would exit negative rates by the beginning of the year 2022, a historic event since 2016. The choice was not really left to the ECB as banks had already started to move back to zero rates in the interbank system. Now the ECB is in trouble as bonds are losing more than 10% of their value in the eurozone. 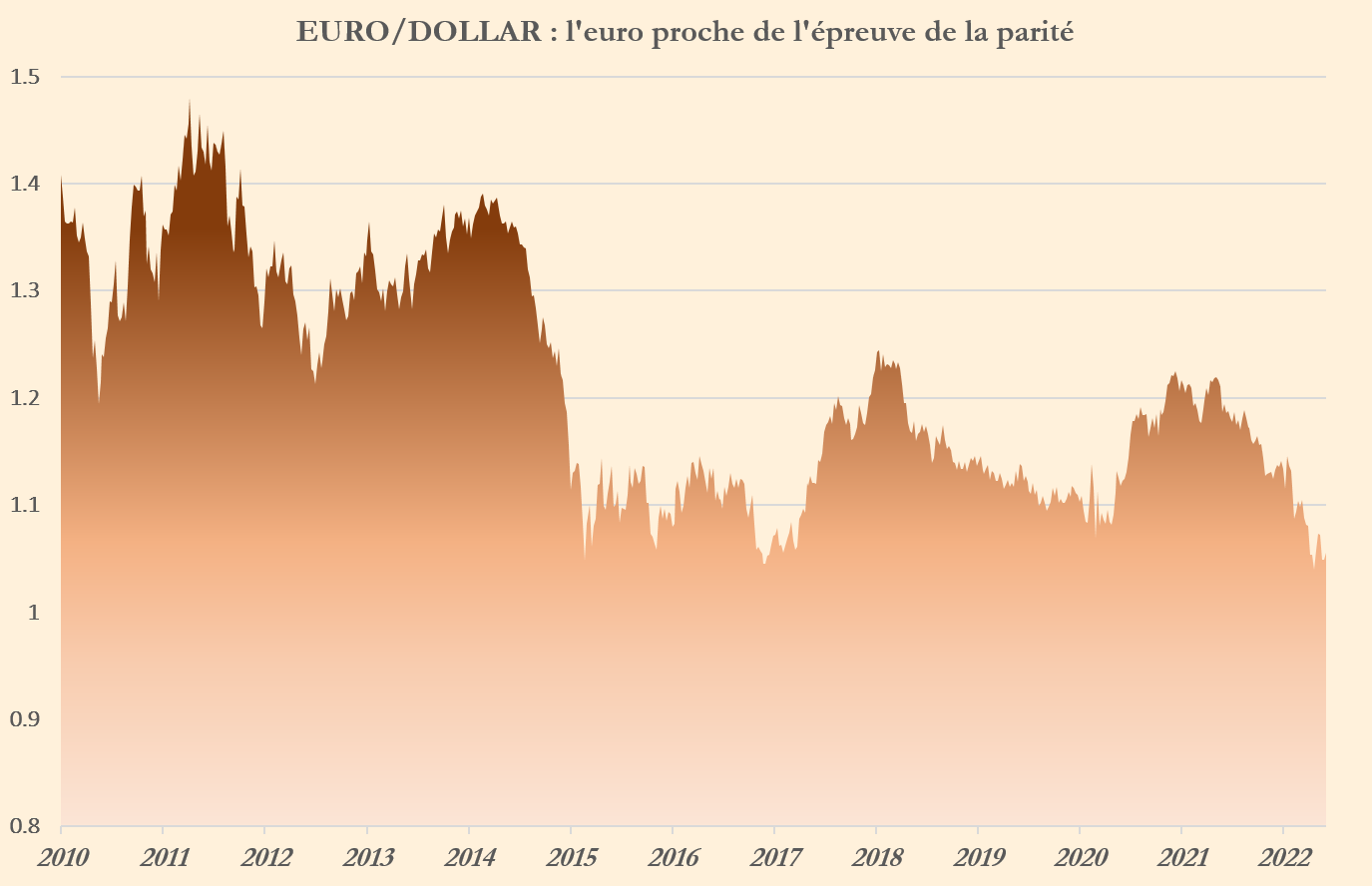 On the one hand, the ECB cannot leave rates (too) low without reacting to inflation that is 6.5 points above its target. On the other hand, the ECB cannot raise rates sharply, at the risk of benching the eurozone's bad performers. In both cases, the euro is devaluing. The euro has lost nearly 15% against the dollar since January 2021. This explains why the value of some European bonds has lost more than 20% over the same period.

In addition, we must also consider the economic situation of certain countries. France is seeing its trade deficit accelerate to such an extent that capital flows abroad are reducing the income of the French by nearly 3.5% per year. This situation is not new and also reflects the fact that Northern European countries are creditors of Southern European countries. In addition to financing public obligations, there is a structural need for private financing. The fragmentation of the euro may therefore occur quickly, and if this risk does not manifest itself in the coming months, it will probably reappear during the decade.

We are witnessing a historic devaluation of most financial assets, with the exception of commodities and especially precious metals. This represents on average several thousand dollars of capital loss for each person. In addition, there are the consequences of inflation and shortages. For the time being, this devaluation of many assets, led by bonds and stocks, has not had an impact on the real economy. However, many investments are indexed to bonds and shares, starting with life insurance and many pensions. Moreover, the magnitude of these financial losses has essentially a monetary impact. In this context where the monetary risk could become structural in the eurozone, many managers are protecting themselves from European risk, like billionaire Ray Dalio. The euro is likely to face a fateful test after two decades of existence, as most currencies do at this point in their history.

The euro is now close to major lows, while the ECB is already anticipating some measures against the fragmentation of the eurozone. Indeed, the loss in value of bonds poses many financing problems. France, whose average rate paid on debt is around 1.5%, is now forced to borrow beyond that. This means that the cost of debt, which had been declining for forty years, is turning around for the first time and is likely to lead to severe pressure on public finances from this decade onwards. Finally, we must consider the growth prospects that have been severely curtailed by public policy decisions. Clearly, the instability of the bond market is already accurately writing the economic story of the next decade!