What is happening in the European natural gas market is absolutely unprecedented. In physics, we would call it an unstable system: 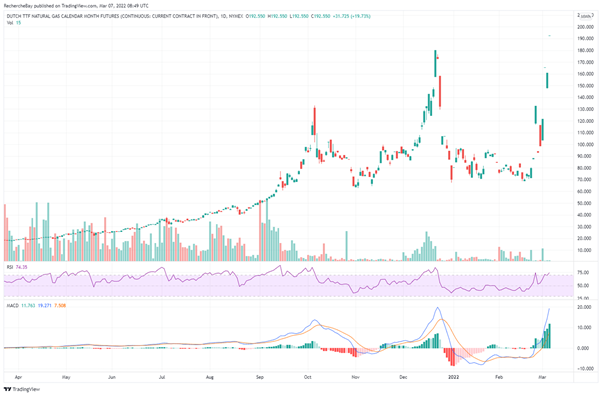 The TTF futures price benchmark for European gas prices has soared in a single day by +75%, now trading at €345/mwH, which is ten times more than last year, and is equivalent to an oil equivalent of $600 per barrel. In other words, the energy crisis we are going through is without equivalent in history and now poses the double risk of a sudden stop of the European industry and of a systemic accident at the banking level, as no financial institution is ready to face the insurance of such a price shock.

This rise in gas prices is reflected in the historic rise in electricity prices across the continent. Spain is now experiencing the most dramatic increase: 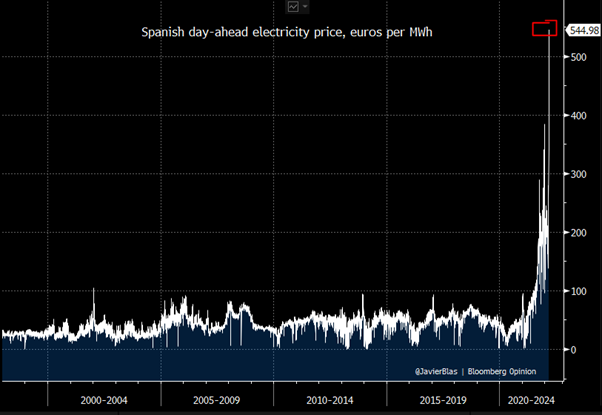 But in the commodities sector, nickel has seen the most intense action this week.

The metal has been suffering from an unprecedented stock rally on the London Metals Exchange (LME) for a year now: 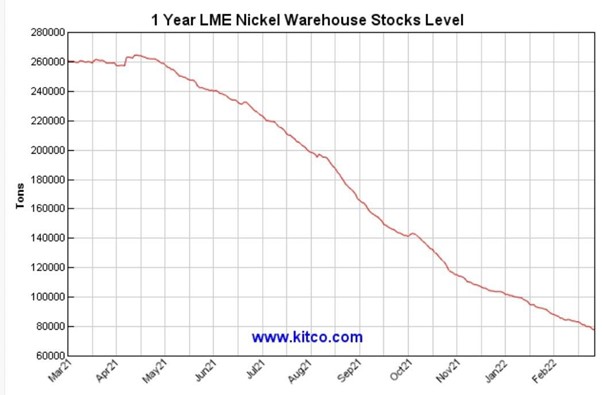 In a single day, the price of nickel soared by more than 75% in a historic short squeeze that forced the LME to suspend trading in the metal: 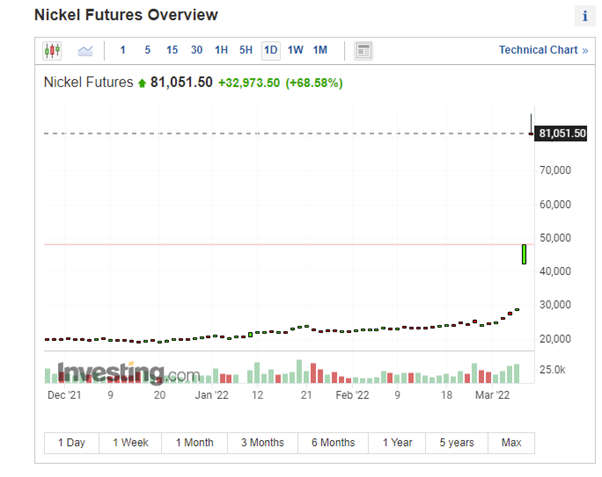 A financial institution was forced to buy back its short positions in a matter of hours, undoubtedly incurring losses of several billion dollars.

This panic in the nickel market has led to fears of violent short squeezes in other metals markets.

In a hurry, the LME has just changed the rules for five other metals besides nickel. These are cobalt, aluminum, zinc, lead and tin. For each of these metals, futures sellers can take a breath: they are no longer obliged to deliver the metal and price control tools have been put in place.

Curiously, these new rules do not apply to lithium, where a short squeeze is taking place, which is also historic: 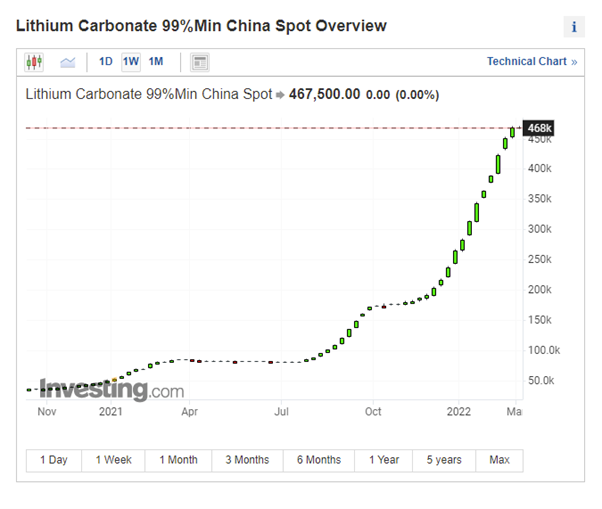 The LME is therefore officially taking sides to protect the short positions of some of its selected members, depending on their degree of importance to the exchange and the markets concerned.

We are therefore witnessing a direct intervention (bailout) by certain protected selling institutions in the futures market using the money of long investors in these markets.

What we are witnessing is exactly what has been anticipated by those who have been criticizing the biased operation of the futures market for so many years.

This change in rules also affects the agricultural commodities market. It is now impossible to invest in corn or wheat futures on the Chicago market. Only liquidations of futures contracts are allowed.

For the past few days, the commodity futures market has been experiencing a shock that calls into question its functioning and integrity. With no delivery possible and with the interventions of the market authorities aimed at protecting selected participants, the very integrity of this market is completely called into question.

More seriously, the securing of supplies and the determination of prices is now at risk of going through other trading systems, at a time when traceability is becoming essential in the context of the sanctions imposed in response to the Russian invasion of Ukraine.

Ukrainian and Russian agricultural exports are at a standstill. And this eliminates at once 30% of the total volume of wheat exports worldwide. Shipping insurance contracts are gone, fertilizer will not be available for the next planting season. The world will have to do without a third of the wheat reserves in 2022.

In Ukraine alone, one billion people are dependent on these vital exports, and this concerns countries that, without these resources, risk falling into a state of food insecurity:

The absence of these resources poses a huge supply concern on nations already very weakened by the current inflation. The dysfunction of the futures markets adds a new stress to the determination of prices and the securing of resources. We are already at a level of alert that exceeds the level reached during the last Arab Spring event. The outbreak of conflicts in these countries is probably the next step in geopolitical news. This would be the logical continuation of the war that started in Europe.

The entire commodities market is now at risk of a massive short squeeze, and further intervention in the futures markets is to be expected to protect traders whose short positions now represent systemic risks for the entire financial market. The derivatives attached to this market will not be able to withstand the consequences of severe supply shortages and equally severe price increases for long. These derivatives were set up as part of insurance strategies, they are not designed for such extreme market events.

If the history of the last ten years is any guide, we can expect radical changes in the functioning of the futures markets, as well as a massive bailout of institutions caught by surprise by this sudden rise in commodity prices.

The emergency plan announced in Europe to raise funds in the face of rising energy prices is undoubtedly intended to reassure the markets in this sense.

The price controls that the market authorities are beginning to put in place will no doubt be accompanied by other fiscal measures aimed at lessening the shock of this increase at the consumer level. These proposals are useful in the short term, but they reinforce currency devaluation and exacerbate the effects of inflation in the long term.

But the urgent need, it seems, is to react as quickly as possible to the excessive fever in commodity prices.

And gold is not escaping these massive interventions in the futures market.

The rise in gold is, for the moment, much more contained when compared to the increases in other commodities: 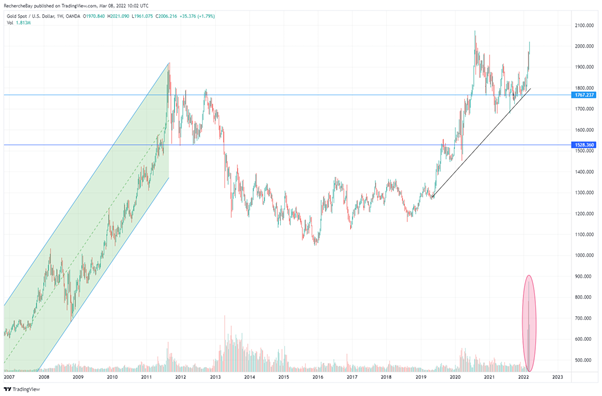 The main reason for this underperformance is the greater ability of commercial traders in the futures market to control the price of gold. The gold market is far more important than the nickel market for these massively exposed commercial banks, via an ever increasing number of short positions. The volume of contracts sold to keep gold below its highs exceeds anything seen in the last twenty years. Even in 2011, traders did not intervene in such a massive way to control futures prices. The futures market is reaching new highs in terms of capital invested. These short positions cannot be committed without the implicit support of a larger entity. Conversely, the support of such large long positions cannot be made without the likely support of a sovereign entity either.

A reading of this gold futures market may reveal the continuation of a war that is now being fought on the monetary front.

But it is the pace of gold purchases by central banks that is likely to accelerate.

The war in Ukraine and its economic consequences have completely changed the strategy of central banks. The sanctions imposed on Russia prove that international settlement channels can be closed in a matter of hours, and reserves held abroad can be seized at the click of a mouse. The Russian reaction to these sanctions proves that the debts held can also be converted into devalued currency unilaterally.

Central banks realize with this war the difference between assets without counterparty and assets that depend on third party commitments.

Logically, physical gold regains the status of a priority investment in such a context.