If you look at the metal prices on the LME, the London metals market, they are at their all-time highs. 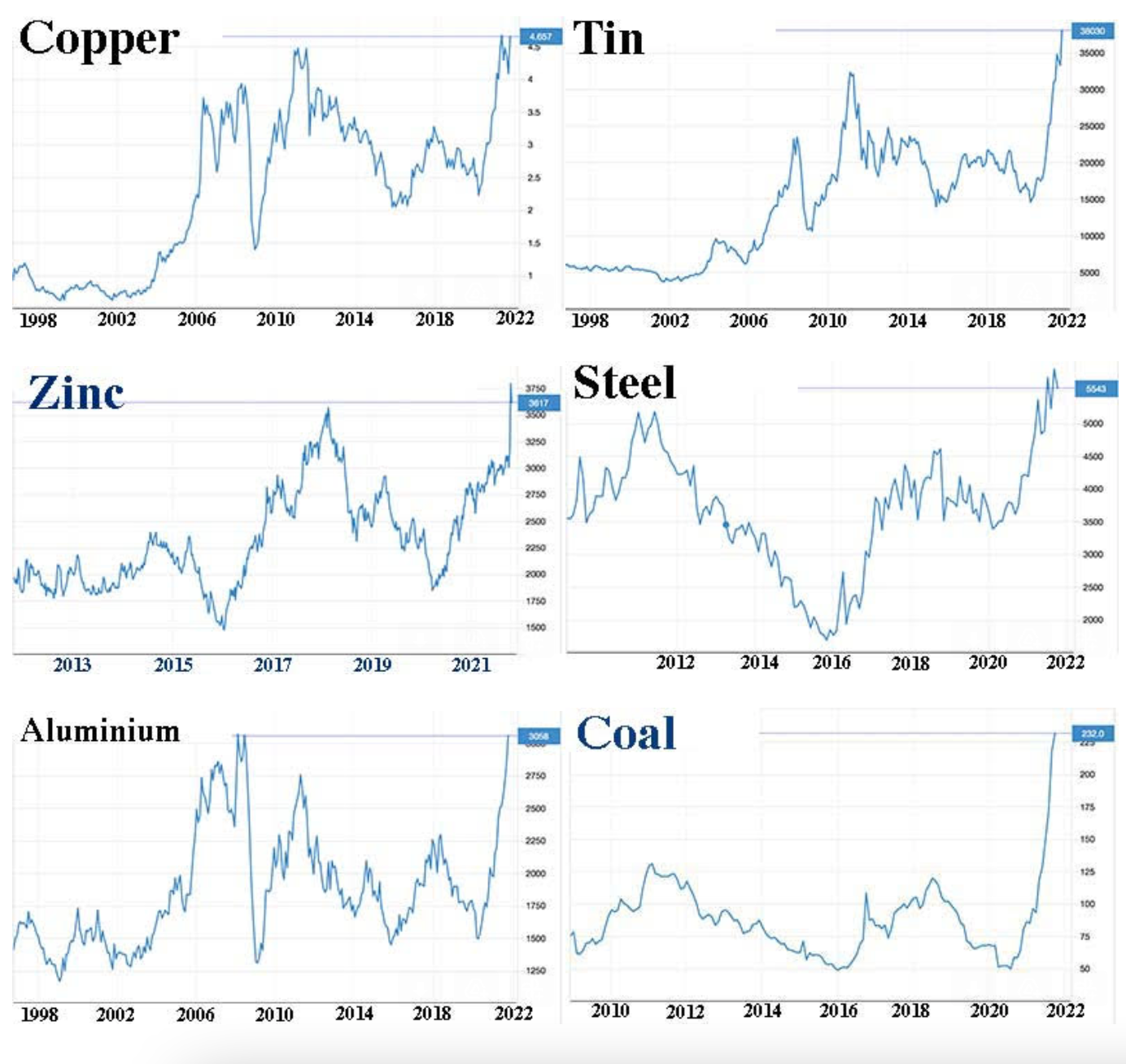 The price of natural gas is soaring in Europe, while waiting for some technocrats to deign to endorse the compliance of the Nord-Stream2 gas pipeline, which would allow Russian gas to relieve this essentially political crisis.

China produces 3 902 Mt of coal annually, this is 8 times the U.S production, for an annual consumption of 4 000 Mt. Its soil reserves represent 37 years of consumption. Chinese energy is 72.6% dependent on coal, which explains the terrible air pollution in China.

Yet despite its immense reserves and mining production, China is currently experiencing a major energy crisis due to a coal shortage. As a result, the price of it, which fluctuated between 600 and 1 000 per tonne on futures (January Zhengzhou) for two years, soared abruptly in September and listed 2 226 on October 15. This price hysteria is reflected in the price of coal on the London market.

At the same time, India, the world's second largest producer of coal, is experiencing a similar energy crisis and must limit the distribution of electricity. Its 135 coal-fired power plants as of October 15 had only 8 days of fuel and half of them only had 2 days of operation.

In China as in India, there is a powerful political will, which probably aims to comply with the agreements on the climate, but the first effect of which is a sudden slowdown in the economy. In China, for example, authorities have restricted the supply of energy to the most consuming industries. Of course, these include the steel industry, mineral refining and smelting requires a lot of energy. One of the most glaring side effects of this Chinese administrative decision is the shortage of magnesium. Yet magnesium is the 8th most abundant element in the Earth's crust and constitutes 13% of the planet's mass. China, because of its low-cost workforce, produces 80% of the world's magnesium. But since its production processes require a lot of energy, companies in this field have just been drastically limited. As a result, magnesium sheets, which make it possible to meet the weight saving requirements in the automotive sector, will become a scarce commodity from the beginning of next year, which will put the automotive industry in slow motion, if this is at a standstill. And not just in China.

Since China is the factory of the world, expect a growing shortage of everything.

What about precious metals?

Remember that 70% of silver comes from the refining of copper, tin or zinc.

If the prices of these metals skyrocket, so must that of silver in the very near future. What is holding back this increase is largely the unwinding of derivatives with a view to the implementation of Basel III rules at the end of the year in London. (Which is even more true for gold.)

What the chart below does not show for copper is that there are major inventory problems today. Between the price of paper, that is to say futures, and the demand for delivery, there is a widening gap. Manufacturers must pay a premium to obtain delivery of copper. This is a historic first.

This is what is already happening with silver. There is a strong premium on silver coins, the prices of which at online retailers are often quite far from the prices displayed on futures, especially in the United States and Canada.

In September 2021, India is back with imports of 665 tonnes of silver. 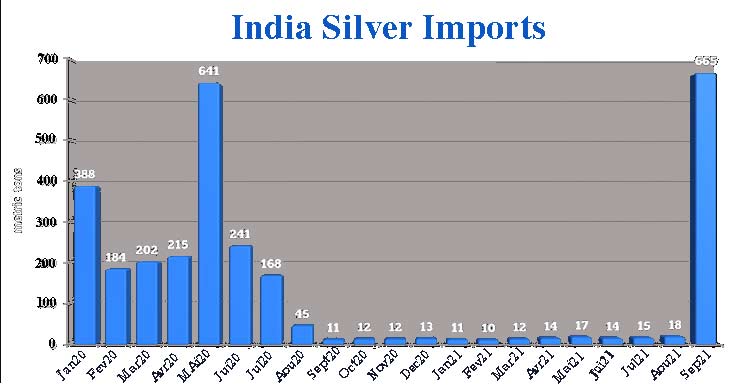 India buys silver mostly in non-Western markets. But as we have seen since April 2020, in order to be able to deliver physical silver, the COMEX had to look for silver everywhere in the world (Korea, Kazakhstan, Uzbekistan, Russia...). India's comeback will dry up stocks of these suppliers and therefore indirectly weigh heavily on the supply difficulties of Western markets. 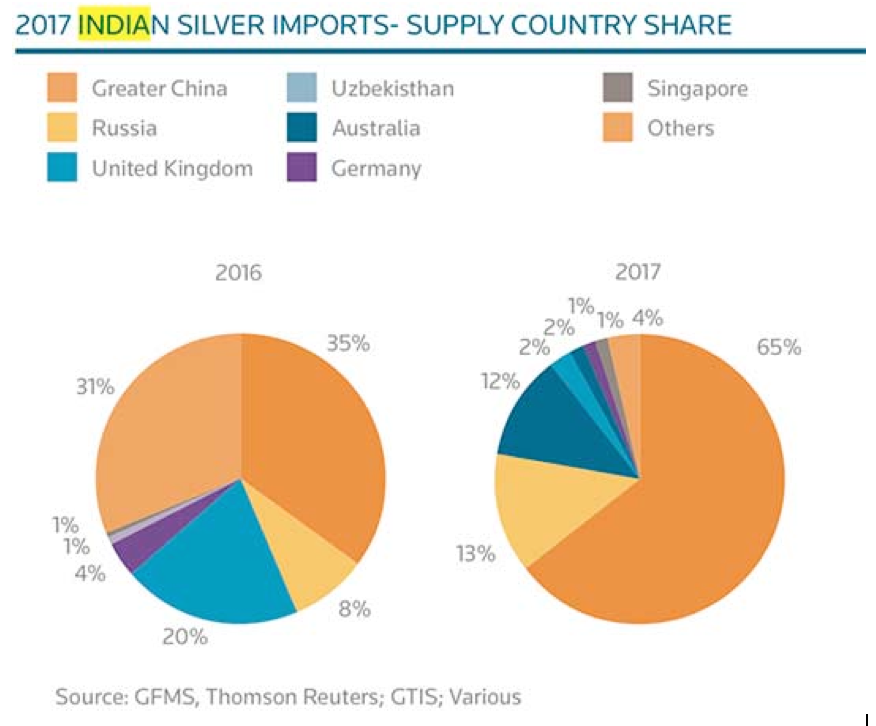 If the energy crisis in China hits copper refiners, it will systematically limit part of China's silver supply. China will therefore buy more on Western markets.

Graphically, the silver turned higher in mid-September. Prices will quickly return to the heart of the canal since July 2020, that is to say between $ 27 and $ 32. 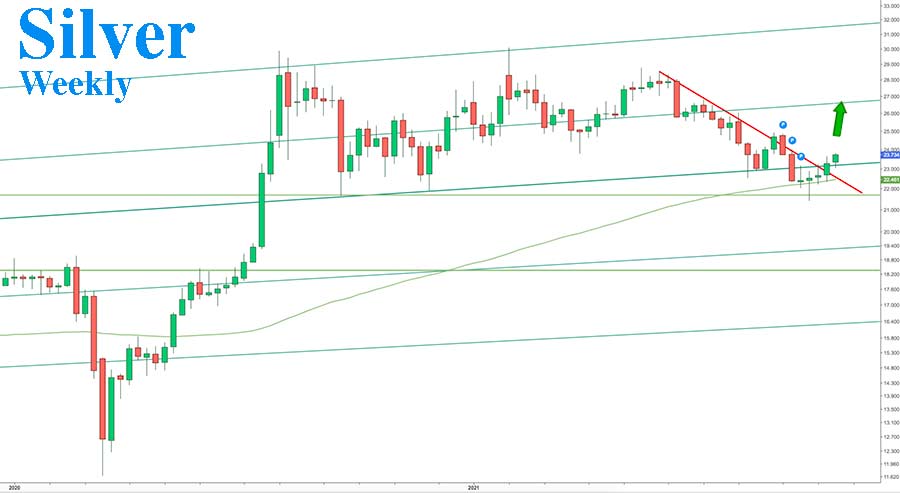 However, when looking at the charts of other metals, it is evident that it is not chartist analysis which can predict the extremely violent rises which occur in times of scarcity. Even more when there is a huge “short-squeeze” in preparation, as in the silver market. The physical silver-to silver-paper ratio is still close to 1/500 and it will be urgent for traders holding "short" positions to unwind their naked-short sales contracts.

Before the end of December, we could have some nice surprises on the price of silver.