There was an oil shock in the 1970s. We are currently living through another inflationary shock, but this time around, the shock concerns all commodities.

Each week, we look on as one or more entities in the commodities market takes off.

This week, it is copper that is offering us a spectacular chart.

This is what the rush on an essential metal that is suddenly in short supply looks like, in a single image:

This chart measures the gap between the cash contract and the 3-month contract for copper (LME cash to 3-month price spread) on London’s futures market.

At present, stocks of copper are so low that it is preferable to pay $1100 extra per tonne (a premium of more than 10%!) to ensure one’s delivery is honored...rather than take the risk of being left with nothing. This tension on the copper market has never occurred before. The price of copper is up 300% over the last three months and the spectacular take-off of this spread alerts us to a historic event that is resulting in a veritable STOCK SHORTAGE in the market.

The origins of this tension are manifold: the cost of the energy required to transform the metal and the difficulties in the production chain, coupled with a very tense situation as regards stocks.

The phenomenon of stock shortage is being greatly exacerbated, however, by the very way in which the copper derivatives markets work.

The futures markets were a necessary and sufficient tool for controlling prices during the previous crazy phases of monetary expansion. When the stocks are too low, however, as is the case today, a return to reality occurs. You can’t print copper in a derivatives market! The metal is responding instantaneously to the law of supply and demand and returning to a price that is no longer dictated by a derivatives market. These readjustments are having a multiplier effect on prices due to the very structure of these derivatives markets, particularly the leverage effect.

The violence of the readjustment of prices obviously poses a problem to all the financial institutions (alternative funds and certain banks) which have been taken by surprise, and which must face up to the astronomical costs of hedging, backwardation or rolling options. A ‘squeeze’ of this kind has already affected a fair few victims on the natural gas contracts. One imagines that what’s happening on copper will not be a pain-free situation for numerous players...and this will no doubt result in the need for an additional ‘bailout’ of these institutions...leading to more money printing...leading, in turn, to the skyrocketing of commodities prices!

The tension on the copper prices is at risk of spreading to other metals such as magnesium, aluminum, silver, tin, zinc... 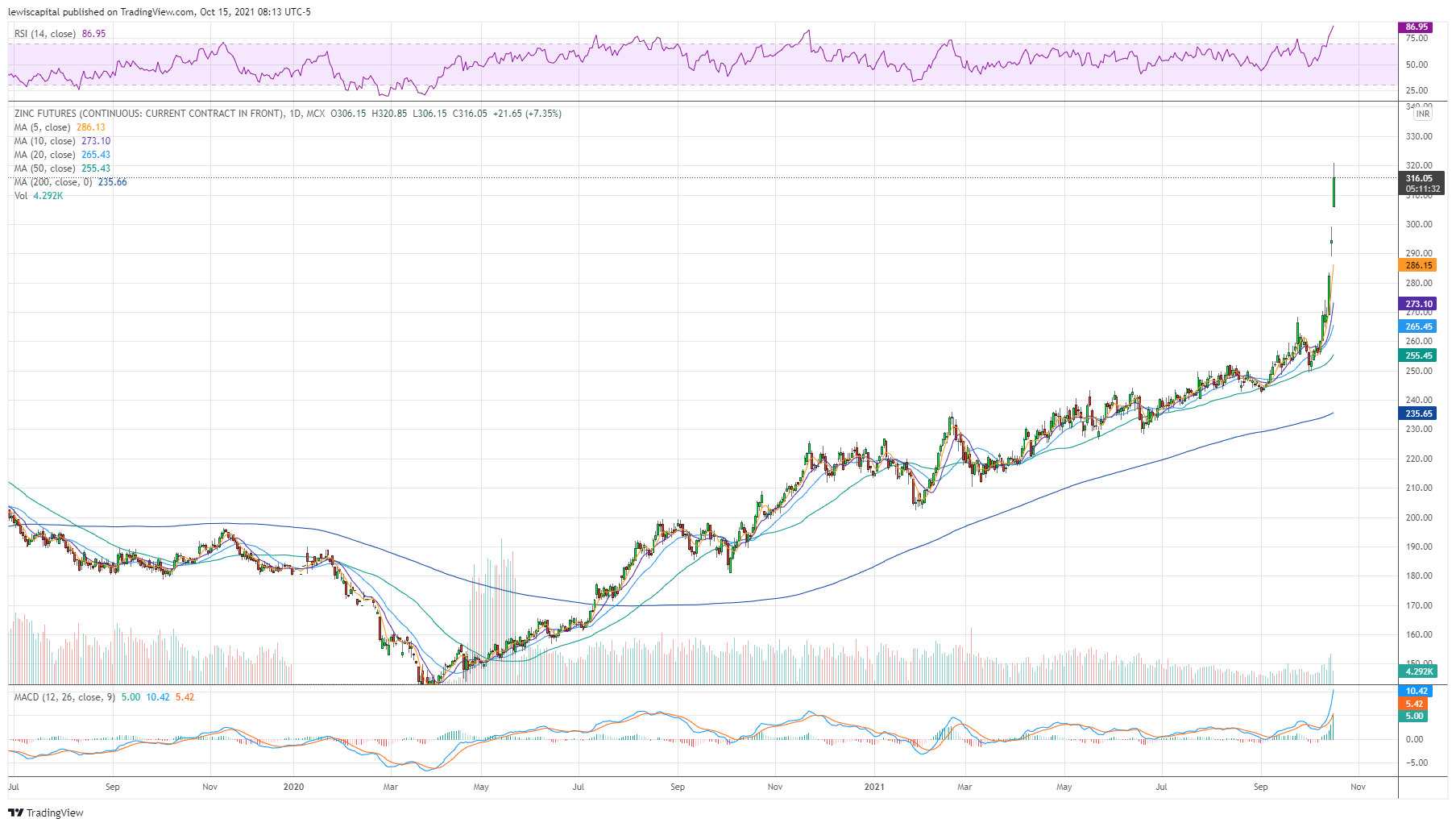 These rises are not limited to the metals sector. All of the prices of commodities are undergoing a rise that is accelerating as the markets re-evaluate the extent of the monetary expansion policies.

Cotton is soaring to an all-time high.

But another price is soaring spectacularly as well. It is the price of coal, for which the spot price of the forward contract on the Chinese market has been multiplied by a factor of 3 in barely three months...there, too, the rise is responding to a level of stock that is too low...

This is a special feature of the Chinese market: the prices of coal prefigure the general level of prices.

This rise in the price of coal signals that an explosion is about to happen in China’s PPI index, which measures the level of the prices paid by the country’s producers:

In the United States, it is not the price of coal that is signalling that the inflation figures are going to take off. The forecasting tool used across the pond is the "rent of shelter" (over 40% of the CPI index).

The figure for the rent paid by U.S. households has been undergoing a dizzying rise for several months. It leads the next CPI figure by 5 months. Those who are expecting the inflation in the United States to fall back down again may well be in for a surprise: 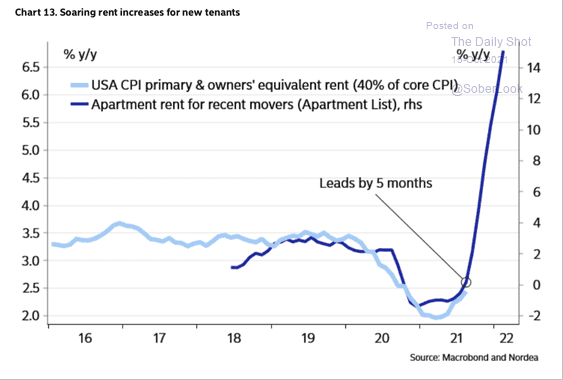 Whether in China or in the United States, there are tangible signals that the rise in prices is set to continue, and this is prompting more and more economists to completely revise the hypothesis about the inflation being “transitory”.

Even Tom Barkin, from the board of the Fed (Richmond) has been forced to admit that this inflation is set to last longer than expected.

For his part, the businessman Carl Icahn announced on CNBC that there would be difficult days ahead for the U.S. economy, due to inflation that had become uncontrollable, the consequence of unprecedented money printing:

However that may be, the inflation that we are starting to feel is having its first knock-on effects on companies’ results. Profit warnings are being made one after another (the latest is from Zillow in the real estate sector, which is warning that the U.S. new-build market could hit the wall).

Consequently, analysts’ downgrades are once again on the point of exceeding their upgrades: 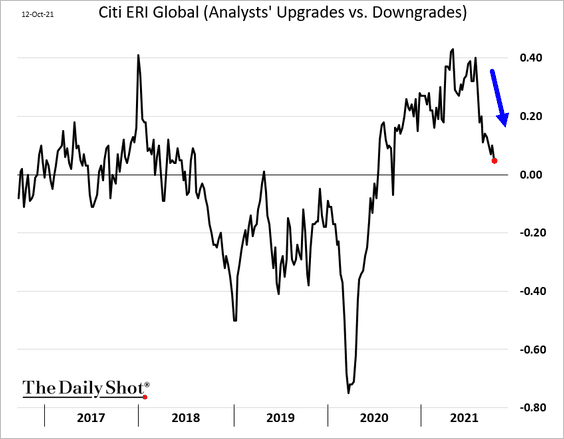 Even if companies’ results in the third quarter are not yet measuring these threats on the level observed in sales, the first consequences of the inflationary shock are going to make themselves felt as early as in the next quarter, as the series of warnings from all sectors combined attests.

Even if the Fed’s economists are still clinging to the myth of transitory inflation, numerous observers have already realized that this problem of a rise in prices is going to have deeper and more far-reaching consequences on the level of growth over the months to come.

The inflation is not about to stop anytime soon; if anything, it is spreading at a faster rate.

This can be seen in Germany, where the expectations of price rises, measured by inflation linked bonds, have been rising constantly for 18 months: 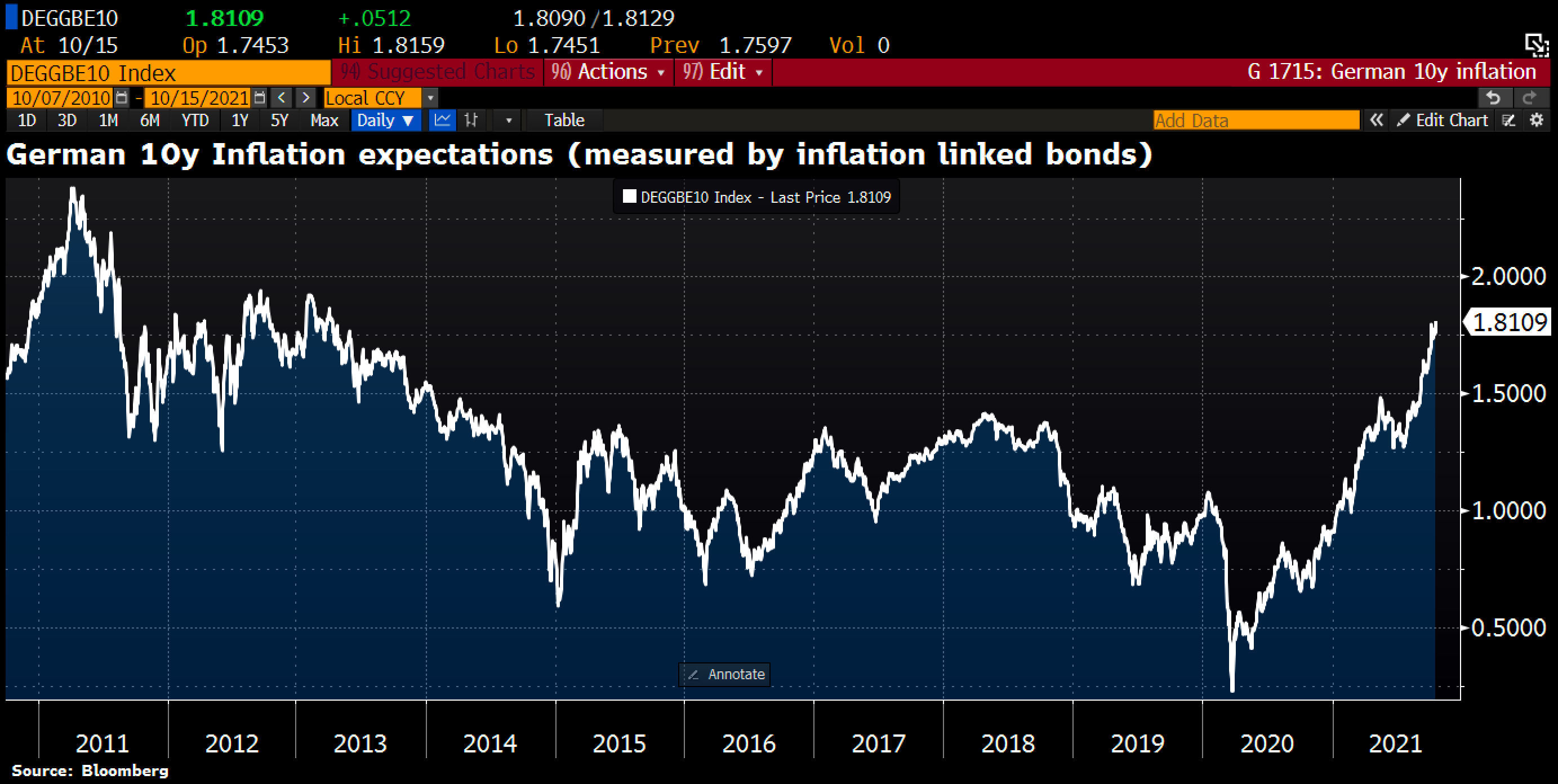 By taking refuge in denial, the Fed is running the risk of one day seeing the brutal realization of how it has failed to contain an inflation that is out of control.

The Fed is being “challenged” by this inflationary shock. This test is unfolding against a delicate backdrop whereby key members and decision-makers at the Fed are being forced to justify the trades carried out from their personal accounts, with timings that allow one to glimpse the possibility that insider trading may have taken place.

Following Kaplan, Rosenberg, and Clarida, it is the turn of the Chairman of the Fed, Jerome Powell, to be heckled this week: the newspaper “The American Prospect” is publishing a disclosure regarding the Chairman of the Fed’s trades of stock, in which we learn that Mr. Powell holds, inter alia, a sum of money that is somewhere between $5 million and $25 million on an ETF that is linked to the SP500, and therefore very sensitive to the direction of the markets…which are interlinked with his own decisions about the rates!

We also learn that Mr. Powell sold several ETFs (such as the Vanguard Total Stock Market - VTI) linked to the performance of the U.S. Stock exchange a few days before a brutal correction to the markets.

What makes matters even more serious is that at the time of the Clarida affair a few days ago, the Chairman tried to put out the fire by taking up a detached and “ethical” stance when faced with the suspicions of abuse of the market, which he appeared to be hearing about for the first time at that point. It doubtless did not occur to Jerome Powell that he too would be caught up in a leak of his trades to the press.

Against this backdrop of uncertainty about the Fed’s ability to gain control over the risk inflicted by the unprecedented inflationary shock, we are seeing increasing numbers of investors take refuge in physical gold.

Withdrawals of physical gold on the Shanghai market reached almost 200 tonnes in September, their highest level since March 2019. 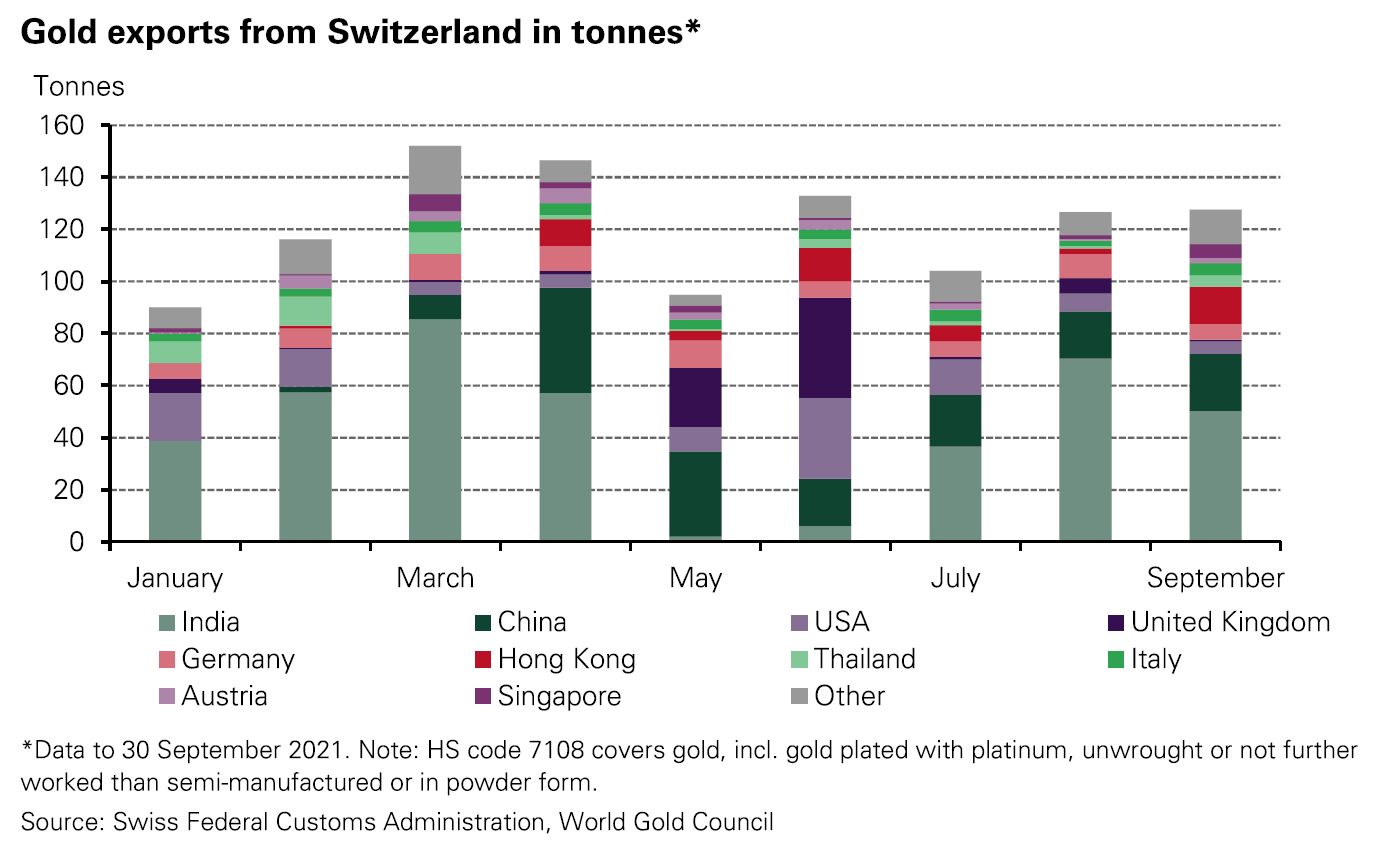 For the time being, gold is still under the futures markets’ control. Silver is resisting a little less than gold to bullish pressure on account of what is happening in the metals market.

Sooner or later, silver is going to experience the same catching-up that copper is going through today. The situation on the stocks is very tense as well; the silver futures markets are even more speculative (due to a leverage effect that has no equivalent on the futures market)...and the silver resources are even weaker by comparison with the other metals!

On the charts, the silver/gold ratio is moving back up again after having reached the regression threshold of 61.8% from the most recent upward leg. The strong correction to this ratio observed this summer has ended and the MACD and RSI indicators are on the brink of a downturn. 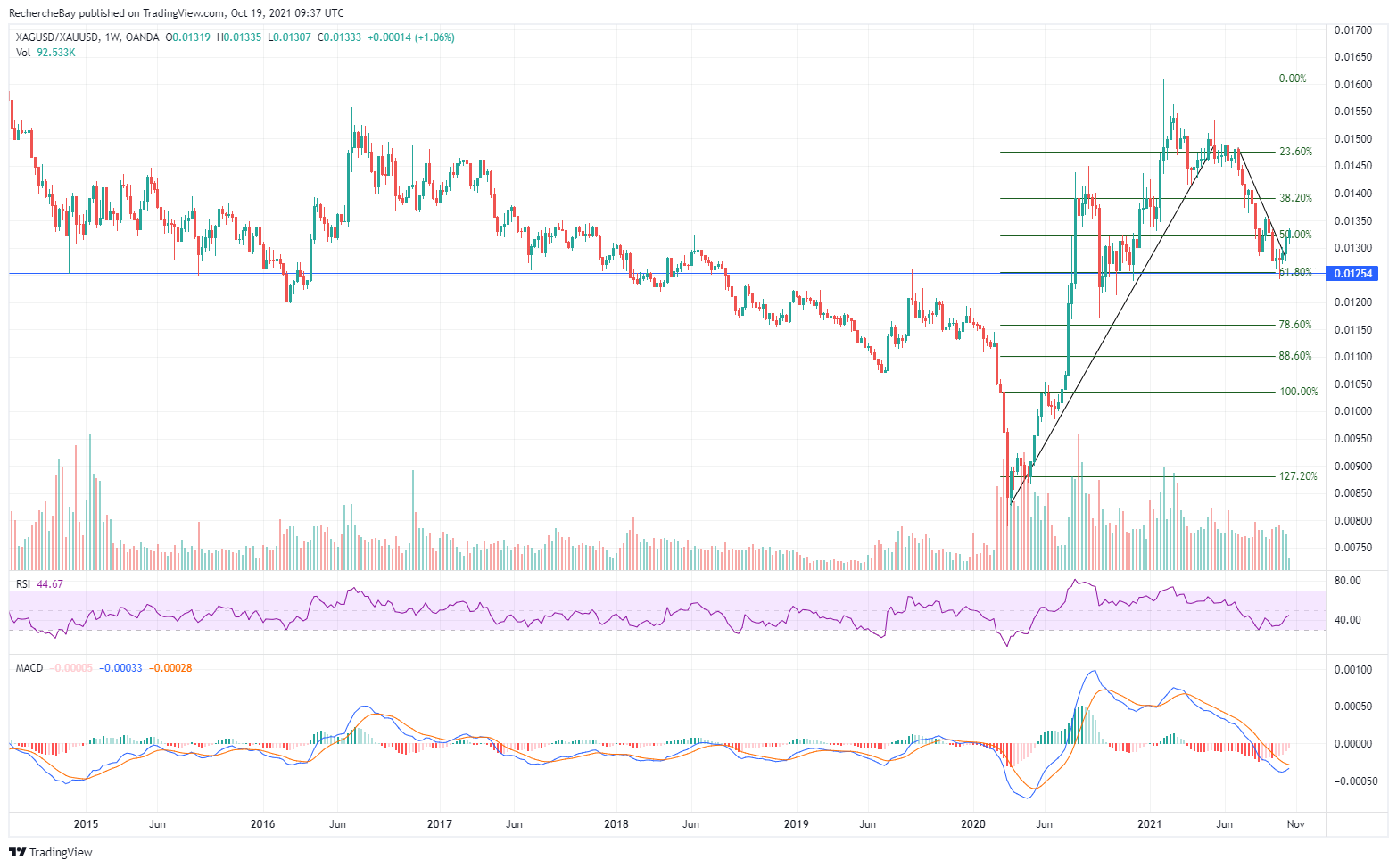 This resurgence on the part of silver is being accompanied by a recovery in certain mining stocks for producers, notably Australian seniors, which are starting to outperform the metals department. In the industrial metals department, despite the continuous rise in the price of metals, BHP has been sold for several days, in expectation of a slowing down of Chinese activity. NewCrest is not taking part in this sale on the Australian mining stocks, anticipating a general bounce-back by the depreciated sector of producers of precious metals.

It is the Mid-Tier department that is benefiting even more from the situation, though. Some dossiers are in the process of making up spectacular amounts of ground in terms of their valuations.

As for the juniors sector, it is still very quiet, offering good opportunities to accumulate stock.