After the Kaplan scandal, the Fed is fighting against another case of suspected insider trading this week.

This time, the case concerns the trades made by the vice-president of the U.S. central bank, Richard Clarida. Clarida traded millions of dollars out of a bond fund into stock funds one day before Chair Jerome Powell issued a statement flagging possible policy action as the pandemic worsened, his 2020 financial disclosures show.

Kaplan, Rosenberg, Clarida…the scandals are coming thick and fast… Yesterday, Elisabeth Warren, the senator from Massachussetts, called on the markets authority, the SEC, to investigate whether stock transactions by top Federal Reserve officials violated insider trading rules. Two of these top officials already resigned in the wake of revelations about their financial trading.

It is in the midst of this unprecedented crisis of confidence that the Fed is waiting on the decision regarding the renewal of its mandate. When Janet Yellen, the secretary of the Treasury and former chair of the Fed, is asked whether she supports her successor, she opts to kick the question into the long grass by deferring to whatever President Biden decides. Mrs Yellen’s attention is focused on the lifting of the debt ceiling, negotiations over which are taking place as normal, in a dramatic climate.

The climate is thus deteriorating on the part of the U.S. monetary authorities, at a time when the prospects for growth are starting to slumber again. Expectations for GDP for the third quarter are only at 2.1% now, a long way from the two-figure forecasts that were being made last spring. 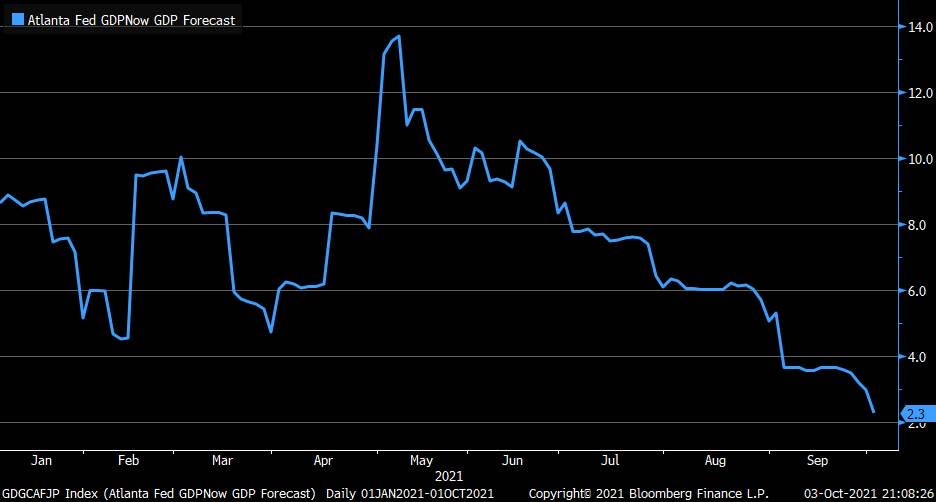 Increasing numbers of businesses are affected by the rise in the prices of commodities and shipping costs, and by the slowing down of the supply chains.

Honoring a contract signed more than six months ago with weekly late performance penalties is now an almost impossible task, irrespective of industry sector or the location of the contract. The current situation means that there is a direct and immediate threat hanging over the very survival of a chain of industrial co-contractors all over the world.

The monetary policies and governments have created an artificial shock to demand, in a situation where the supply was, and continues to be, heavily affected by the consequences of the sanitary crisis.

Obviously, the same people who took these decisions will tell you today that the current shortages and price rises are in no way their fault.

The Fed has increased its balance sheet by 100% in barely 18 months, increasing it from $4 trillion in late 2019 to almost $9 trillion today. At the same time, the Fed, which has abandoned its 0% rates during this period of monetary madness, has just defended the idea that it is the problems in the supply chain that are behind the increase in prices.

The INSEE defines inflation as “the loss of purchasing power of the currency that results in a general and sustained increase in prices”. It is precisely this monetary expansion that is the primary cause of the rise in prices and the problems seen in the supply chain.

In Europe, the same monetary policies are having the same results.

The ECB is printing more and more money, making the value of assets, including those associated with property, skyrocket... 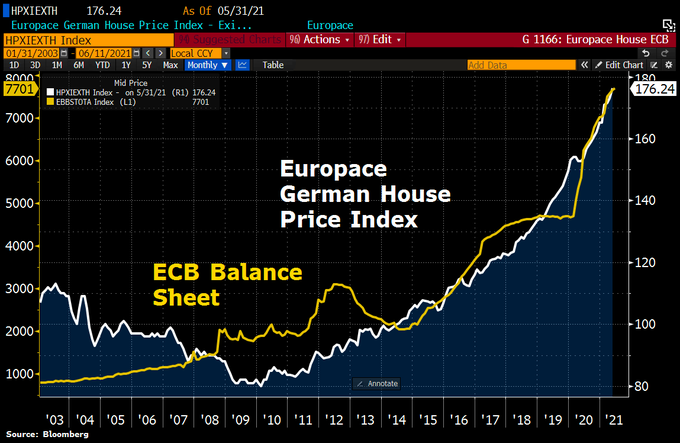 The ECB is maintaining rates that are making the interest on savings plummet to increasingly negative yields: 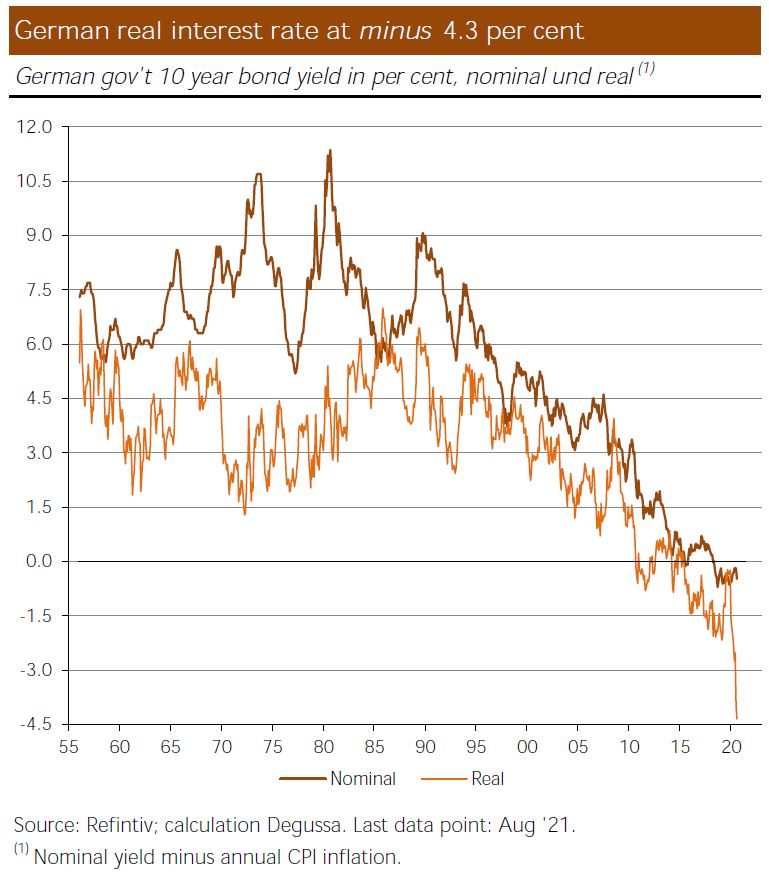 The effect on the rise of inflation is already very tangible. The rise in the prices paid by producers is taking off, and this week, it is the prices paid by the consumer (the CPI index) that are soaring. This is the classic model for how the inflationary cycle plays out. First we see a rise in the PPI index, then it is transmitted to the CPI... 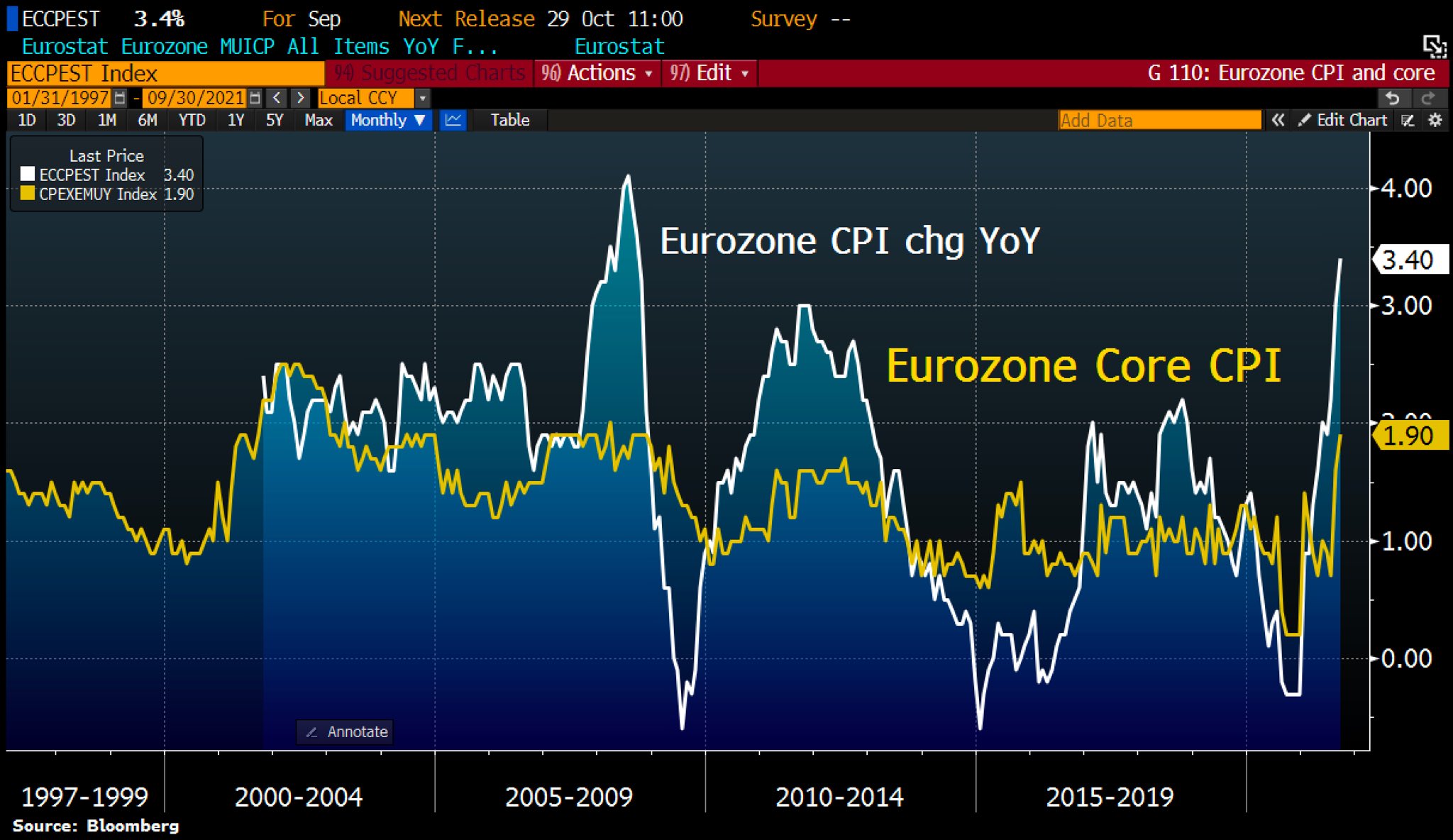 The third stage concerns the rise in wages, of which there has been little sign thus far in Europe, but which is increasingly evident in the United States.

The labor shortages, associated primarily with the sudden rise in the cost of living (and thus in the CPI index), are causing an immediate response in the form of a rise in wages...which is in the process of busting, once and for all, the myth that the inflation in the USA will be transitory. When wages are impacted, inflation becomes firmly established. The Fed must act. And fast.

The only way to break the inflationary spiral that is threatening to put the brakes on growth would be for the central banks to stop the asset purchasing program in its tracks and engage in an aggressive program of rate hikes, as Volker did in the 1980s.

The situation is already urgent when one considers the disastrous consequences of the current blockage in the production chain. It is absolutely essential that the monetary authorities send a strong signal to counter the ravages of what is now out-of-control inflation.

A more measured decision, at this stage, would doubtless be insufficient.

By way of example, at the European level, as the Normura group explains, even if the ECB reduces its monthly asset purchasing program to $60 billion, that would still represent 85% of the worldwide volume of bond issuances. This will have no impact on the return to a free market and a veritable Price Discovery on bonds products.

Intervening on the futures market for commodities to sell short-term contracts and ban speculation on the purchases of these contracts, as China does, would have an impact in the immediate term but would not be enough to solve the underlying problem. There is too much liquidity chasing too little supply of coal, metals, agricultural commodities, qualified staff... The natural market forces are now demanding that these assets be paid for at fair value in relation to assets, whose prices have been inflated by the accommodating monetary policies of the last few years. 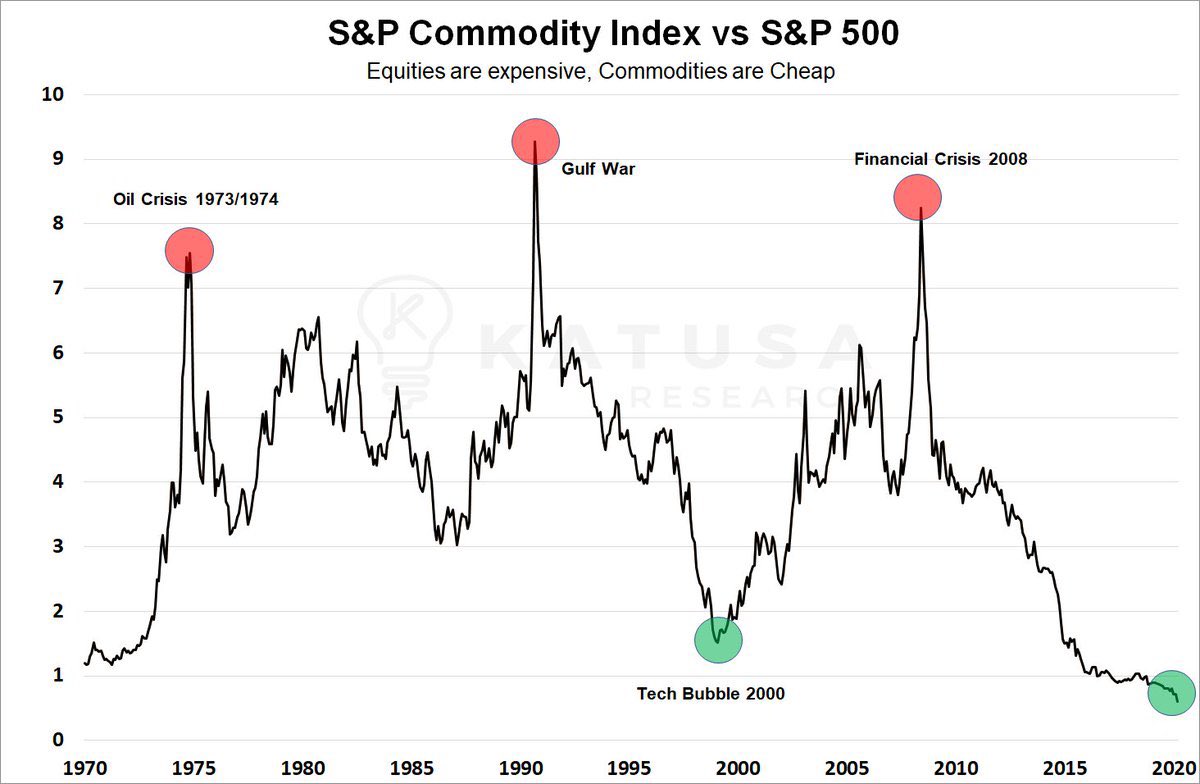 Attempts are being made to limit the real value of tangible assets, which have never been as cheap as they are now in relation to financial assets.

The sentiment on these financial assets is still at stratospheric levels.

Conversely, the sentiment on certain tangible assets is at its lowest. The confidence index for gold is at 10 (it is at 89 for the dollar!). It is even lower for silver (9) and platinum (9).

This optimism on the part of the markets is soon going to have to confront the reality of companies’ financial results and the expected downturn in U.S. consumption. Against such a backdrop, the task of safeguarding the level of financial assets is an increasingly perilous mission for the Fed, which is beginning, moreover, to face more and more questions about its initial task of controlling inflation.