Each passing week now brings a new figure on inflation which shows us that the price rise movement initiated this fall is becoming increasingly out of control.

Wholesale prices in Germany are up by more than 16.6% on last year. 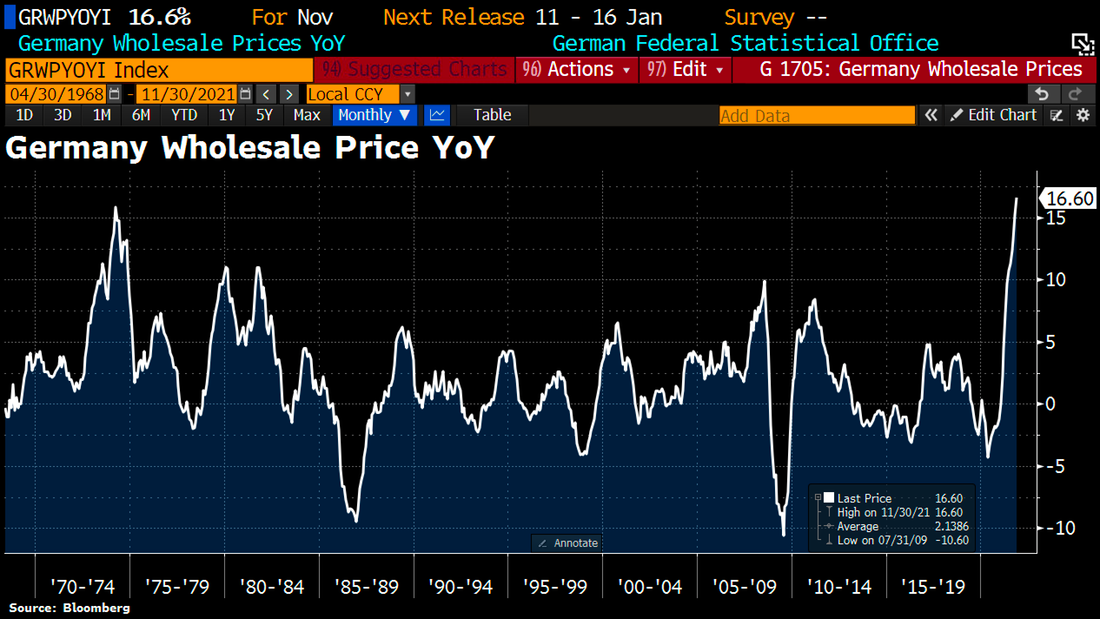 In the United States, after the CPI, it is now the PPI that is taking off via the effect of contagion, as we had anticipated in these articles.

Inflation is already at two figures in multiple sectors on both sides of the Atlantic, at a time when the central banks are continuing to leave their rates at 0% while pressing ahead with their asset purchasing programs. Even if the statements of Mr. Powell now allow us to glimpse the gradual stopping of these measures down the line (three rate hikes have been announced that are scheduled for 2022, as well as a faster than expected halting of the asset purchases), the question now is whether this will be sufficient to stem the inflationary wave we are facing. Good luck to anyone chasing after this particular hare!

Among the tools used by the central banks, sales on the futures markets are providing some temporary breathing space on the level of commodities prices, but the tension is now shifting to the available inventories level. While they have shown themselves to be effective as a way of controlling inflationary pressures in the past, the current context is rendering these tools far less effective.

Copper inventories are continuing their spectacular fall that began this summer. The current level suggests that there will be shortages as early as next year. 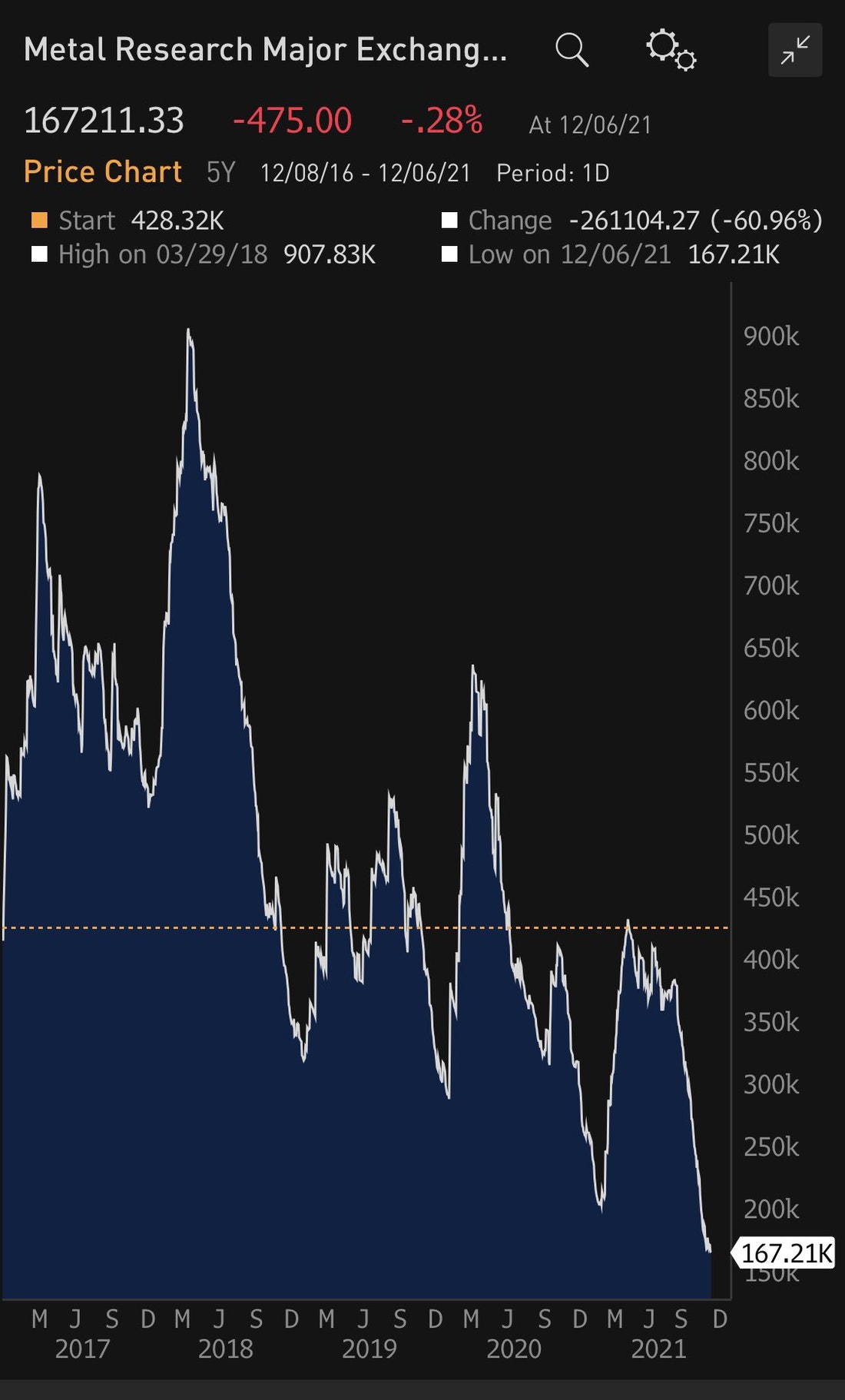 The shortages are affecting the entire production chain. New-vehicle inventories have collapsed in just a few months.

Automotive factory slowdowns have caused the dealerships to drawdown on inventory massively. pic.twitter.com/A6M9GPe1m9

This shortage is also affecting online sellers. The index of online trade actors is down dramatically, and this fall is being accompanied by a set of problems that are increasingly centered around the phenomena of inventory shortages. 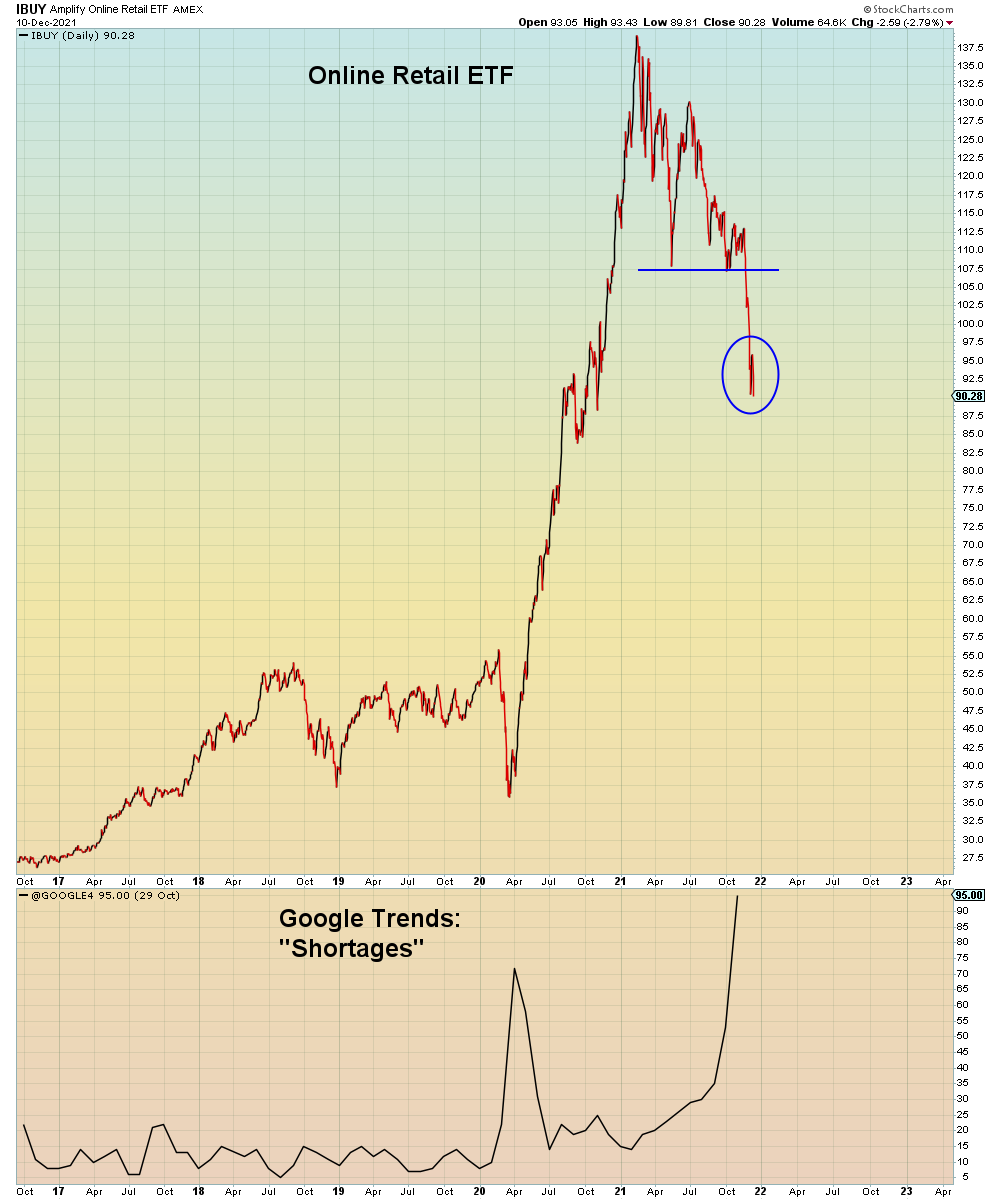 The shortages are primarily due to the blockage in the production chain. Waiting times at the port of Los Angeles are at a record high of 21 days, even as U.S. consumption has recovered wonderfully well over the last two months, sustained by a recovery in consumer credit...

While recent weeks had given people a degree of hope about a potential ebbing of inflation thanks to the sales triggered on the futures markets, the latest news on the commodities front is reinforcing the fears that the rise in prices will resume and be even more dramatic than before. Construction lumber prices are heading up again after the decline seen in the fall... 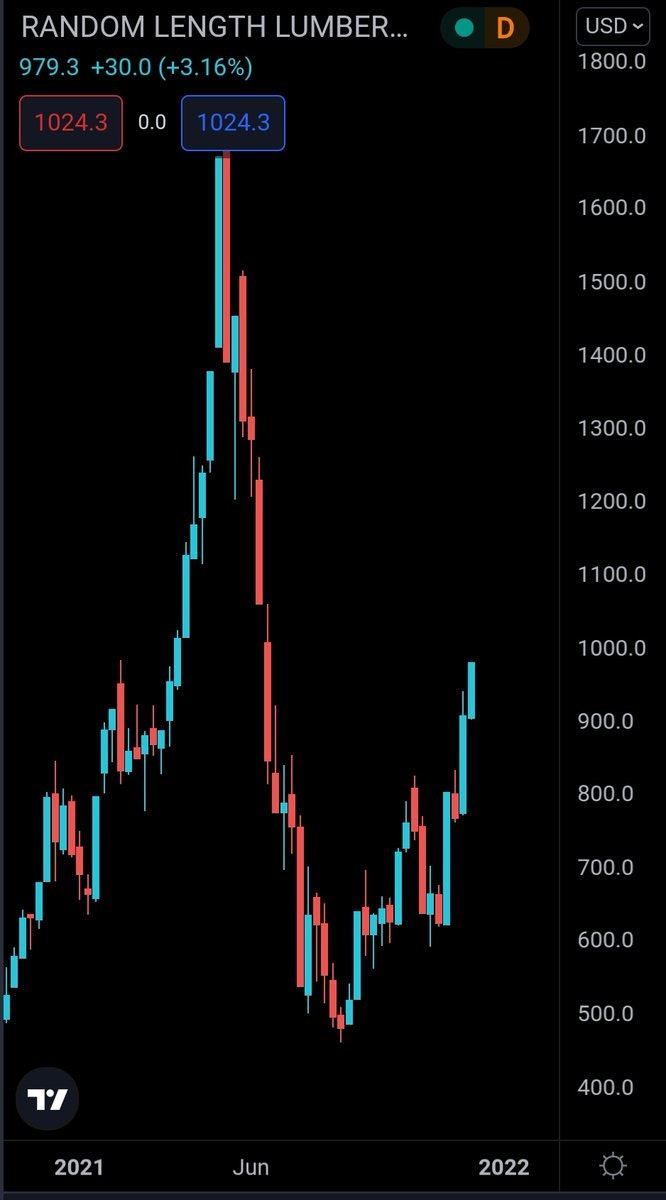 Natural gas prices in Europe are on the way up again: 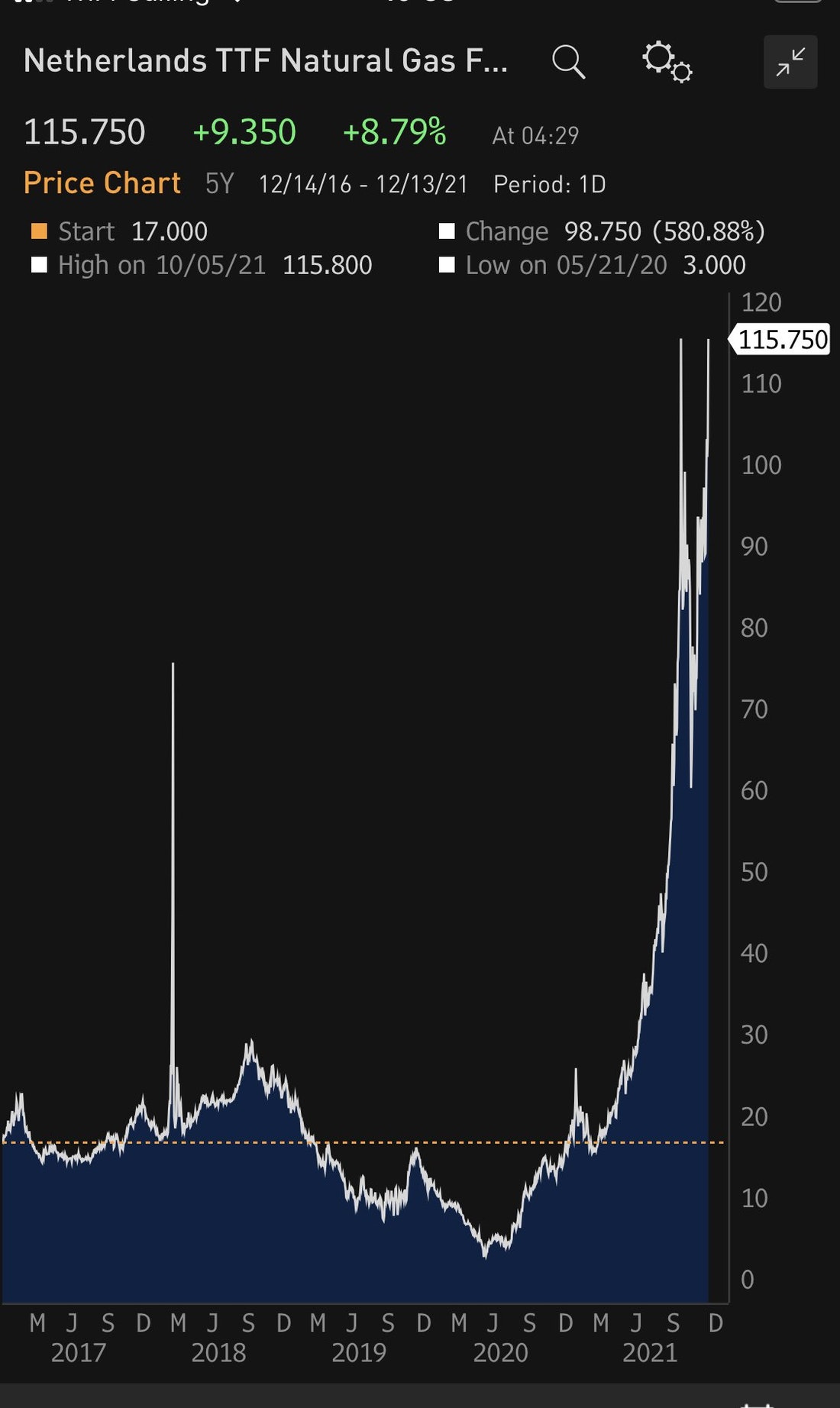 The increase in the prices of natural gas is having a direct impact on electricity prices, which have reached an all-time high in Europe, with France setting a record on 15 December of almost €350 / Mwh! 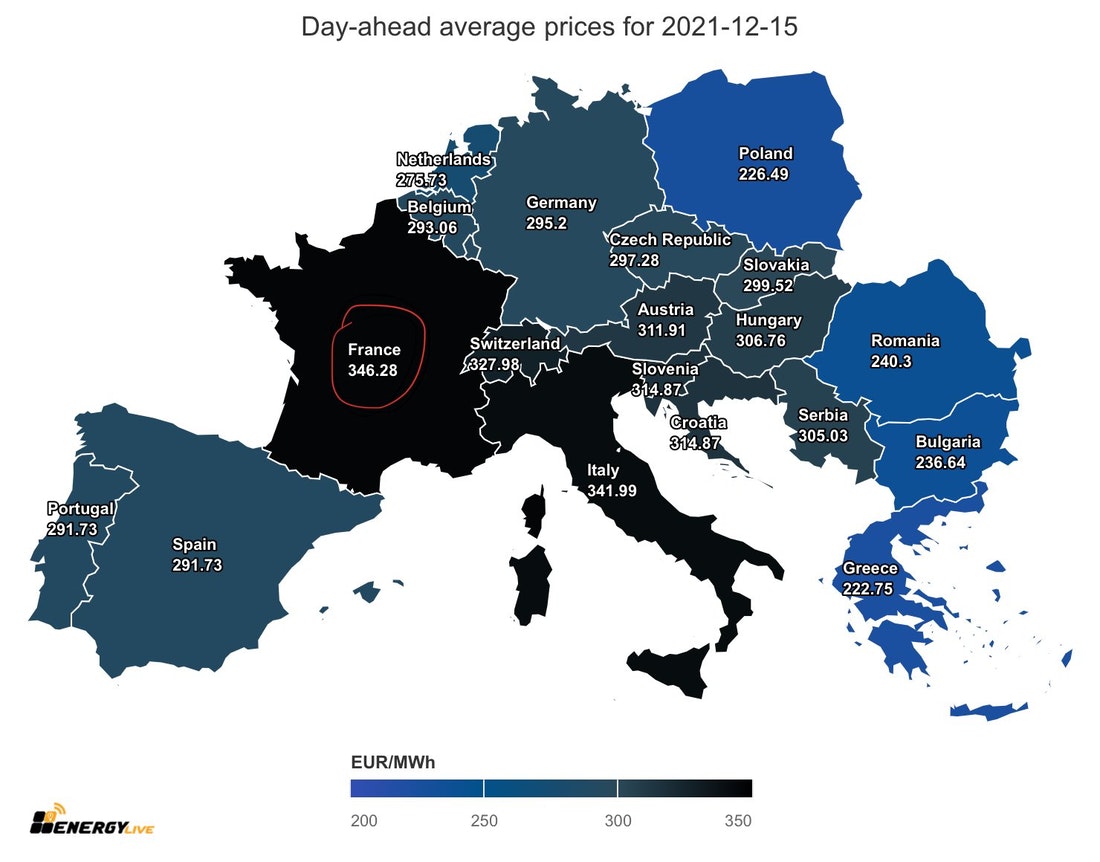 The European mechanism for setting electricity prices has therefore arrived at the following paradox: the country with the biggest fleet of nuclear power stations in Europe has the electricity price that is reacting the most to the rise in the price of natural gas and has to pay more for it than its neighbors! This mechanism, which prioritizes linking the price to gas resources, was put in place under British influence at the time when competition was opened up, and at a moment when the price of gas was very low. Today, France, cornered by this European regulation, is paying a high price for its electricity...whereas the Brits are in fact abandoning this mechanism for setting prices!

This rise in prices is a real problem for the initiatives put in place in order to decarbonize the European economy.

The rise in the price of lithium to levels never seen before is, for its part, making the efforts to bring about an energy transition more complicated. 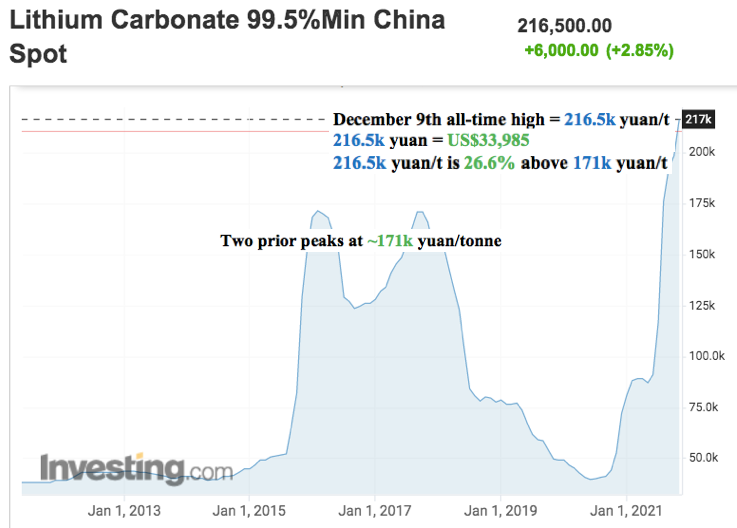 The inflation - caused in large part by the monetary and fiscal policies - is on course to derail Europe’s entire monetary and fiscal strategy, put in place in the context of the energy transition! What is the point of launching green bonds in such an environment, with prices that are increasingly unaffordable? 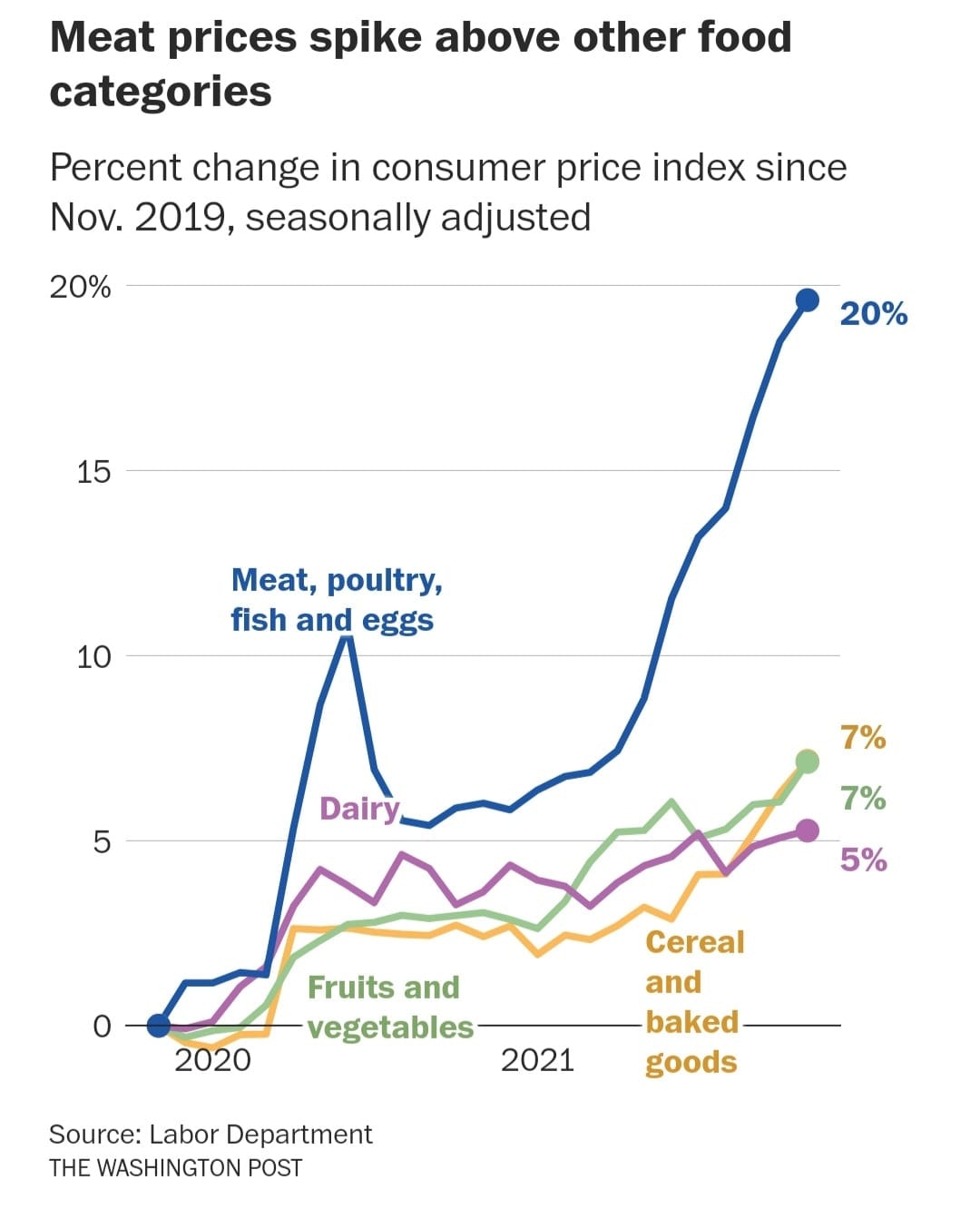 As a logical consequence of the forthcoming rise in the food prices, the rush on agricultural land is growing larger in Australia, according to this article in the Guardian. The newspaper explains that the speculation on land is emptying the Australian countryside of its farmers, and this is ramping up the pressure on agricultural prices even more.

The rise in the price of agricultural fertilizers is taking place against an unusual political backdrop, meanwhile: China and Russia are now in a dominant position in the supply chain for nitrogen fertilizers: 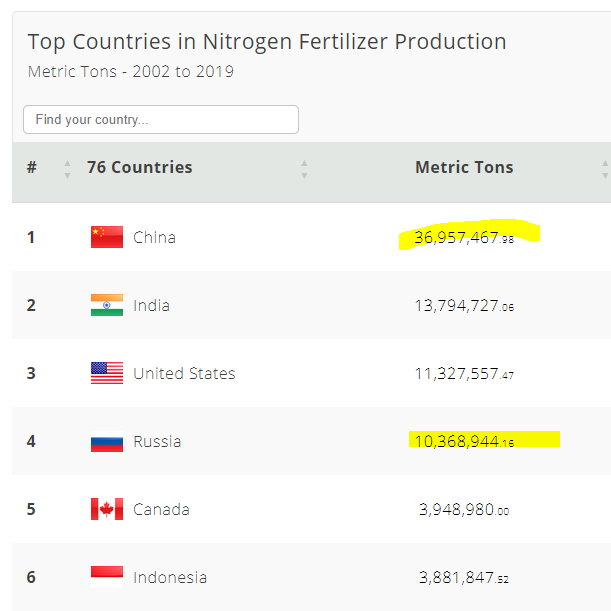 The two countries share almost 30% of the production of fertilizers, and they have just announced that they will be bringing their exports to an abrupt halt in order to preserve their domestic market. This is, of course, having an impact on the continuing rise...

This predominance on the part of China on essential commodities is even more accentuated in the sector of the metals required for the energy transition, which, for the most part, undergo the entire refinement process in that country. 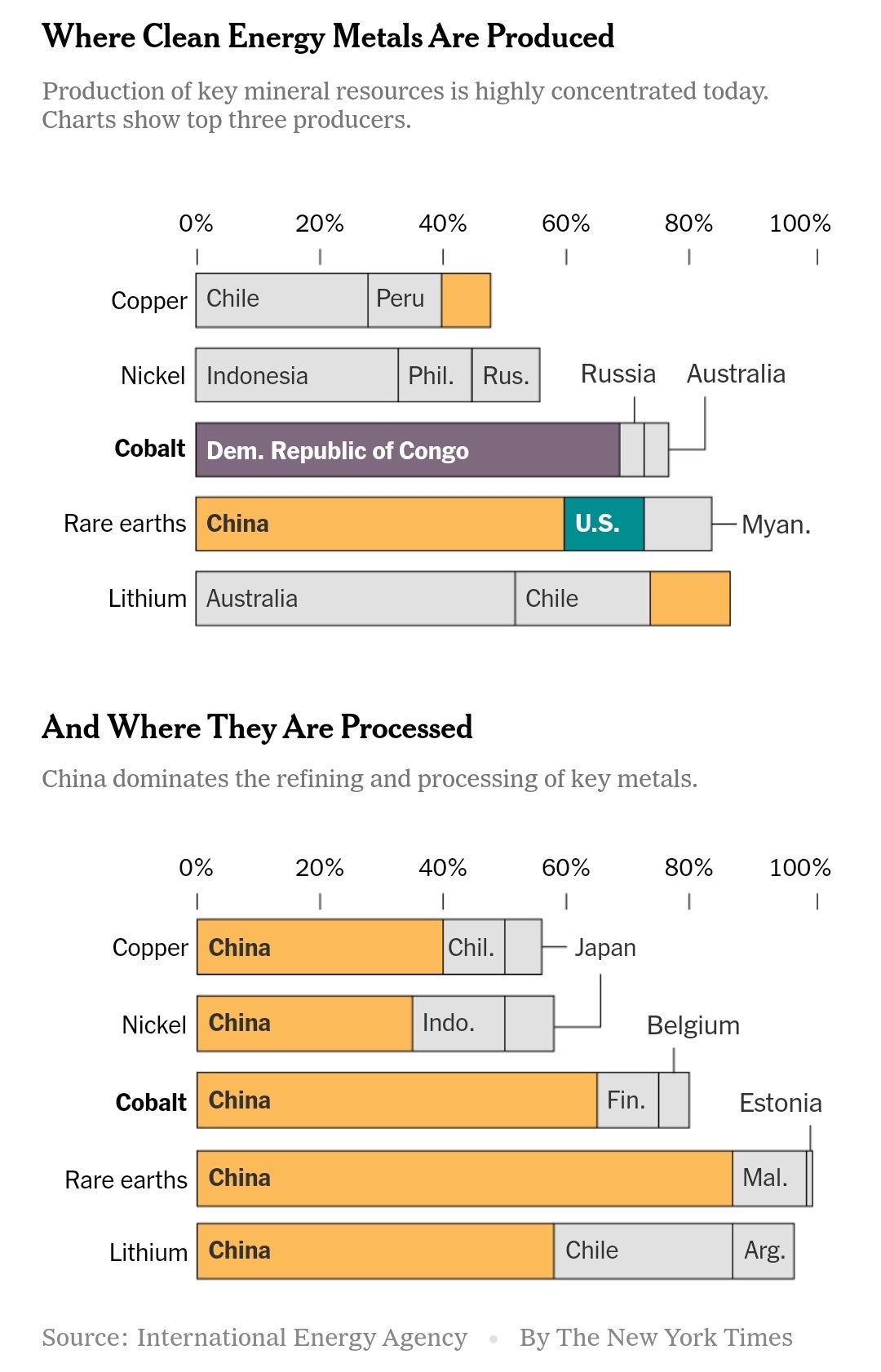 When we talk about the ecological transition, we have to keep in mind the origin and location of the transformation of the metals required for this green revolution.

An electric vehicle requires, for instance, six times more of these key metals than a thermal vehicle. A model 3 Tesla ‘consumes’ 56 kilos of nickel, 7 kilos of cobalt, 6.6 kilos of manganese and 85 kilos of copper. All-electric cars would require 40 times more lithium and nickel production, and 20 times more copper, cobalt and manganese production than we have today...

The problem: we do not have these metals in stock. And the extraction of them requires us to resume our investments in the mining sector...something that is far from being the case right now. If anything, the reverse is happening! Capital is fleeing the sector, because, for numerous funds, extraction by mining is incompatible with a strategy of eco-responsible investment aimed at protecting the environment...which we are trying to save by switching to all-electric vehicles!

While the West gets bogged down in environmental paradoxes, China is moving its pawns forward and snacking, its hands placed on the resources necessary for its future economy.

China’s control of commodities is in the process of extending to precious metals. This is particularly true of gold: deliveries on the Shanghai market (the SGE) reached almost 160 tons in November, a rise of 16% on the previous month. Deliveries of gold bullion have reached almost 1600 tons since the start of the year in China, and we are heading for a record year in terms of the delivery of gold since the creation of the SGE. This movement is at risk of accelerating if the correction phase for the gold futures markets continues.

While people in the West have fun ‘playing’ on the derivatives markets with each upward or downward movement in the price levels, China is going through the gears and has its hand placed firmly on the resources and on the real currencies. 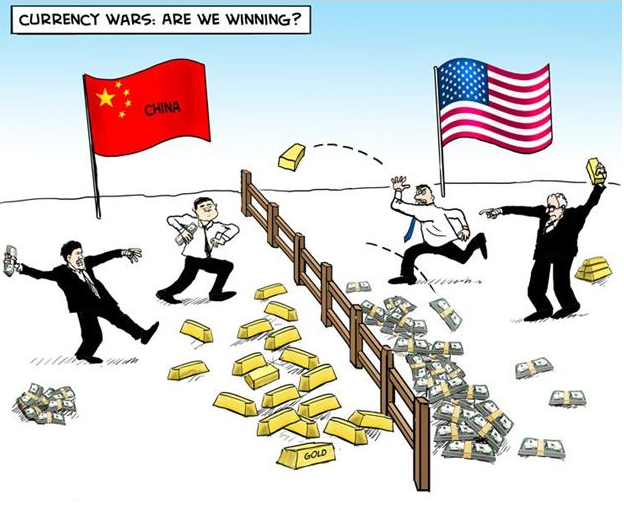 It is in precisely these conditions that the Russians are seeking to put in place a new electronic currency for their trades with China. Besides the situation in Ukraine, the current geopolitical contortions between Russia and the United States are perhaps also linked to this tension at the level of resources and the place of currencies in the new world order.