With the implementation of Basel III rules, we expected volatility on the precious metals market. The raid in early August was closely linked to this event.

This raid by bankers particularly focused on gold, primarily to unwind Forex contracts, where the dollar was hedged against gold. As this gold is “unallocated” and therefore purely virtual, it was essential to close these contracts as soon as possible. Bankers took advantage of deserted markets during the summer holidays to launch their bearish attack. The usual maneuver, consisting in putting pressure on the levels where the speculators had placed their "stop-losses", was enough to force them to sell their long positions, triggering a sudden drop in cascade, far below the actual price of the physical metal on the wholesale market.

Silver in the futures market followed this decline despite an attack with a rather low volume of 39 Moz.

Andrew Maguire compares the effects of this raid to that of March 2020, which completely destabilized the Exchange For Physical (EFP) system between the COMEX in New York and the LBMA in London.

The backfire of this raid should have dramatic effects in the next two months.

This summer, for the first time in history, refiners took advantage of slashed COMEX prices to buy futures contracts below market prices to be able to fulfil their clients' orders.

It's the world upside down!

Usually, it is the refiners who supply the markets in New York and London with physical. But this summer, as this raid on "paper" brought gold and silver far below the real prices of the physical metal, refiners have made their market and are preparing to rob existing physical stocks by asking for delivery in London and New York, to meet the demand of bankers.

This will be the case for gold, but it will be even more true for silver.

Maguire says Russian refiners have collapsed with orders for 1000-ounce bars at $23 an ounce of silver. The stocks of refiners in Russia have been emptied. And it's probably the same all over the world. Insiders and banks have gorged themselves on physical because they know the Gold/Silver ratio is set to drop very sharply. Andrew Maguire says this ratio should be close to 1/32 next January. When Basel III will be into effect around the world at the end of the year, he expects gold to be between $2,300 and $2,500 and he dares to say that "in January, silver should be close to $70."

In the shorter term, Andrew Maguire considers that September will bring a violent rally in silver. The first step of which should bring silver between $35 and $40 on New York futures contracts.

While the Gold/Silver price ratio on COMEX futures is currently 1/76, the US Mint Gold and Silver sales Ratio is 1/27.

If the US Mint ratio applied to the price per ounce on COMEX, the silver ounce would currently be at $67.

Very surprisingly, today this is exactly the selling price of the one ounce Silver Eagle on the US Mint website.

Today is the end of the current COMEX contract: 5,528 contracts require delivery, or 27.6 Moz.

The graph below dates from August 30.

As we can see, SLV continues to see its stocks fall and those of the COMEX as well.

This drop should be much more violent over the next two months, due to the delivery requests from the refiners. 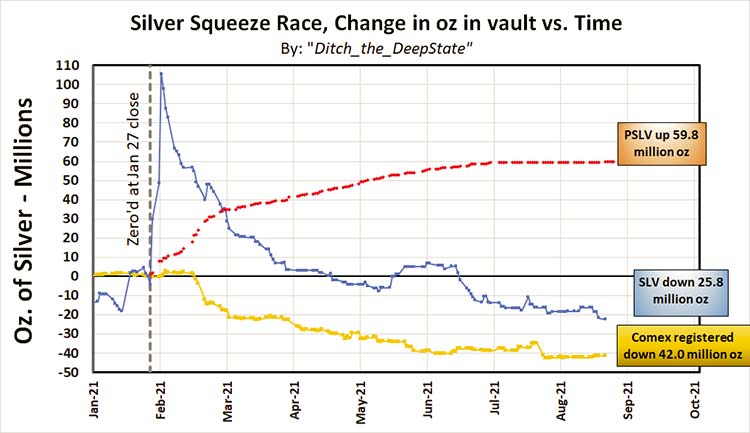 Registered COMEX silver stocks have lost 42 Moz since the start of the WallStreetSilver attack at the end of January 2021. As of August 31, 2021, there are only 107 Moz left for sale (registered) in the COMEX warehouses.

Since March 2020, the New York market has been obliged to deliver physical supplies and therefore to restock all over the world (Russia, Korea, Kazakhstan, etc.) without ever having succeeded in compensating for the massive outflows of silver from its stocks, because of the physical buying campaign of the small traders called the WallStreetSilver. These are now 128,381 members, twice as many as in March. As soon as silver prices begin to rally up, they will likely be joined by some of the 11 million WallStreetBets traders who are playing the "momentum" (the trend).

Year-to-date sales of gold coins by the US Mint have already surpassed those for the whole of 2020. 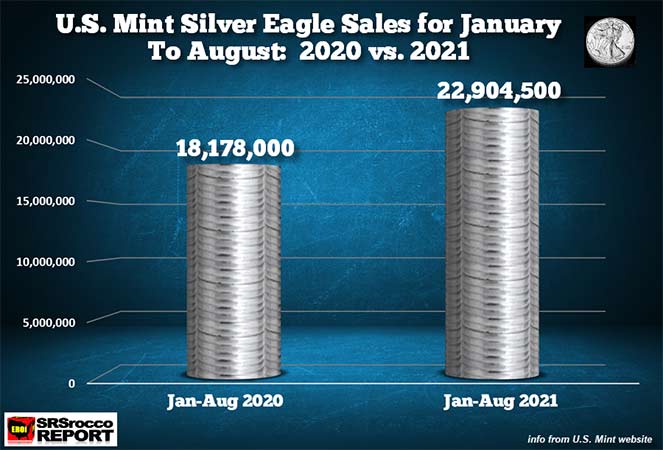 In his August 31 analysis, Steve San Angelo reveals that physical prices are still $ 10 above paper-silver prices.

The physical has not kept pace with the fluctuations of paper silver.

Graphically, silver is in a bearish channel. Prices are meeting resistance today. The 20-market Moving Average is now in support. 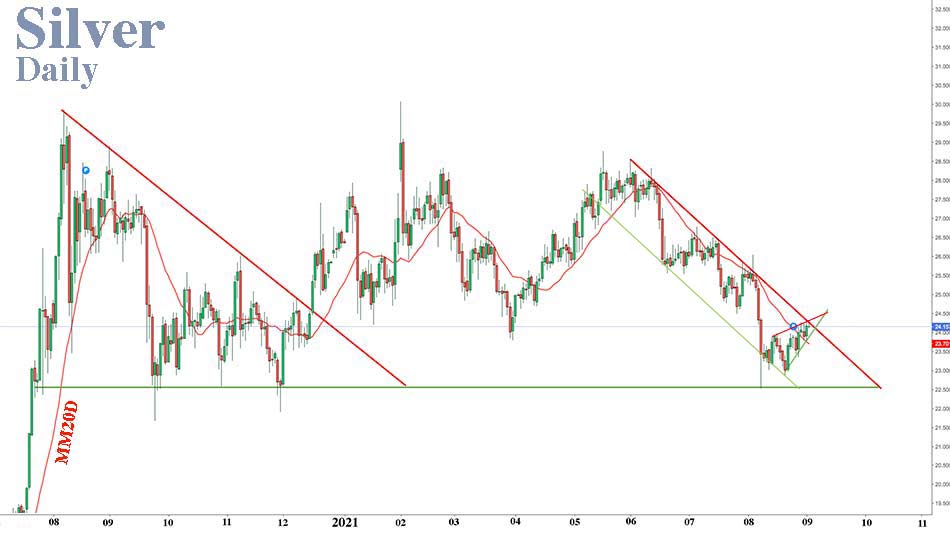 Statistically, over the past 37 years, July and August have been silver's weakest months before a multi-month bullish phase.

While silver is not immune to a final attack before the big hike, the conditions seem right for a take-off before the end of the month.

This is all the more true, when we look at the crazy surge of aluminium (X2), sheet steel (X4), coal (X4) and commodities, which are experiencing a very violent inflation. Given the crazy money creation since the start of 2020, the price of precious metals should be much higher.

It’s just a matter of a few months of patience to see our wishes finally come true.