The tensions identified in Forex seem to have dissipated: last Friday, the yen had soared before undergoing a sharp correction, probably triggered by the BoJ's intervention.

The cost of these interventions is between $30 and $50 billion. Since October 21, the BoJ has spent even more than it did during its last intervention campaign in late September.

Despite the massive amounts of money involved, the yen has still not been able to break its uptrend decisively. 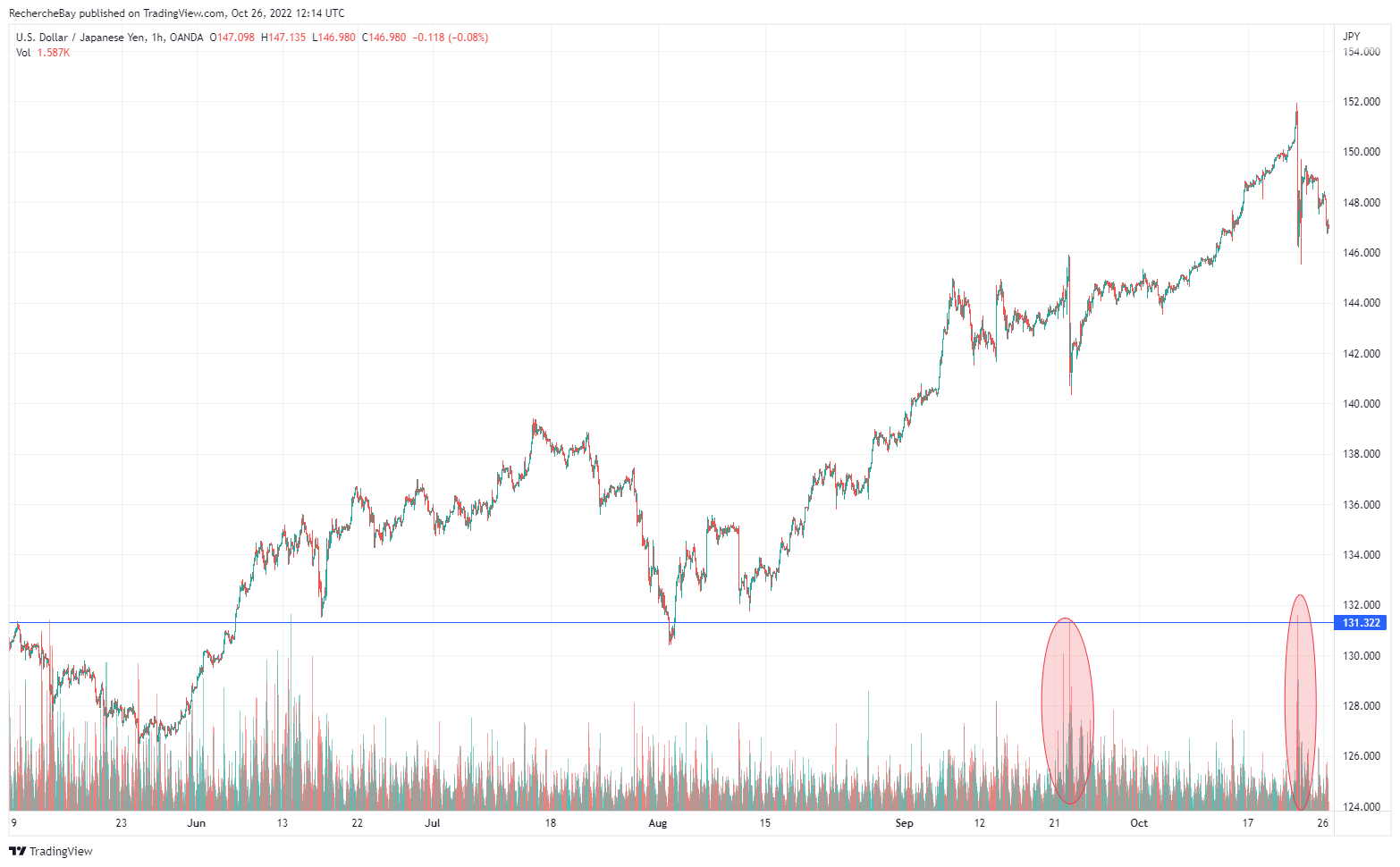 On October 26, Japan announced a new $454 billion stimulus package. An effort equivalent to the one deployed during the last financial crisis in 2008. This program is launched after the BoJ has already absorbed almost all the bonds issued by the government. The Japanese bond market is totally frozen, dependent on a single buyer. The monetization of the debt is total in the land of the rising sun.

It is as if the Japanese monetary and fiscal authorities had no choice: stopping the monetary policy started twenty years ago would collapse the whole Japanese financial system by removing the buyer of last resort. The only solution is to continue monetizing the debt, to calm the markets, at least in the short term.

So this week, the spotlight has shifted from Japan to China. We must follow! We are moving from one crisis to another. The black swans are becoming more and more numerous and are following each other more and more quickly!

At the beginning of the week, Chinese technology stocks collapsed: 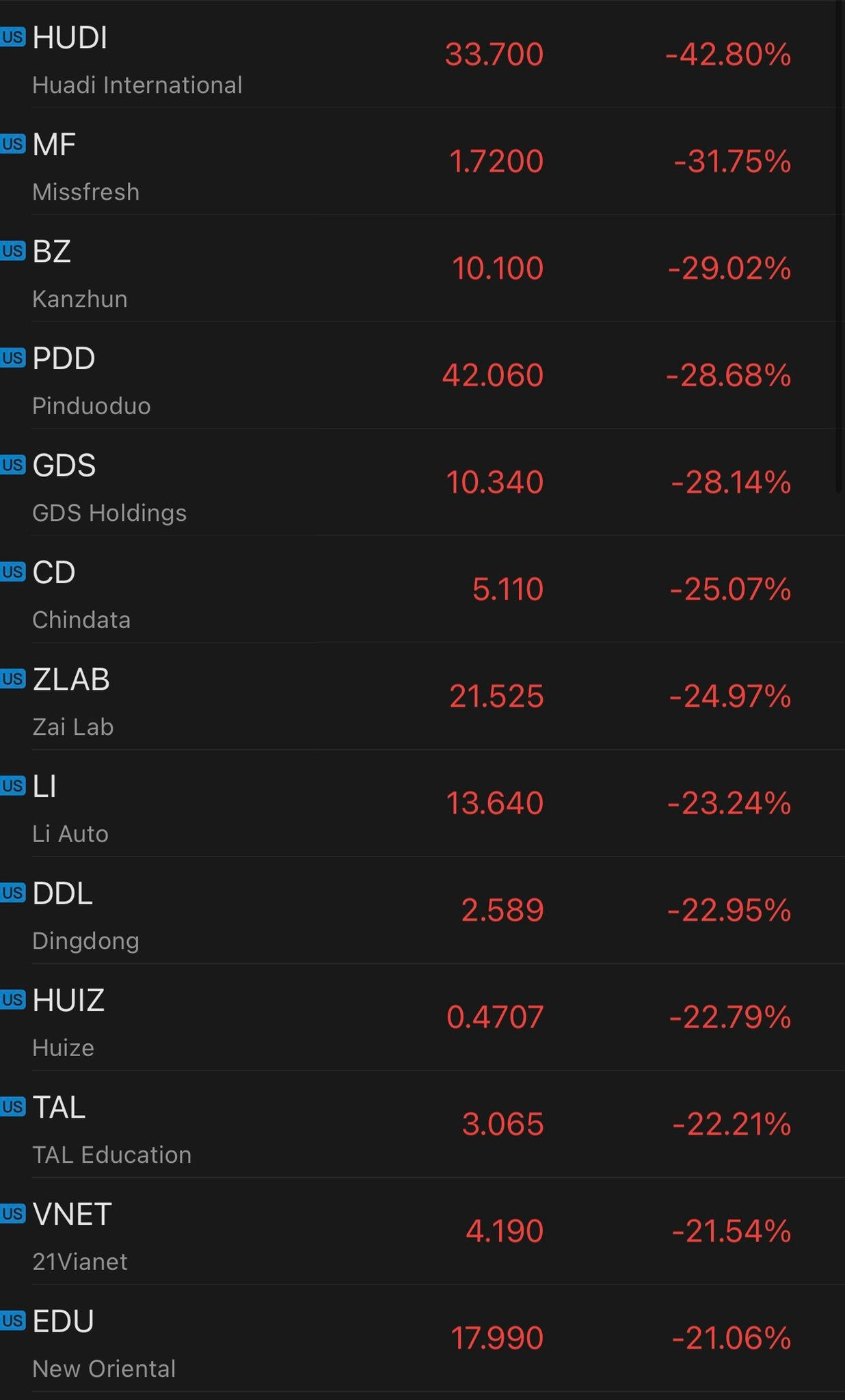 The move away from China follows the reshuffling of the Chinese government, which is seen as less trade-friendly with Western countries.

Another factor to consider when analyzing China's current situation is the salvo of U.S. sanctions against the entire Chinese semiconductor industry.

In early October, Washington announced drastic restrictions on its exports of microchips to the Middle Kingdom. The United States has also just tightened its export control rules. The aim is to further prevent China from manufacturing and buying its components. U.S. companies, as well as those working with the United States, are prohibited from trading with 31 Chinese companies. The latest sanctions prohibit any U.S. citizen from participating in the development, production or use of integrated circuits in a Chinese chip factory.

This technology war is taking its toll. Like many companies, YTMC, for example, has had to make emergency layoffs of a large part of its staff.

Let's not try to do geopolitics here: I have neither the skills nor the capacity to do so.

Let's just try to reason logically. Deprived of its strength in the semiconductor market, China could accelerate its plans to invade Taiwan. Since microprocessors are considered the oil of the 21st century, China has the opportunity to get its hands on a potential that is vital for its development, and this, 150 km from its coast.

In monetary terms, a geopolitical escalation involving China would have consequences for international trade and, above all, for the currencies used in this trade. It is hard to imagine the United States standing idly by in the event of an invasion of Taiwan. Financial sanctions are likely, similar to those imposed on Russia.

Are we on the verge of a complete de-dollarization of trade with China? In the event of a conflict with Taiwan, this crucial question must be asked. And perhaps even anticipate it.

The decline in demand for dollars in international trade would of course have consequences for the monetary value of gold.

Even if, for the moment, the role of gold in this monetary reconstruction is far from being discussed, the gold purchases of the BRICS central banks seem to anticipate a re-monetization of gold in the new monetary environment that is taking shape.

It is as if the BRICS were buying insurance to prepare for an eventual de-dollarization of trade with China, which remains- and will remain- their largest trading partner.

The situation is also likely to have significant repercussions for other metals.

Especially since, in a context of international tension, the US administration does not dither for long before deciding overnight who is no longer allowed to trade with which country in the world.

The executive order that President Biden has just signed against Daniel Ortega, head of the Nicaraguan state, is an example of American radicalization. This unprecedented decision explicitly prohibits American individuals from approving, financing or facilitating any transaction related to a gold mine in the country.

Mako Mining, which I have been following for two years, is a Canadian company with geologists operating with local partners. But the scope of the executive order is so broad that it threatens the continuity of the mine's operations. The stock has fallen by 50% on the stock market, and the other mining projects I have been following in the country have suffered much the same fate.

With the snap of a finger, a jurisdiction can go from "investable" to "non-investable". Daniel Ortega is obviously paying for his support to Putin, and the consequences of the American decision go far beyond the leader's own business.

But imagine what a conflict between China and Taiwan could do to other jurisdictions with vital trade with China. This is something to be taken very seriously when approaching the financing of a mining project.

Monetary revolution underway, change of approach on risk qualification of many jurisdictions. The world is changing fast and we must remain very vigilant in our approach as investors.

Real incomes are collapsing, especially in Europe. Look at the situation in the Netherlands, for example. On this graph, in green, inflation, in dark blue, the level of wages. The light blue curve represents the real level of wages resulting from the two data: 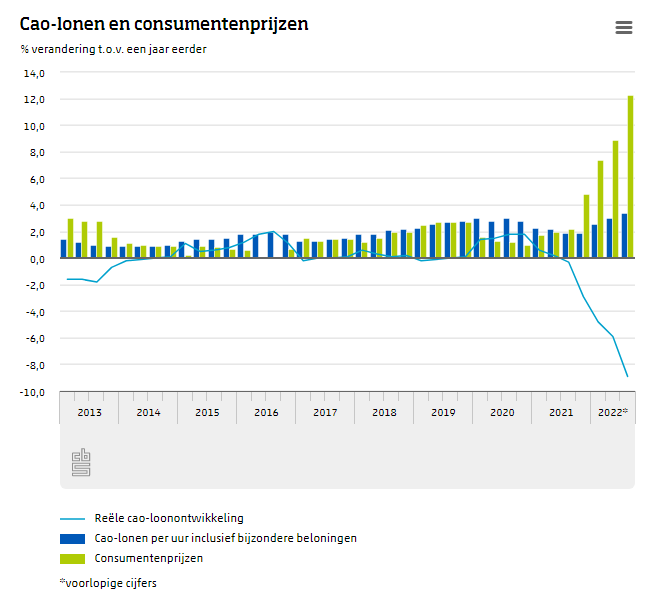 The Dutch earn 10% less than last year. We are seeing more or less the same level of impoverishment in Europe.

The Americans are doing better, as wages have risen more than here. 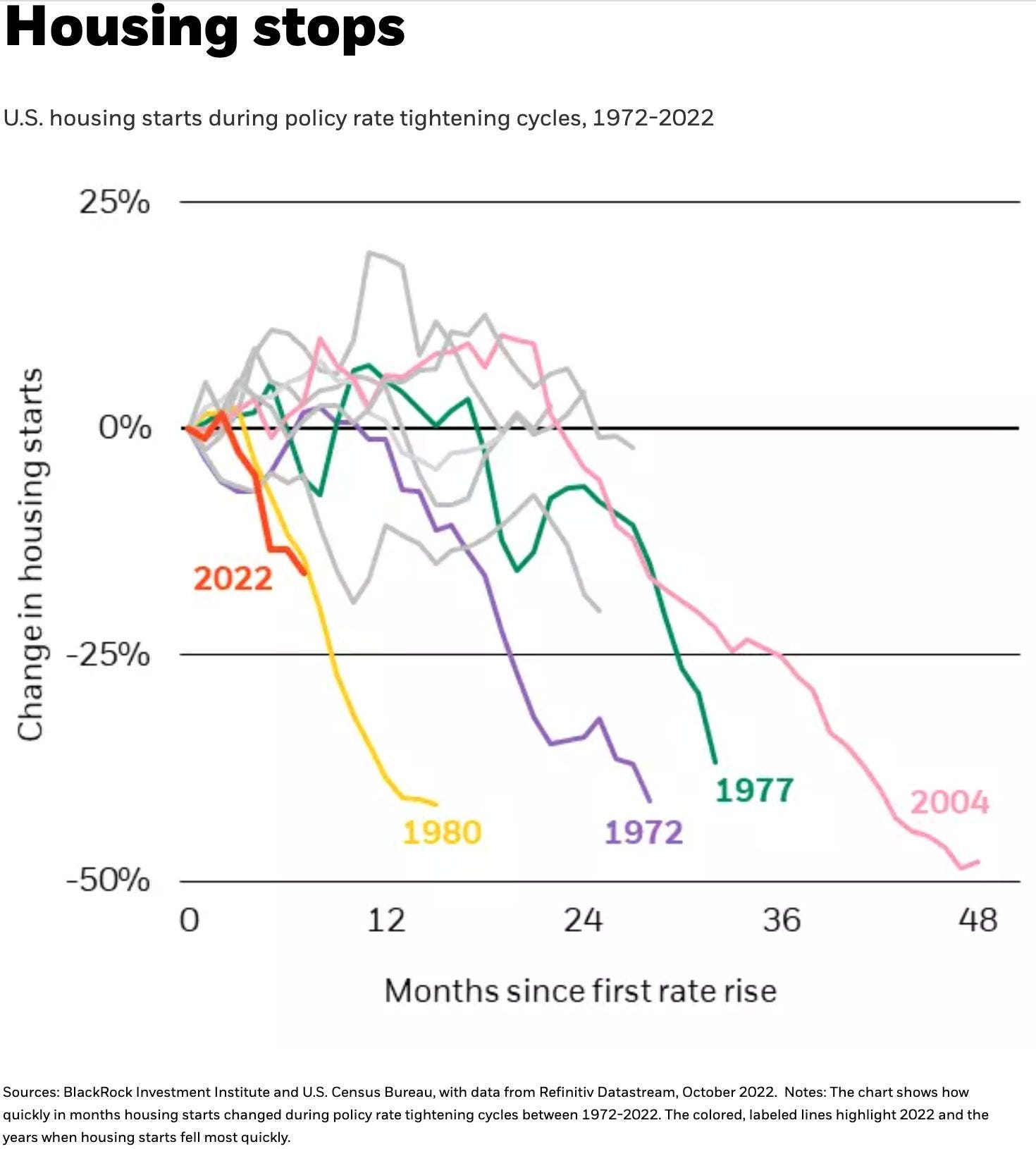 The number of new housing starts is collapsing, at an even faster pace than in previous rate hike cycles. Prices, meanwhile, are experiencing their largest monthly decline since 2008: 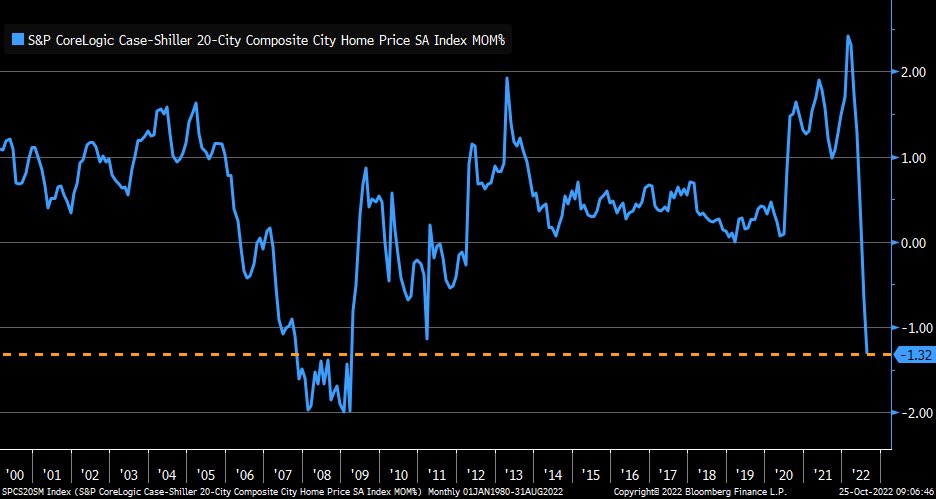 Given the importance of the residential market on the level of US consumption, it will now be very difficult to avoid a recession in 2023 in the US.

While the energy crisis seems to be less damaging than expected in the short term in Europe, these new dark clouds in the United States could be used as an argument to stop the rise of the dollar.

The DXY index has just broken a bullish support, but there is still a long way to go to break the uptrend started in 2021. 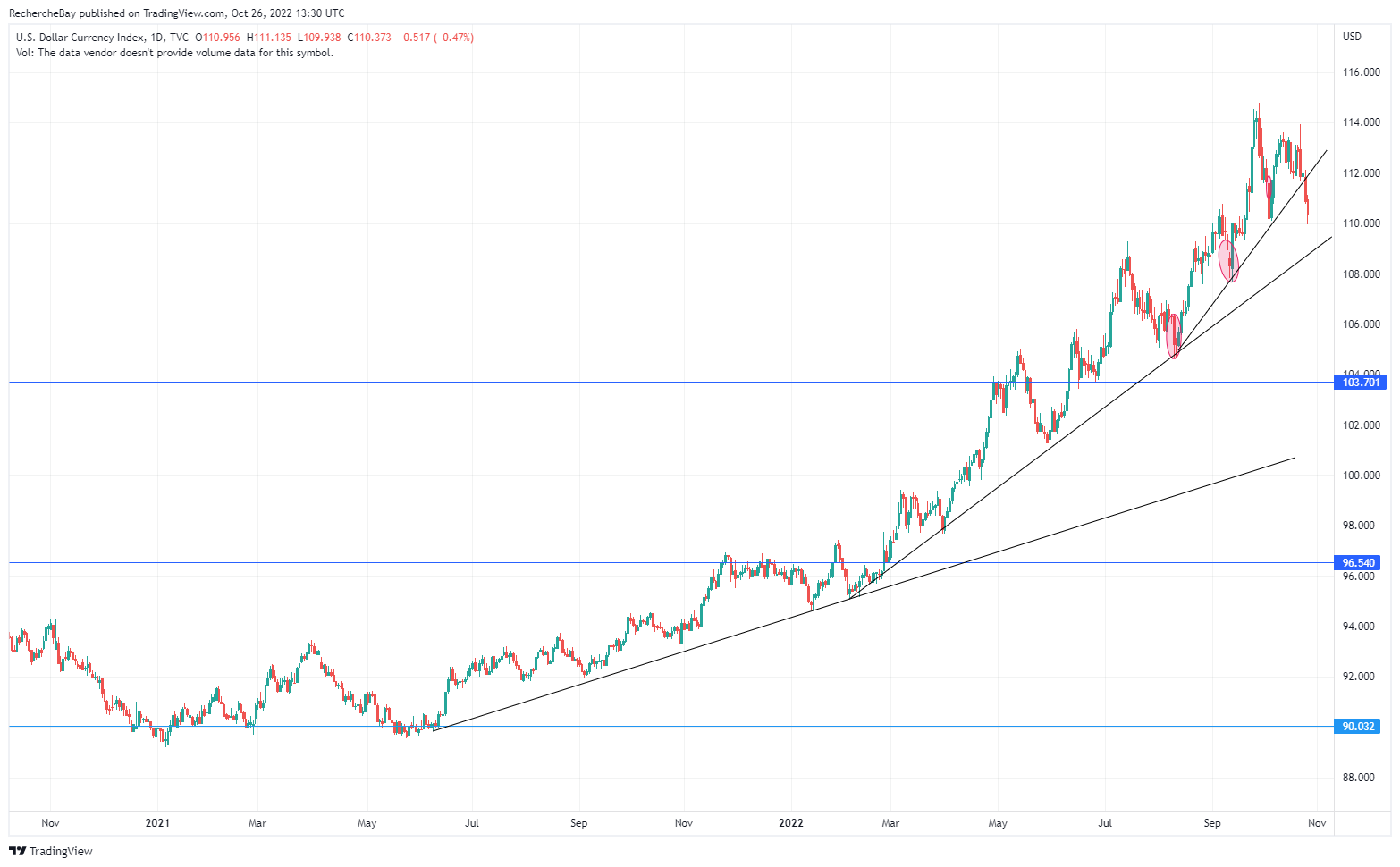 Gold is taking advantage of the dollar's decline to breathe a little. But here again, without a decisive break of $1,730, there is nothing to validate a change in trend. Gold is still around its annual lows in dollars, which is still contributing to the increase in purchases on the physical market.