After last week's sharp correction in precious metals, the movements of open interest positions in the futures markets give us an indication of the origin of the high volatility we have just experienced.

It is the managed money category that has seen its open interest decrease dramatically. This category is mainly made up of hedge funds, which have therefore suddenly reversed their positions in precious metals. I do not remember such a reversal in this category in such a short period of time. The net position in gold has decreased by more than 50%, and by more than 60% in silver!

So the Fed's announcements have succeeded in at least one thing: turning this category of investors from bullish to bearish in record time!

The bearish sentiment on gold continues to be sustained by most industry analysts.

The bearish forecasts on gold are following one another. Every day a new bearish analysis confirms the sentiment of this beginning of the year:

But it is extraordinary to see that this strongly bearish climate and this reversal of positioning by all these hedge funds have not had any impact on precious metal prices.

Graphically, gold's uptrend is still defended: the upper consolidation lines, as soon as they collide with this uptrend, are no longer sufficient to push prices down. Like last summer, this uptrend now determines the direction of prices: 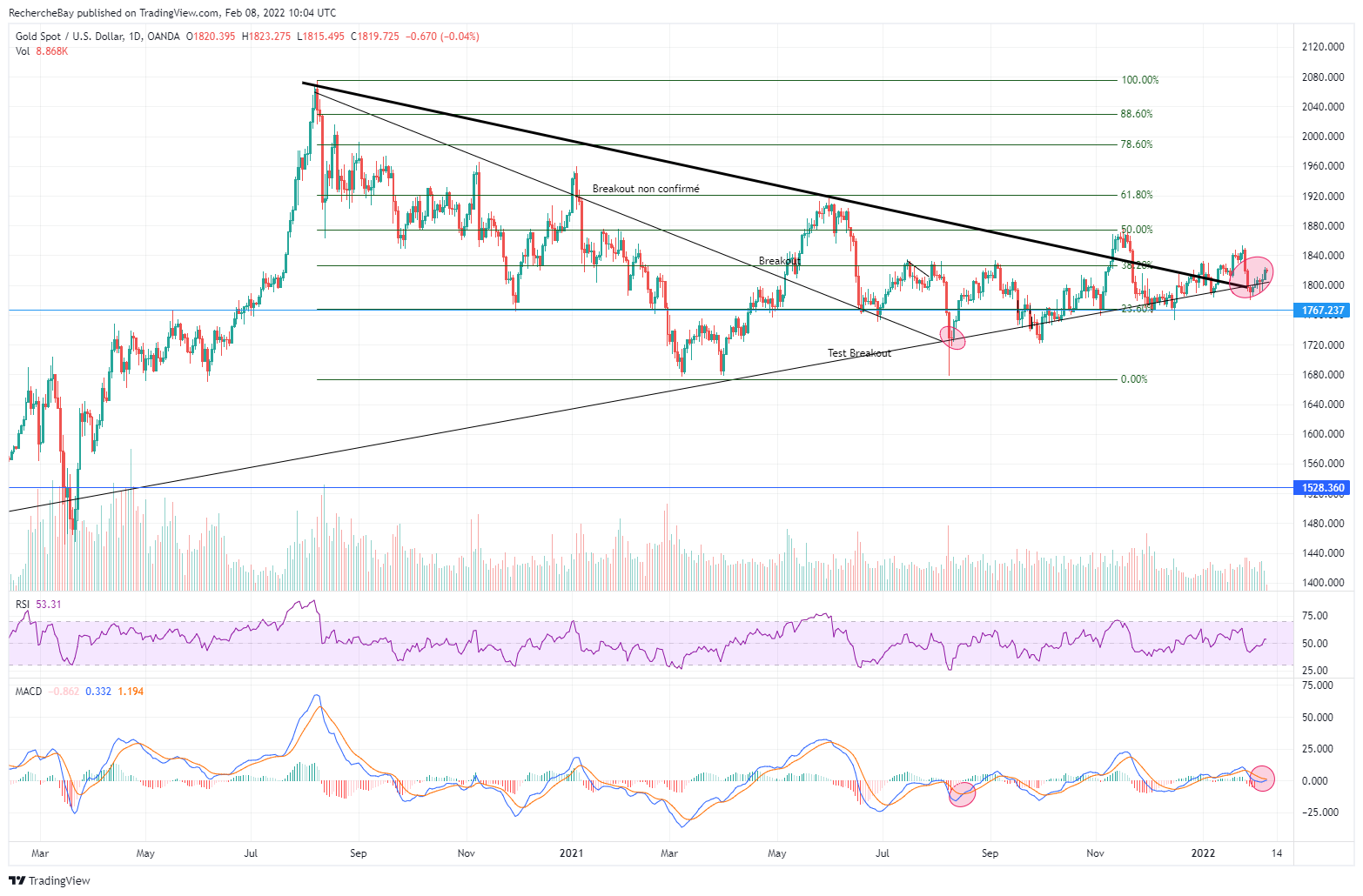 So what is holding gold at such high levels?

In a Bloomberg article, Eddie Van der Walt suggests that there is "a whale" in the gold market that consistently buys below $1800. This very large buyer is probably a sovereign wealth fund, or a central bank. The journalist pays lip service to the Chinese central bank.

It is difficult today to really know what is going on behind the very opaque curtain of the futures market, and the fog persists even on the actual stocks of the different world central banks.

If you look at what the futures market publishes each week, you can still see that the amount of stocks available for delivery has been falling sharply since the summer of 2020.

The amount of silver in the COMEX 'registered' category is at its lowest since April 2020. Gold quantities in the same category are at their lowest since October 2020.

At the same time, precious metals ETFs continue to collect at a steady pace in the early part of the year (right now SLV is officially adding an average of 70 tons of silver metal per day to its vaults).

What if gold and silver are experiencing what all commodities are currently experiencing, namely the beginning of a shortage?

Jeff Curie, a commodities analyst at Goldman Sachs, says in a recent interview with Bloomberg that he has never seen such a shortage situation in a sector he has followed for more than 25 years: “This is a molecule crisis. We’re out of everything, I don’t care if it’s oil, gas, coal, copper, aluminum, you name it we’re out of it.”

Every week there is a new record high for the price, or a record low for the stocks of a commodity.

This week, it is coffee that is making the headlines in the commodities news: world stocks are at their lowest in twenty-one years... 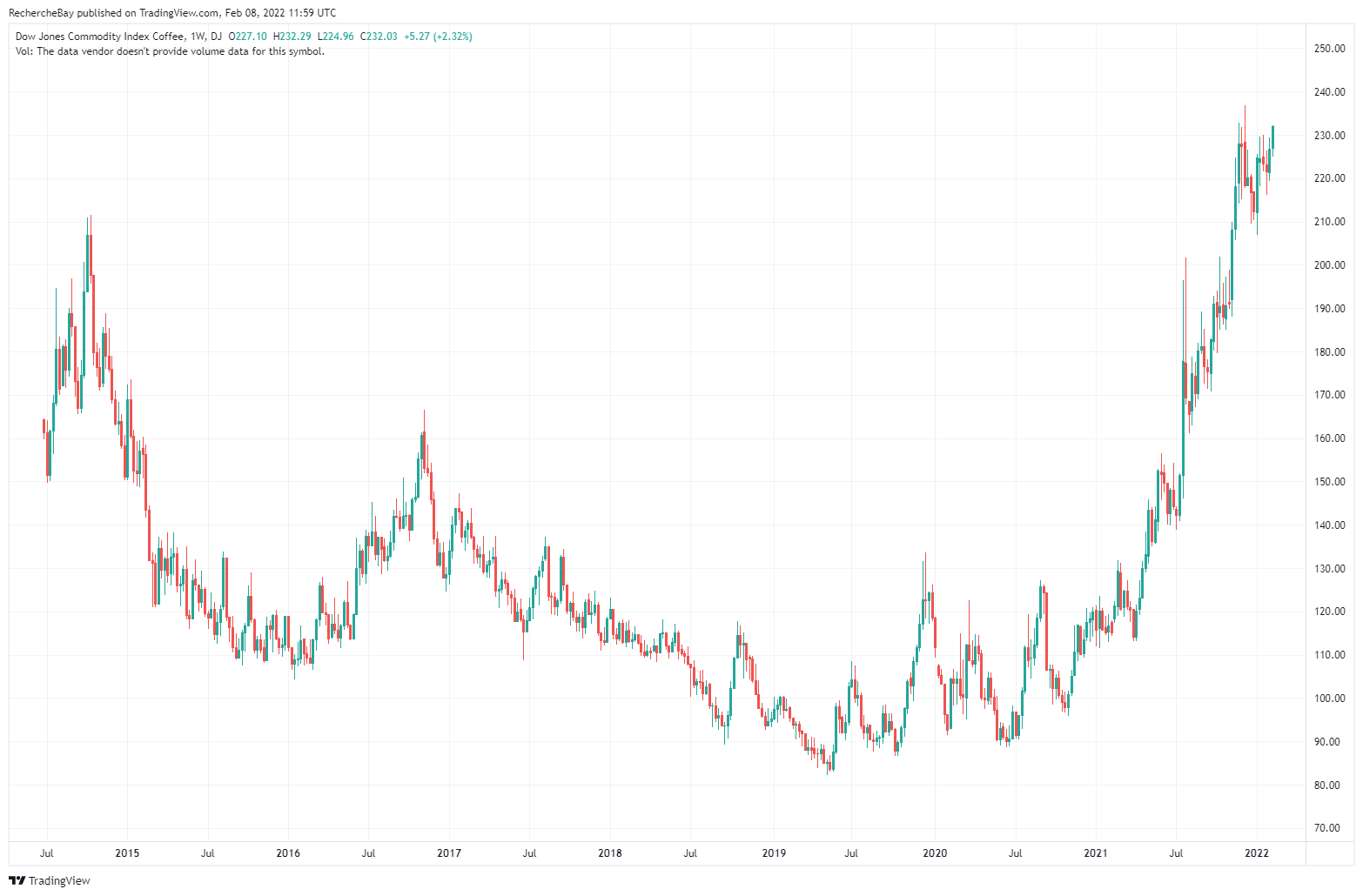 Deflationists and Keynesians base their predictions of falling inflation on demand forecasts, without paying attention to the structure of supply, which is the main factor that sustains inflation.

This focus on the demand factor alone gives commodity investors such a bearish view of the next twelve months.

The sector is literally out of business. 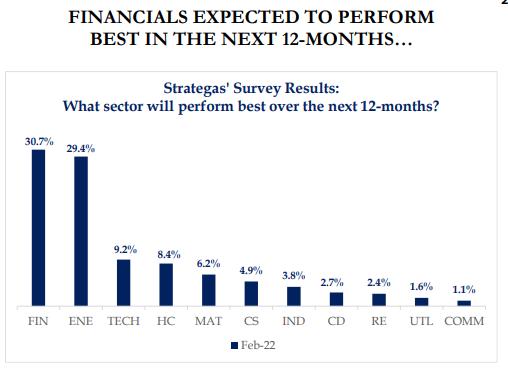 In this context, it is normal that inflation expectations are revised downwards. By focusing on demand, one can only be bearish on commodity prices...

In this bearish climate for commodities, European figures continue to surprise observers, despite the economic slowdown already observed in Germany. The acceleration is reaching record levels since the beginning of the euro: 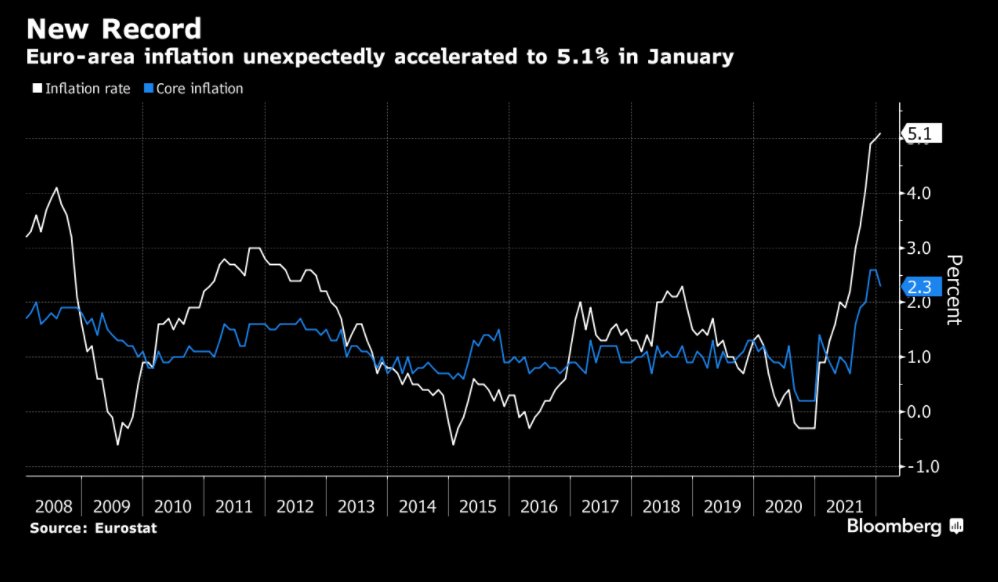 We could very well have a drop in demand with supply still low and prices still high.

What if this is just the beginning of the commodity bull run?

Let's look at the SPGSCI/DOW chart that measures the change in commodities relative to the rest of the market: 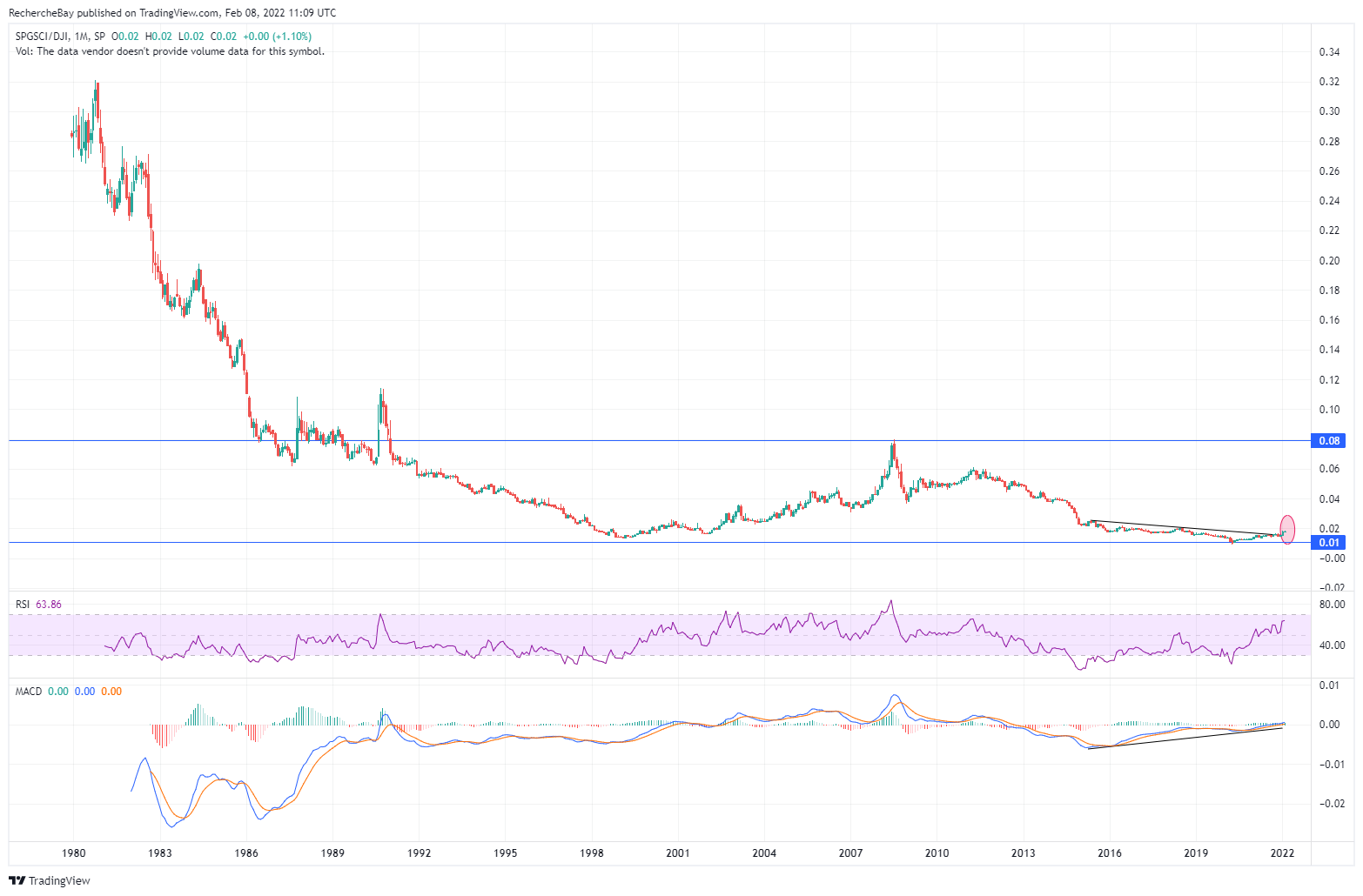 The bull market cycle has barely begun... and most investors remain bearish!

Even with a falling demand, as we have seen, the rise in commodity prices, which stems from currency depreciation (a monetary phenomenon) and a shrinking supply, is not about to stop.

This is the nightmare of stagflation mentioned in these articles several months ago.

The fall in demand could even be accelerated by this persistent inflation.

The corporate bond market is already starting to feel the slowdown due to the withdrawal of the Fed's support measures. The market is in the process of repricing the risk of bad corporate bonds, in an environment that is nevertheless much more liquid than in the spring of 2020. The HYG index, which measures these high-yield corporate bonds, has accelerated its decline in recent days even as rates have risen, signaling a very clear repricing of risk. Without support from central banks and with rates rising, some of the market's listed securities are likely to accentuate their correction. 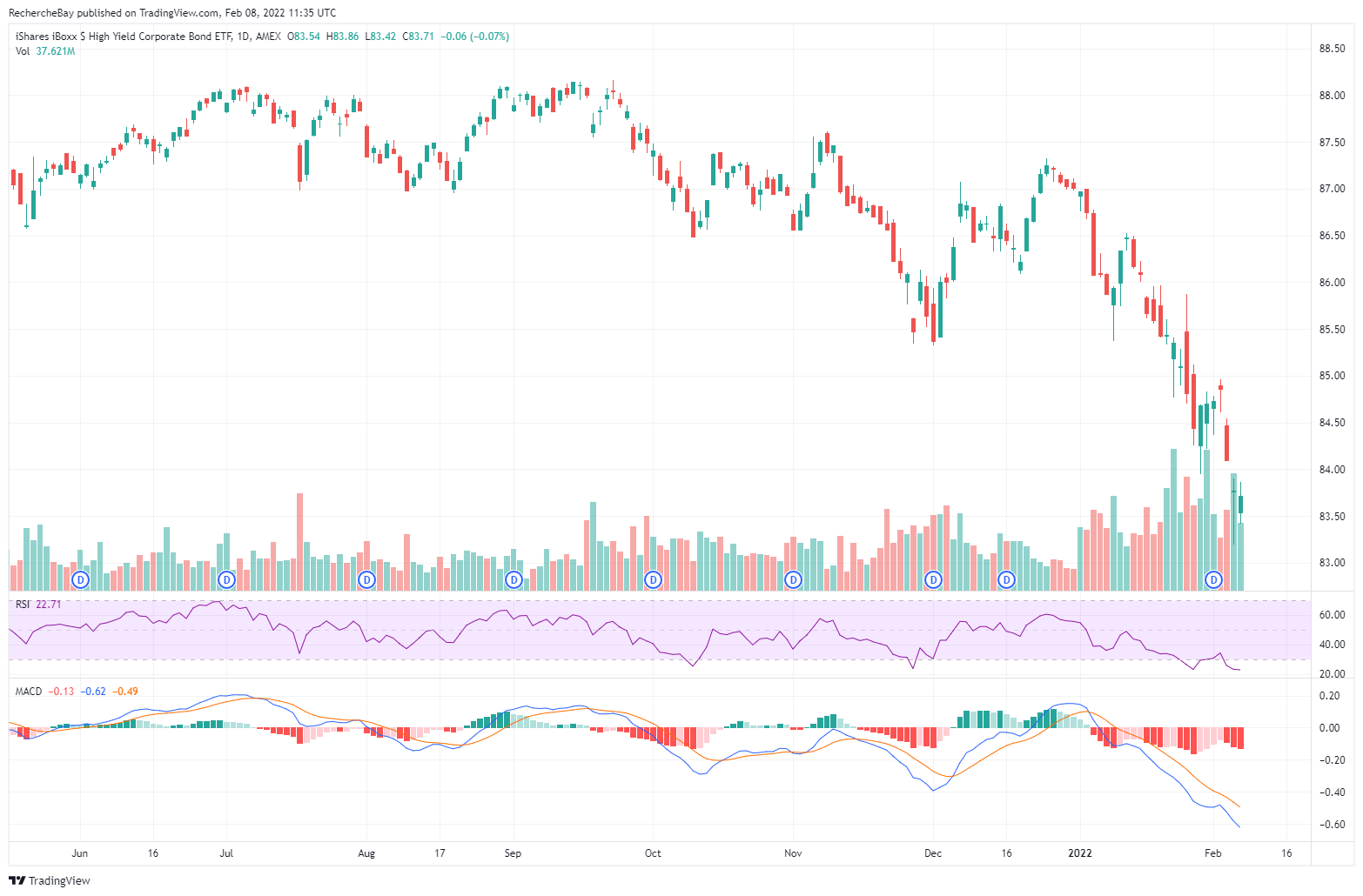 Meanwhile, gold is still holding above $1800, as we are now five weeks away from the much anticipated first Fed rate hike.

If we look back to 2016, gold's last low coincided with the first rate hike.

If we look at the fixed yield market, investors are now expecting a rapid rise in rates (up to seven consecutive hikes) in a relatively short period of time to give themselves the opportunity to ease the pressure on rates again as early as... 2024!

We would therefore be in a much faster dynamic than in 2016, with uncontrollable inflation and a corporate credit market already in free fall: a configuration that increases the risks of a major monetary policy error.

At such a level, it is perhaps this risk that gold is highlighting.