The price of gold rose above $1900 at the start of the week and has since stabilized around this level. It is the first time this important threshold has been reached since last January.

In terms of the monthly charts, gold is in a confirmed breakout of its consolidation “flag” which will have lasted 9 months: 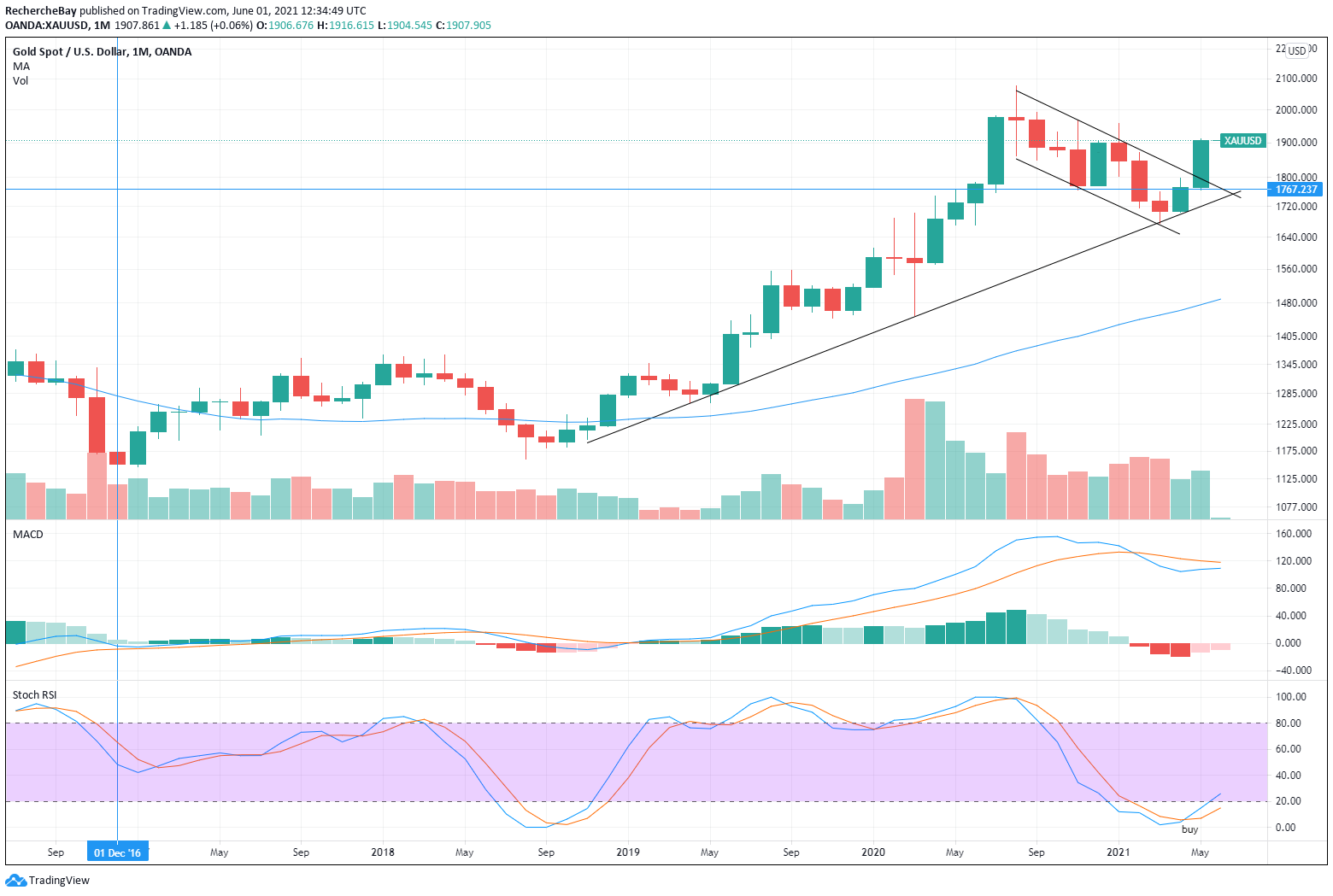 Gold has erased its losses from 2021 in just two months.

This week, Reuters informs us that the monetary funds attracted almost $2.6 billion to investment products associated with gold in barely 7 days; a record since April 2020. This amount, though, is still no more than a weak commitment when compared with the classic monetary investments of $70 billion for the same week. The “cash” reflex is still greatly in excess of the “gold” reflex, in a context whereby the markets appear to be sketching out a “top”.

While the funds are advancing skittishly on gold, the central banks, it seems, have accelerated their purchases.

Bloomberg reports that the gold stored at the Bank of England has been sold with abnormally high premiums lately, implying that the central banks have gone back to buying gold in recent months, in an intensive way. The same press agency also reports that the BIS (Bank of International Settlements) purchased over 450 tons of gold (1 million ounces), probably on behalf of one or more central banks. News like this is always very difficult to confirm because these movements occur without a great deal of publicity. If Bloomberg’s reports are true, it is big news for precious metals enthusiasts. In fact, it may even be the biggest news in this market in 2021! This acceleration of the central banks’ purchasing movement is the sign of a likely return of gold to the big monetary reform that the central banks will have to implement, in order to restore confidence in the system after this overdose of unpayable debts which has lasted years.

The other buyer who has been very active in this market since the start of the year is China. Its imports of gold from Hong Kong increased by +219% in April compared with the previous month. As a reminder, China was a net exporter of gold in April 2020 to Hong Kong...

This accumulation from central banks coincides with a very significant change on the inflation front.

The “PCE core” prices index, which is closely monitored on the other side of the Atlantic, rose by +3.1% in April as against the expected rise of 2.9%. That is the biggest annual increase since 1992: 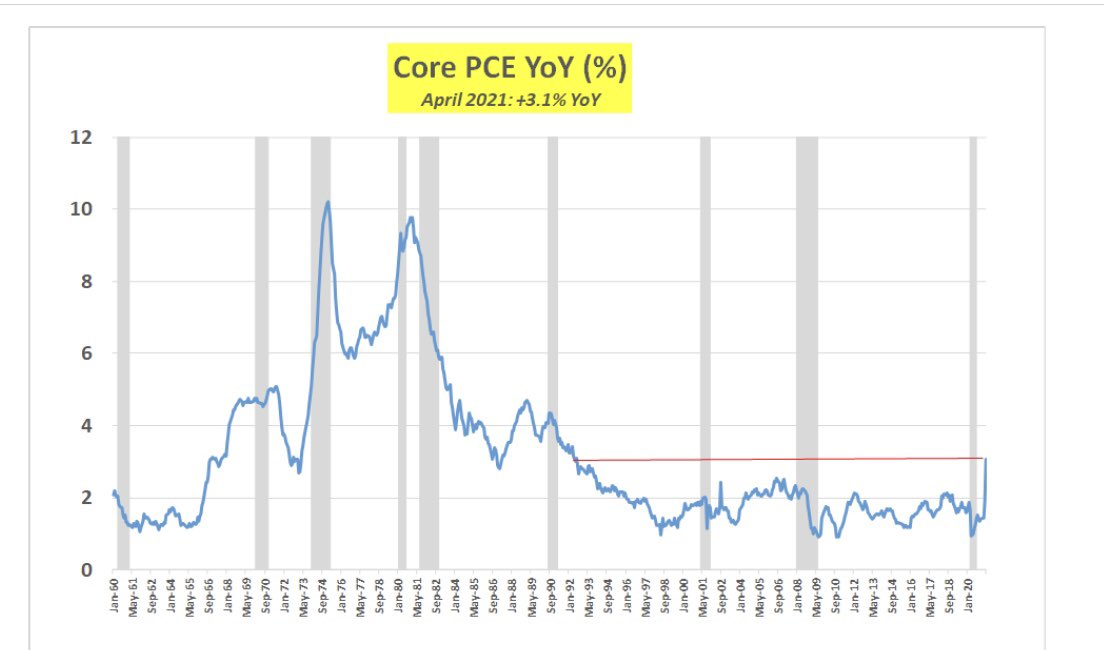 Even more significant, though, is the fact that despite a price rise like that, revenues nevertheless fell by -13% in April (-$3 210 billion), even as consumption increased by +0.5% to +$80 billion in the same month.

The Consumer Price Index, one of the elements most closely monitored by the Fed as a measure of inflation, has been rising spectacularly in recent weeks. 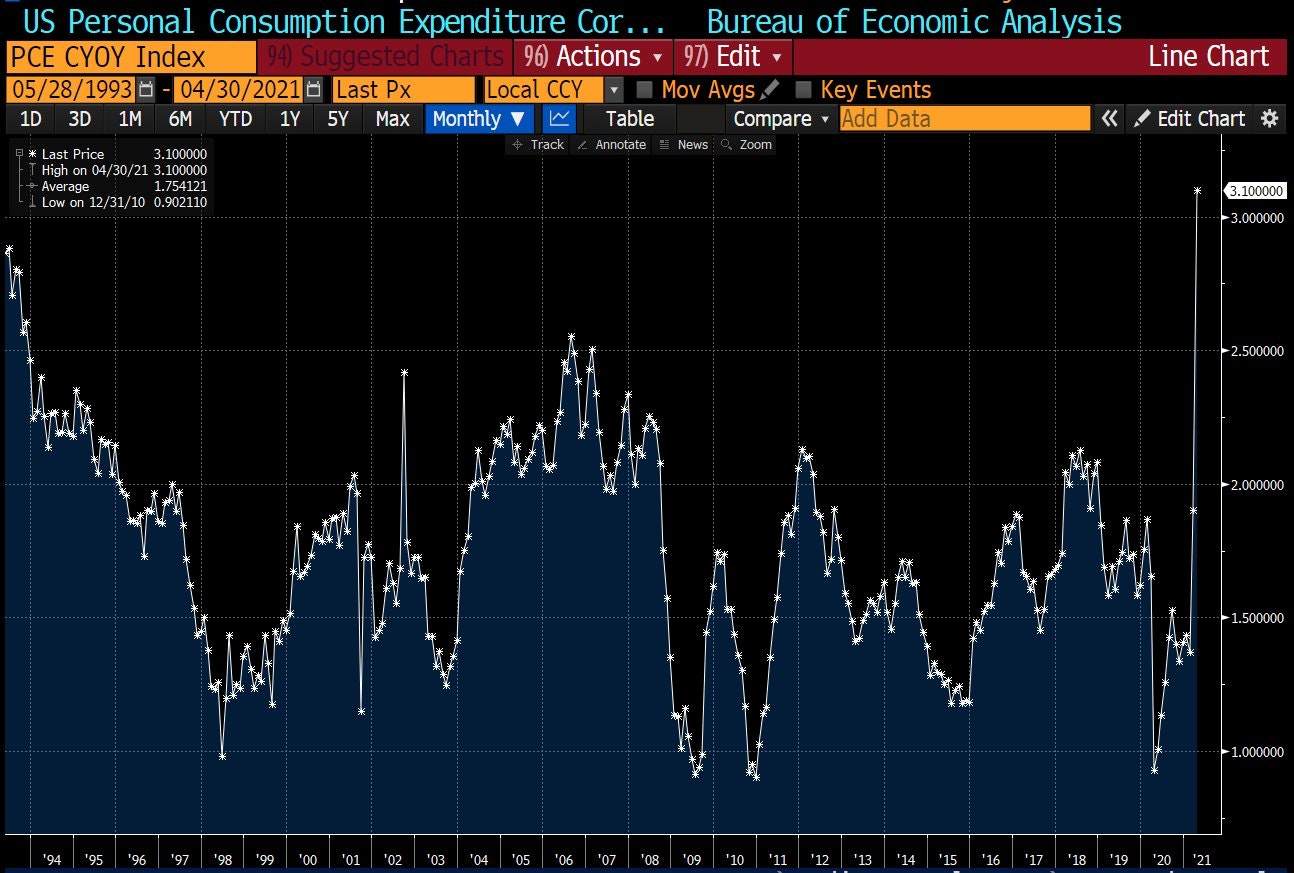 In 2020, U.S. stocks collapsed as the country went into a steep recession. This year, U.S. stocks are collapsing in a completely different context, linked to high consumption.

In other words, by contrast with the most recent deflationary crises in which the stocks collapsed because demand was also falling and the companies were cutting their orders in anticipation of lackluster demand, this time, companies are seeing the same stocks collapse because the demand is too sustained. The rise in prices is not allowing these companies to guarantee sufficient margins, and they are being forced to operate using lean manufacturing, not because the stock is expensive, but because inflation is bringing about a risk on the margins: 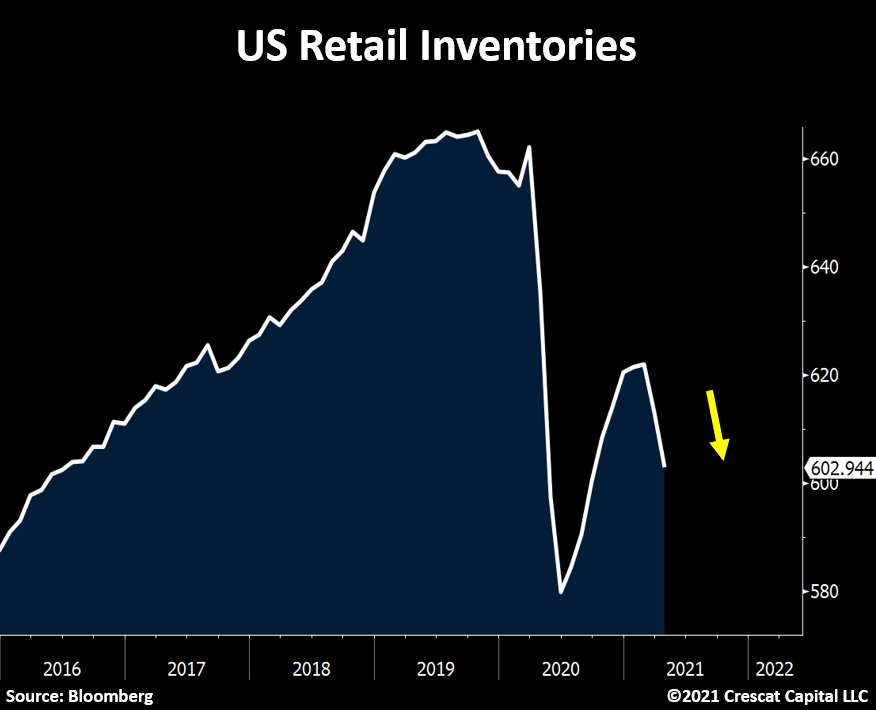 Consequently, this new backdrop is leading to an acceleration in the velocity of money, the final sign of the major resurgence of inflation in the United States.

The Fed keeps reiterating, as we have been written about for several weeks, that this inflation is transitory. With its gaze locked on indicators that are, ultimately, not yet alarming, the Fed is attempting to reassure the markets. The Bloomberg Commodity Index, for instance, though rising sharply, is at the same level as in 2017: 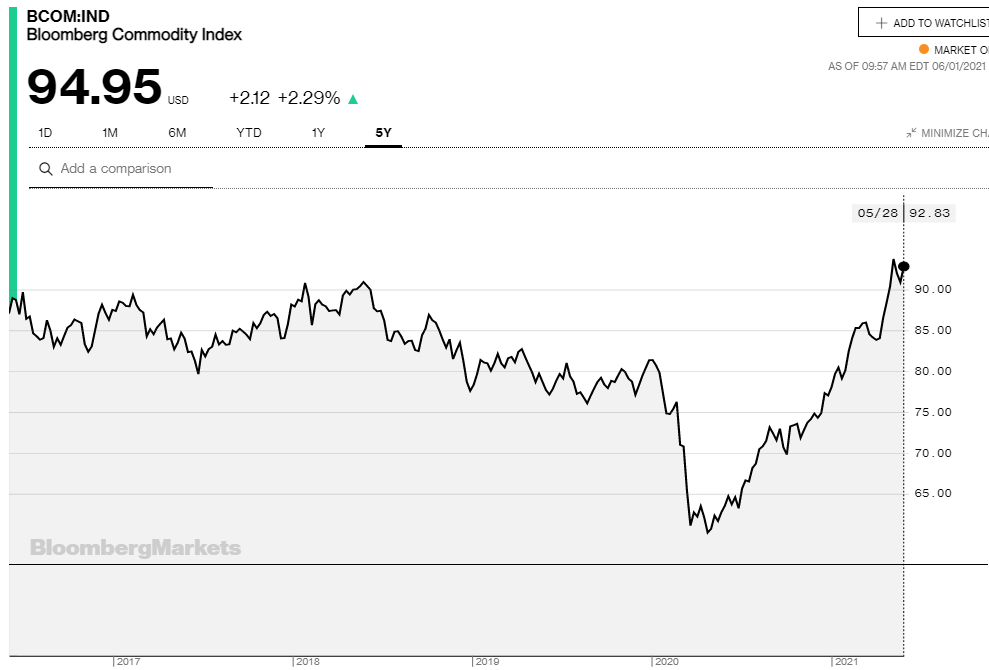 While the Fed tries to provide reassurance about the transient impact of the rise in prices, the Biden administration is launching a vast stimulus plan for federal spending, by proposing an expenditure budget of more than $6 trillion, a sum that constitutes record spending for the U.S. since the Second World War.

This plan is accompanied by a desire to restructure the supply chain on U.S. soil, so as to be less dependent, in an industrial regard, on China.

There is a contradiction, however, between the stance adopted by the Fed and that of the U.S. government. One cannot have transitory inflation with such a budget, and with such a desire to repatriate the production chain. Globalization has kept inflation in check, and the idea that stepping back from it is not an inflationary act is inconsistent.

Claiming that you want to combat inflation with a political will like this, as commendable as it may be, is a difficult political balancing act, and one that is akin to a straight-up lie...

Especially when we can start to measure inflation on our dinner tables every day.

Here is a picture that went viral this week on social media, and that measures the crazy rise in the price of a typical American breakfast in barely a year: 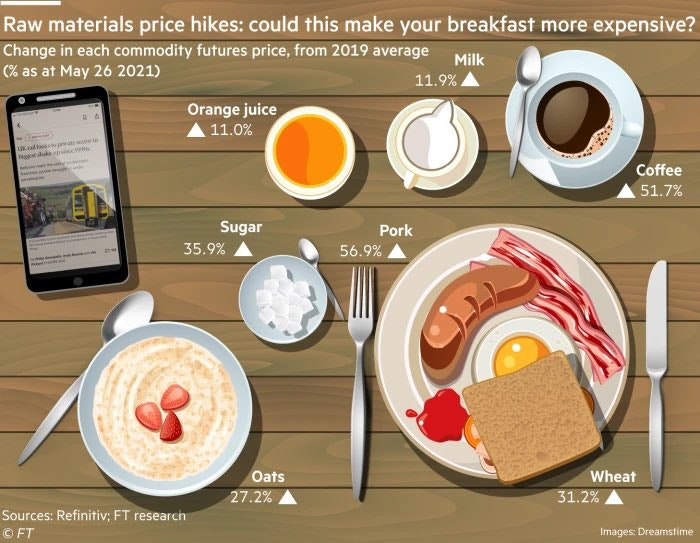 This increase in the price of food is even more tangible in developing countries.

A hike in the prices of foodstuffs like this has, in the past, had disastrous geopolitical consequences. 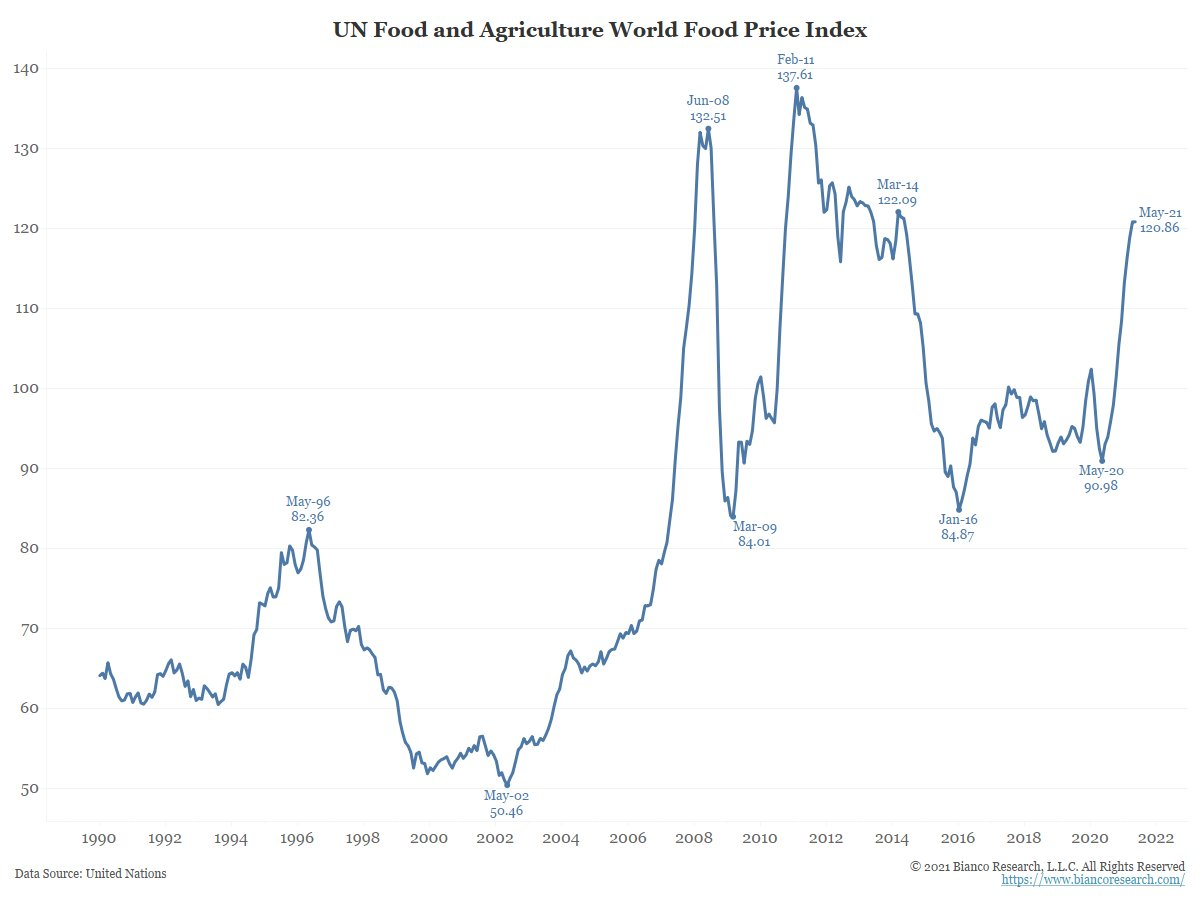 The latest peak in this price index corresponds to the start of the Arab Spring, which led to the war in Syria two years later. What followed was a migration crisis without precedent in the region. This crisis, in turn, fueled populist movements in Europe (Brexit) and the United States (Trump).

Hunger provokes riots by virtue of the unequal access to basic resources to which it gives rise. The sense of inequality then leads to violence, which, in turn, leads to poverty. The Biden government thinks it can contain the consequences of this inflation through aggressive support for the poorest sections of the population (to avoid a situation whereby Chicago is the new Baghdad and Baltimore is the new Kabul!). This may, doubtless, work in the United States, but it is by no means a given that such a program of effective support can be implemented on a global level, in the regions most sensitive to this rise in food prices.

Meanwhile, in Europe, we are still a long way from restoring the economy to its former state after a sanitary crisis whose end finally seems to be in sight.

On the economic front, the differences between Europe and America are still striking.

Air traffic, for instance, has returned to its pre-crisis levels in the United States, whereas that is far from being the case in Europe.

The Fed can at least take pride in seeing the results of its quantitative easing. The ECB, for its part, is continuing to pump money into the void; its balance sheet is increasing with each passing week, but the impact on the real economy isn’t as apparent as it is on the other side of the Atlantic.

The deficits of the countries in the Euro zone are exploding, though this has not really had any consequences on the recovery. The main thing, though, has been preserved, and that is that the cost of the debt remains very low. All this because the ECB is monetizing virtually all the debts of the Member States. We have entered an era of complete nationalization, by the ECB, of the debt issued by the ‘sovereign’ countries.

Do you remember the Greek crisis? That was ancient history. Or antiquity, rather!

Today, Greece is continuing to accelerate its spending at the same pace that took the country to the edge of the abyss in 2011. This time, though, the ECB is buying up all this debt, and this is lowering the rate differential between the Greek 10-year yield and the German 10-year yield to an historic low, whereas, during that famous crisis in 2011, this differential had risen to +35%. 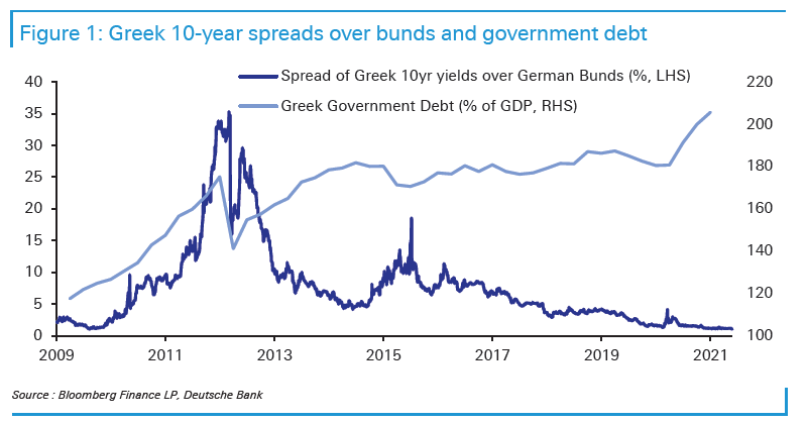 One might well wonder why so much energy was expended on this Greek tragedy, when all it would have taken back then was for the ECB to have proceeded to the checkout...

That was a different time, though.

What has changed is the feeling that spending all that money borrowed from the ECB isn’t really having any consequences, and that the deficits, ultimately, are no longer a problem. It is a feeling shared by Europe’s entire political class, without exception.

People are wondering what the point of levying tax is, in such an environment. It’s a fair point...if money is so easy to come by, for a state, why does it continue to levy tax? One might well wonder...

Let’s end this article in the customary way, with the latest news from the gold and silver markets.

This week, the U.S. Mint officially acknowledged that there is a shortage of precious metal coins it has been releasing in dribs and drabs, and the institution is announcing restrictive measures for individual buyers: 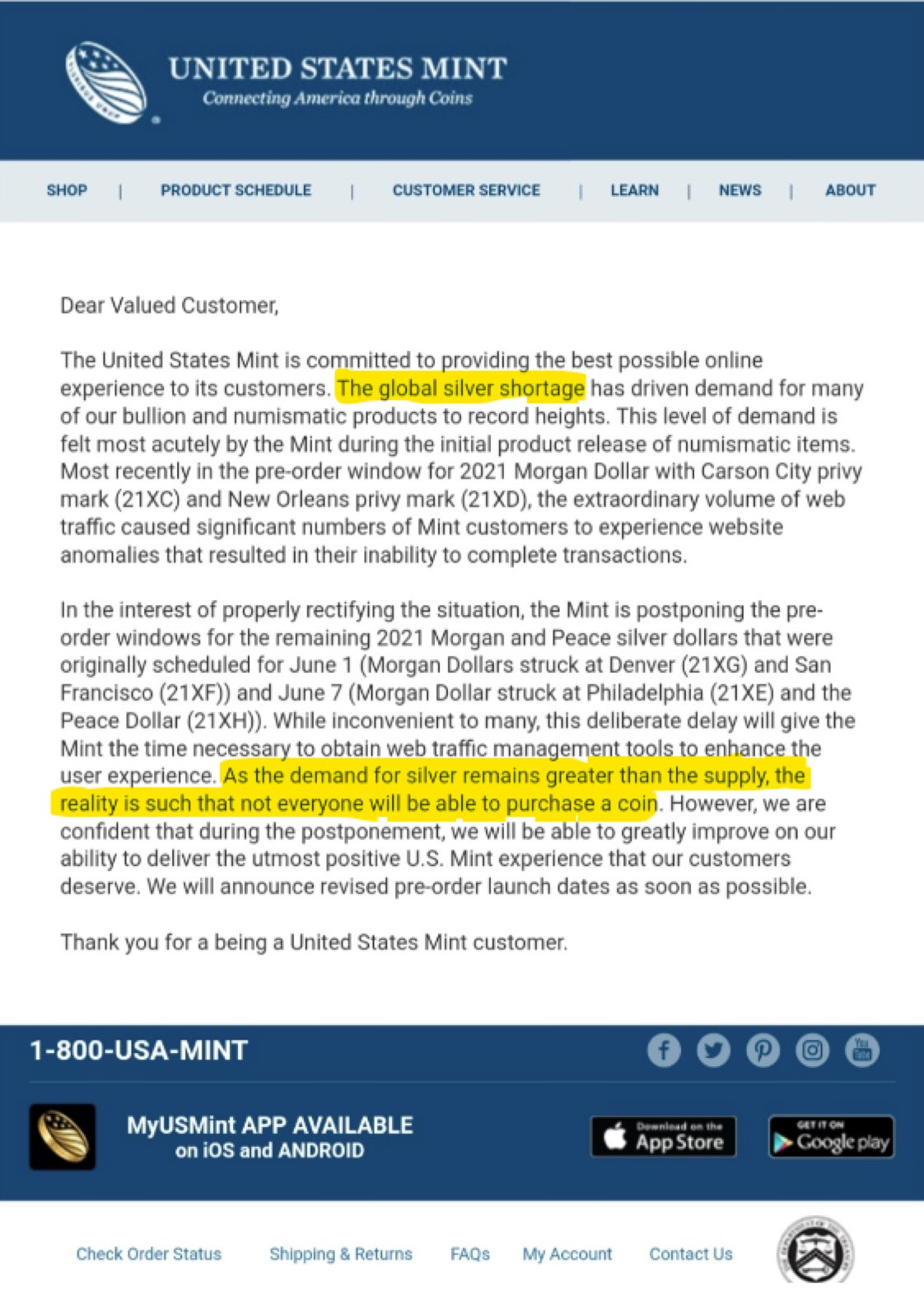 Among said individual buyers, a large portion are now concentrating, as we have seen, on silver. These investors are continuing to buy, in large numbers, the PSLV tracker which stores its ounces of silver in Canada, whereas the stocks on the Comex that use the London scene are continuing to disappear before our very eyes:

The mining stocks are continuing on their merry way, surpassing, back in May, the other stocks on the market: 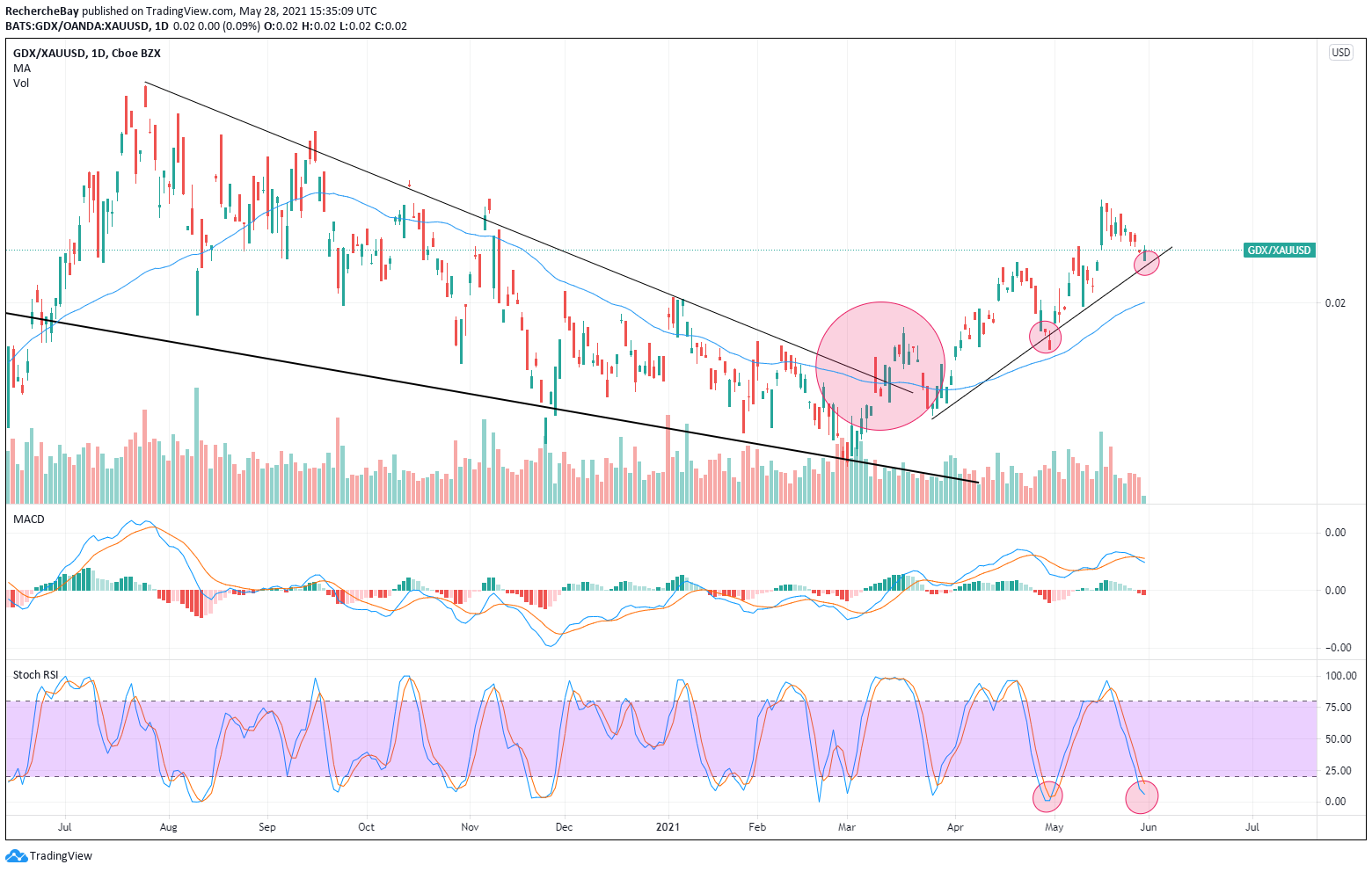 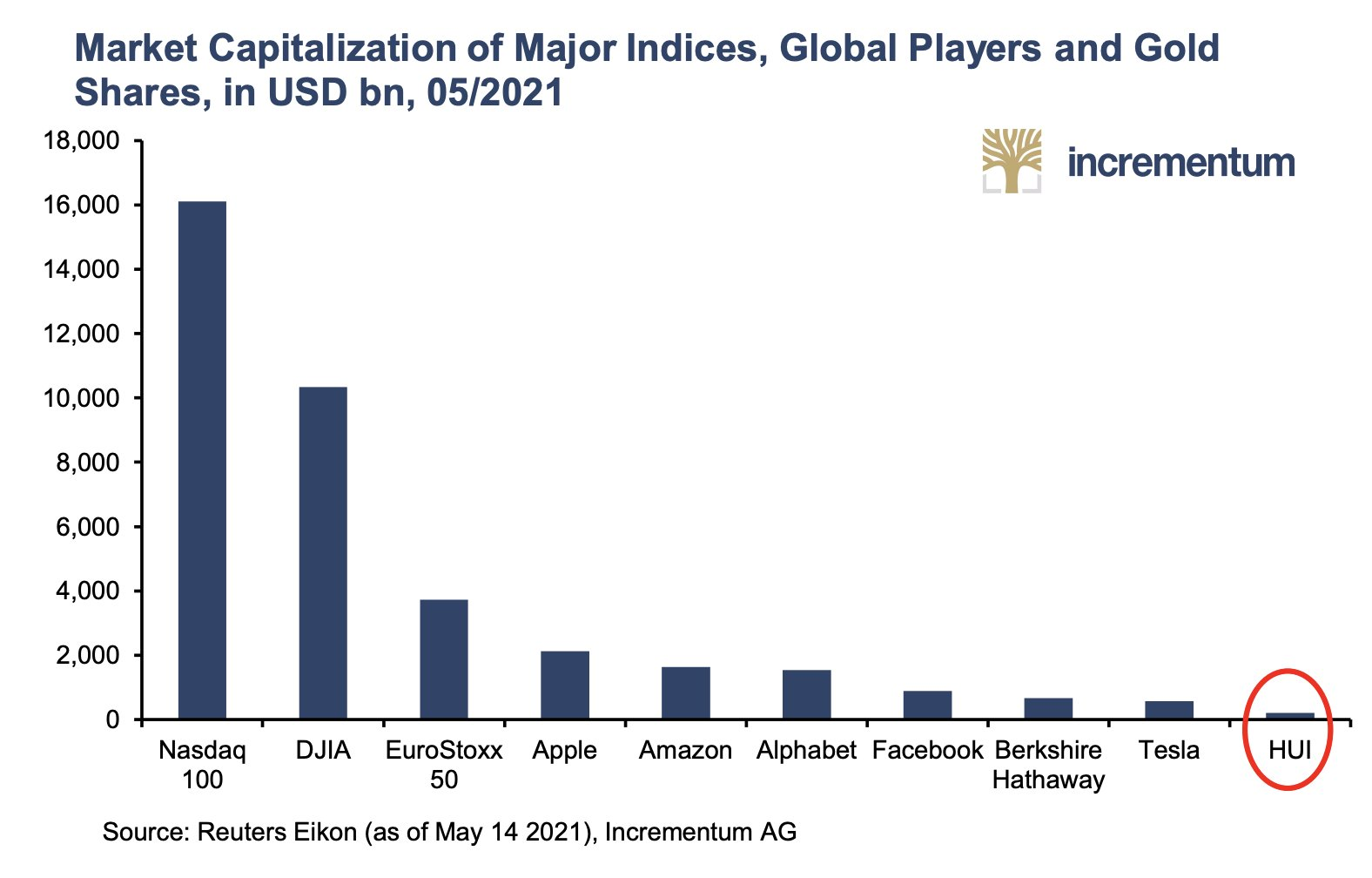 With prices as low as this, we can expect a series of mergers and acquisitions in the sector. The producers who were the first to engage with the upward movement must replenish their resources now that they are faced with the fall in production that has been announced. They have already set out to find some, and they will be able to benefit from the low valuation of small producers and exploration companies at the end of the development phase. The most active companies will be the ones that reap the biggest rewards. The first in line will get the choicest cuts!

The task at hand is to identify which ones those are...and to remunerate, as investors, those companies that have the most pertinent strategies. This is one of the reasons that explains why the value of the management is perhaps the SINGLE most important criterion for evaluating a mining company.