The catastrophic employment figures published last week raise a lot of questions about the economic recovery in the United States. The question everyone wants to know the answer to is why are so many Americans taking so long to get back into the labor market, at a time when the number of job offers is constantly rising.

This is even more true for young people; the employment rate among young graduates is still at lower levels than normal: 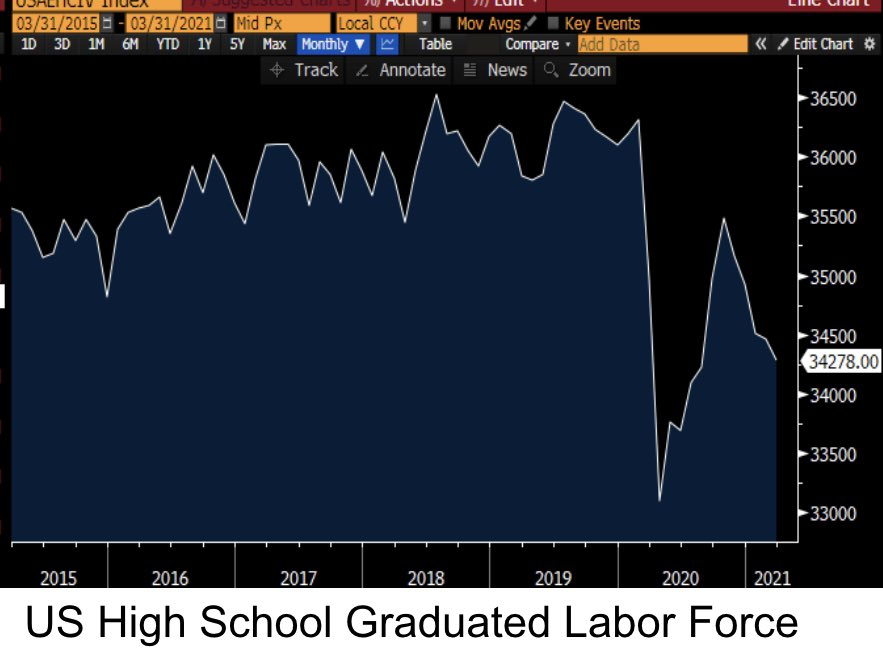 It is true that the partially tax-free unemployment measures (which represent a net revenue that is often far larger than a salary) and the checks (free money) sent to all Americans are not inciting an urgent search for employment, particularly when this often gives rise to incidental costs (travel, childcare costs, etc.). Ultimately, it would be far more costly, for some, to resume work than to carry on receiving generous government benefits: the share of income stemming directly from the government is once again revolving at around 30%, which is absolutely unheard of for the United States. 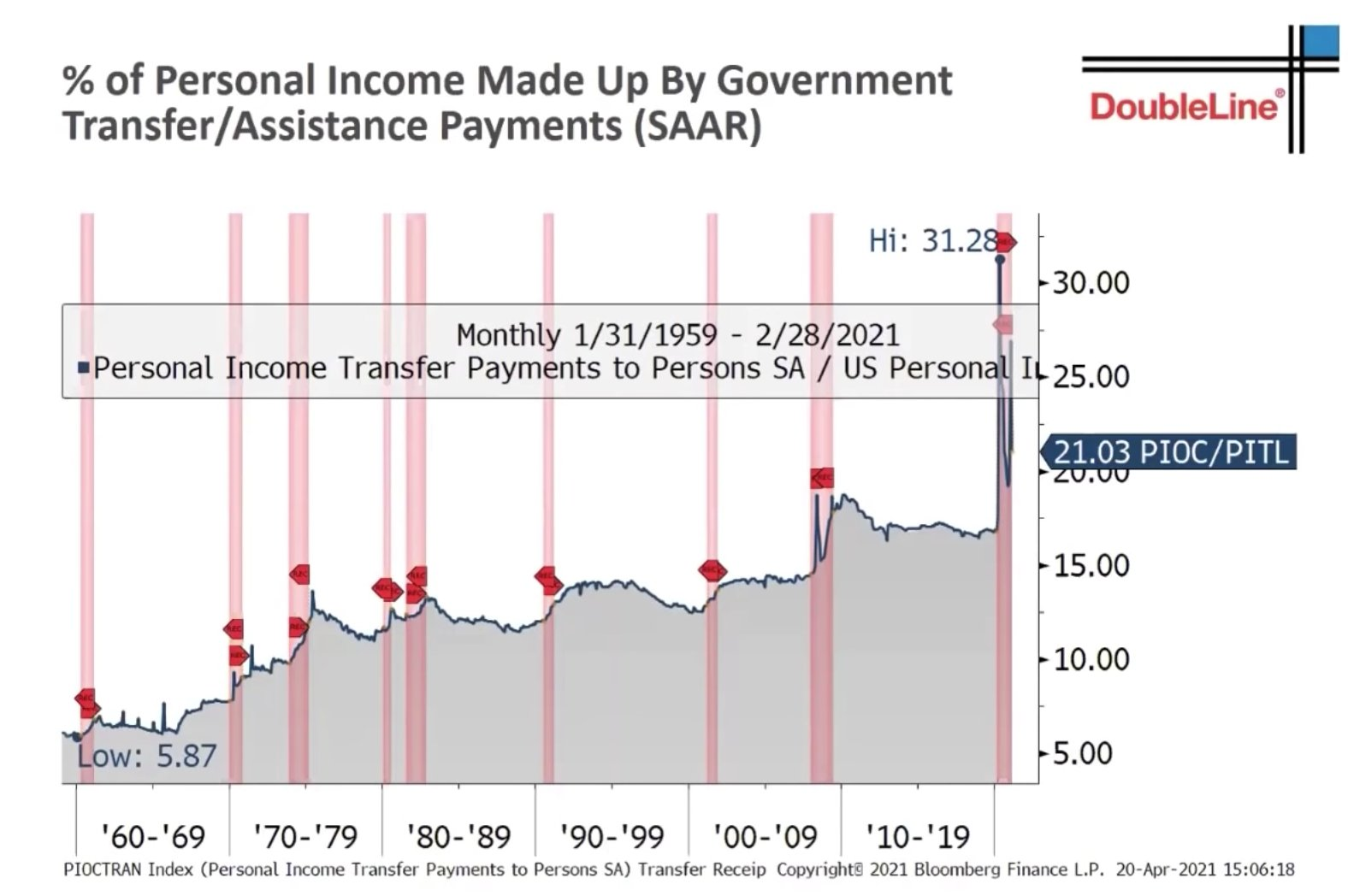 President Biden sees these bad employment figures as another reason to continue with his accommodating policy aimed at relaunching the economy: 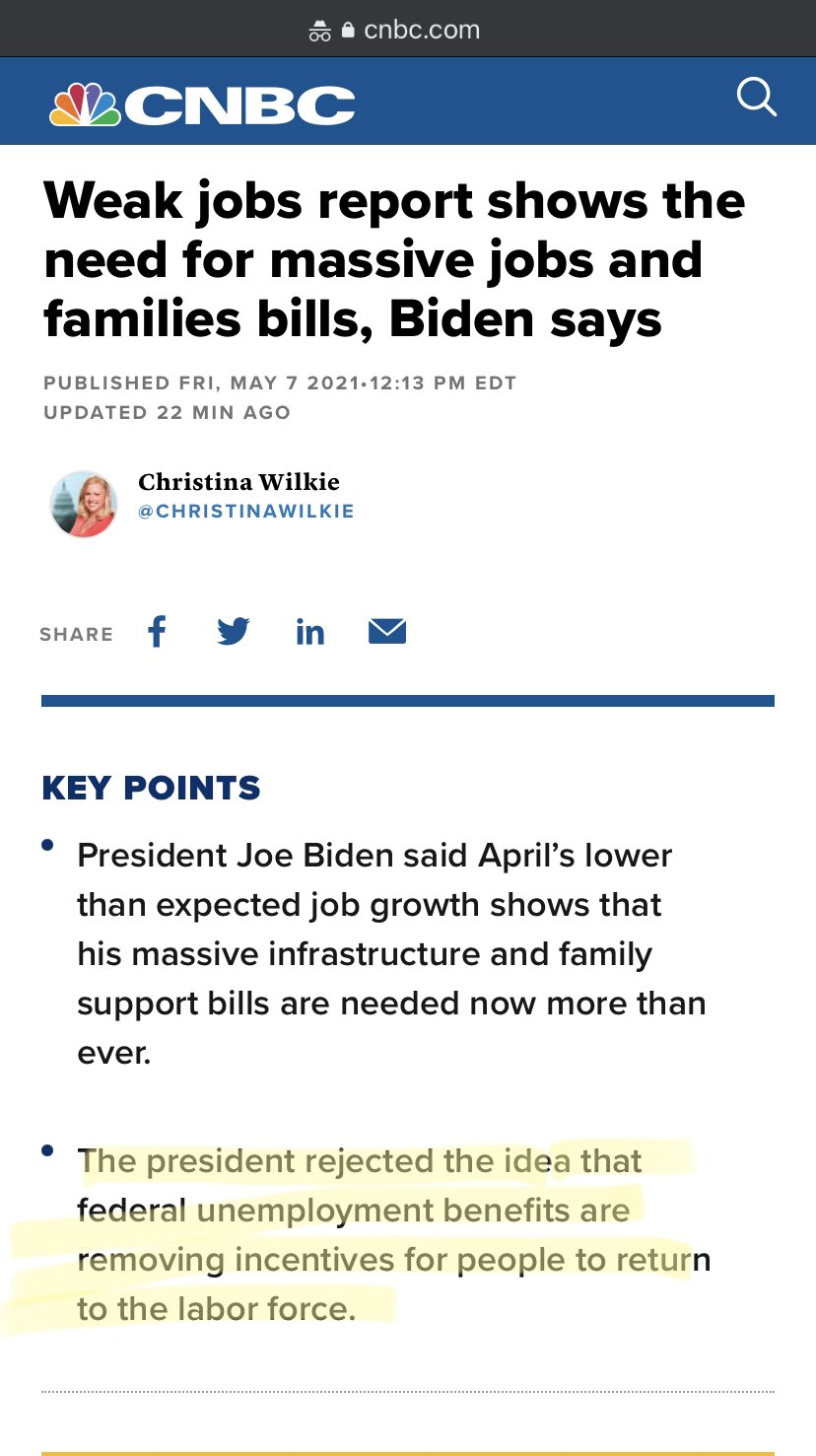 The inflationary pressure on U.S. salaries is thus only just beginning. Employers are going to have to make far more of an effort to get back into work an entire generation that is now accustomed to a certain level of revenue, either because these young people have managed to benefit from juicy revenues on the Stock Exchange or on their favorite cryptocurrencies, or because this generation Z is accustomed to receiving U.S. government subsidies. The promise of the canceling of student debt is another element that is putting the brakes on job seekers’ sense of urgency. What’s more, without this pressure of having to repay such a burden, the previous generations would have been under less pressure to find their first job too, but that’s a subject for another day...

In the last few weeks, entire sectors of the economy have seen a spectacular rise in salaries, primarily due to a lack of manpower. Companies in the catering sector, for instance, are redoubling their efforts to attract new recruits.

An illustration of this has now become famous on social media: the famous Chipotle restaurant chain has just raised its minimum wage for new recruits to $15 and is planning to implement a 3-year compensation plan at more than $100 000 per year for every employee! These figures are quite simply unbelievable when one compares them to the starting salary of an engineer in the United States, which is $65k per year (including allowances).

This brutal inflation, linked to the monetary policy of the central banks (which we’ve been dissecting here for several weeks) is now leading to such a disconnect in the prices that it is profoundly opening to question the value scale that a sound money ought to be conferring on a fair economy. It is thus more profitable to work in a restaurant than to take part in the re-industrialization of the nation, due, in particular, to the deregulation of values that these monetary policies have engendered.

It could therefore be beneficial to speculate about cryptocurrencies too, which are benefiting from a disenchantment with values labeled in dollars: in barely a few months, the cryptocurrencies have replaced all the dollars in circulation (in value). 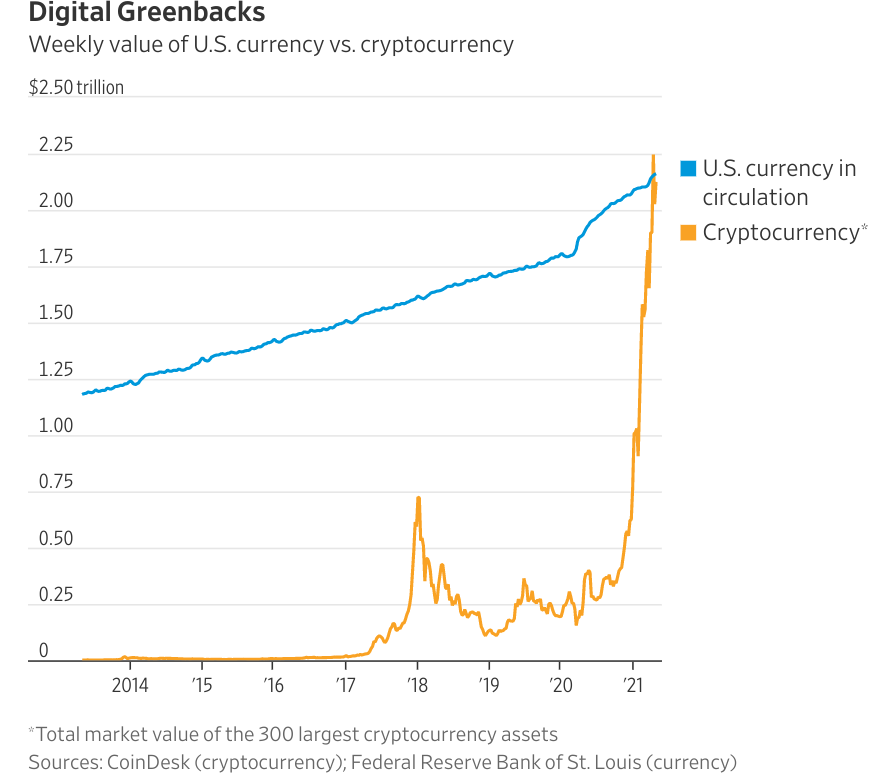 It’s almost as if what is supposed to have value (the official money) were being wiped away before the latest speculative, fashionable discovery.

This is the ‘Weimarization’ of society. The spotlights are gradually turning towards the latest ‘coup’ that’s in vogue. Yesterday it was DogeCoin, a cryptocurrency originally created as a joke, whose valuation has now reached a crazy level. Today see the launch of ShitCoin, another cryptocurrency with a promising future. It is in this type of very dangerous climate that, historically, losses of confidence in a fiduciary money have begun to be seen. Thus it is how inflation, an economic mechanism, is gradually turning into hyperinflation, a monetary mechanism.

This rush on the cryptocurrencies reflects an exponential rise in the value of the U.S. central bank’s liabilities. The red curve below represents the mathematical charting of the exponential curve closest to the variation in this liability (the black curve). 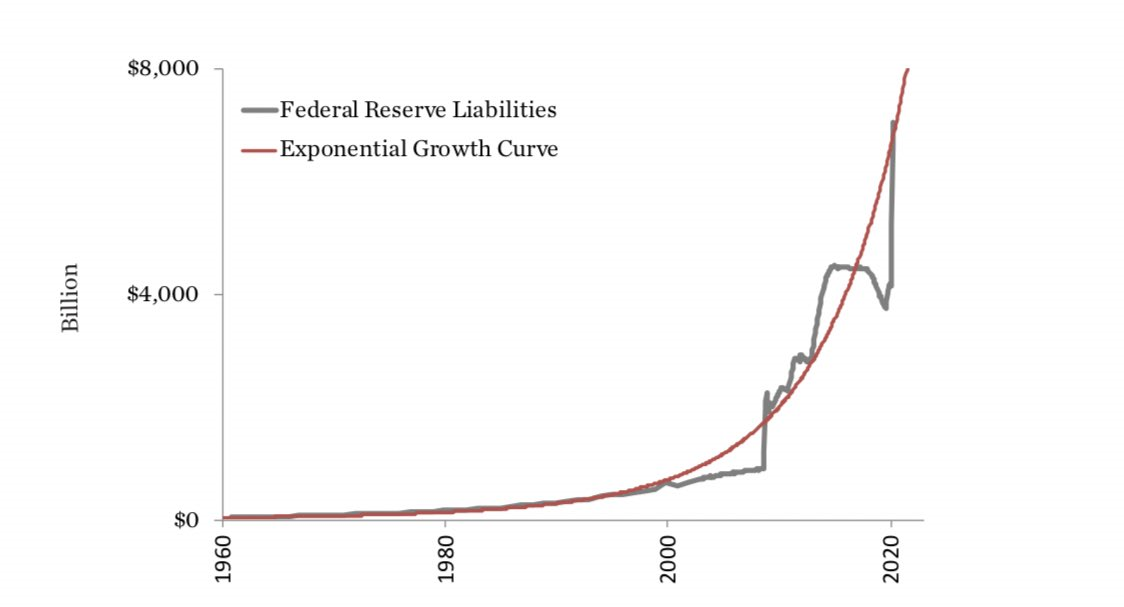 If the Fed is spending exponentially, it is quite natural that everything that is labeled in dollars would follow the same curve, because the Fed is now obliged to monetize the U.S. debt, while lowering the value of the dollar more and more. The Fed cannot reverse this monetization: the country is registering a double deficit of 25% of GDP, and, with such a burden of debt on the country, a lifting of the rates by barely two points would lead to an additional cost for the State representing 30% of said GDP!

The Fed has no choice but to allow the dollar to lose value in order to alleviate the state of the country’s finances! And this trend is happening at an ever faster tempo.

In this climate of defiance regarding the value of money, commodities are naturally continuing the ascent that began several months ago. The general CRB index has now broadly come out of its rising ‘wedge’. 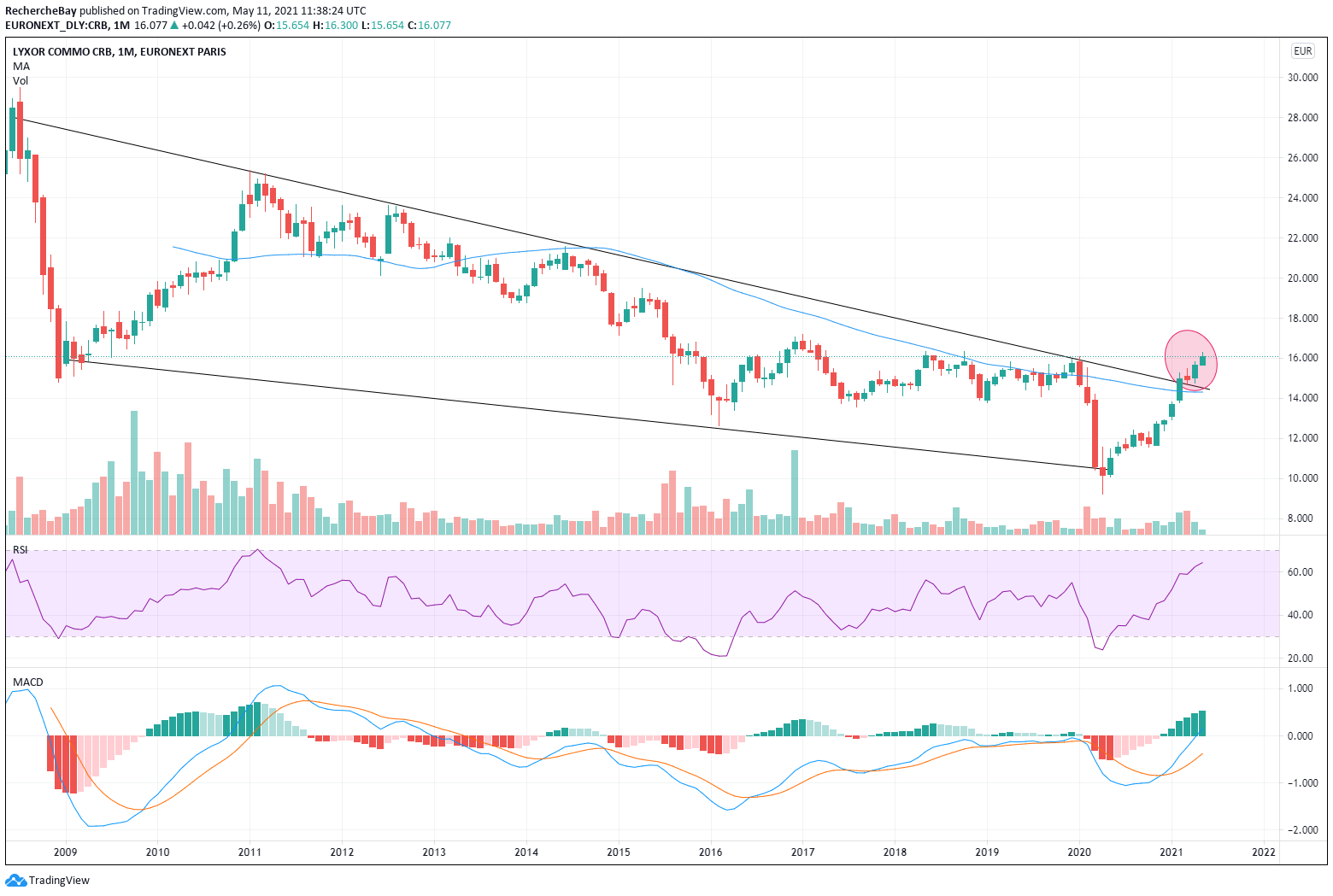 This rise appears to have finally calmed down on the commodities most affected by this uncontrolled upward movement. Lumber is taking a slight breather this week. 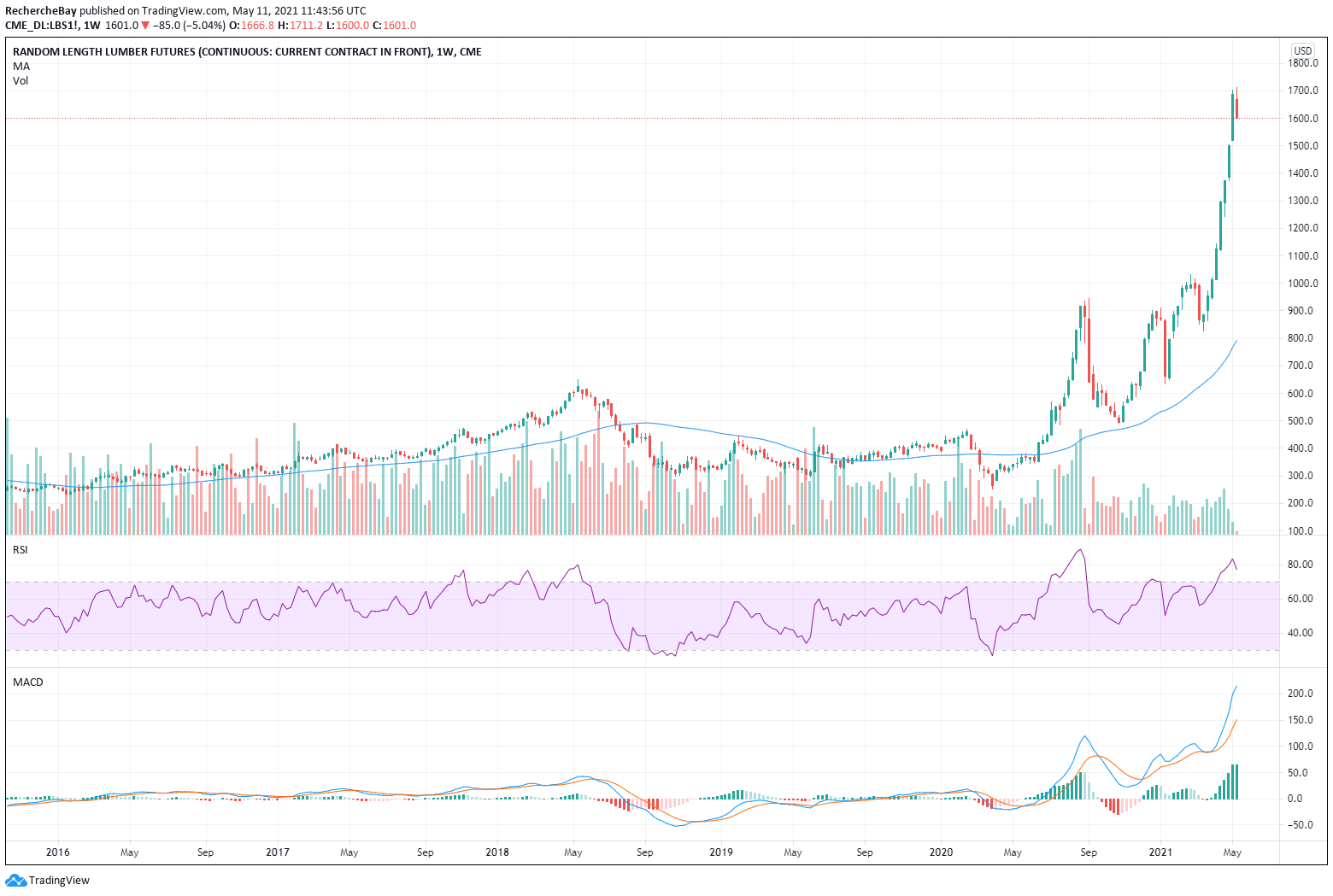 Copper is going through a spectacular rise since its breakout, and it too is now stabilizing on a support that is very long-term. 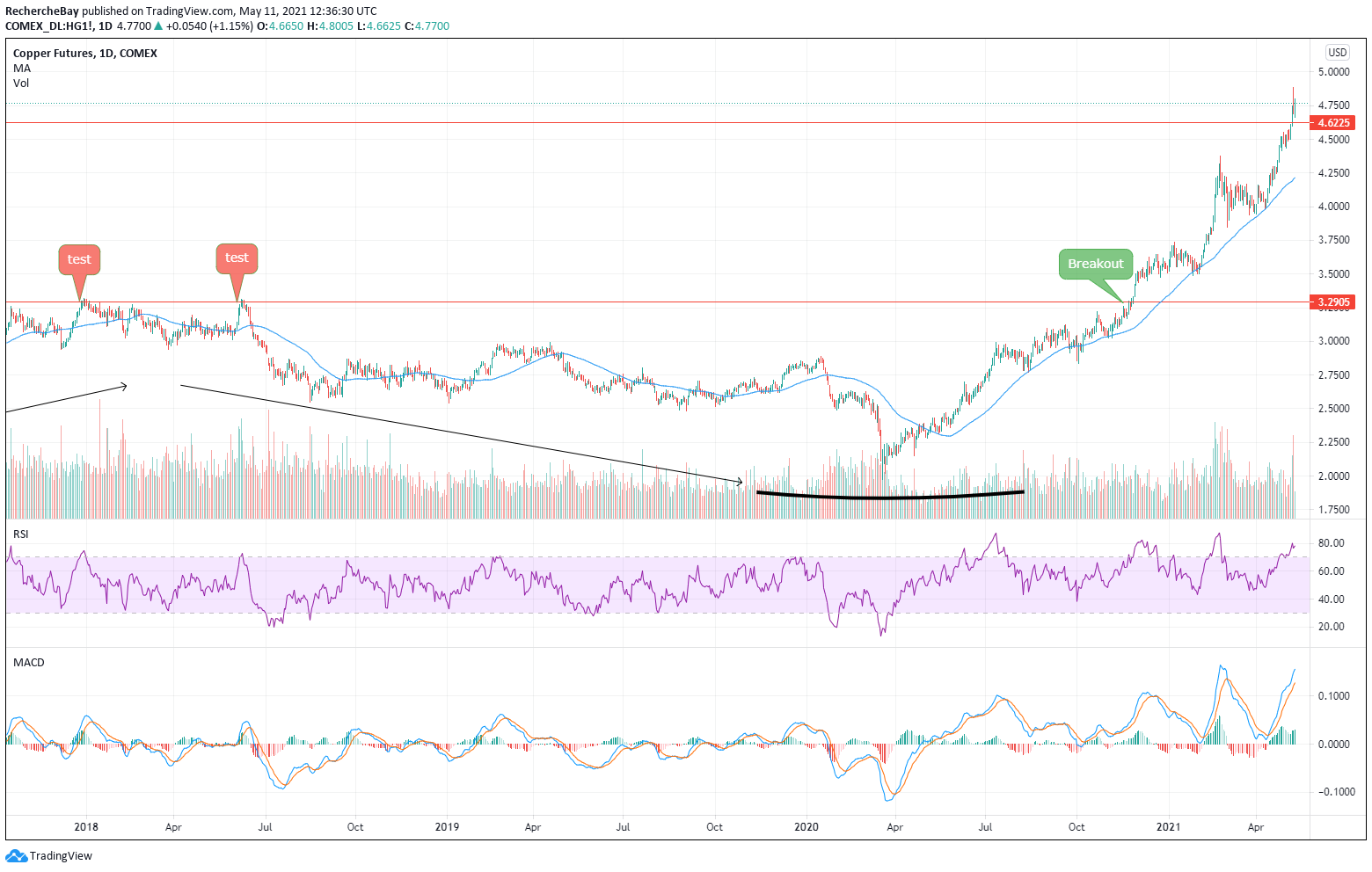 Gold, too, has found a new ceiling and new short positions have even opened up in this early part of the week. These new ‘shorts’ are hoping to redraw a second ‘false breakout’ and cancel out gold’s emergence from the consolidation channel. 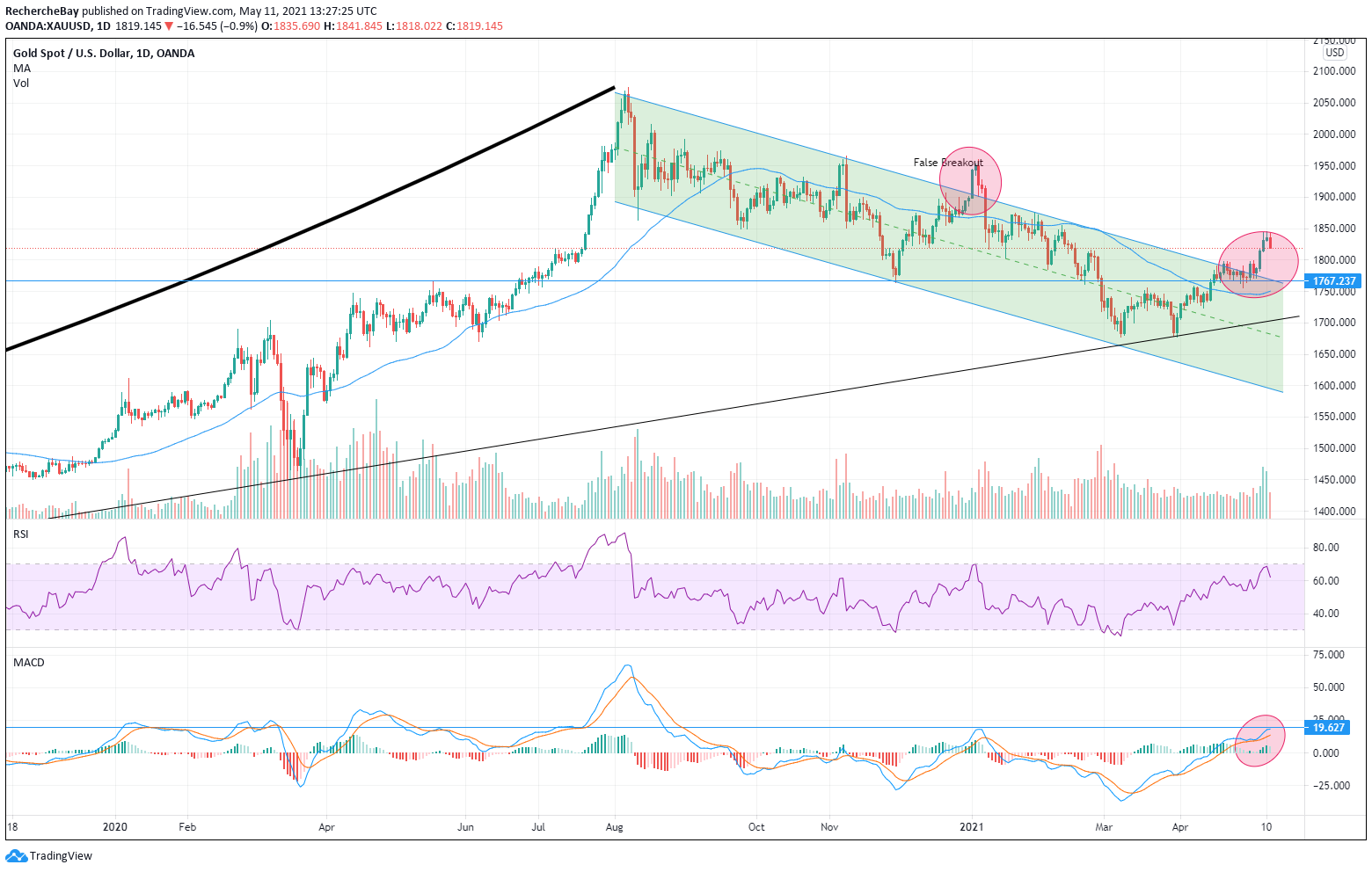 The gold market is being ‘held’ this May by derivative positions (options) that are greatly limiting the evolution of the prices between now and the end of the month.

On the physical market, far removed from the fluctuations of the paper market, the tension is even more acute on all the precious metals. The previous year had already seen the volume of deliveries on the Comex exceed the combined volume over the last five years. The rate of deliveries for 2021 is in the process of surpassing that of 2020. Today, the futures market is the preferred method of obtaining physical metal, whereas it was intended to be the basis of a financial instrument that protected producers!

On the silver market, things are even more complicated. London’s LBMA market has just reported a stock error of more than 120 million ounces, an error that was supposedly observed at some point in February. This small detail served as an early clue to the WallStreetSilver community, which remembered that back then, the Silver Short Squeeze had provoked a very sizeable spike in purchases by the SLV tracker...which, sure enough, stores its silver on the LBMA. The WallStreetSilver community asked itself questions about this stock error and links it with the latest SLV rush: did that rise in demand on the SLV tracker genuinely give rise to a physical purchase of silver? Doesn’t that famous “error” serve as acknowledgment of the fact that the SLV did NOT buy silver during the February squeeze? What does this error, now corrected, signify, at a time when the stocks on the tracker have returned to the pre-silver rush levels?

Though not presaging greater transparency in the COMEX/LBMA/SLV system, the members of the WallStreetSilver community are keeping up their pressure on the physical market. They are not waiting for any concrete auditing measure, or indeed in-depth investigation, on the part of the market authorities in relation to this new manipulation. They are simply hoping that the current rush on silver might unveil an increasing number of competitive metal exchange solutions throughout the world, something that will make it more and more complicated to control the market via short positions on the paper market.

Investors in physical metal are drying up the available stocks a little more each month. With that kind of pace being shown in the ‘run’ on physical metal, it is highly likely that a scarcity would lead to a far more precocious re-evaluation than expected of the gold price and, in particular, of the silver price.

Let us return now to the ‘paper’ market for gold and try to adopt a higher vantage point in relation to the major market trends.

Let’s look first of all at the behavior of gold in relation to copper. The Gold/Copper ratio has just completed a harmonious bullish ‘Crab’ figure with a beautiful ‘double wedge Value/RSI’ in the weekly chart. There is now a considerable chance that gold will outperform the commodities department. 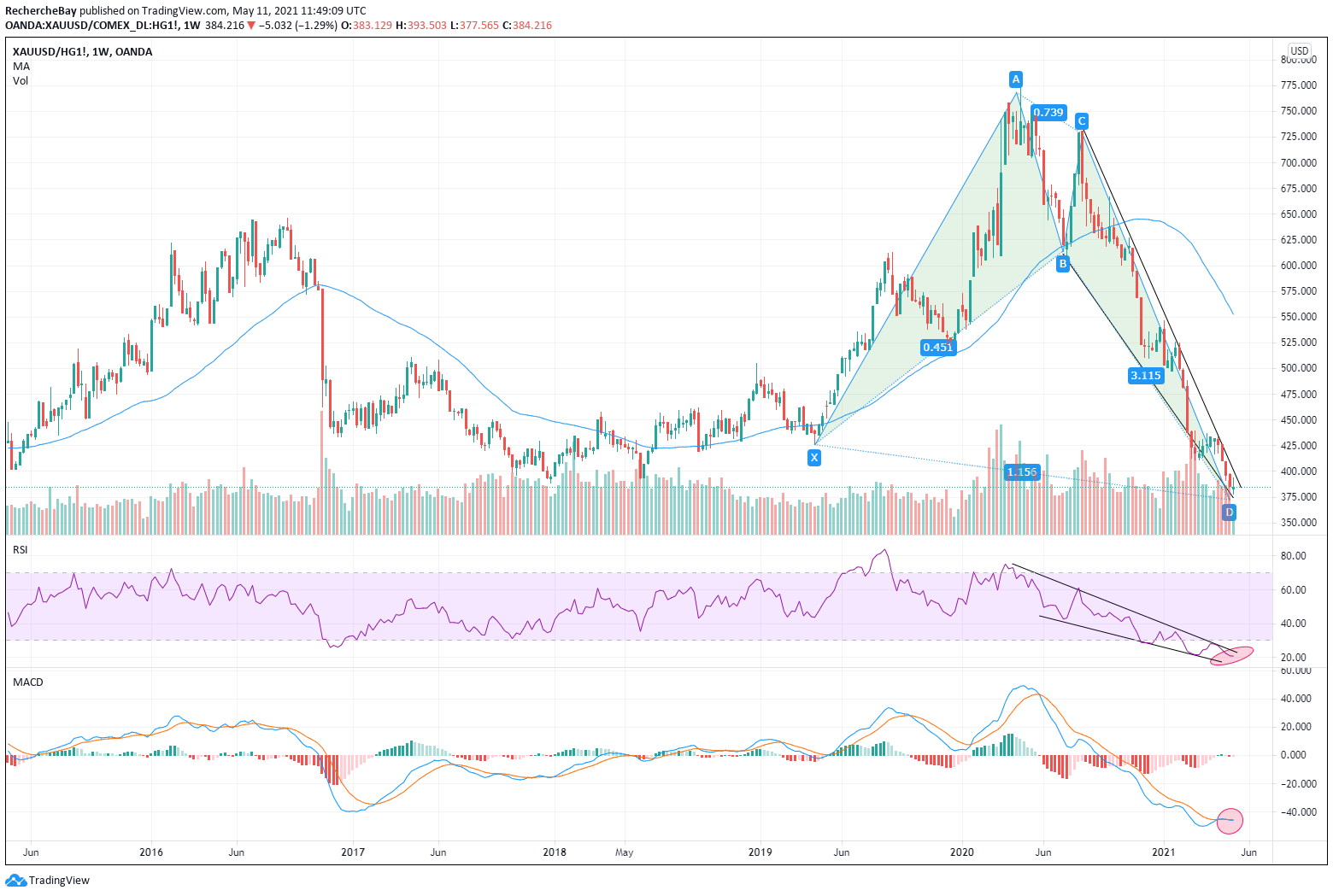 The expectations regarding inflation have moved from anticipation of a recovery to concern about the inflationary effects on the real economy, as revealed by the turnaround in this latest chart. Copper is the thermometer of inflation. Gold is the thermometer of a loss of control by the monetary authorities. Controlled inflation (the phenomenon that made copper rise so high) was manageable, up to a point...but the same cannot be said for uncontrolled inflation, which is starting to have repercussions on the real economy.

The growth stocks are the latest victims of these fears over uncontrolled inflation. The rise in inflation is prompting fears of a hike in rates, something that would have a very malign effect on technological stocks, whose ‘bubble-esque’ valuation is entirely dependent on these artificially low rates.

Faced with this realization about inflation, however, it is the market in general that is starting to effect a genuine correction this week. Since publishing record results, the Internet stocks are coming under a particularly sustained attack, with Amazon even losing more than 10% since being at the highs it had reached.

This correction is particularly noticeable thanks to the SPX500/GOLD chart. The market has broken its bullish support in relation to gold: 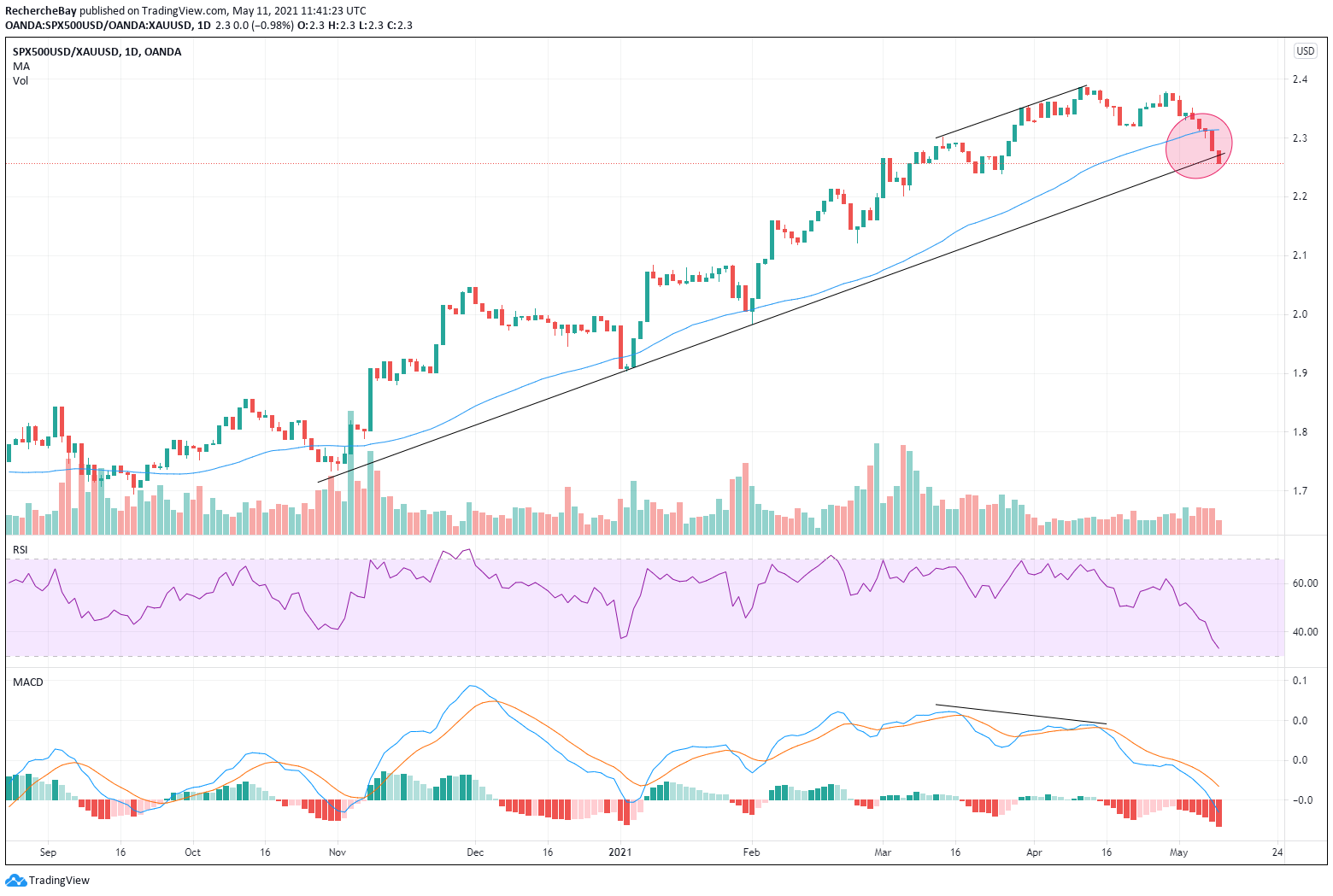 This outperforming by gold in relation to the market is already anticipated by some mining stocks.

Newmont is at just 4% of its historic highs.

The current correction on the markets is restricting, for the time being, a global movement that would affect the entire sector. This leaves us a little time to finalize our purchases of equities in mining stock companies, particularly in the juniors sector, which is still widely under-valued.

The bullish movement in the precious metals sector is now at risk of accelerating upward at the slightest attempt at intervention by the authorities to try to ‘calm’ the disturbance on the main indices.