Gold is now being sold short by a growing number of hedge funds. These sales are associated with the reading of the bearish configuration of the ‘inverted head and shoulders’ figure: 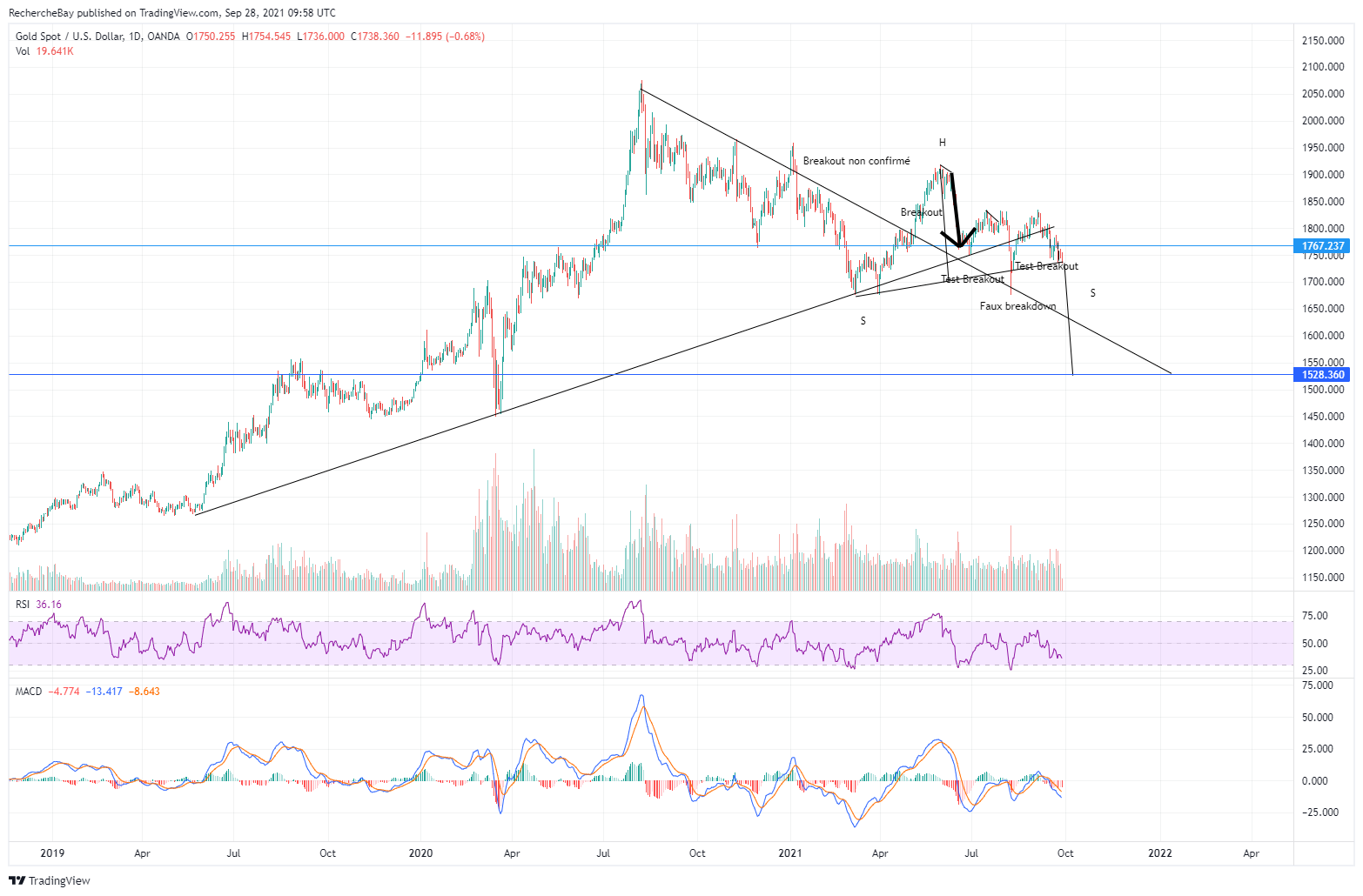 As the funds come in massively short on gold, the bullion banks are very actively reducing their own short positions. 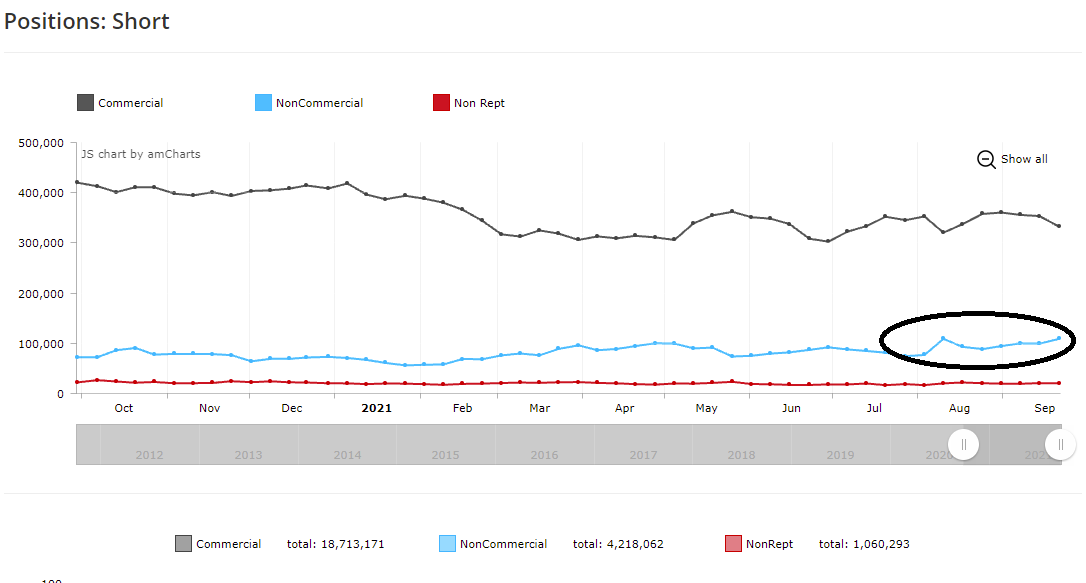 This raid by the hedge funds is taking place in two contrarian market situations: 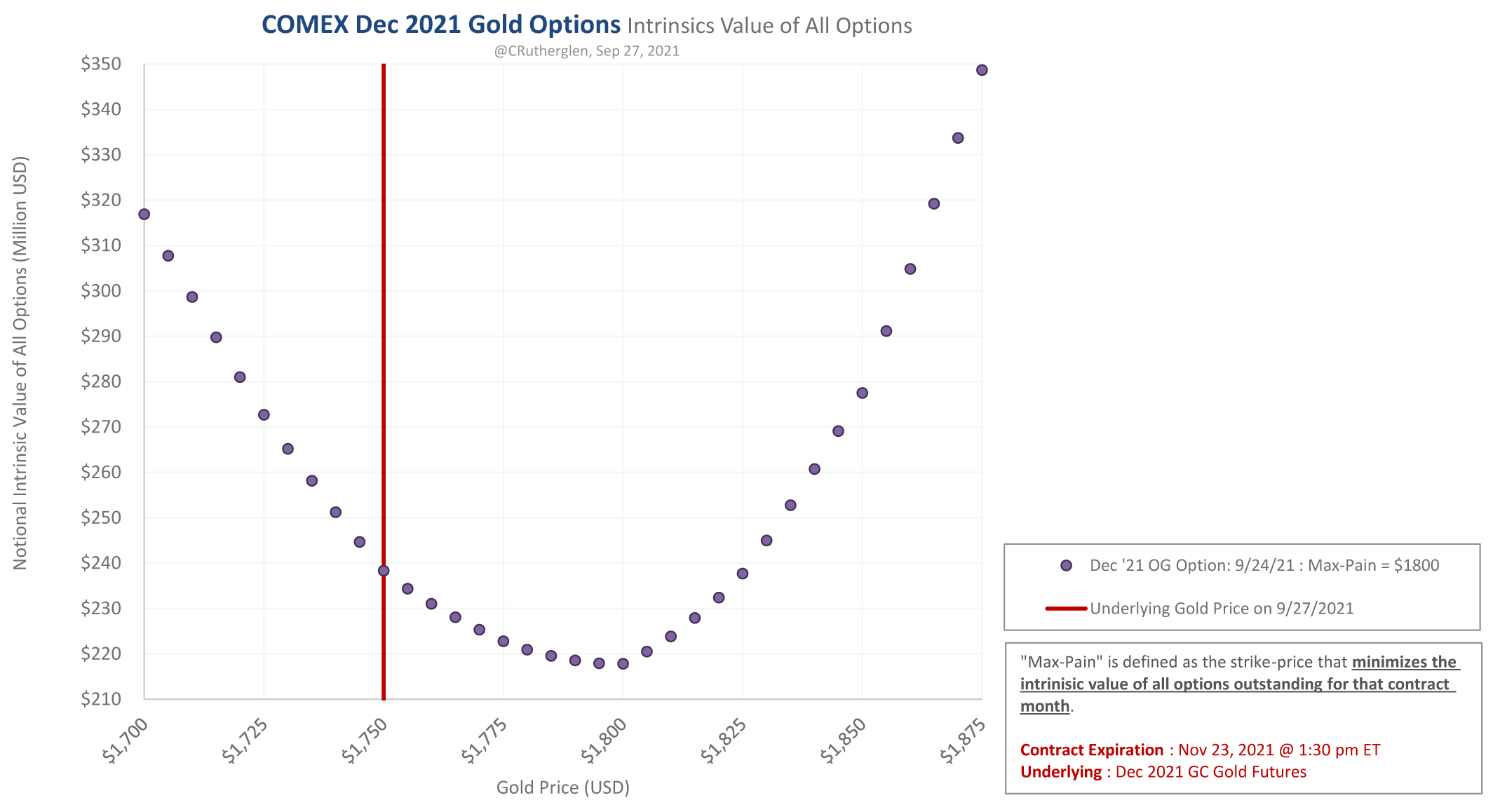 On silver, it is even more visible. We are seeing levels not reached since March 2019: 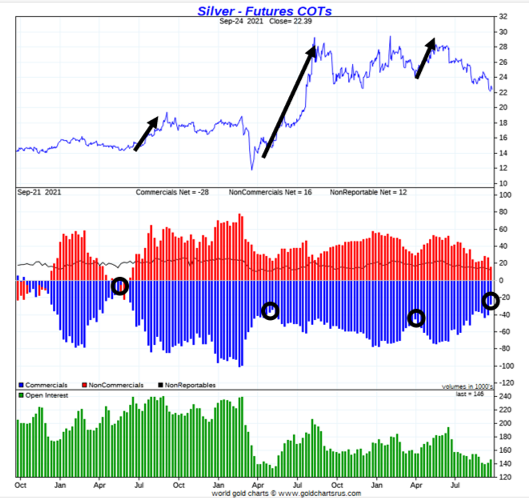 In the past, these two elements were enough to presage a violent bounce-back on the part of the precious metals. It is generally at the precise moment when the bullion banks and the market makers let the speculators start ‘freewheeling’ towards the short position that the markets turn around.

Let us remember, too, that a third of the trades on futures are performed by passive automated funds...i.e. funds that could care less about the macro-economic context, which is very favorable toward gold.

These funds are also following the Forex traders who are watching the breakout of the dollar: the DXY index is breaking its resistance, which had contained it for a year… But if we look at the gold prices in relation to the dollar, we realize that gold ought to be even lower in relation to this indicator. 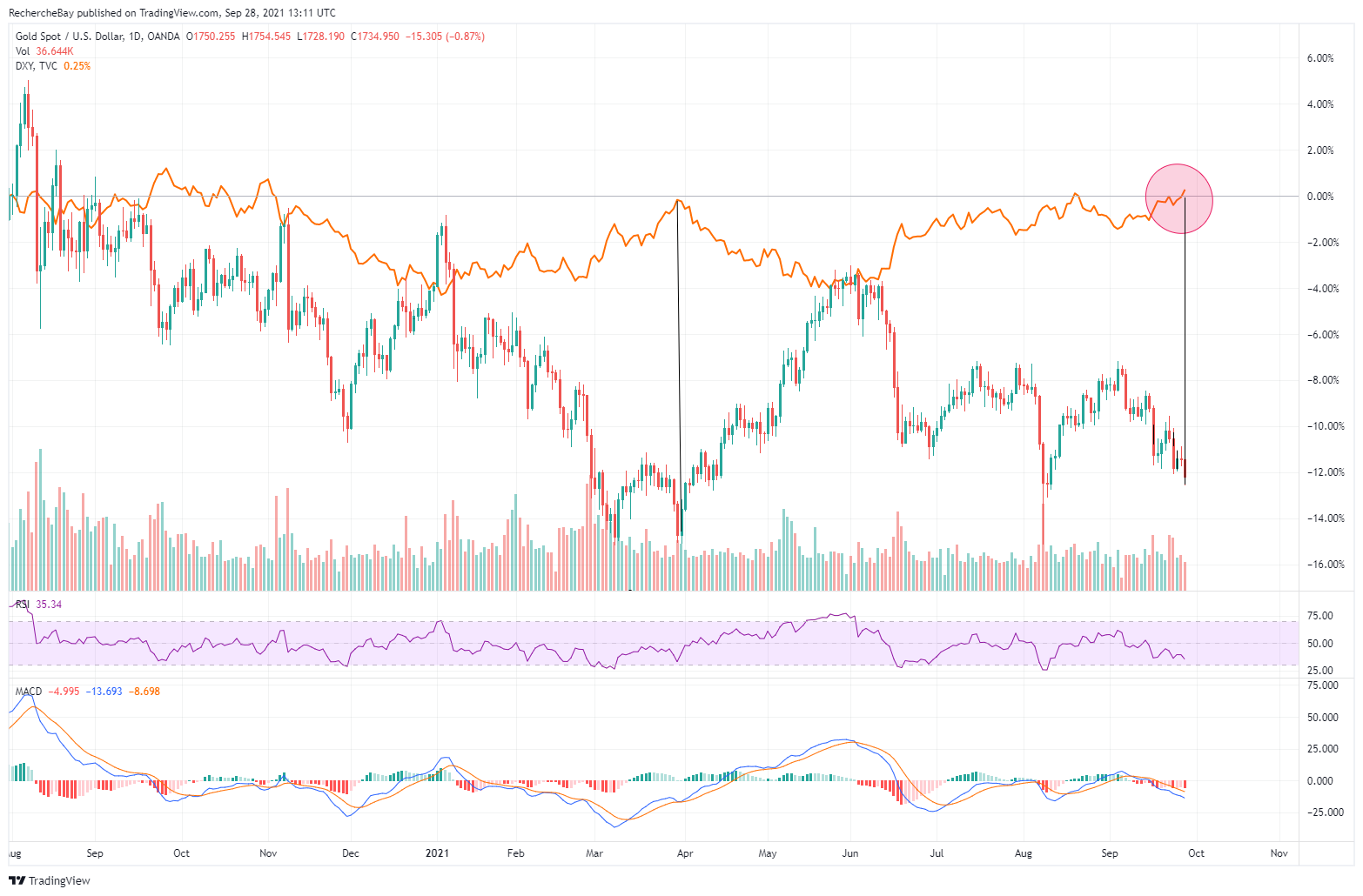 Gold no longer reacts as much as it did before the rise in the U.S. currency. The economic crisis that the markets are starting to feel is bullish for the dollar, but in a far less decisive way than in 2008. U.S. Treasury bonds were sought-after in 2009; today, they are being sold. The situation is completely different and the reflex towards the dollar is no longer as marked as it was at the time of the last financial crisis. 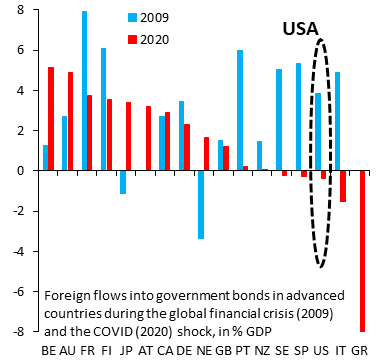 The fact that the funds are now the only ones engaged in this bearish movement on gold logically implies that the next rise in gold will occur on a hedging movement by these funds, and that it will happen very violently. The next rise in gold is going to be very violent. That, indeed, is what explains the spectacular rise in the prices of natural gas right now. The hedge funds are currently engaged in a vast movement of their short positions that has caused them losses of over $2 billion according to the latest estimates. The physical demand for natural gas is forcing these funds to buy their short positions. That is what will happen with gold as well, because right now, these funds are increasingly on their own - as sellers - faced with a physical demand that is exploding.

The presence of these new trading entities, the ever-growing influence of the central banks and the manipulations on the entirety of the precious metals sector have changed the legibility of this market: the gold prices are no longer reacting in the short term to the fundamentals.

It is these fundamentals, moreover, that are pushing the demand that is as sizeable as ever on the physical gold market, which is increasingly uncorrelated with the paper market.

India’s central bank, at any rate, is taking advantage of these low prices to buy record amounts: 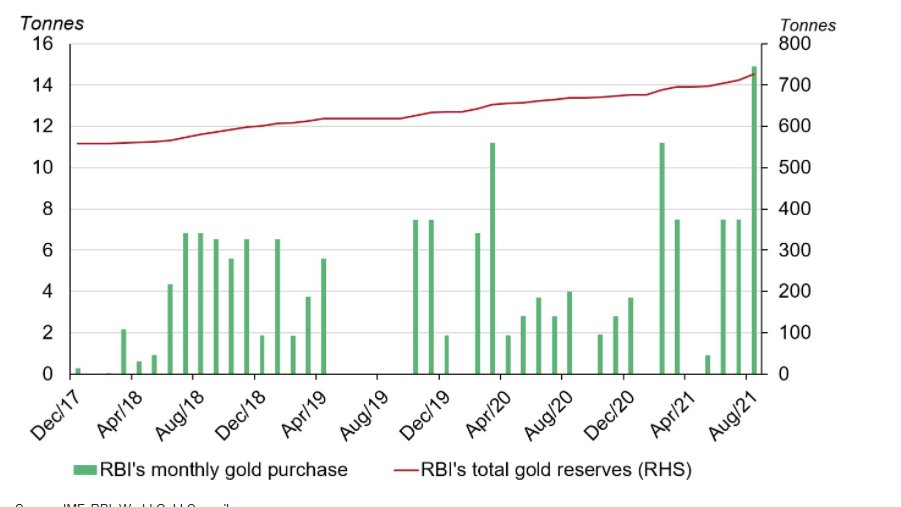 But the gold prices are not responding to the law of supply and physical demand. They are dependent on transactions on the futures markets, where the fund managers have more influence over the prices thanks to their paper investments with a high leverage effect...even if they don’t have a single ounce of metal in their hands. I don’t know how long this phenomenon is going to last, but right now, it is clear that it is more the sentiments of these managers than the physical demand that is shaping the gold market.

The sentiments of these managers is the most important element.

These fund managers do not believe either in an immediate crisis due to the United States defaulting on the debt...or in a worsening of inflation. In fact, they believe what the monetary authorities are telling them; they have an unshakeable belief that the inflation will have only a transitory effect. The fund managers, as a whole, are unanimous on this point: 69% of them remain convinced that its effect will be transitory... 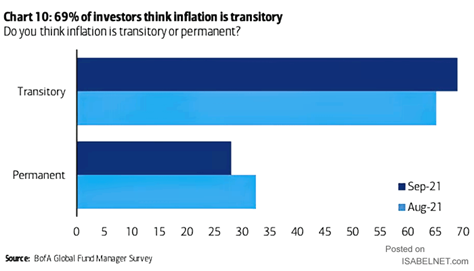 For as long as this impression persists, there will be little chance of a real change of sentiment occurring, in relation to the gold prices in the short term.

We, on the other hand, continue to think that this inflation is not transitory. We have been saying so since last spring in these articles. We have entered a new economic era in which we are only just starting to feel the effects of the monetary policies implemented since 2008, with the sanitary crisis having acted as a trigger for this inflation.

Today, the price rises in the energy sector are in fact far beyond even our most dramatic forecasts. The rise is exponential in Europe and, above all, in the UK: 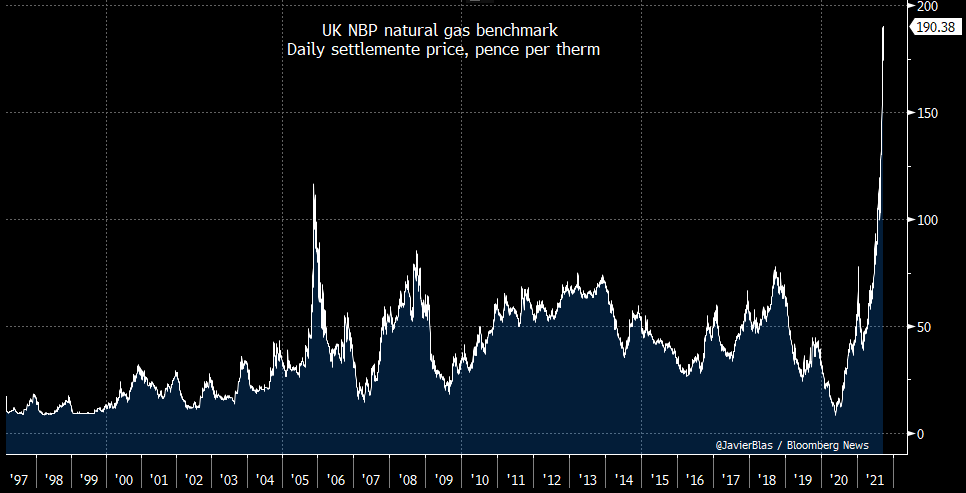 The rise in the prices of natural gas, for instance, is unsustainable, and now poses an immediate problem for the global economy.

Energy costs are skyrocketing all over the world. The customers of Engie, who were complaining yesterday about gas prices going up 12% in a month, should be reminded that the price has just risen by 10% in the last few hours... Not in a month, but in barely 24 hours...

Half of Chinese businesses now have to deal with electricity rationing measures. The government in Beijing has decided that energy consumption must now be strictly limited to the businesses that fuel their domestic market.

The globalization of trade, already heavily impacted by the crisis in maritime shipping, now faces a new threat. The world’s workshop is in the process of shutting down due to shortages of labor and the rationing of electricity.

Our Western societies have based their service economies on the promise that this workshop would always be open. The situation we are observing, whereby the flows of goods face long-lasting blockages, is in the process of dramatically altering the deal, and adapting to this change is an impossible task given the speed at which things are happening.

All the economic players are affected by this. Even a company with a good track-record in e-commerce, which has theoretically had its orders confirmed, is not invulnerable. How can it adapt quickly enough, when confronted with stocks that are no longer available, or shipping costs that are going through the roof? How can it keep on offering free delivery under these circumstances? How can it maintain its cashflow, when rates are going up again, impacting the management of its debt, and sales are becoming ever more irregular?

The rise in the prices of commodities has accelerated in recent weeks: 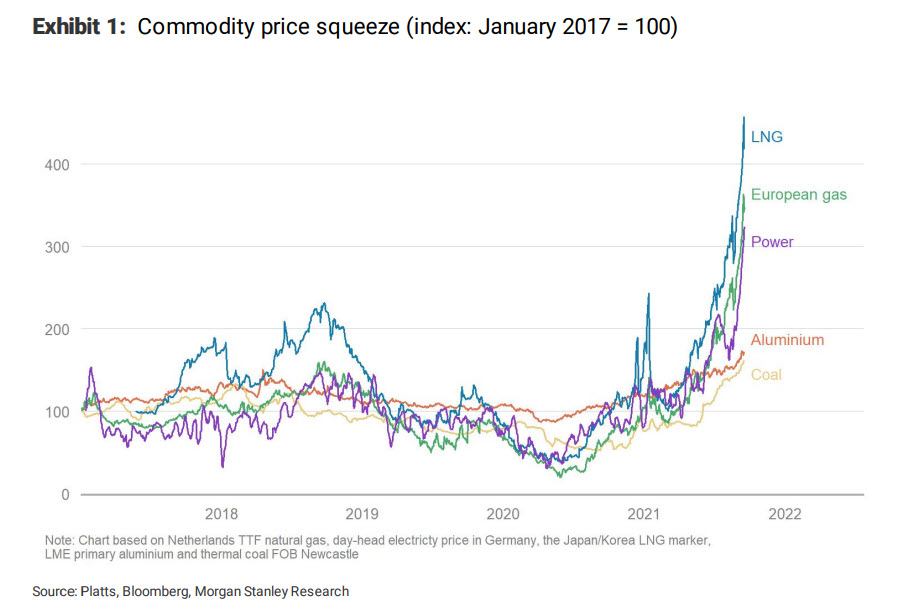 As we predicted, this rise in prices has had knock-on effects on delivery times and on the functioning of the distribution chain. The shortages - the most visible stage of this inflation - have spread to the production units and are now threatening the very functioning of international trade. The situation is out of control and is even prompting the head of the biggest maritime shipping company to call on governments to intervene, to unblock the situation...one that they helped to create, incidentally, with their policy of monetary expansion!

The situation provoked by this brutal rise in inflation is far more serious than anticipated, and I must admit that, even here, despite our warnings, we, too, underestimated just how violent the shock would be.

On the other hand...we are not getting the impression that awareness of this is dawning very quickly on the part of the authorities, particularly in Europe. Christine Lagarde still thinks that the inflation is only going to be transitory and that, if one takes away the rise in commodities, the rise in prices is, ultimately, very limited. It is incredible to hear such a statement, when all is said and done, from the director of the ECB...

As for Mr. Powell, he finally seems to have accepted that inflation effects "have been larger and longer lasting than anticipated” and will therefore not be transitory. Recognition of this has only recently dawned. It appears that the U.S. monetary authorities finally realize the gravity of the congestion in the production chain. This blockage is exacerbating the rise in prices and, at the same time, the economy is at risk of going into recession. This is the famous ‘stagflation’ that we have been talking about for weeks, and that is suddenly rearing its ugly head.

It is highly likely that, faced with this new shock, the monetary authorities are going to be forced to act in ‘panic’ mode once again, particularly if the markets initiate a serious correction, anticipating a plunge in businesses’ results connected to this veritable heart attack in the global economy.