The war that started in Ukraine has already changed everything.

These few days of conflict have already transformed what we have known since the end of the Soviet era, economically, financially and geopolitically. Let's leave the geopolitical analysis to others more competent than me and try to focus on the impact of this war on our favorite subject, namely the gold and precious metals market.

The exercise is delicate: how to report this news while a human civil drama is brewing in Kiev... What is the point of trying to follow the news of gold prices while we are getting closer every day to the threat of a third world war?

Let's try to focus only on the facts that are relevant to the theme of these articles. What is the Russian-Ukrainian conflict doing to the markets we are studying?

Exports from Russia and Ukraine have come to an abrupt halt. Even if the SWIFT system is not completely stopped for Russian gas purchases, the risks associated with the constraints imposed on Russian players make operations almost impossible. Russian business partners have to stop working together from one day to the next, without any assurance of being paid for their ongoing projects. Russian assets are frozen, including in financial institutions in neutral countries. As well as the yen, euro and dollar reserves of the Russian central bank. Faced with this armada of sanctions, Russia has only its gold reserves to support its currency. The country will have to deal with an alternative trading system and a very limited number of trading partners to continue its exports. All Russian players who have a close or distant relationship with the international financial system are affected. The first victim of these sanctions is the market capitalization of SBERBANK, a bank close to the Russian government, which has collapsed by more than 90% in barely a week! 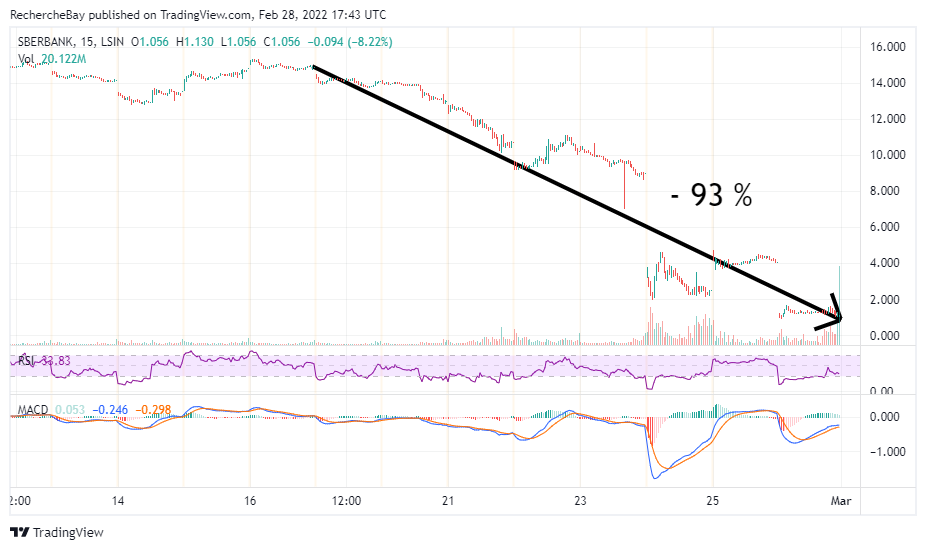 It remains to be seen what impact this fall of the main Russian bank will have on the whole European banking sector. A sector to watch in the coming days.

Russian banks are unilaterally excluded from international trading, and this also affects their participation in the gold market in London.

The VTB bank has been excluded from the list of approved members of the LBMA. As a result, the London market is cut off from all Russian transactions and its partners.

The blockade on the Russian economy and on Ukrainian exports is already causing a strong tension on all commodities, especially on agricultural commodities (fertilizers and grains, in particular).

This blockade is part of a strong tension on the stocks of raw materials. This is even more true in the oil market. The current price of a barrel is below the levels it should have in relation to available oil stocks. Since July 2020, 660 million barrels have disappeared from global reserves. The speed of the collapse of stocks is unprecedented.

This is also clearly visible in the coal market. Chinese importers' letters of credit can no longer be written in dollars. So they have to urgently find another convenient way to place their orders. In the meantime, the tap has also been turned off sharply. Russian coal imports are vital for Chinese power generation.

This blockade is also part of a context of increasingly tense international trade.

This week, China warned that labour shortages and high raw material costs have put pressure on the ability of Chinese small and medium-sized enterprises to handle overseas orders.

China can no longer keep pace with U.S. demand that continues, despite rising prices. The latest business surveys underscore this rush of consumers to buy essential goods in anticipation of inflation. 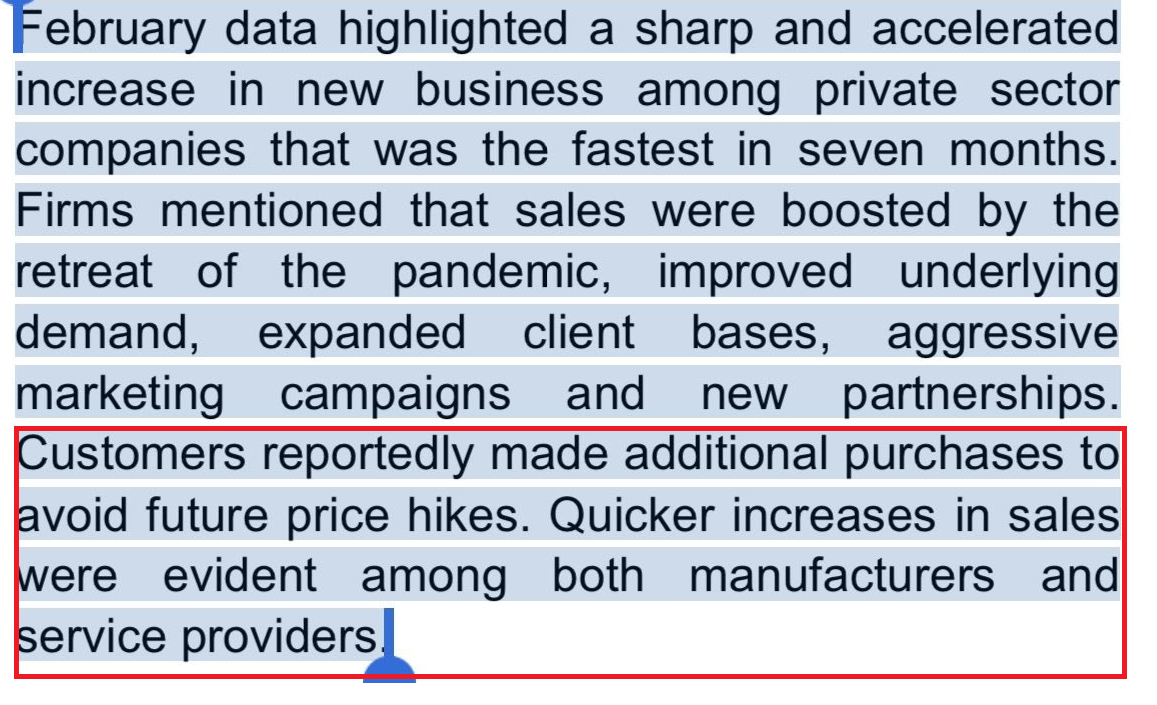 The more inflation is perceived by the consumer, the more demand accelerates. This recovery in consumption is supporting the U.S. economy. The ISM services index accelerated in February (56.7 vs. 51.2 in January).

At the same time, the U.S. is widening its trade deficit.

An article in the California Globe discusses the inability of California exporters to use cargo ships to China: it is more profitable for shipping companies to deliver Chinese goods, return empty and pick up a new shipment in China than to wait for a shipment in California. This is the consequence of the support of the American demand combined with the logistic problems of the Californian ports.

The U.S. deficit is on its way to record levels. By 2021, the deficit will already be 40% of U.S. spending, while tax revenues are at an all-time high. 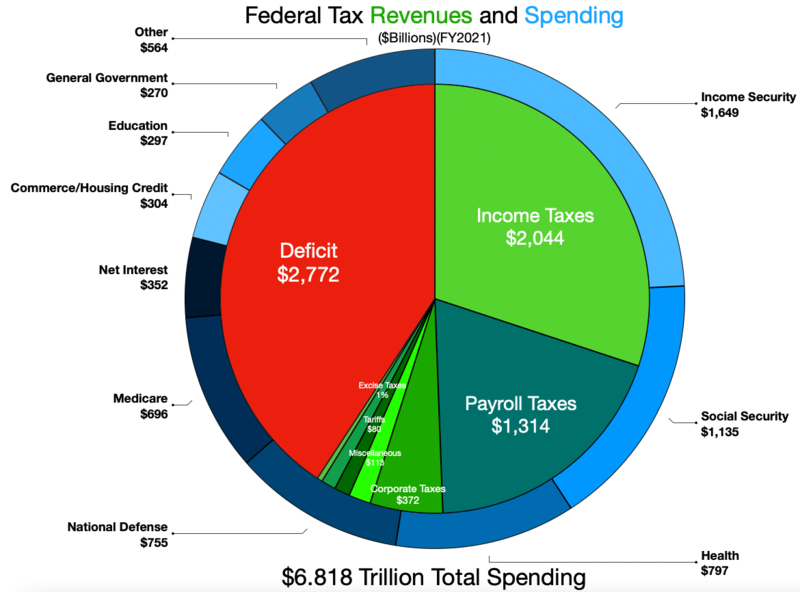 At this rate, in 2022, the United States may be spending twice as much as its resources are bringing in. Since the US central bank has decided to stop buying bonds to fight inflation, sufficient demand will have to be found on the markets to satisfy this avalanche of new debt. Under these conditions, the dollar must remain the international currency of exchange. There can be no financing of the US deficit without the preservation of this status!

The war in Ukraine is shaking things up. With the removal of Russia from international trade, the dollar may mechanically diminish its hold on the share of trade. The countries that will continue to trade with Russia under embargo will do so with other currency alternatives, for example by using oil-for-gold swaps. This decline in demand for dollars is likely to weaken foreign exchange reserves and accelerate sales of Treasury bills held by banks in Asia or the Middle East, which will seek to hedge against the fall in demand for greenbacks. This drop in demand will take place in a context of a nominal decline in the value of the dollar: the inflation caused by the suspension of the supply of raw materials automatically reduces the value of the currency.

This risk for the dollar is an element to be taken into account for the continuation of the war. It is not in the interest of the United States or any other Western country to allow this stalemate to continue. This is likely to become even more visible when these same Westerners realize that Russia aims to maintain this blockade, since it has nothing more to lose on that side. This is the paradox of the sanctions put in place: in the short term they are very hard on Russia economically, but the longer they last the more they threaten our Western economies in the long run, because they fuel the reorganization of international trade outside the dollar.

The dollar could also suffer from a more pronounced slowdown in the U.S. economy, particularly because of the rapid escalation of the conflict. Unlike all post-war conflicts, this conflict seems to be reaching Western opinion more directly. Unfortunately, the economic impact is likely to be felt.

Pressure on the dollar... and a resumption of the rise in real rates. The war completely redefines the Fed's monetary policy in the short term. The markets, which had anticipated a faster and stronger than expected rise in US rates, are now backtracking: the US 10-year is falling again, and as a result, real rates are falling as inflation continues to remain at very high levels.

Fear on the dollar and falling real rates: the war has reignited the two engines of the gold price rise!

Gold is logically benefiting from this new situation. However, this demand is now based on other investment criteria. The ease with which the metal accounts of Russian oligarchs have been seized around the world is likely to develop an even greater demand for physical gold. Owning gold in an institution that can seize assets overnight at the click of a mouse is not exactly the image of insurance. Under these conditions, it is not difficult to imagine a substantial increase in physical gold purchases by clients who will want to unwind their allocated contracts, in which a new counterparty risk arises that this war has just revealed.

This physical demand can already be seen in the volume of transactions at US brokers, as well as in the high level of delivery requests on the COMEX. In the silver market in particular, the amount of metal for delivery in the current month exceeds the official level of available reserves ("Registered" category). Looking at the first few days of delivery, the pace of delivery is slower than usual. This slowdown is occurring as the quantities of metal eligible for delivery are once again restricted. This has happened in the past, and just because there is a theoretical default does not mean that the COMEX will not be able to meet these delivery requests, some of which will likely be settled in cash, or simply deferred. This tension on the COMEX is again putting pressure on physical demand for the next few deadlines.

Short positions in the futures market are increasingly at risk and this is very noticeable, especially in the way silver futures are trading. Silver is being held very tightly below its consolidation level, probably to keep those futures sellers exposed to increasing short squeeze risk as the physical metal disappears from inventory. 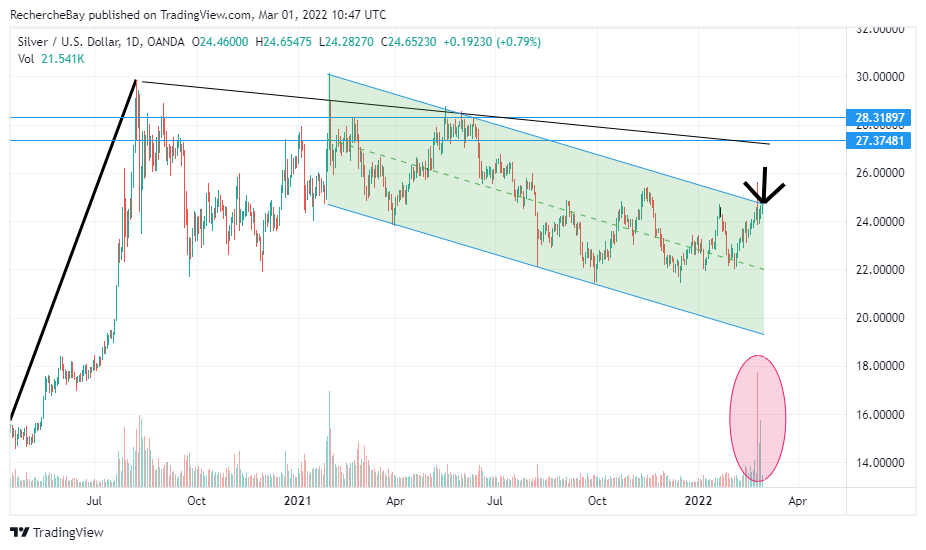