Volatility on the commodities market is accelerating. Against the backdrop of the easing of geopolitical tension in Ukraine, the short-term trend is down.

But the long term fundamentals are still on the rise. These fundamentals concern the very tense supply situation.

U.S. oil reserves (Cushing figures) are at a historically low seasonal level, well below the average of the last twenty years: 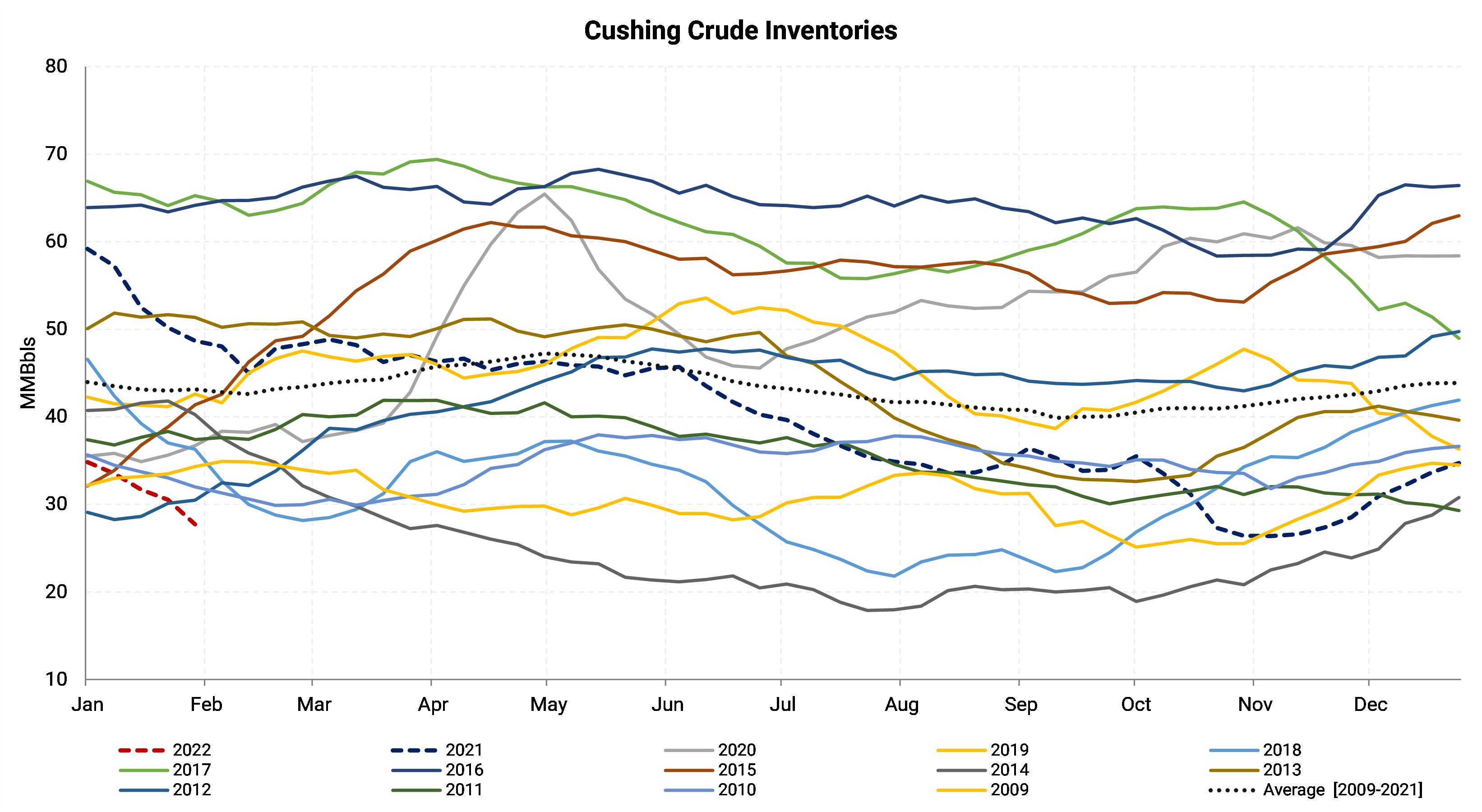 It is therefore not surprising to see such volatility in oil prices as a result of geopolitical news from Ukraine. When stocks are this low, as we have seen with other commodities, volatility increases, and the environment becomes conducive to swing traders who are becoming more and more numerous every day.

Note that, at the moment, this volatility is also affecting gold prices, which are very sensitive to the geopolitical situation. This is not the first time that we have seen gold soar in the wake of a conflict risk... but these surges usually subside fairly quickly when the geopolitical risk diminishes. This environment is a real boon for speculators in the futures markets. Record trading volumes in paper gold are a testament to this. Prices vary by +/- $50 in a few hours... without these volumes having the slightest impact on the actual volume of physical gold traded. 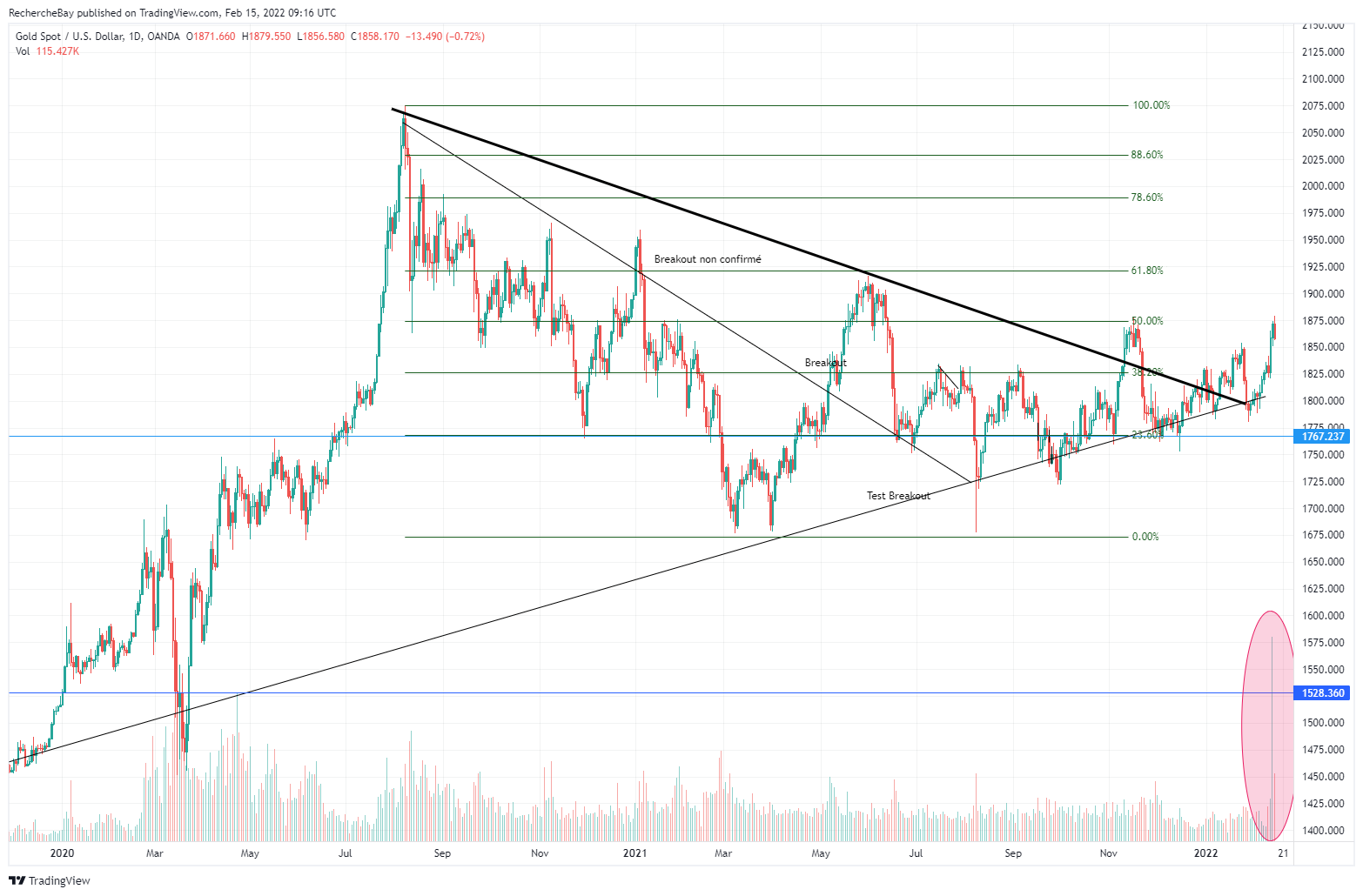 But back to black gold.

Globally, oil reserves have reached a low not seen since 2010-2014, a period when prices were approaching $100. 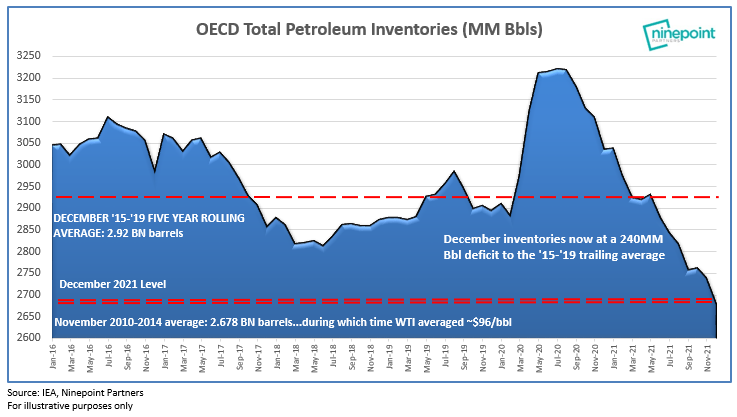 But it is above all the rate at which stocks are being depleted that is worrying. Overall, we are "pulling" on reserves two to four times faster than usual...

This drop in oil stocks is due to several factors: massive disinvestment in carbon energies, new environmental policies, supply problems due to bottlenecks in the production chain, geopolitical tensions (particularly in Ukraine), logistical blockades in Canada... In any case, this situation is affecting all processed products. In Europe, this concerns diesel inventories in particular. The six-month spread for diesel is over $100 per ton, an all-time backwardation record for this oil derivative essential to the continent's economy. In other words, immediate delivery of fuel has never been more expensive relative to six-month orders. And this movement logically maintains the inflationary thrust that we are experiencing: this contagion is now very clear on agricultural prices.

It should be remembered here that, in addition to the effect of currency depreciation on the price of agricultural goods, it is also the rise in oil prices that is driving this price increase. Fertilizer prices are soaring in the same dynamic as all processed oil products. Added to this are recent tensions related to the deteriorating relations with Russia. An AGWeb article explains in detail the impact of these tensions on the fertilizer market in the United States. The U.S. administration is currently caught between its desire to put pressure on Russia by imposing taxes on the fertilizers it exports to the U.S. and the demands of American farmers who can no longer afford the sharp price increases for these same fertilizers.

After the disruptions in the supply chain, price increases in supermarkets are likely to be the news of the next few months.

The other effect of inflation, as we have seen, concerns the energy market. And it is especially in Europe that the situation is deteriorating the fastest.

The European energy crisis is now leading to stock-outs in the aluminum market, with prices soaring to a 14-year high.

This price increase is already having a considerable effect on German industry. Our neighbors across the Rhine are being hit hard by their green strategy, the cost of which is starting to make people cringe. 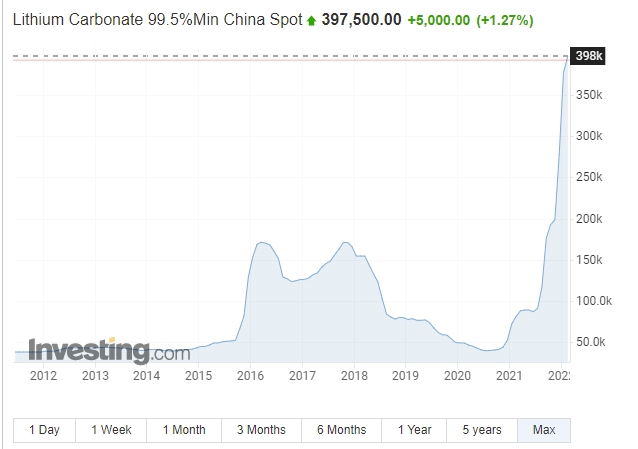 The green energy sector is definitely in a very bad phase. The rise in the price of raw materials for the energy transition is not good news. Germany is not the only country that is in a difficult position with regard to its strategic energy choices. Last year's shift by ESG funds into the energy sector is turning into a disaster in terms of return on investment. This week, Vestas, the largest wind turbine manufacturer, announced a lowered outlook and a 78% cut in its dividend. Meanwhile, oil companies that have been abandoned by investors are increasing their share buybacks and dividends...

The inflation figures (CPI) published in the United States are not a surprise: +7.5%, a 40-year high. More than the figure itself, it is the total lack of anticipation of US inflation, which is getting higher and higher every month, that is impressive. Inflation has beaten analysts' forecasts nine times in the last eleven months! It's hard to do worse. CPI is 275% above the Fed's annual inflation target of 2%. What company would keep a board that publishes such a result so far from its objectives? How can we give any credit to people who are supposed to be managing the inflationary shock, when they have got their objectives completely wrong?

Finally, if we look at the near past, we realize that among all the forecasters, it is the consumers who best anticipated the arrival of inflation!

In May 2020, the one-year expectations of the Michigan index suddenly rose to over 3%, while observers at the time did not even dare to talk about the return of inflation. 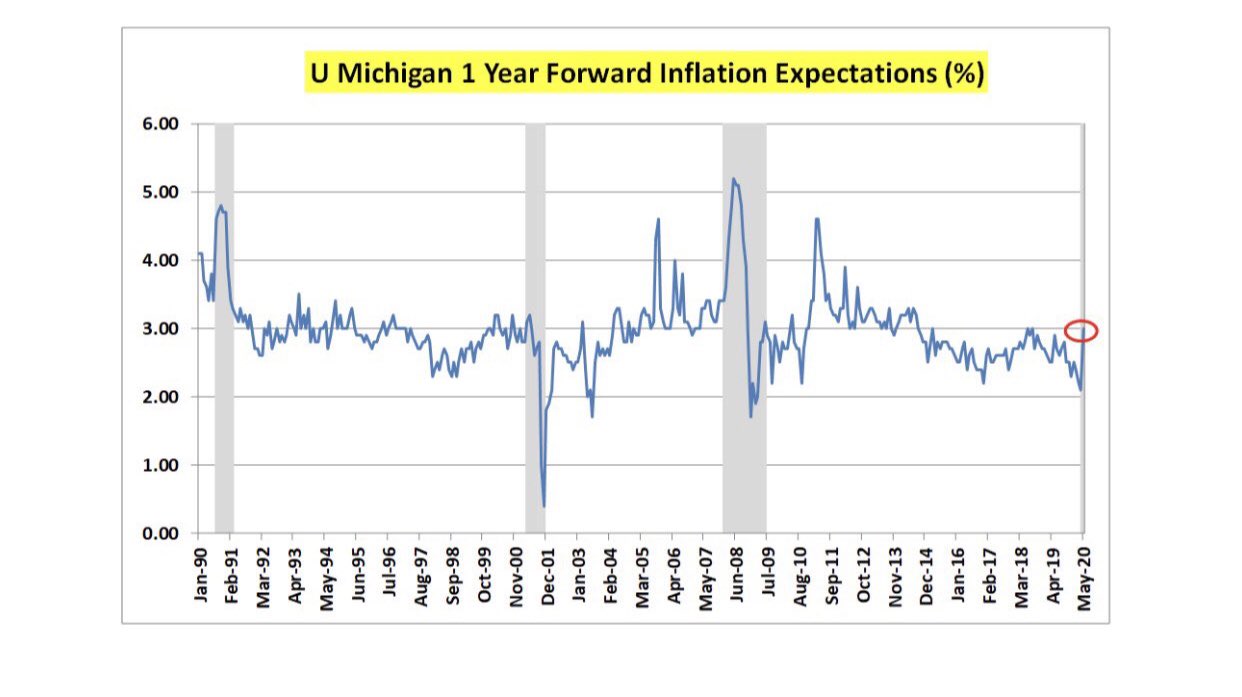 These consumers no doubt sensed that monetary and fiscal largesse would sooner or later have an impact on the value of money, and therefore on their purchasing power.

The least we can say is that this intuition proved to be correct. They even underestimated the impact of this inflation!

Today, they are paying the price of this inflation directly. Real wage levels have never been so low: 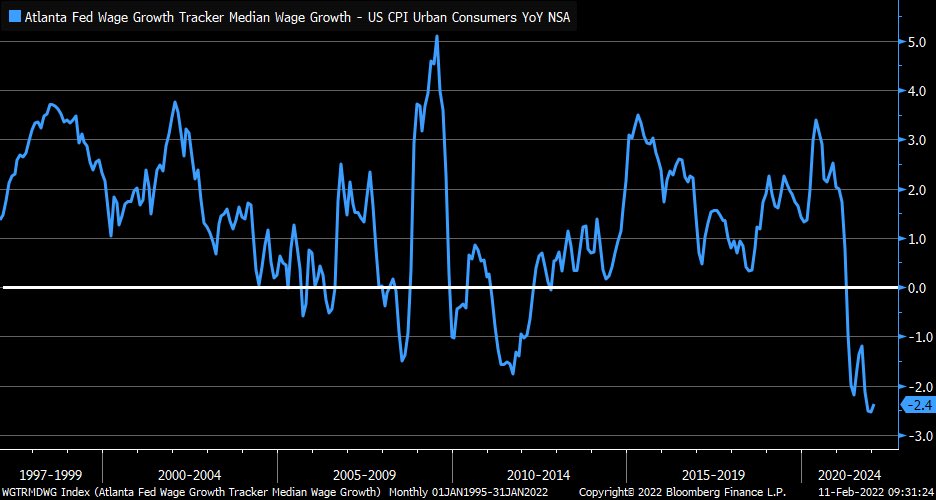 The real wages level has been steadily declining for the past year, adding a net loss to the real share of income each month: 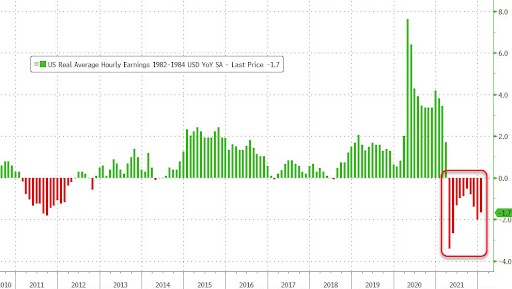 Each month, with each salary payment, we become a little poorer.

This situation is now visible on the ground. Four years ago, in New York City, the wage increase to $11 an hour created an uproar. Today, at $15 an hour, it is almost impossible to find workers who will accept such wages. Wage increases to make up for the loss of purchasing power due to inflation have barely begun. And this increase in wages is likely to fuel a new cycle of inflation in its turn. There are now many more jobs open than there are people officially looking for work (this difference is even at a record level). This is a factor that logically increases the upward pressure on wages. 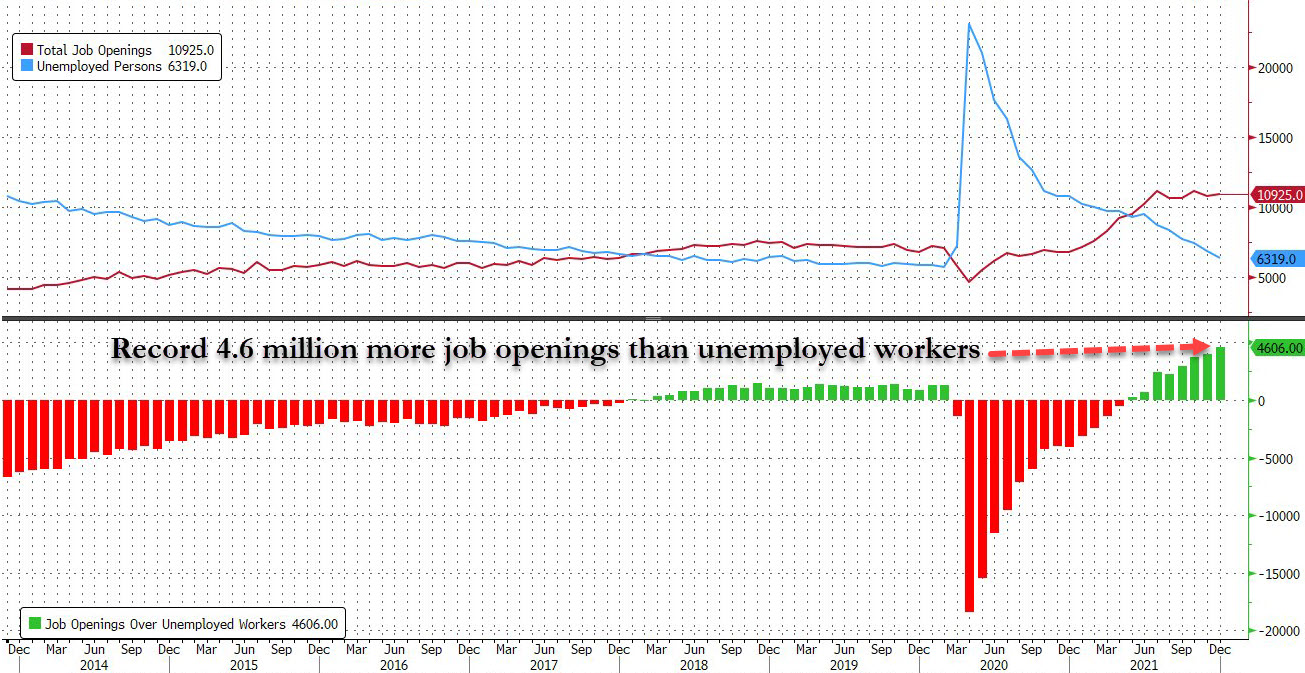 This risk of losing control of inflation prompted one of the elected members of the Fed's board, James Bullard, to warn of an imminent rate hike sooner and faster than expected. This announcement shook the markets, whose bubble levels are supported by the accommodative monetary policy. We have thus seen very strong sell-offs in growth stocks, which are very dependent on low rates. The market is correcting but is not in bearish mode, as shown by the extremely low level of short positions: 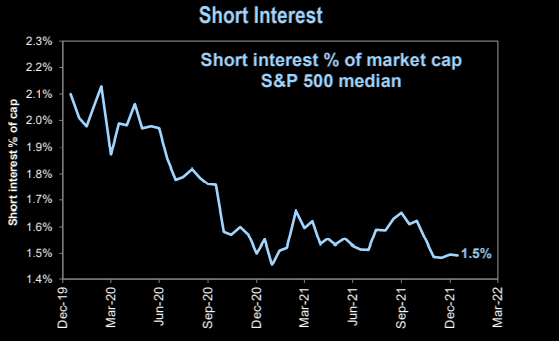 On the other hand, market corrections are (for the time being) supported by share buyback programs and an increase in investments - especially from the retail sector, which is at a record high.

Wage earners are trying to recoup in the stock market what they lose in wages! And these movements increase volatility even further, producing an even greater impression of instability in the markets.

As for the bond market, it is anticipating a rapid rise in interest rates.

The movement is quite spectacular on short maturities. The two-year coupon has fallen very significantly in recent days: 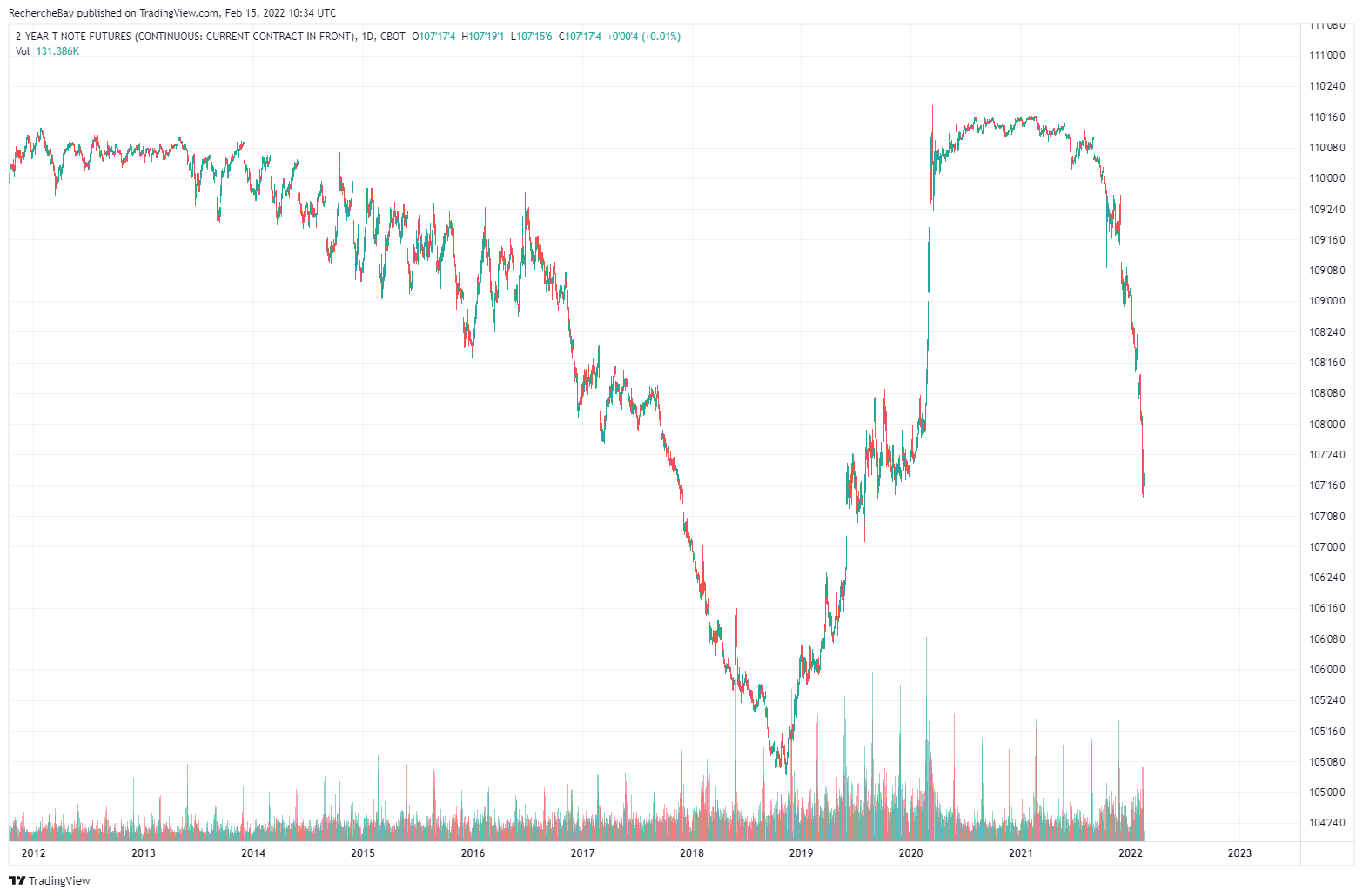 The market anticipates a rate increase. Problem: rising rates increase the government's debt burden. The burden of actual repayments and defense spending is already over 130% of Treasury revenues, and these already large numbers will explode higher with the expected further rate hikes. This will most certainly force the Fed to continue its debt monetization campaign. And when we know that it is precisely these bond buybacks by the Fed that fuel inflation in the first place, we are not about to stop the cycle: on the contrary, the short-term declines in commodity prices are likely to attract new investors who are gradually understanding the long-term impact of the Fed's monetary policy on inflation.

If there is one chart to remember in the current volatility and in the often contradictory statements of monetary policy makers, it is this one: 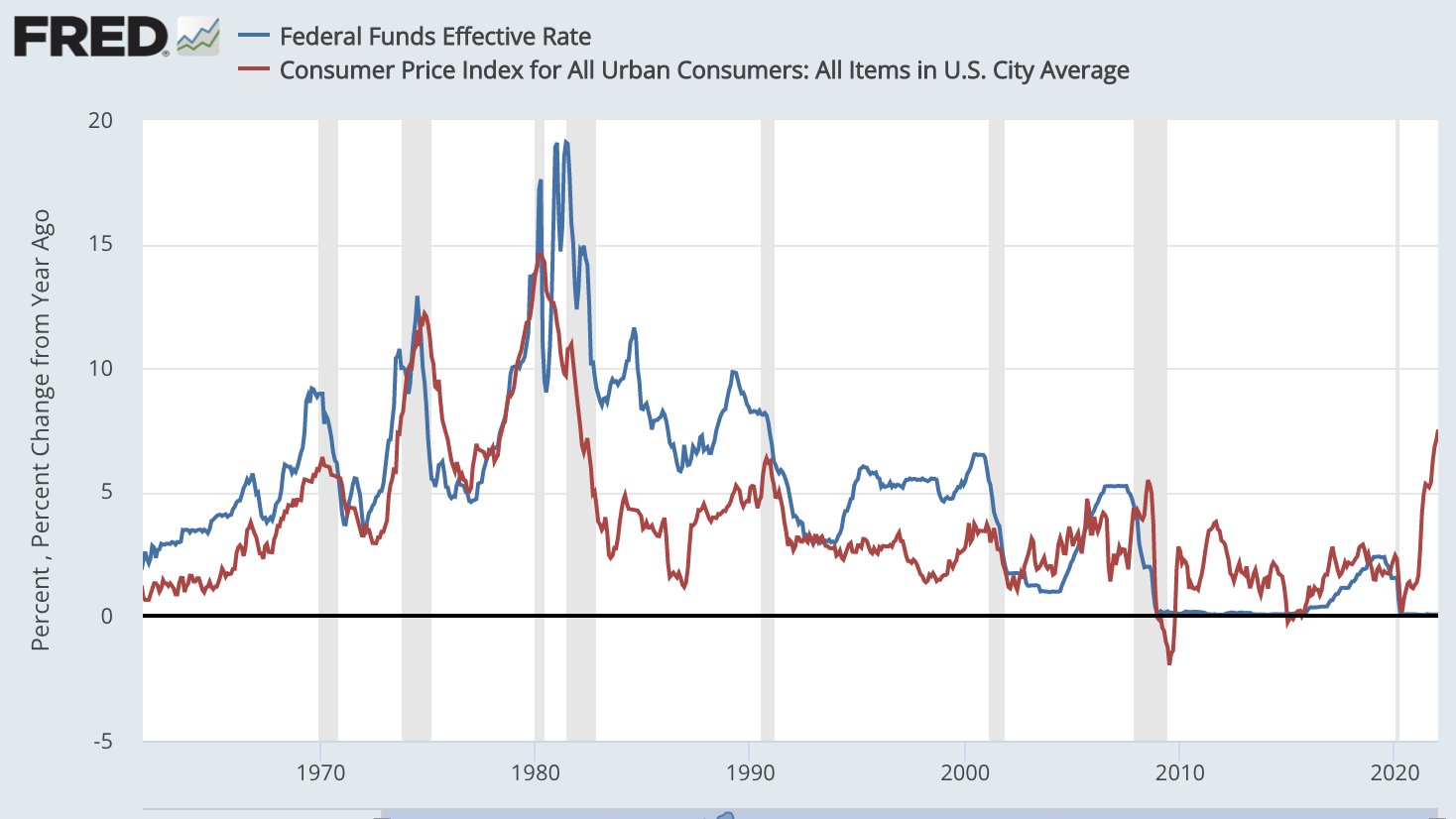 The Fed has never been so far behind on inflation. A 0.5% or 1% increase between now and the beginning of the summer will not change the situation. Whether we are exposed to savings products or whether we earn our income from wages that are constantly falling in real terms, the lack of responsiveness of the Fed and the ECB has already made us very poor in the first months of this inflationary cycle. Never has the red curve (inflation) on this chart been so far from the level of rates set by the Fed (blue curve). Money has never been so cheap relative to the pace of inflation.

After having contributed to the misallocation of capital, and forced an unfair distribution of wealth, the monetary policies of central banks are now plunging us into direct impoverishment, the impact of which will become much more noticeable in daily life.