Not content to have surpassed its all-time high from October 4, 2012 to the end of August, the euro-denominated ounce of gold has again made its mark. At the time, the 1,380 € resistance was only briefly breached, with the price then correcting until mid-December. This was followed by an upward explosion which finally allowed the ounce to firmly establish itself above 1387-1414 € in the week of January 20, turning this zone into a support.

Since then, gold in euros has been navigating in unexplored lands. At the beginning of February, its ascent went wild, bringing the price to over 1555 € at the first fixing on  February 24 at the LBMA.

At the time of writing, the price has stabilized at around 1515 €.

This breakthrough is so remarkable that this time I even found a French media outlet that deigned to title not on gold quoted in dollars, but on gold in euros. Let's hope it lasts...

"Gold: A gold ingot has never cost so much in euros, while the coronavirus is worrying the markets - While the price of gold in dollars has been at its highest since 2013, the price in euros has reached an all-time high given the drop in parallel of the single currency." 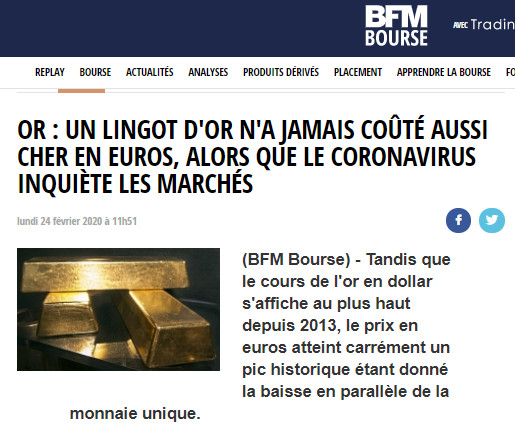 Since the beginning of the year, gold in euros has outperformed the dollar by 11.6%, i.e. 1.7 points more than in dollars, which is a reminder of the importance of keeping track of the price of gold in the currency in which one lives. 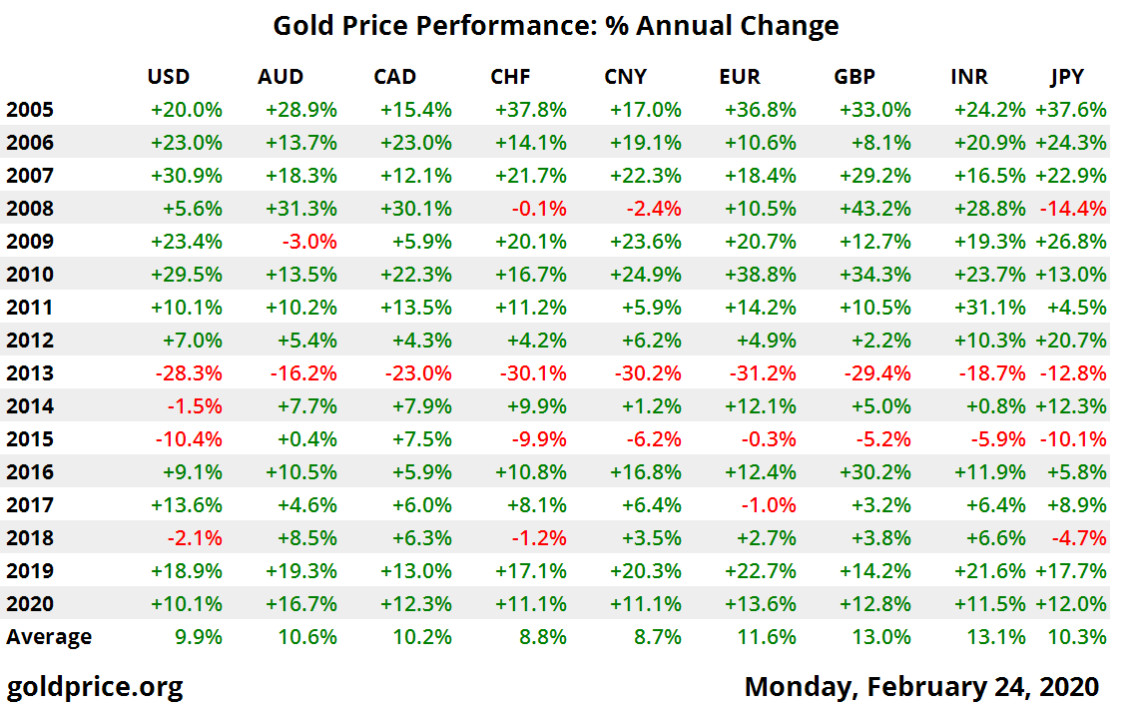 CURRENCIES: ONLY THE DOLLAR RESISTS (FOR THE MOMENT) AGAINST GOLD

Note that some currencies traditionally considered as safe havens by the markets are completely decorated with yellow metal. This has been the case with the yen since the beginning of the year, which is now severely spiking as Japan heads into recession.

Seems that the market has now finally decided that one of the both (JPY and XAU) is NOT a safe haven: pic.twitter.com/obqlu4JjRE

If you are wondering how the euro is doing, I regret to inform you that the debacle of the single currency is continuing, having made its worst start to the year since 2015. A priori, "the year of the euro" will not yet be for 2020! How could it be otherwise with sluggish growth in the eurozone, and in particular the German economy, which continues to slow down?

#Euro is swept up in global funding frenzy and is set for more pain. It’s too early to call an end to the euro’s rout, even after its worst start to a year since 2015. Analysts expect more weakness as neg factors such as carry trades, are still intact. https://t.co/Hx73jCi1Y8 pic.twitter.com/No9obYbO9Y

Only the dollar stands out, but this does not prevent gold from seeing its price rise in this currency - a fact rare enough to be noted.

#Gold develops a life of its own. The inverse correlation between Gold & #Dollar hasn’t been this weak in >8yrs, BBG reports. The 2 assets, which typically move in opposite directions, have both benefited from concerns that the coronavirus may derail econ growth in #China. pic.twitter.com/9Xx7IjTWo2

In short, wherever they are in the world, holders of the yellow metal have reason to rejoice.

"When I'm watching the price of gold!"

CORONAVIRUS: DESIGNATED "GUILTY", BUT NOT RESPONSIBLE FOR AN OUNCE OF 1550 € GOLD AND THE STOCK MARKET PULLBACK!

The climax of the yellow metal's frantic run came during the week of February 17, which was marked by the market's recognition of the risk of a pandemic.

This was particularly felt in equities, as the S&P fell more than 5% in just one week, reminding market participants that the risk can materialize very quickly.

The S&P 500 hasn't had a 5% pullback (on a closing basis) in almost 8 months. Why today's 3.4% decline probably feels worse than it was - investors' baseline emotions are not static but a function of recent volatility and performance. $SPX pic.twitter.com/i27polnxNk

Are the equity markets retreating again to jump higher? We'll no doubt soon find out.

On 19 February, Neel Kashkari, President of the Minneapolis Fed, welcomed the low rates as "a testament to investor confidence" (no laughing matter).

Bank of America confirms that everything is going well and that the big money makers will soon close the taps.

BOFA expects World central banks' balance sheet expansion is to peak in the second half of the year....i'd bet against that .-) pic.twitter.com/pfQSiUILYH

One has indeed the right to be skeptical. At the Fed alone, the market has already priced in 2 to 3 further cuts in key rates for 2020.

And the Fed continues to intervene at full throttle in the repo market.

It is therefore becoming increasingly difficult to believe that we are only dealing with a simple "mid-cycle adjustment", to use an expression dear to Jerome Powell.

As far as I'm concerned, I'm putting my bet on the AGEFI forecast rather than the BOFA forecast.

"This is the problem of the financial world: relying on central banks... - The markets defer to central banks in the face of the coronavirus."

In short, the coronavirus may have propelled the ounce even higher and lowered stocks and long rates, but the roots of the upward movement are much deeper.

"Coronavirus pushes gold to the top - The value of the precious metal has increased by more than 8% since the beginning of the health crisis in mid-January." 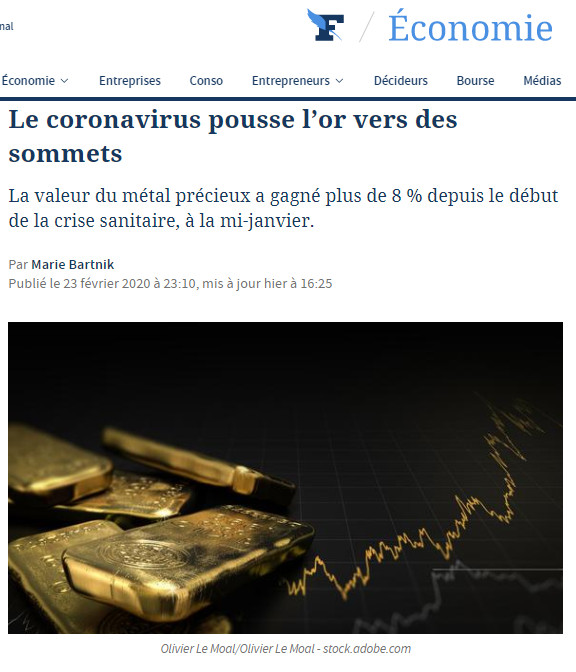 THE MOST DANGEROUS VIRUS ISN'T THE ONE WE THINK IT IS.

At the risk of repeating myself, the extraordinary length of today's economic boom cycle is based on fake causes. Had it not been for the ultra lax monetary policies of all major central banks, many governments and businesses would have long since gone out of business. Nor would US equity markets have risen to nearly 160% of the GDP.

Last week US markets closed at a valuation of 158.9% market cap versus GDP. pic.twitter.com/Kwm9jHFTPe

As Bruno Bertez put it, "Monetary policy explains the high stock market valuations, but it does not justify them. It's very different." If you think that rising equities are based on solid fundamentals and central banks play no role in driving equity markets higher, I'd be curious to know what you think of the following chart. 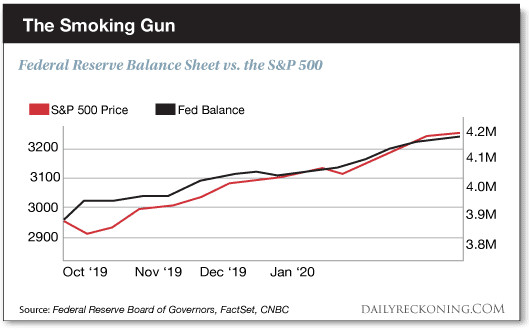 In short, the coronavirus is only a factor in the market turmoil, and not the root cause of the current movements.

The fact remains that if the virus were still with us when the next recession hits, it would be a pretty explosive cocktail.

The times ahead are going to be exciting: in 2020, we are going to find out whether central banks know how to cure recessions and viruses... Place your bets! 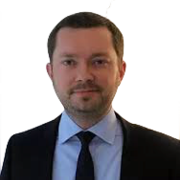