The situation in China has deteriorated significantly in recent days. The U.S Securities and Exchange Commission (SEC) has threatened to delist five Chinese technology companies from the U.S markets, causing a wave of panic on Chinese stocks listed in New York: some flagship stocks have lost more than 10% in one day, the biggest correction in the Chinese technology sector since 2008. This sharp market correction is taking place against a backdrop of bond sales by foreign funds in China. Bloomberg reports that the sale of Chinese bonds by foreign funds is at the highest pace since the last financial crisis: more than $5 billion of Chinese bonds were sold in a single month. 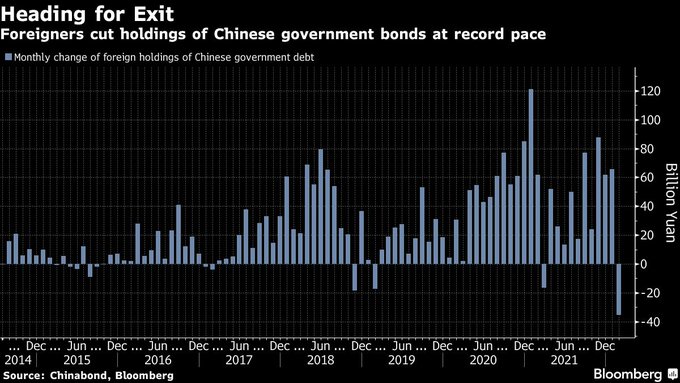 The Chinese real estate sector continues to worry observers. Credit risk contagion is now spreading to what were once very strong players who have had their credit ratings downgraded to junk status in just a few weeks.

These financial tremors come as a new wave of the Omicron variant forces several Chinese regions into total lockdown. There is now talk that the entire country could come to a standstill. This situation poses an additional risk to a supply chain already heavily affected by the health crisis.

The CSI Hong Kong index is trying to rebound from a bigger drop than the one seen in 2020 following the outbreak of Covid in China. 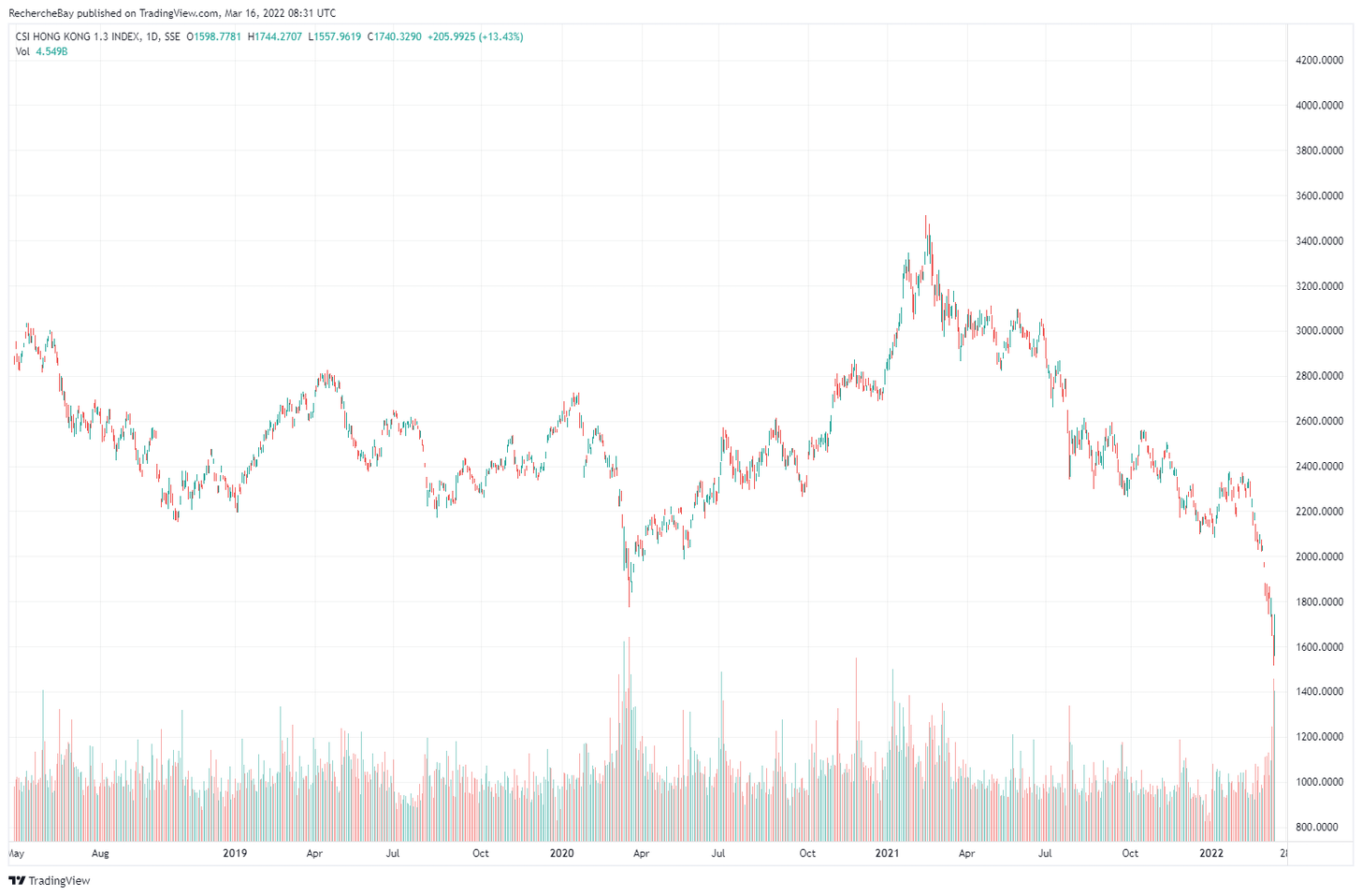 This plunge of the Chinese markets pushed the authorities to a desperate intervention of great magnitude, provoking a historic short squeeze of the HSTECH index of technology stocks, in a configuration of overselling not seen since 2008. In a single intervention on Wednesday March 16, the Chinese State Council promised to intervene on all fronts at once: real estate market, foreign stocks, regulation of technology stocks, dialogues with the US authorities, etc. 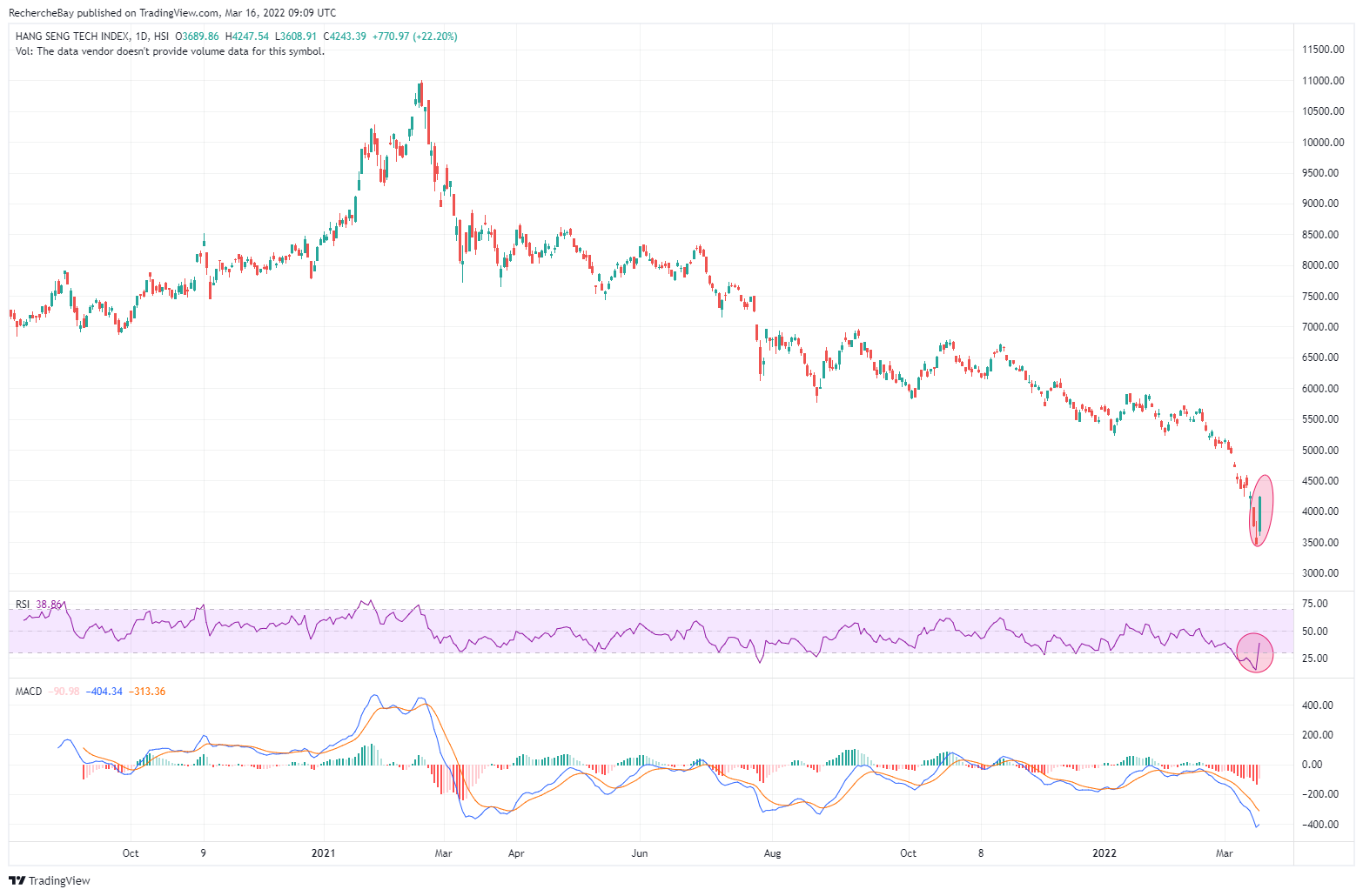 In this context, the Fed's decision on Wednesday to raise its rate by 0.25% gives hope for a concerted Sino-US action to fight inflation. Tensions are now focused on the levels of available supply. The Fed alone is ineffective in this area. Raising rates, even aggressively, is no longer enough. The cooperation of both countries is essential to solve the supply chain bottleneck.

Without concrete results from this cooperation, the new Chinese risks could seriously impact the growth prospects of the US technology sector.

Earlier this week, the NASDAQ index officially moved into bear market territory. A picture of its own sums up the endgame mood of U.S. technology stocks. Microsoft stock has just drawn a daily death cross (SMA 200 and SMA 50). This is the sharpest bearish signal since the beginning of the century for the NASDAQ's iconic stock. 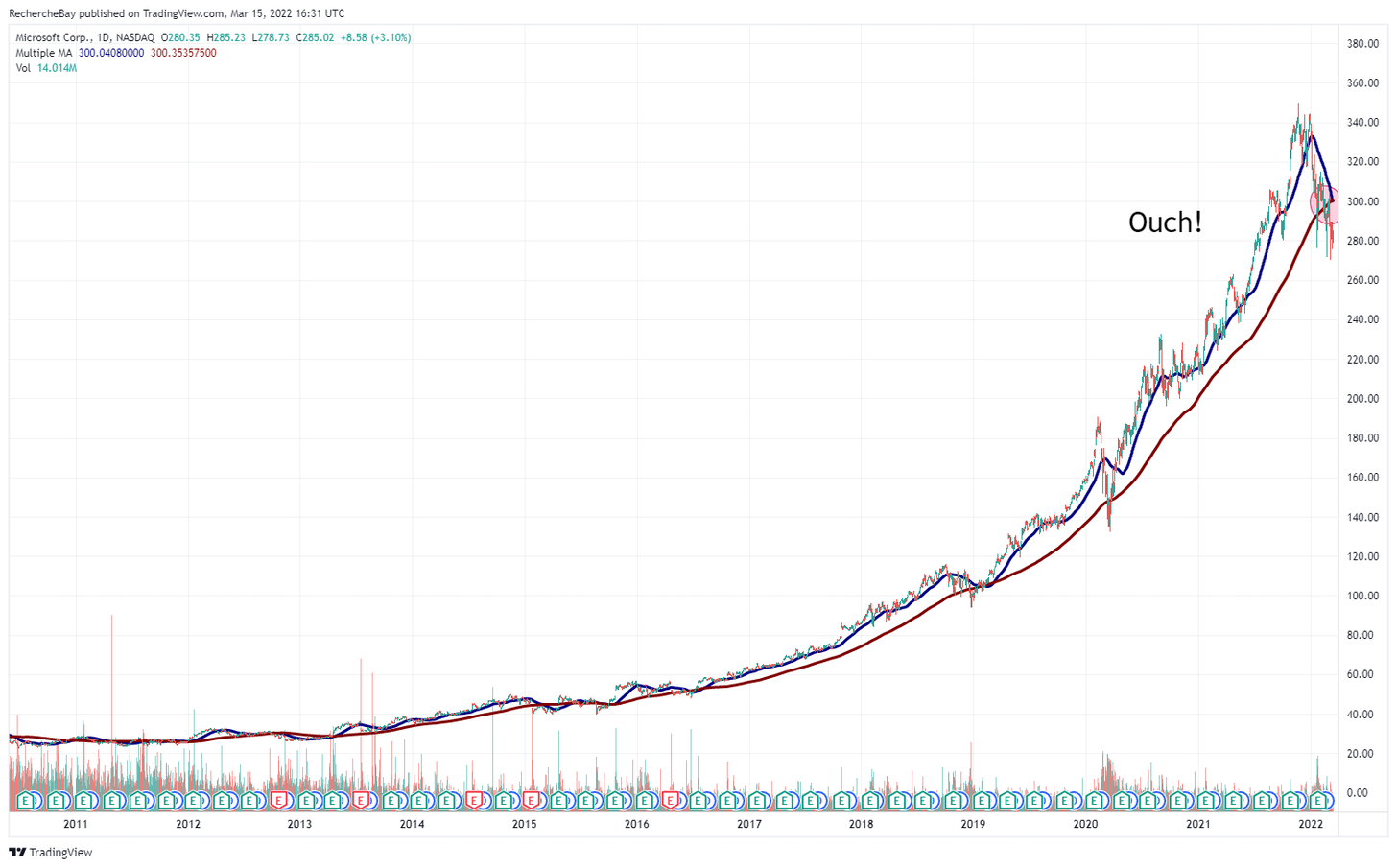 Coordinated action to defend the entire technology sector must take place here and now. Further proposals for direct intervention to defend this critical sector for U.S. growth are to be expected.

This decline in technology stocks is also being fuelled by falling real equity returns, which are currently at unprecedented negative values. 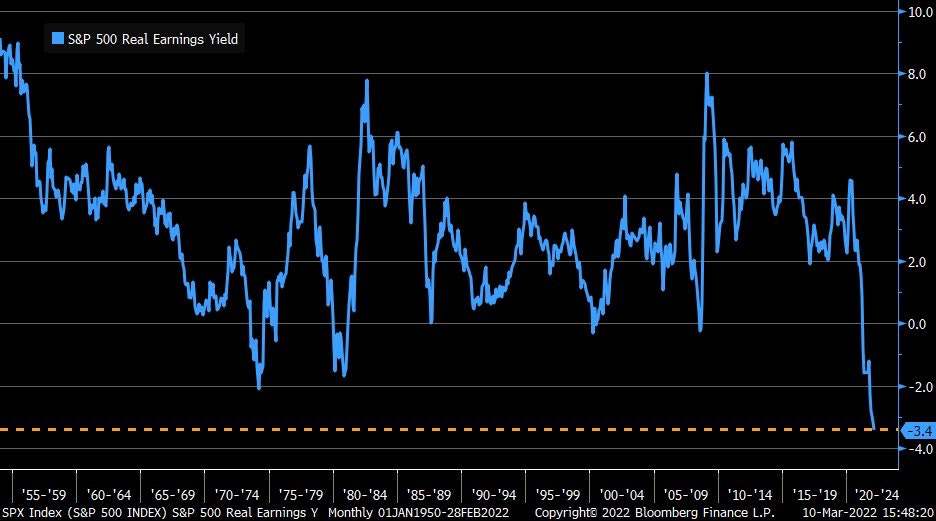 Inflation is destroying equity returns. This is even more true in Europe, where we are seeing massive sell-offs in equities. 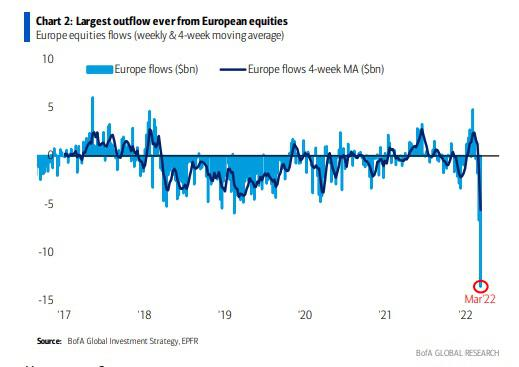 Economic activity is certainly recovering, but this is still far from sufficient to offset the inflationary shock seen on the continent. Prices paid by producers in Italy have reached the mind-boggling figure of +41.8% in annual variation and +8% in monthly variation! 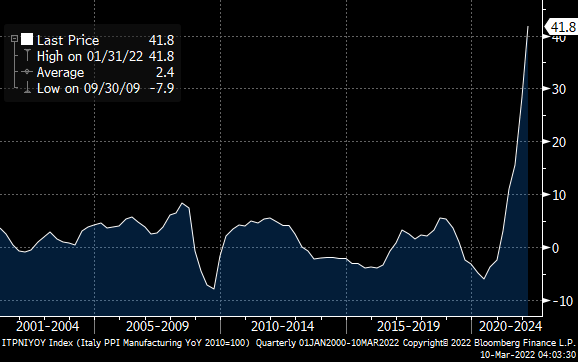 This shock corresponds to the increase in prices paid by producers before the outbreak of the conflict in Ukraine. It remains to be seen how this dizzying rise in inflation will affect the price index paid by consumers.

Recently, we have seen a political will to soften the blow in Europe. The war in Ukraine will not help, but blaming it for the rise in producer prices, which started before, is a thinly disguised attempt to control the contagion of this bad PPI number on the CPI. Other initiatives could be put in place to avoid too much spillover of the inflationary shock to consumers. In such episodes, we traditionally see attempts to control prices. These actions logically lead to shortages, because producers can no longer control their margins and lose money by producing goods that not only no longer earn them anything, but also cost them money to produce. These price controls can take place at the distribution level, but for the past few days we have been witnessing an upstream control on the futures market, which we follow here in great detail.

The nickel market is a perfect example of this desire to control prices. Last week, regulators at the London Metal Exchange (LME) stopped all trading in the nickel futures market. This week, we learned that the same regulators cancelled the equivalent of more than $4 billion in trades to protect one of the participants. The LME has raised the margins on contracts during the trading halt, is imposing strict trading guidelines, and is closing the market if price changes exceed +/- 5%. These new rules are intended to discourage the short squeeze movement that threatened one of the participants, who was about to lose billions if the market had not been closed.

This implementation of price controls on futures puts the entire credibility of this market at risk. There is a risk that demand will shift away from the LME.

One of the essential missions of the futures market is price control. As this 2005 declassified "cable" indicates, the primary purpose of the gold futures market, which was established on December 10, 1974, was to suppress the physical demand for gold and to control its price: 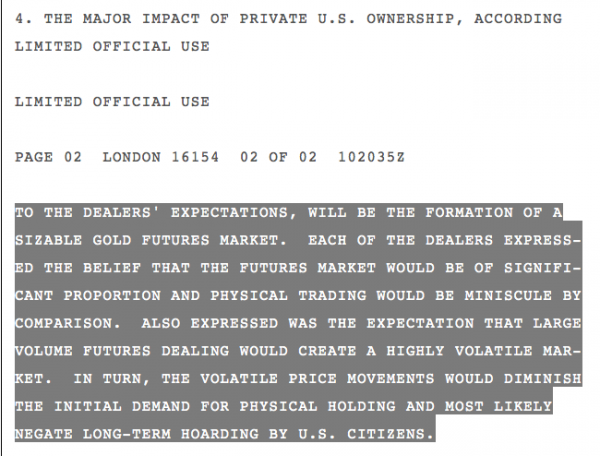 When price controls become too sensitive, as is the case today with nickel, the credibility of the trading system is called into question, which logically forces the market to adapt to another system of "price discovery". We then enter into an out-of-control trading system, where the official prices derived from the futures are no longer the market prices. A bit like what happened at the end of the communist regimes in Eastern Europe. During my trip to Romania in 1989, I remember that there were indeed two levels of prices for everyday goods (gas, food, treatments etc.), because the official price imposed by a bankrupt government price control had nothing to do with the reality of the market.

This is what is likely to happen with the announced failure of price controls on the futures market in a context of high volatility in commodities, and at a time when we are witnessing rampant nationalism over all resources in the world.

In the precious metals market, we are beginning to see a disconnect between official prices, dictated by the price of futures, and the price of physical metal, which is less and less available on the real market.

Premiums are increasing and no longer take into account the sometimes-violent corrections observed on the derivatives markets.

The US Mint recorded a record order of $70 million in gold and silver coins and bars in a single day on Monday, despite premiums that were even higher than last year on most products.

The COMEX market has seen a record number of requests for physical gold deliveries in recent days. It's even more dramatic in the physical silver market, where delivery requests have never been so large so quickly... Nearly 1,700 tons of physical silver are officially awaiting delivery on the COMEX! 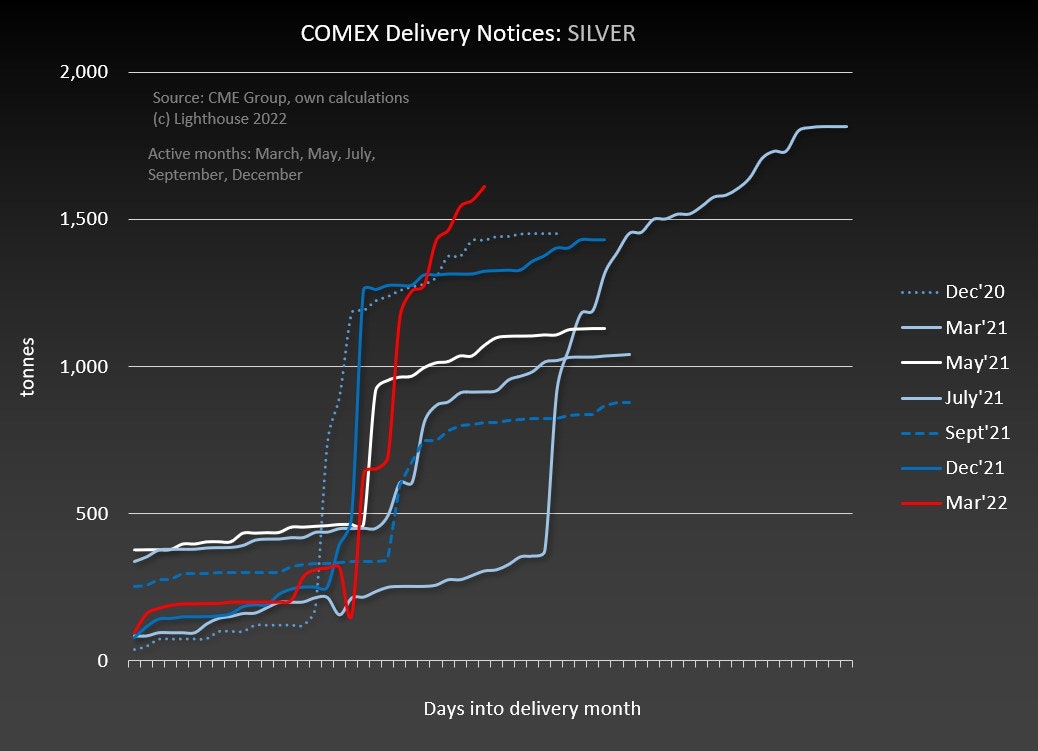 The massive accumulation of physical gold that the introduction of the derivative market was intended to avoid in 1974 is now taking place in the United States, despite the volatility seen in futures prices.

This gold rush is also taking place in Europe, where ETFs correlated to physical gold are up nearly $3 billion in just one week.

In Russia, faced with the devaluation of the ruble, the rush of individuals to buy physical gold is such that the central bank has had to halt its own purchases because of the strong demand. Since the implementation of sanctions, the Russian gold market is almost exclusively domestic. Kazakhstan decided this week to stop exporting gold to preserve its currency, which makes it even more difficult to supply gold to Russia.

With increased price controls and increased trade controls, the price of physical gold is likely to become increasingly disconnected from the official price of the futures market. This movement is likely to accelerate when we see the first shortages of metals, which will be the consequences of these price controls.