The first results published by American companies confirm that the economy is overheating at the beginning of this new year.

Caterpillar has increased its turnover by 23%, driven by very strong demand. The company is filling its order book, but the delivery times for its machines are also increasing significantly. Caterpillar is suffering directly from the bottleneck in the production chain.

Results from the Visa credit agency show U.S. consumption in a very strong recovery: credit spending in January 2022 is up +40% (!) since January 2019, and spending on debit cards is also up +29% from the same period. These figures surprise analysts, the stock soars in the stock market.

The ISM services index is up this month in the U.S., activity is stronger than expected, and unemployment figures also continue to improve.

Consumer demand is accelerating upward. And that's what we're seeing in France as well.

This is less the case in Germany, where industry has probably already been in recession for a few weeks due to the energy crisis and the supply problem that is hitting a very export-oriented economy hard.

There is something broken in the very structure of how international trade works.

Inflation, the result of monetary expansion by central bank policies, is the cause, not the consequence, of this bottleneck in the production chain.

US demand was first stimulated by low interest rates, then by unconventional fiscal measures granted during the lockdowns, and now it is the banks that are opening the credit floodgates. Consumers are taking advantage of this to use their consumer credit at a record pace.

But logistics are not keeping up with this demand.

This is very visible in the inbound/outbound operations of U.S. ports. The Port of Los Angeles is unable to handle the ever-increasing flow of cargo. The port's imports are down, not because of a decline in cargo, but because of the port's inability to handle the increased traffic and to organize the emergency logistics that need to be put in place.

While Americans are drawing 40% more on their credit cards compared to pre-crisis, the port's import volume is down -16% compared to December 2018 (pre-pandemic). On the export side, it's even worse: the decline is -40% from pre-Covid numbers. Exports from the Port of Los Angeles are at their lowest in twenty years!

The disorganization of the production chain does not only affect the United States. The globalization of trade, which in the past allowed for a more fluid and productive economy, is now the cause of increased shortages and longer supply times. It now takes three times as long (or longer) to deliver a container from China to Europe or the United States. 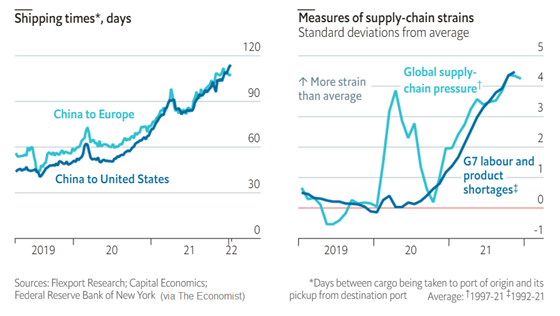 Driven by a historic stimulation of demand, American consumption is booming. This creates bottlenecks in the production chain and sustains the inflation that is taking hold in all areas of society: raw materials, energy prices, food prices... and since the job market is tight, inflation is now spreading to wage levels. Inflation is driving up commodity prices and energy costs, and this upward movement is still going strong. Just this week, coal reached a record high in China, at over $260 per ton: 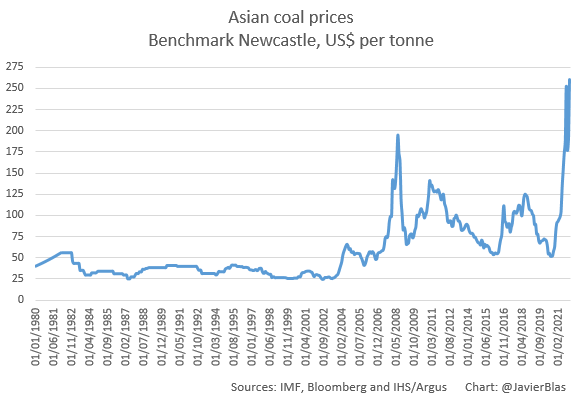 To fight inflation, the Fed chairman has promised to raise rates. This week, the major U.S. banks are releasing forecasts of rate hikes at a steady pace over the course of the year: between five and seven consecutive 0.25% hikes, and perhaps even a direct 0.5% hike in March to curb inflation, which is getting further and further ahead of a central bank that has already been caught off guard for several months.

This abrupt increase alerts several economists who anticipate a sudden halt in economic activity. The expected GDP forecasts for the first quarter are in free fall: 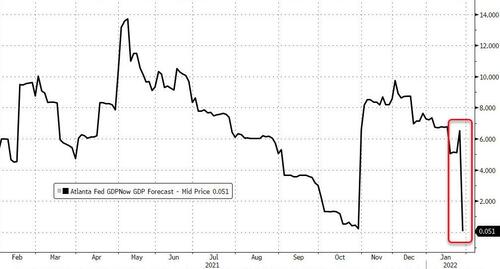 This future "aggressiveness" of the Fed poses a risk of a net halt to this booming economic activity... It also poses a problem for the government's finances.

The good shape of the economy has generated record revenues, up 25% over a year. But with inflation at 7%, real interest charges are still higher than government revenues... In other words, even with an overheated economy feeding the treasury, record tax revenues cannot even pay the interest on the debt, even though inflation is running at 7%. Inflation would have to rise even higher and the economy would have to be even more supercharged for the government to be able to barely pay the interest on its debt!

When you measure the wall of debt that the next repayment dates represent, you quickly see that the equation becomes impossible. 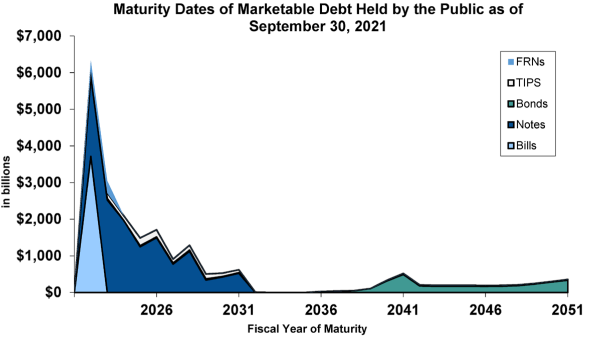 The Fed decided to stop its bond buyback program in March. This February, it is only buying $30 billion, and rates are rising as the market rebalances the price of these bonds to demand. If the Fed completely withdraws from this market, who will buy these short-term debts, at a time when their volume is exploding? Who will "swallow" this mountain of debt over the next five years?

Without a new quantitative easing (QE) program, without additional purchases of this mountain of debt by the Fed, it is simply impossible to have a favorable outcome for either the U.S. government's finances or for the holders of its debt.

Without a new program of securities repurchases by the central banks, default is mathematically impossible to avoid, either in the form of an outright default, or in the form of a massive dilution of this debt by maintaining inflation at record levels over a long period of time, which would cause a massive devaluation of the American currency.

The dithering around rate hike forecasts will not be able to avoid the fundamental question of how to repay this debt.

Investors in gold have understood the impasse in which Western central banks have rushed. There is no simple way out.

Among the gold bulls, there are those who expect a logical resumption of a new QE, which would gradually kick-start the return of a bullish phase in gold. This new program might even be accompanied by a rate hike.

There are those who believe that, even without a new program and with inflation out of control, the dollar will not last long in the face of the rush to protect tangible assets. It is the market that will take over, so to speak.

Then there is a very pessimistic category that expects a financial shock of the same type as the one experienced in 2008, created by a bond crash caused by the too rapid rise in interest rates, provoking a banking panic and brutally testing the entire financial system once again.

In all three scenarios, the long-term price of gold will rise to a level well above that of today. Only short-term movements and volatility in this rise would be impacted under these three perspectives.