Ten years ago, on May 1, 2011, the most violent attack ever seen on the silver futures market took place. It happened on a Sunday night: on the CME Globex electronic market, record sales of several thousand contracts made the price of silver collapse by more than $6 in just 10 minutes. 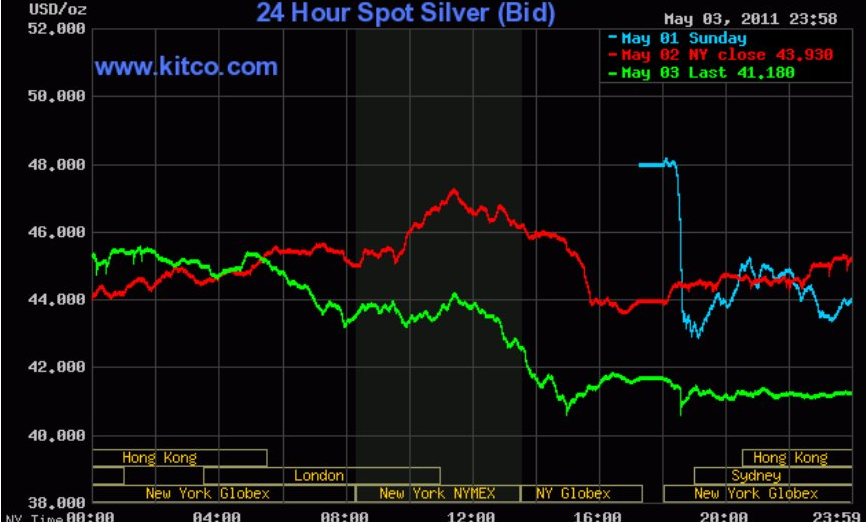 I remember that day as if it were yesterday. At the time, I was in the process of trying to buy a house on architect’s plans, on a parcel of land in the south of France. Ultimately the purchase fell through, because the land on which the developer was working didn’t belong to him. The promoter had been trying to sell something that wasn’t his to sell! Obviously, the trick hadn’t worked, for there are a bare minimum of rules to be complied with in the real estate market, even in the south of France. The futures market is not as well-regulated as that. In this market, deceit and trickery is par for the course. Banks are perfectly capable of selling things that they don’t actually possess. They might even sell an asset several hundred times on this physical silver market. For each physical ounce sold in the world, there are hundreds of paper contracts floating around in the universe of the derived market.

It would take a 9-year wait in order to discover how these banks managed to do something that no shady land promoter has done in the real estate market: sell something they did not own several times over, in order to control prices! All this amid a complete lack of oversight by the authorities who are normally supposed to regulate this futures market. I recall that back then, activists like Craig Hemke, Andrew McGuire and Chris Powell raised questions about the deafening silence coming out of the CFTC, the body that regulates the COMEX, the futures market. There was no shortage of evidence that this market had been manipulated, however. One of the members of the regulating commission, Bart Chilton, now deceased, had tried to raise the alarm about the situation, but nothing was done. The CFTC, directed at the time by Gary Gensler (currently in charge of the SEC), had refused to open an investigation.

In September 2020, after a long trial, JP Morgan was finally sentenced, along with several other banks, for having manipulated the prices of precious metals, particularly silver. The criminal enterprise was ordered to pay almost a billion dollars to the U.S. authorities in order to avoid further proceedings.

So it was on that day - May 1, 2011 - that this major act of collusion, aimed at fixing prices by means of market spoofing operations between brokers from several banks, began. The wrongdoing went on until at least 2015, according to the court’s verdict.

These market manipulations had a devastating impact on an entire industry. The exploratory mining sector literally collapsed between 2010 and 2018. With a price as low as that, how could new exploration projects be justified? Today, we are paying the price for the lack of investment associated with this price suppression.

Take a look at the chart published by SRSRocco. Not only is silver mine production falling, but this production is also increasingly dedicated to investment. 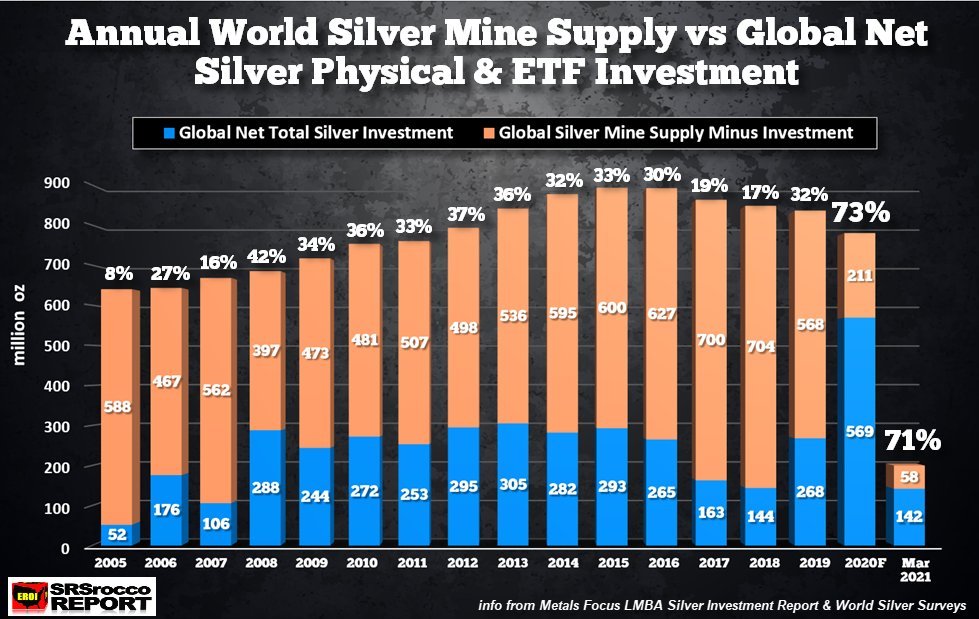 This price manipulation is in the process of taking the market towards a state of rupture that will only become unblocked when the price has increased significantly.

Price control cannot last - it’s mathematical. And yet it is something that’s still happening today. There are still far too many short positions to be protected at any price.

In fact, this controlling of the price of silver is no longer a mystery to any of the participants in this market. The regulatory body has even officially moved from controlling the functioning of the market to controlling prices in the market!

The commission is no longer shying away from explaining its new role.

When asked this week about the Silver Short Squeeze, Rostin Behnam, the current head of the CFTC, congratulates himself on the role played by the institution in controlling the price of silver. Chris Marcus (Arcadia Economics) is quite right to question whether this price control activity falls within the CFTC’s remit...

For investors who lost their shirts during this long decade of price control, under the indifferent gaze of regulatory bodies that are no longer playing their roles as market regulators, and for the entire exploratory mining sector which has been unable to secure the investment necessary for a renewal of the essential resources for the green energy revolution that has been announced, now is the right moment to call time on this and declare that the game is up.

The Silver Short Squeeze that occurred this February had worldwide repercussions. It prompted record levels of tension in the physical silver market and forced the banks, which were massively short on the metal, to further increase the leverage effect on short positions that were becoming increasingly fragile.

This movement has shaken up all of the custodians of the metals, who must now respond to clients who are increasingly anxious about the authenticity of their metals accounts. We know that today, the silver market is founded on a derivatives system where there are far more virtual owners than there are ounces of metal available.

Marking the 10-year anniversary of the start of the massacre on the silver market, Craig Hemke (TF Metals Report) launched an appeal to initiate act 2 of the Short Silver Squeeze. According to his calculations, if 100 000 people buy 1000 ounces of silver, this derivative system will collapse, regardless of the efforts made by the banks to spoof the futures market, or by the regulators, to “control the price”.

The r/WallStreetSilver community, which already has more than 60 000 members, has sprung into motion again, and is calling, in turn, for a new rush on silver between now and the end of next week.