This week we are seeing a further worsening of the situation in Europe where the prospects of a recession have pushed the euro below parity with the dollar. The euro is at its lowest level since its introduction. On the one hand, European exports are on the verge of collapse as electricity prices rise, and on the other, Europe is now dependent on increasingly expensive energy supplies. Europe is becoming poorer, so its common currency is logically falling in relation to other currencies. At the same time, tensions are returning to the bond markets. The Italian 10-year suddenly shot up to more than 4% at the beginning of the week, before a (most likely) concerted intervention by the ECB calmed the fever.

This intervention comes as part of the anti-fragmentation tool, which consists of the ECB buying government bonds that are going off the rails by drawing on its pool of less risky bonds. This move had already brought down the pressure on the Italian 10-year in recent months. 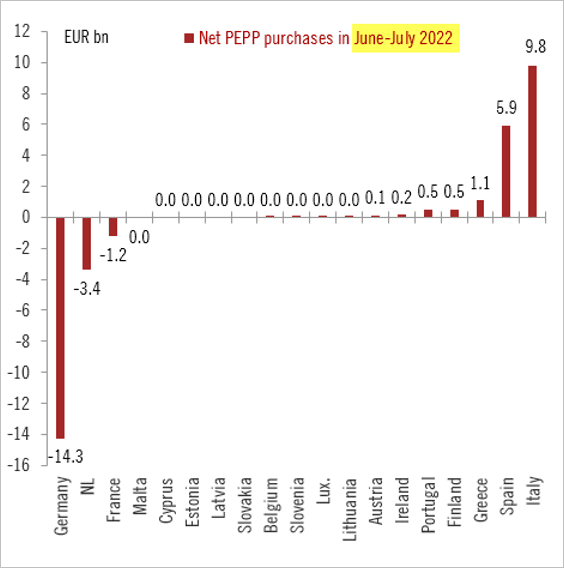 But the ingredients for a new sovereign crisis in Europe are there. With the current level of inflation and the euro, the ECB has much less room to fight this new crisis this time. It is a huge challenge that awaits Mrs. Lagarde. The solidarity of the eurozone countries is likely to be severely tested in an unprecedented context of strong recession and rising inflation.

These threats are obviously weighing on the markets, although we should not forget the dark clouds gathering over the Chinese economy, as well as the US slowdown.

China is also facing an energy supply problem. Local authorities in Sichuan province had to force a total shutdown of factories in the region between August 15 and 20. The economic slowdown is already evident in the decline in shipping prices, particularly on the China-California route. 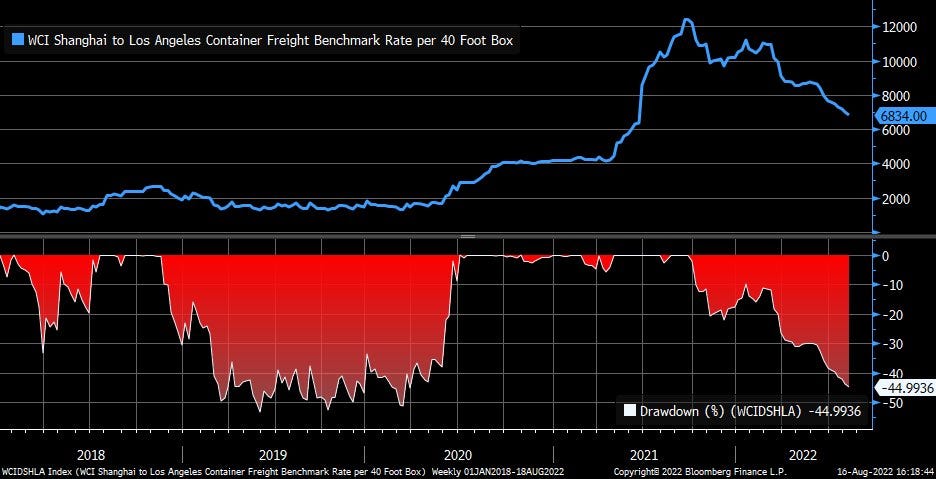 China is exporting less due to reduced production capacity and stalling US demand.

In the U.S., business inventories are soaring to all-time highs:

The warning from Target, one of the major US retailers, confirms this poor short-term outlook. TGT stock has erased in one session almost all of its post-Covid gains on historic trading volumes. 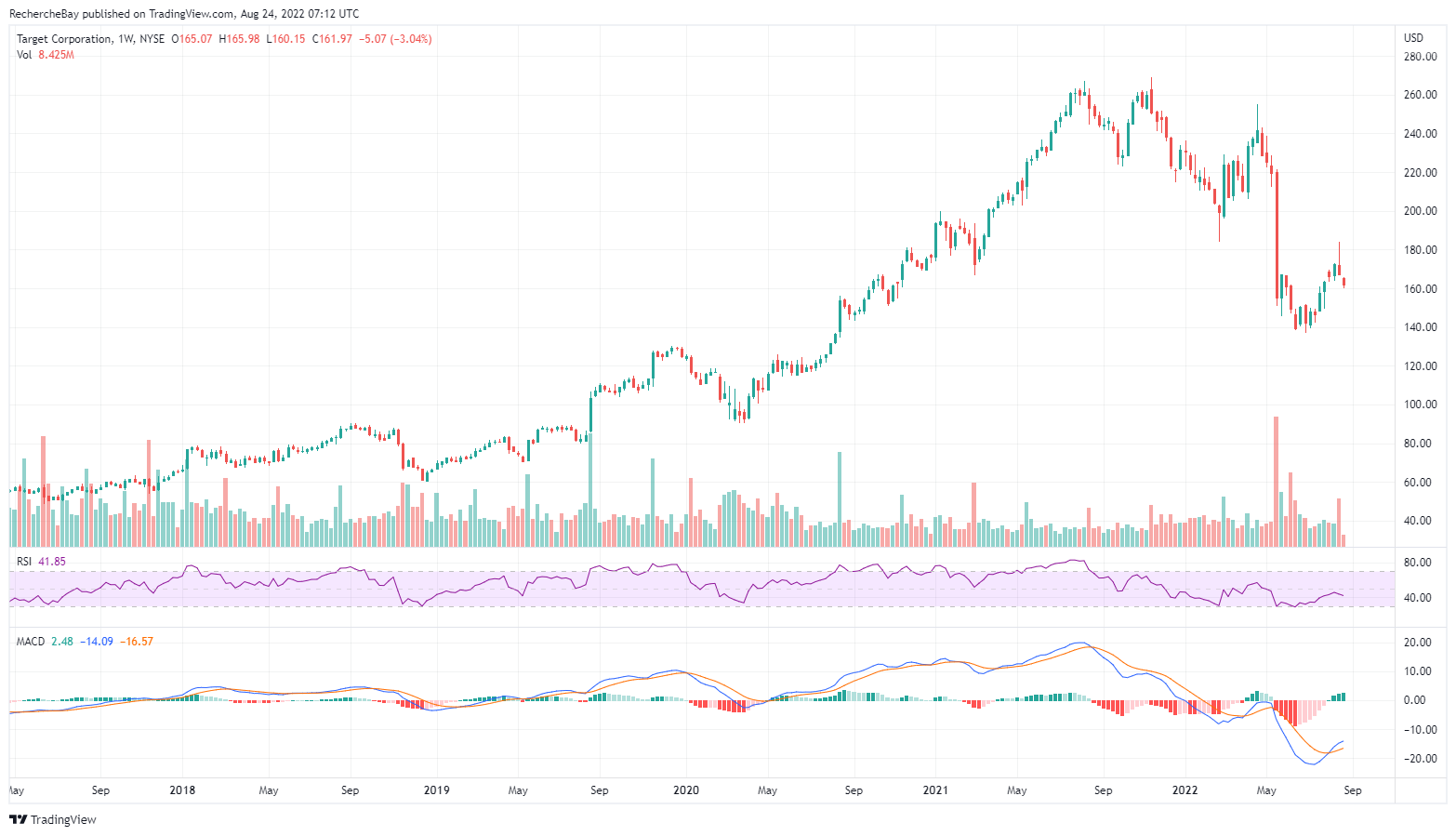 The latest U.S. PMI figures show a contraction in the manufacturing sector. Services are also slowing down:

The housing situation is the biggest threat to the US market. Home prices are ultimately far more important than the price of a gallon of gasoline for household morale and the engine of American consumption.

The latest figures for new home sales are at an all-time low and confirm the imminence of a severe housing crisis in the United States: 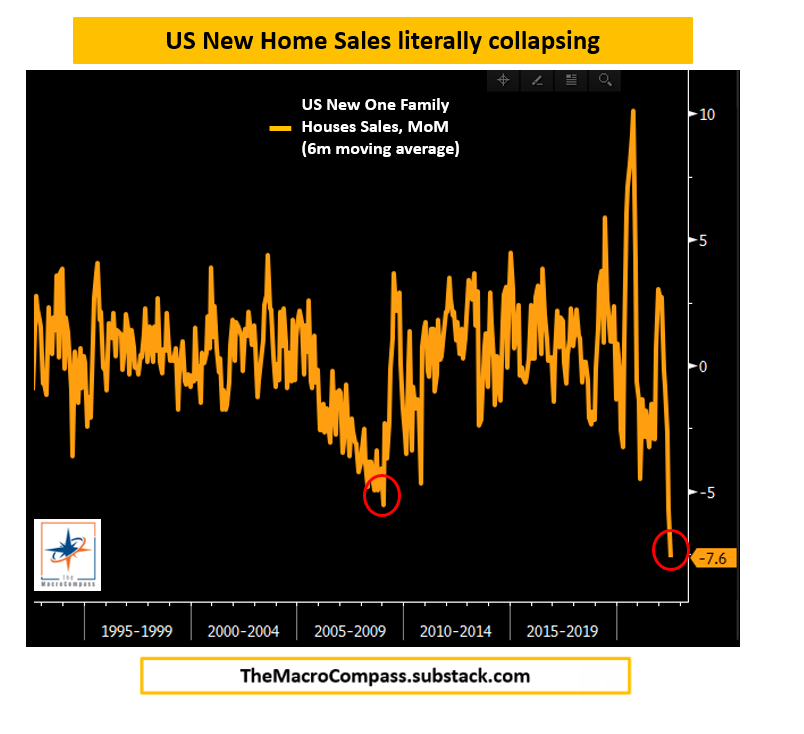 On the other hand, the share of mortgage payments in household spending is at a historically high level: in other words, this housing crisis has the potential to affect consumption, which is the main US economic driver, in a very significant way.

These dark clouds are probably pushing more and more central banks to increase their gold reserves again. Qatar increased its reserves by 14.8 tons in July 2022. India's reserves have increased by +36% in the last five years.

India accelerated its gold imports by 6.4% between April and June. Physical silver imports have tripled since last year. Never before has the country imported so much silver!

Gold exports from Swiss refineries are at an annual high in July. Taking advantage of the recent correction in gold prices, China alone imported more than eighty tons of the fine metal in a single month, a five-year high. 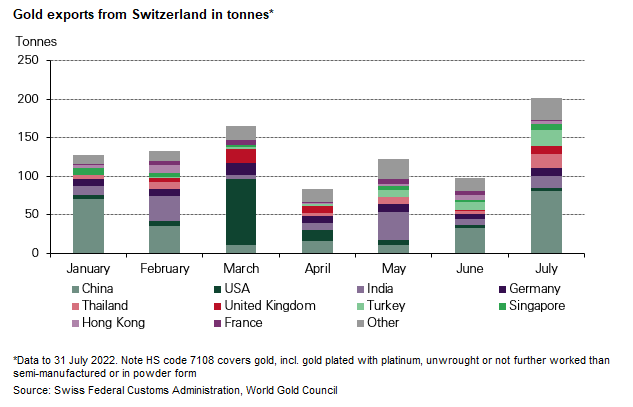 While the daily manipulations of the bullion banks allow a few participants to make substantial gains in the derivatives markets, the BRICs continue to get their hands on most of the available physical gold stocks, led by China.

Is this really the best way to prepare for the next currency war?