The markets are boiling. The S&P 500 has doubled in barely 18 months... an all-time record. Never before have the markets gained so much in such a short period of time: 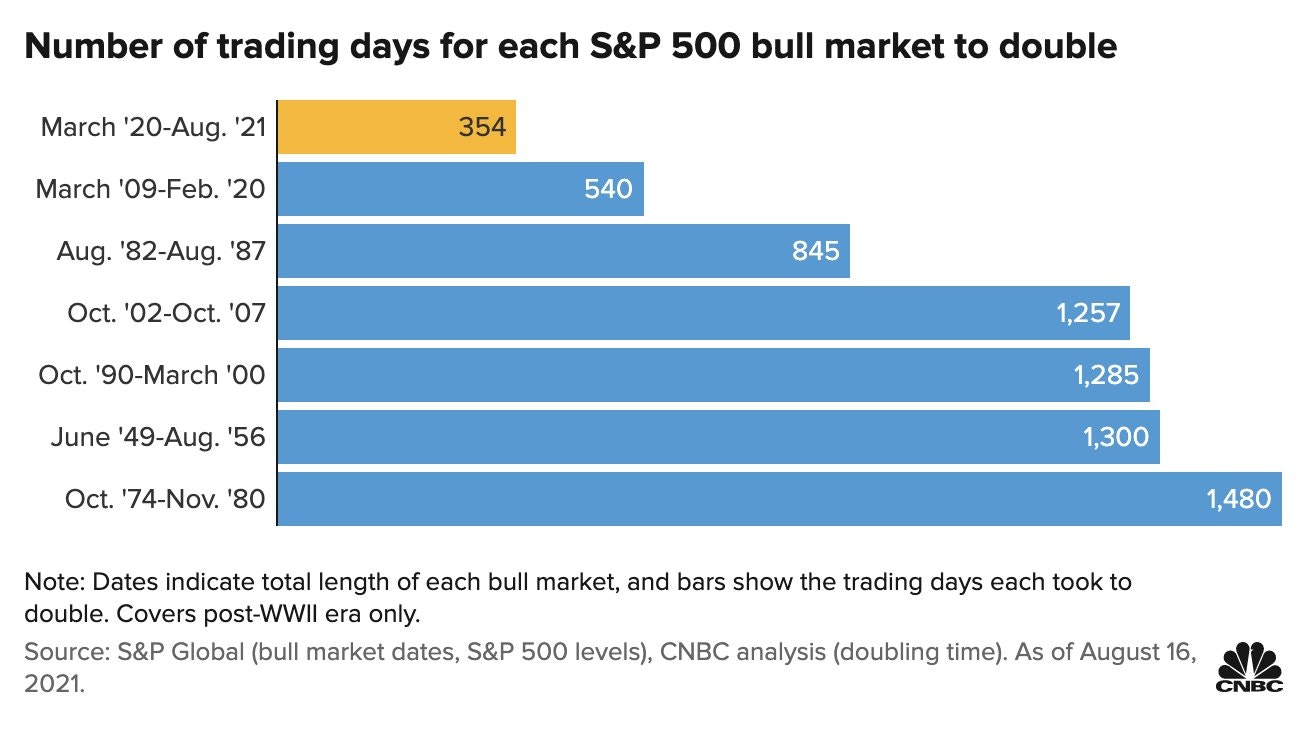 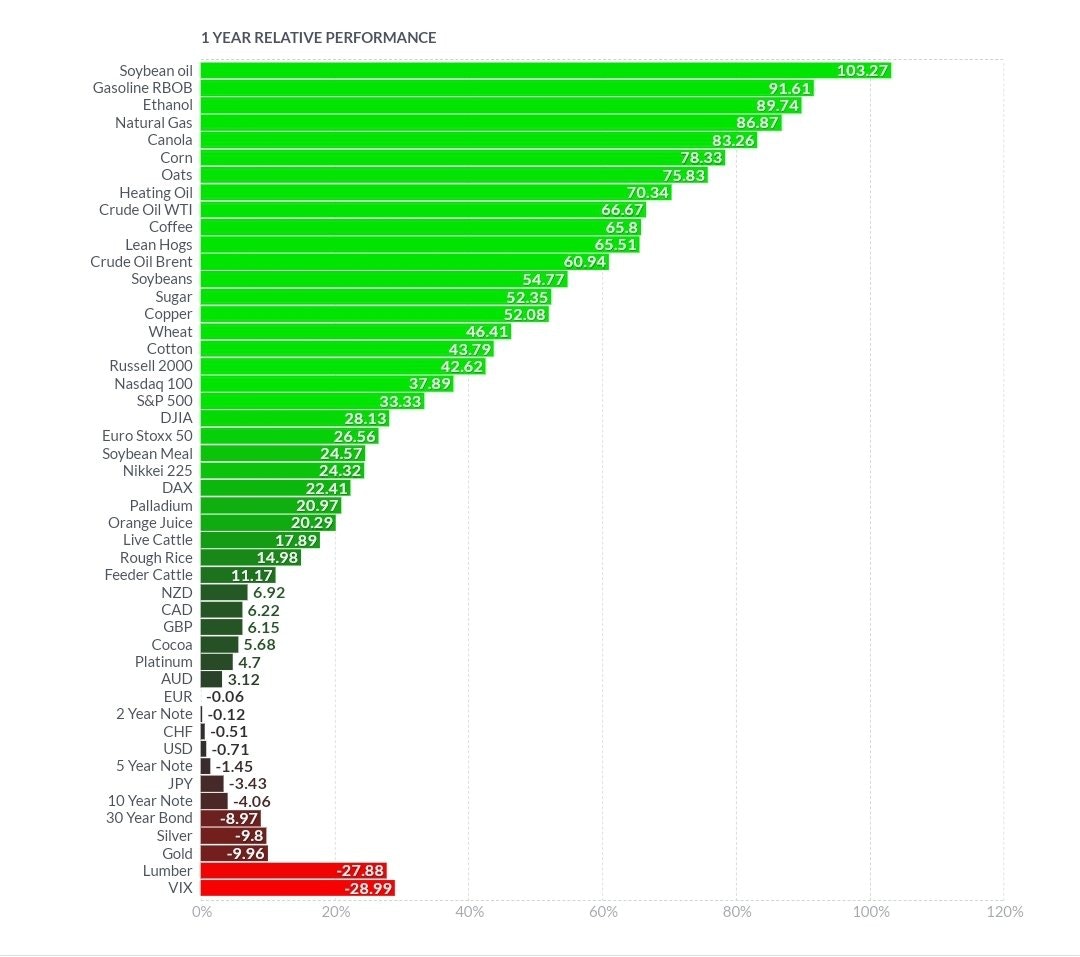 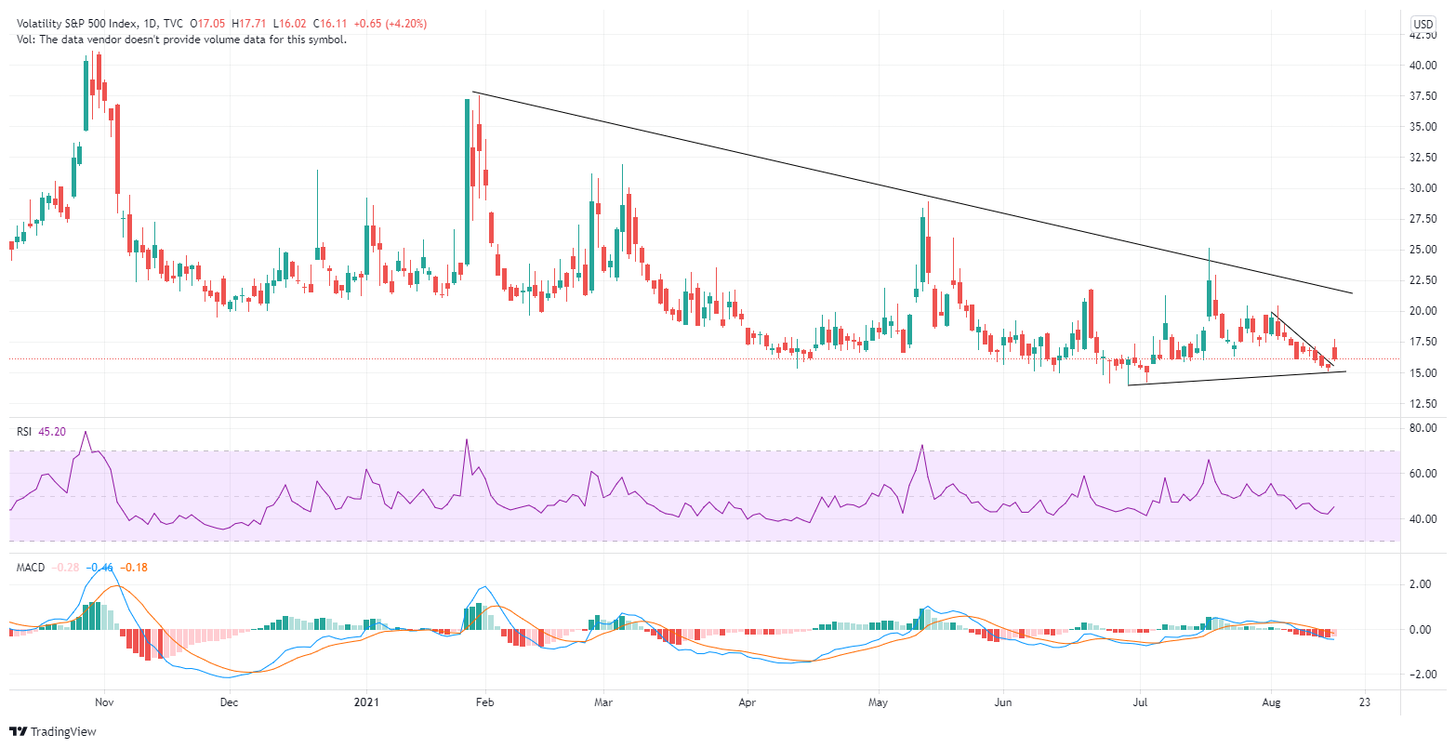 Gold and silver are yet to benefit from the rise in the prices of the other assets; they are thought of as a currency, and not as commodities. These low prices are a bargain. The retail sector is making the most of them, especially in the United States, where sales are at their highest since 1999: 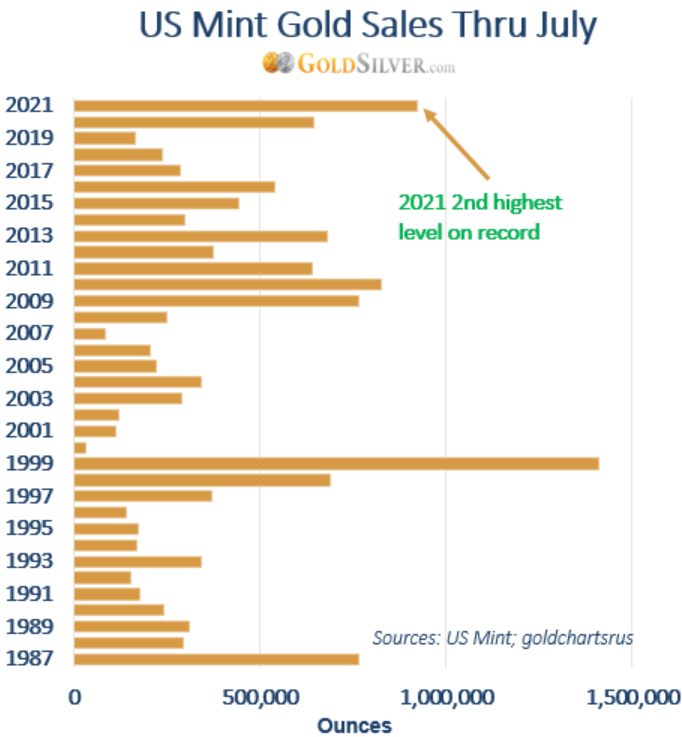 The central banks of the BRICs countries and the developing countries are also buying at record levels right now, in a real movement of defiance against the central banks of the Western countries. Given that inflation has taken off pretty much everywhere, with the central banks of the OECD contributing towards exporting this inflation all over the world, one would logically expect other central banks to be thinking about protecting their solvency and insuring against the nefarious effects of inflation on their balance sheets. It has to be said that the monetary policies being pursued have created a real headache for these central bankers. A quarter of the global bonds have a negative yield, and only a third of debt-linked products are still bringing in more than 1%. It is no surprise to see such a level of purchasing of gold, since it is one of the rare assets that is still affordable in 2021, a year when, decidedly, everything has gone up in price. It should also be noted that lumber has returned to its pre-crisis price levels, wiping out the impressive rise since March 2020 in its entirety. Lumber is the commodity on which advocates of transitory inflation rely to illustrate the announced return of falling prices. Unfortunately for them, it is a material whose price is very volatile and, moreover, it is very much the only thing that has gone back to a more or less normal price, with everything else being stuck in a continuous inflationary cycle. Those who will gladly talk to you about lumber are unlikely to say anything about cotton, which reached a 7-year high this week. This is often the way inflation spreads, incidentally: from one commodity to another, like a fire raging out of control on several fronts, and gradually devouring a hill. Those who believe in the theory of transitory inflation with such fervent passion increasingly remind me of the Gold Bugs from 2011, who thought that the successive rounds of Quantitative Easing would have an immediate inflationary effect. They are reasoning with tools that are linked to demand, and completely overlooking the monetary origin of the inflation. This inflation is fed by a headlong rush on the part of the central banks, which have increased their balance sheet by a factor of 8 in barely 10 years, by allowing almost half of countries’ debts to be monetized. The structural deficits of the countries are literally exploding, but apparently, this is no longer a problem for the central bankers. Janet Yellen warned in 2018, when she was chairman of the Fed, that the situation would not be sustainable for the United States, with a deficit of a trillion dollars. Today, this deficit has tripled, and Mrs. Yellen, who is now in charge of the country’s finances, no longer thinks that it is a problem. Even today, she is fighting for the country’s debt limit to be lifted for the umpteenth time. The markets are participating in this general rise in the price of assets, with the S&P 500 breaking one record after another since the start of the year. The inflow of fresh money into the stocks funds has broken another record, with a spectacular climb on the equity funds. 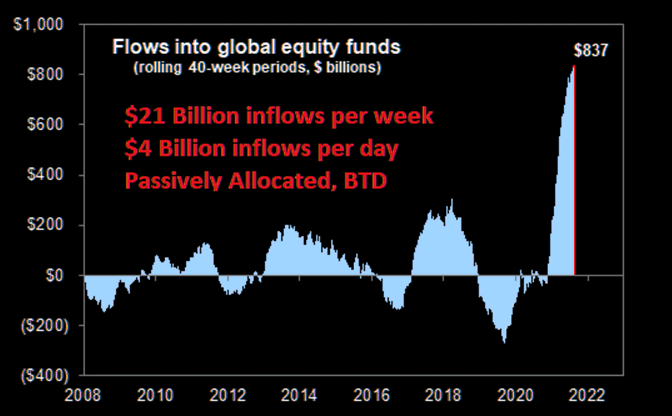 With the big comeback of inflation, the markets are now very expensive, with the S&P 500’s real earnings yield plunging to values not seen since 1980... 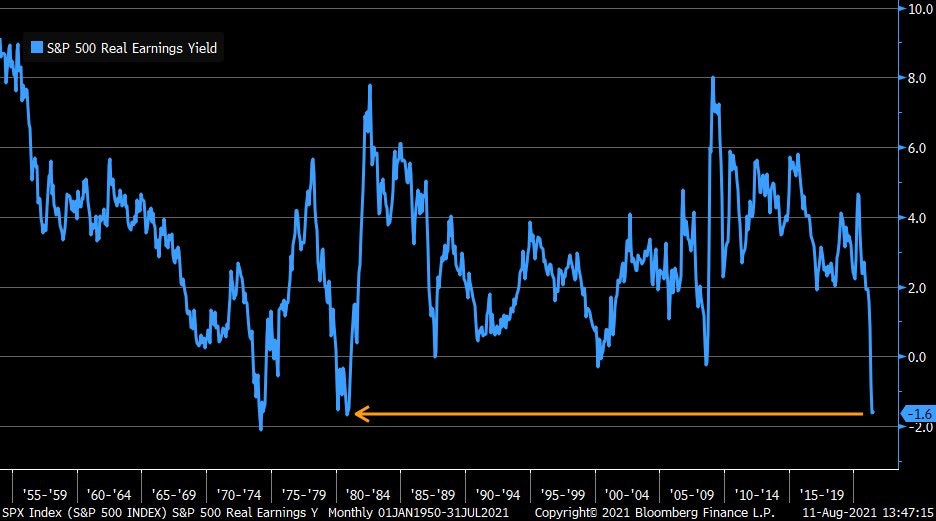 The stock market capitalization of companies, which are paying themselves more than 20 times their sales, is at an all-time high. 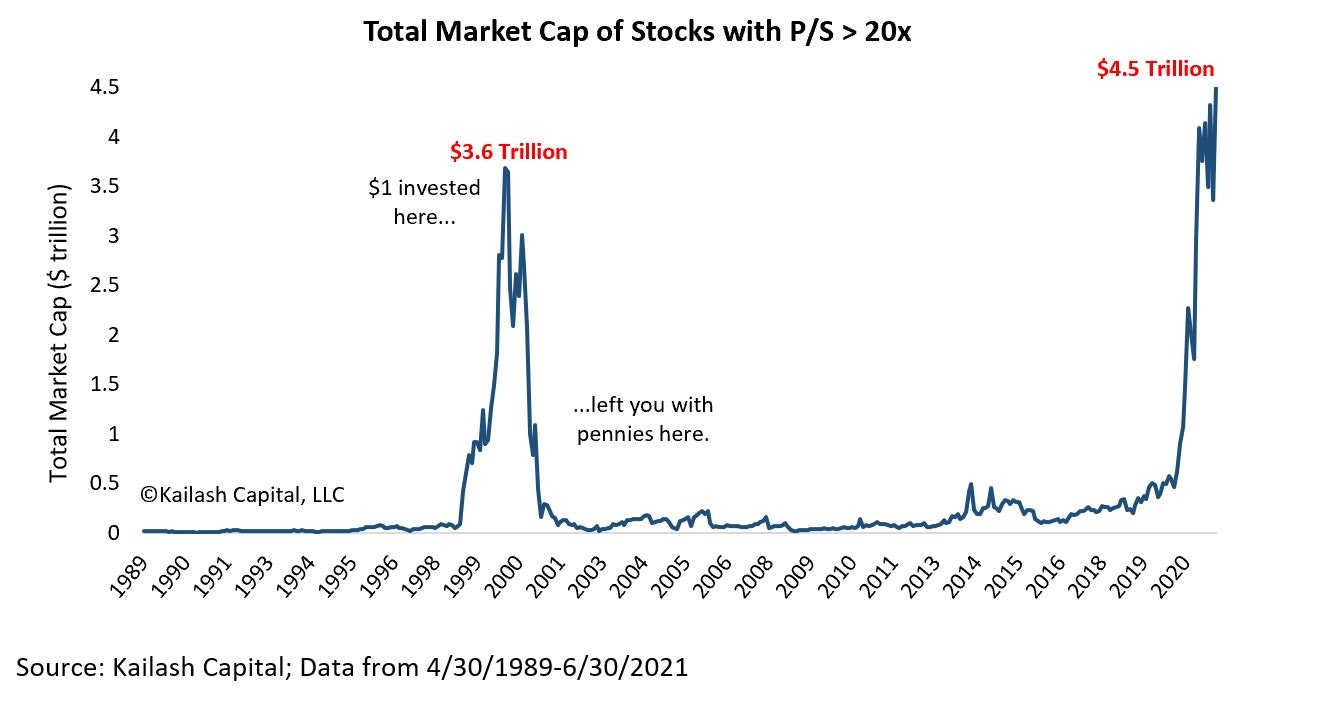 It was this indicator that sounded the alarm bell during the Internet bubble in 2000. On some equities, the level at which alarm bells should be ringing has already been far exceeded. The market is paying some companies for 40 years of stellar results, at a time when the latest figures for intentions to purchase, published by the University of Michigan, are falling to levels not seen since 1980. The rise in prices has abruptly put the brakes on intentions to buy houses, vehicles and large household durables. 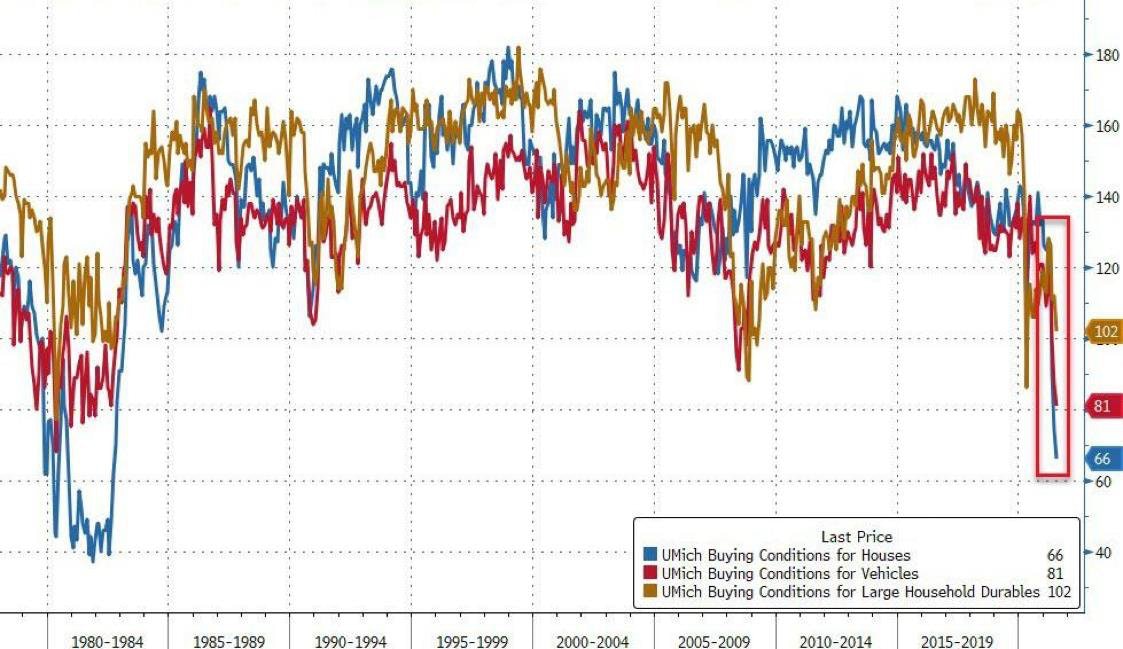 Without a fresh stimulus, demand is at risk of collapsing... yet the market is not anticipating this reversal! The market is in a bubble. The mining stocks, conversely, have a case of the blues. Weathon Precious Metal has published some historic results: a rise in production of 32%, $1/4 billion of net cash flow this quarter, a dividend that is up 50%; the equity is stagnating. I don’t know when the awareness will come that this sector is undervalued by comparison with the rest of the market. I don’t know when the real rise in precious metals will begin or what the trigger for it will be. All I know is that, in terms of the charts, the fall is limited, the exit door for the markets is minuscule, and the entrance door leading onto the mining stocks is even smaller. The accumulation period for certain equities is ending, as we measure the volumes that are finally starting to come into play.